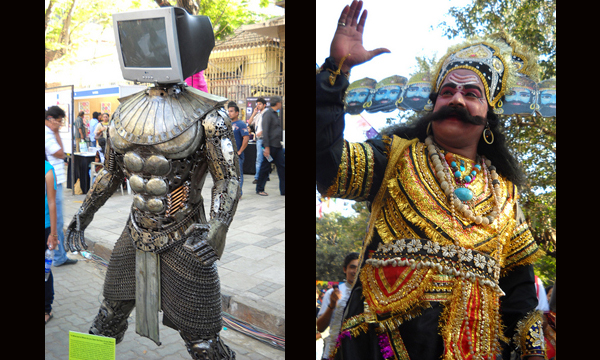 “To What and To Whom Do You Open the Door Of Your Mind,” Scrap Metal Sculpture by Ilyas Ahmed (left). Demon King Ravan (right). These and all photos are copyrighted to and courtesy of Sumiit Lakhutia.

As the fast paced commercial capital of India, there are very few sights in Mumbai that cause people to give a second glance.

Some exceptions to this rule might be seeing Ravan (the Demon King from the epic Ramayana) and Mughal Emperor Akbar.

Or how about an Ambassador (India’s pre-’80s iconic car) covered in silver glitter, an Indian warrior metal sculpture with a computer monitor for a head, or a statue of a cow painted with Gods, Goddesses, and Bollywood stars?

If you happen upon these sights, you’re at the Kala Ghoda Arts Festival. 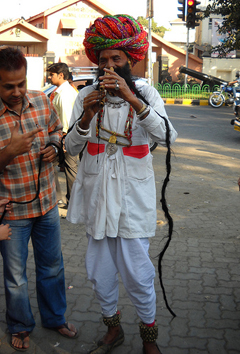 The longest mustache in the world?

It’s one of Mumbai’s biggest art and culture festivals. Kala Ghoda (a precint of Mumbai) houses numerous art galleries, restaurants, educational institutions, and the best of Mumbai’s heritage buildings. The pleasant, cool weather (18º to 32 º Celsius, 64º to 90º F) this time of year is a bonus.

Even the area is named for a piece of art. In 1879 a bronze statue of King Edward VII (then Prince of Wales) on his horse was installed in the centre of the place by a Jewish businessman and philanthropist, Sir David Sassoon.

Over time, the statue turned black and the locals found it easier to identify the location by calling it Kala Ghoda (Black Horse). Even though the statue was removed in the 1965, the name stuck.

The festival is comprised of ten categories: Children, Dance, Film, Heritage, Literature, Music, Street, Theater, Visual Arts, and Workshop. In an attempt to get the common man closer to arts and culture, none of the events have an entrance fee. They are only limited by venue capacity.

Aware that the Festival would draw a huge crowd on a Sunday evening, I decided to go in the early afternoon so I could walk through at my own pace without being jostled or crowded. Unfortunately, many others also seemed to have the same bright idea. 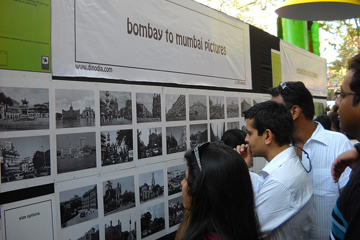 Viewers check out Bombay to Mumbai.

As I slowly made my way through the mass of people, I contemplated whether to pick up an organic cotton t-shirt with the caption “Somebody gonna get a hurt real bad – Russell Peters” from the Sheepstop counter, a colorful, handcrafted bag for my mum from an NGO stall, or some photos of Mumbai from an era gone by, at the “Bombay to Mumbai Pictures” photo exhibition.

Nearby, in the Museum grounds, Milind Gunaji read from his new children’s book “My Unforgettable Trip.” It’s a concise 40-page book about the Forts of Maharashtra, with incredible photos and was enjoyed by the children present. 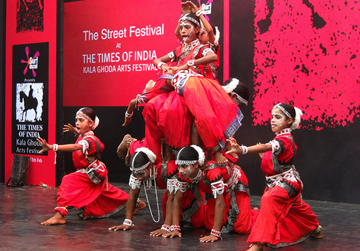 Later on, I got a chance to view the Gotipua style of Folk Dance, being performed at Rampart Row Street. Starring young boys in female attire, the dance depicts scenes from Indian mythology.

The highlight of my evening was taking in some stand-up comedy by Sorabh Pant and Kunal Rao at the Artist’s Centre. They were so funny no one seemed mind the shortage of seating at the packed venue.

What Else is Going On?

Here are some of my picks for other interesting events yet to happen at the Kala Ghoda Arts Festival this year:

What: Film, Udaan, 2010 (155 mins) Hindi
Where: Max Mueller Bhavan
When: 3PM – 6PM
Winner of 7 Filmfare Awards (The Indian Film Industry’s equivalent of the Oscars), Udaan is a movie about a teenager, Rohan, who lives with his authoritarian father and works at his steel factory. While Rohan wants to follow his dream of being a writer, his father wants him to pursue engineering. The film deals with Rohan’s struggle.

What: Heritage , Walking on the Footprint of The Fort Walls
Where: Start Point – Flora Fountain intersection.
When: 4.30PM 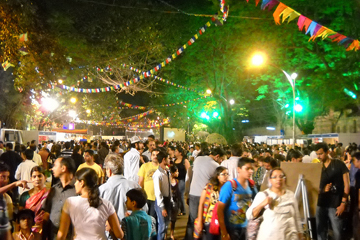 The festival by night.

The central commercial district of Mumbai is called Fort, referring to the fort built here by the British in the 18th century, and later demolished in 1862.

This walk will take you along the path where the fort wall stood, taking in the mix of heritage monuments and modern Mumbai structures along the way.

What: Workshop, Raga to Bollywood,
Where: Artists Centre
When: 11AM
A workshop on Indian Music, with an introduction to Indian Classical Music, the Science and Art of Indian music and a short demo on the violin with the Indian percussion accompaniment of tabla.

What: Music, Nirala Kabir by Gundecha Brothers
Where: Asiatic Steps
When: 6:15PM
Umakant and Ramakant Gundecha are one of India’s leading exponents of the Dhrupad style of music. Catch their presentations of songs and compositions by the two famous poets Niladri and Kabir.

What: Literature, Poetry Slam (multilingual) Organized by Caferati
Where: Museum Gardens
When: 7.00 – 8.50PM 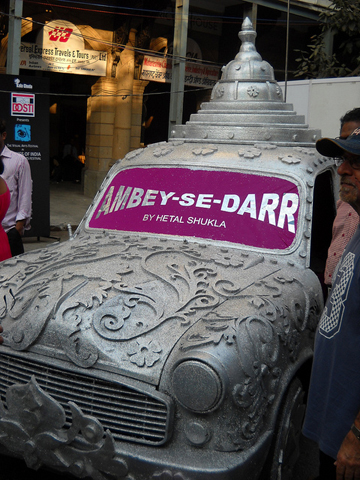 Ambey-se-Darr by Hetal Shukla. Ambassador was the icon of
Indian automobiles up until 1980 (enter Suzuki).  Hetal Shukla
plays with the name, spelling it to say ‘Ambey -se-Darr’ (which
means, “Afraid of the Goddess Durga” in Hindi).

Poetry Slam reaches out to the masses. Poets are judged instantly by a panel of practicing poets and audience members, with eliminations taking place and a winner declared.

What: Theater, Improv Comedy
Where: Artists Centre
When: 7.00 – 8.00PM
Improv Comedy is gaining popularity in Mumbai. Keeping up with the times, the Kala Ghoda Arts Festival is having a performance by the Improv Comedy Group.

What: Visual Arts, Bombay to Mumbai (Photo Exhibition) Abhishek Gupta, Tuka Karve & Vishwanath Mishra.
Where: Pavement Gallery
When: All through the Festival

What: Visual Arts, Tribute to the Lost Souls by Shreyas Khanvikar
Where: Horniman Circle
When: All through the Festival
A sculpture that pays respect to all the people who have died in terrorist attacks, in the last 5 years.

A complete list of the events is available at http://www.kalaghodaassociation.com.

It Almost Didn’t Happen This Year

This year the event was almost cancelled. Kala Ghoda has been declared a silent zone as it houses 2 religious establishments in its vicinity (the Knesseth Eliyahoo Synagogue and the St. Andrew Scottish Church) as well as the High Court, City Civil Courts, and the Sessions Court.

Therefore, holding open air performances and events would lead to a violation of the permissible noise levels. But the organizers have reached a compromise with the Municipal Corporation, wherein they will not be using any loudspeakers for the performances. Instead all the major music and dance performances have been shifted to a new location (Horniman Circle).

Having crossed this hurdle, the show is now underway, bigger than ever before, with 400 odd events taking place over the period of 9 days.

If you’re in India at another time of year, there is still more to check out on Matador to get your week, month, or afternoon planned. Check out our India focus page for tips about eats, reads, and heritage sites to visit and more.

And if you’re going in summertime, don’t be bummed. Instead, check out Matador Trips’ 11 Reasons to Visit India in the Summertime.

Tagged
Art + Architecture Festivals Mumbai, India
What did you think of this story?
Meh
Good
Awesome