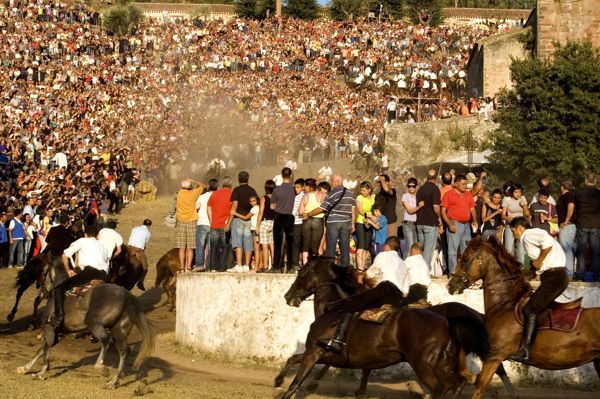 All photos by Angela Corrias.

Sedilo is a characteristic farmer’s hamlet, quiet except during the three days devoted to St. Constantine, when riders take on one of the most dangerous races in the world.

Like every year on the 6th of July, Sedilo’s top horse-riders charm both locals and tourists gathered around the tiny, pastel-colored sanctuary devoted to St Constantine. They’re here to watch this audacious show, known as S’Ardia. 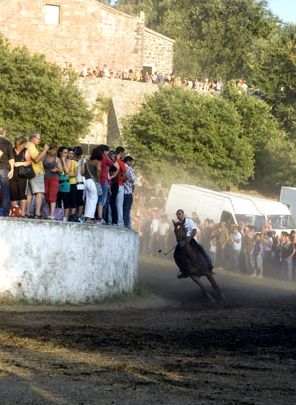 The undisputed stars of the festival are the first three horse-riders. The leader, Sa Prima Pandela (The First Flag), embodies St. Constantine and has the responsibility of bringing his gold colored flag to the sanctuary. He’s nominated by Sedilo’s parish and appoints his “generals” the second and the third flag (Sa Segunda Pandela and Sa Terza Pandela).

The three Pandelas together designate their three “escorts”, who hold batons they fiercely guard from the rest of the swarm that symbolize the enemies and try to pass the Emperor. There are no winners or losers, but testing the edge of legal security measures works as a reputation booster.

Gathered at the leader’s house, the horsemen head for Piazza di Chiesa (Church Square), where the parish gives them his blessing and officially starts S’Ardia. Anticipated by a line of riflemen, the riders flaunt a plucky self-confidence in the saddle and, proud in their faultless white blouse and typical black trousers, parade through Sedilo towards the sun-soaked field crammed with pilgrims. 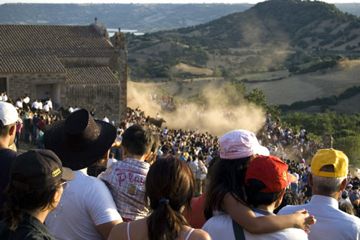 Waiting for hours in the Sardinian summer sun, onlookers are overwhelmed by dust and the intense smell of sweat, horses, and gun powder. The initial moments are the most dangerous. This year, a 44-year-old rider fell off his horse and died.

Arguments rage all year over the need for stricter security, but the prospect that S’Ardia might be banned is beyond imagination for participants and residents alike.

Matteo, 29, who’s been running S’Ardia for twelve years, explains, “Only we Sedilesi understand S’Ardia and are not asking anybody else to comprehend. We are fully aware of the danger of the route, that’s why we train – for our own and the other riders’ safety.”

Sedilo’s horsemen are renowned throughout the island for their ability. Matteo devotes his free time to training and looking after his horses. “For me running is an act of faith towards St. Constantine,” he says, “but also love and passion for horses.” 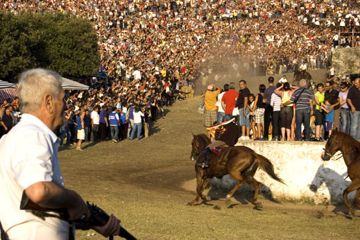 Giulia, 20, one of the two women running S’Ardia, spells out the plain truth. “Yes, there are risks, but we all are aware of the danger we face when we decide to run. Before sitting in the saddle I feel nervous, but once on the horse I don’t think about anything. At the end the only regret is that it’s already over.”

Cristian Chessa, an expert of Sardinian traditions, says, “I don’t think the bill will help prevent accidents, and I find it rather confusing when it compares clandestine competitions to religious events, ignoring that these don’t take place for entertainment or tourism, but to make a vow.” He insists, “Security rules shouldn’t violate the essence of S’Ardia, and the only way to do this is to leave the burden up to the Sedilesi themselves.”

Similar horse races take place in other villages, but when I mention that to Lino, he smiles patiently and adds,“Don’t be ridiculous. Others might even try their best, but the real Ardia can only happen in Sedilo.”