The where, when, and what to bring for Spain’s best parties.

Spain, land of eternal fiesta and much needed siesta. Eating dinner at 10 and sleeping two hours midday has long been Spanish custom. Every month of the year boasts a festival, or feria, in Spain. Keeping up with these year-round festivities can be exhausting, but it sure is a lot of fun. Here’s a guide to the 5 best.

In February, Carnival takes over every part of Spain. Carnival is the blow-out party before Lent and Easter. The Canary Islands and Mediterranean are prime places to experience it. Expect a week of parades, costumes, drinking and dancing.

When: Festivities begin in February, 45 days before Easter.

Where: Sitges in Catalonia (a gay tradition) or Gran Canaria in the Canary Islands or Cadiz

What you need: A costume and perseverance: this party lasts all night long. 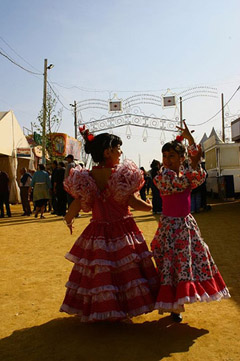 People start to get a springtime buzz when March rolls in, and celebration is ceaseless. Las Fallas is a fire festival in Valencia. If you are a pyromaniac, you should be at Las Fallas, no exceptions.

Of course, it’s also interesting for the average person who wants to take his life into his own hands and wander burning streets and amidst whizzing firecrackers. Watch the head!

The good people of Valencia spend the better part of a year building wonderful sculptures made of wood and paper mache, which are giant in size and remarkable in beauty, only to burn them to the ground between the 15th-20th of March. It’s like the Rose Parade bu the floats are staues–some up to 70 feet tall–and everything is torched at the end of the week.

Some say this is the best feria in Spain and is not one to miss.

What you need: A lighter to participate in the festivities and a camera to capture the amazing images of el arte en fuego

Right after Las Fallas is Semana Santa, which may be Spain’s most famous feria after San Fermin (The Running of the Bulls) in Pamplona. Semana Santa or Easter Holy Week is celebrated everywhere, but most spectacularly in the south of Spain.

A week-long celebration, Semana Santa involves daily processions depicting the death and resurrection of Christ. This is a religious festival which is a dazzling visual spectacle for believers and non-believers alike.

During Semana Santa, intricate alfombras, or carpets made of flowers, are crafted by locals only to be trampled by thousands of feet during the day’s next procession. Especially in Sevilla, you’ll have a lot more fun if you have a couple Spanish friends whose families get cabanas (where much of the party, music, drinking and dancing unfolds), otherwise you’re just wandering the streets. 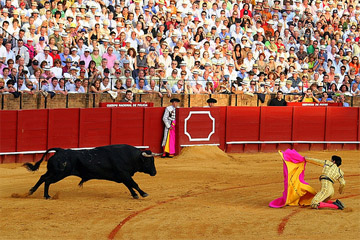 Where: Andalucia (Granada or Seville)

What you need: A camera and Spanish friends with a cabana.

So many parties in March will surely make a visitor weary and hungry. Lucky for you, during the entire month of March Catalonia celebrates its Calçots festivals, or Onion-fest.

Calçots are young green onions which the Catalans grill on a barbecue and then dip in a red Romanesco sauce. These slippery but tasty onions are eaten whole, and the experience is both delicious and messy. Calçots can be sampled (usually with a full course lunch) any time in March and early April.

What you need: A bib and an appetite.

In Menorca, the party is a bit more subdued and the focus is more on the horses than fire and beer.

Summer equinox, June 24th, marks Sant Joan’s Day. A pagan holiday, Saint Joan has long been a favorite along the Mediterranean. Today it’s best to visit Barcelona or Menorca for this all-nighter.

In Barcelona the young and old (but mostly the young) head for the beach. This is the only night of the year where it is permitted to sleep on Barcelona’s public beaches. Fires are lit and people sing, dance and drink into the wee hours of the morning.

The city puts on a grandiose fireworks display and citizens create their own pyrotechnic shows in dangerous proximity to passers by. It is a wild party.

In Menorca, the party is a bit more subdued and the focus is more on the horses than fire and beer. Menorca is famous for breeding beautiful horses, and during Sant Joan, Menorcan horses and riders participate in parades and games with villagers gathered from all around the island to watch and cheer them on.

Where: Barcelona or Menorca (Balearic Islands)

What you need: Barcelona: a lighter, a bottle and a guitar. Menorca: A hotel in Ciutadella and a love for cultural traditions.

Perhaps the most famous of all ferias in Spain, San Fermín is a week-long party that is both raucous and relentless.

Perhaps the most famous of all ferias in Spain, San Fermín is a week-long party that is both raucous and relentless. You have never seen people party this hard, for this long.

Tens of thousands descend on the sleepy mountain town of Pamplona for this single week and the experience is not for the light-hearted. Prices soar and it’s very difficult to find an affordable place to crash even if you plan ahead, far in advance.

The party is all consuming, with loud music blasting out of every hole-in-the-wall bar, on every street. People drink like there’s no tomorrow and when the sun begins to rise, the cops literally have to kick people off the streets to set up the fences that keep the furious, confused bulls on their course to certain death.

Many sleep in the park but due to the elevation, that can be cold and wet and opportunists lurk. You might be better off wandering the streets until dawn–but don’t drink too heavily if you plan on running. The danger is real and other runners are just as dangerous as the bulls themselves.

Seasoned runners will all tell you the same thing: “look out for number one.” All the danger and party scum aside, 24 hours in Pamplona during San Fermín is something you will never forget.

Where: Pamplona (best reached via train from Madrid)

What you need: A camera, a place to crash, and some tightly-laced Nike running shoes

Matador is bursting with cool people who are currently living in Spain and/or experts on the nightlife there! If you’re looking for more info on Spanish ferias–or just general advice about partying in the world capital of nightlife, just reach out to the community.

In Madrid, you can count on Abha or Brian–or scan this underground guide to bars and clubs of Madrid. If you’re headed to Barcelona ask Doug, Khobi, or Georgia, what’s going on that weekend. Down south in Andalucia you can reach out to our Seville experts, Jon and Emily.

Tagged
Festivals Spain
What did you think of this story?
Meh
Good
Awesome

The 5 best food markets in Madrid

Iconic Barcelona architecture that you can check out for free

If you only go to one neighborhood in Madrid to eat, make it Malasaña