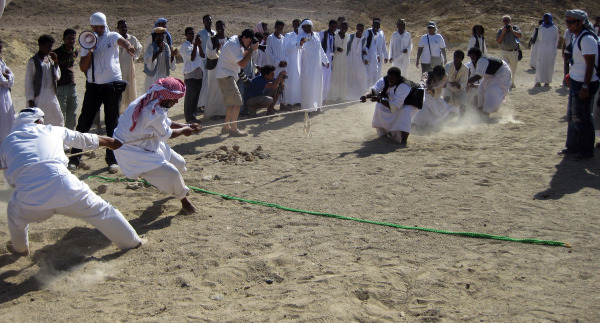 The ancient tribal endurance competition “tug of war.” This and all photos: Nick Rowlands

The second Characters of Egypt festival took place in Wadi El Gemal – an isolated national park in the South-Eastern Desert – between October 29th and 31st, 2009. Promoted through a slick-as-snake-oil website and a Facebook group, this was a tribal gathering for the 21st Century. Bus-loads of Bedouins from all over Egypt were brought down to the site, and the press were out in force. 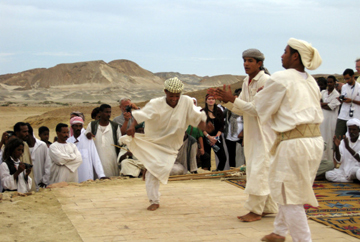 Something a little more traditional.
This and all photos: Nick Rowlands

This would have been great, had the event been organised in any way at all, but nobody had a clue what was going on.
The programme might as well have read:

Wander aimlessly around site, homing in on any gathering of more than four people.

Hope to be fed at some point.

Many of the advertised events never happened. Others took place at random times and in random locations, as if some capricious desert god were rolling the festival equivalent of love dice. Entire museums, and even a whole tribe, appeared to have been mislaid.

It’s hard to tell if the festival was deliberately misrepresented, or organised by a bunch of ADD stoners who really believe there’s a devil in the details, and so decided not to bother with any.

The first day in particular was a nightmare – a genuine press feeding frenzy. This international bunch of rapacious vultures were thrusting their cameras in the face of anyone wearing a headscarf, pecking and screeching at each other as they fought for their ultimate tribal dancing money shot.

It was embarrassing, and stank of condescension with fruity undertones of colonialism. The lack of cultural sensitivity was astounding. During the communal Friday prayers, one hack – equipped with a telescopic penis extension so large it had to be strapped to his body like a suit of armour – filmed the proceedings from a distance of all of six inches. 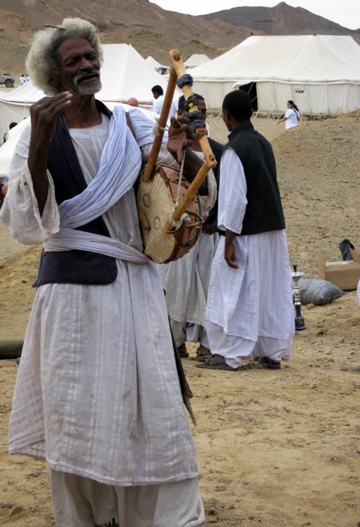 One character of Egypt.
This and all photos: Nick Rowlands

Blithely wandering up and down the rows of the devout, he looked like he wanted to conduct the prayers himself.
The tribesmen responded to this with a mixture of amusement and disdain. One young boy summed it up perfectly, saying, “I don’t understand why they are here. Every time we do something, they put their camera on us. I want them to go away.”

The corporate nature of the event is also questionable. Apparently, it’s perfectly OK to have an eco-tourism festival whose official sponsor is Aboul Fotouh, a company “considered a pioneer in the automotive industry in Egypt.” (Their words.) I know we live in a cynical world in which the harsh realities of money trump ethics, but isn’t that like having Monsanto sponsor the local farmers’ market? It was particularly disappointing since the Wadi El Gemal camp and Science Center are involved are a number of environmental and social responsibility projects.

These days, when any yin-yang can chuck up a tent in the middle of nowhere, light a few candles, label themselves “eco” just to watch those green dollars roll in, organisations like this have a responsibility to walk the walk.
Just picking up your rubbish doesn’t cut it. If practicalities prevent you from installing things like composting toilets, biogas generators, or solar water heaters, that’s understandable. But cosying up with a car manufacturer, Egypt bloody Air, and Dasani not-so-mineral water, is just plain wrong. 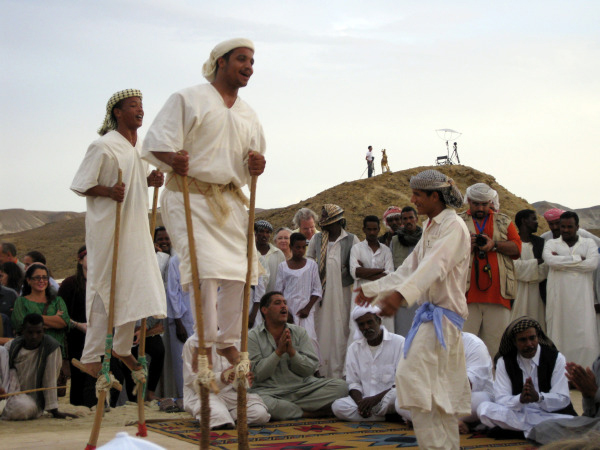 Siwi Stilt Dance This and all photos: Nick Rowlands

Another big festival selling point was the tribal games. They were like a surreal school Sports Day arranged by a bunch of eleven-year-old anthropology students. 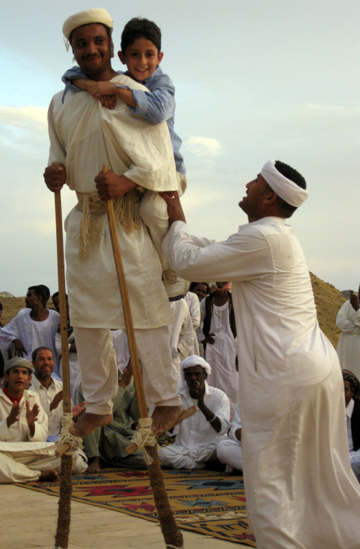 The ancient tribal perambulation: The Piggyback
This and all photos: Nick Rowlands

Over the three days, seven teams competed in such traditional bedouin sports as long jump, high jump, and tug of war. The only thing missing was an egg-and-spoon race. (The eggs were needed for dinner. We got one each, and a plate of cheese.)

The camel race, however, was as bedouin as it gets. Magnificent beasts thundering through the desert at speeds of up to 50 km/h, their riders urging them on with whips and improbable noises. A pity no one bothered to tell us it had started. The first anyone knew of it was when the winning camel sailed over the finishing line, breezed through the camp, and settled down in its paddock for some post-race rumination.

On the other hand, finding the tribal dancing performances was easy: just zoom in on the mesmerising blend of pulsating drum beats, enthusiastic clapping, and haunting, ethereal melodies. The issue here was that you couldn’t see anything through the melee of cameras and microphones.

The funny thing is, with the exception of the local Bashariya and Ababda tribes, everybody at the festival was a tourist. Lots of the bedouin (from South Sinai in particular) have made a mint through tourism, and sport the latest iPhone or digital SLR with as much pride as their traditional dress. They were as snap-happy as everyone else.

Interestingly, many were as fascinated by the journalists as they were by the other tribes, and delighted in taking photographs of them. Bedouin taking pictures of journalists photographing bedouin…welcome to the postmodern world of the tribal nomad! 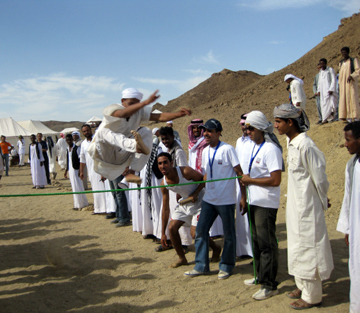 A Particularly Impressive High Jump
This and all photos: Nick Rowlands

Despite all the problems and inconsistencies with the festival, it’s important to say we did have a good time. It was cool to meet and interact with tribesmen from all over Egypt. The evenings were brilliant, as each tribe gathered around a fire in their own camp to sing, dance and play music which was much less contrived than the staged performances of the day.

People were fire-hopping from camp to camp, seeking out the best parties. As the organisers, tribesmen and other tourists all came together, the imposed “event” became a shared celebration. It was in this space that the festival came closest to fulfilling its vision of “peace, generosity of spirit and mutual respect.”

Here’s hoping the organisers get it right next year.

Tagged
Festivals Egypt
What did you think of this story?
Meh
Good
Awesome