YOU’RE TRYING TO wrap your head around how little the back of your station wagon looks when it’s stuffed to the gills with all of your supplies…some perhaps not as necessary as others. You may have spent weeks pouring over “festival fashion” Pinterest boards or watching Coachella interviews. But in reality, all that glitz and showmanship — the plastic flower crowns that will exist in a landfill long after you and I are gone, the $50 tank tops that 20 other girls will be wearing, the hot new Ray Bans that are probably going to get sat on — that’s all noise.

When it comes down to it, you just need the basics of survival. It’s supposed to be about the music, not what you look like for three days out in a muddy field. So pull out the suitcases, reevaluate the trunk space, and cut it down to the bare essentials. 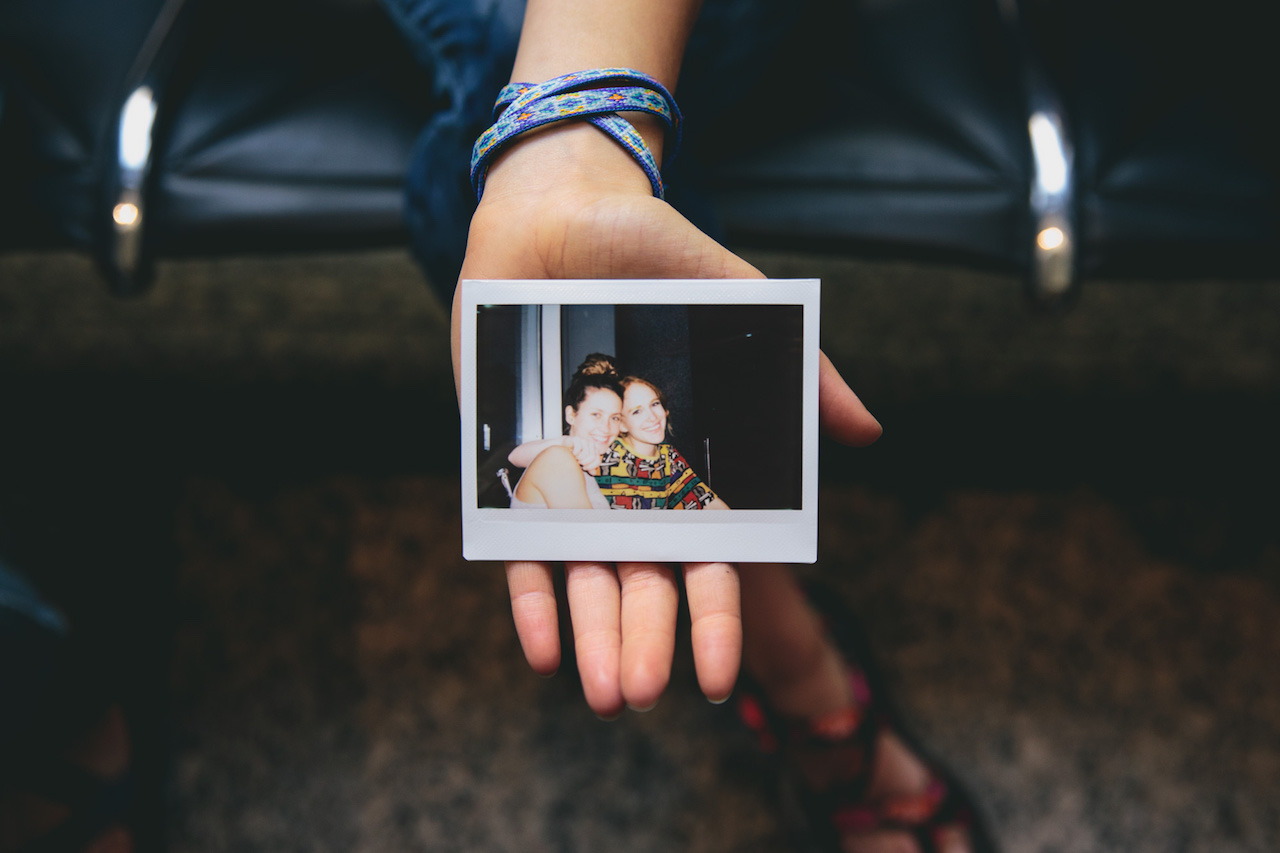 Yup, you’ve probably got an iPhone and it probably takes excellent photos, but hear me out. This should be a weekend of no screens. Remember when you just had to snap a photo and pray the lighting was at least adequate enough for the subject to come out? Remember when you had to wait — sometimes even several weeks — to see the photos you took? And you had to pay 12 bucks to get them in physical form? By that time you may have forgotten what you shot, so getting the roll back was all the more exciting.

I’ve always been an advocate for the disposable camera. I still have cameras lying around from four years ago that I’m waiting to develop. I love that feeling of not being able to check how I look, of being selective of what I shoot because I only get 24 chances. Yeah, the shots are a little grainy, but they’re a moment and nothing else. 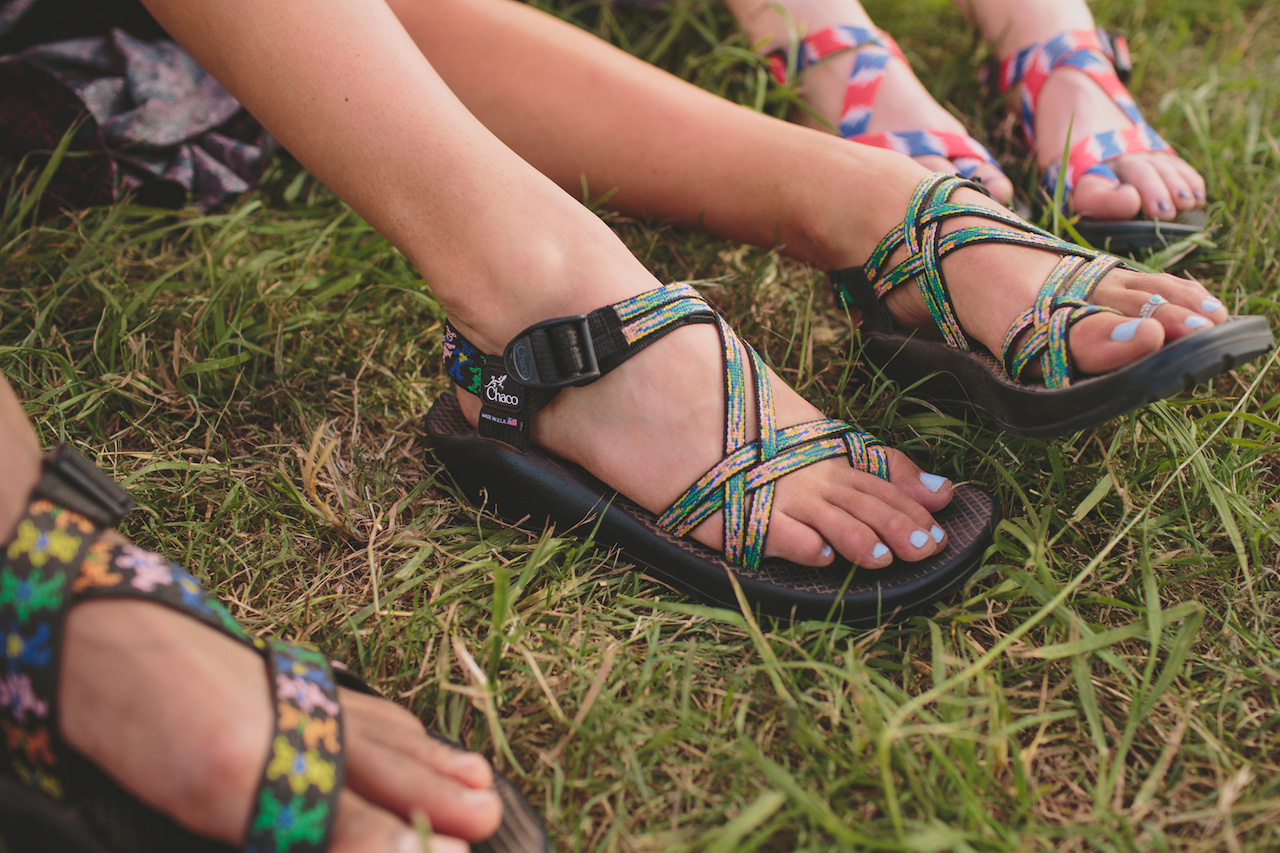 Please don’t go in flip-flops. Please don’t go in leather boots. You’re going to lose the flip-flops in a foot-deep mud puddle and die in the boots. You need a pair of shoes that are going to cling to your feet in those moments when the rain is storming down and you’re holding the shoulders of 10 other strangers while a 12-year-old girl transcends reality on her fiddle.

In my experience, Chacos might be the only shoe that can do that. They’re comfortable, they even give you a little bit of height, and there are plenty of colors and designs to pick from. I guess you could clunk around in some rubber boots too, but the best part about dancing in the mud is feeling it squish between your toes. 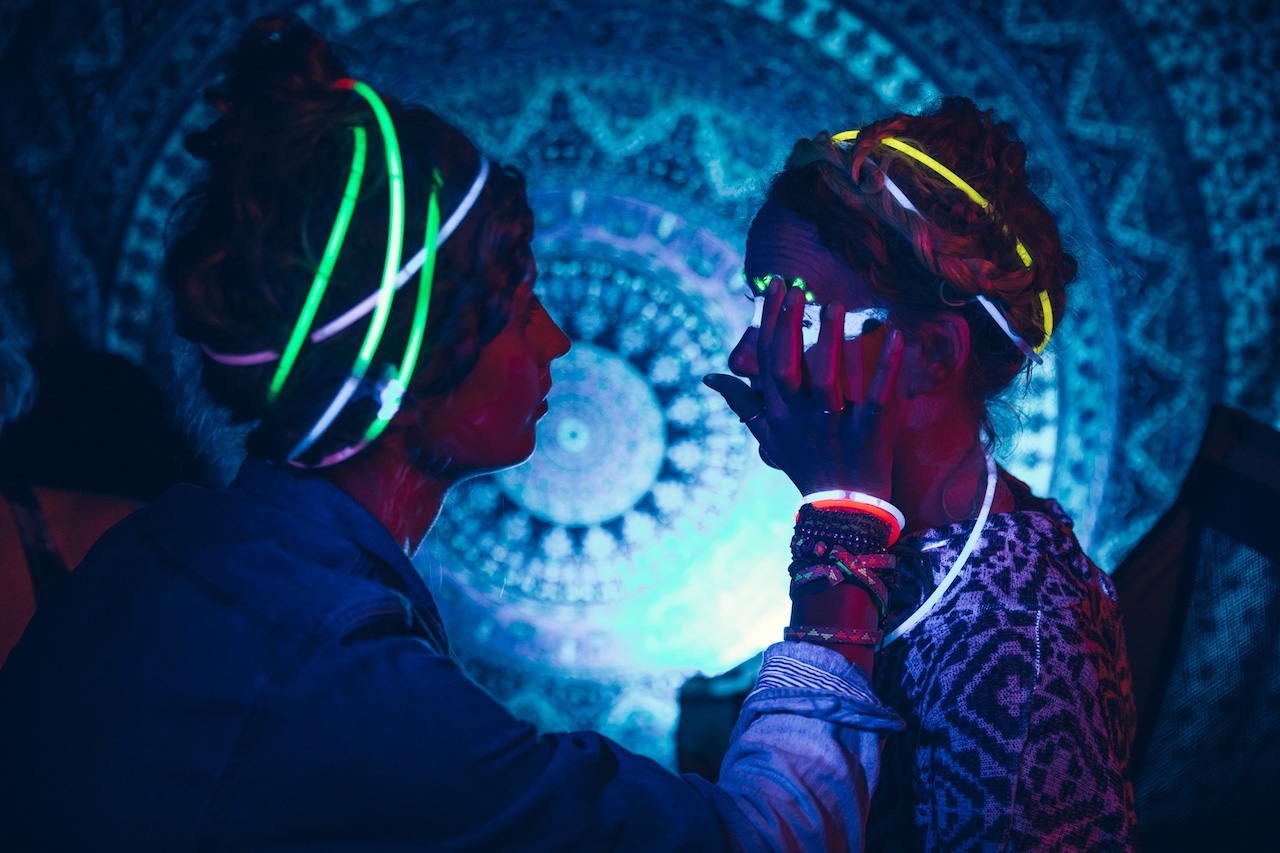 There’s something to be said about props and costumes at music festivals. Festivals don’t feel like real life; the environment offers us all the comfort to get a little strange. Maybe you work at a grocery store in rural Alabama, but you’ve always been a little interested in dressing in drag. Maybe you experiment with paper mache when you get the free time and this is your chance to put it on display. Maybe you used a Youtube tutorial to make a skirt out of neckties, but it doesn’t make sense to wear it back home. Or maybe your true identity is a fox with laser-beam fingers.

At a festival, you do you. All I ask is that you don’t do what everyone else is doing. You’re not among people who know you, so all the more reason to experiment with the new. Or, if you’re not feeling it, don’t do it. Go in your favorite dress and you’ll probably be the most interesting-looking person there. 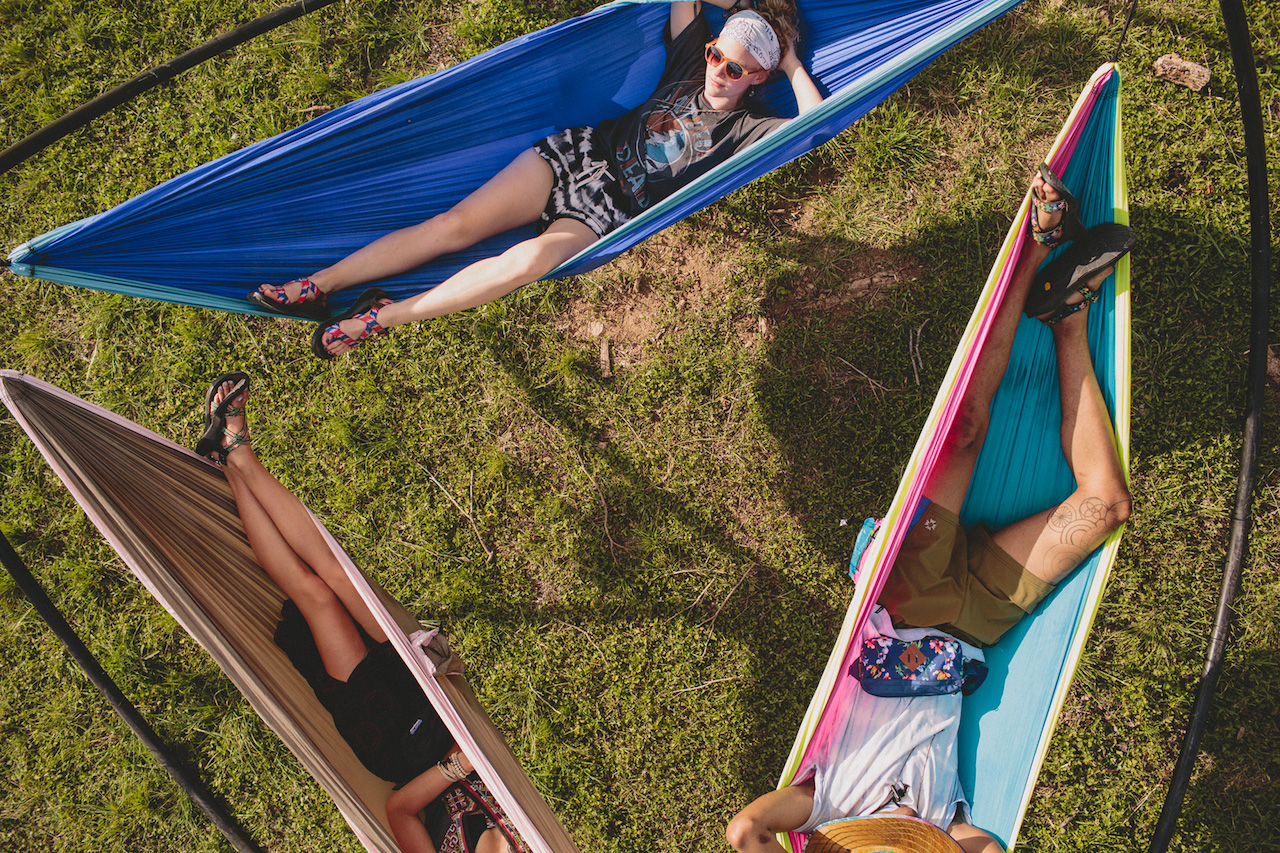 Depending on how you want to approach sleep, you may not need these at all, but they’re worth bringing. Trying to sleep at a festival is an experience in and of itself. It’s brave to call it quits when you think you’ve heard enough for the day. Maybe the EDM talent is coming out and you’re just not interested in seeing where that goes. When the flashing lights are getting to be a little much and the crowd seems to have taken a drastic turn, it’s probably time to find your tent.

But music festivals are never just “concerts,” because it really is impossible to escape the music. It doesn’t end. There is no encore. The beats echo in the night air until a completely new vibe picks them up the next morning. Sometimes the hum of your own eardrums is all you need to gain back control. 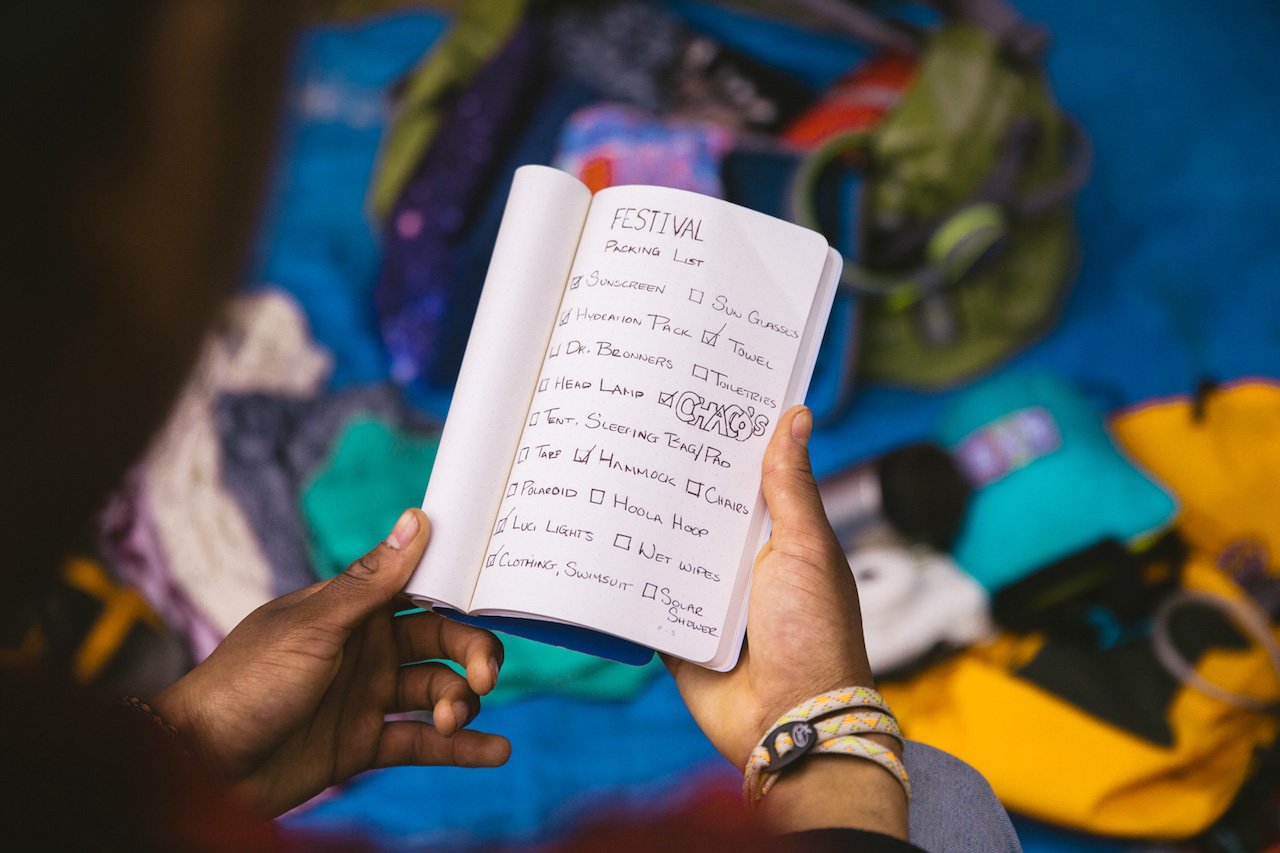 Do notebooks still exist in our world? They should. Maybe you’re hitting up this festival because you want to support a few of your favorite bands, but keep in mind that they’re not going to be the only ones there. You’re going to be standing in line for a bloody mary one morning and hear a song that really catches you — and it’s probably going to be coming from one of the lesser-frequented stages. Get your drink and go check it out. Maybe you’ll be just one of 20 people standing there with real access to the artist.

This is how you get in on the ground level. Super fans, those people who follow bands around for years, who’ve seen hundreds of shows and own all the obscure recordings — these are the moments they took advantage of. Keep coming back to the purpose of the festival: to be moved by the beats and the lyrics, to enter into a world where music is the only constant. Make it a priority to leave with something new.

Hear something you like, write it down. The music isn’t meant to end at the festival gates — it’s meant to be taken home. 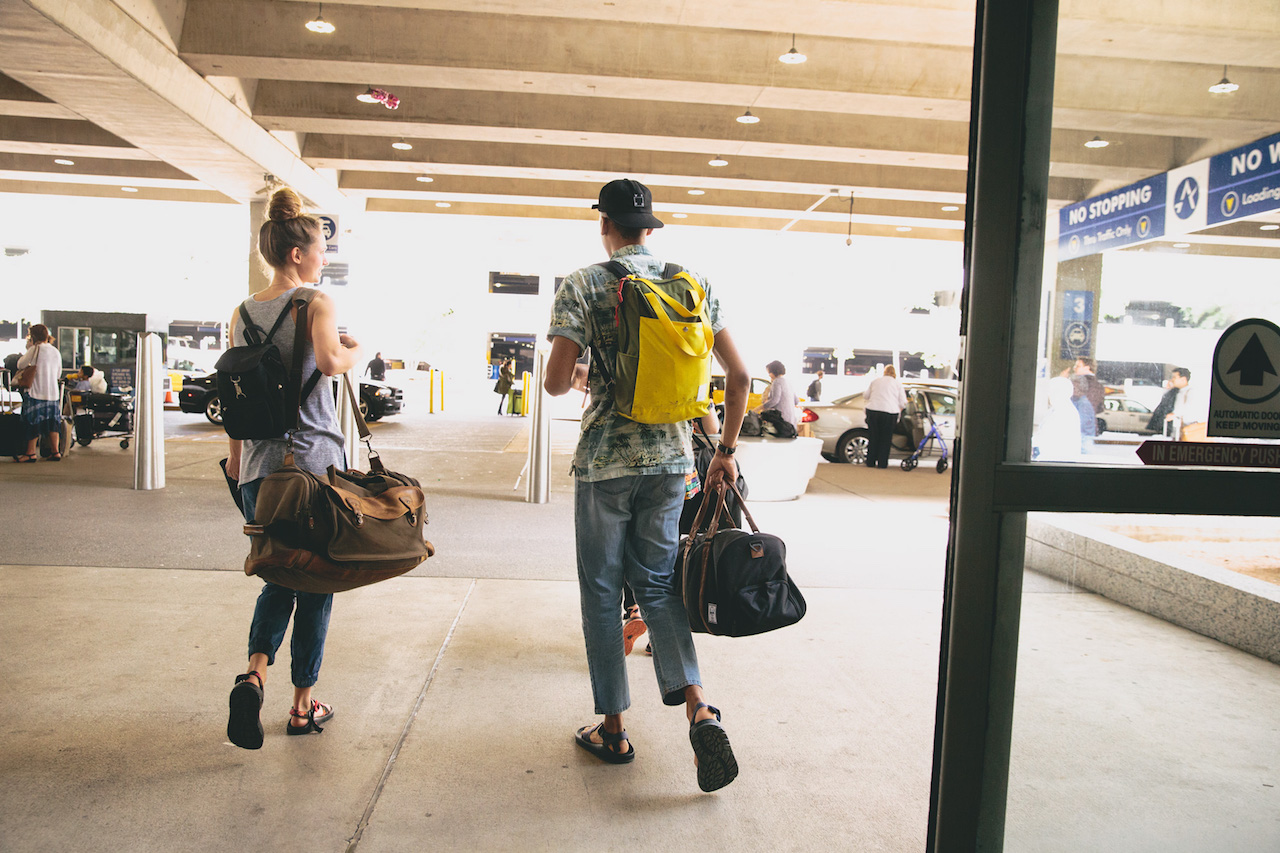 There are a lot of bags out there. Some of them are worth their salt, some of them just want to sell you a brand. You need something that’s at least somewhat waterproof, that you can sling over your shoulder comfortably, and that’s big enough for you to carry some cash for burritos, an extremely large water bottle, a phone or disposable camera, and a towel or thin blanket to throw out on the hill. 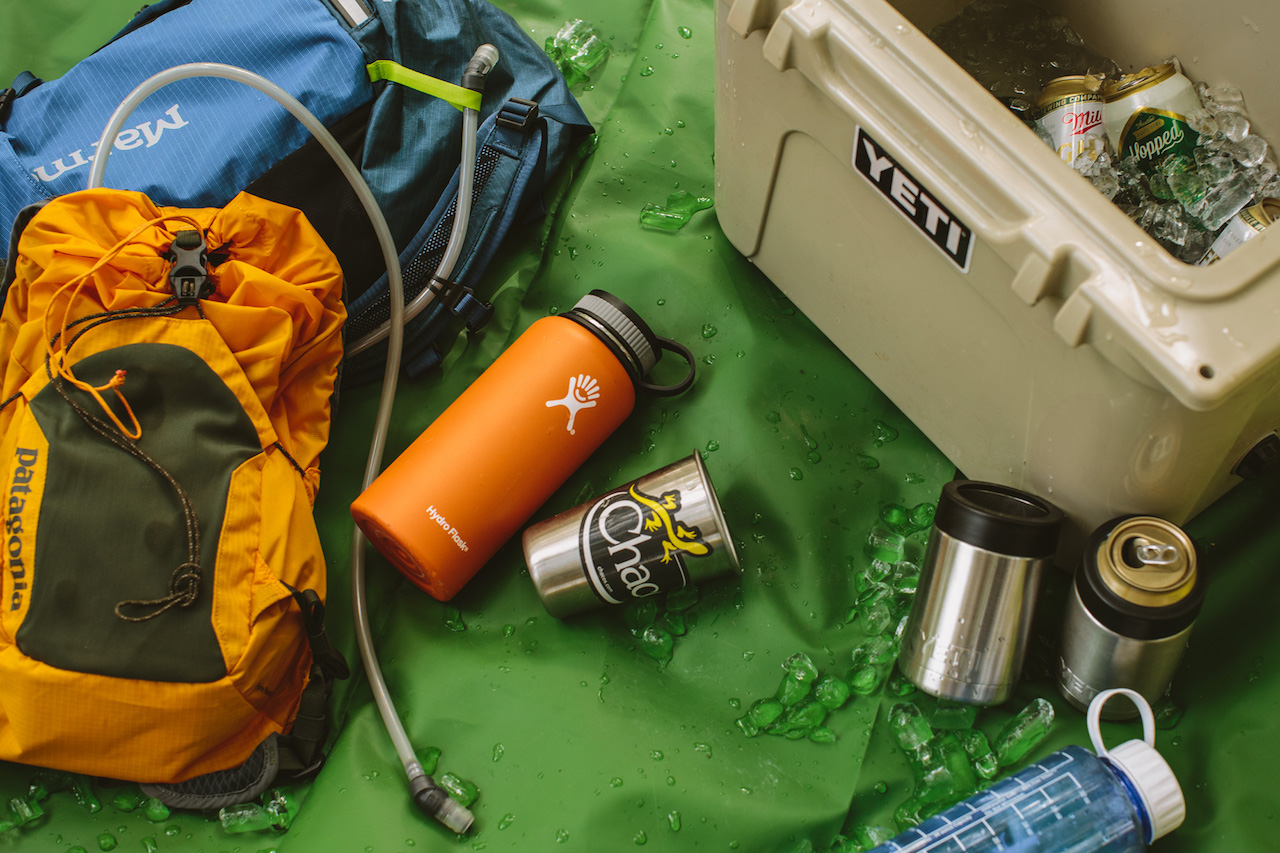 What everyone forgets to talk about when they talk about festivals is the exhaustion. At times, this experience is going to be work. Your campsite might be halfway up a ski mountain, it might be way out in a satellite campground that you need to take a shuttle to. You’re going to need to hydrate to survive, and constantly. A backpack hydration system is the obvious choice, and it’s a good one. But if you’re more into the old-fashioned bottle route, try something stainless steel. It’s 2016 and BPA is a real thing. 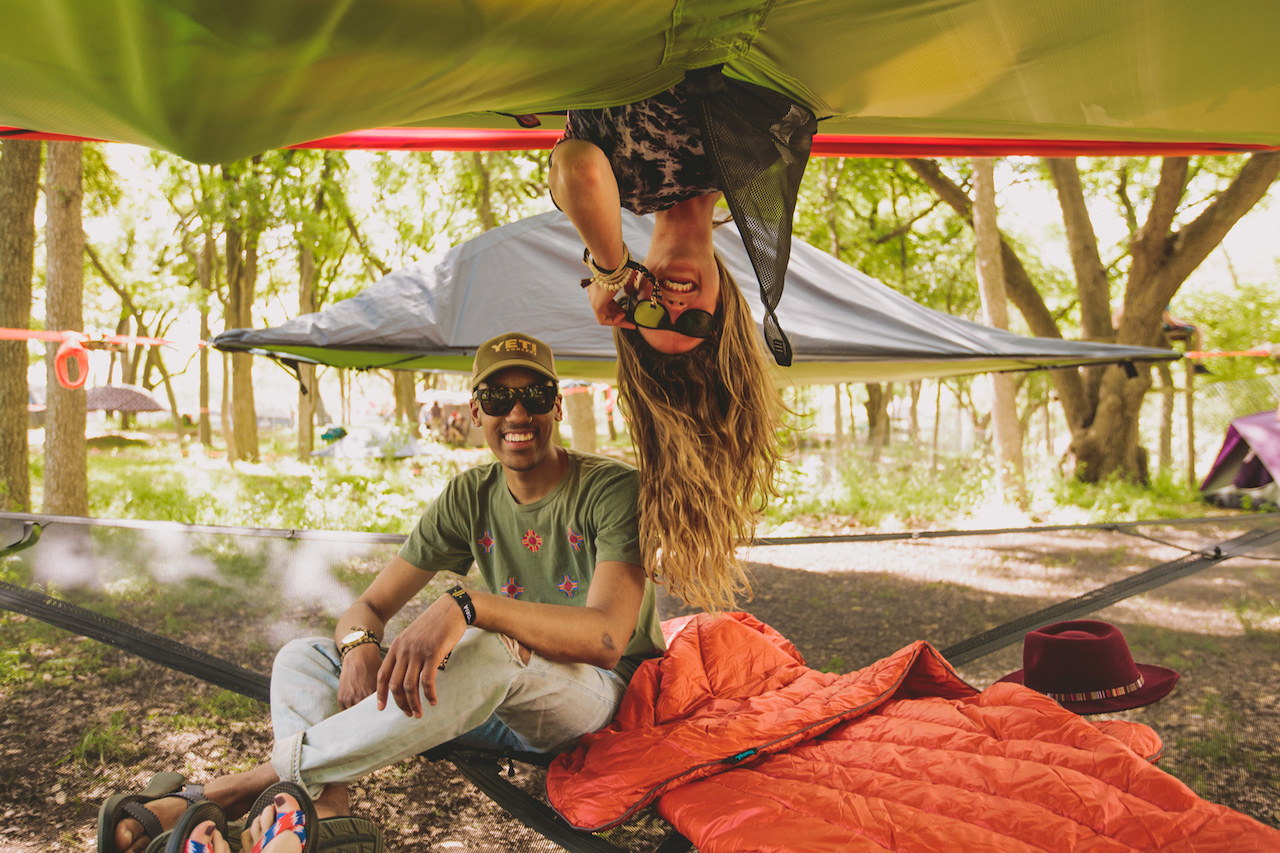 It doesn’t need to be North Face or even L.L. Bean. It’s just got to give you shelter. I bought my tent for $29.99 at a salvage store. I don’t know who made it, nobody recognizes the brand, but it’s sheltered friends, cousins, dogs, and maybe a few strangers over the past seven years.

Having the shelter is one thing — knowing how to set it up is another. If you’ve never set up a tent before, learn. Practice. Get to the point where you don’t need the directions because they really shouldn’t be necessary. When you finally get to your site, you don’t want to be confused over how to attach a fly, and you’re not going to want to come back to your tent halfway through the day and see that fly melting in your neighbor’s fire pit. 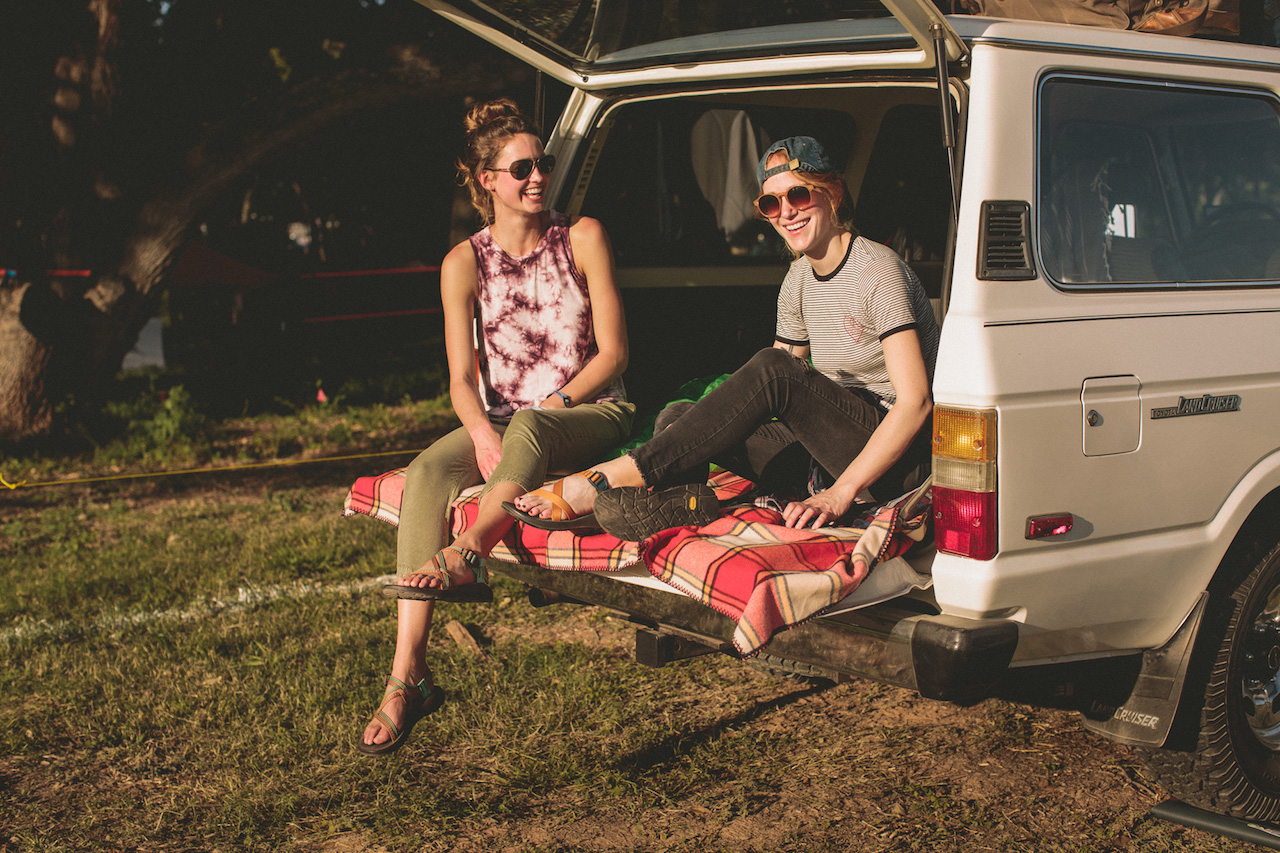 Chairs are cumbersome. Maybe you’ll have room to throw them in the car and set them up at the campsite, but you really don’t want to be hauling a chair around to the music. Simplicity, independence, fluidity — those are the things you want to aim for when walking down to the stages.

Go with a picnic blanket or a tapestry. Something that’s light and airy enough that you can roll it up, put it in your pack, and forget it’s there when it’s time to dance. 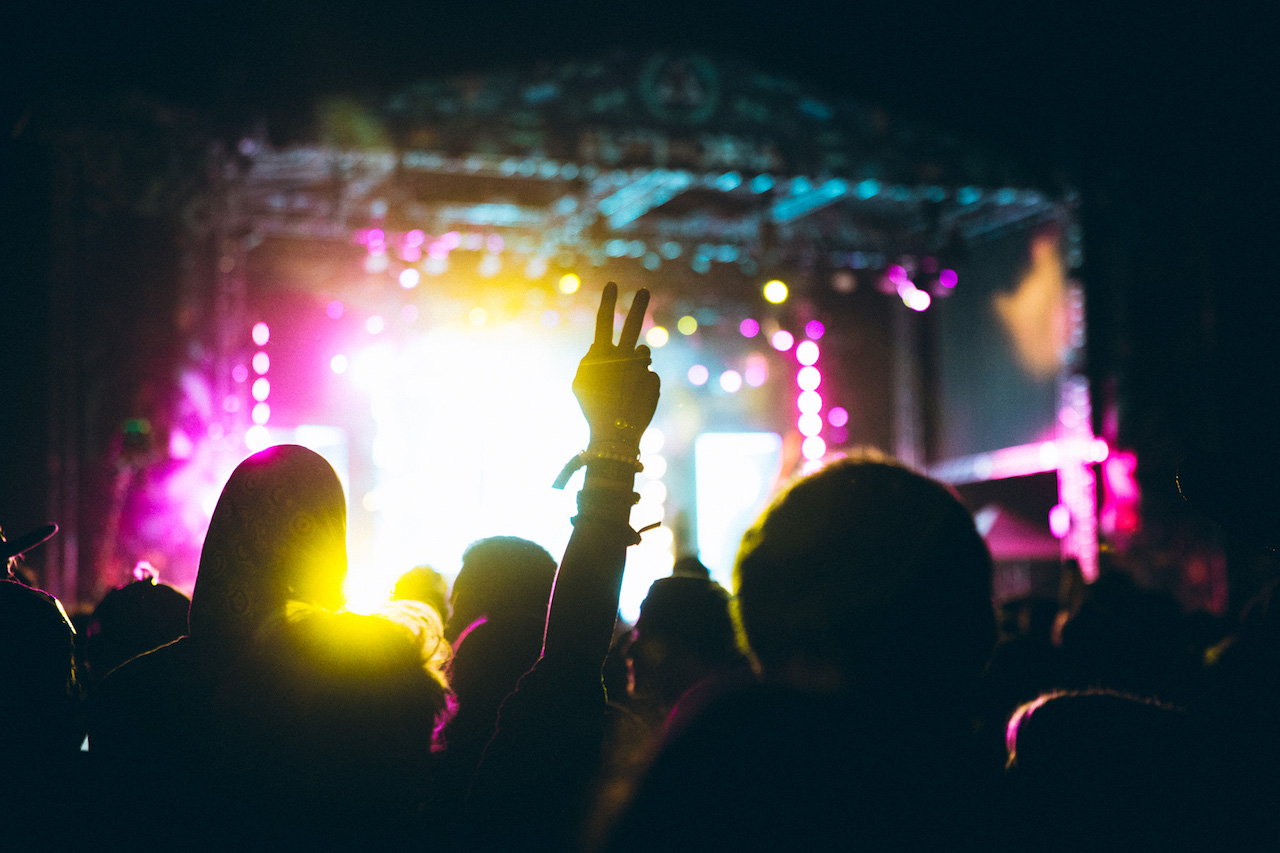 Maybe you got there right when the gates opened on the first morning. You set up your tent, took a deep breath, and walked to the stages. You probably thought you had a good lay of the land then, but let me tell you something right now: You don’t.

Over the course of the next 12 hours, people are going to fill in every possible space with their own setups. Yeah, in the daylight paths are going to develop, landmarks are going to be erected, but once the sun goes way down and the EDM beats start filling the air, you’re probably going to feel a little disoriented.

Walking through the tent sites at night is going to feel like you’re walking through a hundred different villages. You’re going to pass communities, jam sessions, art sessions, circles of people sitting in silence around a campfire… It’s going to get pretty easy to lose your way. So at least bring some light for yourself and hopefully a friend to brave the journey with. 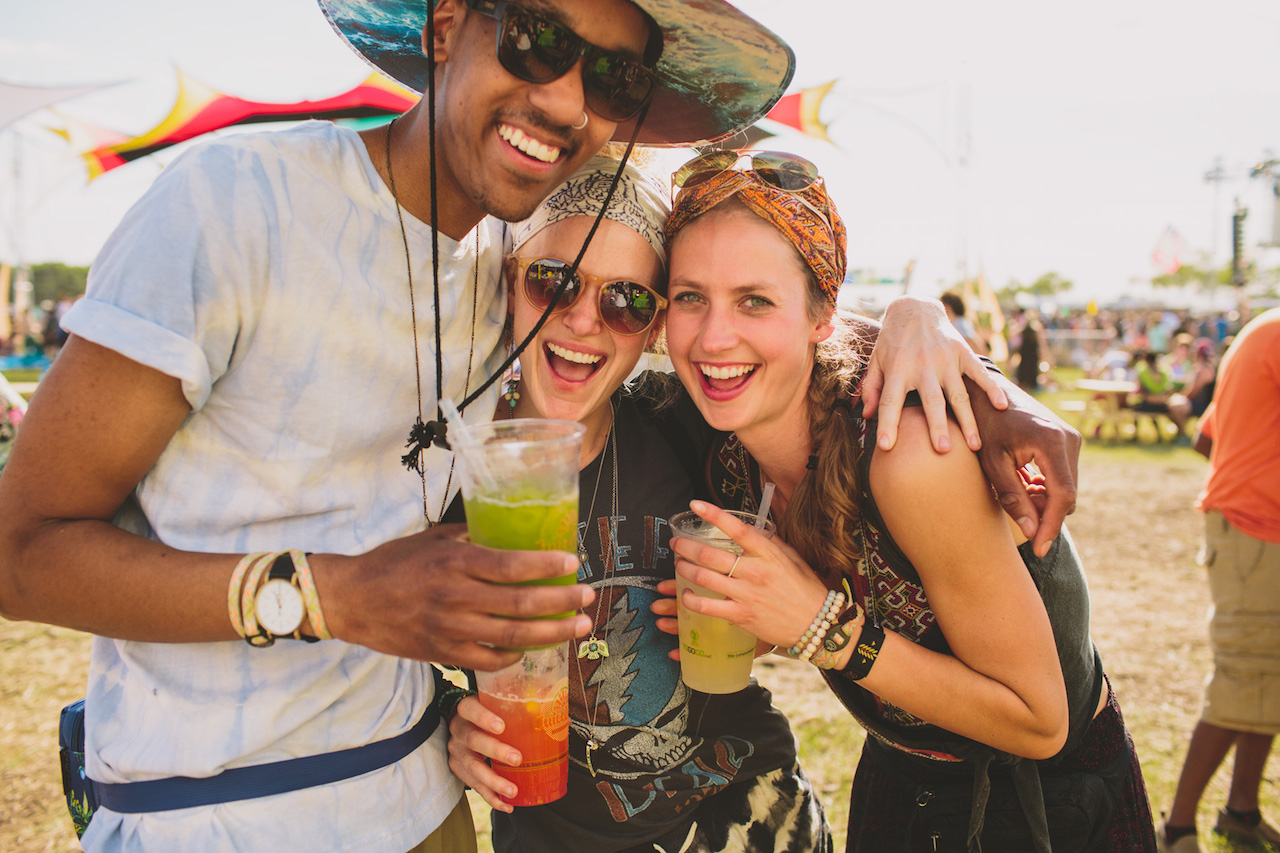 If this is your first festival, it might be a little weird. The crowds can be pretty hard to take and the night scene can honestly get a little eerie and apocalyptic. The trick is to keep coming back to the music — that’s the reason this whole thing exists.

Don’t get swept up in the partying or the heavy drinking because that all gets real old, real quick in the heat. People may have told you to go without a plan, just see all you can see. I say, go with a plan. Let yourself be swept into the acts that move you, but give yourself some structure to go off of too. You’re basically entering a massive free-for-all — it’ll feel good to have a piece of paper to return to, something that reminds you that you’re there to leave with something new. You didn’t come to forget.

This post is proudly produced in partnership with Chaco footwear.
Tagged
Travel
What did you think of this story?
Meh
Good
Awesome