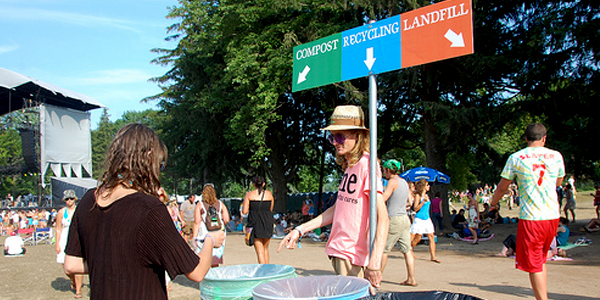 If you’re like me, you’ll be hitting as many music festivals this summer as your wallet can handle. Impossible to ignore along with the scantily clad fans will be the things we leave behind: snack food packaging, plastic bottles and waste. The pollution we generate just getting there is another environmental cost.

As youth are on the vanguard of the environmental movement, it’s no surprise that organizers are now on the lookout for high profile methods of reducing the carbon footprint of these massive gatherings.

The following five U.S. music festivals are greening their eco-footprint in creative and inspiring ways.

Rothbury Festival in Michigan is not only on top of the pack with regard to greening initiatives, it has gained a reputation for being an innovator in sustainability projects. Its motto is to ‘throw a HUGE party with a purpose’. In addition to selling Green Tags to help offset festival-goers carbon output, Rothbury has invested in the Tatanka Wind Farm, the largest wind farm in the Dakotas, to offset its own staff and band members’ carbon air-print. 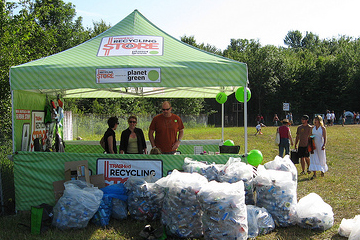 Rothbury hosts the Sustainable Schools Program, partnering with local companies to install two wind-turbines at local Michigan schools. They also run the Green Rocks! Contest, challenging local school children in grades 1-8 with the question, “How can you make your school or community more sustainable?” Classrooms submit ideas to compete for a pizza party and live concert for their class.

Most innovative, perhaps, is the ‘V-Bike’ by Viability, an 8 person bicycle that generates renewable, carbon free power for an onsite digital recording studio. Other notable eco-initiatives include organic festival t-shirts, an annual food drive, and a cell phone recycling drive so concert-goers can turn in old, unused mobile phones and receive discount vouchers and a chance to win prizes in return.

Like the High Sierra Music Festival (featured below), Rothbury partners with Clifbar’s GreenNotes program to help reduce fan transportation impact by both promoting rideshares among fans and assisting touring bands with ways to reduce their eco-footprint. 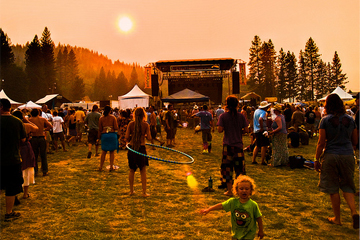 Visitors are given two bags when they arrive – one for waste and one for recyclables. Priority camping spots are given to sustainable campers and this year’s incentive gives the campsite that is the most creative, clean, and sustainable a prize of new camping gear. Daily finalists receive drink vouchers, late-night performances wristbands, Leave No Trace memberships, and HSMF gear.

The festival also partners with local farmers to divert food scraps from the landfill with its composting program and teams up with sustainable companies like Bay-area based Clifbar and Colorado-based, wind-powered New Belgium Brewing Company in the Start Global Cooling campaign. Like Bonnaroo and Lollapalooza, it offers the option to purchase a $2.50 Be Green Energy Tag to offset the carbon imprint of driving to the festival. 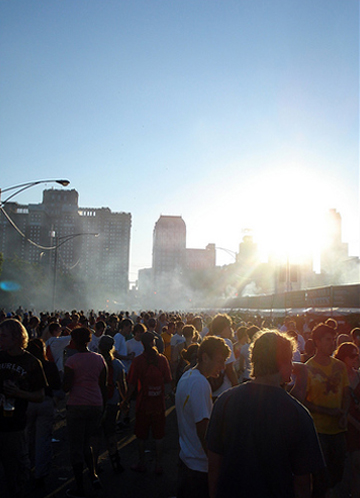 A Lollapalooza Crowd
Being Nudged Toward Eco-Consciousness,
Photo (and feature photo): JOE M500

They only accept vendors selling sustainable, eco-friendly, and/or fair trade products. The Rock and Recycle program works like this: every official Lollapalooza program guide has a detachable Green Card, which users get stamped at various sites and activities throughout Grant Park.

Concert-goers pick up a free recycling bag at one of the four Rock and Recycle stations, return their recyclables, and get stamps as well the chance to win a free t-shirt. Green Card holders can also earn stamps for taking public transit, riding their bike, and refilling their reusable water bottle at one of the refill stations. Participants with three stamps or more have a chance to win a 2010 Honda Insight hybrid.

Like many other festivals, ticket-buyers have the option of purchasing a $5 carbon offset, called BeGreen Fan Tag. The goal this year is to sell 10,000 carbon offset tags.

Bumbershoot in Seattle is also a leader in greener festivals. To begin with, organizers have creatively applied the re-use principle by turning their old signage into new Bumbershoot bags. A small local business called Alchemy Goods turns old rubber and vinyl into bags. 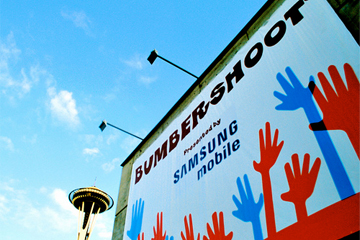 All this is after the festival signs have already been used multiple times. First they print most of their new signage locally on 100% recyclable material using 100% VOC and solvent-free inks. Then they re-use a large percentage of the previous year’s signs for the current year’s promotion.

To power up the festival, Bumbershoot uses energy from Seattle City Light, a long-time carbon neutral energy provider. Its refrigerator trucks are biodiesel powered and its Northwest Rooms that showcase festival art is solar-powered. In addition, Bumbershoot sells pesticide- and sweatshop-free cotton T-shirts and has a vendor ban on Styrofoam use. 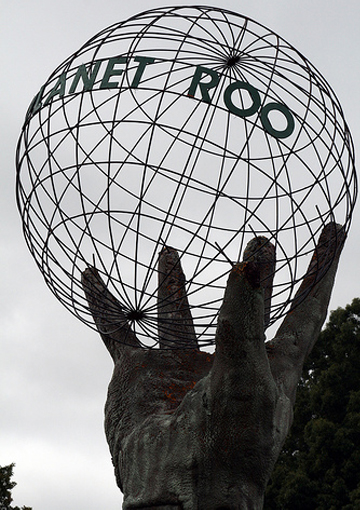 Among the many ways Bonnaroo is living up to that award are sourcing food vendors and suppliers locally, having over 2000 recycling bins, stages powered with biodiesel blends, and hosting a food drive that benefits the Good Samaritan Food Pantry in Manchester, TN.

Planet Roo, an area devoted to organic foods and educating about sustainability, features a PV panel-powered stage and a Strawbale building with surrounding demonstration gardens. Bonnaroo has partnered with Stanley gear to sell reusable stainless steel water bottles as part of the Less-Bottled Water Program. For every reusable bottle purchased, $1 will go to the Global Water Challenge, whose goal is to meet the global need for clean water.

If you’ve been to a festival lately, you probably have seen the color-coded bins: green for compost, blue for recycling, and orange for landfill. This is the work of Clean Vibes, the premier waste manager for festivals, including Bonnaroo. They also partner with many other festivals including Lollapalooza and High Sierra, to manage waste streams, diverting tens of thousands of pounds of recyclables and compostable materials from the landfill.

While there is no doubt that there is still a long way to go on the path towards sustainability, these green initiatives are a welcome eco-step forward.

It is clear that music festivals are not only about fun, music, art, and community, but are also evolving into ways to empower people and educate about sustainability. So while your roaming summer music enjoyment can still be a shock to the wallet, it doesn’t have to be as big of a shock to the earth.

The most beautiful and emptiest state parks in New England
The best national parks for every type of traveler
For the perfect day of hiking and Colombian coffee, head to Jardín
Watch the Perseid meteor shower light up the sky this August
The Jordan Trail: Hiker’s guide to crossing the country in 40 days and 40 nights Promoted