Humans could be defined by our ability to make inhumane conditions completely human. Violence, poverty, or the unjust flavor of the month weigh down on the collective, and our ability to carry on squeezes back up through the cracks.

In my first of two trips to Juarez, that was what I saw in my photos: people getting on with it. The shadow of violence was everywhere. Tension radiated off roadblocks like heat from Phoenix blacktop in August. The army and local and national police, all armed with machine guns, tore through the city in the back of pickup trucks. Missing persons posters wallpapered the streets. And people got on with it.

Juarez’s problems today can be traced to the 2006 presidential elections. Despite polling irregularities, Felipe Calderon was declared the victor by one-half of a percent. In what many took to be a move to show strength in the face of domestic opposition, Calderon declared war on Mexico’s drug cartels, mobilizing thousands of troops from Mexico’s army. The move was a reversal from what had been mostly inaction on the part of the government.

No other city shows the effects of Calderon’s war like Juarez. National and local police had always been expected to supplement their low incomes through bribes and shakedowns. Now, with the presence of the army, there’s another armed group in on the cut. The popular belief is each of the armed branches of the government is in some part owned by one of the cartels.

The city’s proximity to the US border makes it an immensely valuable asset to control. The Sinaloa and Juarez cartels are considered the major players in the city, while numerous rival street gangs contribute to the already obscene amounts of violence and danger.

Those who know it best have called the city a graveyard. The murder rate is staggering. You almost have to wonder how there are any people left to kill. In 2010 there were 3,100 murders. That’s an average of 8.5 per day. 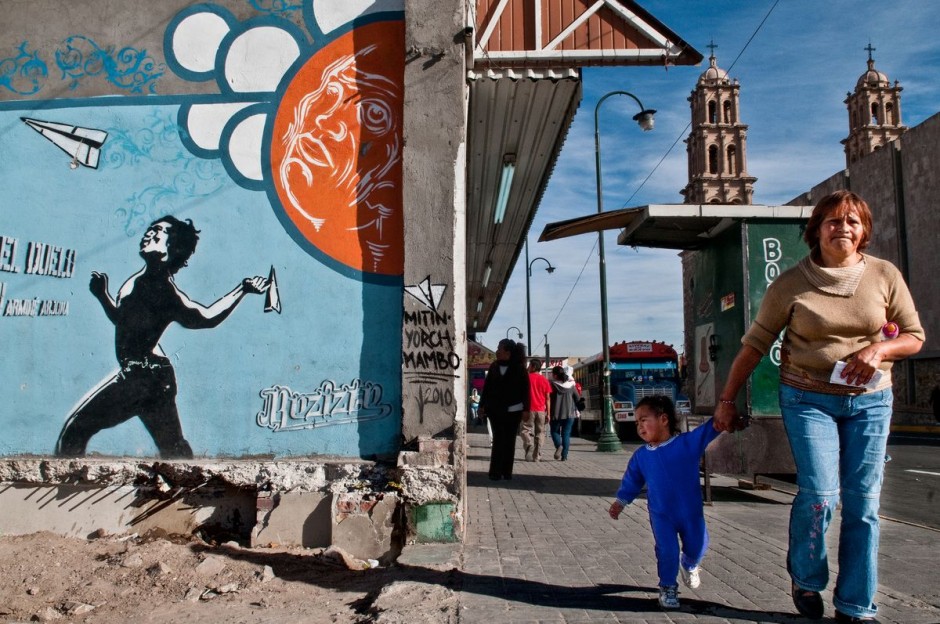 A woman walks past a mural while holding a child's hand in Ciudad Juarez, Mexico. The city became the murder capital of the world after then Mexican president Felipe Calderon declared war on the drug cartels, sending thousands of troops into cities to forcibly clear out the smugglers and dealers. At the height of the violence in 2010, Juarez averaged just under ten murders per day.
All photos: Author 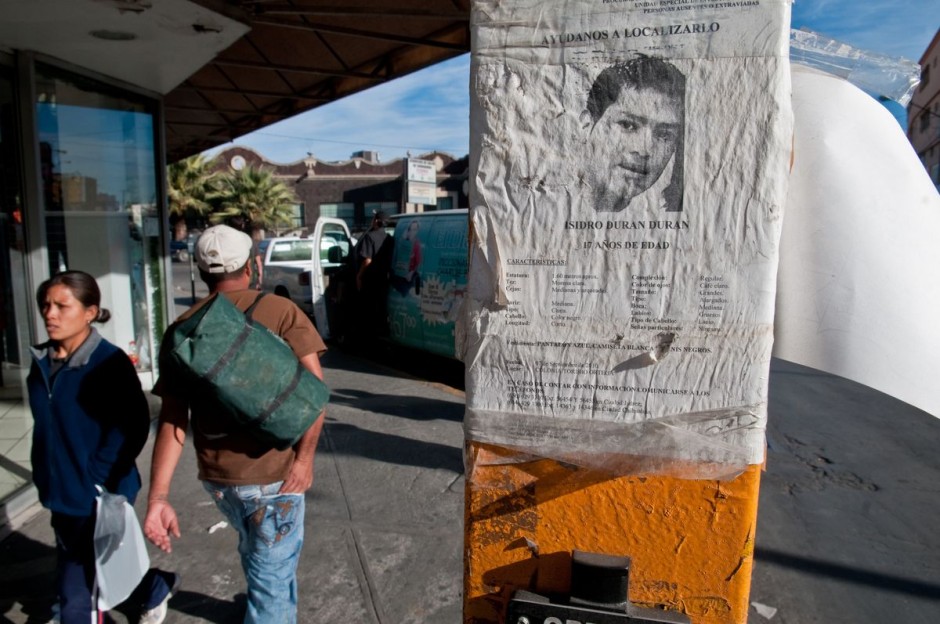 Authors and journalists have said that Juarez is a cemetery. The statement does not just reference the all-too-common graves found in abandoned buildings, but also the missing persons posters that appear like headstones on seemingly every free inch of public wall space. 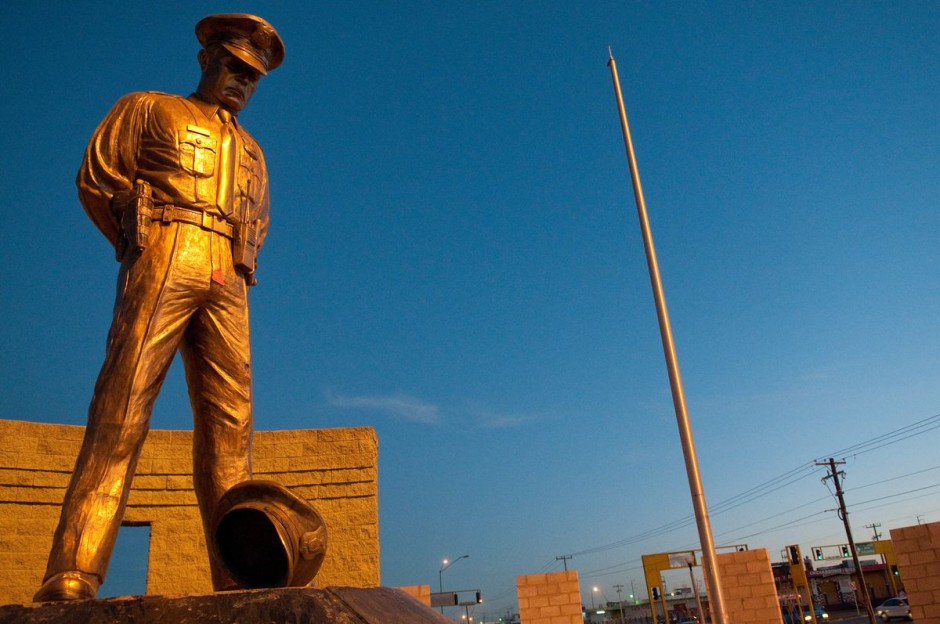 Juarez's Police Memorial strikes a somber and defeated tone. One cartel placed a note at the memorial taking credit for the murders of four officers as well as a list of 17 other police they planned to kill. 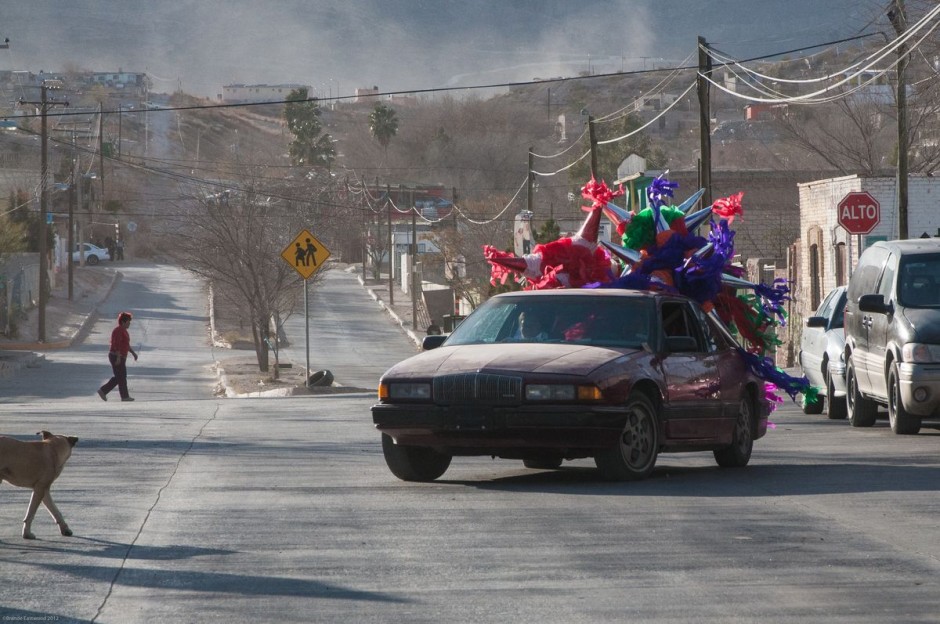 A car carrying party balloons turns on a street in the violent border city of Ciudad Juarez, Mexico. 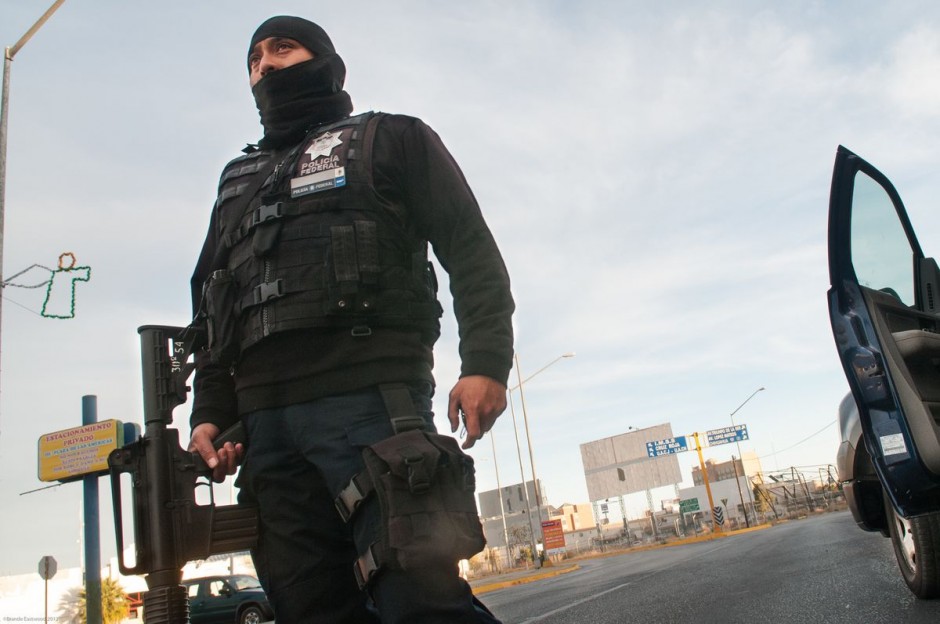 Federal police and the army were sent to Juarez to augment local law enforcement. Instead of the intended crackdown, the cartels found two additional armed groups that were all too easy to influence with bribes or threats. Rivalries developed between the law enforcement groups that more than once resulted in shootouts. 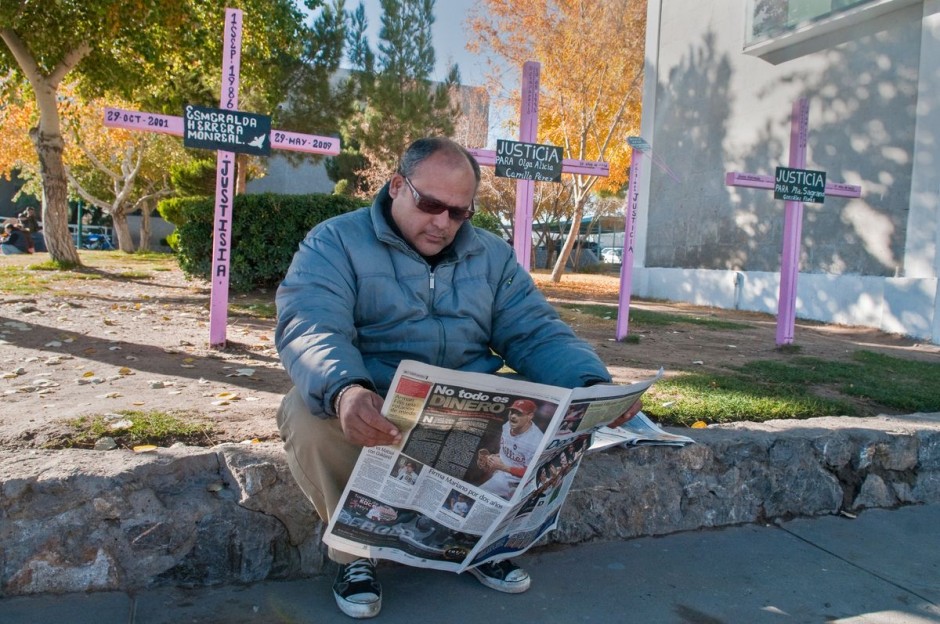 Since 1993 thousands of women have gone missing or been found dead in and around Juarez. The lack of response from police prompted the creation of the group Ni Una Mas (Not One More). The group places pink crosses in public areas as a reminder of the gender-based violence occurring simultaneously with the cartel-related killings. 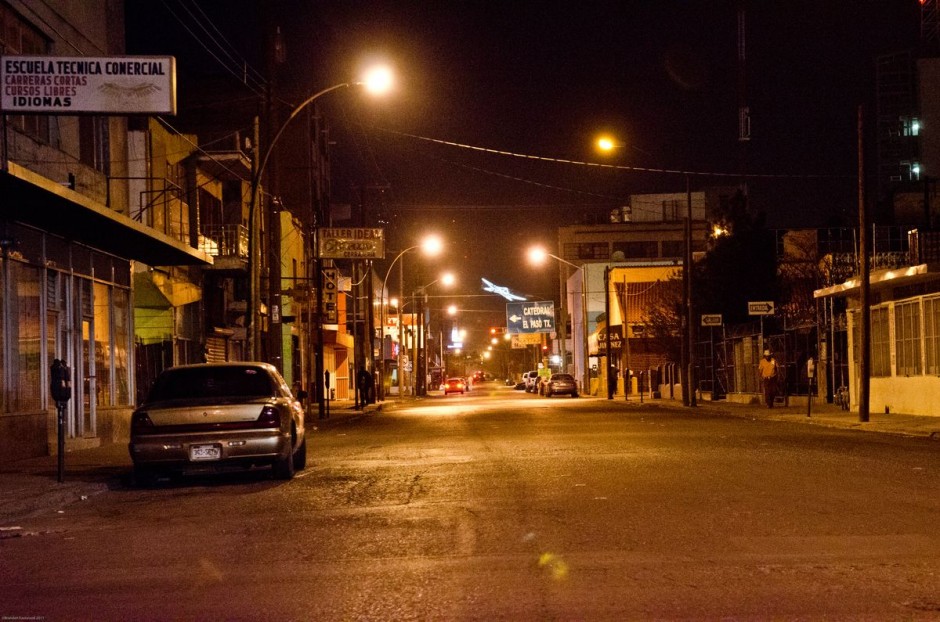 In February 2014, Joaquin El Chapo Guzman, leader of the notorious Sinaloa Cartel, was arrested. Along with improving crime rates, a new president, and changing attitudes toward some drugs in the US, there is some hope returning to Murder City. In 2013, the city averaged just over two murders per day. While there are some positive signs, what comes next for Juarez is still anybody's guess.

See the moon unlike ever before thanks to this illuminated exhibit 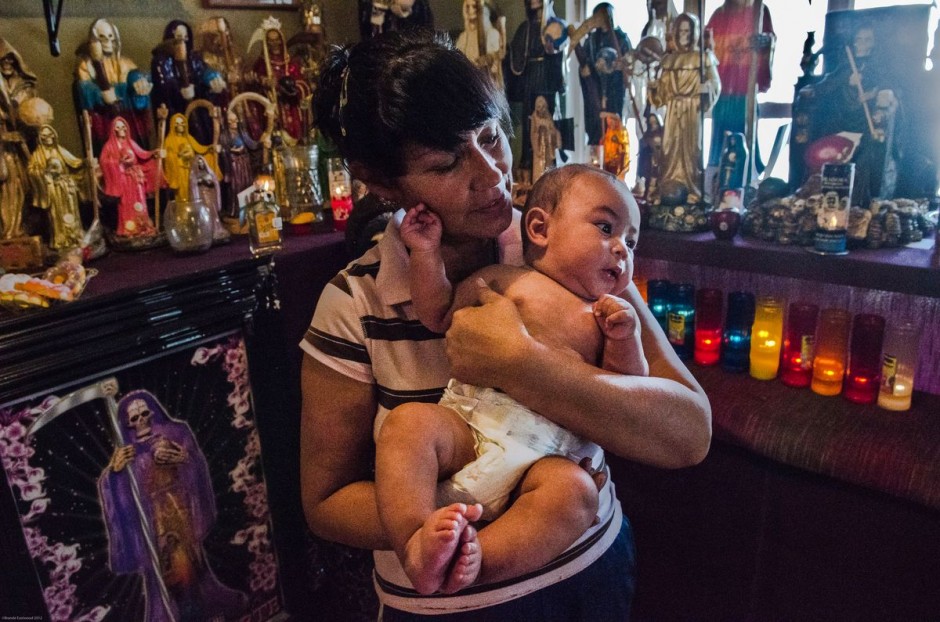 A woman holds her baby at the church of Santa Muerte. Santa Muerte, who appears almost identical to the Grim Reaper, has become something of a patron saint for those involved in the drug trade and the people who live near its violence. 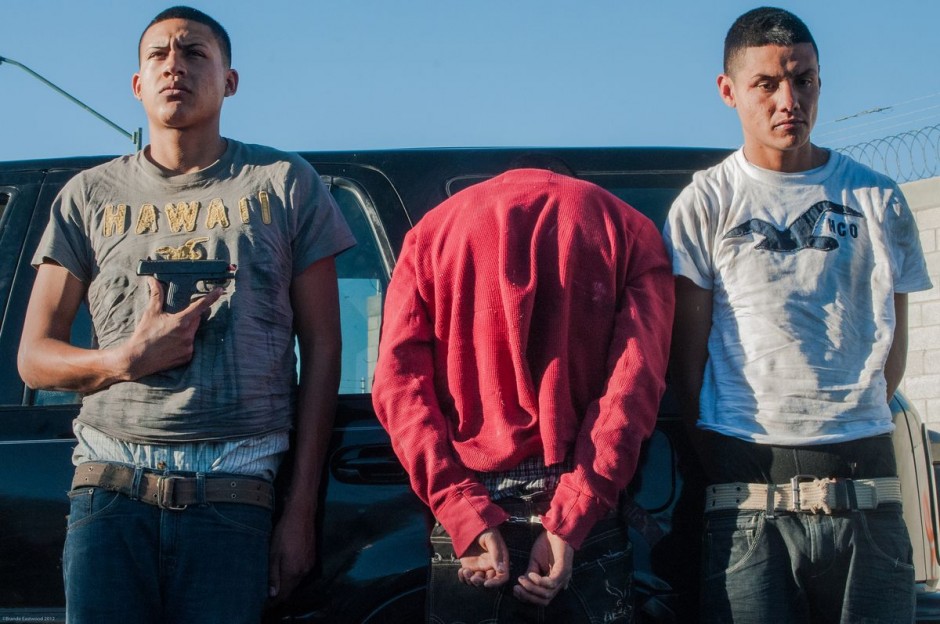 These three men were arrested in connection to a carjacking and displayed to the media by police like a set of trophies. Stolen cars are often later used in drive-by shootings and other violent crime. 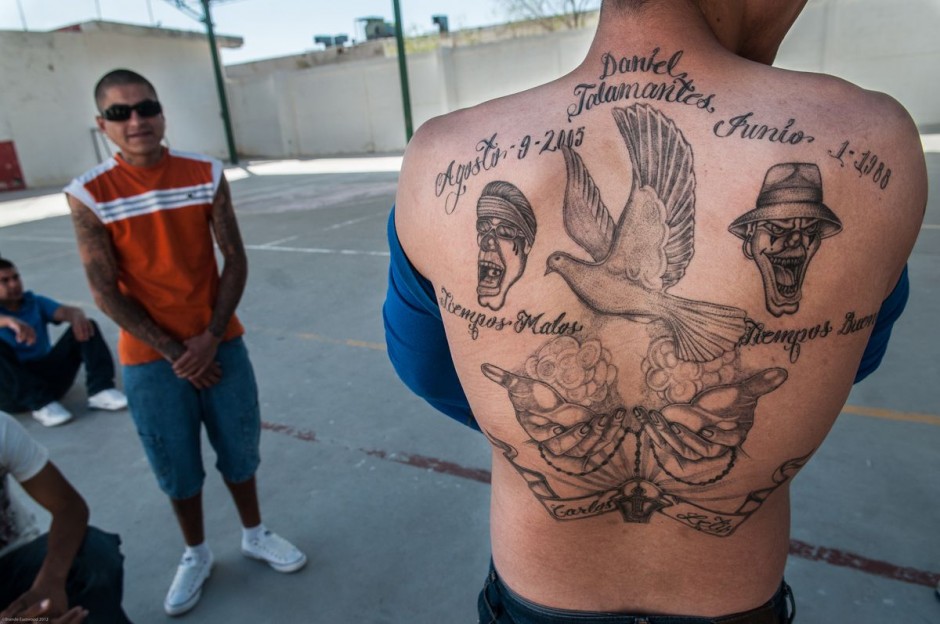 At the municipal prison inmates are segregated by gang affiliation in order to keep the peace.

Disembodied violence in the world’s most dangerous city