As a child I loved staying up late with a tiny telescope watching the sky, and that same passion now influences my photography and travel. I tend to visit remote places where there’s low light pollution, such as the Dry Tortugas and regions of the Rockies, where many of the photos below were taken.

Exploring in the dark makes most of us naturally uncomfortable, but when the sun sets it is truly a whole new world out there. Mundane elements such as a tree or a hill can transform into remarkable subjects. Of course, there’s always the process of getting to remote locations, setting up the camera, and trying to shoot in the darkness, which makes for misadventures — a few of which I’ve recounted below. 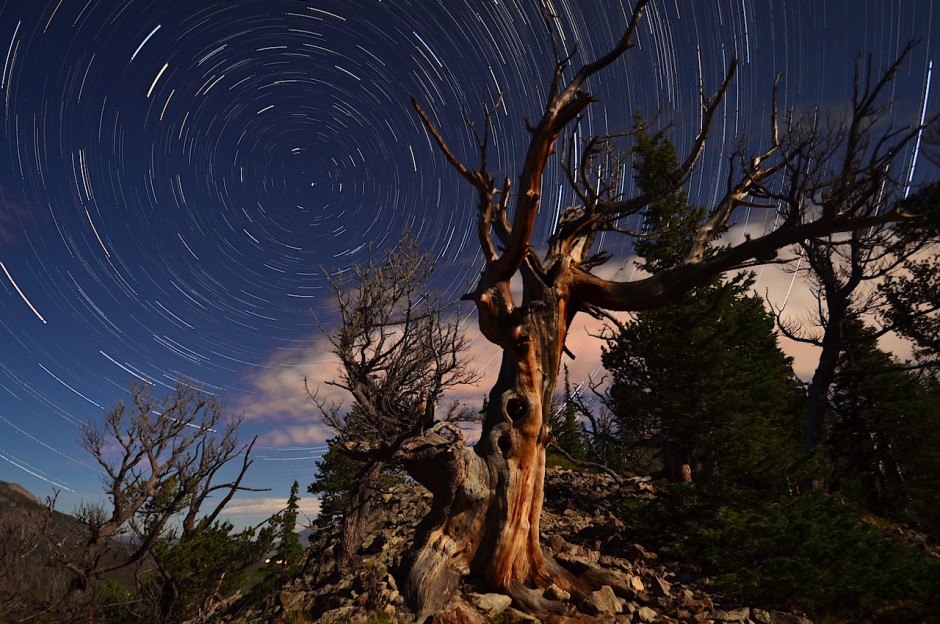 It was nearly 10pm when I spotted something big moving in the distance on Mount Royal near Frisco, Colorado. First thing that came to mind was bear. I started yelling like a madman. “Heyyyyy Mr bear” echoed throughout the whole mountain. The bear disappeared, I packed my gear and started descending, later coming across a group of locals enjoying a bonfire. One of them gave me a weird look and said, “Seen any bears around here tonight?” 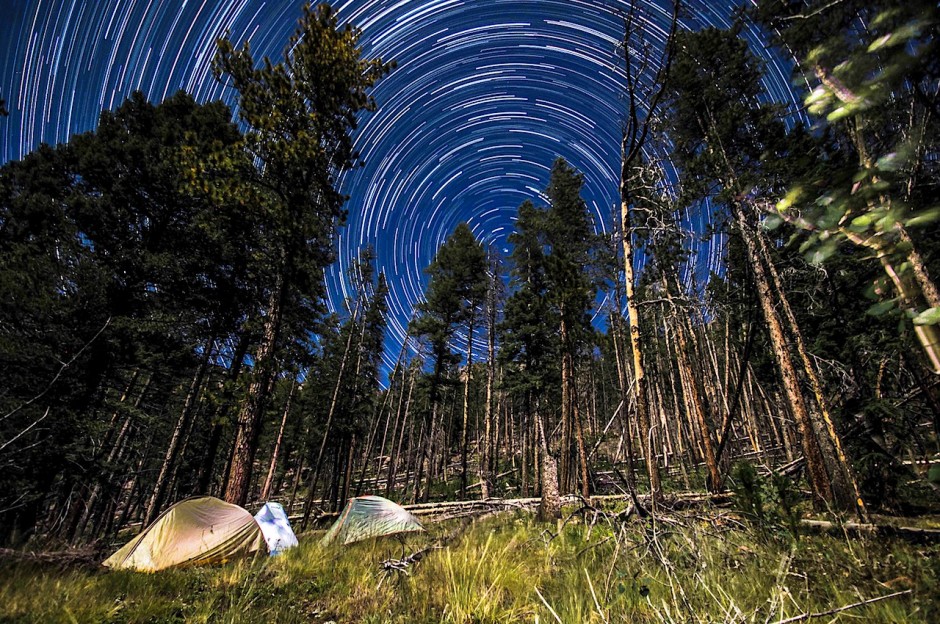 It wasn’t the greatest idea to start a hiking trip in Colorado’s Pike National Forest at almost 6pm. Luckily for me and two friends we had a full moon, which rendered our headlamps unnecessary. That same moon evenly illuminated our campsite while I made this shot. 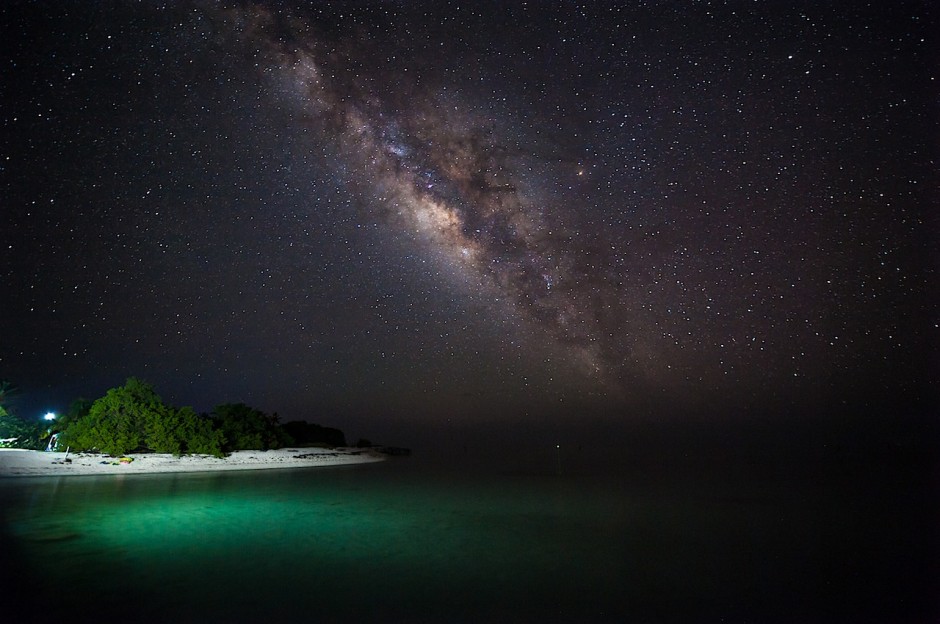 The Dry Tortugas National Park has some of the darkest skies in South Florida. Light pollution is nonexistent out there. Despite having a large comfortable tent, I spent every single night for five straights days sleeping outside, covered only by a blanket of stars. 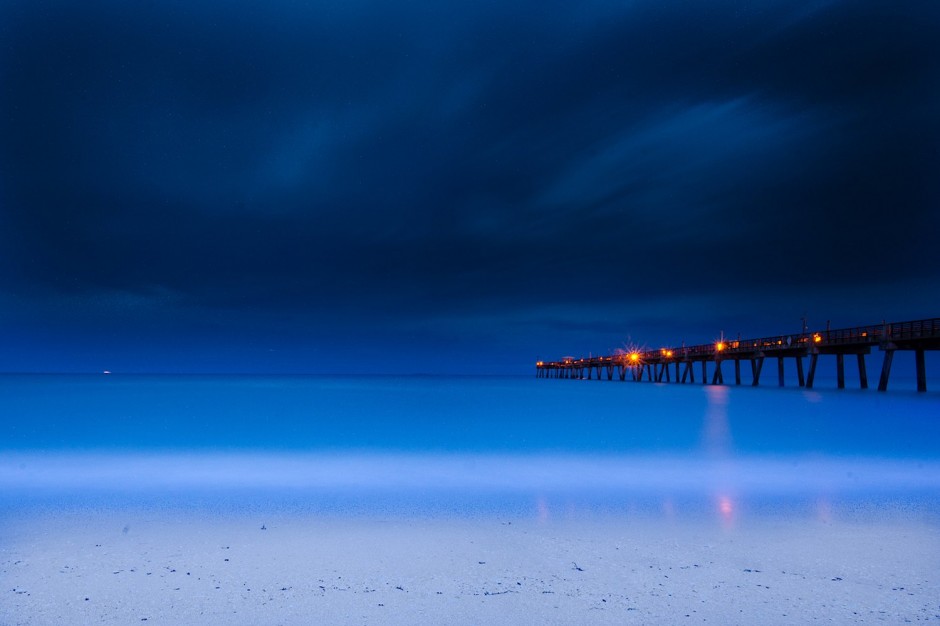 While chasing a small thunderstorm in South Florida my first stop was Dania Beach, a favorite of all locals. I wanted to compose a shot with the pier and lighting strikes in the background. However, the band of storms we were hoping to shoot had already passed through that area, leaving me empty handed, but still with this shot. 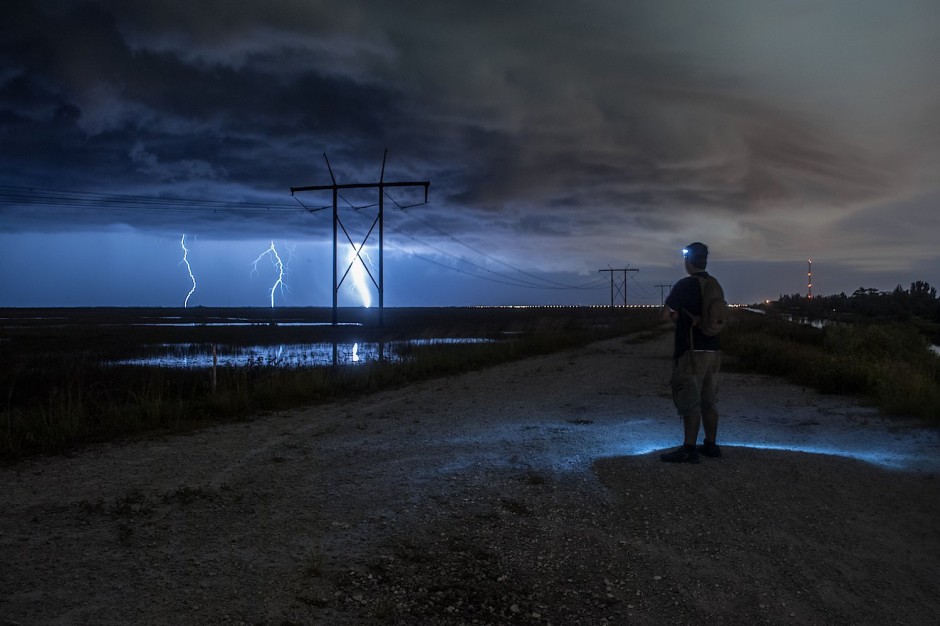 After four separate trips to Markham Park in Weston, FL, my patience paid off. After releasing the shutter I knew I had the shot. The bolt’s position and timing had been flawless. But in a matter of seconds the timid breeze turned into an intimidating gale. I had not secured my tripod with any weights (I thought it would not be necessary since the wind wasn’t blowing when I started shooting). Now the tripod began to rock, and I watched in dismay as my camera jettisoned down the levee. The body and lens were irreparably damaged yet I returned triumphant with one of my favorite self portraits I have ever taken. Still, worth noting: Florida is the lightning capital of the US. It leads the charts with the most deaths and injuries caused by strikes. 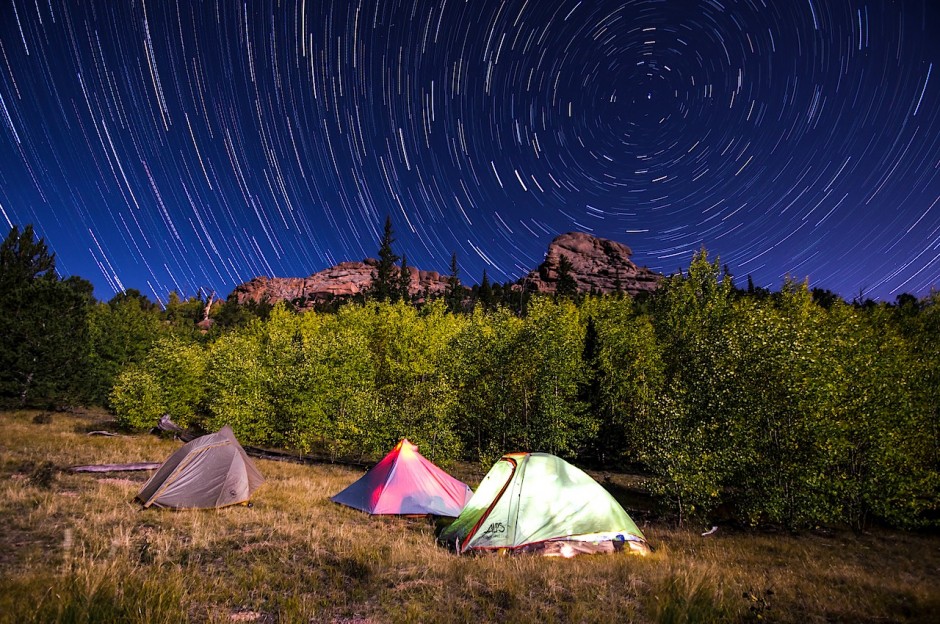 While in the Lost Creek Wilderness, I persuaded everyone to move camp so I could get this photograph. We all slept on an incline, our sleeping bags slipping off the pads. The next day we got hit hard by high winds, rain, and snow atop McCurdy Mountain. I’d left my rain jacket at home so I could bring extra photography gear. By the time I got back to camp I was soaking wet and already showing early signs of hypothermia. 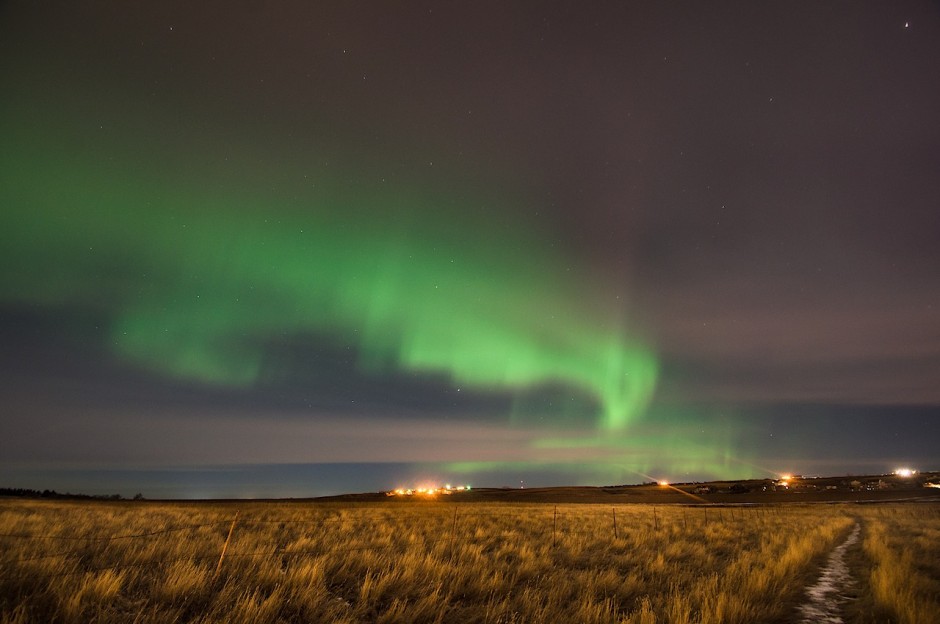 After moving to Williston, North Dakota, I spent my first four months religiously checking the Northern Lights forecast. When the lights made a completely unannounced appearance during a cold winter night, I rushed to the outskirts of town forgetting a little detail: my winter gloves. The excitement had made me forget all about the cold. It took about 45 minutes for the storm to peak and get a well-defined wavy look. By the time I had the shot I could no longer feel my fingers and couldn’t even get the camera off the tripod. 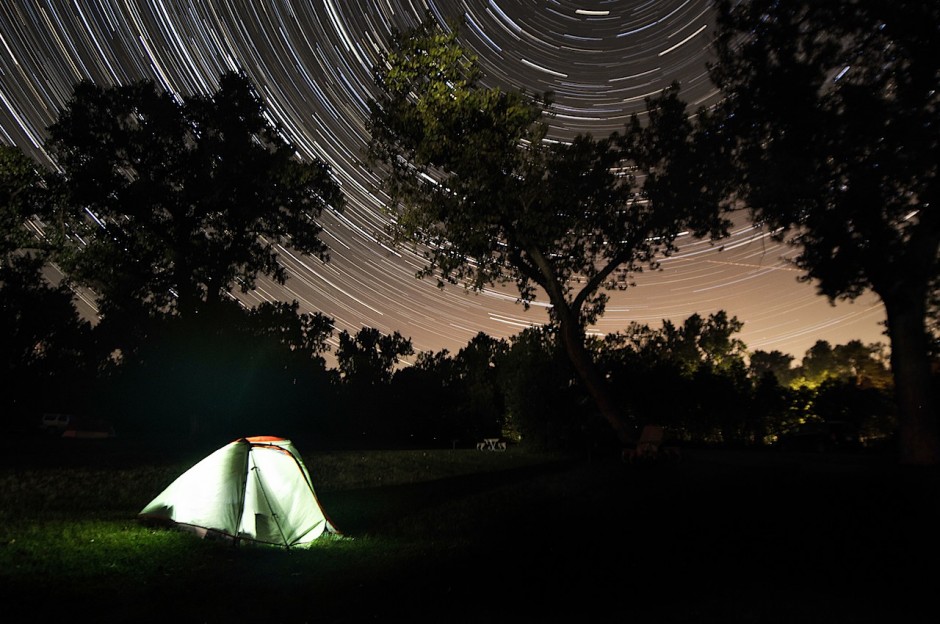 After spending four days photographing Theodore Roosevelt National Park I found myself waiting for two friends to pick me up. With no cell signal all I could do was wait, a bit uncertain if they would even make it at the arranged time. Waiting for a few hours gave me the time to set up my camera, get the shot, and get some sleep. I was awakened by my friend’s voice echoing across the campground, it was time to head home. 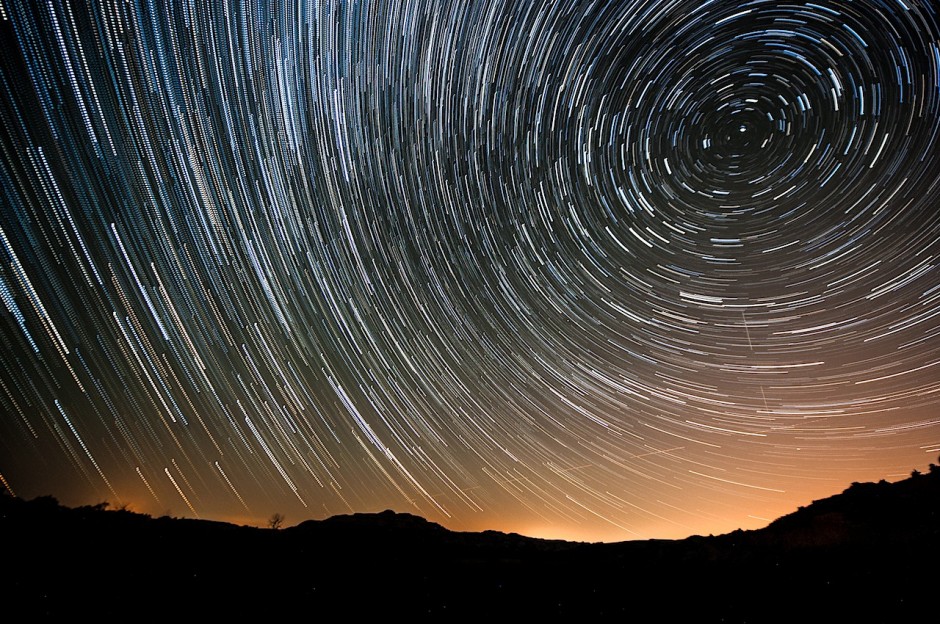 While hitchhiking around Theodore Roosevelt NP in North Dakota, I noticed something that I had never seen before: oil rigs right outside the park boundaries. This might not seem like a big deal, but the natural gas produced during the oil extraction is burnt in location, a process called “flaring.” Flaring pollutes the night sky and completely changes the whole landscape. I felt sickened and decided that it was important to make the shot, as one day we might no longer be able to see stars from here. 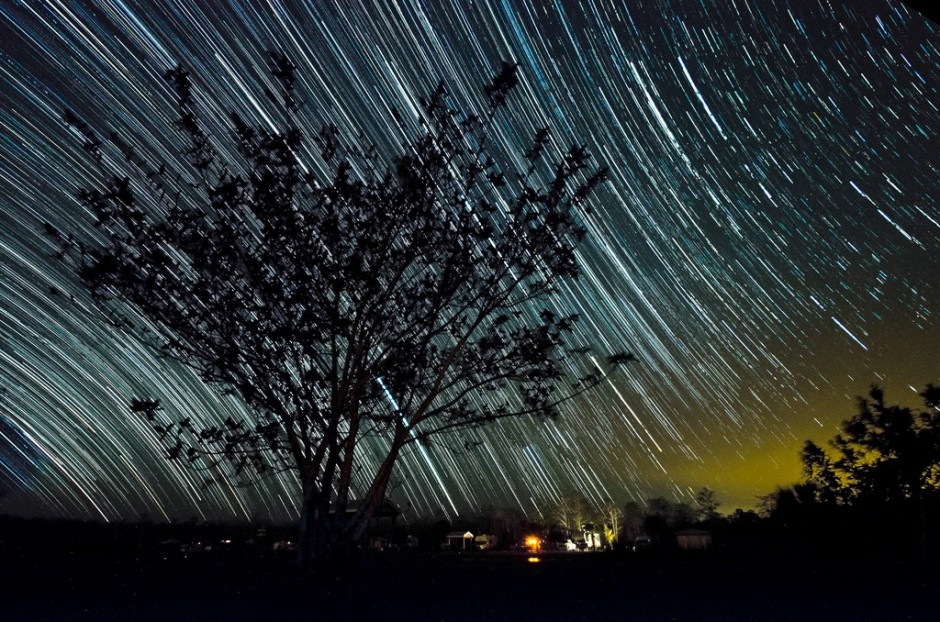 After miserably failing to fit a friend and myself into a single-person tent during a visit to South Florida’s Big Cypress National Preserve, I headed to the nearest picnic table in our campground. It was conveniently right next to a lonesome tree, a perfect subject for a star trail. I quickly set up the shot and went to rest on my wooden bed. 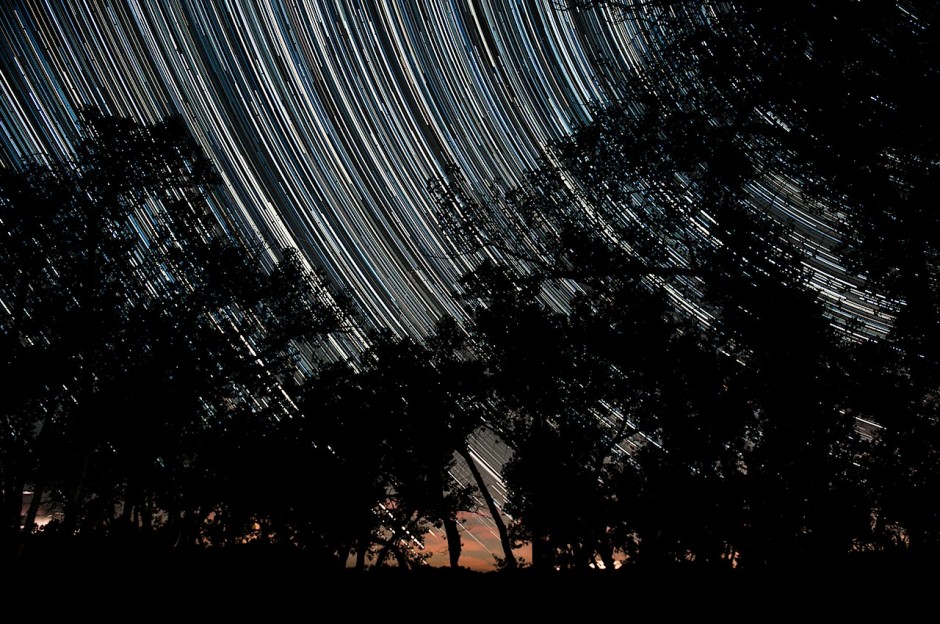 After setting up camp in Theodore Roosevelt National Park, I scouted a trail that appeared to offer the perfect composition and setting. During the nighttime, however, it was a different story. Walking alone in a dark forest is a tad scary if you ask me. You never know when the Blair Witch will snatch you. I left my camera shooting for about an hour; when I went back to pick it up there was a pair of eyes watching from a distance. I am not sure what it could had been but I believe it was either a friendly deer or a curious coyote. 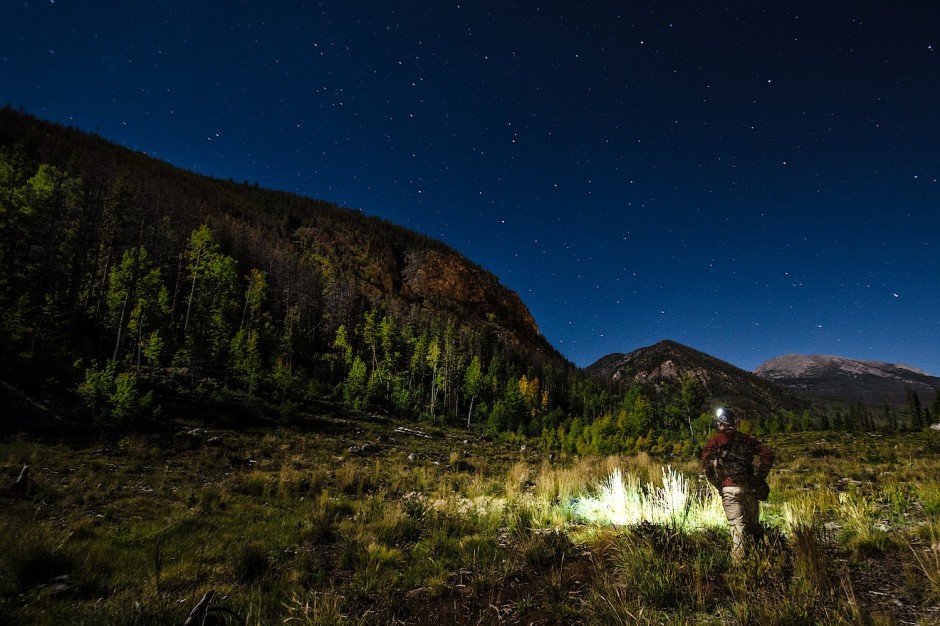 From the same night I thought I saw the “bear.” I was a bit embarrassed but stoked to see the shot. As I’d walked away I turned around and took a shot of the landscape, where you can see the locals’ bonfire casting a light on the trail leading up to Mount Royal. 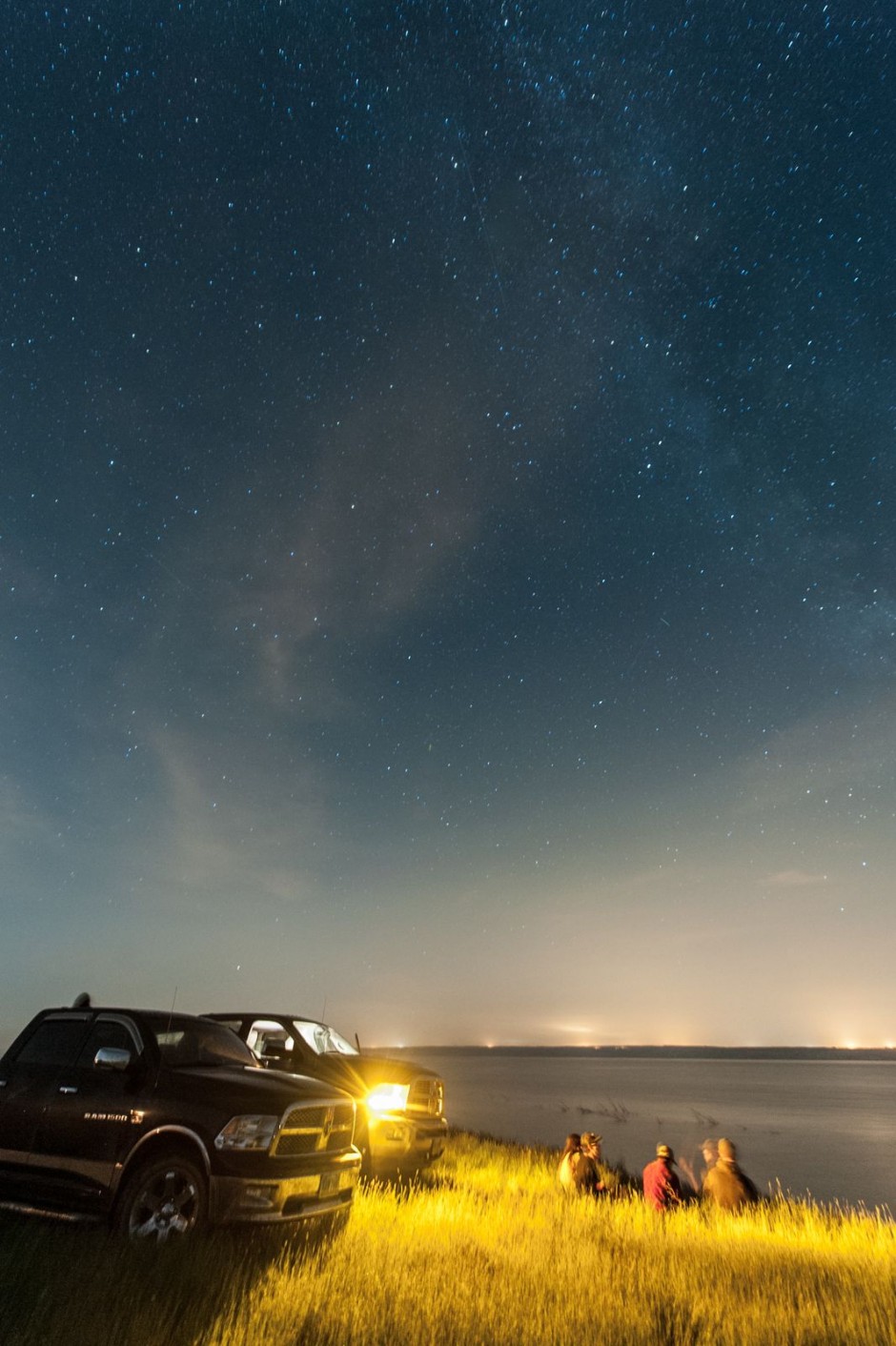 While getting some sleep after spending a very joyful 4th of July, I was abruptly awakened by a group of friends; we were going to their “secret spot.” It turned out to be a clearing a few hundred yards off a meagerly traveled road and overlooking Lake Sakakawea, the largest lake in North Dakota. I stepped back for a few seconds and made the shot. I can still remember the sound of my shutter shattering the quietness of the night. 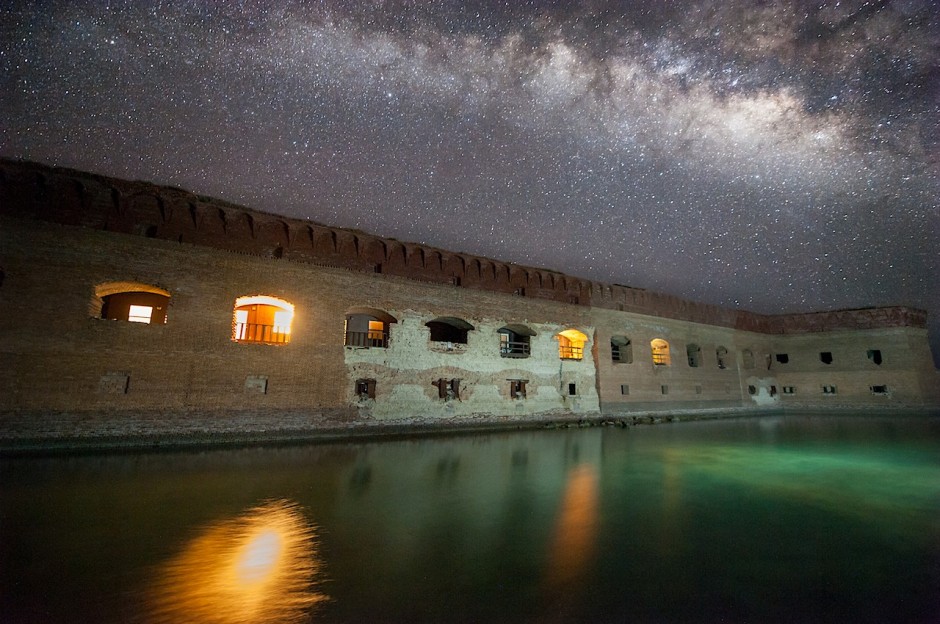 Located 70 miles off Key West in Dry Tortugas National Park, Fort Jefferson is the largest masonry structure in the Western Hemisphere, made up of over 15 million bricks. Originally a military fortress, it was converted to a prison during the Civil War.