THIS PAST MONTH, YOU MAY HAVE experienced a moment, while walking through a mall or driving in your car, when you thought, “Is there anyone on the planet who isn’t listening to Adele right now?” The answer was actually probably closer to zero than you’d think: iTunes is available in most of the world’s countries, but only 4 didn’t have “Hello” as the number one song in the month of November.

Each month, we put together some of the coolest maps on the internet. This month, we found maps that show us which states can expect to have a White Christmas, which countries have the highest numbers of atheists, which Europeans wash their hands the most thoroughly, and which countries ISIS thinks belong to the “coalition of devils.” And, of course, a map on which countries continue to deny the genius of Adele. 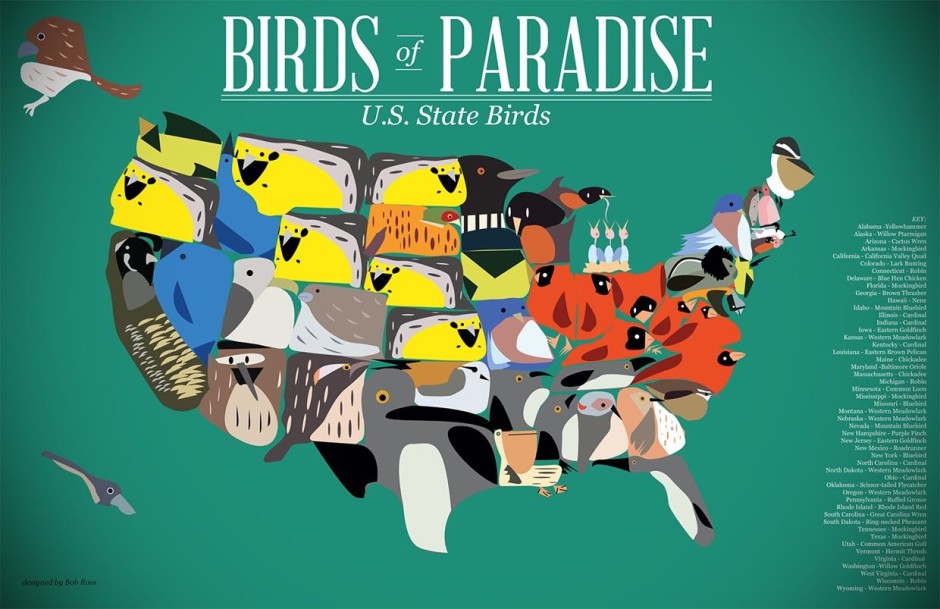 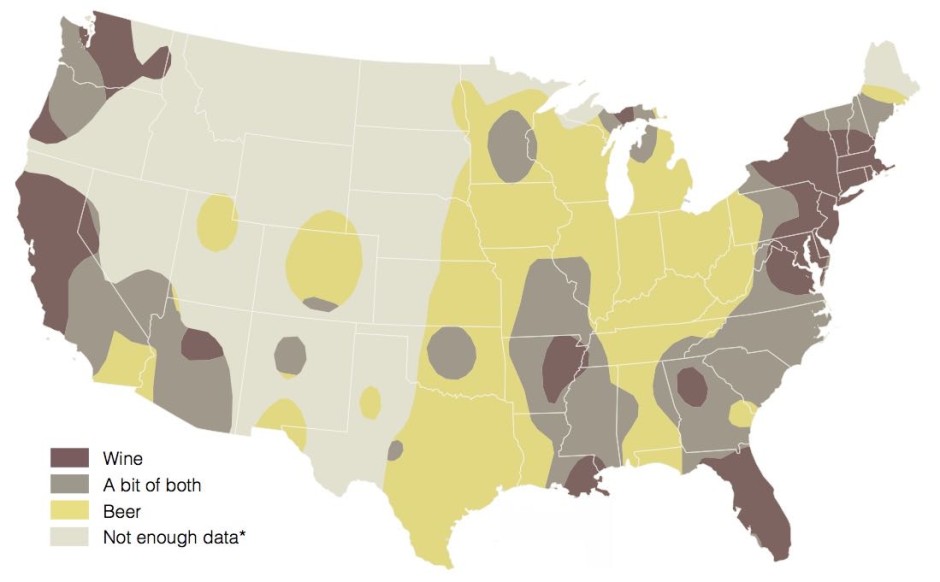 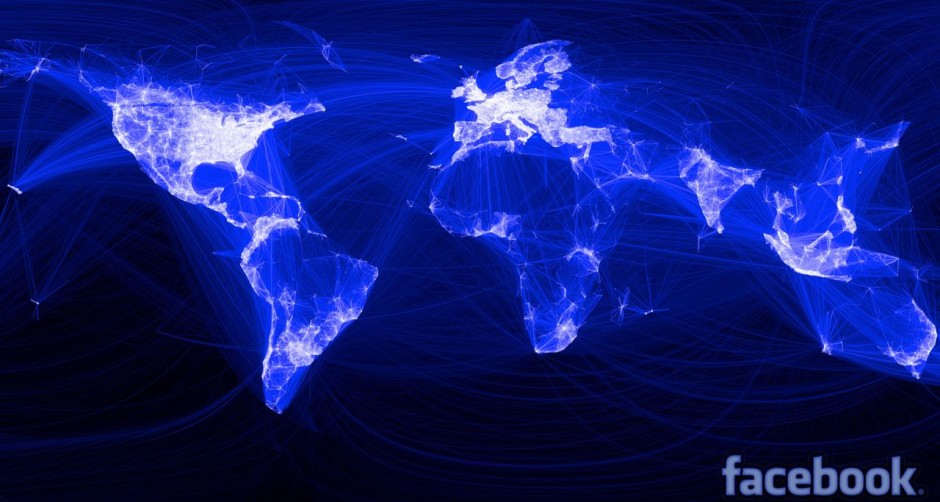 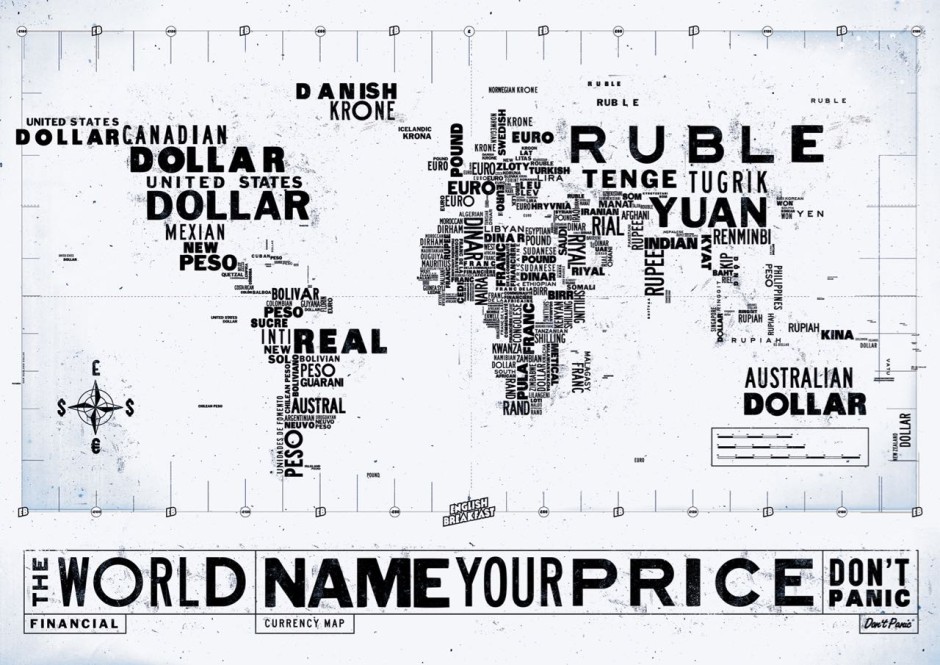 The currencies of the world's countries 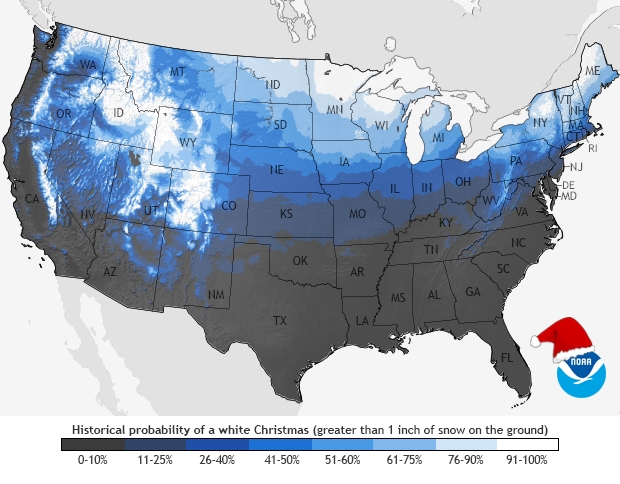 Who's reasonably dreaming of a white Christmas

Okay, so you're dreaming of a white Christmas. But how likely is that to happen? Via Reddit. 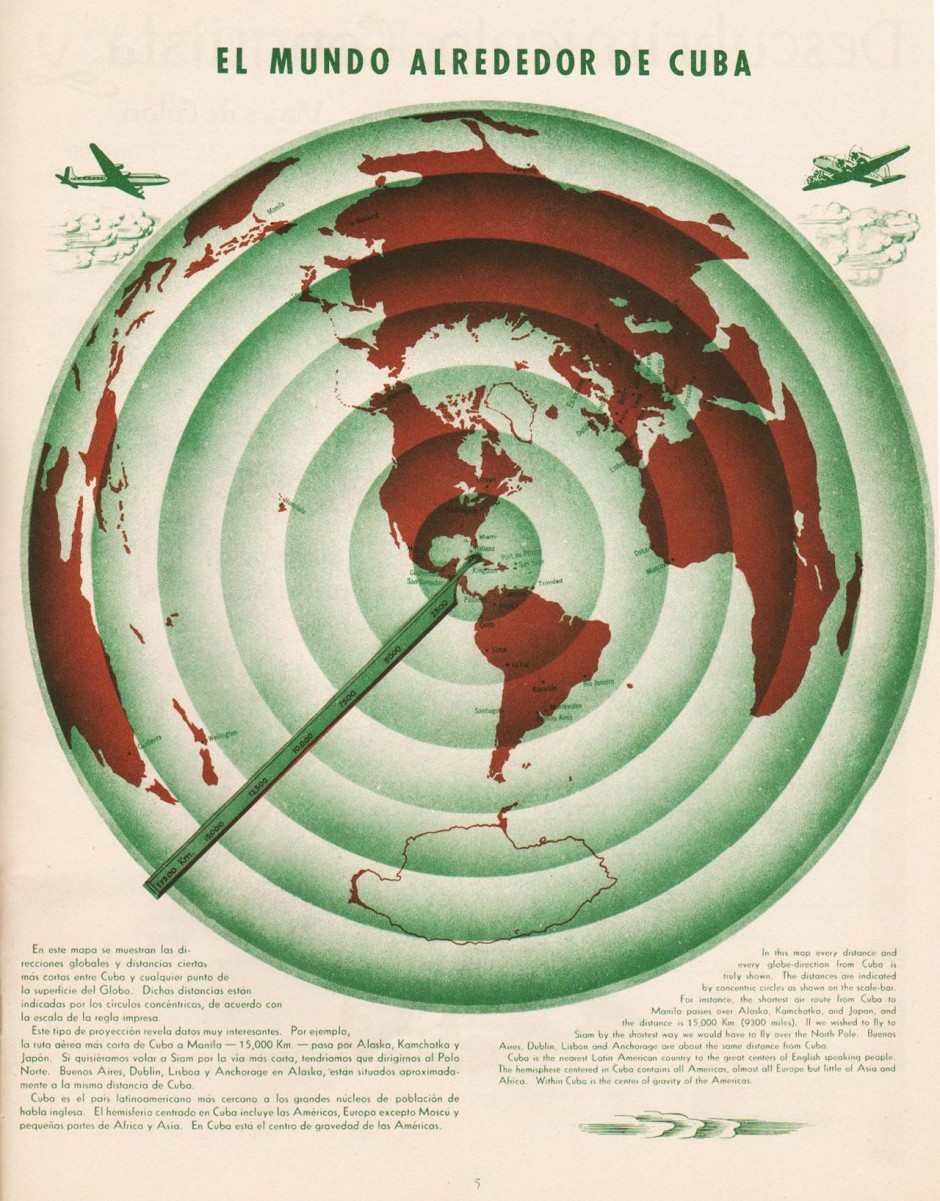 The world with Cuba at the center

Most maps show the UK at the center of the world. What if they showed Cuba instead? Via Reddit 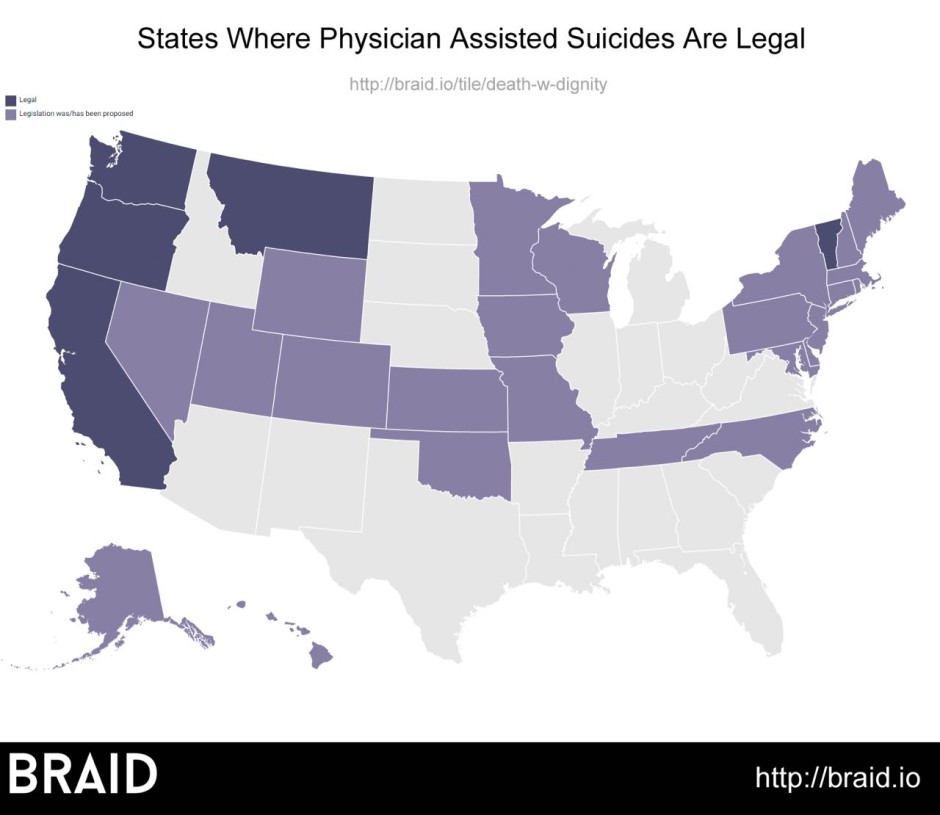 Where physician-assisted suicides are legal 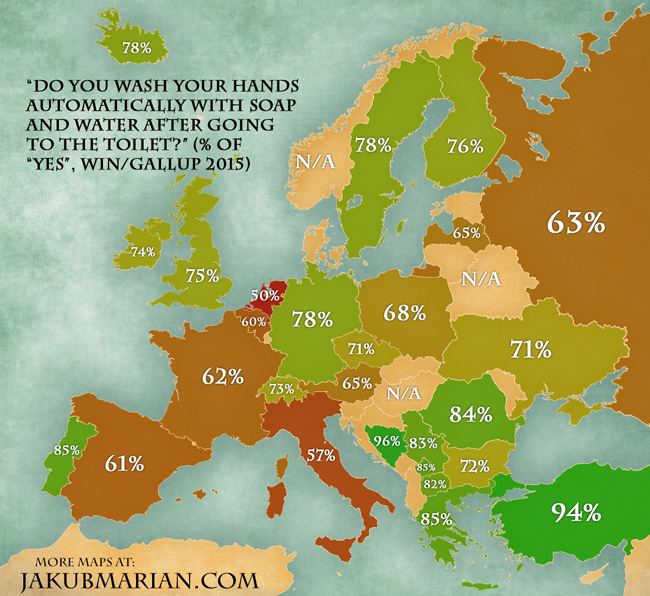 Which Europeans wash their hands with soap the most 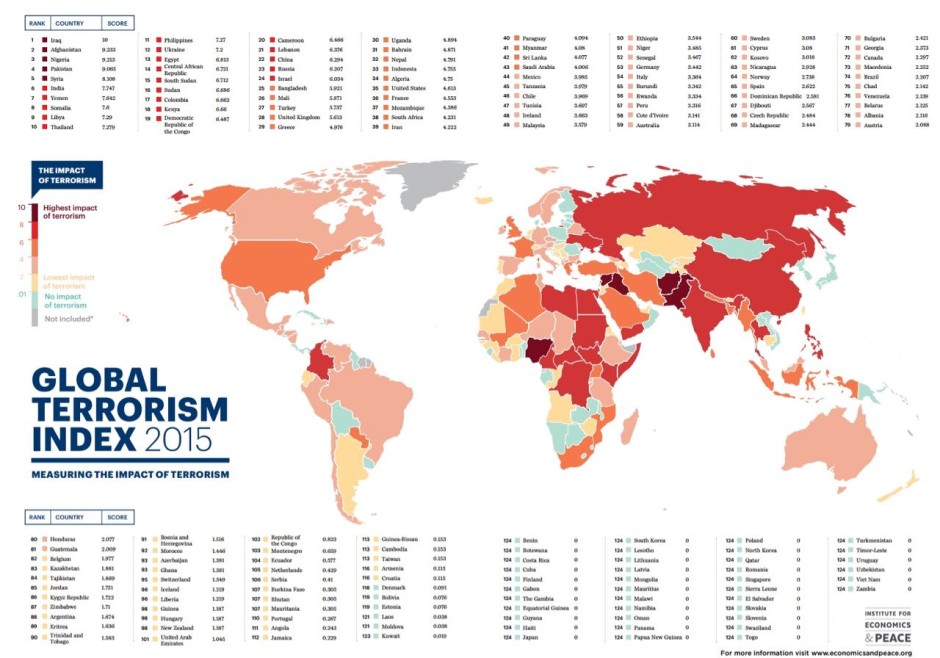 Where the impact of terrorism is the worst

From the report this is based on: "The Global Terrorism Index (GTI) is a comprehensive study which accounts for the direct and indirect impact of terrorism in 162 countries in terms of its effect on lives lost, injuries, property damage and the psychological aftereffects of terrorism." Larger version here. Via Reddit. 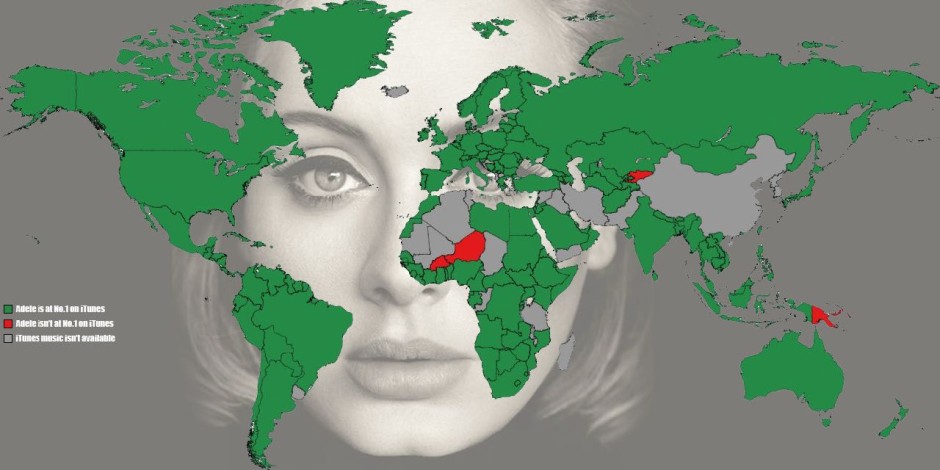 Where Adele's Hello was number one on iTunes

Niger, Burkina Faso, Papua New Guinea, and Kyrgyzstan were not quite as psyched about Adele as the rest of us. Via Reddit

The U.S. east coast has managed to stay pretty well forested, despite its population density. Via NASA 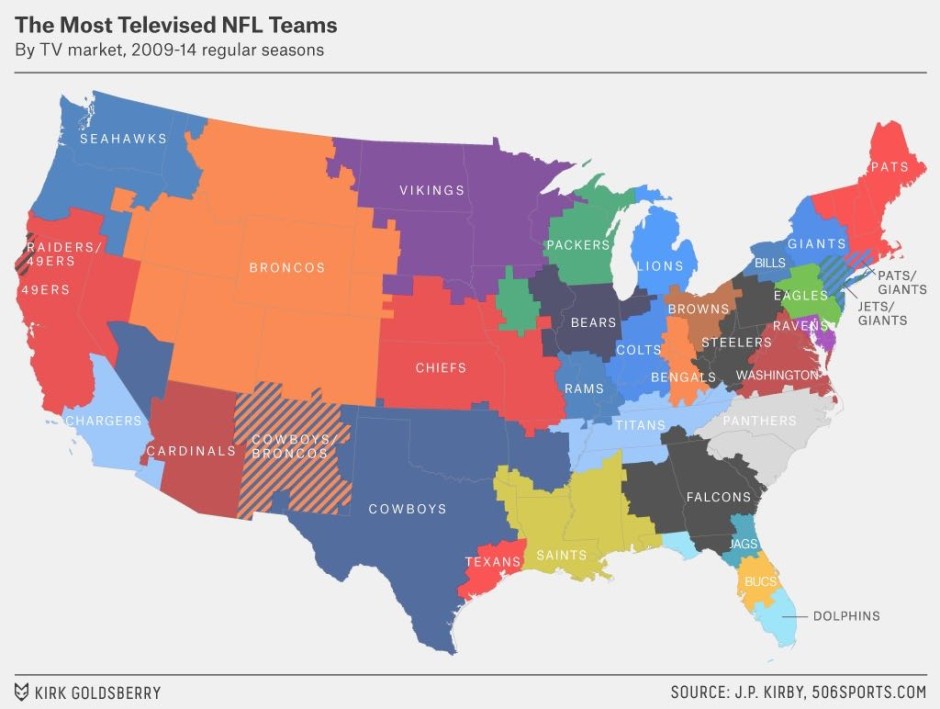 The most televised NFL teams by region 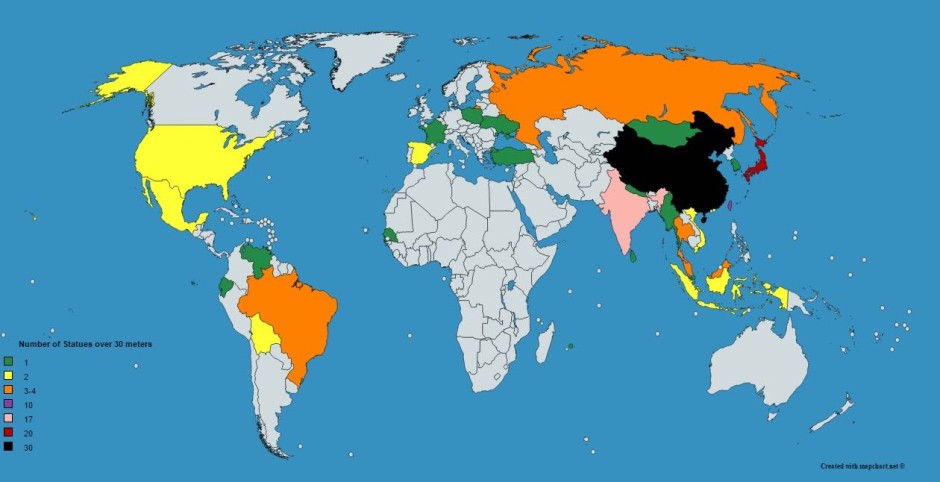 Countries by number of statues over 30 meters 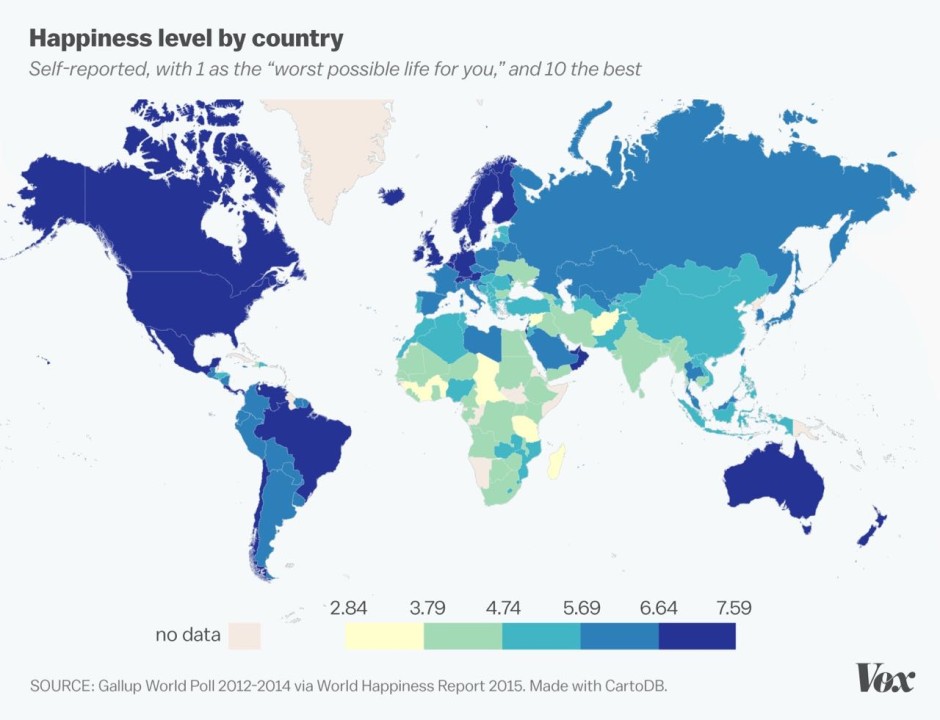 We should note that when polls are "self-reported," there might be a lot of people lying. Via Reddit. 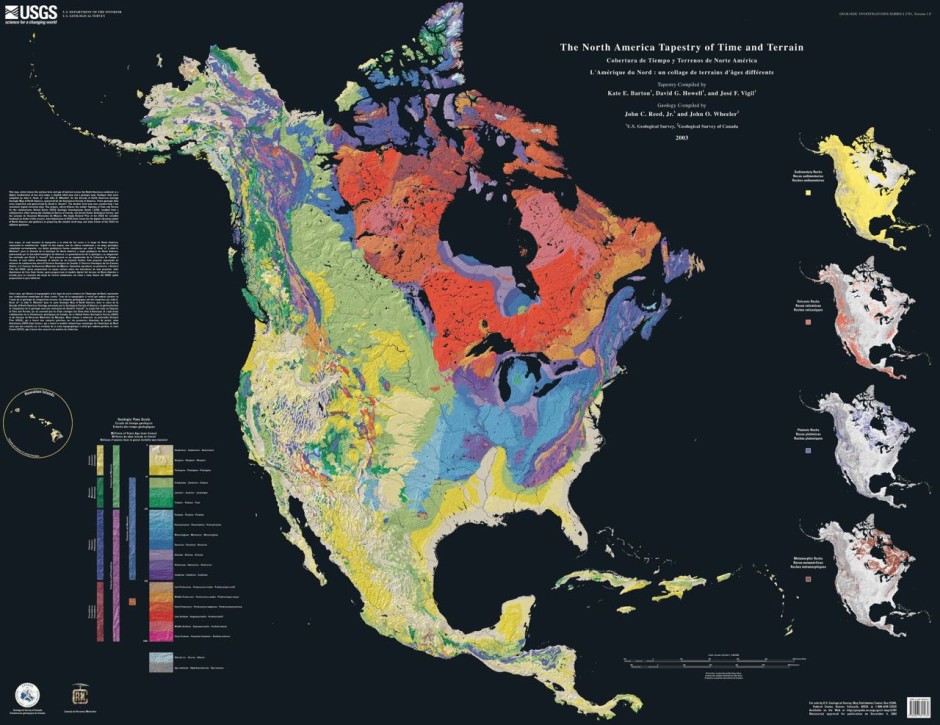 A larger map is available here, but in short, the redder/purpler the map is, the older the rocks. Via Wikimedia 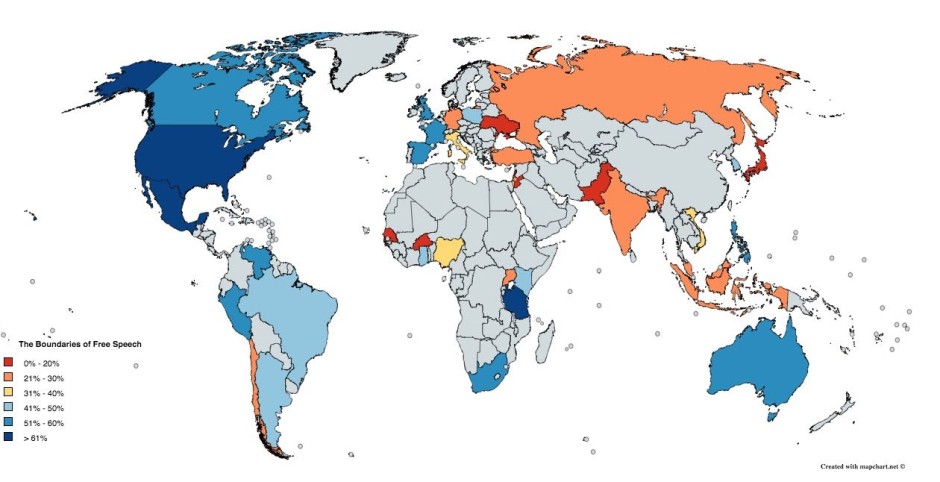 Countries that most agree with the statement, "People should be able to say offensive things to minorities publicly"

It's either a measure of freedom of speech, or of bigotry, depending on how you look at it. Via Reddit 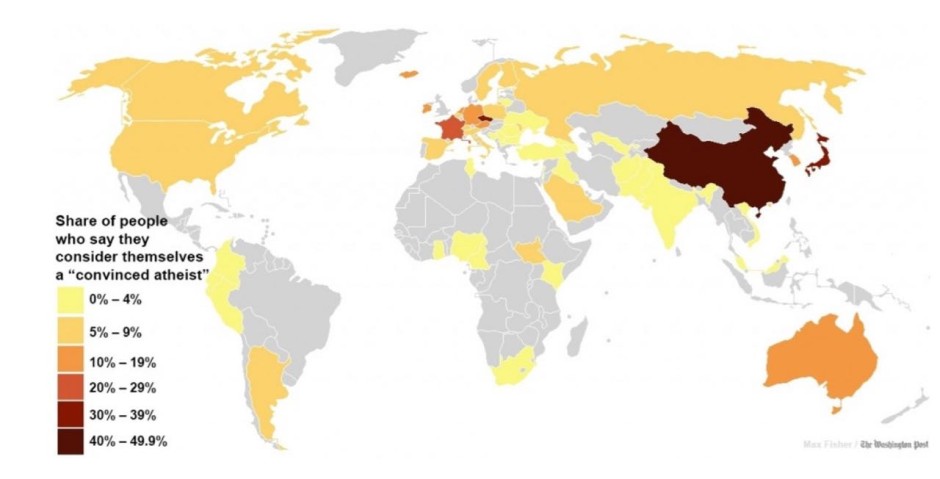 Where the convinced atheists are

"Convinced," incidentally, is not the same as being non-practicing or just generally irreligious. Via Reddit 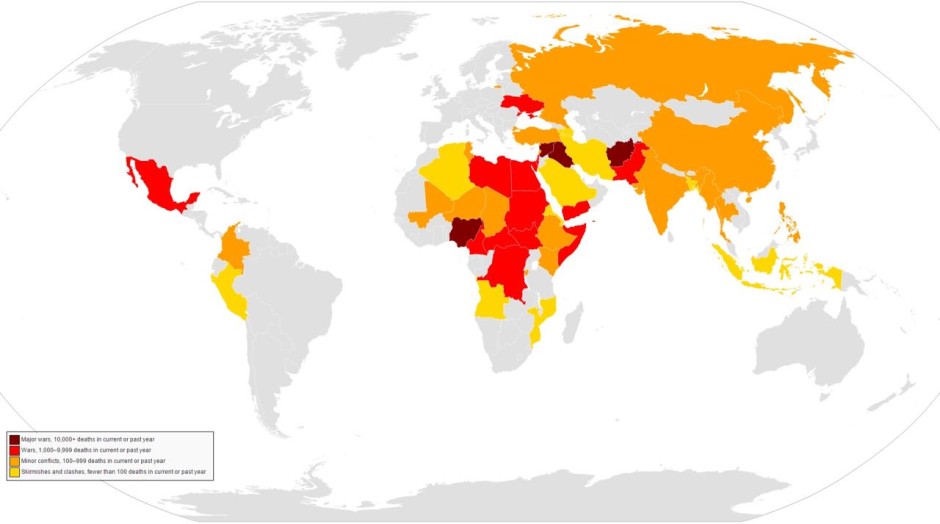 The world at war

Note: some of these countries have armed conflicts, but only in a small section of the country. Larger map here. Via Reddit. 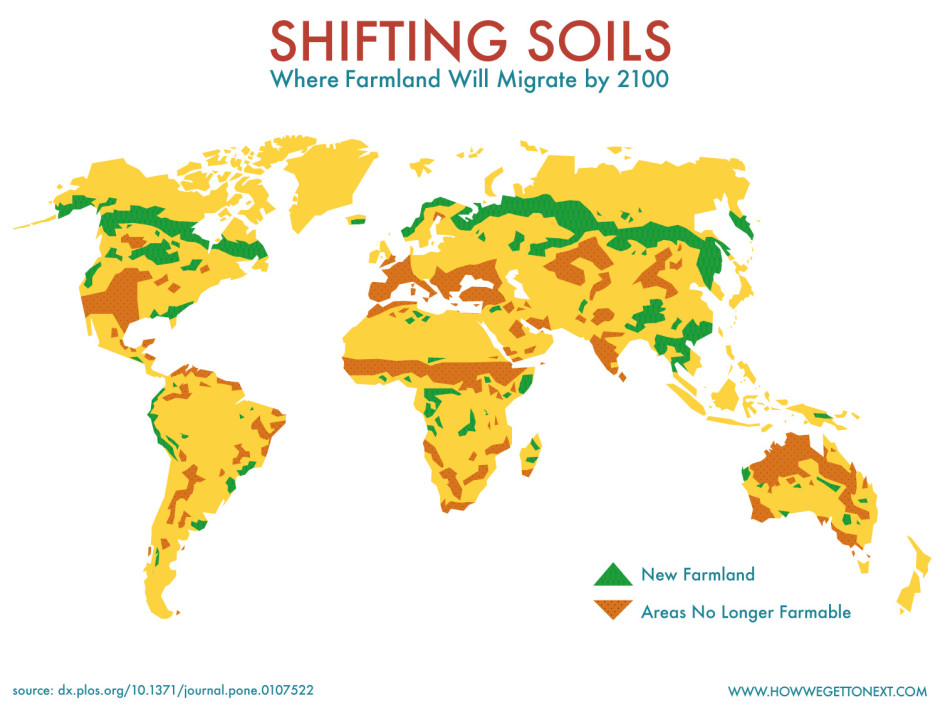 Where farmland will migrate by 2100

A slight clarification: the "Areas no longer farmable" is slightly misleading, as these areas may still be farmable, but will be less agriculture-friendly. Via Reddit.

The legality of cannibis worldwide 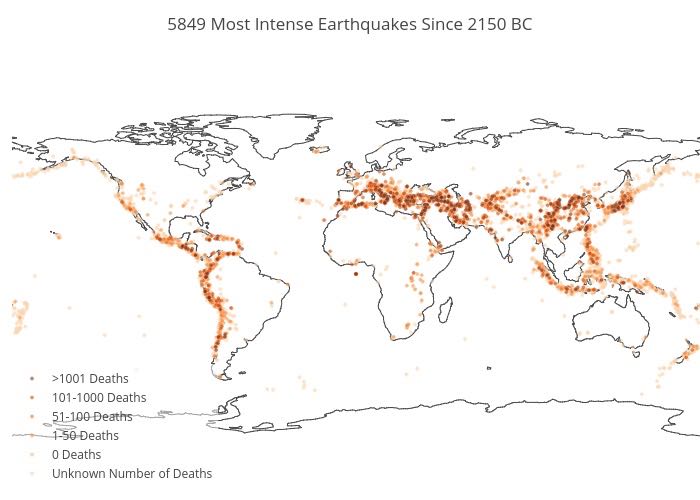 The deadliest earthquakes since 2150

Note: the title within the picture isn't totally accurate: earthquake intensity and their death tolls are not necessarily the same. But the information is still interesting. Via Reddit.

The "coalition of devils"

The "coalition of devils" according to ISIS. Via Reddit 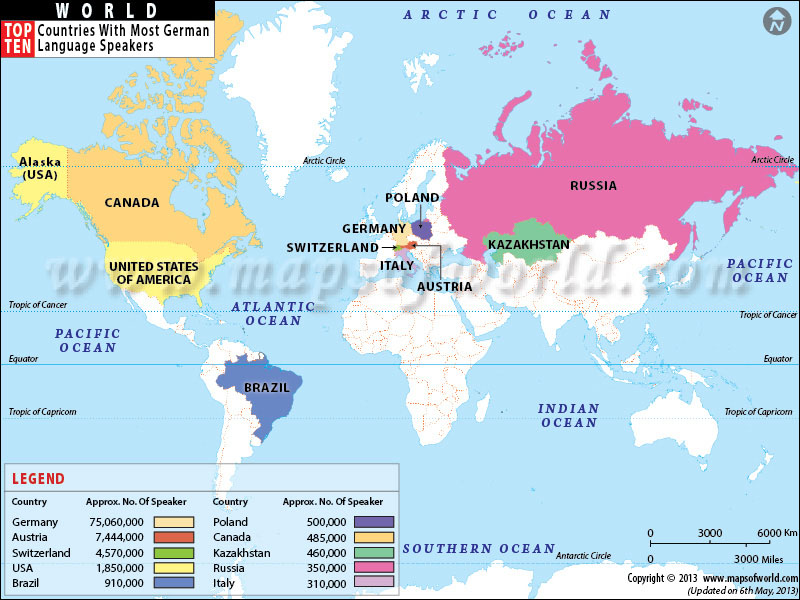 Countries with the most German speakers

Where has the German diaspora spread most to? Via Reddit

Number of venomous species by country

Which countries have the most poisonous animals? Via Reddit

Prison populations of the world per 100,000 people

Wait for the joke to land. Wait for it... Via Reddit 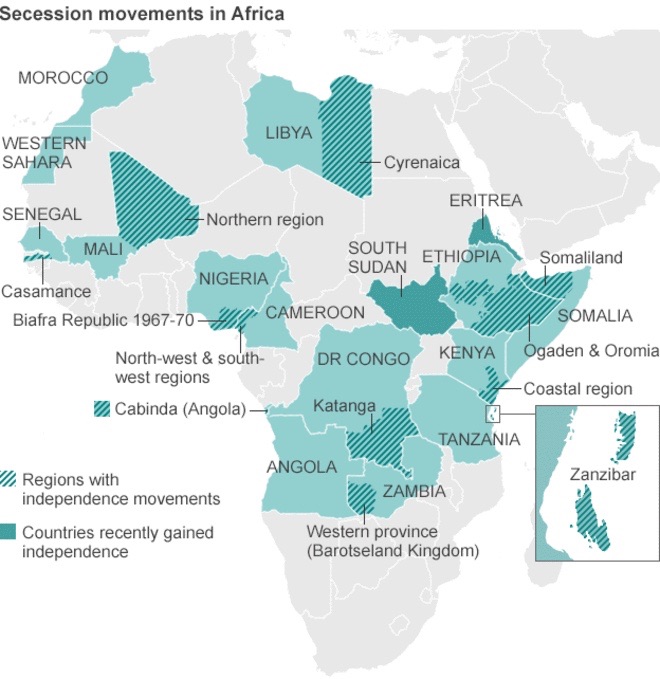 Which African countries have active secessionist movements? Via Reddit 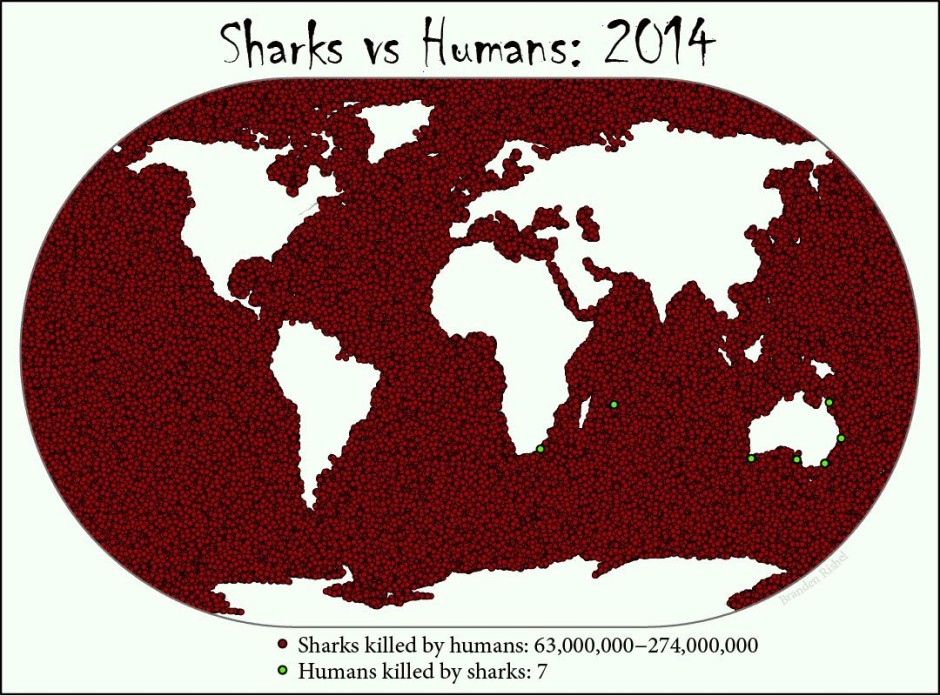 In the war between sharks and humans, who is winning? Via Reddit