The Kalahari is an arid region spanning three African countries: Botswana, Namibia, and South Africa. It is best known as the home of the ancient San people, who exist mostly in memory due to extermination and modernisation. Their descendants populate this region very sparsely, along with a few Herero, Tswana, and Nama populations. Namibia and Botswana vie with Mongolia for the status of being the least densely populated countries on Earth.

Last December, I circled the Kalahari by motorcycle, my favourite way to travel. My aim was to get a true sense of the contemporary culture, and I thought the Christmas period an interesting time to visit. 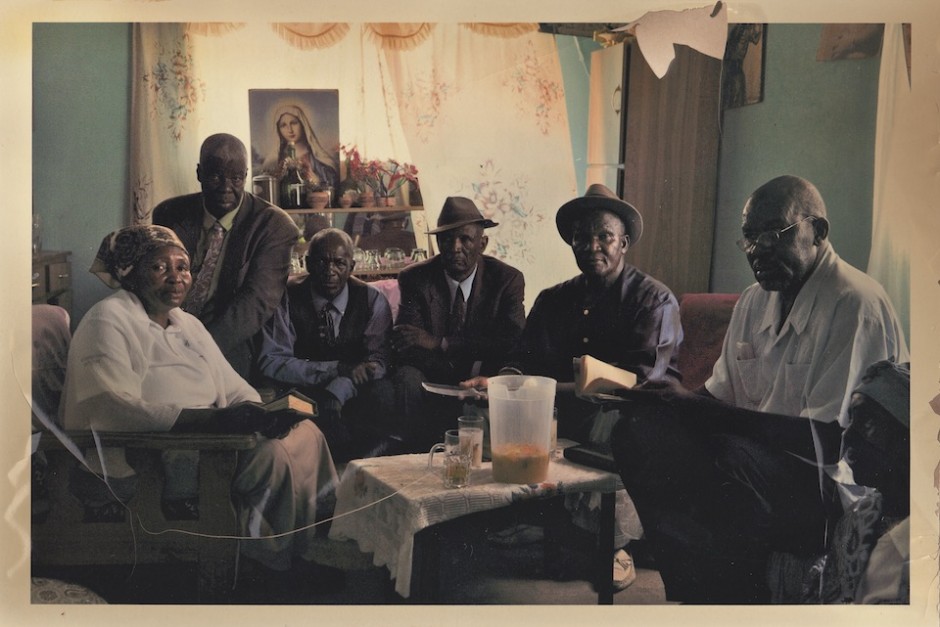 ...means people are often extremely happy to meet you. Within minutes of arriving in the Southern Botswana town of Tshabong, I was invited to spend Christmas Eve with a local family. They were less of the Christian persuasion and more interested in partying. I had the time of my life, but on Christmas Day, hungover and dehydrated, I had to stop for a break in a village where a proper Christmas celebration was taking place in a prominent man's home. I was welcomed to join in and offered shade, lunch, and renditions of classic hymns and Bible readings. 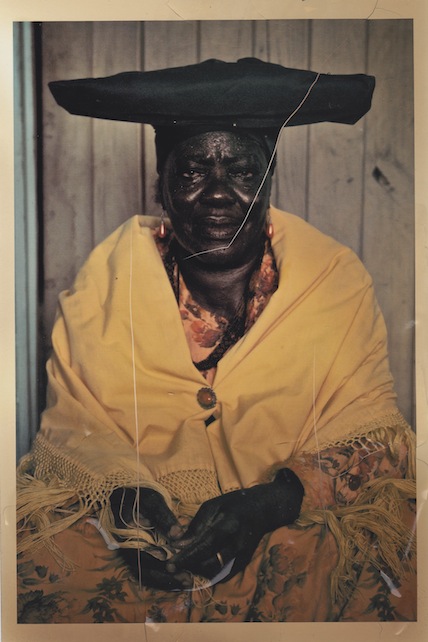 ...of the village were Herero, and some of the elder women wore elaborate traditional dress -- a holdover from the Victorian era of white settlers dressing in the European fashion, layer upon layer of petticoats under heavy, decorative cloth, all in the interest of decorum, despite the incredible heat. 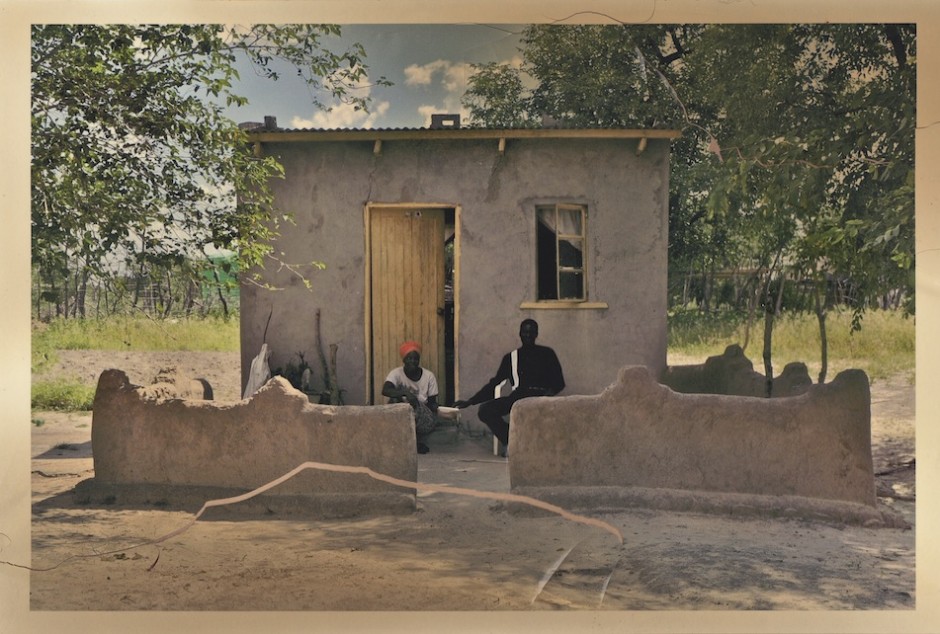 ...of Botswana, the Okavango Delta spills out onto the plains, populating the land with wildlife and attracting tourists from all over the world. In the early mornings, Tswana river guides steer European foreigners between hippos and crocodiles in slender boats dug out from tree trunks. The height of the day is spent in the shade. Here, a river guide rests outside his mud home, sharing a modest lunch with his wife. 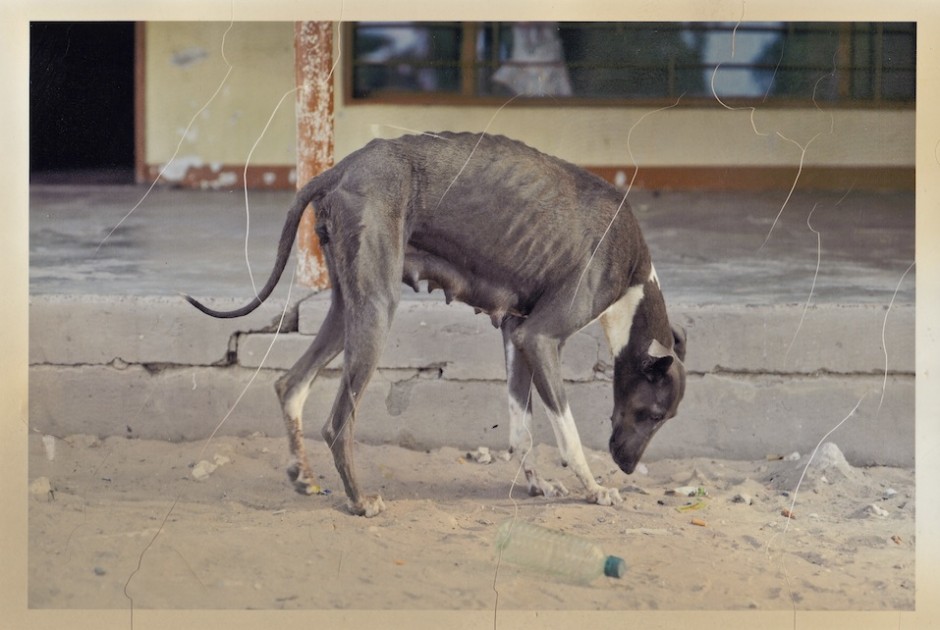 ...there is little natural sustenance for man or beast beyond the watery delta. I don't know where this bitch's puppies were -- perhaps waiting for her to return so they could feed, perhaps dead. She was clawing at the sand outside a small shop along the road, sampling everything from bottle caps to sweet wrappers in a desperate search for food. It reminded me of how easy it now is for someone to buy sustenance in a shop such as this, but then how the San people must have struggled before this. 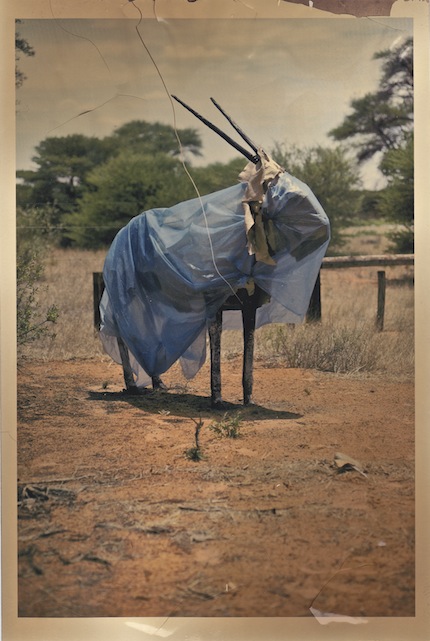 The only wild animal

...you are likely to see outside of the scant shade is a dead one, or not one at all. This iron sculpture of a gemsbok formed part of an installation of metal creatures, including buffalo and kudu, at a remote campsite in the south of Botswana. Newly delivered, it was still covered in cardboard and plastic wrapping. It seems these iron creatures were the only ones suited to being here, as there were no live creatures in sight and no water in or near the camp. I did not linger and travelled 190km to the next settlement -- little more than a petrol station at an intersection on the road to Namibia. 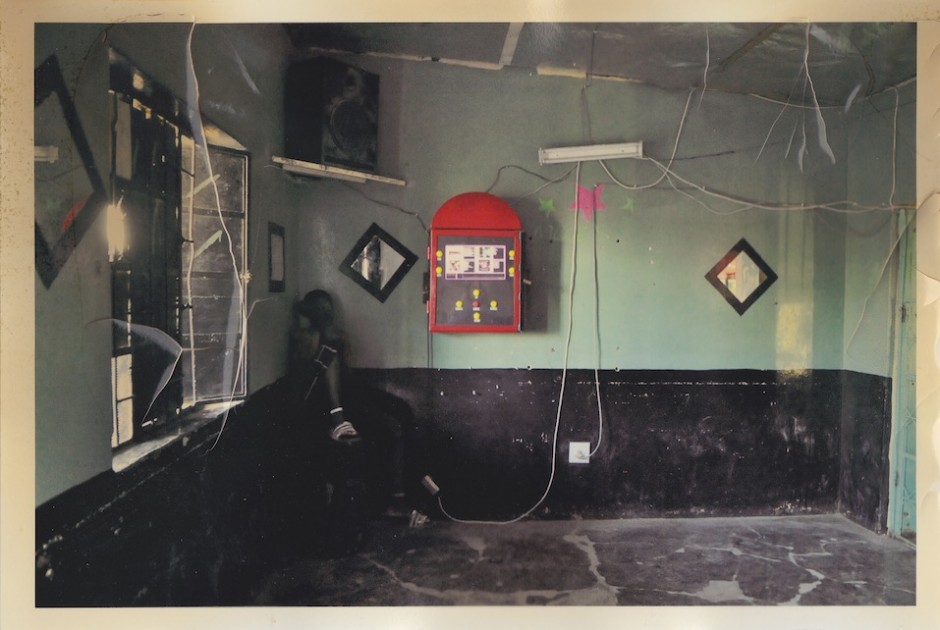 ...is a small settlement of about 1000 Nama people in the south of Namibia. There is a general store, a police station, a liquor store, and two bars that pump music from digital jukeboxes. Rihanna is big here. So is Chris Brown. Alcoholism is rife. Very few residents are employed and many spend the hot nights -- and their government subsidies -- shuffling between the bars and the liquor store. 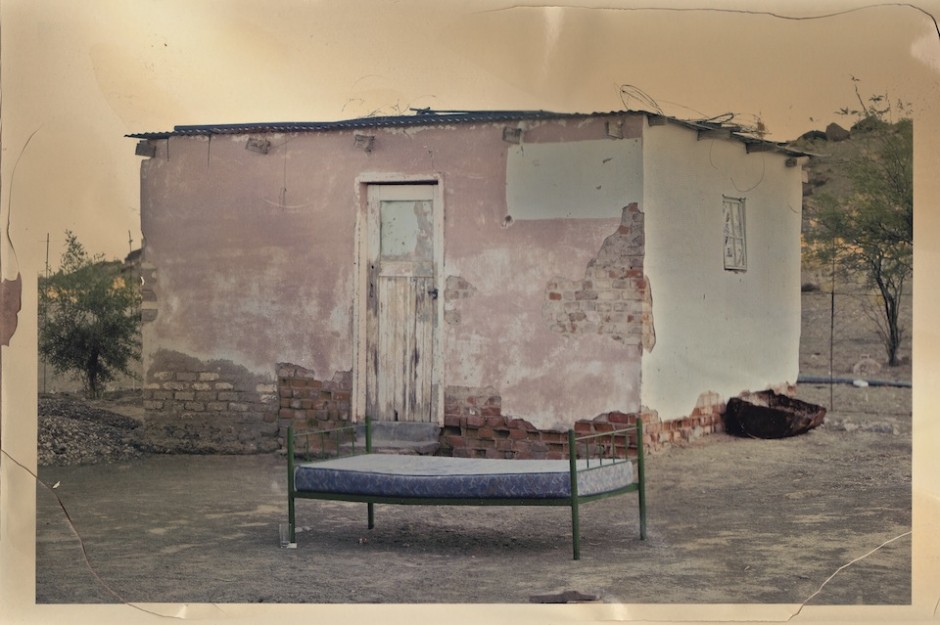 For a small fee

...a very kind lady offered me accommodation at her family home. Like most people in this decrepit town, they carried beds outside to avoid the heat, and we slept under a haze of mosquitoes that came from a nearby sewer. The next morning, I brought up the subject of employment with my host. She owned a farm not far from here and I asked her why more people didn’t work the land to grow food and earn a living. “They are too drunk,” she said. “They waste all their money on booze.” The sad truth was she owned the liquor store and her house (not pictured here) was the best one in Tses, by far. 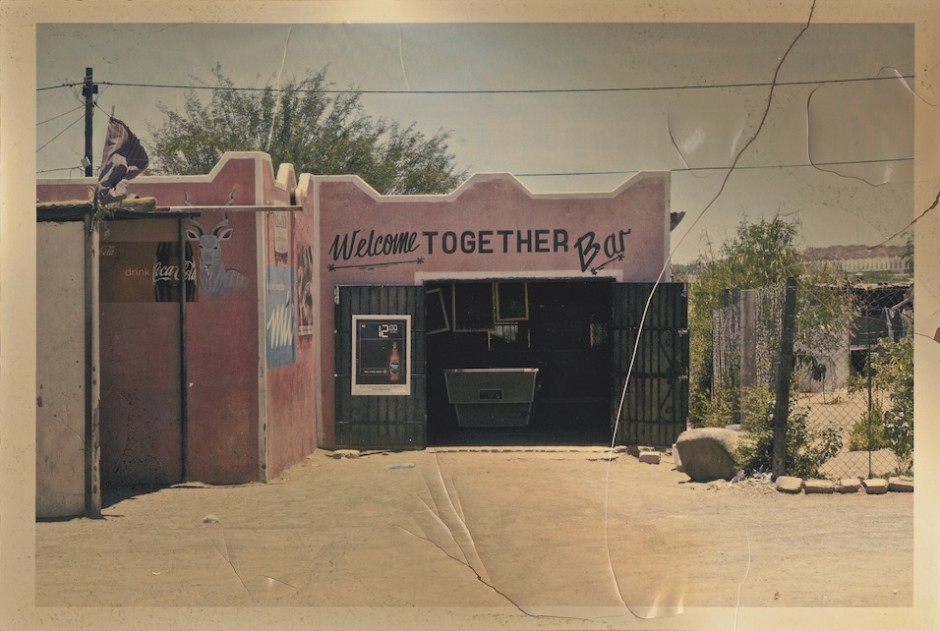 The larger town of Keetmanshoop

...lies a little farther south. Named after German founder and industrialist Johan Keetman, it means “Keetman’s hope.” It may be more prosperous than Tses, but the wealth lies predominantly with the white population, ancestors of German settlers and some Afrikaaners from South Africa. A road and rail line divides the town, the whites living on one side, the Nama on the other. 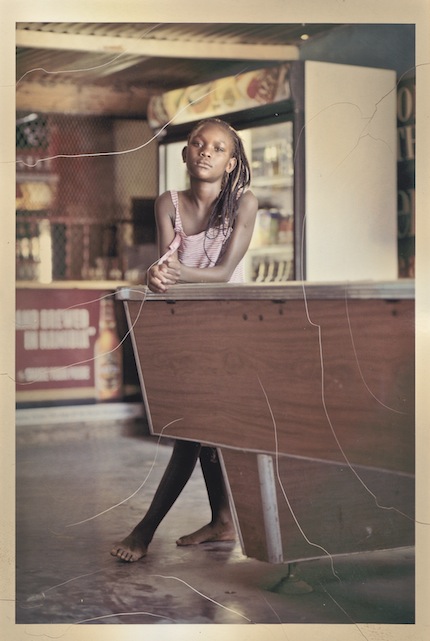 ...are busy at night. All within earshot of one another, the blaring music creates a mash-up in the streets: Tina Turner and 50 Cent; Luther Vandross and the Nigerian duo P-Square. School is out and some children shelter here from the sun during the day. 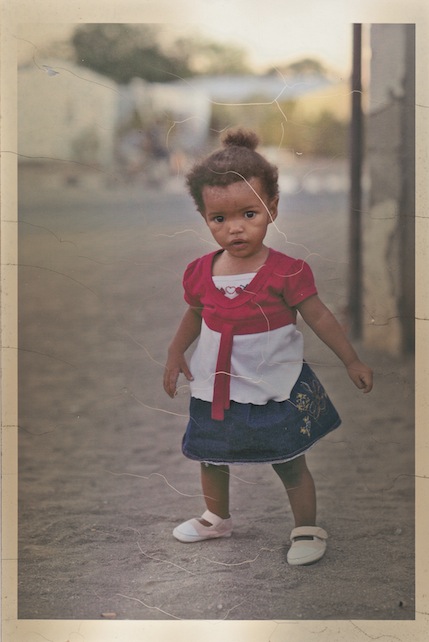 ...to the bars, where they play with other kids while their parents (or minders) drink with friends. The presence of kids gives the bars a strange status; an uncomfortable sense of community presides. 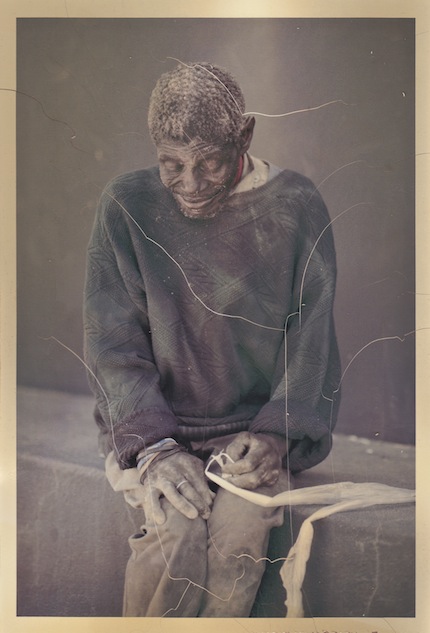 ...wanders Keetmanshoop's blazing streets, mumbling to himself. He stops to rest in the shade. I ask if I can take a photo of him and he agrees, but first he scoops a handful of dust from the ground and smears it over his hair and face. The shutter clicks, I thank him, and he wanders back into the blazing sun. Perhaps the dust protects him. 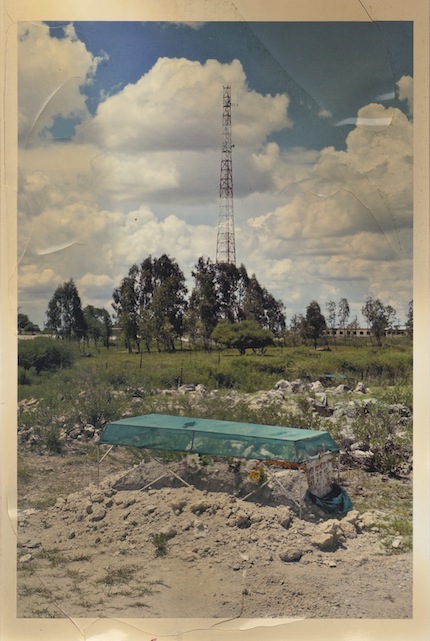 ...is the sun here that one takes the memory of it to the grave. People long departed are covered with shade cloth to ease their time in the baked dust. The summer temperature often reaches 47°C (116°F). 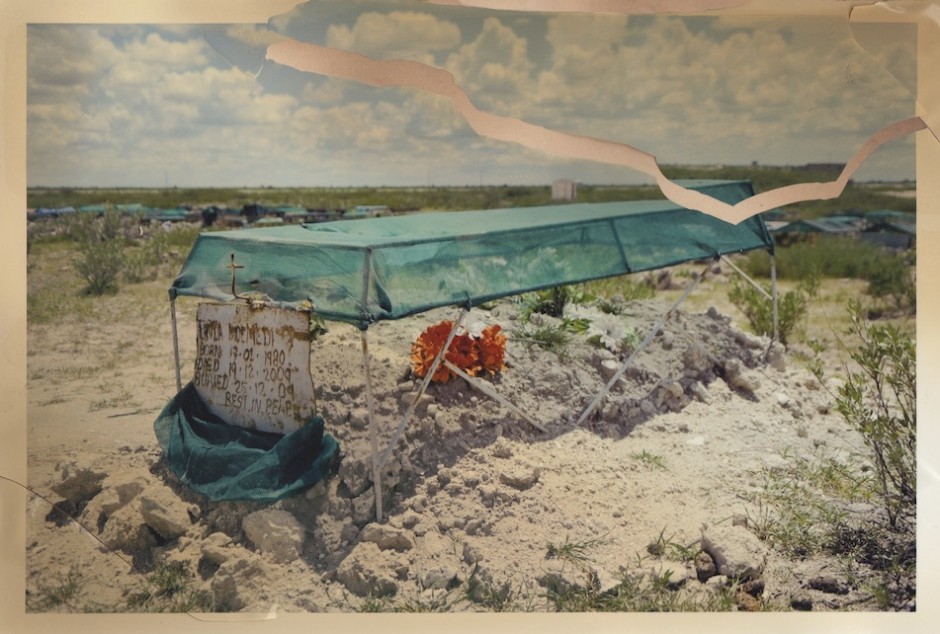 Most of the graves

...are well cared for. The shade cloth is replaced regularly and flowers are placed on the grave -- fake ones, mind you, as fresh flowers would hardly last a moment in the heat. The attention given to the dead reveals respect and superstition.

Tagged
Culture Guides Botswana Namibia
What did you think of this story?
Meh
Good
Awesome

People of the Earth: San tribe

Botswana is reopening to international tourism on December 1

Traveling to Africa for the first time as an African American

This is how Namibia is nailing sustainable tourism