View all travel news
Top Destinations
Top CitiesView All Destinations
Trending Regions
Trending Cities
Load More
Matador sends a team of journalists over 6000 km round trip through Patagonia to investigate a private effort to protect one of the last regions of wilderness on the planet.

IT TAKES A LONG TIME to get to Patagonia. If you can afford airfare to Balmaceda from Santiago (check LAN), that shortens it a bit, but for most people it’s gonna be long bus rides, plane rides, ferry rides. Long stretches of twisty Carretera Austral on the Chilean side, or the empty pampa seca of Ruta 40 in Argentina.

And this is as it should be. It gives you time to think about distances, remoteness, about what it takes for a place to remain relatively untouched.

On the other hand, this remoteness, this sense of a place being literally at the end of the earth, makes it vulnerable, “out of sight, out of mind.” Back in May of this year, a local environmental committee voted unanimously (with 1 member abstaining) to approve HidroAysén, the largest hydroelectric project in the history of Chile. If constructed, the proposed dams would flood large sections of the Rio Baker (among others) and impact large areas of Aysén province, including national parks, reserves, and wetlands, via the construction of a transmission line thousands of kilometers long to power mining operations in the north of the country.

The decision resulted in protest on a scale not seen since before Pinochet, and in June a court of appeals in Puerto Montt ordered HidroAysén to suspend the project, an unprecedented victory for environment over big business in Chile. But fittingly, as this place, this story seems so far away from everyone not in the Southern Cone, both the protests and the victory gained virtually no traction in international media (Matador actually has the top-ranking news story for “HidroAysén protests”).

Bordering the confluence of the Baker and Chacabuco rivers is the site of the future Patagonia National Park. Once an estancia or large ranch, the property was purchased by Conservación Patagonica in 2004. The plan is to unite this property with two contiguous national reserves, Jeinimeni and Tamango, into a single national park by 2017.

Overall, the juxtaposition–the biggest rivers, the biggest dam project, some of the last remaining wildlands, the efforts to protect and restore biodiversity, the conversion of local economies and culture from sheep grazing to tourism–compelled us at Matador to investigate firsthand what is happening here. Patagonia is the first ever Matador Project, with interviews, articles, and video forthcoming.

In the meantime, please enjoy some of these early shots (many of which are video screen grabs) from the project, and stay tuned for more soon. 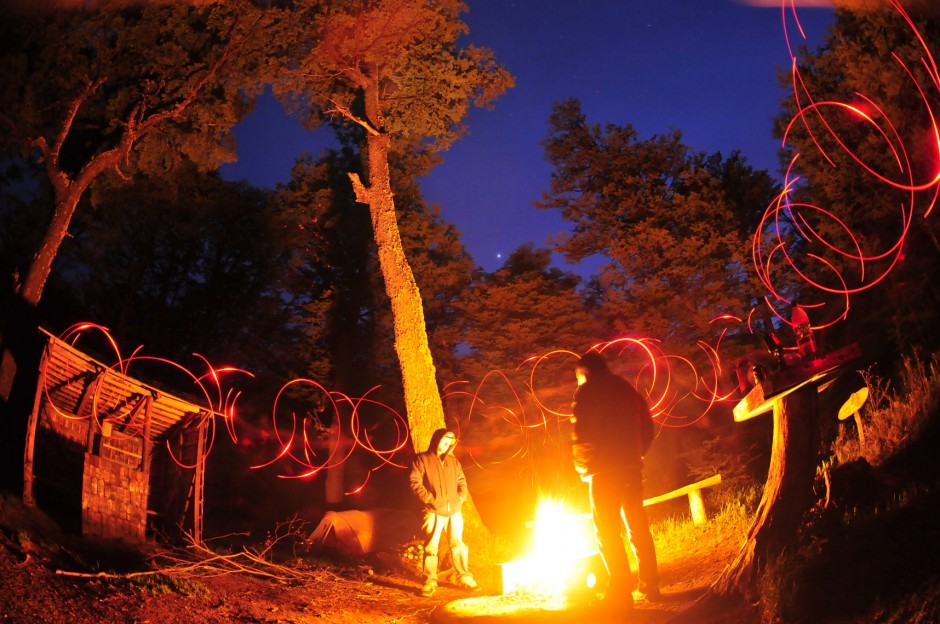 We arrived at Reserva Nacional Cerro Castillo after two days of driving from Santiago to Pucon to Puerto Montt, then 20 hours aboard the ferry, then another six hours of driving. We were too tired to explore and basically just set up camp, decompressing, playing with Claudio's headlamp and a long exposure setting. There were six immaculate campsites here in a dense forest of lenga trees, and nobody else around. 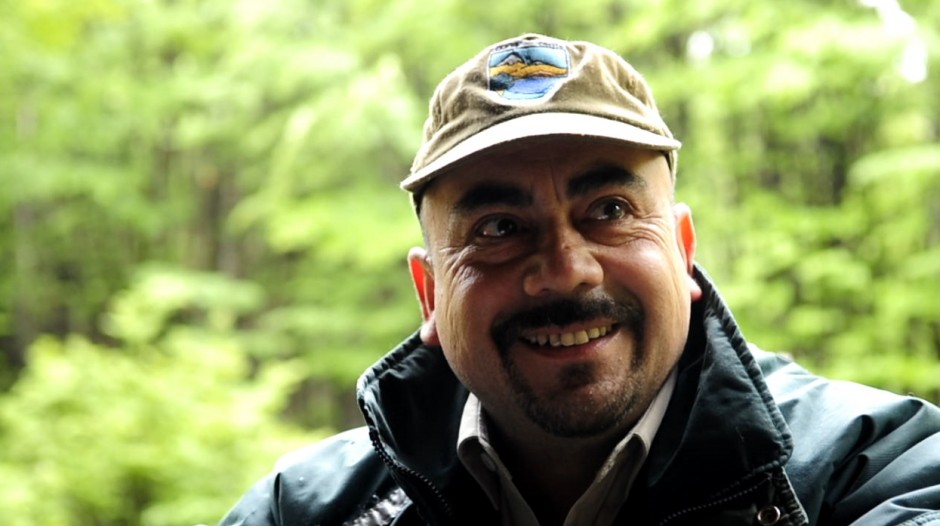 The next morning we filmed an interview with local park ranger Luis Montesino. He's one of only three rangers assigned to a reserve that's nearly 180,000 hectares, or almost half a million acres. Stongly opposed to the proposed dams in the region, he explained how, as with reserouce extraction such as timber, hydropower projects would not have any long-term economic benefit for locals, and that "the region's vocation had to be tourism." 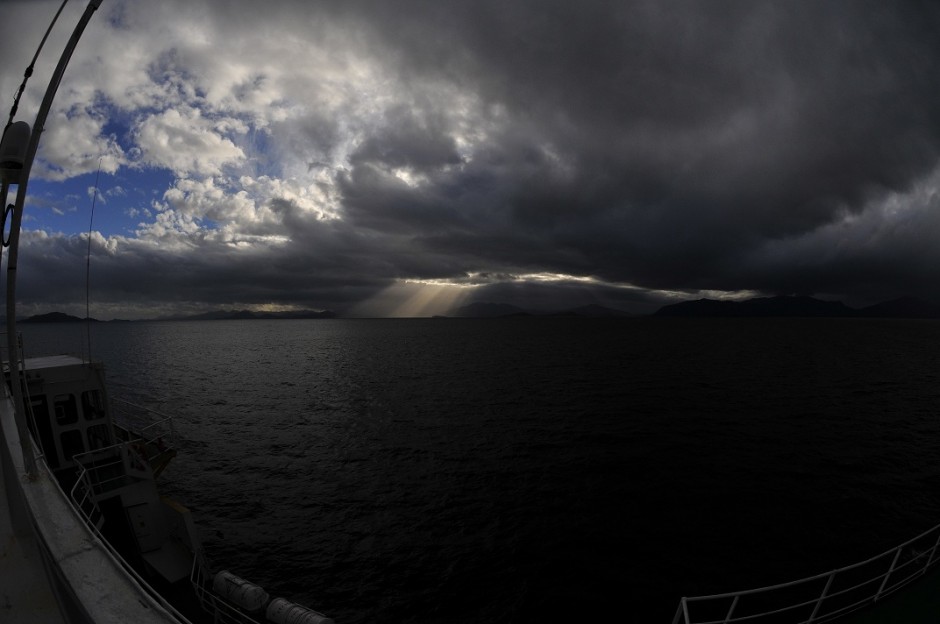 The ferry Amadeo I transports mostly camioneros, or truckers, from Puerto Montt down to Patagonia. The passage is mostly calm, taking place within inland waterways, except for the midpoint of the voyage, where you enter the Gulf of Corcovado, which is exposed to the open ocean. This photo was several hours after we'd passed the gulf and entered the calmer Canal Moraleda. The islands in the background are part of the Archipelago de Los Chonos, named after indigenous peoples who once lived here and, as the ferry pilot explained, would navigate these massive waterways in cedar canoes. This entire passage has epic unexplored possibilites for climbing, paddling, and surfing. 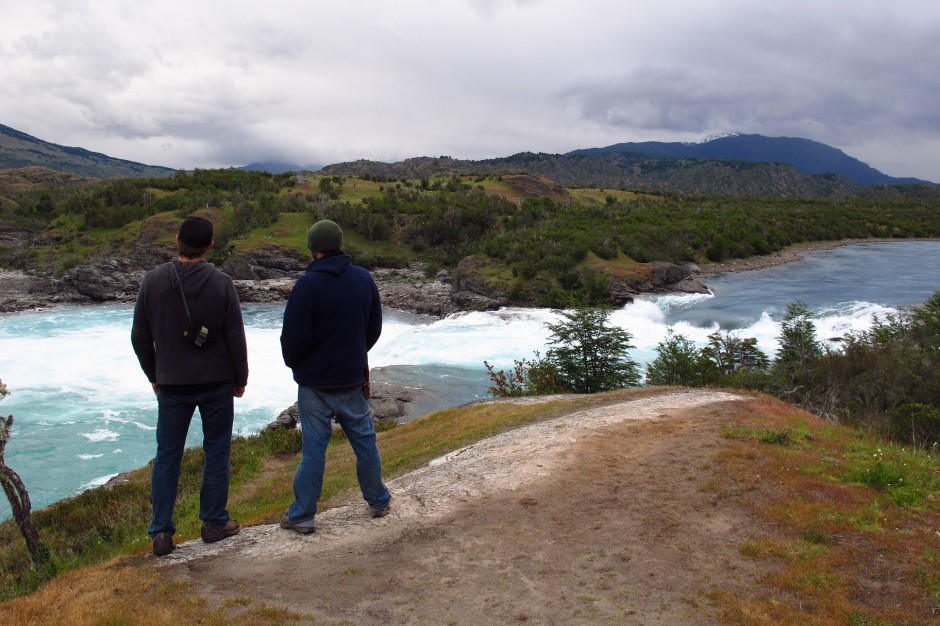 Confluence of the Baker and Nef

Adam French and I standing at the confluence of the Baker and Nef rivers in Aysen province, Patagonia, Chile. The entire trip down--nearly four solid travel days--seemed to build up and then release into this moment. The scale of this place is impossible to capture / describe. The Baker is the largest river in Chile, and this particular confluence is one of the most powerful places I've ever seen. As we approached, there was a condor planing back and forth along the low ridgelines. One of HidroAysen's proposed dam sites is just a few kilometers downstream from here. 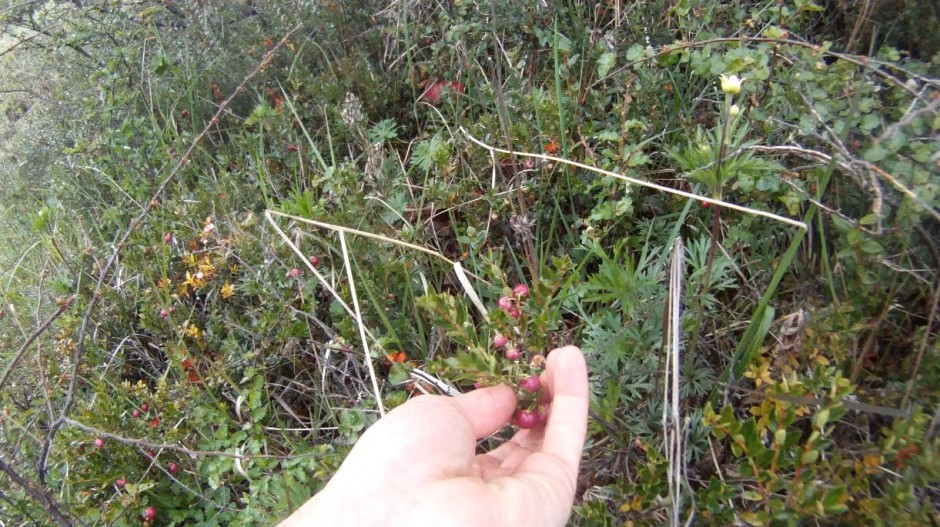 Throughout Patagonia, in damp and shaded slopes, especially along rivers, you'll find Chaura berries, aka Prickly Heath (pernettya mucronata). They have a delicious, slightly strawberry-like taste. 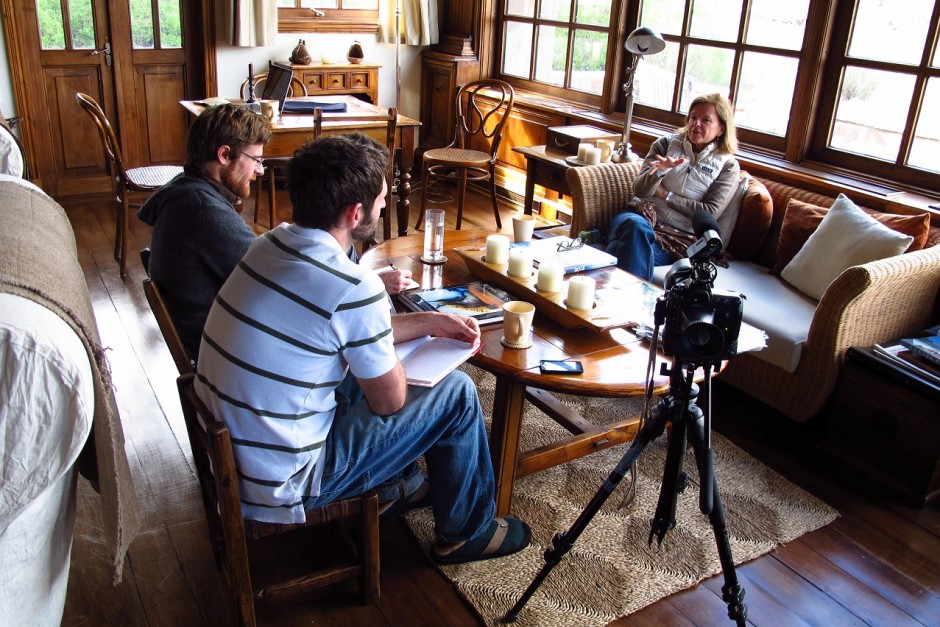 Kris Tompkins, former CEO of Patagonia, Inc. and founder of Conservacion Patagonica, a land trust for preserving wildlife biodiversity through the formation of national parks. Along with her husband Doug Tompkins, Kris has helped preserve nearly two-million acres of land. "Whatever happens with the dams," she said, "Chilean expression, political expression, has been changed forever." 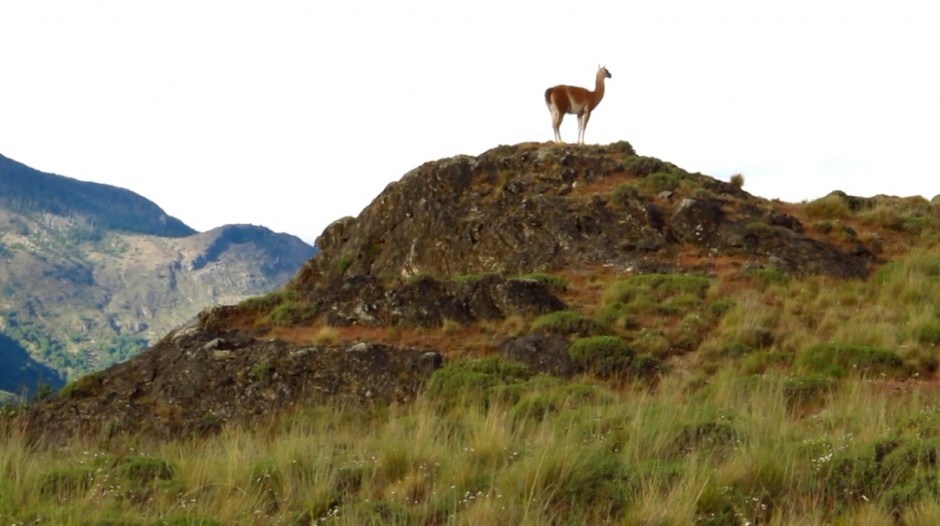 On the drive into the future Patagonia National Park, we passed numerous herds of guanacos. Up until its purchase in 2004, the majority of the park site was the 173,000-acre Estancia Valle Chacabuco, formerly one of Chile's largest sheep ranches, and an area of mass overgrazing. The project is one of the only sites where semi-arid Patagonian steppe--native habitat to guanaco and the endangered huemul deer--is protected. 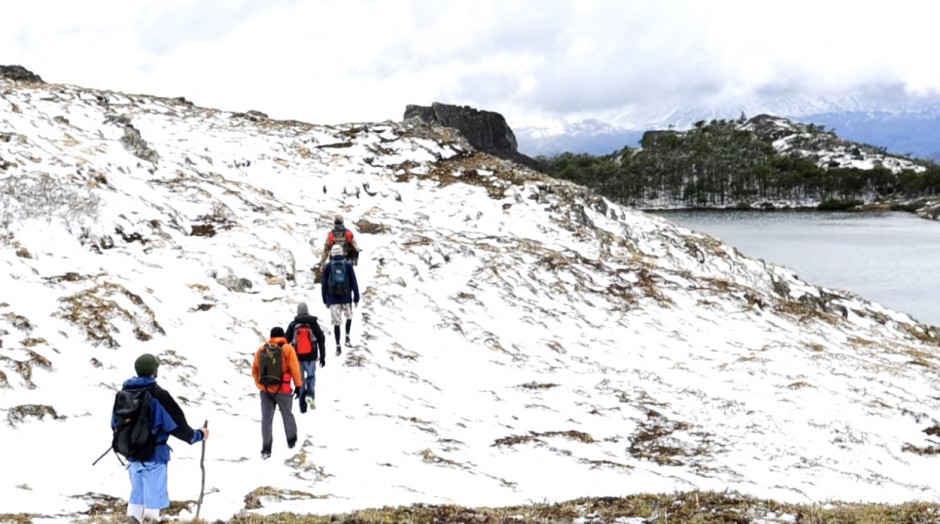 The Lagos Altos trail is a 24 km loop traversing multiple habitats, from Patagonian steppe with grasslands and wetlands, up through temperate beech forests, to high peaks. A common saying in Patagonia is "you experience all four seasons in the same day." This was true the day of the hike. Even though it was early summer, conditions were cool, humid, and springlike in the valley, changing to snow at elevation. Brief sunbreaks with strong dry wind remind you it's actually a semi-arid region. I was underprepared gearwise. Always bring snowpants to Patagonia, regardless of the season. 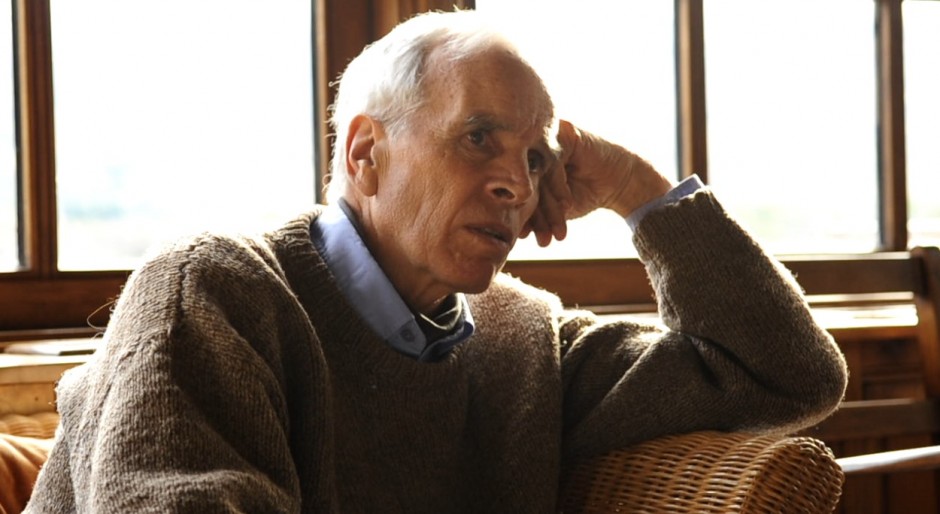 Doug Tompkins, founder of The North Face, and co-founder of ESPRIT clothing company. Tompkins left the business world in 1989 and a year later created the Foundation for Deep Ecology. He has since dedicated his life to stopping the extinction crisis and to ecological restoration via the creation of national parks. When we asked about what led him to conservation, he said, "It's one of those things where you look back in your life: you took a turn in one direction, and it took off from there. I could've gone in a hundred directions, but I got involved with the nature tradition, climbers, I was gonig to wild places. . ." 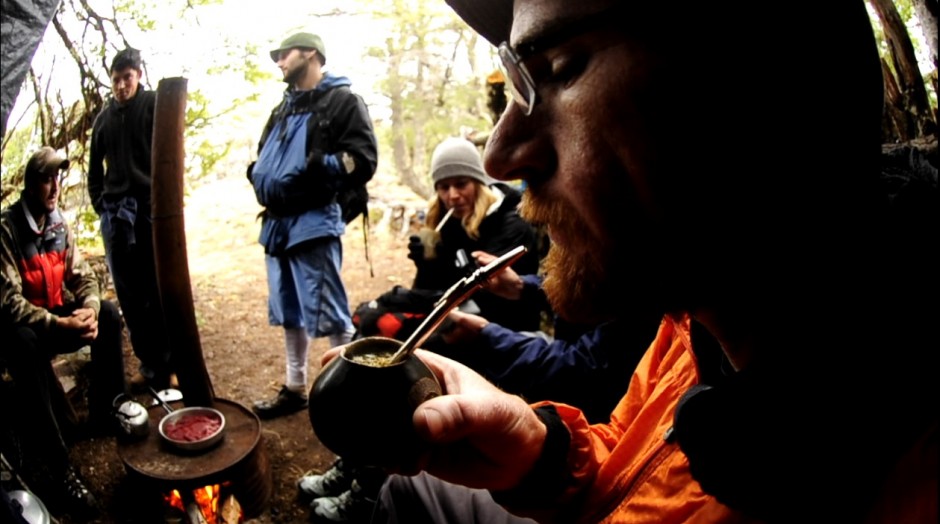 Adam French sips mate while we warm up / cook on a stove in the senderistas' (trail-builders) camp. 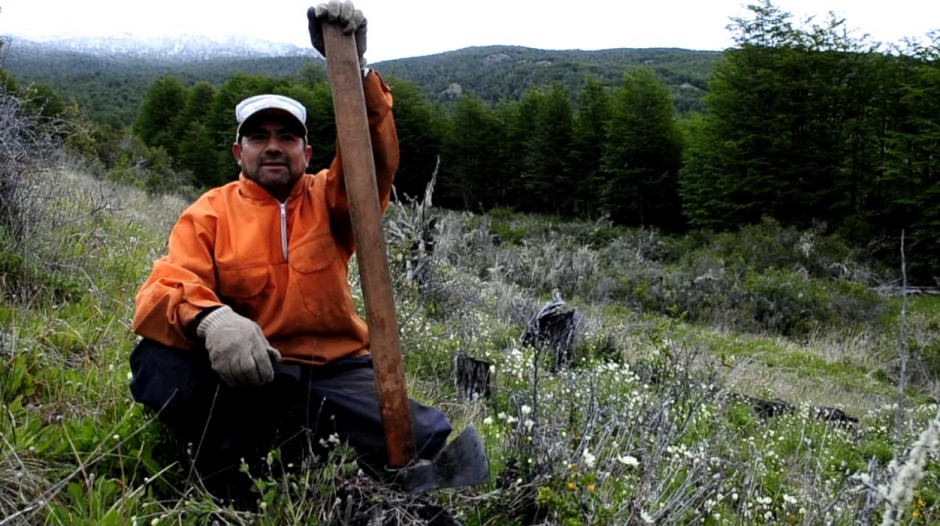 Noberto, a former ranch hand from Cochrane, works 12 days on, three days off at the park. His camp is an hour-and-a-half hike up from park headquarters. As a young man he had actually worked here as a ranch-hand when it was the Estancia Valle Chacabuco. On this day, his work was getting rid of old stumps - vestiges from days when forests were burned to make pasturelands. 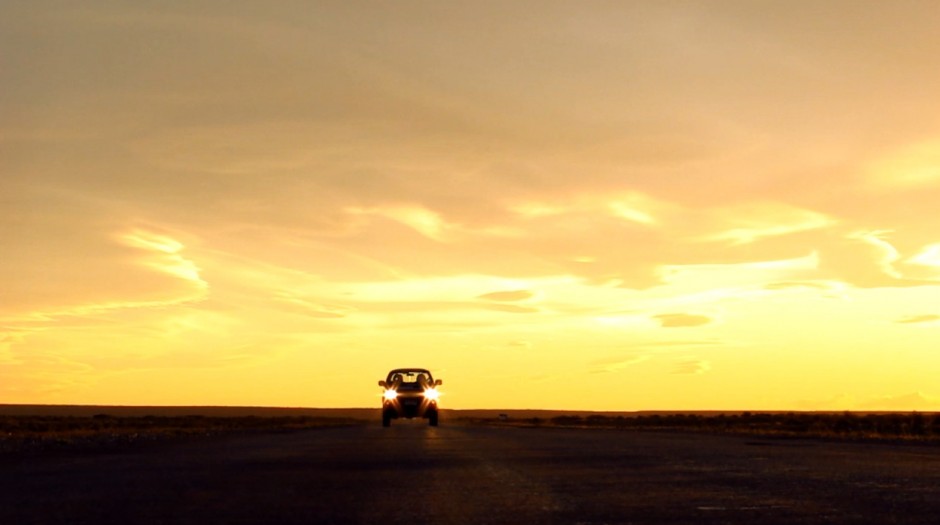 Here is the big push home up Ruta 40, Santa Cruz, Argentina. Valle Chacabuco has its own pass through the Andes called Paso Roballos. It's one of the most beautiful and isolated mountain passes I've ever taken. As soon as you cross into Argentina, the land opens into vast prairies, the classic dry pampas of Patagonia. Several stretches of the Ruta 40 through Santa Cruz province are still unpaved. As the sun was setting, Claudio set up his mini tripod right in the middle of the road.

The author (R) and fellow journalist Adam French overlooking the confluence of the Rio Baker and Rio Nef. This and all images by Claudio Vicuña.