The River Effra is one of London’s great lost waterways. Rising near Crystal Palace, its course flows through Norwood, Dulwich, Herne Hill, Brixton, and Kennington, before finally emptying into the Thames beside Vauxhall Bridge. Since Victorian times this ancient river has been lost from sight, however, flowing through subterranean passages and drains deep beneath the city streets.

I took a trip down to London Below in order to walk the course of this long-forgotten Thames tributary.

The Effra is referred to frequently in historical texts. In Thames: Sacred River, Peter Ackroyd writes that the Effra took its name from the Celtic word yfrid, meaning “torrent.” One myth tells that Queen Elizabeth I sailed the Effra in her royal barge, to visit Sir Walter Raleigh at his Brixton home.

By the late 17th century, though, the Effra (like most of London’s waterways) had begun to deteriorate into an open sewer.

In the mid-19th century, the famed civil engineer Sir Joseph Bazalgette redirected some segments of the Effra to form the Southern High Level Sewer, also known as the Effra Sewer, as well as the Southern Low Level Sewer, which in turn feeds into the Southern Outfall Sewer. One of the more notable stretches lies beneath Effra Road in Brixton, supposedly accessible through the crypts of St. Luke’s Church at West Norwood.

A local legend from Victorian times describes a coffin which appeared floating down the Effra. The corresponding grave at West Norwood Cemetery was found to be untouched, however, and so it was concluded that the casket had subsided into a section of the subterranean river below.

Loitering on a street corner until a gap appeared in the flow of disinterested passers-by, we made a decisive dash toward the drain cover.

My guide on this voyage into the dank bowels of London was local explorer Keïteï. She was no stranger to the subterranean network of drains and sewers that fan out beneath the streets of the capital, and was keen to revisit the Effra, so often overlooked in favour of its larger lost cousin, the River Fleet.

We met near Clapham, following a series of residential streets until we reached our entry point: an unexceptional manhole cover set into a stretch of suburban pavement. It was daylight still, and a steady stream of commuters were drifting past us from the tube. We would have to time it perfectly.

We opted for a policy of speed rather than subterfuge; all being well, we decided that it should take us no longer than 20 seconds to lift the lid, reach the ladder inside, and close the drain behind us. Anyone who spotted us — be they public, police, or the council authorities we had briefly considered impersonating — would have to act fast if they were going to stop us. Once inside, it seemed unlikely anyone in their right mind would follow us down.

Loitering on a street corner until a gap appeared in the flow of disinterested passers-by, we made a decisive dash toward the drain cover, lifting it without difficultly, and, alive with adrenaline, I followed Keïteï down the rusted ladder and into the stale darkness below. 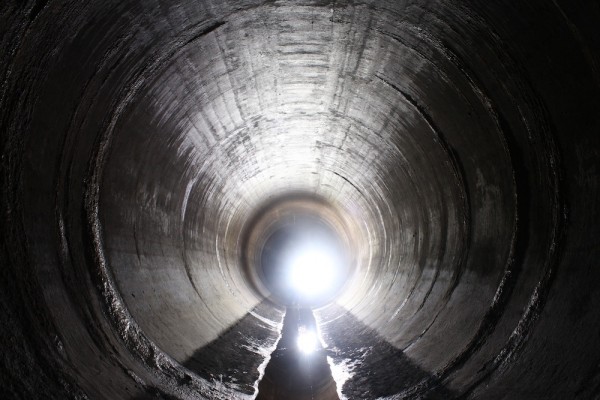 The first access ladder was relatively short, but just a few feet away from its base the real descent began — a long shaft falling away to the river itself, the ladder disappearing into darkness.

On finally reaching the banks of the Effra, the word ‘river’ seemed like something of a misnomer. Instead, we found a trail of black slime smeared along the belly of a grey concrete tube. Several rats looked up in surprise at our arrival — their dull, beady eyes throwing back the torchlight — before turning tail to disappear into the hidden depths.

The tunnel angled downwards as it flowed past us, right to left, in the direction of the Thames. Here the murky liquid grew deeper, black with corruption and as still as a corpse. A loud belch echoed about us from somewhere downstream — the “Gurgle Pit,” as some explorers know it.

We turned right, away from the miasma, and waded upstream. The still water was thick with sediment, a black sludge flecked with traces of white and grey which looked suspiciously like fat deposits. Strange tufts of mould would occasionally drift past our feet, sprouting from tiny rafts of unnamable, buoyant matter.

At regular intervals, chains had been hung across the waterway to catch floating debris. Now these were thick with rags, snatches of clothing, hair and ribbons, which had built up over the years. I found a beaded necklace suspended from one of the furry chains, twisted into a rope of discoloured fabric.

In Victorian London, there were people who made a living collecting such trinkets. These brave souls would sail along London’s hidden rivers on punts or barges, fishing for scrap metal or jewelry that had accidentally made its way into the city’s drains.

We lit candles, the simple ritual exciting a ruddy glow from the surrounding walls.

From time to time, red brick passages led off to either side. Many were fitted with ladders back to the surface, to emerge through unmarked drain lids trodden each day by countless unsuspecting pedestrians. In one alcove a rule had been placed to measure depth — an indication that the Effra was not always so feeble as it now appeared, at the height of a rare English drought. Another siding led to a vast sluice gate, designed to control the flow of other drains joining the subterranean river.

Soon our surroundings changed. Reaching a junction between streams, the grey tunnel gave way to elaborate brickwork. Vaulted red passages formed an ornate intersection, the carefully laid bricks throwing back our torchlight in shades of red and orange, accentuated with subtler blue-green hues. Some urban explorers refer to Effra as the “Rubix Drain” — most likely a comparison between the multichromatic brickwork of the Southern Outfall Sewer and a Rubik’s Cube.

It was strange to observe just how much thought the Victorians had put into the design of their subterranean canals — spaces never intended for human traffic — and yet it seemed a fine example of the mentality of the day: function never without care for form, grand gestures made simply because they could.

We lit candles, the simple ritual exciting a ruddy glow from the surrounding walls. Just then a drain further upstream must have flooded a gate, and a new lease of life bubbled through the tunnels ahead. Here was the torrent at last, a playful stream rising fast around our boots. Writing about the sacred forces of the Effra, Ackroyd claims, “its powers have departed.” Although the river’s strength may be diminished, the vaulted red tomb Bazalgette built for her — itself a wonder of civil engineering — holds a tangible power all its own.

After several hours exploring the drain, we emerged through the same hatch. Coming out is sometimes riskier than going in — you never know who’s going to be about. On this occasion the street was empty, however, as we rolled from the top of the ladder onto the pavement, leaving trails of clay-like muck spread across the tarmac. On the far side of the street, now dimmed by twilight, a lone cyclist stood playing with his helmet — awkwardly adjusting straps, checking his tyres, inspecting his phone — anything but acknowledge the two strange figures that had just crawled giggling out of a sewer.

I threw him a cheery smile as we vanished into the night.

This post was originally published at The Bohemian Blog and is reprinted here with permission.

Tagged
Hiking London, England
What did you think of this story?
Meh
Good
Awesome