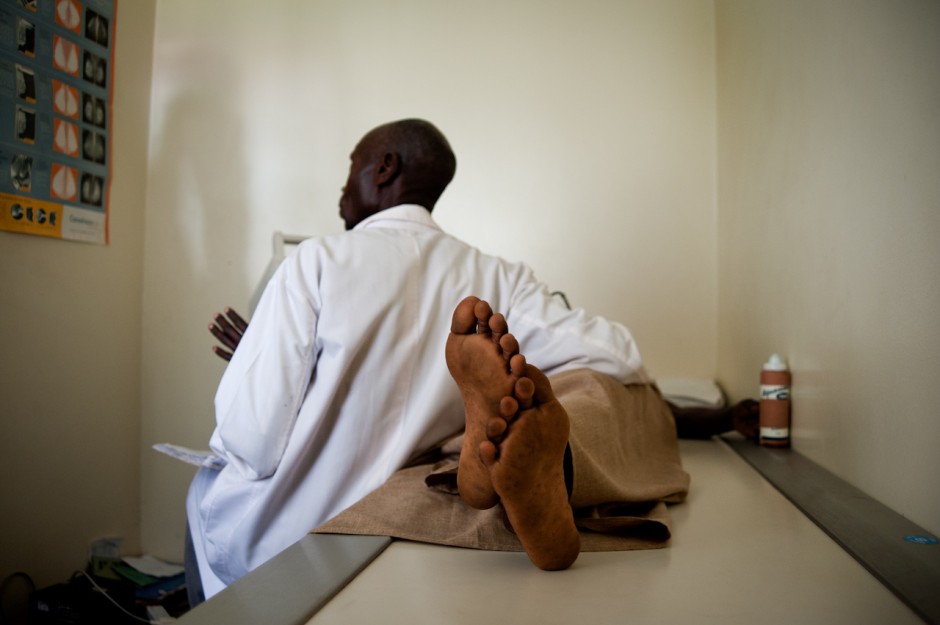 A doctor gestures to his students during a demonstration of a sonogram technique used to determine causes of infertility. Shot in Arua Hospital, in the Senke Ward--named after the brand of motorbike that causes the bulk of the injuries seen inside. 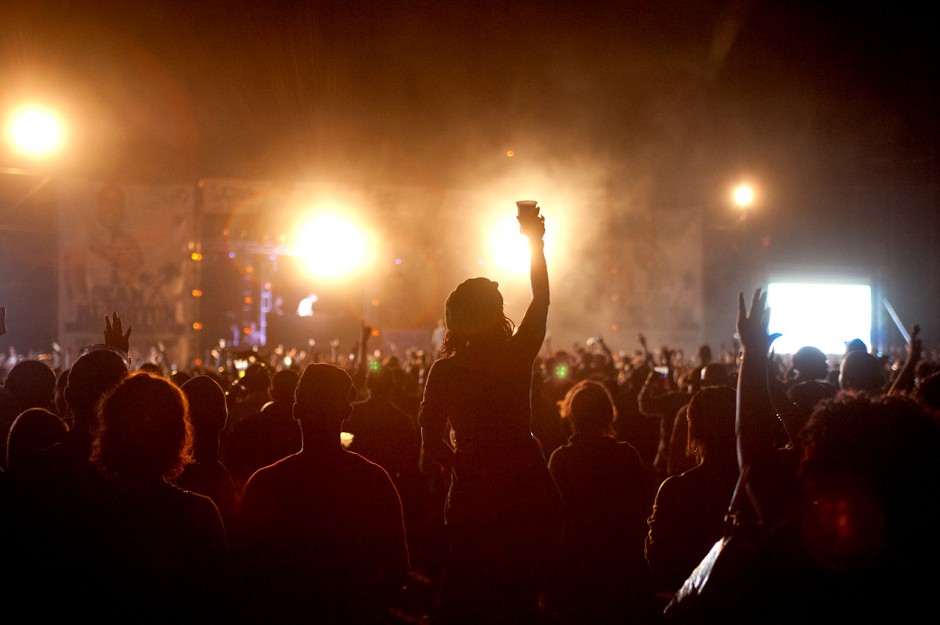 A fan raises her beer during the Sean Kingston concert in Kampala during September 2011. Kampala has attracted an increasing number of large music events and they're generally pretty good, although the R. Kelly event last year is universally agreed to have been a rip-off. Photo by Will Boase for Kampala Dispatch. 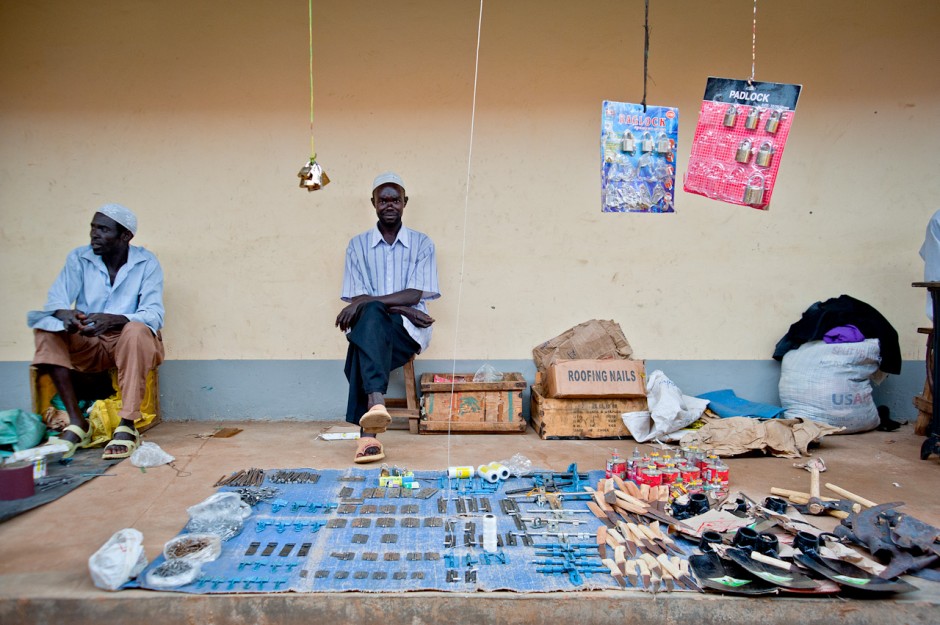 Men selling assorted items of hardware at a market in Yumbe, one of Uganda's most rural and isolated districts. It sits just across the border from South Sudan, and many of the locals own trumpets used to scare off elephants that travel over from South Sudan to eat the crops. Photo by Will Boase for USAID/NUTI. 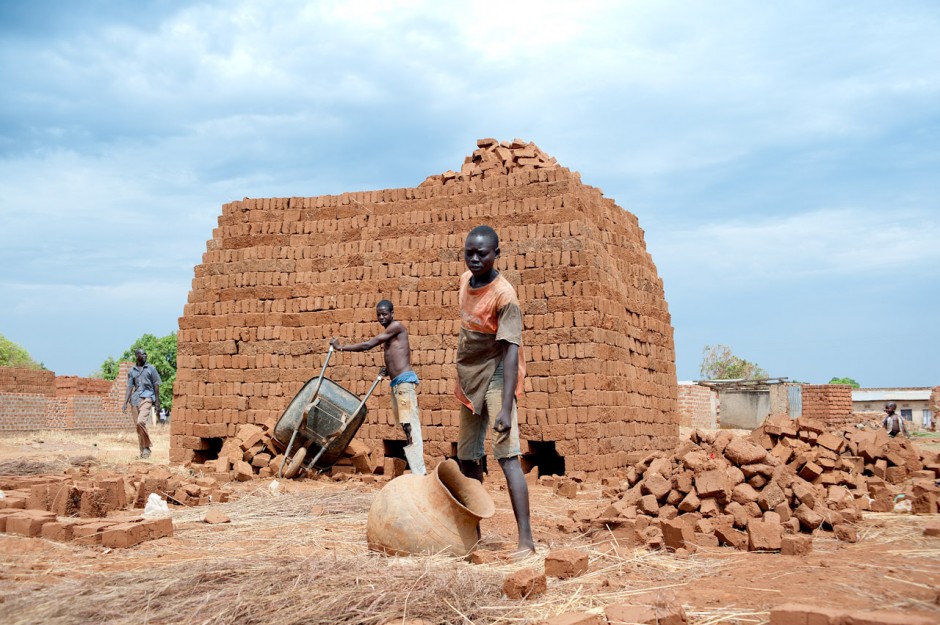 Men working on a brick stack in Kitgum town. The bricks are formed from a clay mix, dried in the sun and then stacked like this. Then a fire is lit below the stack (that's what the holes at the bottom are for) and after a week the bricks are ready. Kitgum was at the centre of the LRA war for two decades, so the sight of brick ovens is a very positive sign of the town's recovery. Photo by Will Boase for USAID/NUTI. 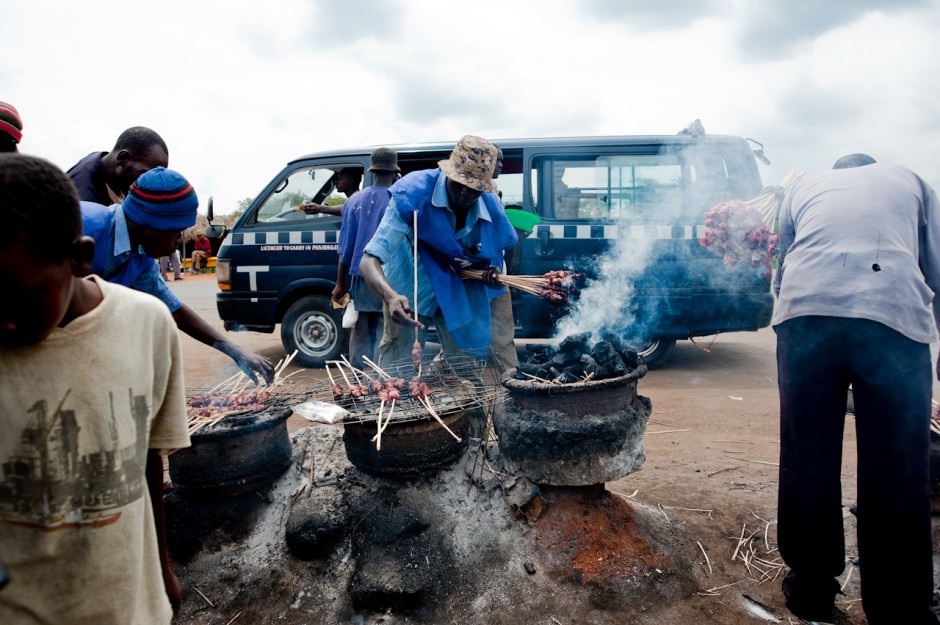 Sellers of roasted meat preparing their wares beside the road at Kafu, a junction which sits on the edge of Nakasongola and Masindi Districts. Cars on their way up north always stop at this little spot to buy gonja (roasted sweet bananas) and dubious quality meat. Kafu is also the turn-off for cars heading to Murchison Falls National Park, one of the most popular tourism destinations in Uganda, so be warned- the meat hawkers are tired of being photographed by passing tourists so they will stick greasy hands over your lens if you're not subtle (or do like me and ask for permission). Photo by Will Boase for USAID/NUTI. 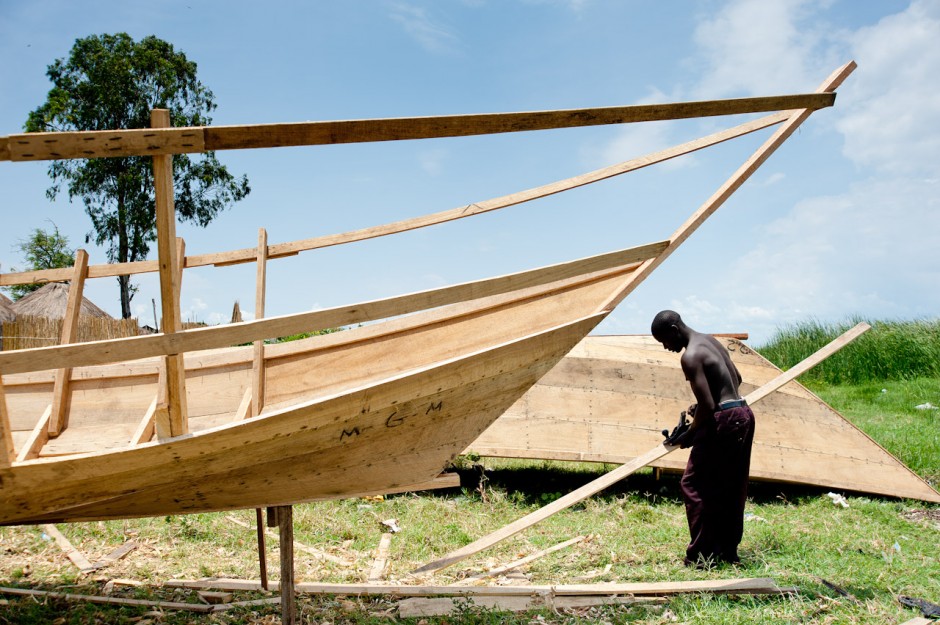 A boat-builder on the shore of Lake Albert at Panyimur, a stone's throw from the Congolese border. For $500 you can have a boat this big, but Lake Albert's climate leaves it susceptible to sudden storms, which cause regular boat accidents, so drive carefully and wear a lifejacket. And don't accidentally stray into Congolese waters. Photo by Will Boase for USAID/NUTI. 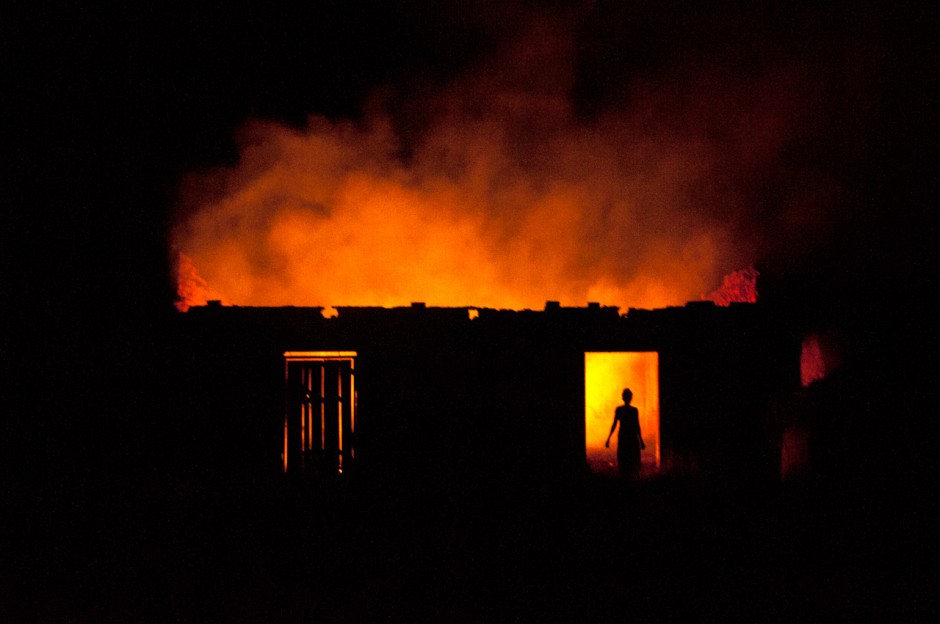 If you were thinking "warzone" or "tragedy," think again. What do you get when you mix children, dried grass, matches and an abandoned house? This girl has left her friends to enjoy the warmth as she escapes the smoke caused by a good game of setting fire to dried grass. Seen in Amuru town during the presidential elections in February 2011. Photo by Will Boase for Norbertmao.org. 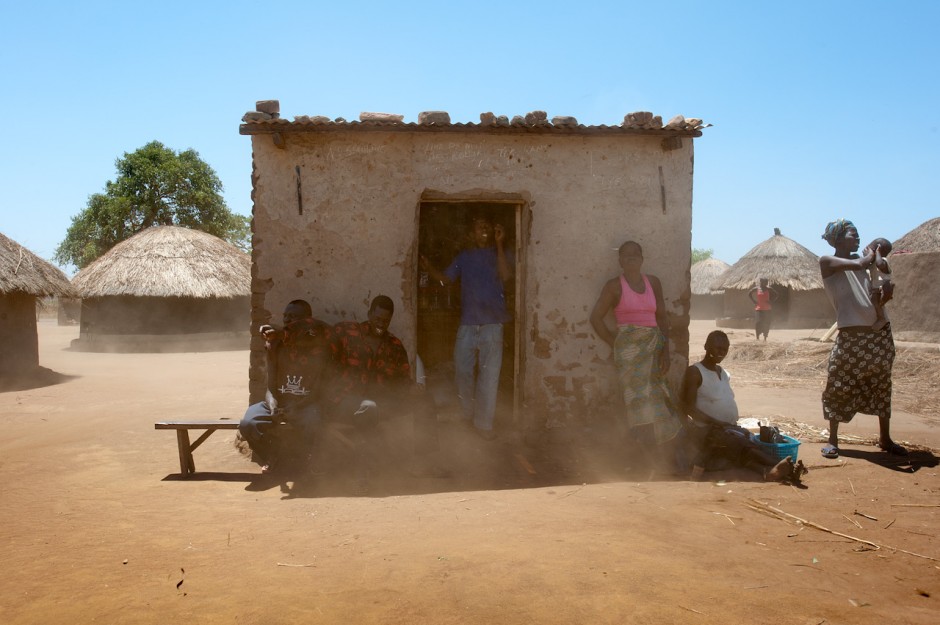 A group of villagers in Nwoya district squint their eyes as a gust of wind blows dust into their shady seating outside the local shop. The contrast between wet and dry seasons in the north is more pronounced, and the dry season kicks up amazing clouds of dust. Photo by Will Boase for USAID/NUTI. 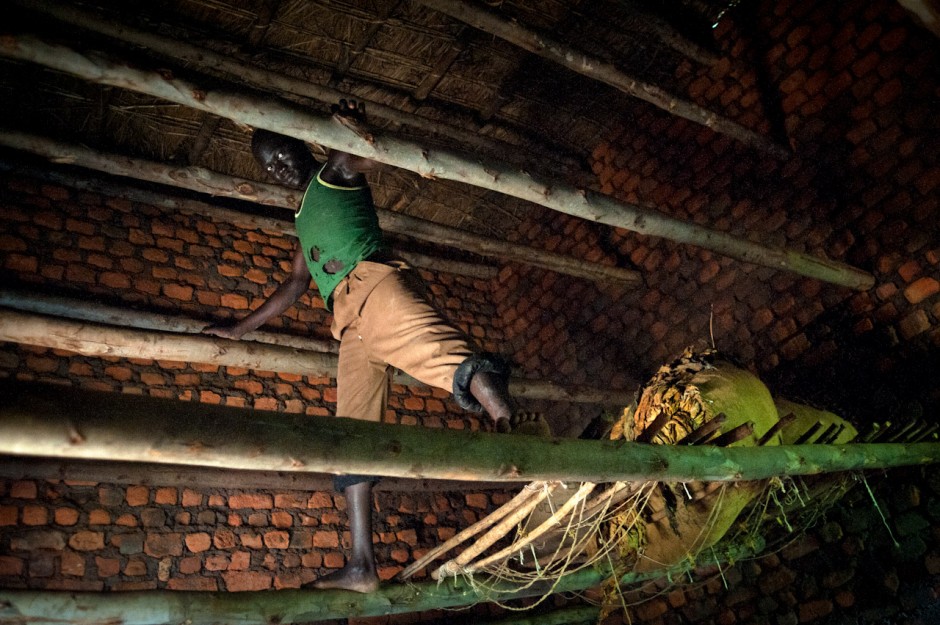 Inside a tobacco drying barn in Arua District. Tobacco is big business in Uganda, and the process of drying and curing the leaves needs a building like this one. The leaves are hung from the rafters, and then the temperature must be controlled exactly for around 10 days, during which time the chemical makeup of the various compounds within begins to change, which in turn makes for tastier smoke. Throughout the curing process the farmer will sleep beside his barn, paying constant attention. Photo by Will Boase for USAID/NUTI. 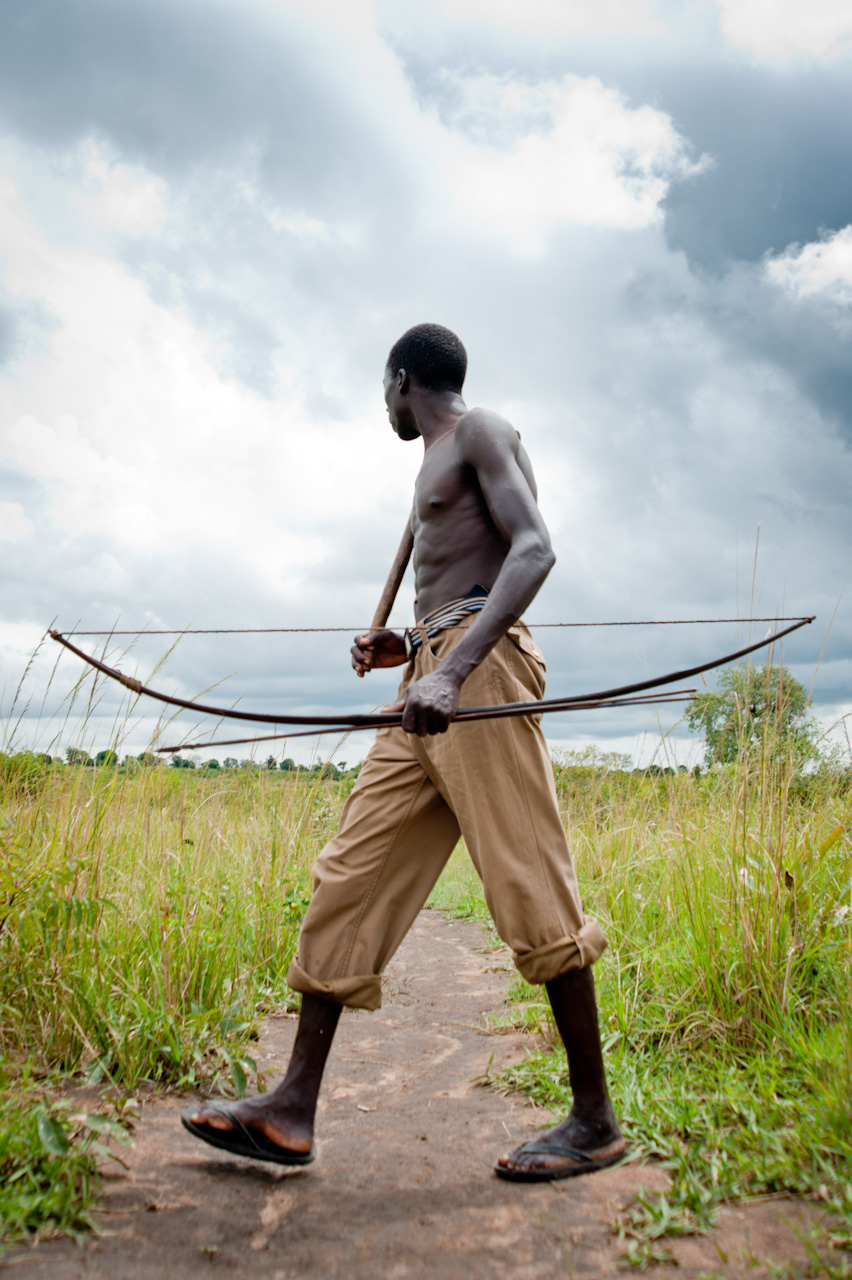 Patrick Otti, from Lubene Village, Kitgum District, strides over a footpath while hunting rabbits in the bush near his home. During the war anybody caught in the bush with weapons would be killed (either by the rebels or the Ugandan forces, neither of which liked finding armed people in their way) so hunting was abandoned, but with the end of the fighting it's becoming popular once again. From what I could see traditional hunting involves fire, bows and arrows, dogs, axes, and alcohol, along with a lot of running. Not much gets killed, but everybody has fun. Photo by Will Boase for USAID/NUTI. 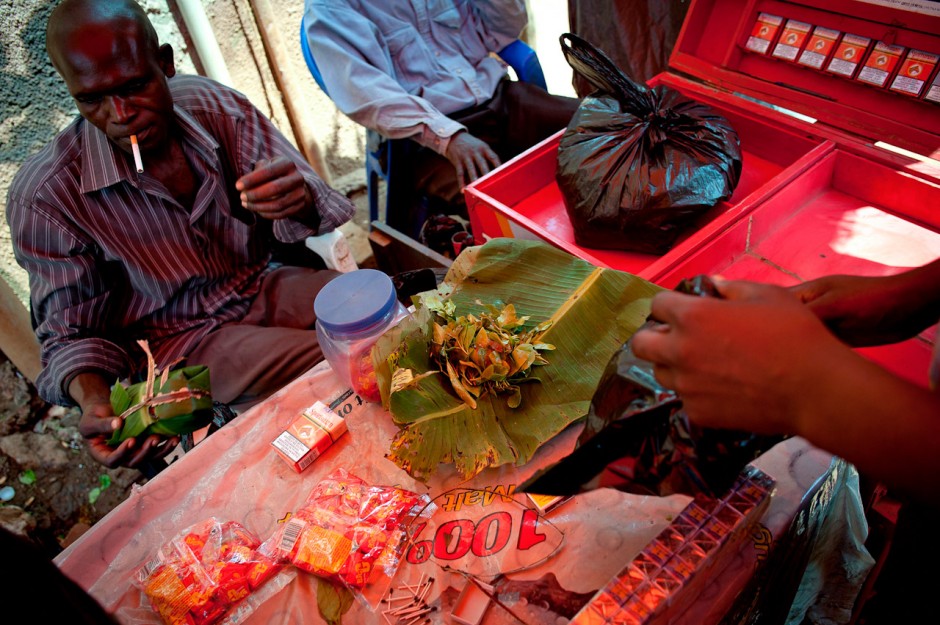 A customer buys khat leaves (locally known as miraa) from a seller in Jinja town. The leaves, chewed with bubblegum, are a mild amphetamine and are popular with truck drivers and young men. The leaves produce a rush and make the chewer more talkative and enthusiastic, but chewing destroys your teeth. You can always bet the alleyway where the miraa is sold will be one of the liveliest and funniest places in any given town, but don't take cigarettes with you, or you'll get them all pinched. 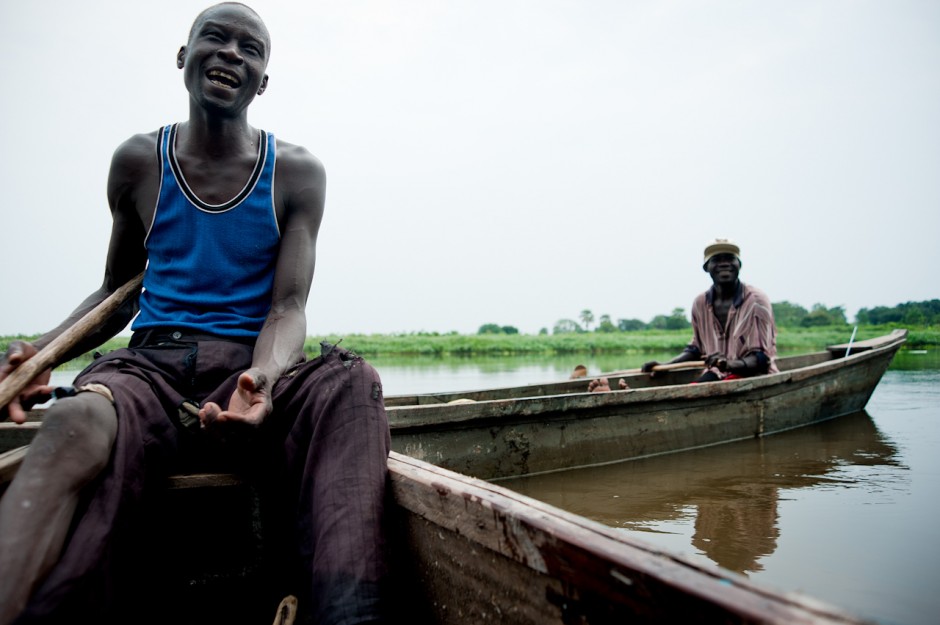 Rhino Camp was named for the abundance of rhino, but they were wiped out over time and now just the name remains. However, there is now a rhino ranch in Masindi, and there are rumored to be plans to begin reintroducing the beasts to several of the national parks. Photo by Will Boase for USAID/NUTI. 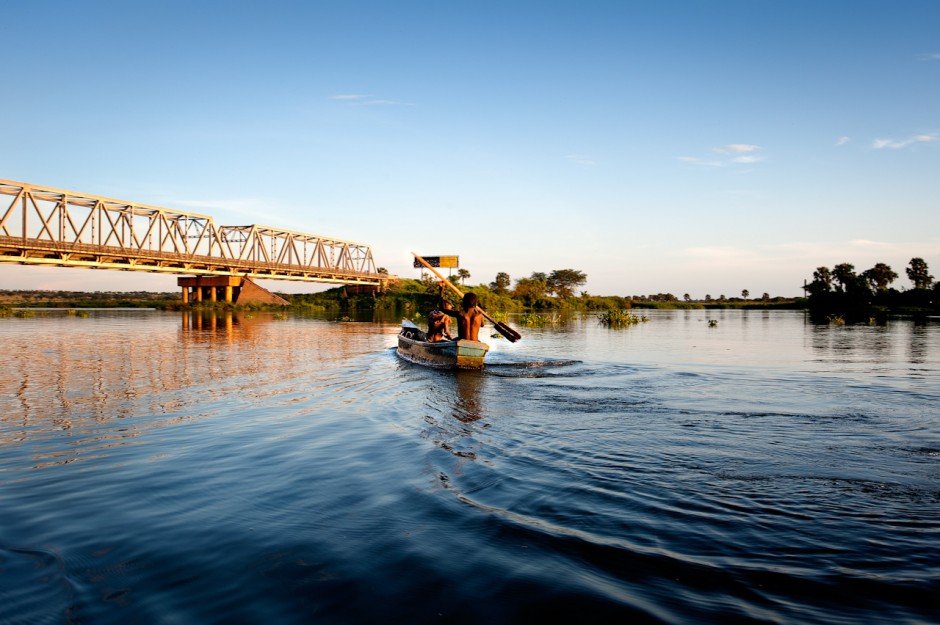 Children paddle a canoe on the Nile below the railway bridge at Pakwach. Though Pakwach itself is not a very appealing destination, the riverside is a highlight because on the other bank is Murchison Falls National Park, and every evening the elephants come out of the park to wallow and drink in the muddy swamps lining the river. For 2,000 USH (60 cents) a fisherman took me out into the fast-moving river, and then demonstrated how to paddle upstream to get home. Unsurprisingly, the secret is to paddle fast and hard. 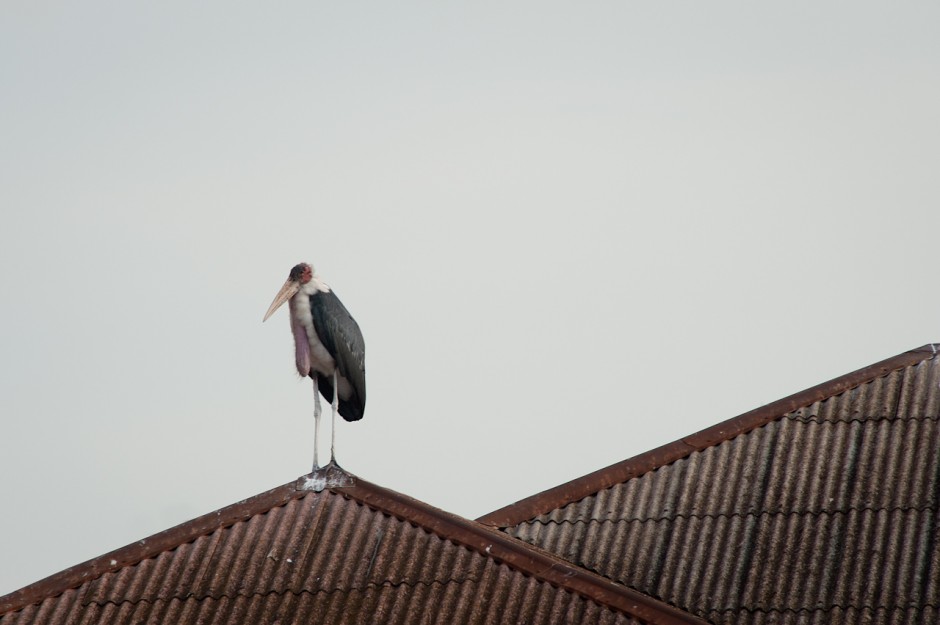 These big, funereal birds are the size of a 10 year-old child and people often describe them as the official mourners of a burial ceremony. They have stomachs that digest absolutely anything. They're usually found pulling apart the rubbish heaps to sustain their diet of plastic bags and goat bones. There is a popular belief that where a marabou is left to rot, grass will never grow again, owing to the toxicity of their flesh. 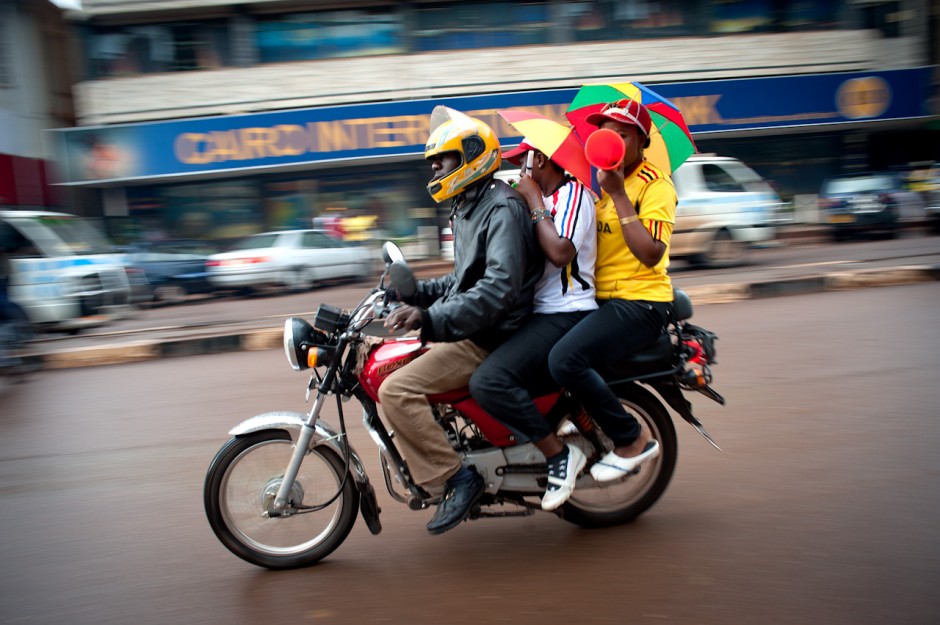 Football fans riding on a boda-boda (motorcycle taxi) on their way to the Uganda vs Kenya match at Namboole Stadium, Kampala, in October. This image shows that rumors of the demise of the umbrella hat have been exaggerated. Photo by Will Boase for MGS Video. 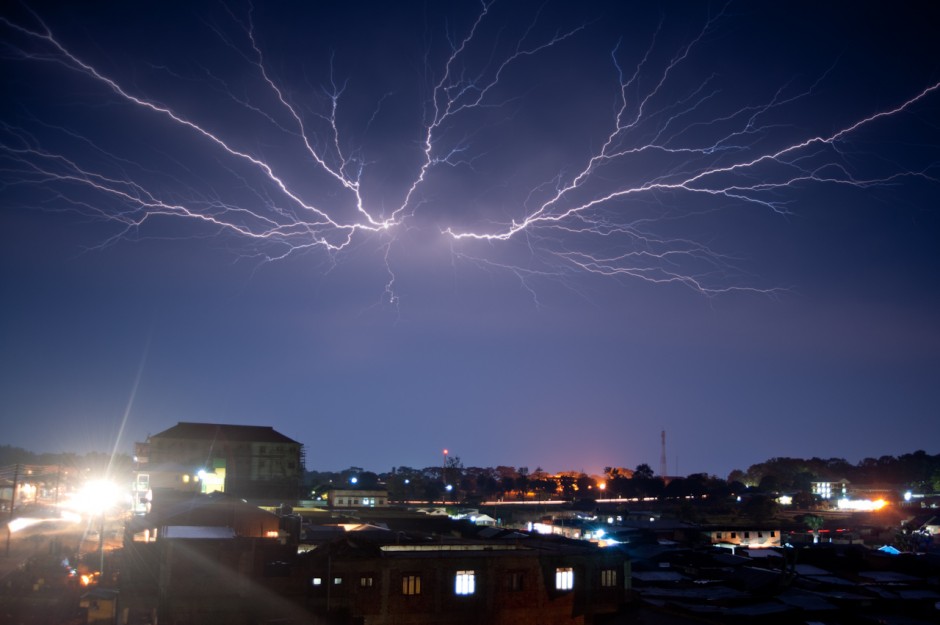 Lightning spreads over Gulu town during a thunderstorm. The storms are spectacular in a way that growing up in Britain never prepared me for--the thunder shakes the buildings, and the lightning covers the sky. 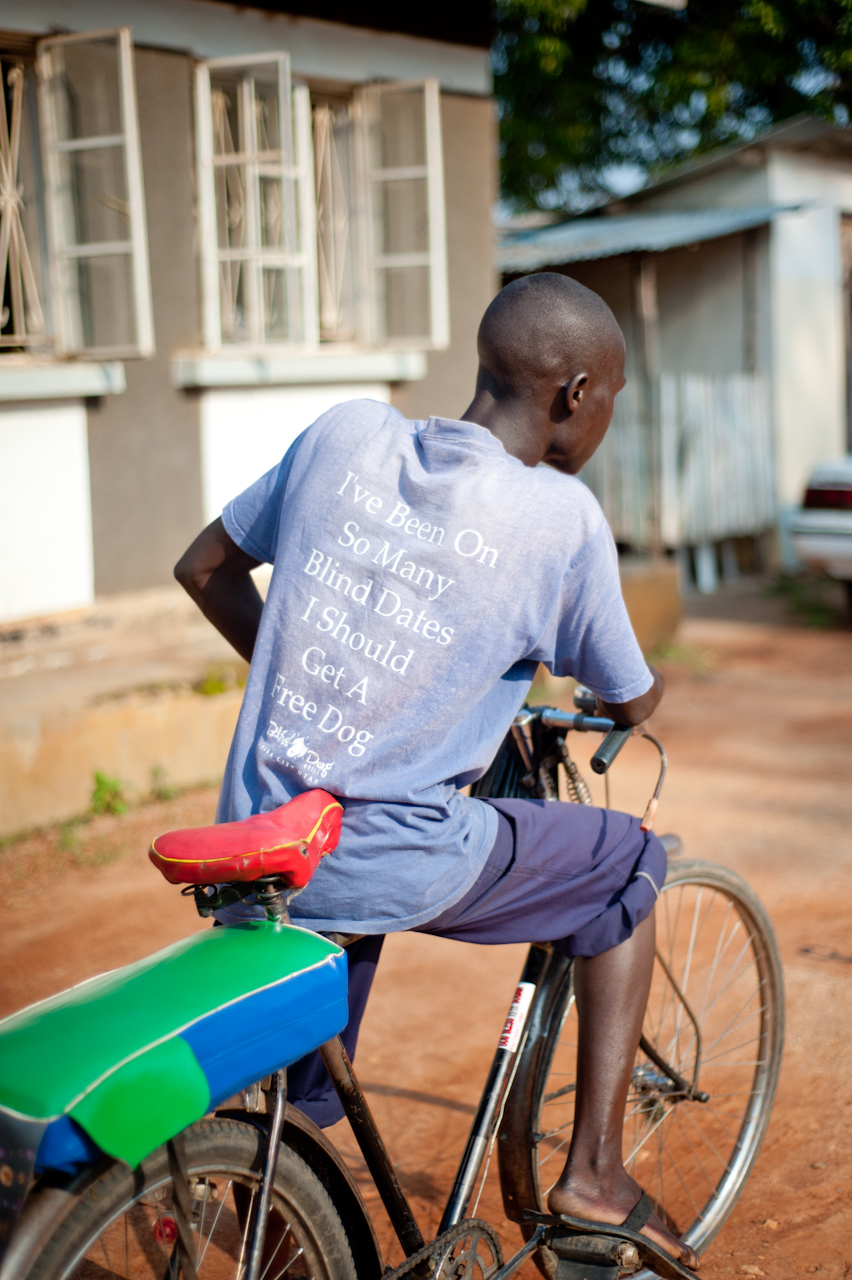 A bicycle-taxi driver wearing a great t-shirt in Arua. Photo by Will Boase for USAID/NUTI. 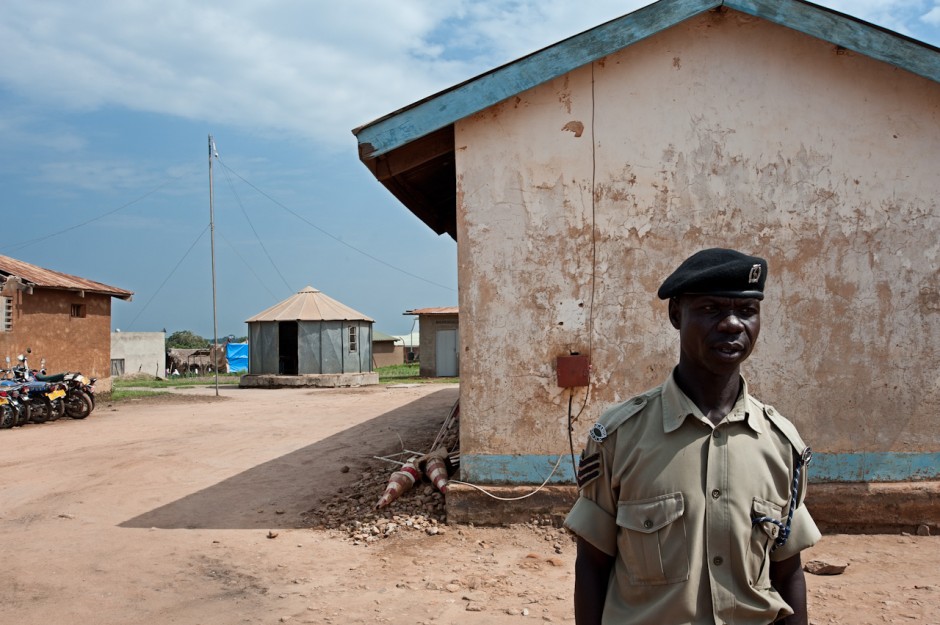 A policeman in Koboko, West Nile, looking very stern. He was actually very pleasant, courteous and polite, but he had a good face for a policeman nonetheless. Photo by Will Boase for USAID/NUTI. 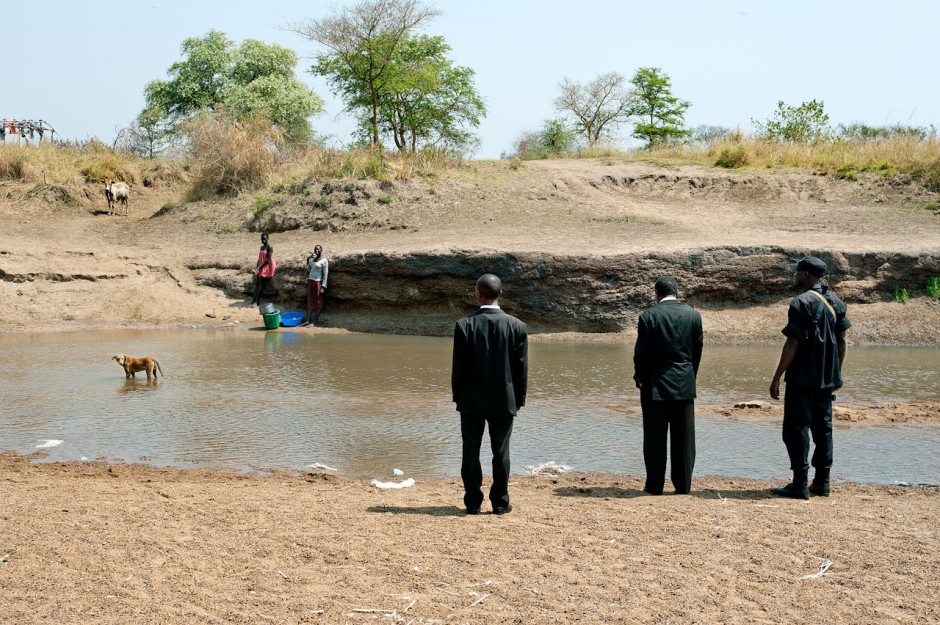 Norbert Mao and two members of his security detail contemplate an unexpected river blocking the road. The trouble with a wrong turn in the rural north of the country is that it can take you 50km out of your way before you realise you’re on the wrong track. Mao was running for president in February 2011, and what his campaign lacked in organisation it made up for in enthusiasm. He didn't win. Photo by Will Boase for Norbertmao.org. 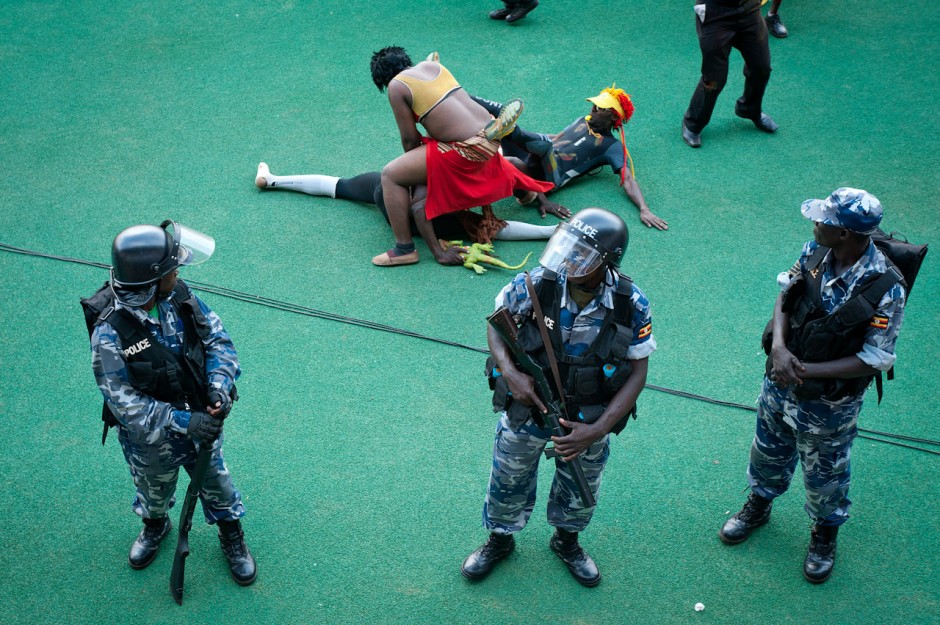 Football supporters engage in what I can only describe as "antics" in front of the VIP stand at Namboole Stadium in Kampala in the run-up to the hotly anticipated Uganda-Kenya match. The best thing about this scene was that the riot police were utterly lost. They could see nothing bad was going on, but they were also aware that the vice-president of Kenya was watching. In the end they gently shooed the fans away. For a bonus point, can you spot the rubber lizard? Photo by Will Boase for MGS Video.

Tagged
Uganda
What did you think of this story?
Meh
Good
Awesome

Dispatch From Murchison Falls: Guiding One of the Most Intense Rivers in the World