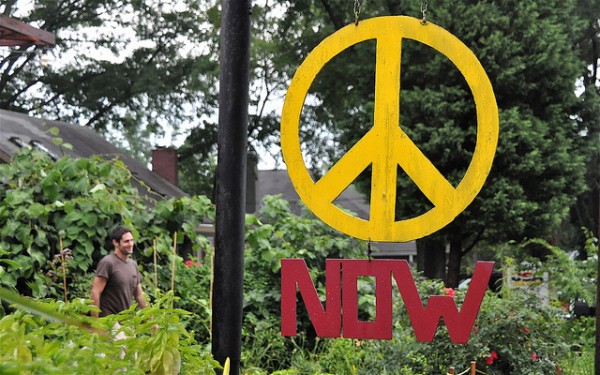 1. SOMEWHERE AROUND MACON the sweetgums appear. Pines change from slash and long-leaf to lob lolly. Then tulip trees, oaks. The rolling farmland that started around Valdosta keeps getting steeper. Getting into the Piedmont now. The forests of my childhood. Red dirt gulleys you could follow. Trails. My earliest travels, following creeks back through the Chattahoochee watershed.

2. Checking into the La Quinta Inn off Haynes Bridge road. All black receptionists. I’d said something to Lau about Florida not being the South. That it didn’t start until Valdosta. My accent skewing more southern than it is. Feeling like I was caring about all of this, “presenting” it in some nostalgic way that the kid I was maybe 15 years earlier would’ve made fun of.

3. Dinner at Greenwoods. Roswell, Georgia. Site of some 50 post-camp / soccer game meals. Glasses of sweet tea, buttered cornbread, fried green tomatoes. The back dining room, this antebellum structure, all timber frame logs and dovetail joinery from a different time. Plates of collards, mashed potatoes and gravy, plum-barbecue chicken, shrimp and grits. Blackberry pie for dessert. Faces of people I thought I knew–from camp, from school?–but I was mistaken.

4. Late afternoon on a 90+ day. The Chattahoochee river park, marshland sections above Bull Sluice lake. Picnic areas shaded by red maples. Still the heat and humidiy steaming up from the ground. Layla chasing Canada geese, mallards. Crazy frogsound and cicadas. “Let’s go to the forest nena. [A flash of red.] See that cardinal? Ok, let’s go in here. See it’s different here than Bolsón, you have to always watch your feet. See this plant? Poison ivy. See how the leaflets are? See that red dot in the center? If you touch this plant it makes you all itchy. But then this plant here, see? It’s called Jewelweed. Look at how the water beads up on it. See the jewels? Si, es lindo. This plant is friendly. You want to look down in there? Ok? But you gotta watch where you step. That’s it. That’s the river there.”

Then later going back. Forgetting how hot it could get. That at some points the cicadas and the insect noise and the heat all seem to swell together. And that if you’re out in it long enough, and stay out in it, you can feel this point some time during the evening where it finally breaks. Sometimes it happens just as the sun is setting. This pause in the animal and insect noise, or at least a quieting. This feeling that you’ve made it through the heat that day. Then the frogs and cicadas all starting back up again only it sounds slightly different now. “See nena. Look into the forest. LOOK! Those are called lightning bugs. Viste? See that one?” 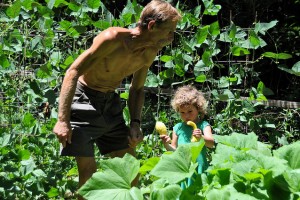 Chuck searching for more ripe squash in the garden with Layla.

If you could follow each visual cue that comprises your perception of a place. Porches and water oaks. A house you’d rented on North Ave, now with a For Sale sign. Backyard gardens. WUOG on the radio. The downtown empty; UGA students gone for the summer. The arches and the quadrangle beyond. Almost too hot to be out midday.

If you could follow the way memory attaches itself to place. The Athens Montessori School. Your old teaching partner Melody waiting there for you. Offering water. Saying “you know it’s good water,” an old joke. Saying she’s dreamed about this moment for a long time. Later at their property out in Madison county where you’d lived that last year in Georgia. A single room cabin with woodstove and outhouse. Chopping firewood to rocksteady, hip hop. The cabin since burnt down. Walking around with Melody’s husband Chuck, a Vietnam Vet, identifying trees, Redbud, Hawthorne, and the outline of where the cabin once was, all of it gone back to forest now. You’d talked to him about traveling once – 10 years or so ago – before you’d left Athens for your first journey. You’d mentioned the word “backpacking.” He said “the only backpacking I’ve done was in Vietnam.” Another time he’d said “After I came back home I realized you could just lie down and sleep anywhere.”

If you could follow the way place holds memory. Sunday mornings hungover, loading up your boats and gear and heading up to the Chattooga. Feeling nervous when you crossed the 76 bridge. The crew all stoned and contemplative. Then being out there. The realm. The eddies and drops and holes and flow. Driving home recalling particular moves or beatdowns. WUOG like a soundtrack pulling you back to Athens and your girlfriend’s hose, or out to the cabin where it’s really quiet. Or just waking up one morning , deciding to keep it close by, driving 5 minutes down to rooster tail, the takeout on the Broad river. Seeing someone from the crew there, Tim.

At the time you don’t realize how the place will laminate into everything. 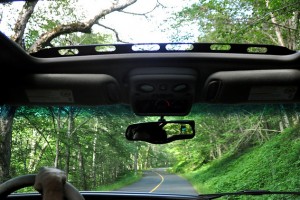 Driving back from Asheville with both Micael and Layla asleep for once. Lau up front with me:

“Tim was D-rock’s best friend, you know? I remember seeing them after the funeral it was just like. . . the look in their eyes. D. You know he had hard times. And for me it was just like everything was changing. Everything back in Atlanta and Athens. . .High Meadows was changing. Marietta was changing.. .and all this seemed to flow together too with Tim dying. . .they were right there.. . you know we were supposed to be there too. . .DJ and I were going to paddle with everyone that next day, but we ended up camping with the Wildwater crew that night and didn’t make it. . but D-rock was right there. Dale was there. Glenn was there. They watched him drown. . .they threw ropes but couldn’t. . . after it was like everyone in our crew started dealing with it in crazy ways. . .half of us started skateboarding again. It was like we needed this connection back to some earlier time. That ended up being the last summer I was with Lindsay too. . . I just had to go somewhere else. I had to leave. That was the first summer I went to Latin America, to Costa Rica. That was when I started surfing. I came back and visited but it was different. Dale had gone out to Seattle. D had moved up to Asheville. Half the crew didn’t even boat anymore. And I really haven’t been back here since.” 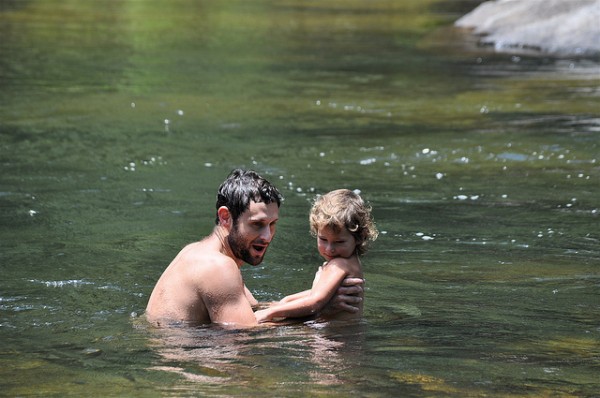 DM and Layla in the flow below Bull Sluice, Chattooga River, Georgia

This sense of none of it having changed, and that you’d only forgotten how beautiful it is. The mother, we call the Chattooga River. A place we know better than anywhere else.. The names of the drops, the lines. And now just here in the put in below Bull Sluice. The shade of some sweetgums and a small section beach, the sand all glittering with Mica. Little sprigs of sensitive plants. An older couple fishing. Low water, but still flow. Summer water. Finglerling trout. One dead crayfish that Layla keeps playing with. A Southeastern raft trip coming through, the lead guide all stoked and irie. Your wife and son and daughter’s first time in this place. The sound of the water moving downstream. Everybody getting wet. No sadness to it now, just stoke and respect. Memories and also imaginings for what could happen downstream with this new crew sometime. Knowing what’s downstream if you can make it down there again sometime. And knowing even right now the water’s flowing through those places.

Lau: “So which river was it where el chico died?

Prev Page
Tagged
Narrative
What did you think of this story?
Meh
Good
Awesome