Getting travel photos with no other people in them, especially at popular or famous landmarks, can seem almost impossible. But, if you think about it, if you try to get there when most other people don’t think to, or don’t want to go, you’re obviously going to be one of the only people there. 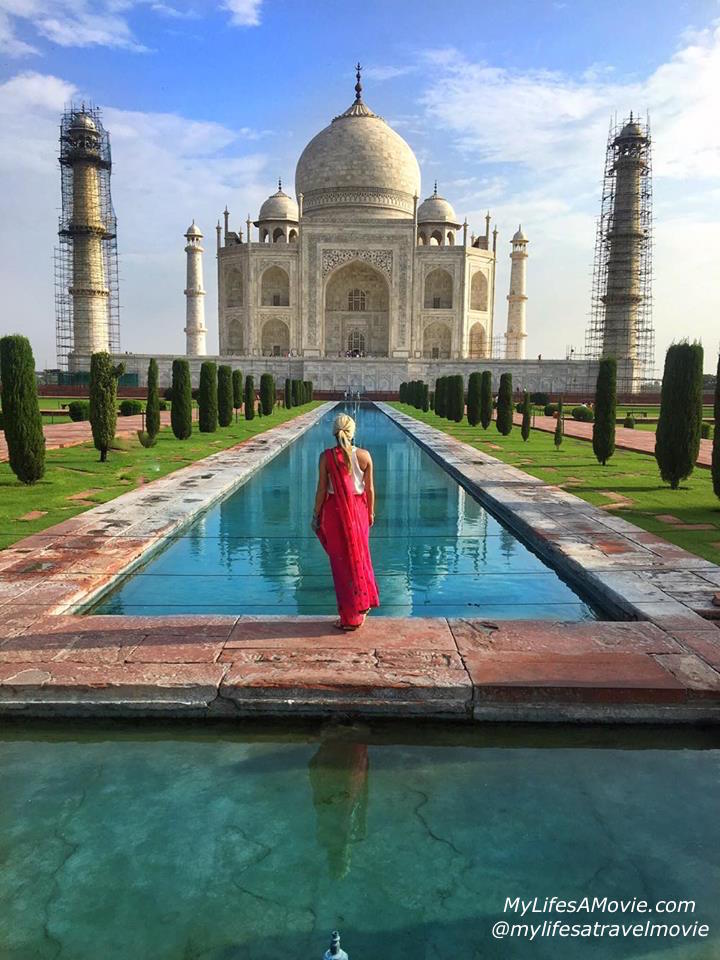 Here’s what the Taj Mahal looks like at 7am on a Tuesday during Monsoon Season!

For me, it’s easy, because I’m an overly ambitious, semi-neurotic, wanna-be photographer who will literally scale a mountain in the middle of the night just to get the perfect photo. I’ve figured out every possible factor that goes into getting those travel photos with no people in them that will make you wonder if I actually photoshopped it or not. 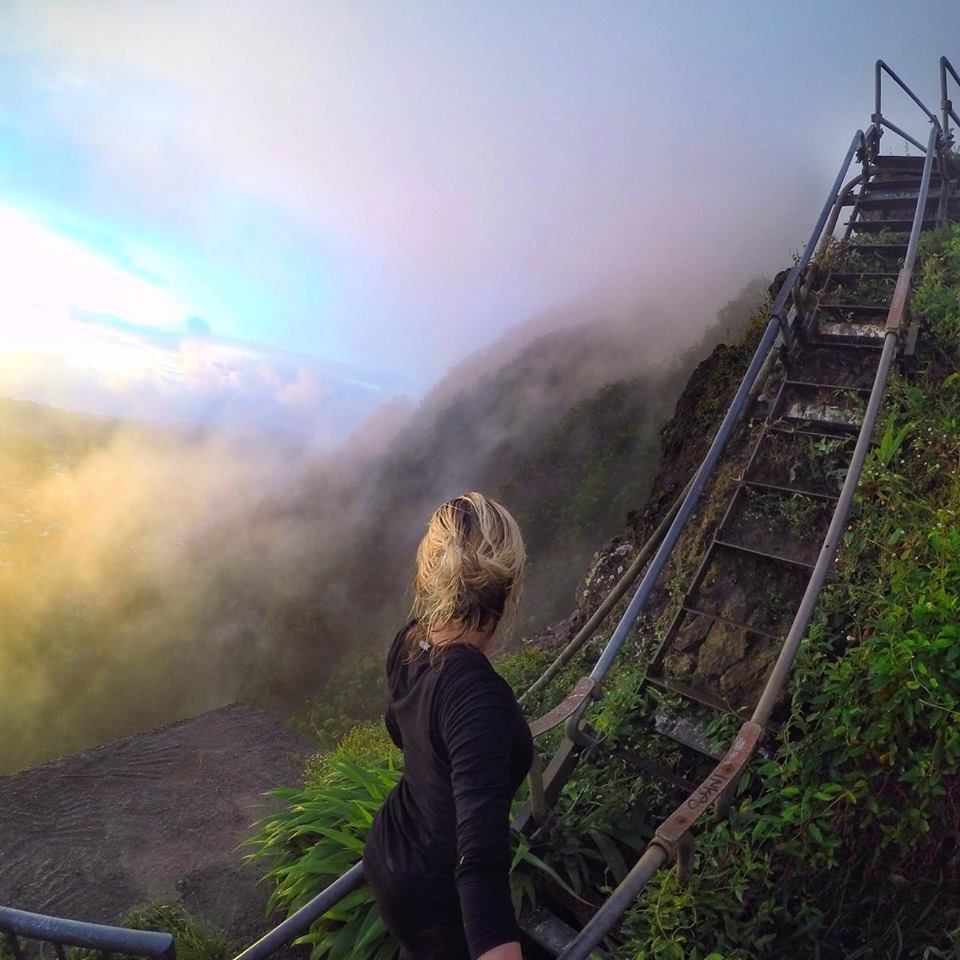 Trust me when I say, I am NOT a morning person. At all. But, I know for a fact, and have photo-evidence of no people at popular places, when I’ve gotten there either before or as they’ve opened. If there’s an opening time, look it up online and plan to get there a few minutes before hand in case there’s still some other early-birdies trying to get the photo-worm as well.

It also helps (me) to set multiple alarms, especially if you label them with things like “GET THE F UP OR NO COOL TRAVEL PHOTOS!” and “Call the taxi NOW!” 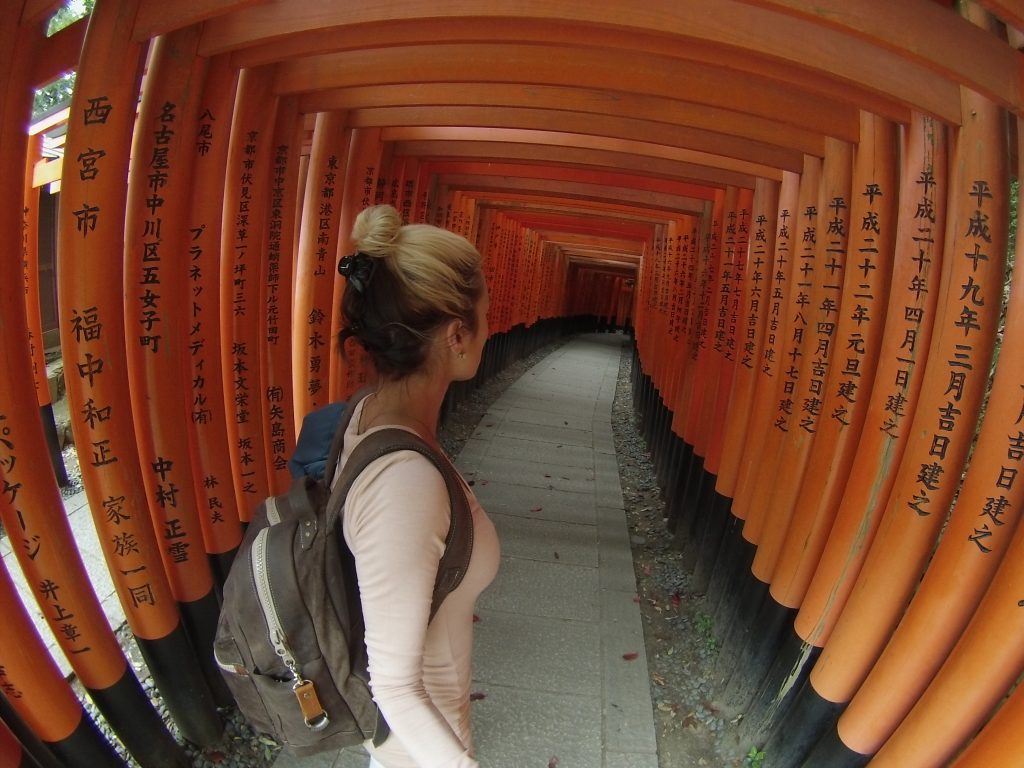 “Where is everybody? OH WAIT. It’s 6am on a Wednesday.”

This should be a travel photo no-brainer, but it’s meant to be more like food for thought when you’re booking your trip and making plans. Don’t forget to look up holidays and events in the country you’re going to as well as your own.

If you can travel during the week, or at least extend your trip into the beginning of the week, do it, because that’s when everyone else will be going home. 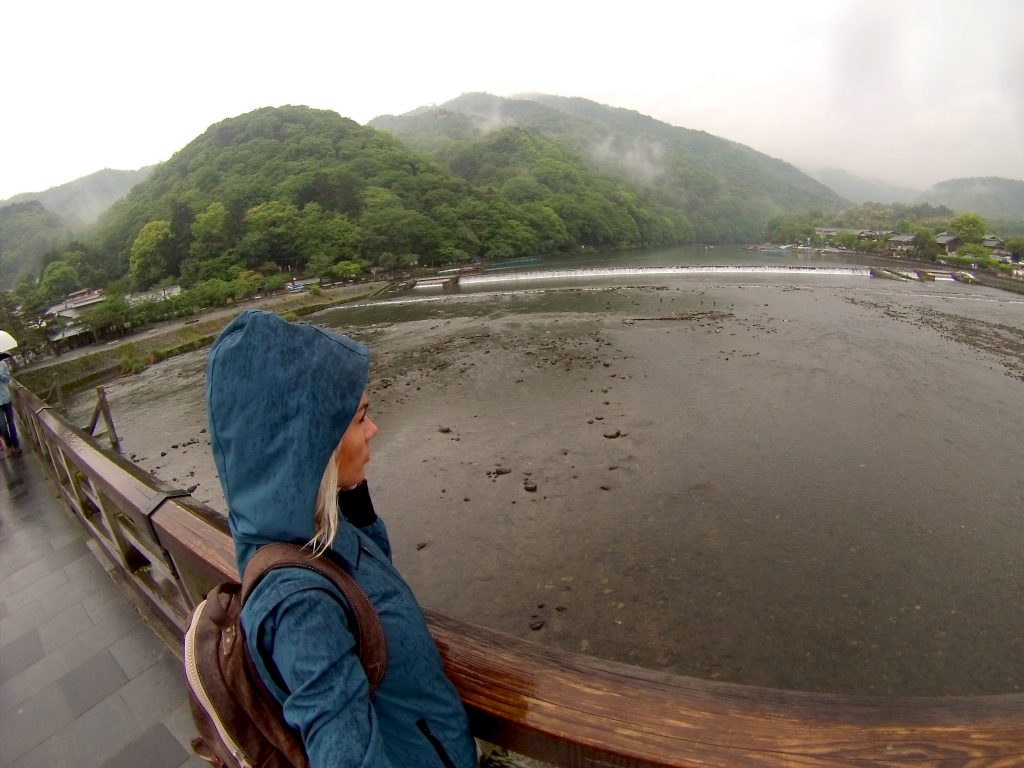 Guess how many people like to go take travel photos during rainy season? Not a lot.

There’s usually a good reason why people travel during high-season, and that usually has a lot to do with the weather. Granted, you may need that good weather to actually get your perfect travel photos, but if you plan things correctly, and have some patience and tolerability, you can probably still get that perfect shot, except with no people in it.

I hiked the Inca Trail to Machu Picchu and just went to India during the “rainy season”, but guess who was patient and waited for the clouds to clear along with any other people in the area?This girl.

4. Don’t aim for one area for the token shot. 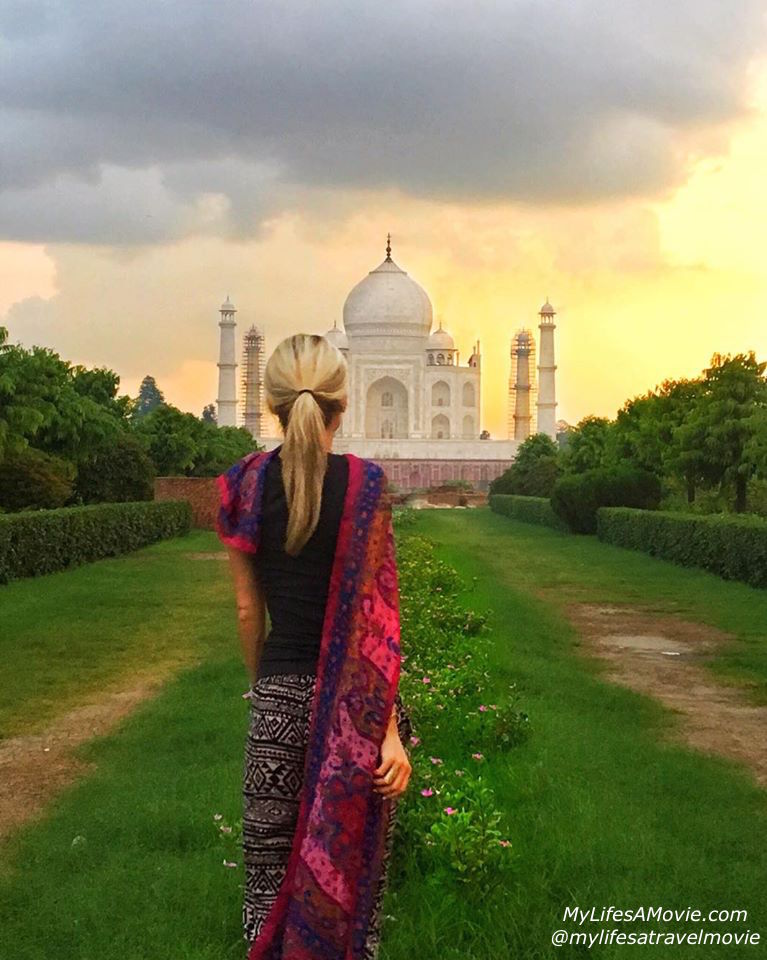 Everyone always wants those token travel photos of the Taj Mahal from the front, but BEHOLD! The back is also awesome!

What makes many travel photos so appealing is that there’s an easily-recognizable landmark in the photo, which many people think you can only get from the exact spot that millions of other people have also taken the photo from.

My tip is to go as far away as possible from that token travel photo op spot, and to experiment with unique angles and lighting as well. 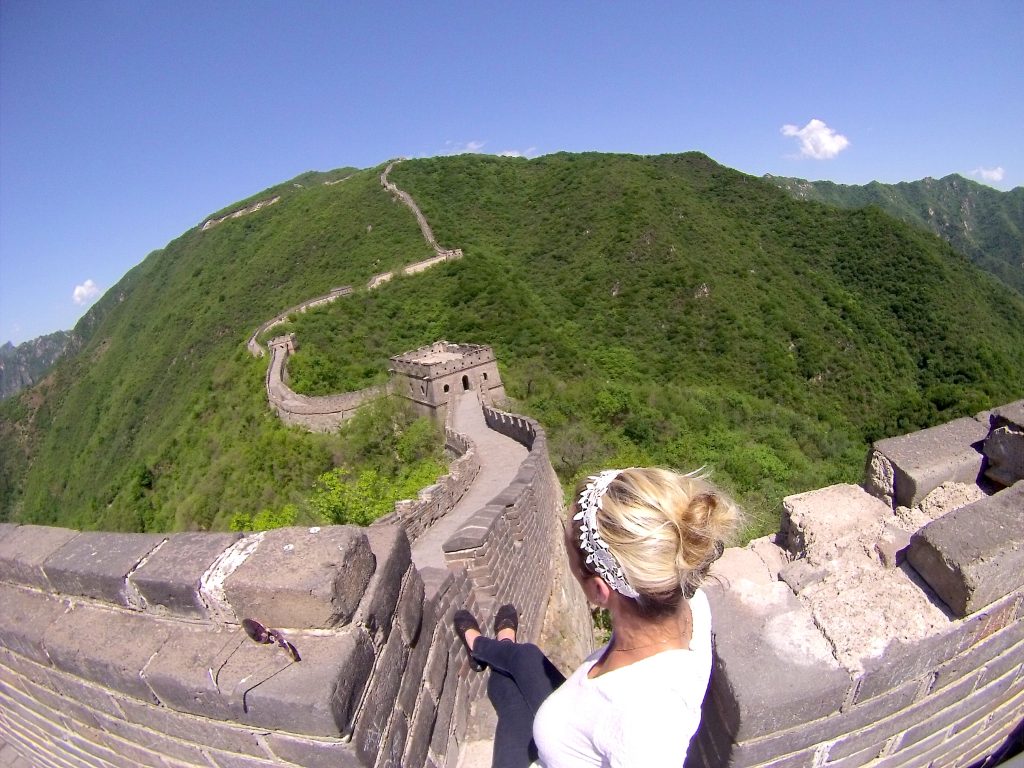 Not only did I go to a lesser-known area of the Great Wall of China early AF, but I sat there and waited very patiently for every last person to get out of my perfect no-people travel photos.

Most of my travel photos with no people in them are made possible by my ability to stubbornly wait until every last person is out of my photo frame before I take the picture. Being patient is totally worth it to get those awesome people-free travel photos, but keep in mind that it also has to be in conjunction with getting there early, and choosing less-preferred areas and angles. 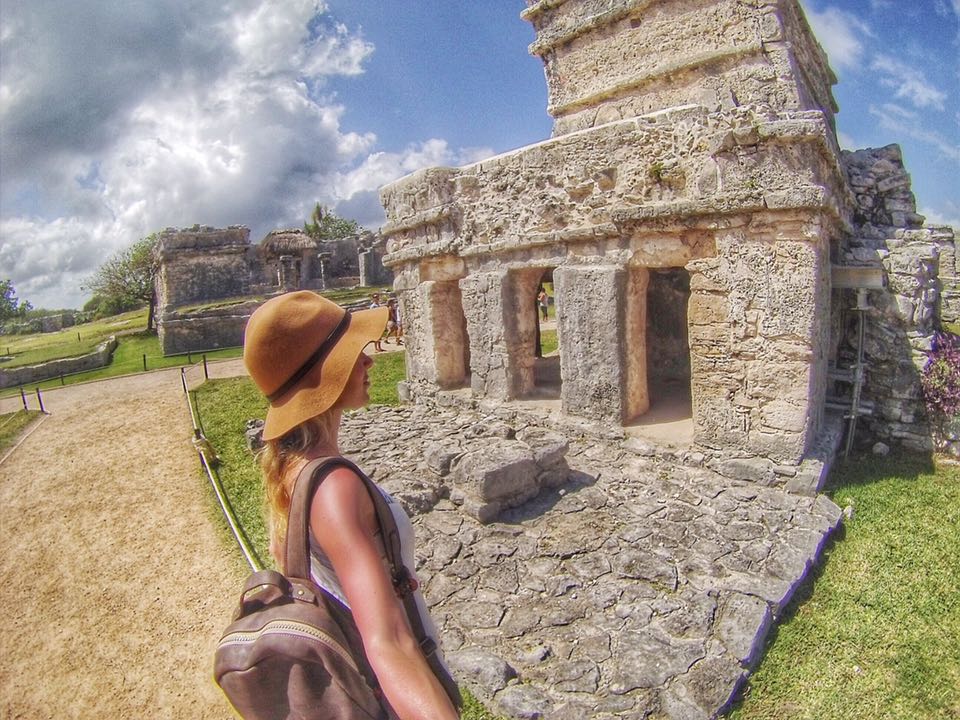 There’s a good chance that there are people on the other side of my head that just will not move out of my photos, so I blocked them instead.

You may notice that the majority of my photos are of some stunning landscapes…and the back of my head. I’ll admit, I include myself in my photos as my signature way of standing out from the rest of the Google images out there, but sometimes I also position my head just perfectly over that person who won’t move out of the frame, or that crowd in the distance that’s right smack in the middle of the token landmark I’m trying to snap.

Oh! I should probably mention that I use my iPhone to preview the photos that I take with my GoPro before snapping them. So I can see if there’s a person in my photo, and then I can either wait for them to move or block them with my big head before I take the picture. 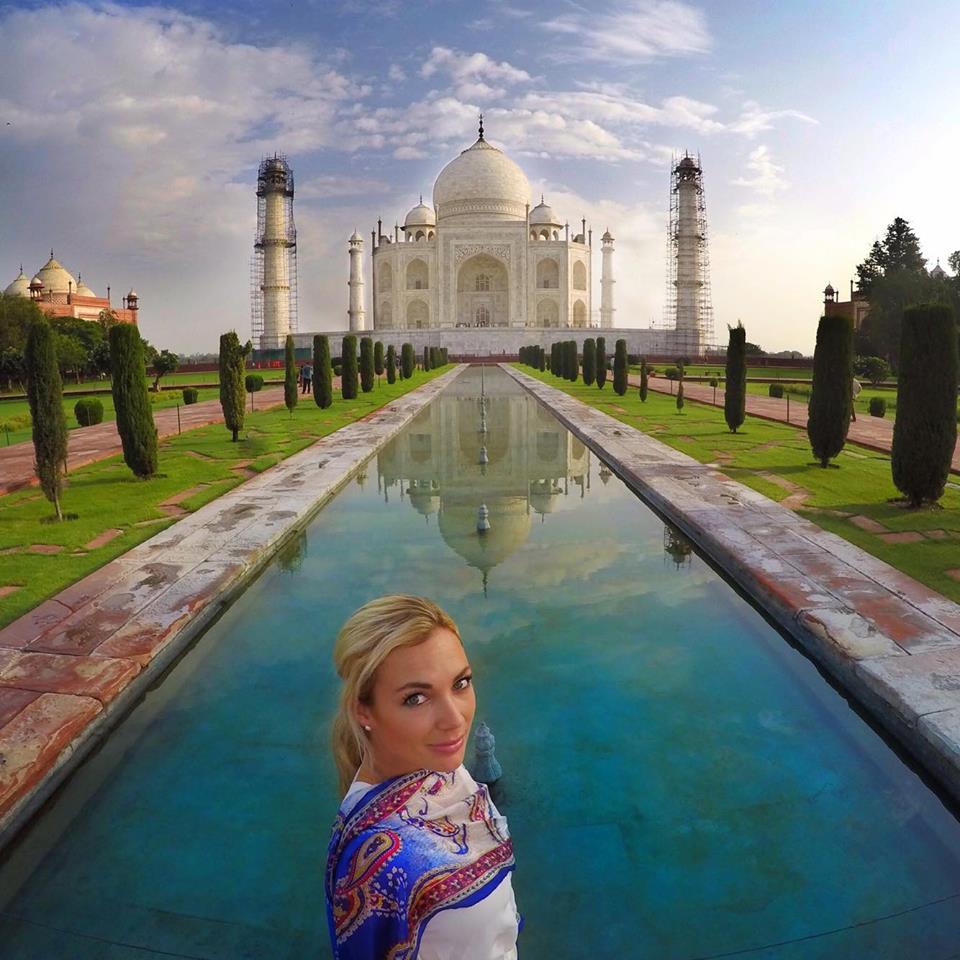 You better believe that I whipped out my GoPro in 0.5 seconds when I got to this spot at the Taj Mahal and saw a clearing with no people!

Not going to lie, I really wish that I owned/knew how to use a DSLR camera sometimes, but not when I’m on an ambitious ass mission to snag perfect travel photos with no people in them. Yes, a DSLR would probably take a very nice high-resolution photo…but in my opinion, it would also take a long time to set up, position, etc. etc.

Some of my best travel photos have come from being able to whip out my camera (which it usually a GoPro Hero 4 Black, or my backup Hero 3 Silver), turn it on, and shoot the photo before the cluster of slow walking people appear from behind the bush or column they’re strolling past.

I also just use my iPhone6 a lot to take spur of the moment photos, since the quality is pretty good, and all it takes is one swipe to turn the camera on.

8. Use angles to your advantage with a selfie stick. 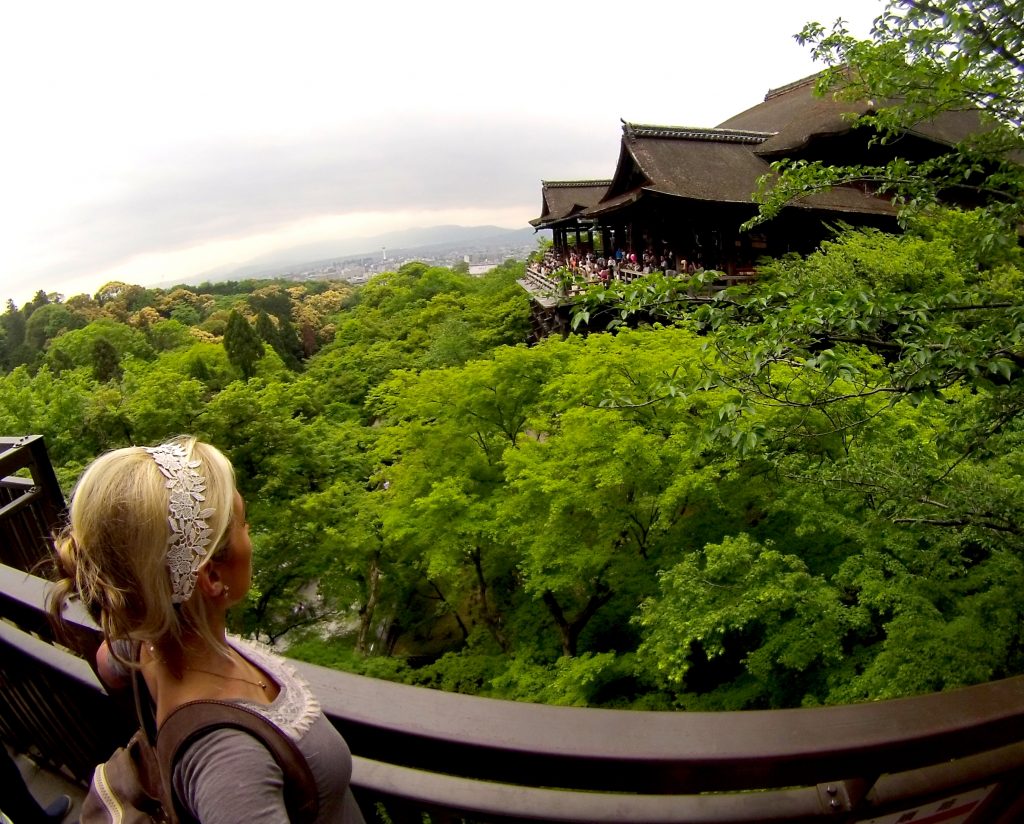 Wanna know why you can’t see the dozens of people around me at Kiyumizu-dera in Kyoto? Because my “selfie stick” is higher than them. That’s why.

Many of you aren’t going to like this, but, selfie sticks can work literal wonders when you’re trying to get travel photos with no people in them. This is of course, if you use them incorrectly. What I mean is that instead of thinking of, and using “selfie sticks” to take a photo of your face, use it to raise or lower your camera in order to adjust the angle enough so that it crops people out of it.

You don’t even have to be in the photo, you can use a selfie stick solely for the purpose of taking good travel photos with no people in them simply by raising it up as high as possible over the other people or crowds! 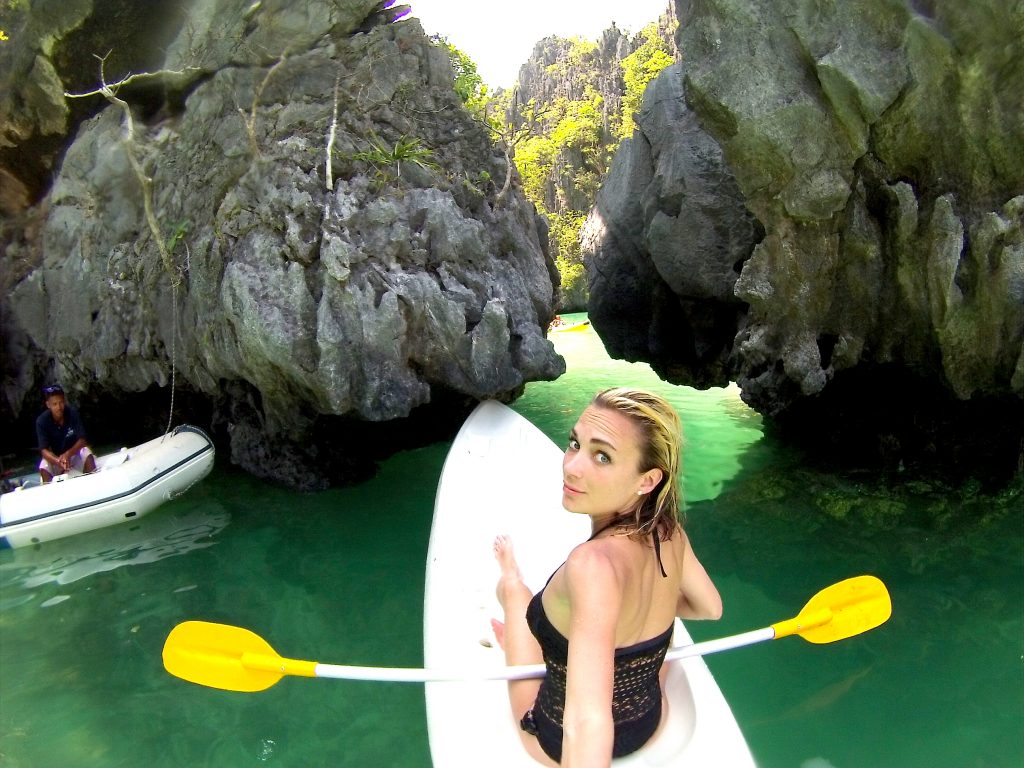 “Excuse me kind sir, could you please row backwards a smidge?”

This one also might sound a bit obnoxious, but if there’s literally just a few people standing in the way of you and some perfect people-free travel photos, don’t be afraid to politely ask if they’d mind stepping over a bit for one little second.

Sometimes all it takes is for you to show extreme frustration and forced patience by starring at them with your camera ready in hand, but for the sake of positivity, let’s just stick to politely asking them to move.

10. If all else fails, incorporate the crowd. 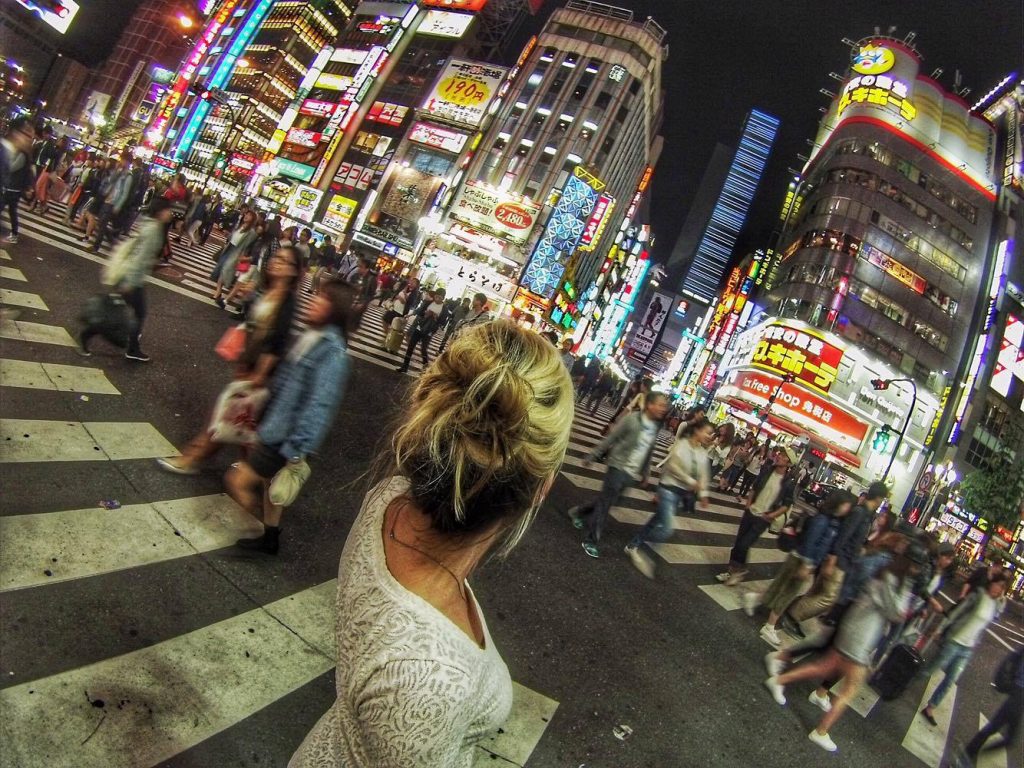 0% chance I would have gotten a shot of Shinjuku Crossing in Tokyo with no people in it so I made my travel photos about them instead!

These are all just tips I’ve come up with based on what I typically do to get my perfect travel photos without any people in them, and as you can see, most of the time it works, but there are definitely some times when it’s just not going to happen.

Sometimes I don’t always listen to my ten alarm clocks, or have time to wait for every last person to meander out of the photo, but I’m not going to just not take travel photos because there are people in them. Instead, I try to get creative and incorporate the people or crowd in a way that will add to the photo.

Sometimes the colors of people’s clothing can make a neutrally colored photo pop, or catching someone’s off-guard expression can make the whole photo more memorable. And if worst comes to worst, you can always crop them out!

This article was first published on My Life’s a Movie and is reposted here with permission.

Tagged
Photo + Video + Film
What did you think of this story?
Meh
Good
Awesome
✖
travelstoke
Download the mobile app
stoked by