CAMERAS ARE ALWAYS COMPARED TO THE HUMAN EYE, but there’s one scenario in which it excels: night time. When our eyes are straining, a camera gathers light over time. The image unfolds slowly, revealing details invisible to us, like the faintest stars, or features of a landscape. It is more a collection of time rather than a moment, allowing us as photographers to create an image, rather than simply take one. For that reason I believe night photography is the greatest form of photographic art.

1. Use the nighttime to bring out textures and colors you won’t see in daylight. 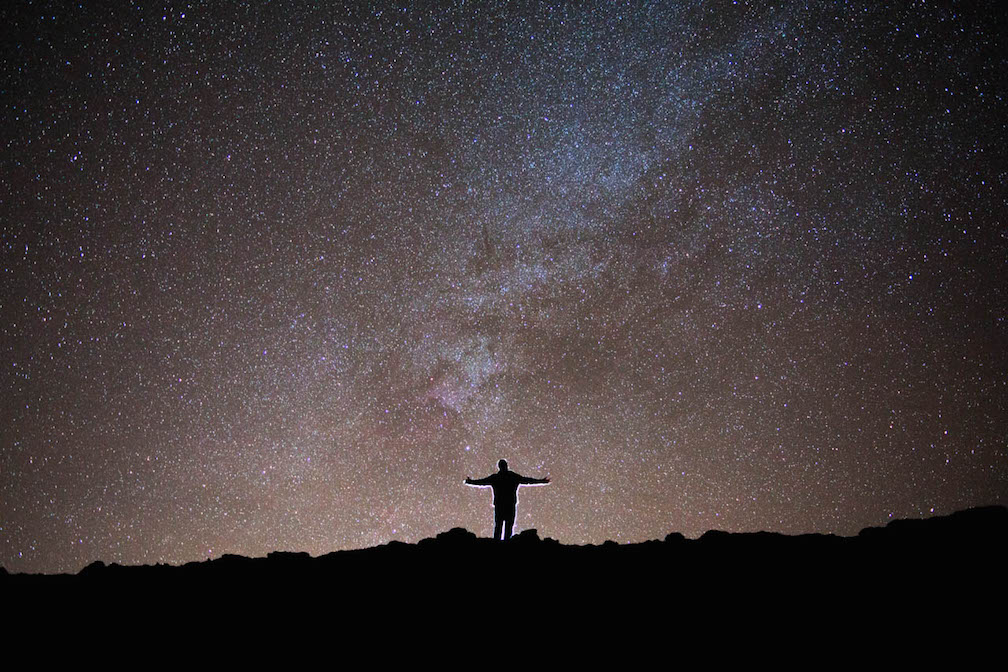 I have been photographing Joshua Tree National Park for years now, and I spend about two nights a week out there when I’m not traveling out of town. I take more photos at night there than in daylight. During the day the desert can look flat, desaturated and boring. Night photography has a way of bringing out colors and textures that are hard to see in direct sunlight, and the starry sky adds a depth greater than that of clouds during the day. It gives a sense of our place in the universe. I can give you the metadata for this image, but knowing what settings I used won’t be what gets you a great shot. It’s knowing the thought process and techniques that will allow you to take an image like this. The principles of night photography are the same as those that we use during the day, just stretched out, so as to allow more light to enter the camera.

2. Use Manual mode to capture stars. 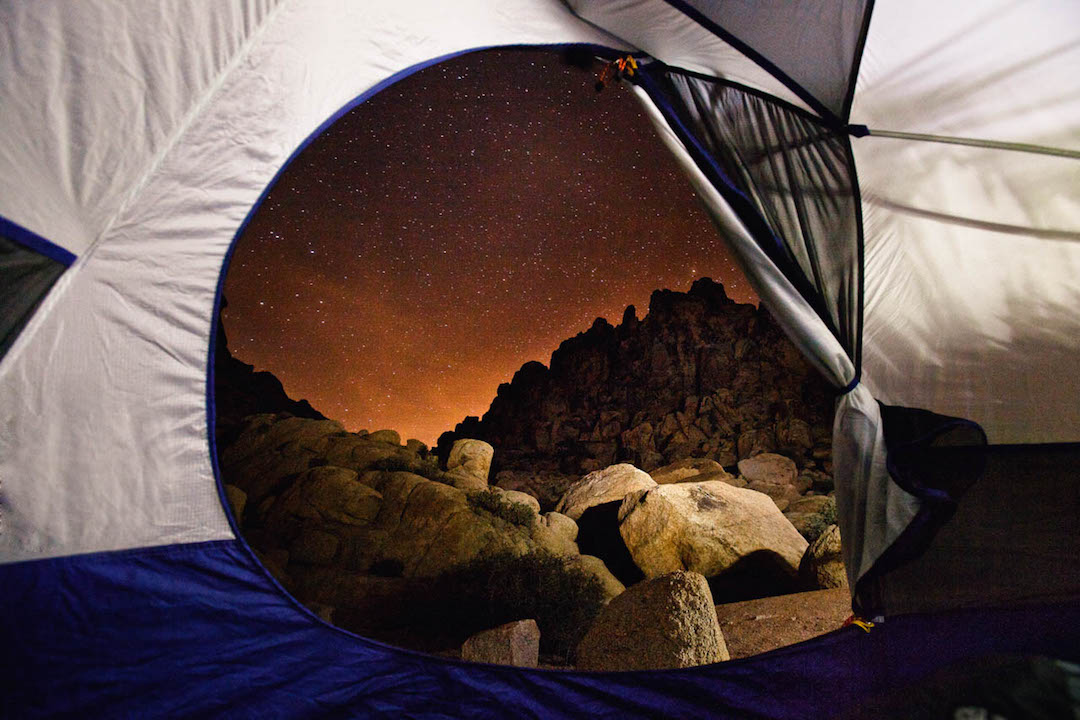 If your goal is to photograph stars, then a moonless night is when you want to shoot. If you don’t have the luxury of waiting for a moonless night, then it is possible to shoot away from the moon, or you can time your shoot for before or after the moon has left the sky. The added light from the moon can wash out the stars, drowning them in light. When trying to balance the exposure at night it is best to use the settings that offer the most control. Camera light meters are designed for daytime use, and although sometimes I use aperture priority to get a quick suggestion from the camera, I always switch to Manual, so that I can fine-tune the exposure, and so that it won’t change between shots without my input.

3. When shooting the moon, expose for it. 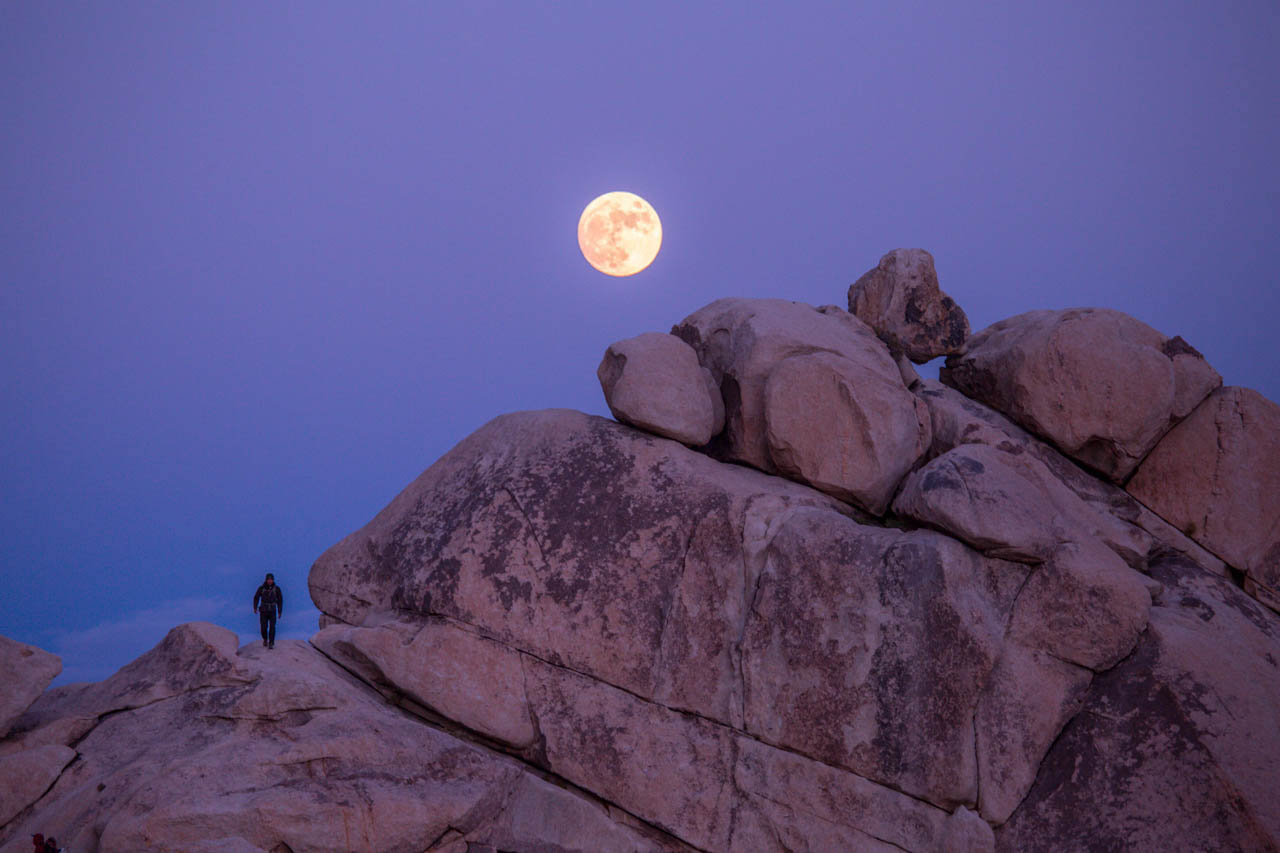 An image photographed on the full moon can have the same quality of light as one taken during the day if you set up your camera correctly. The trick is to expose for the moon itself. If you expose for the dark landscape, then the moon will look just like the sun, a white flare of light in your image. By underexposing, the details that make the moon so recognizable begin to show themselves. This image was taken maybe 30 minutes after sunset, and to the naked eye, the landscape was falling into darkness, but there was still enough light being reflected by the moon and the atmosphere to bring out the details in the hiker, and in the rocks. I used a 400mm telephoto lens to bring the moon closer to the distant hiker, creating the feeling that it was hovering just over his shoulder.

4. Buy the most expensive tripod within your budget. 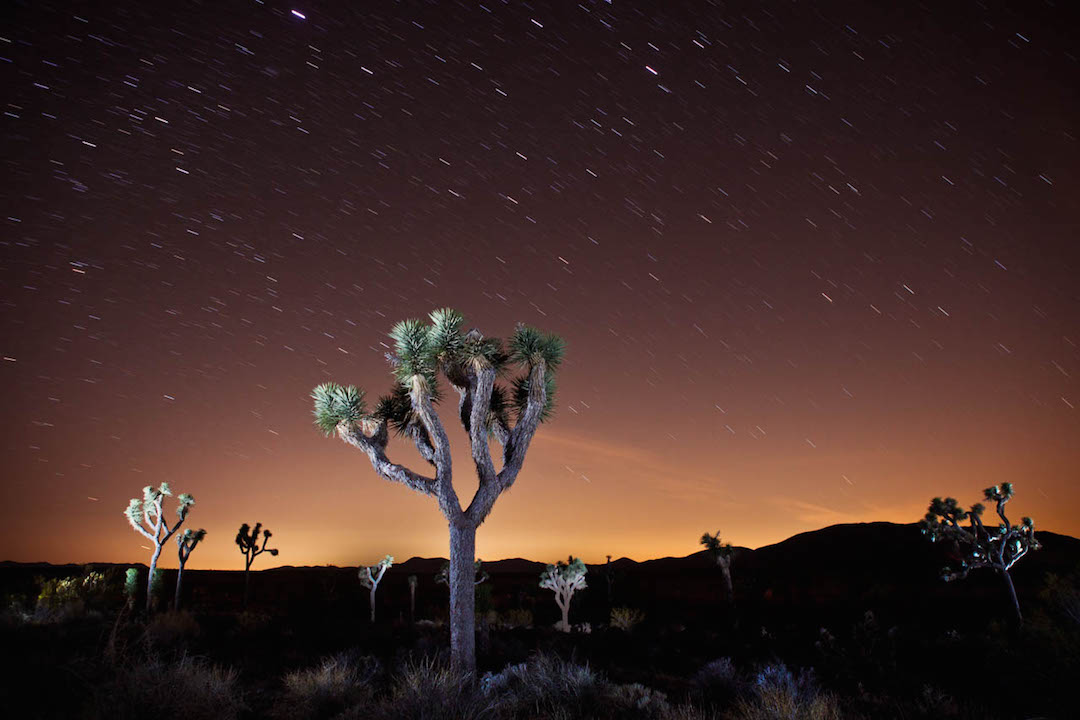 There is no piece of equipment as important to successful night photography as the tripod. I’ve eked out a few images by balancing my camera on a rock, but they are never as good, and it’s dangerous for the camera. When looking for a tripod, spare no expense and buy the best you can afford. If you buy a cheap tripod, you will end up spending more money by having to replace it time after time. Cheap tripods break easily, don’t hold the weight of your camera steadily, and, in the worst-case scenario, their instability can lead to a smashed lens, camera, or both. I use a carbon-fiber Manfrotto tripod. The carbon fiber absorbs vibration, and I’ve never had a Manfrotto tripod break, or lock up even after using them in the ocean. The tripod head is equally as important, it’s more than just a connection point. A good tripod head will anchor your camera to the tripod, lock, and give you the range of motion to point the lens in any direction.

5. Learn how to make due when you can’t use a tripod. 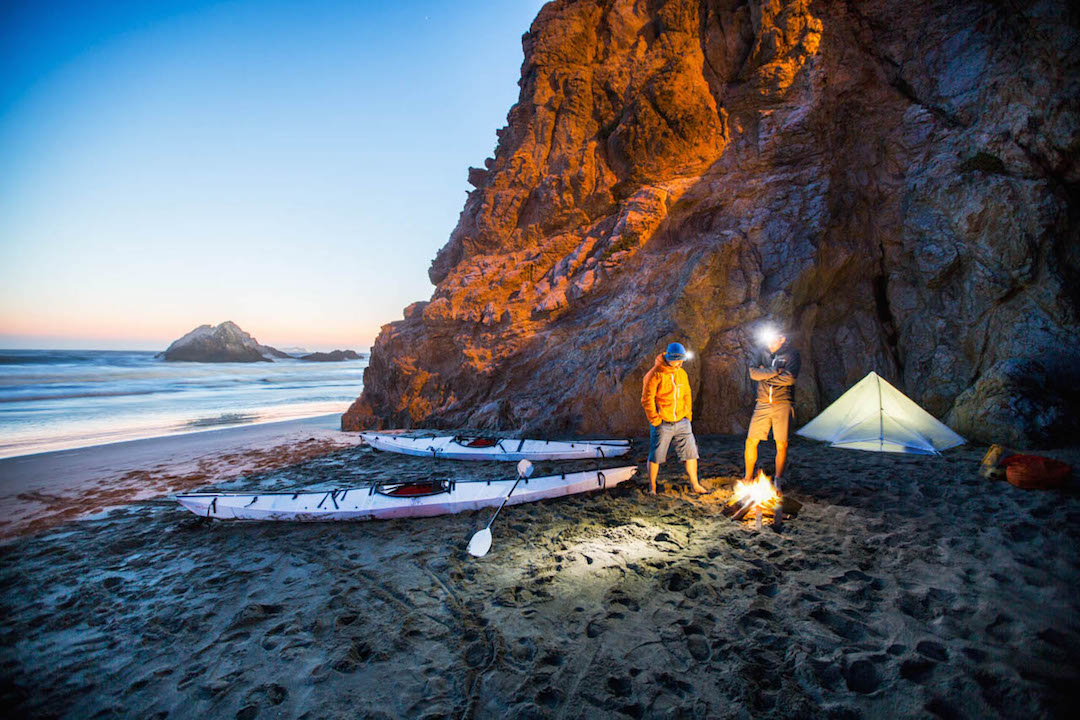 Even after stressing the need for a tripod, there is always an exception to the rule, and being able to photograph a night scene proficiently means that sometimes you have to be able to capture the image, even without the preferred equipment. I was on a shoot for ORU Kayak and Boreas Gear, and before we were done, the day had faded into night. It was the last day of our shoot, and I had to get a few more images before I was done. We set up this scene, and to stabilize my camera, I leaned against a rock, and added some tension between myself and the camera by tightening down my camera strap. That tension helps stabilize the camera to my body, and my body is stabilized by the rock. It won’t work for super-long exposures, but, in a pinch it will work. The elastic strap that comes with your camera may not work, and I like the adjustability of the ultra-sturdy strap that I use from Blackrapid.

6. Pick the right lens for your exposure. 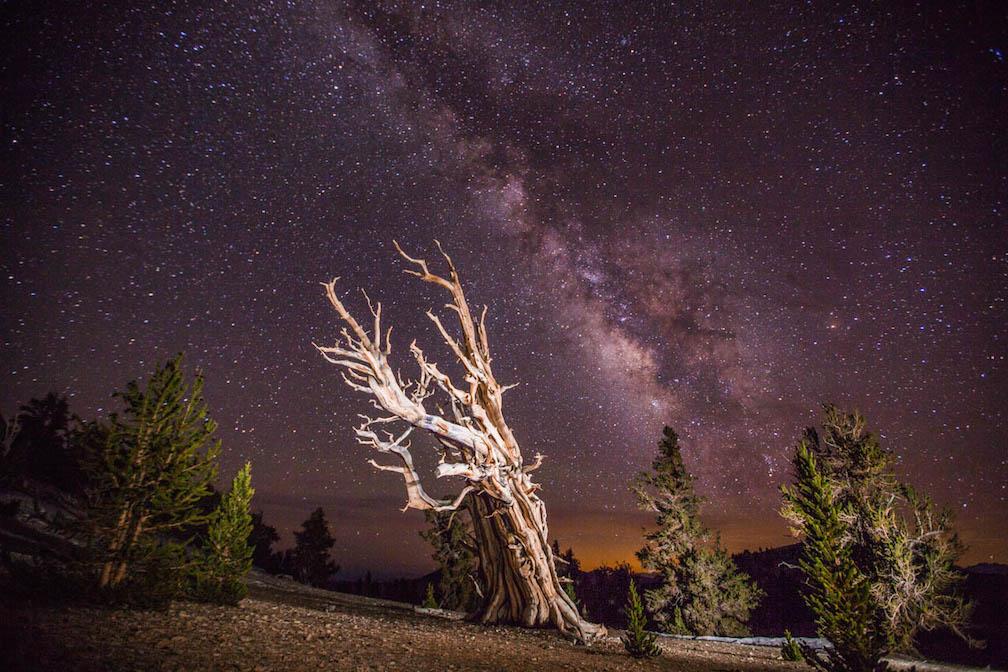 When shooting the Milky Way I prefer to use a lens anywhere between 16-35mm; the wide angle will give you a wider view of the sky, and the motion in the stars will be subdued. At 16mm I can get away with a 20-second exposure and the stars will still be sharp; at 15 seconds they will be a pinprick of light. A lens that is capable of resolving more detail than the kit lens that came with your camera will help keep the stars sharp. I’m a huge fan of Zeiss — their lenses have provided me with some of my best star photos due to greater sharpness and contrast. To capture an image of the Milky Way, you must shoot with a wide angle, and you must make sure that there is no motion to the stars, otherwise the details will blur together, leaving you with an image that looks more like a cloud than a galaxy.

7. Get “lazy” when photographing lightning. 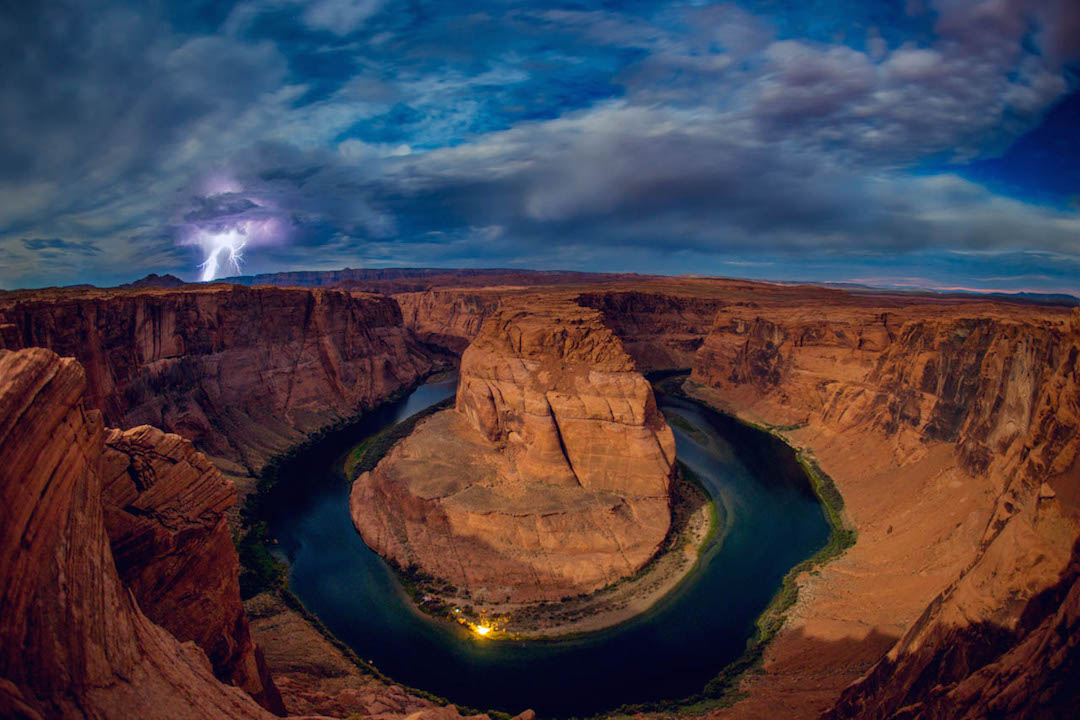 I had run the half-mile or so of desert trail in the dark to reach the edge of this chasm in time to photograph the remnants of a storm as it drifted away. I was seeking an image of lightning over the iconic Horseshoe Bend in Arizona that is often photographed at night. It’s almost impossible to time capturing the lighting by pushing the shutter button, by the time you see it, it’s already gone. Instead, the way that we photograph lightning is actually quite easy, and can even be described as lazy. Set your camera to the longest exposure it can handle, taking into account the light on the landscape, push the button, and wait. Most cameras will keep the shutter open for up to 30 seconds. Your hope is that the lightning will happen while the shutter is open, and that it is in the frame. If you want to get really lazy, get an intervalometer, and set it to take multiple 30-second exposure images in a row. Just be sure to allow the camera a few seconds in-between exposures to let the sensor cool down, otherwise your CCD will start to overheat.

8. Play with different sources of light. 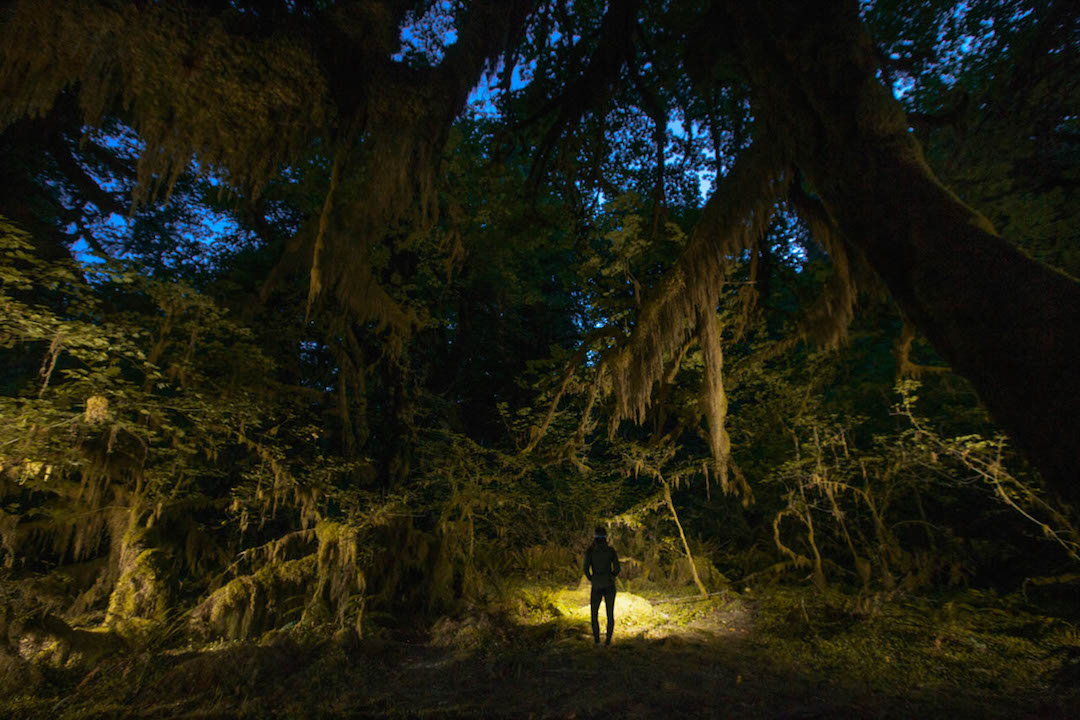 The great thing about photographing at night is that you can add light in subtle ways that would be impossible against the full power of the sun. Something as simple as a headlamp or flashlight becomes a paintbrush. There are really only a few tricks to it. Never shine the light from the same location as the camera. If you do, the light will look flat, and you will be subtracting depth from the image. Instead, create depth by shining the light from the side, or even behind the subject. Don’t let the light shine toward the camera unless you are hoping to catch the trail of the light in the image. And remember, a little light will go a long way, so start off slowly. Once you get proficient, start incorporating different kinds of light; an LED will have a different color than a Halogen light, and you can use those colors to create some wild effects. A flash works as well, but in my opinion is harder to control. The quick and powerful illumination from the flash is less subtle, but is useful for stopping motion.

9. Find the North Star to create star trails that center on a single point. 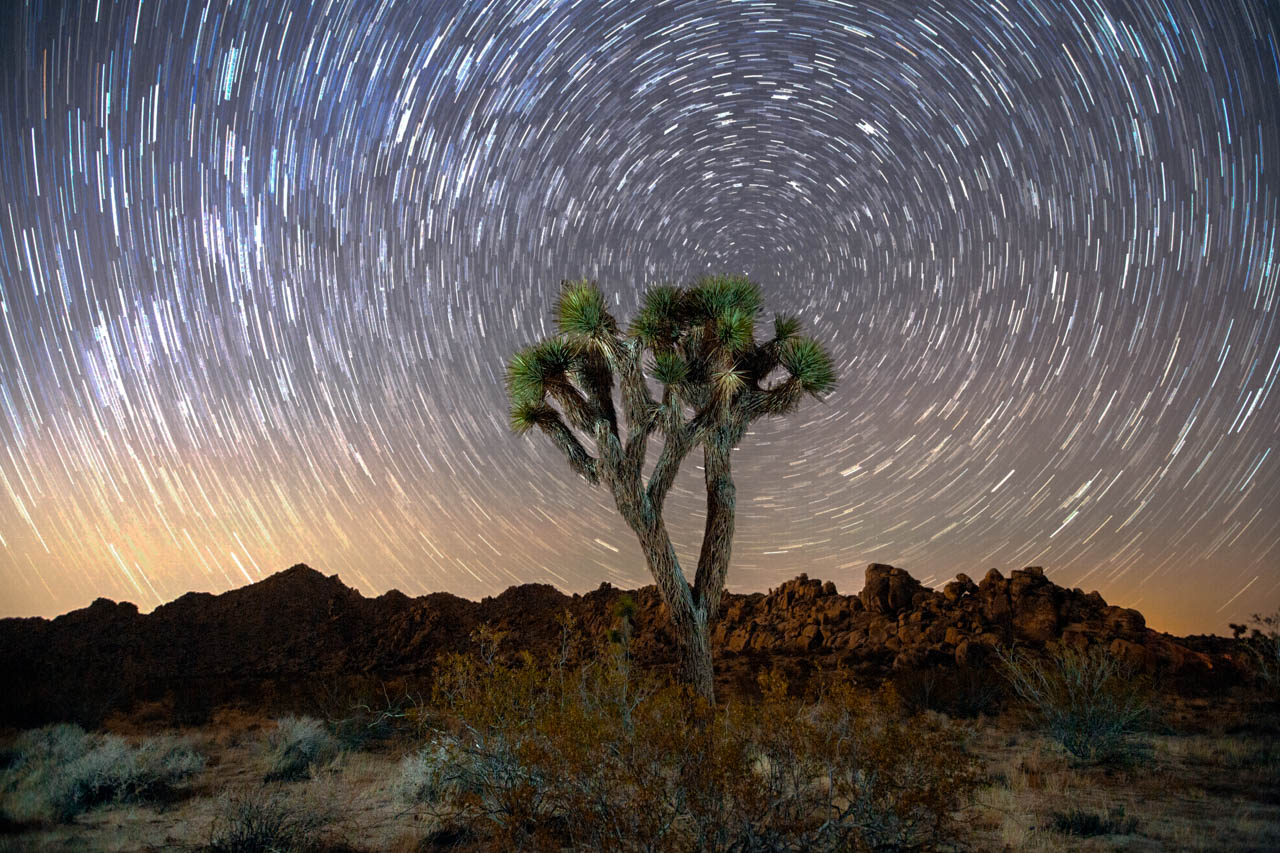 In the days of film, we could leave the shutter open for hours at a time without risk of overheating the camera sensor. Now, with digital, it’s possible to get the same effect of an ultra-long exposure, but it’s done in a very different way. For this, an intervalometer is mandatory. Take a series of images, each with an exposure of about 15-30 seconds, with a minimal cool down time between each image. There are apps like Starstacker that will then take the images and combine them all into one photo, creating the star trails. The most iconic star trails are the ones where the stars all rotate around a single point. To achieve this affect, first you must find the North star “Polaris.” It is the only star in the the sky that doesn’t move. A compass helps, but if you know how to find the big dipper, a quick trick is to draw an imaginary line from the foremost stars of the ladle, the first bright star in that line is Polaris.

10. Learn the rules…and then break them. 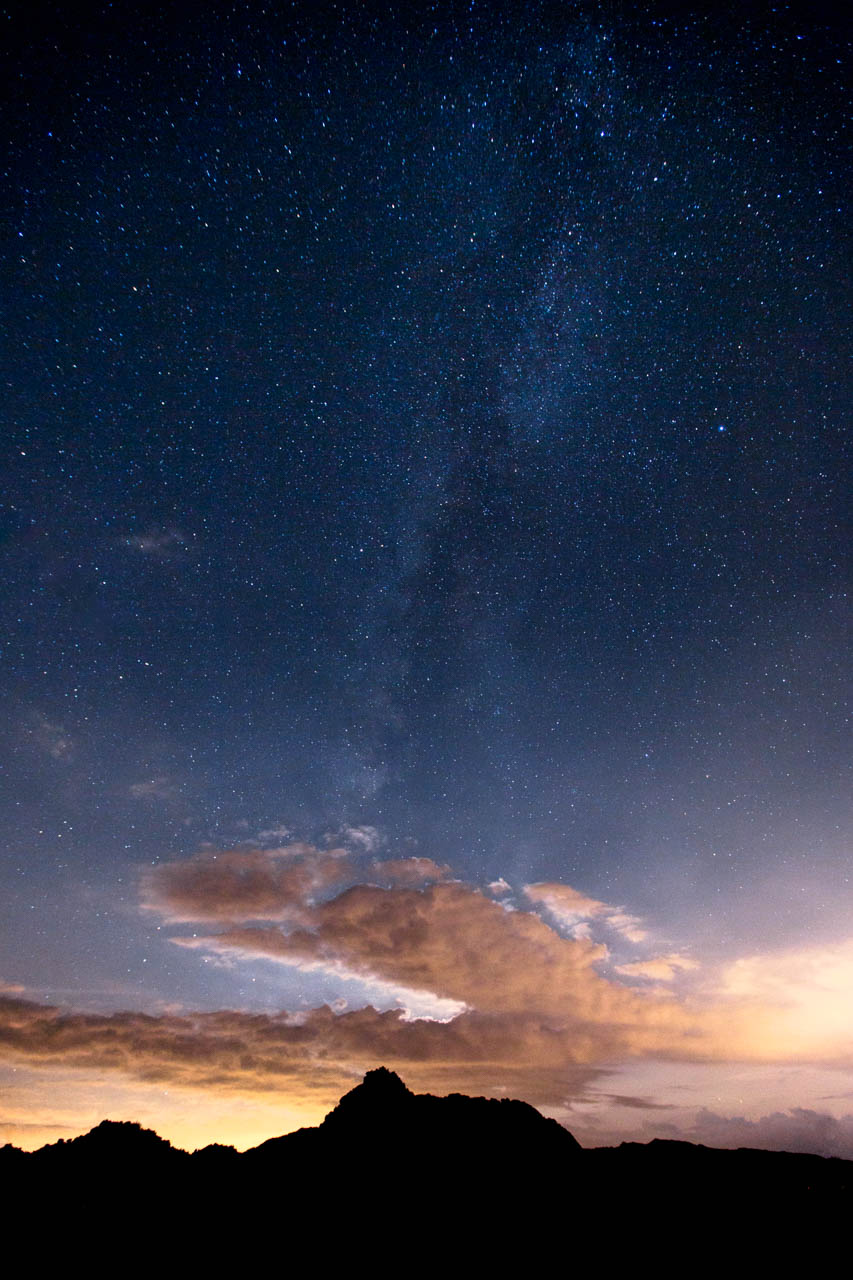 This is the No. 1 rule to any art form. Never take anyone’s advice as gospel, especially mine. Only in this way will you create something unique. This image was taken by pointing the camera directly at the full moon, which was obscured by clouds. The light from the moon lit up the clouds like a sunrise, creating a very unique image that combines the feeling of a sunrise with that of astrophotography. The only way you’ll know how and when to break the rules, is by getting out there and trying different things.