In an isolated corner of northern Mongolia, straddling the border of Russian Siberia, a small but remarkable community makes it home on the sprawling tundra. The Dukha people, who number around 500, live a remote nomadic life, migrating from place to place in search of valuable resources. They are notably different from other nomadic tribes because of the livestock they keep: not yaks, camels, goats or horses, but reindeer. Also known as the Tsaatan people, these reindeer herders have been attracting international attention over the past few years for their unique and unchanged way of life.

On our recent trip to Mongolia, we traveled north from the town of Moron by van to meet up with a nomadic family. We rented their horses and took a two-day trek to reach the distant taiga, camping along the way. Once we arrived we stayed with Magsar, Amgaa, and their family of three. We spent three nights learning about their culture, helping with daily chores, herding the reindeer, and simply experiencing how life goes on in the taiga. While not everything went smoothly, it was by far the most rewarding and memorable time of our travels. This is our photo journey to the Tsaatan reindeer herders.

This article originally appeared on Yahoo! Travel and is republished here with permission. 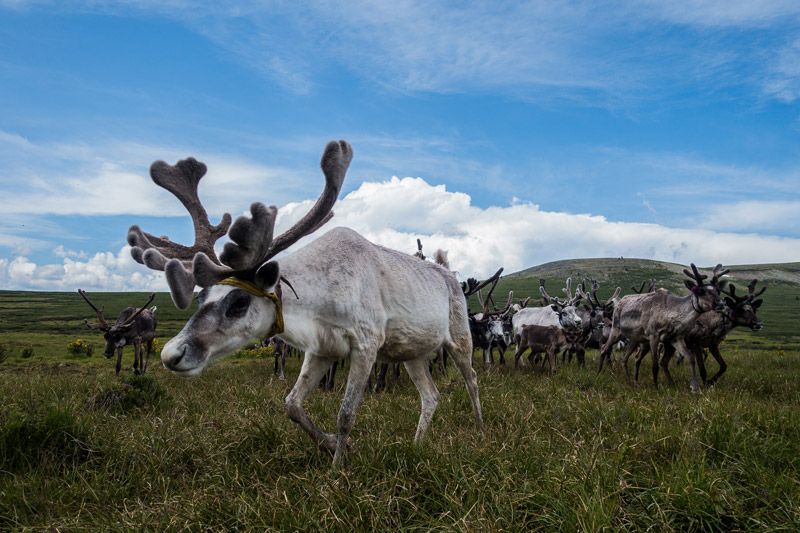 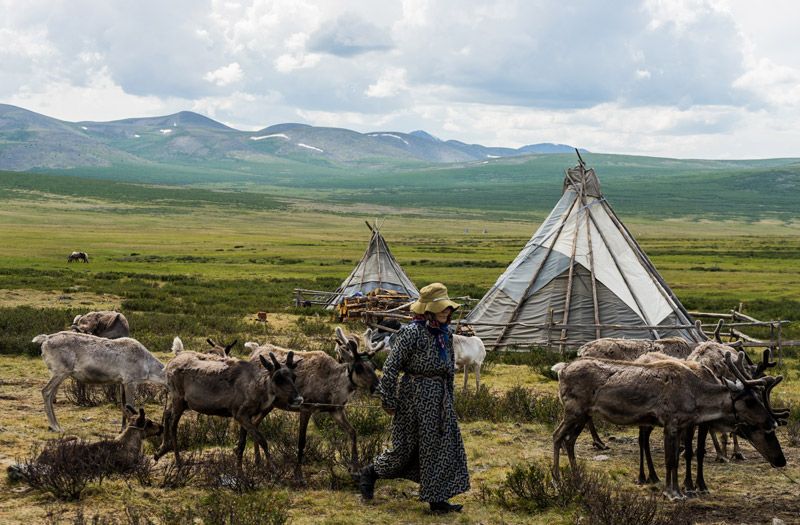 A day in the life of the Tsaatan community is unique to anything you could experience elsewhere. In the morning the reindeer are milked and then set free to wander the taiga. They show up periodically during the day and the herders tend to them as needed. Photo: Alesha Bradford / NOMADasaurus 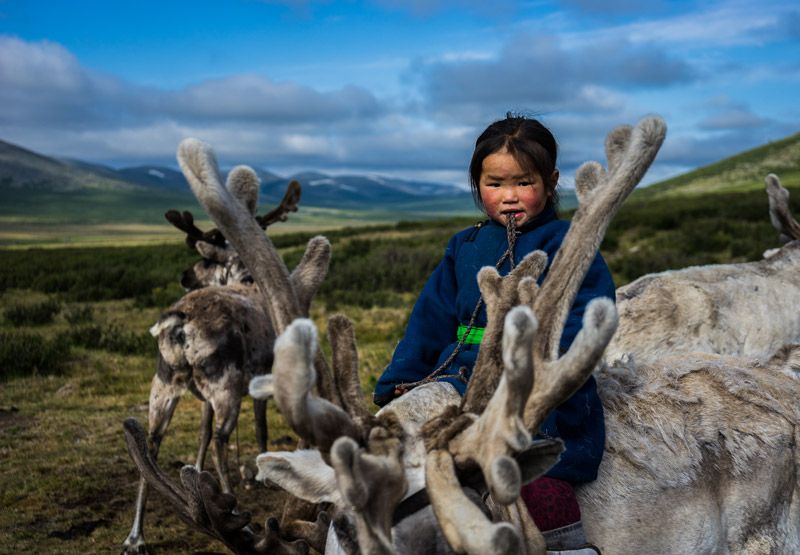 With no forms of modern entertainment, the Dukha people live a life of simplicity and necessity. For this three-year-old girl, riding a reindeer is not only fun, but also an important skill to learn. Photo: Jarryd Salem/NOMADasaurus 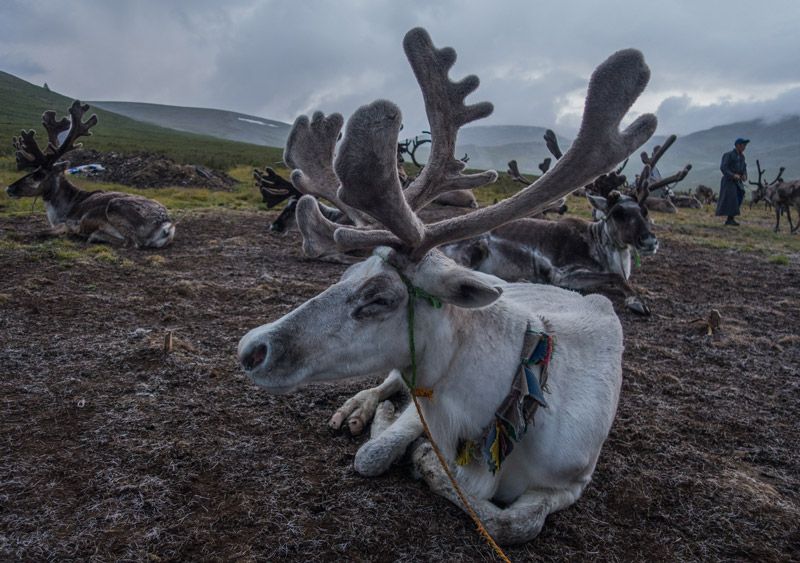 The reindeer do not resist when you tie them up at night. They know they are protected and have no reason to run. Photo: Alesha Bradford / NOMADasaurus 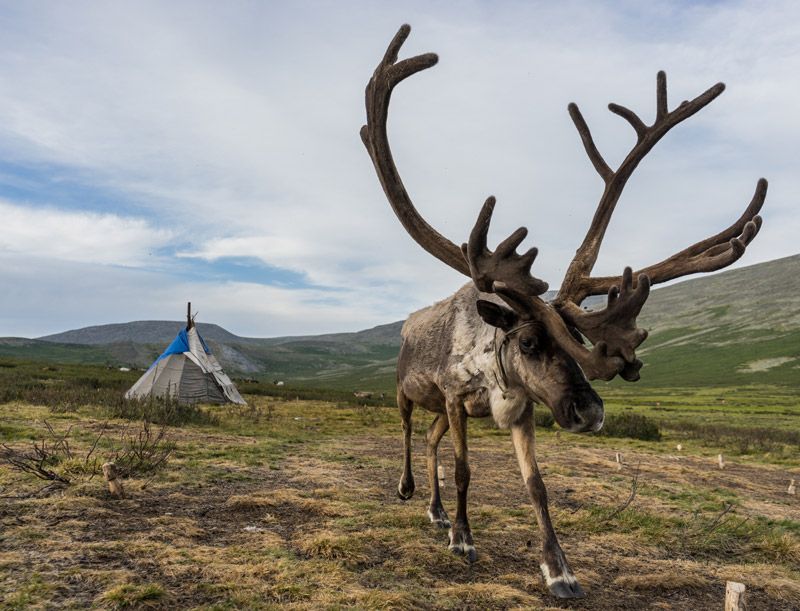 Every winter the antlers fall off of the reindeer, and grow back larger every summer. Full adult males look quite imposing with their branch-like horns, and it is not uncommon to meet many reindeer that have had their antlers broken from fighting. Photo: Alesha Bradford / NOMADasaurus 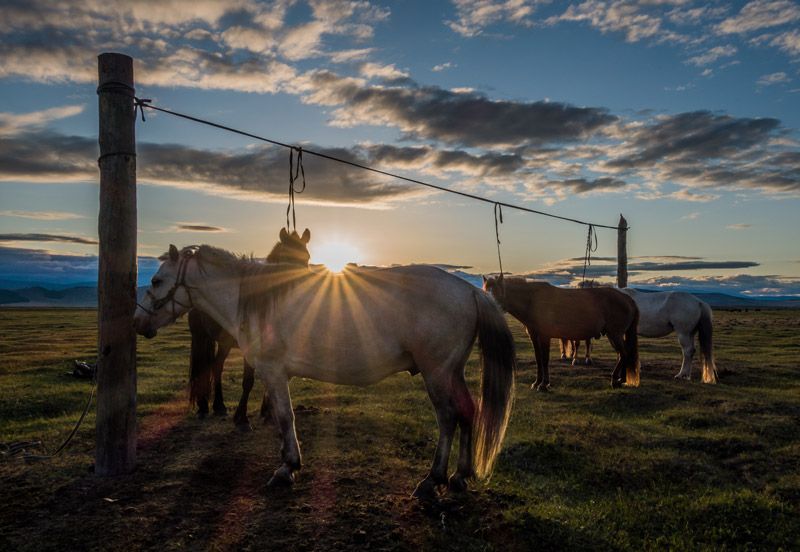 We began our journey with a ten-hour car ride to a tiny nomadic ger camp outside the village of Ulaan Uul. We arrived just in time to watch the sunset, and then fell asleep on the floor of the ger surrounded by the family. Photo: Alesha Bradford / NOMADasaurus 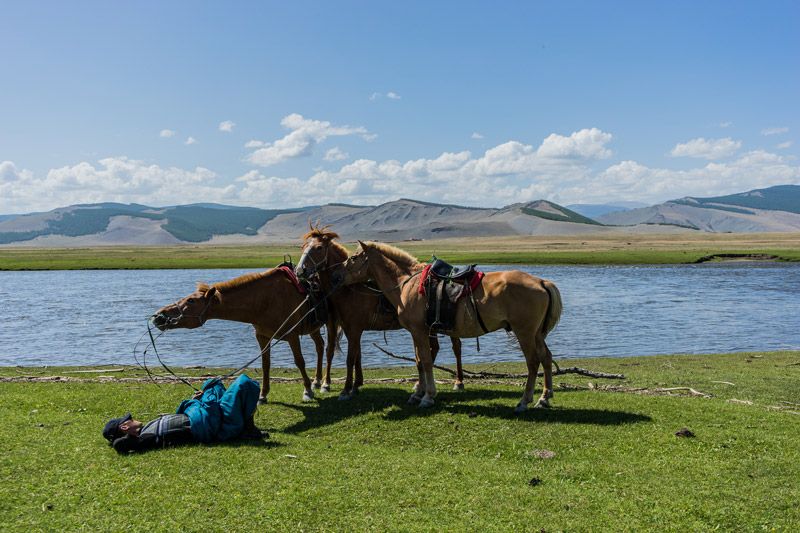 The first day’s horse trek was exhausting and far from ideal. We followed a road through infinite steppe for more than eight hours. Underneath a pounding sun, with an inadequate water supply, we were forced to stop for countless rest breaks. Later we found out that our horse guides had taken us the wrong direction, therefore exposing us to unnecessary hours of trekking. Photo: Alesha Bradford / NOMADasaurus 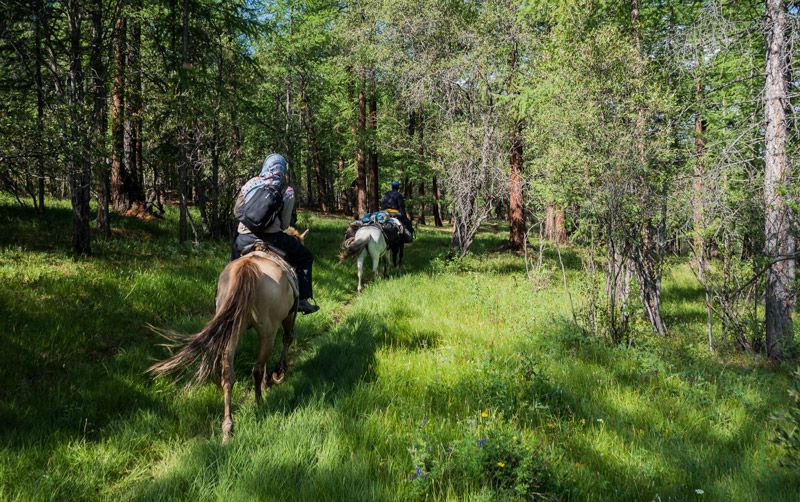 Finding the way through the forest

On the second day we finally reached the pine forests (which, we were told, we should have been horse trekking through the entire time). Our friends had turned back due to a pre-exisiting injury, leaving just the two of us to continue on toward the taiga. Once we had left the steppe the scenery, and our moods, improved dramatically. Photo: Jarryd Salem / NOMADasaurus 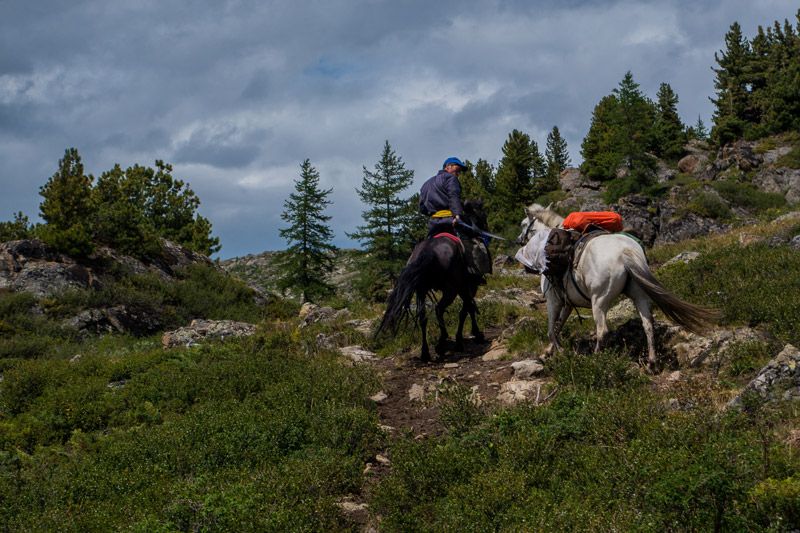 We rode through an intense storm which left the ground saturated and perilously muddy. Near the end of seven hours wandering, we reached the final hill to climb before we would arrive at the fabled taiga. Photo: Alesha Bradford / NOMADasaurus 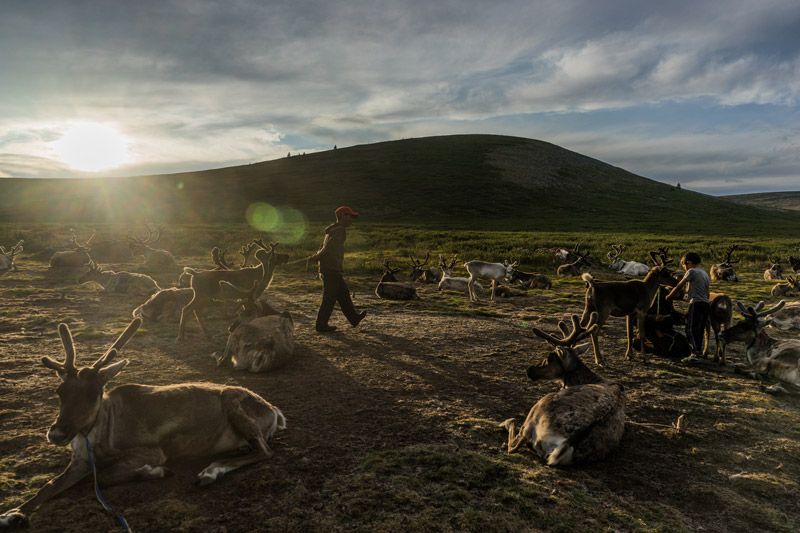 The first time we rode into the camp of Magsar, Amgaa and their family, we were confronted with a herd of reindeer relaxing at dusk. It’s a sight that will stay with us forever. Photo: Alesha Bradford / NOMADasaurus 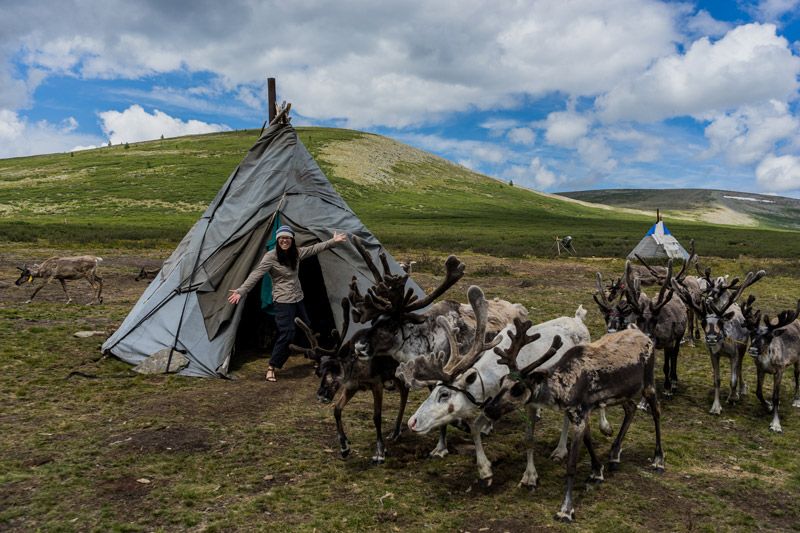 Where the reindeer roam

We were given an option of pitching our tent for free or staying in a spare teepee, known as an ortz, for $10 a night. We were more than happy to help contribute some money directly to the family and chose the teepee. Completely surreal. Photo: Jarryd Salem / NOMADasaurus 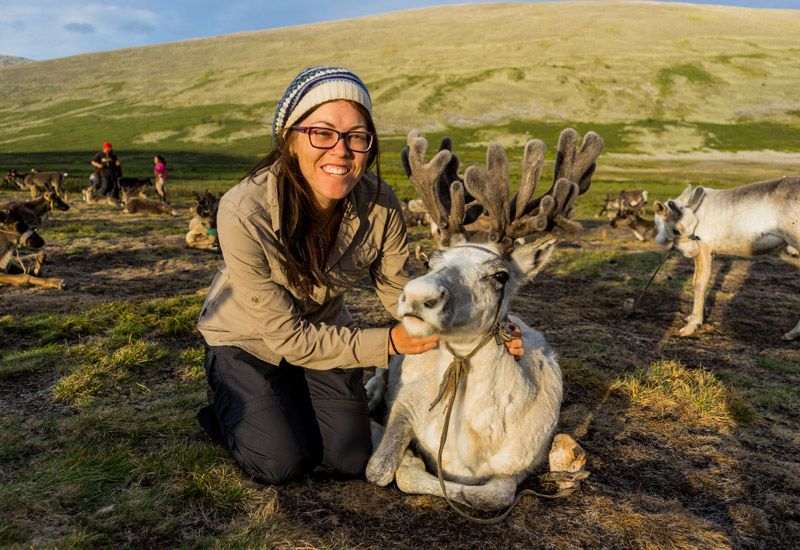 The Tsaatan people treat their reindeer like members of the family, as they are their primary source of food, milk, tools (made from their antlers), and transport. They very rarely eat reindeer meat — the animals are more valuable to them alive than dead. Surprisingly the reindeer are completely tame, and used to human interaction. Photo: Jarryd Salem / NOMADasaurus 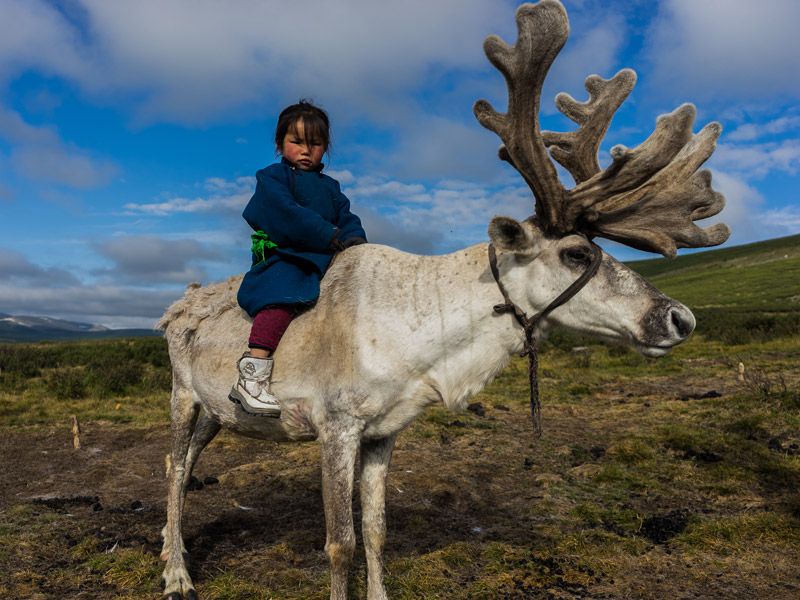 We awoke on our first morning and saw that the neighbors were packing up their camp. We wandered over to say hi and met this gorgeous three-year-old girl riding her white reindeer. We chatted to her mother with sign language and hand signals, and found out she had been riding independently from the age of one. Photo: Jarryd Salem / NOMADasaurus 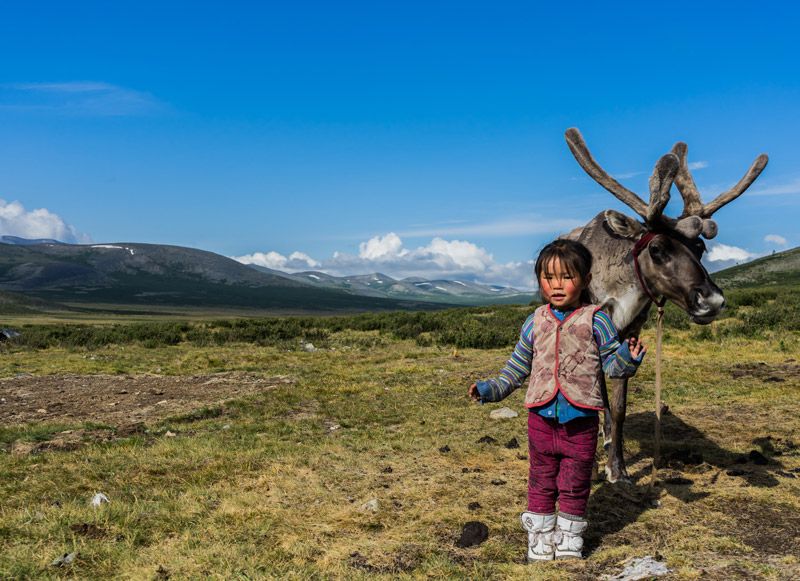 The girl was so photogenic. When we tried to photograph another reindeer she hopped off of hers and ran over to pose for the shot. Photo: Jarryd Salem / NOMADasaurus 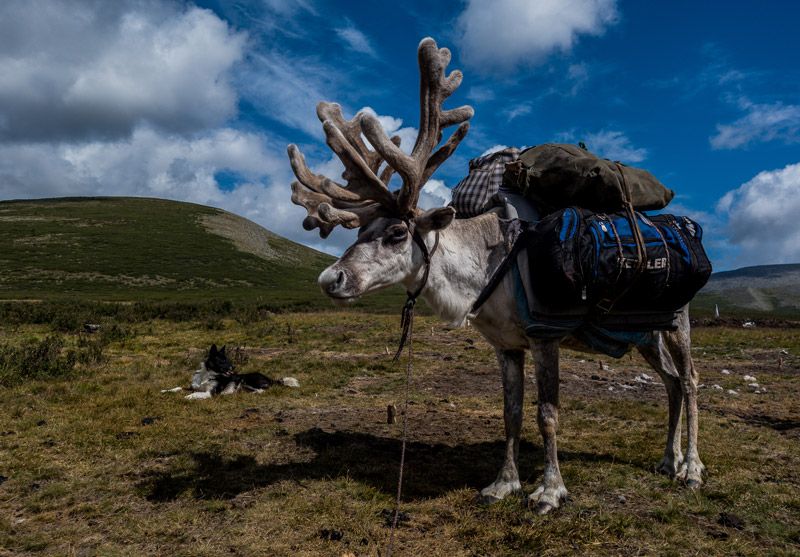 Living as truly nomadic people, the Tsaatans pack their camps up and move from place to place searching for the special kind of lichen that their reindeer feed on. Their main method for transport is reindeer, of course. Photo: Alesha Bradford / NOMADasaurus 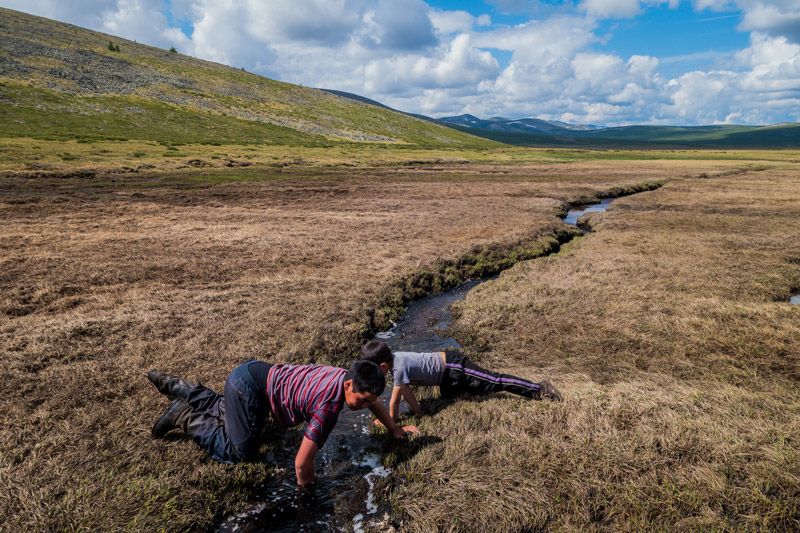 The diet of the Tsaatan people consists primarily of dairy products made from reindeer milk, reindeer meat, berries, and bread. Another welcome staple is fish, which the men catch with their bare hands. Here you can see the two sons of the family trying their luck at catching dinner. Photo: Jarryd Salem / NOMADasaurus 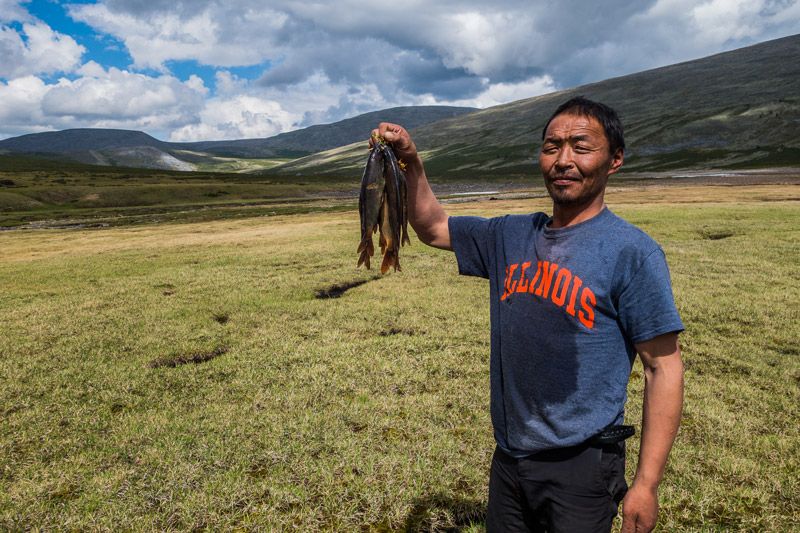 Teach a man to fish… 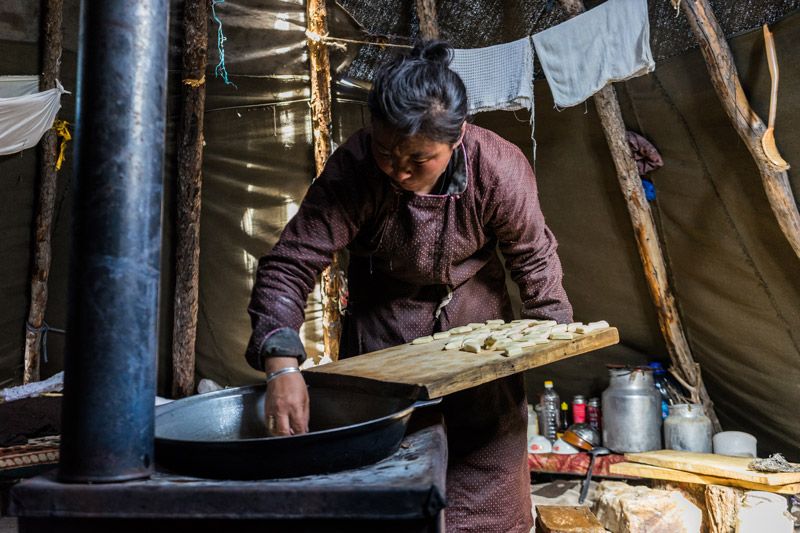 The people here are always busy. The women are constantly cooking and caring for the children, or running around with the reindeer. Here Amgaa is making fresh reindeer cheese and butter over a wood fire stove. With only one stove for cooking and providing heat, this is in constant use. Photo: Alesha Bradford / NOMADasaurus 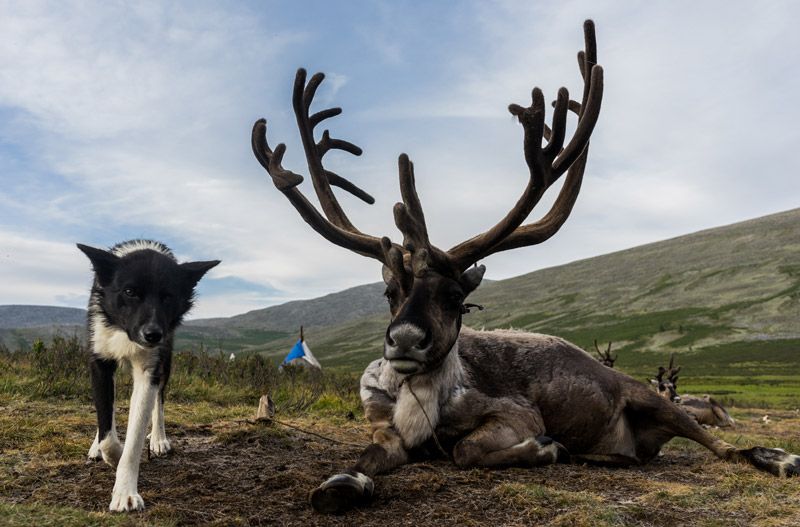 Dog and reindeer coexist in harmony up in the taiga. Photo: Alesha Bradford / NOMADasaurus 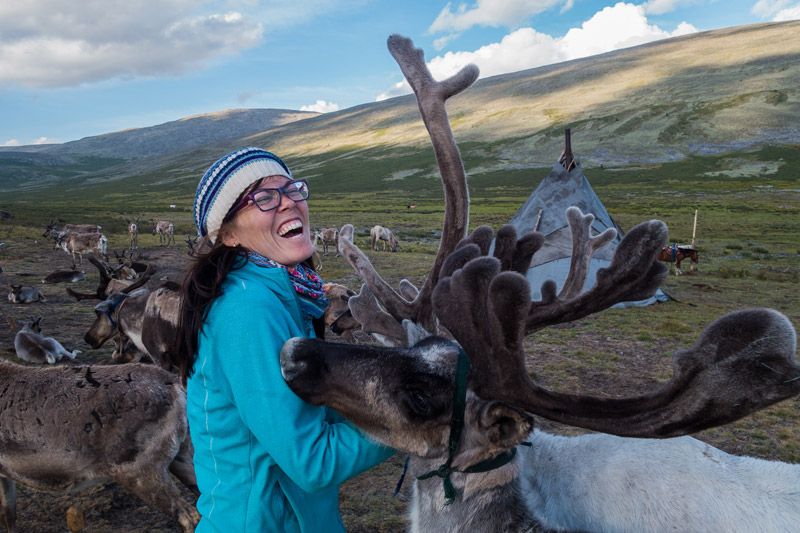 In the evenings the reindeer come trotting back to their home like clockwork. The family then collects the reindeer and ties them to stakes in the ground for the night. We were put to work by the kids, and were happy to help. The reindeer were not shy, and would nuzzle us with their furry antlers while licking us all over. Lesh lost it laughing as this one kept nibbling on her arm. Photo: Jarryd Salem / NOMADasaurus 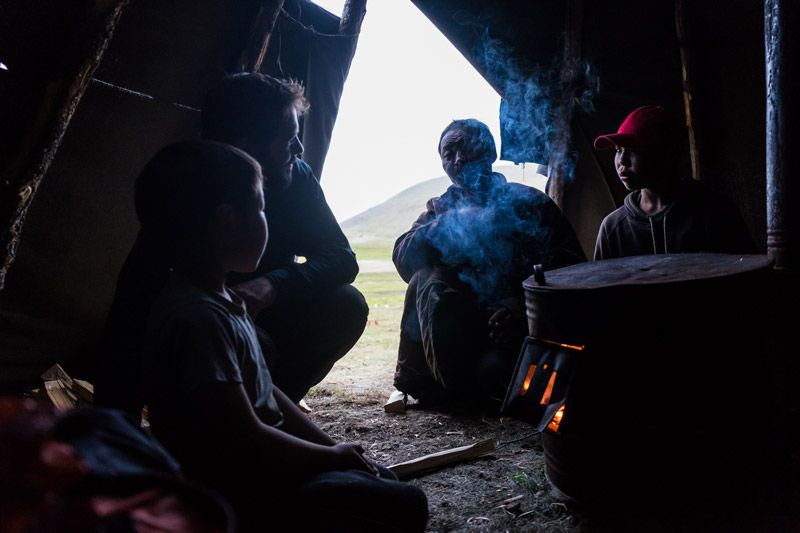 Meeting of the men

Just before the sun set, Magsar and the boys would come into our ortz and light a fire for us. The nights were incredibly cold up in the taiga, and Magsar ensured we had enough wood to keep us going through most of the night. Once the fire was lit we would always sit and joke around, despite us not being able to speak to the same language. Photo: Alesha Bradford / NOMADasaurus 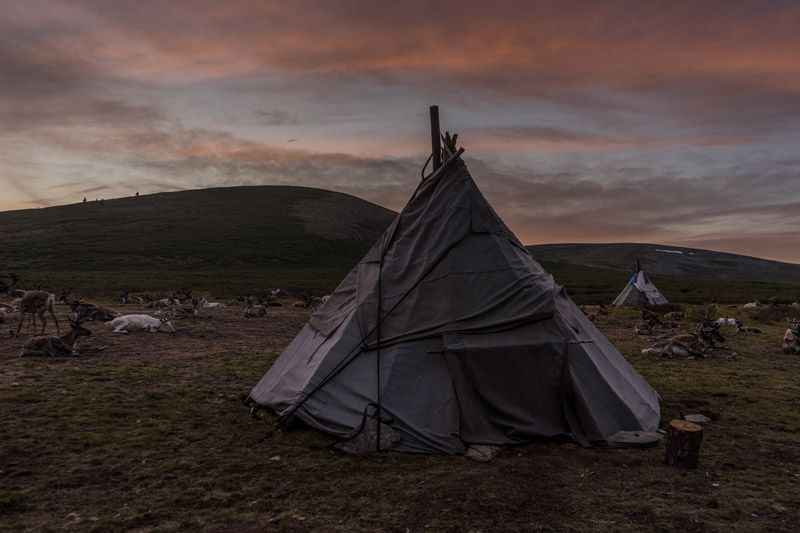 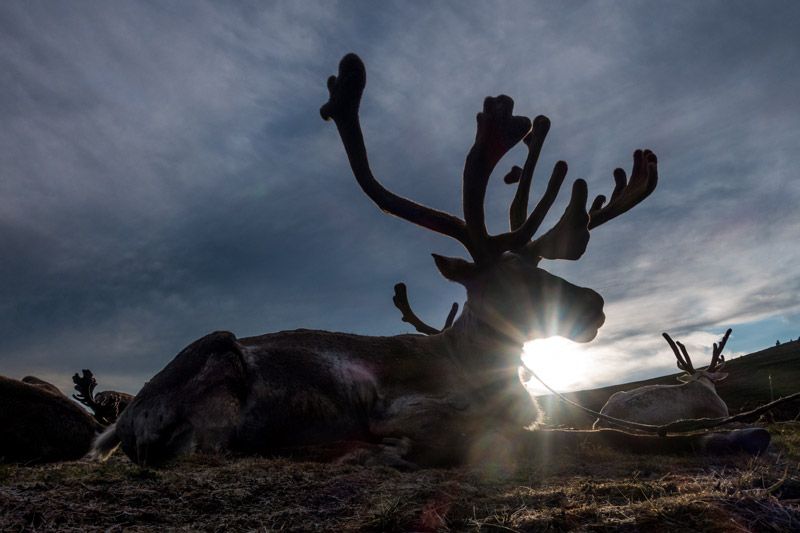 Stars of the taiga 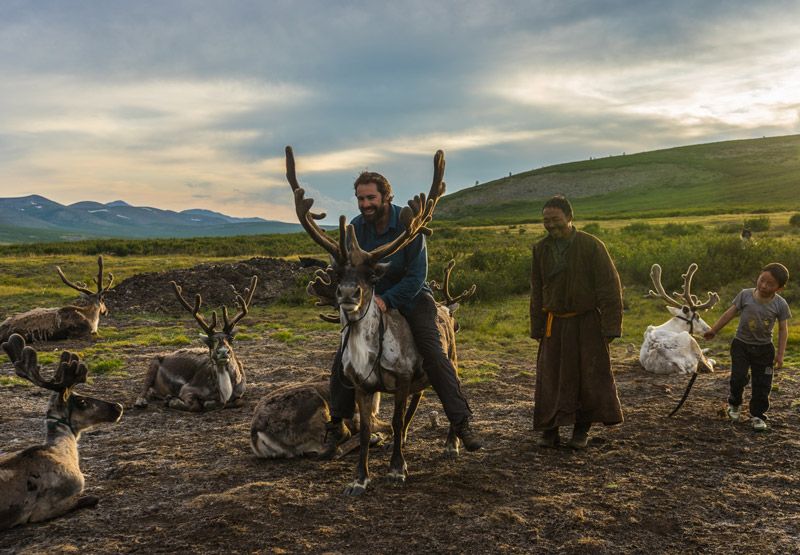 Racing to the finish line

On our last night all the reindeer were tied up and everyone was getting ready for bed. Magsar then walked up to his largest and strongest reindeer and untied it. I said to him, “Wow Magsar, that one is big”, and he simply smiled. He slapped it on the back, looked at me and motioned to get on. Grabbing the rope I swung my legs over and Magsar gave the reindeer a slap on the butt. As it galloped off with me bouncing on top I could hear Magsar laughing hysterically. A moment I will never forget. Photo: Alesha Bradford / NOMADasaurus 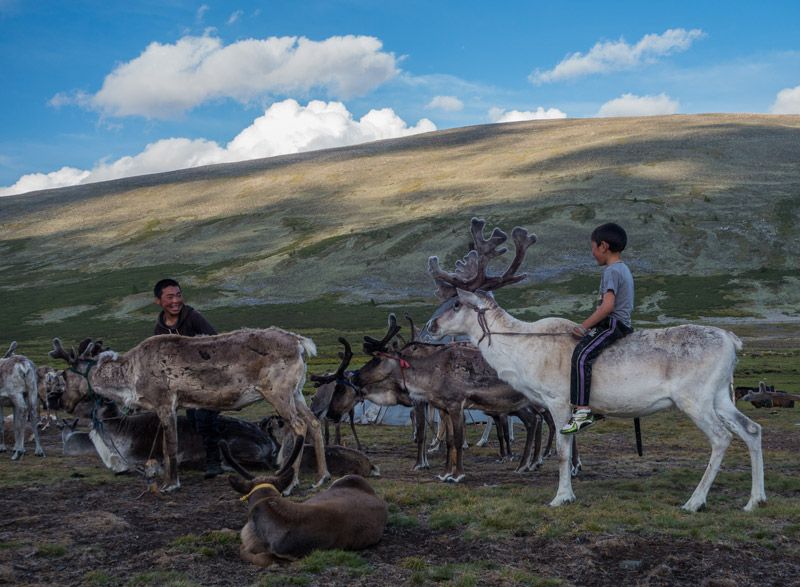 While riding a reindeer was a novelty for me, it is standard practice for the Tsaatan people. Photo: Alesha Bradford / NOMADasaurus 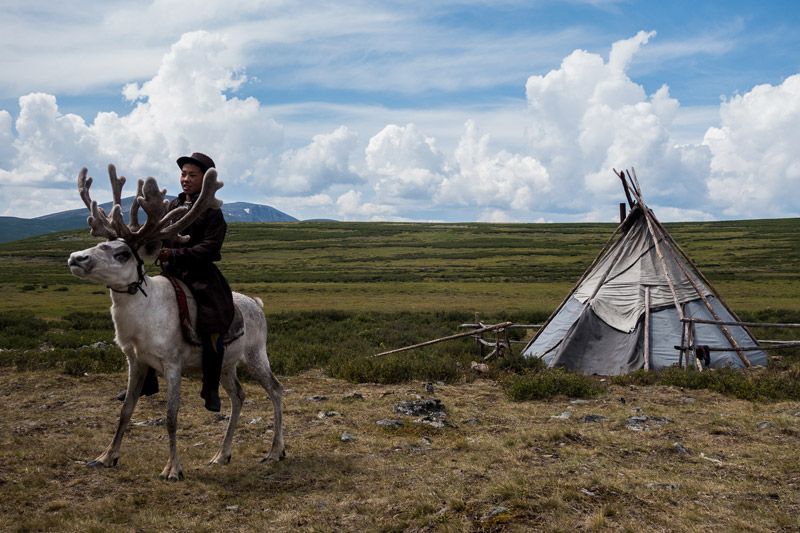 Ride for a reason

A young boy from another camp that we visited, happily posed for shots. His clothes and hat were his everyday wear. Photo: Alesha Bradford / NOMADasaurus 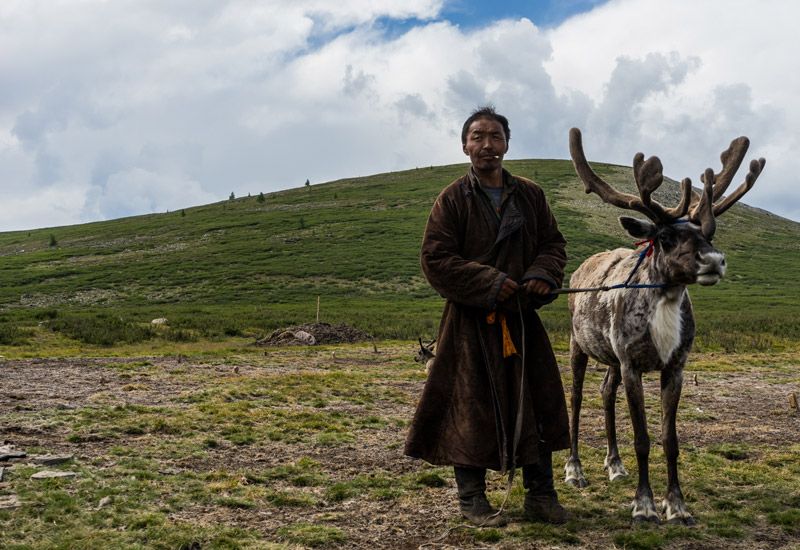 Master of his domain 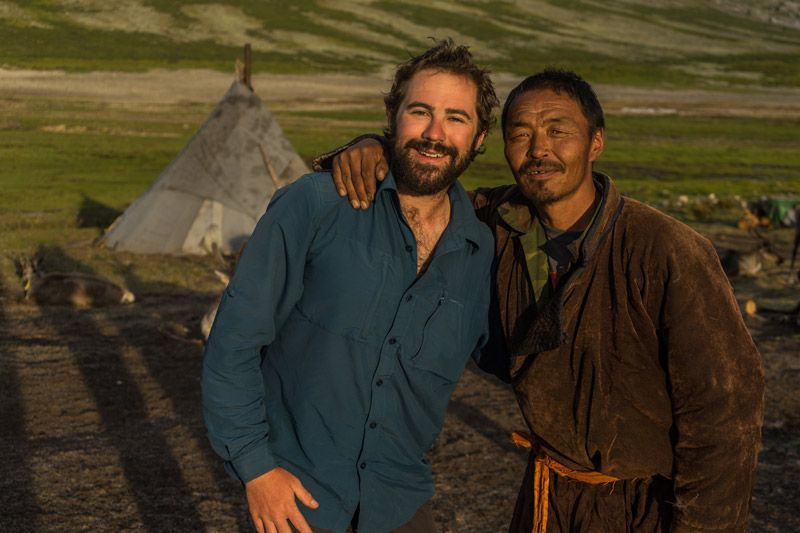 On our last day Magsar and I were chatting. He said in broken English, “Next year, come back.” When I told him that we could not, he nodded. “Okay, two years come back. With baby.” Photo: Alesha Bradford / NOMADasaurus

Tagged
Galleries Mongolia
What did you think of this story?
Meh
Good
Awesome

How’d you get that shot: Mongolian Contortionist

A 9-step guide to becoming Mongolian

Nobody’s River: Descending one of the world’s last free-flowing rivers

These photos of a lost Mongolian tribe are incredible

6 dating tips from around the world

This is how climate change transformed Mongolia

I was among the first Westerners to document the Mongolian Taiga. What I found was amazing