SINCE THE 2012 LAUNCH OF MY PODCAST, The One Way Ticket Show, I’ve interviewed some of today’s most exciting photographers, including Wyatt Gallery. Gallery is the recipient of a Fulbright Fellowship, the PDN 30, the PDN Rising Stars, and 25 Under 25 Up-and-Coming American Photographers by Duke University. His photographs are in numerous public and private collections. Gallery’s first book: “Tent Life: Haiti” sold out of its first edition. That was followed by “#SANDY” which was selected for “Best Photo Books of 2014” by American Photo magazine. 100% of royalties from both books were donated to support rebuilding efforts.

In my recent interview with Gallery (yes, that’s really his last name!) I sought tips for shooting iconic destinations to make them look fresh, ahead of the summer travel season.

Here are his 5 pointers: 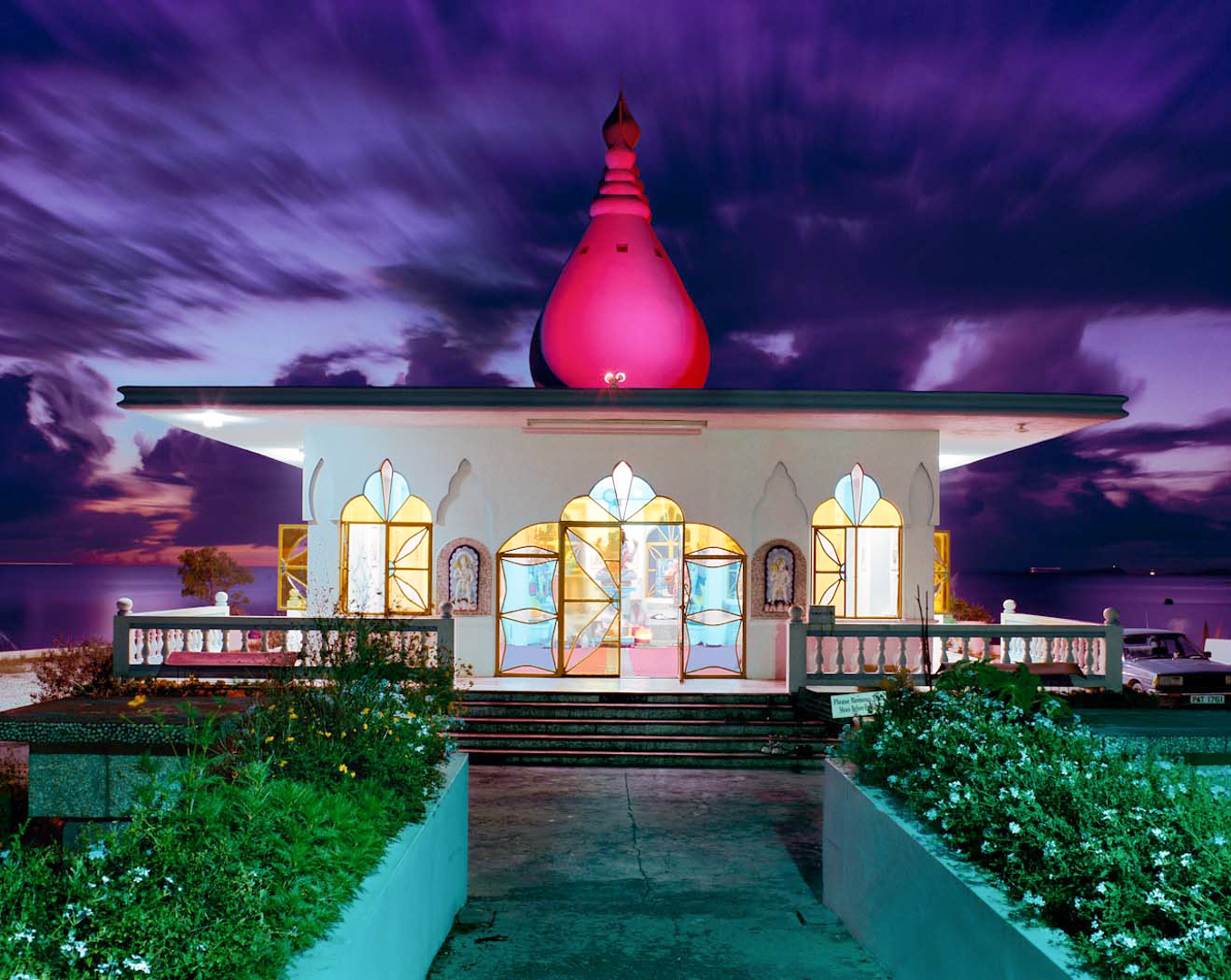 Photo: I made this photo with my Pentax 6×7 camera and a shift lens on a tripod using Kodak 160ASA film. Film is much less light sensitive than digital which means the dusk exposure took 15 minutes to expose at F11. During the long exposure the clouds were constantly moving directly behind the Hindu Temple. Combined with the multiple lights sources that cannot be recorded as neutral white light on one exposure, the results are a very colorful surreal photograph with great motion in the sky.

“I’m a big believer in daily mediation and I feel that that puts me in a zone that attracts the deeper photographs [and] that I will end up in these places at the right time of day with the right light. So I feel that that (mediation) is key to getting an experience that is not just the surface level tourist experience.”

2. Keep your camera in its case 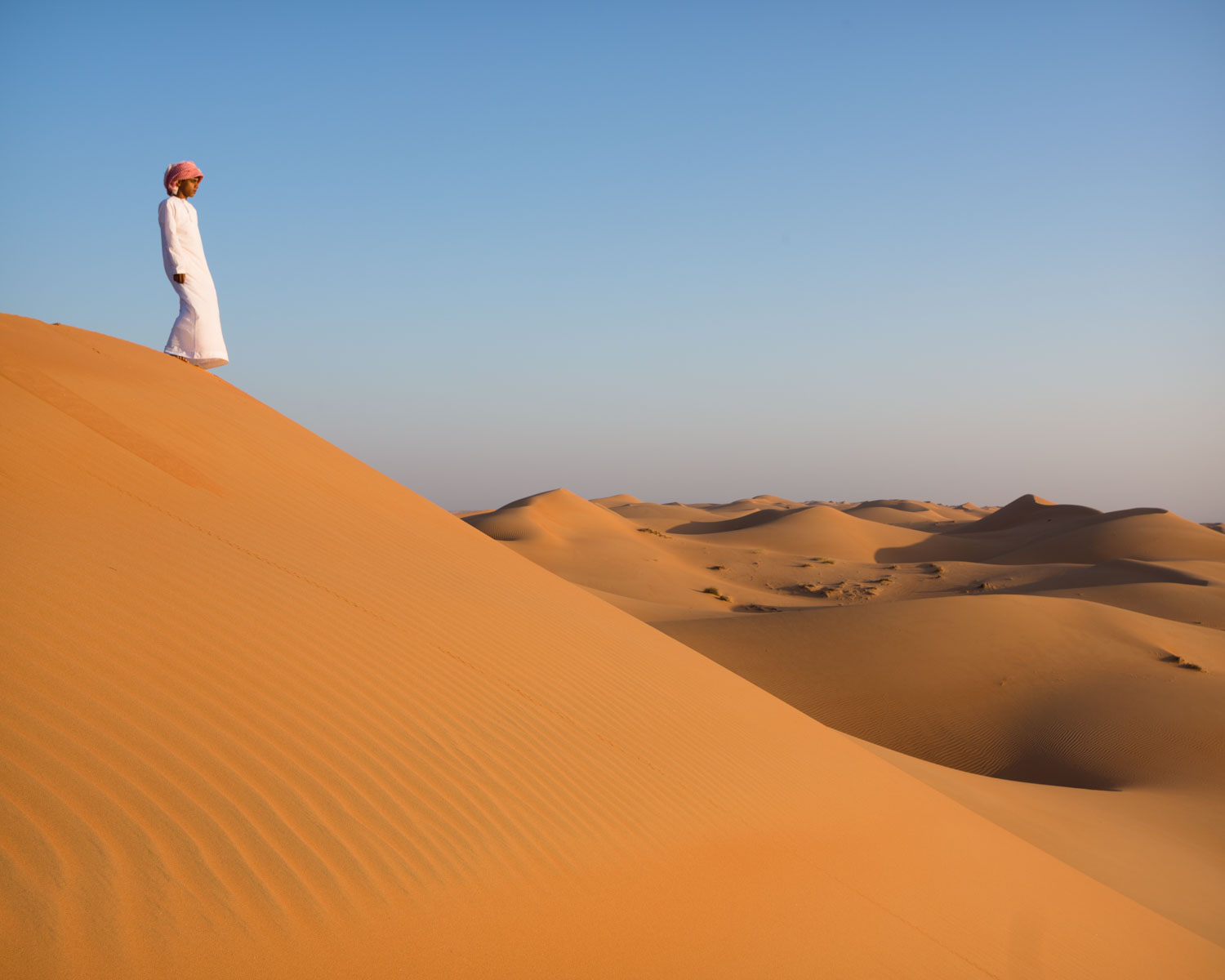 Photo: As the sun began to rise, I felt so overwhelmed by the abundance of beauty and different possibilities of photographs. I hurried across the ridge of a dune to capture a direct view of the sun rising, knowing I only had a limited amount of time before I lost the soft morning light and the sun was too strong. While taking that photograph, I looked to my left slightly behind me to see Obaida’s son was awake and had joined me on the top of a sand dune to view the rising of the sun. I quickly composed this image before he walked off.

“Don’t take any pictures! Yes, that’s right, I said it. Don’t take the first picture you see! Sit there for a little while. Absorb the scene. Absorb the environment. Be there. Experience there. And then feel what you’re drawn to with the camera. Just because it’s digital and we can take thousands of photos [don’t] go pressing the shutter button non-stop, and shooting everything. Take a moment. Feel it out and really feel what you’re drawn to.”

3. Rise before the roosters 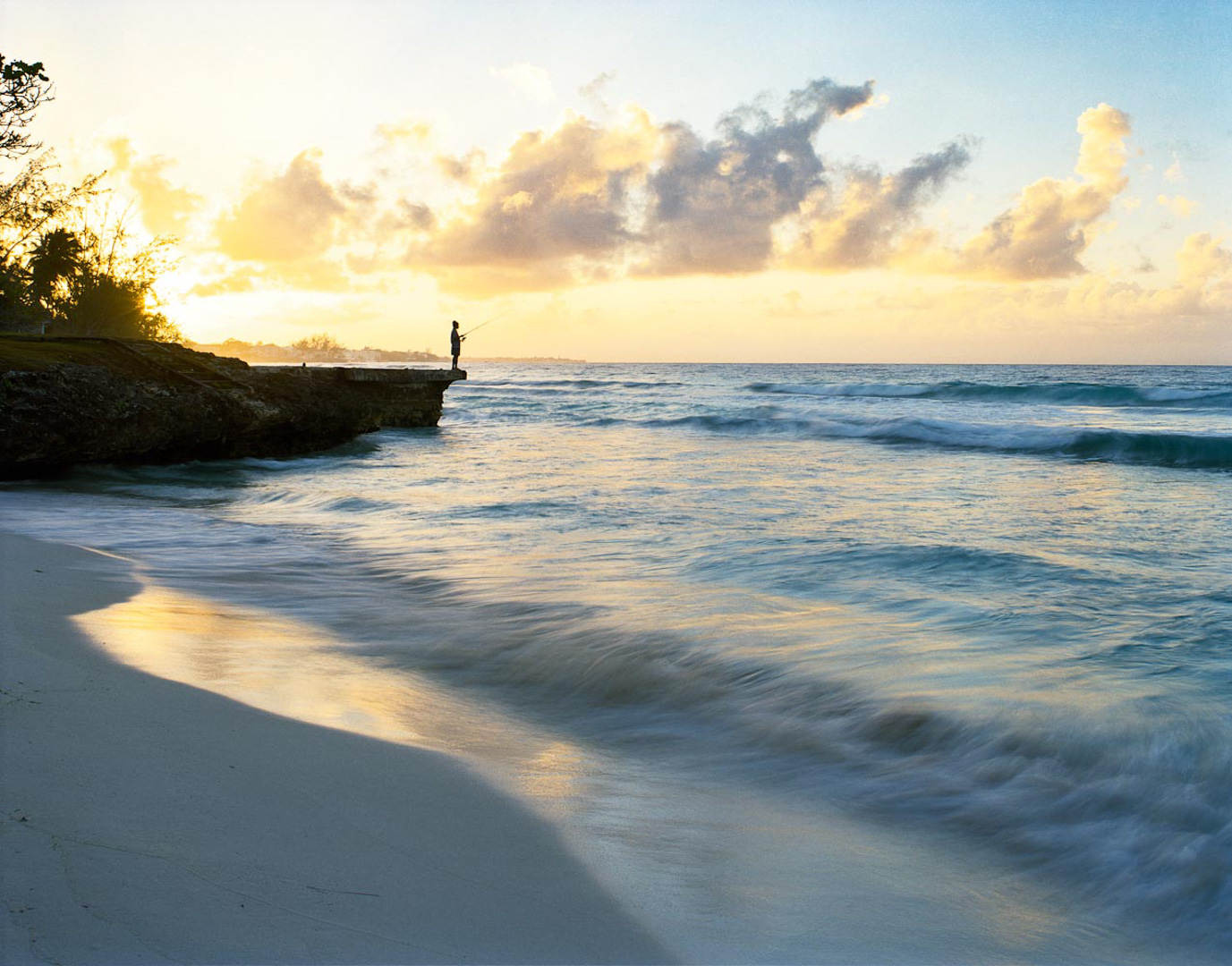 Photo: On this day I walked along the waterfront hoping to catch some soft morning light hitting an old building. Before I got to the building, I noticed the sun begin to warm up the sky with color and then the silhouette of a fisherman slowly walked out to the end of the little overhang jutting into the sea. It pays to get up before sunrise and move slowly, as well as use a tripod to create movement in water with the use of long exposures.

“Wake up really early in the morning, before the sun rises and get outside for when the sun is rising and get the beautiful, colorful light that’s going to come up in that morning miracle hour. And do the same thing in the afternoon. I try to only photograph inside in the middle of the day, and then I wait to do the outside shots.” 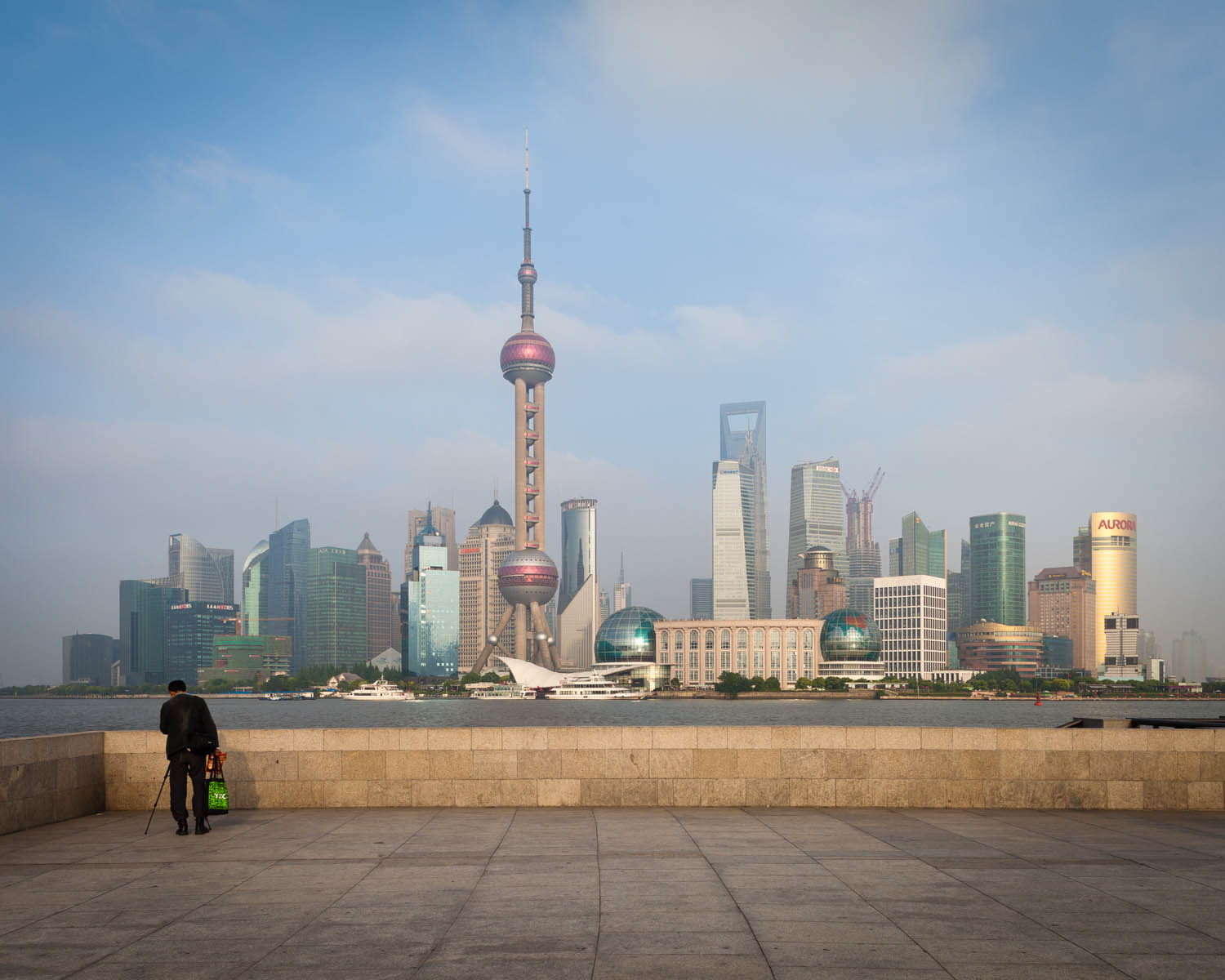 Photo: When I finally arrived at this stunning view oF Shanghai, I wanted to get a clear unobstructed view of thE skyline but there were so many people around. Instead, I chose to wait patiently until there weren’t a group of people in the view. But then this photographer set up to take the same angle and it just felt like that was THE shot I was actually waiting for. I love how he shows the scale of the towering skyline.

“I’ll see a scene that I like and I’ll sit there and wait and wait until the right moment, the right light, the right person walks by, whatever it is. You have to take your time. People have to stop rushing thru spaces.” 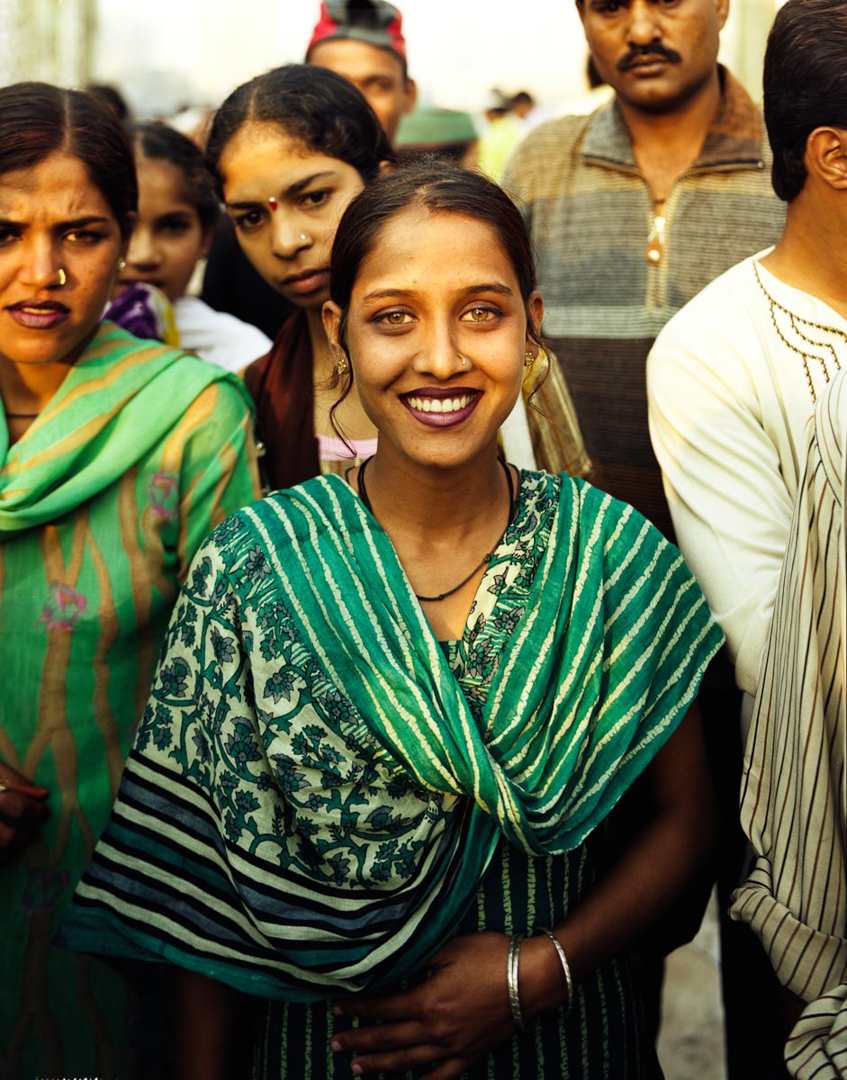 Photo: While traveling through India with my 4×5 view camera, I found that I really stood out and could not disappear into the crowds. So I realized I could take advantage of this to get some portraits, but it would require me being comfortable with being uncomfortable.

“Get off your phone! Everyone’s walking around with their head down, looking on their phone. You’re in a foreign country. Get rid of the phone. Don’t even use GPS. Ask people for directions. Interact with people. Expose yourself. Put yourself out there so that you have to talk to other people. And that is going to generate an amazing trip [and amazing photos].” As a photographer, I had to chime in with one tip myself:

“Someone once told me that if you don’t like what you’re going to shoot, turn around and take the shot that’s behind you!”