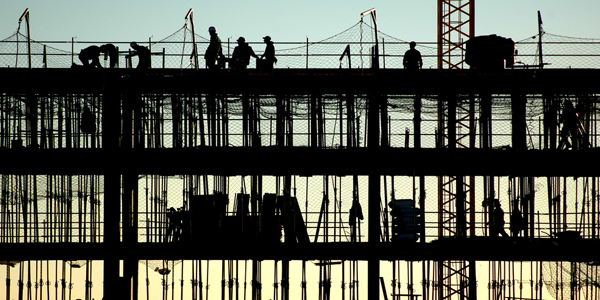 “Main Street America” is nothing more than a useful talking point for the political season.

Within a week of each other, Senators Barack Obama and John McCain swooped into the quiet Wisconsin town of La Crosse. Both presidential candidates seem bent upon taking their message to “Main Street” and working for “Joe”—whether the “six pack”, “plumber”, or “Schmoe” variety.

La Crosse is a swing town in a swing county in a swing state. None of the politics here are cut-and-dry. The 2004 election results showed only 53.38% of the populace of La Crosse County voting in favor of Kerry—neighboring Monroe County gave 53.06% to Bush. Wisconsin’s ten electoral votes would ultimately fall to Kerry by a margin of less than 1%.

It certainly doesn’t help that this relatively small city of 58,000 gets injected with over 18,000 students reporting to class at three different post-secondary institutions; meanwhile in the public schools, “Rifle Deer Hunting” is considered an excusable absence.

The initial impression is that capturing these hearts and minds is an uphill battle in both directions. 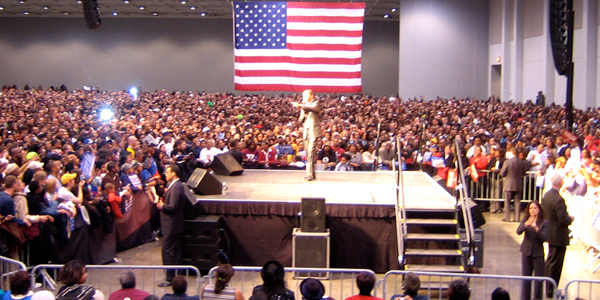 A Line Drawn in the Topsoil

The journey to either rally is itself a metaphor in the great divide. Amongst the hills and coulees, cows and horses graze alongside signs of ardent support for a Republican President. Some couldn’t even wait for a proper sign from the Republican Party headquarters—“McCain – Palin” is stenciled onto a blue-painted piece of plywood.

In the smaller outlying cities, the waters are muddier. In the quiet town of West Salem, the lawn signs alternate with almost perfect one-to-one regularity.

By the time you reach the peoples Co-Op in downtown La Crosse, the Dodge Rams have turned to Subaru Outbacks, the bucolic has turned modern, and the politics seem to have taken a decidedly sharp turn left.

And this is only 20 miles. One can only imagine how many times the landscape changes in the 200 miles from La Crosse to Milwaukee.

I asked the Chairs of the local Democrat and Republican parties what was important to the area voter and how each candidate addressed those issues in their respective rallies. The Republican Party Chairman Tom Lynch was the only one to attempt an answer.

“McCain addressed the National Security issues and the Energy Independence issues,” says Lynch, “Obama failed to assure the rural voter on either issue.”

It’s difficult to say whether such an assessment is a careful statistical analysis, an educated guess, or simple partisan rhetoric. It’s even harder to get a clean answer from a very politically guarded local populace. 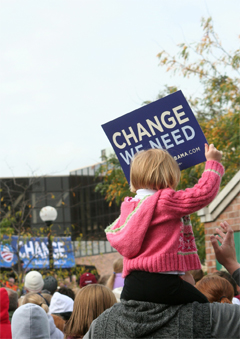 The local press doesn’t help. The comment section after the articles that announcing the candidates’ arrivals in the La Crosse Tribune reads like a truck stop bathroom wall gone political.

“You won’t be able to buy a gun if Obama gets into office!” says a man identifying himself only as “GoodListener.”

A man calling himself “PrivateSectorDoesItBetter” quotes revelations 1:8, after accusing democrats of being inflexible in their destructive views of “…their messiah, Obama.”

The Sparta Herald, the newspaper of a nearby town of over 8,000, recently featured two heated letters to the editor regarding Obama and his stance on gun control. On the evening news, a local political science professor suggested that Obama failed to touch upon farm subsidies, an issue of importance to Wisconsinites.

A block away from the site of both rallies is the actual road labeled “Main Street” in La Crosse. In addition to the Post office, the street is home to an upscale fashion boutique, the 6-story U.S. Bank building, the headquarters of the local radio station, a Japanese steak house, and a gay bar; as eclectic a mix as any you’ll find on, say, Wall Street.

It’s certainly not the image of gun-toting farmers that is often conjured when we think of the Midwest.

I’m hoping that by attending these rallies and listening to how the candidates attempt to make their case to the public that I can gain some kind of insight into what the generalized “Main Street American” truly represents. 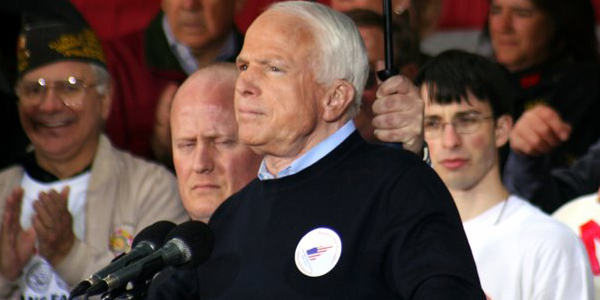 Photo by VictoryNH: Protect Our Primary.

Unfortunately, the McCain event was a sold out affair. His rally required that free tickets be picked up at the Republican Headquarters. By the time I got myself over there, less than two days after the announcement, they were gone.

A volunteer offers me some Republican wit for the road, “You got a shirt for the kid? One that says ‘I survived Roe v. Wade,’” He laughs, indicating towards my daughter—a planned pregnancy, thank you.

The event seemed to draw such a furor as to warrant the opening up of the city’s modest convention center. News reports showed crews shifting movable walls up to the very moment that John McCain himself took the stage in order to accommodate the immense response.

McCain, it seems, sees two sides to the problem. “They” are the bloated fat cats of Washington, tarrying about in their top hats and monocles purchased with the very blood of the American taxpayer.

“We” are ”Joe,” a American who simply wants to make enough in his small business to buy a hovel we can call our own—and maybe a hybrid Cadillac Escalade to go into the attached 3-car garage.

He goes on to accuse his opponent of being in bed with the mortgage companies, “…his most notable involvement with the housing issue was to be taking money from executives of Fannie Mae and Freddie Mac, the very people who were causing the problem.” 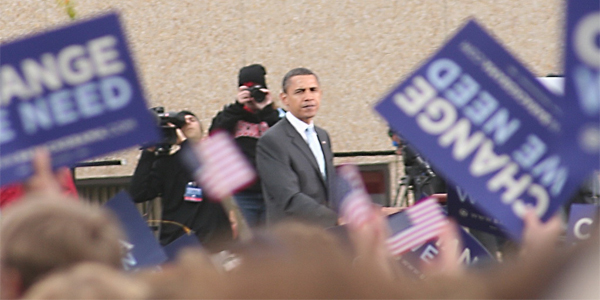 An unprecedented 15,000 Wisconsinites crammed into La Crosse’s historic downtown. The rally started with an eerie prayer and crescendos with increasingly charismatic speakers.

The final speaker is a local La Crosse woman who delineates point-by-point how Obama’s plans will help her family keep from defaulting on a second mortgage they took out on their small business—all this, while her child suffers from a rare kidney disease.

Obama took the stage, engaging in cute banter about the local Oktoberfest celebrations. After getting the local college students to scream violently, he then launches into a 20-minute tirade about his stance on the economic bailout package.

Obama is almost too articulate. He goes into great, intimate details about changes to the economic bailout legislation to largely quiet responses. His greatest cheers involve money—tax breaks to everyone who makes less than $250,000, tuition credits to college students, and even a taxpayer return on the investment of the bailout package. In fact, the only thing Obama fails to articulate with incredible detail is how these tax breaks, programs and handouts will be funded.

Obama articulates two sides to this fight. “They”, are the “Wall Streeters”, a malicious, money-hungry creature who all but break into our homes and steals our money for their nefarious get-rich-quick schemes. “We” are the poor innocent masses, who never once wanted anything more than to get crusts of bread and clean water for us and our children—and maybe a Samsung 42” Plasma.

“So let me be very clear: when I am President, financial institutions will do their part and pay their share, and American taxpayers will never again have to put their money on the line to pay for the greed and irresponsibility of Wall Street.”

While eating a sandwich at the local food co-op following the Obama rally, an older, stately looking woman notices my souvenir sign. “How do you think he did?” she asks, excitedly.

I hadn’t realized it was a performance. 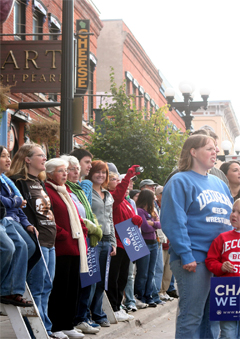 I had gotten my sign by asking a young, nervous looking Democratic party volunteer. “Uh, where are you standing?” he asks. I indicate towards my nosebleed section of concrete in the middle of Pearl Street.

“Uh, ok…but you have to hold the sign up real high,” He says as I take the cardboard “Obama – Biden” sign. I’m beginning to wonder why my support needs to be so visible. Is Mr. Obama really that self conscious or are these signs simply that expensive?

But it’s not just Obama. “Could I ask our veterans who are here to raise their hands so we can all recognize them and thank them for their service to our country?” McCain would ask—to rousing applause and vigorous hand-raising—at the end of his rally. I imagine his signs were also handed out with the same careful attention to visibility.

I stare at the Secret Service snipers perched atop the surrounding buildings and as my gaze moves downward, the answer becomes clearer. In two separate bleachers positioned in front and to the side of Obama, the best seats are reserved. Packed within those bleachers are countless glass eyes—still photographs, video cameras and vigorous note-takers.

Of course we have to our signs up high and raise our hands. How else would the two candidates be able to portray the love they have of the Main Street American?

I suddenly feel embarrassed for myself and my surrounding countrymen. We, along with people in small towns throughout Ohio, Michigan and other swings states, are the image of that “Main Street” American that’s plastered on the TV.

Here I thought we were all just curious to see what our potential new president had to say.

In the days following, I’m sitting in a bar deep in the rural country outside of the small town of Warrens with my brother-in-law. A young looking man wearing full Realtree™ hunting regalia approaches me. “Man, there ain’t nothin’ like bow huntin’, man,” he says, “it’s almost better’n smokin’ weed.”

He would finish by launching into a tirade about the area’s female population—and their disinclination to dating him.

What’s most important about these rallies is not what we can learn about the main street American, but about the political process for rural voters. We don’t need to travel many miles to have a politician tell us about the complex social issues affecting our neighbors. 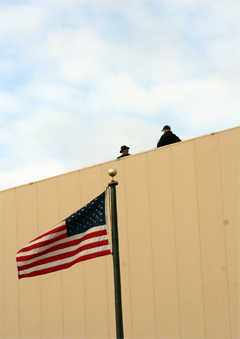 Our issues are like a political vinaigrette, mixing conservative views on abortion with liberal views on health care; beliefs that invading Iraq was a good idea, but that marijuana should be legalized; veterans who think the embargo on Cuba should be sustained, but that the government should further subsidize biofuels.

We’re everything from the jobless drunks who demand the impossible of the tax dollars, to money-obsessed go-getters who think fire fighting should be a pay-per-use service.

Individually our stances on federal politics are incapable of labels, but once we’re coagulated into that raucous mob, we are anything they want us to be. I frankly refuse to be a non-journalistic part of any rally until politicians stop talking to the cameras and start talking to me—a Main Street American.

Alas, Main Street is yet another catch phrase with enough ambiguity to both encompass our friends and alienate our enemies. Like “terrorism” or “patriotism”, our perception of small town America begins to coagulate us into to disparate, hate-filled groups. We become divided by our beliefs.

When the election is done, there will no longer be “Main Street Americans” here in La Crosse. From the ivory towers to the wide open farm fields, we’ll all go back to fending for ourselves, our political usefulness spent.

Our separate, unique voices will be too disparate to rally a united front when our new President doesn’t do what they promised. The same as it was for the last eight years and the eight years before that.

I don’t think we could ask for much more.