Winter road trips just don’t have the same allure. This probably has something to do with the abundance of road chain advisories and potential for black ice. But it’s probably also because the days are shorter, the nights are colder, and half the country is closed for the season.

That said, some parts of the country are best viewed from the road this time of year. Case in point: New Mexico, a land that’s especially enchanting under clear, cold skies with a light dusting of snow. Its desert-scapes can be experienced under pleasant temperatures, and summer crowds at the national parks and alien attractions are minimal. So follow along on this journey from Albuquerque to Santa Fe, White Sands, and all the oddities in between as we show you why New Mexico is the best spot for a winter road trip.

Experience the wide-open majesty of Albuquerque 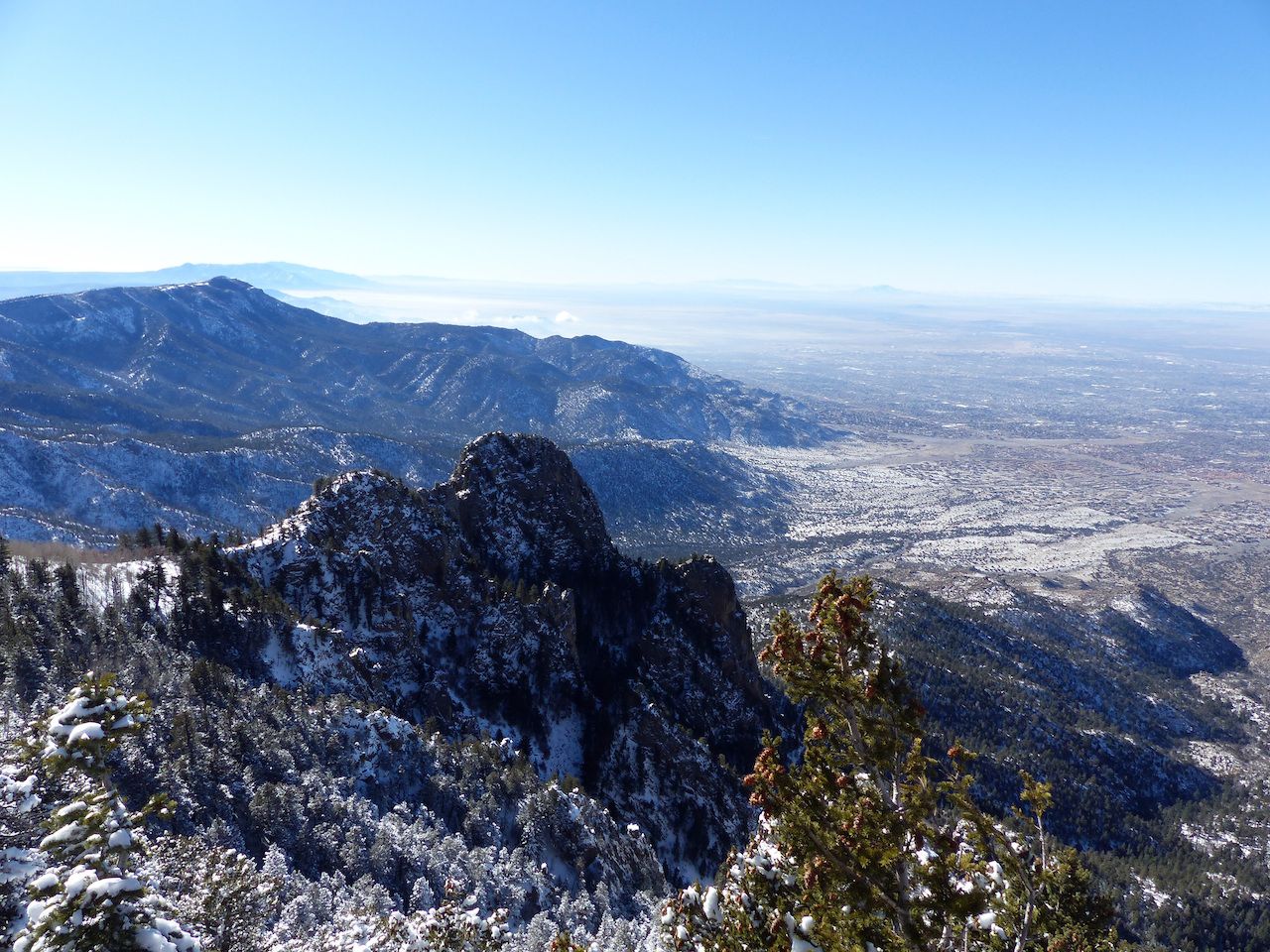 The easiest and most abundant flights will be into Albuquerque, so it’s the logical place to begin your adventure as a cold-weather road warrior. Though you might only know it as the place that birthed Walter White, this vast city of red rocks and vast skies is a fascinating place to start the trip.

There is, of course, the requisite Breaking Bad RV tour. But beyond that you’ll find the snowy desert to be especially scenic from the top of the Sandia Peak Tramway. The short cable-car ride to the top brings you to spectacular views over the city and the valley beyond. Or, since the weather is cooler, you can hike up to the top and treat the view as a reward.

Winter will make the red and green chile stews you’ll find all over Albuquerque especially cozy. They’re on menus citywide, but you’ll find the best at the Barelas Coffee House and Duran’s Central Station.

You’ll also want to make a stop at the Indian Pueblo Cultural Center, where you can stuff yourself with a Pueblo taco then learn the history of the native peoples of the land you’re about to explore.

Rest your head in Albuquerque at the Painted Lady Bed & Brew, a fairly new boutique hotel in a restored 20th-century brothel, which eschews the staid bed-and-breakfast concept for craft local beers at the daily “hoppy hour” instead. 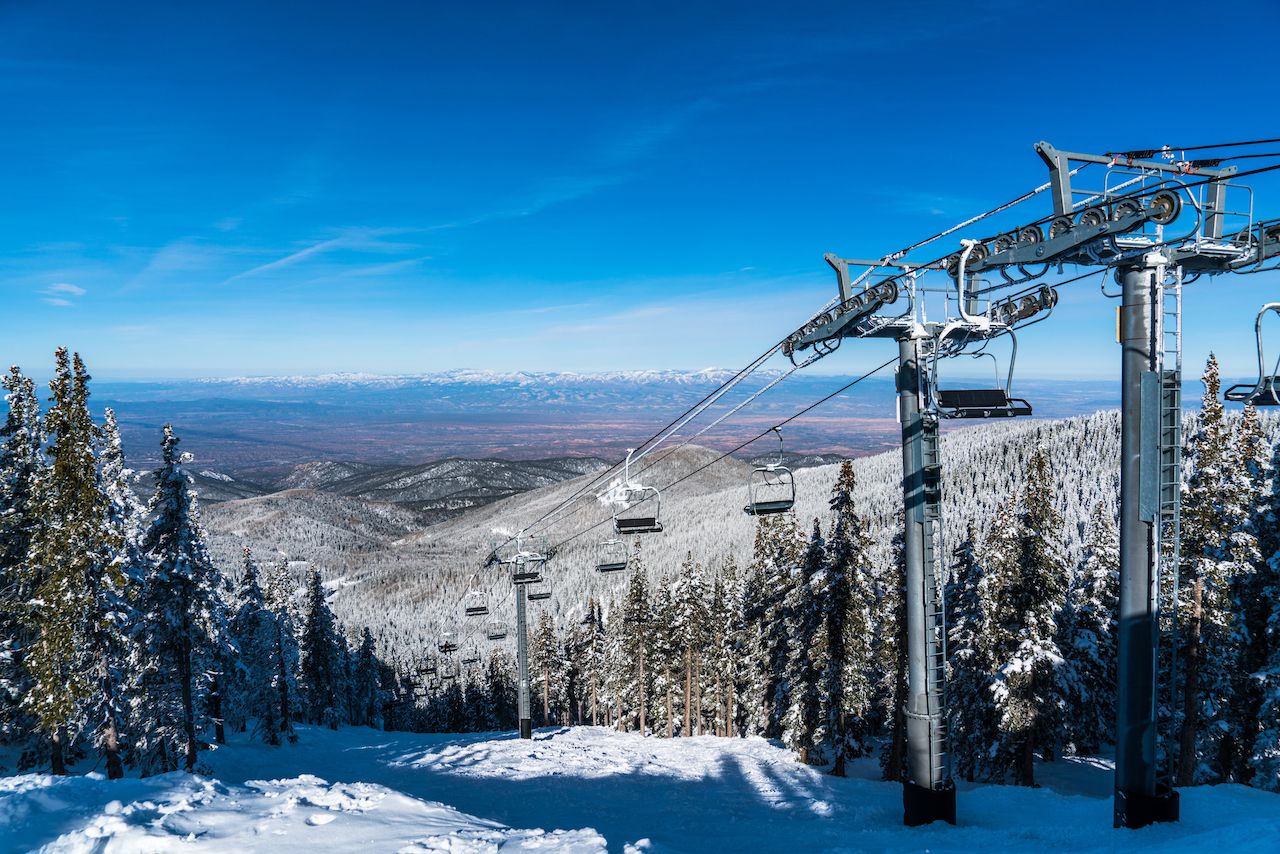 After exploring Albuquerque, head an hour and change north to Santa Fe and one of the best daytime ski resorts in the Southwest at Ski Santa Fe. Lift tickets here are still under $100, and there’s terrain challenging enough for a solid day on the mountain. Don’t let the views back over the red rocks covered in white snow distract you on the slopes, but do make sure to stop and appreciate the setting.

After your day on the slopes, let your muscles decompress at the Ten Thousand Waves Onsen Spa, where a Japanese garden full of heated pools feels especially calming on cold winter nights.

In town, you’ll find yourself in an adobe winter wonderland as the second-oldest city in America is full of old mud-and-straw structures that date back centuries. You can tour the oldest house in America, grab margaritas at the iconic La Fonda on the Plaza Hotel, and learn the history of the state at the Palace of the Governors.

In addition to being one of the best food cities in America, Santa Fe is also home to the trippy Meow Wolf museum. Set in an old bowling alley, it’s an interactive art museum with 70 rooms of blacklights, performance artists, acrobats, and bright neon that’s unlike any other art space in the country.

See carvings from thousands of years ago 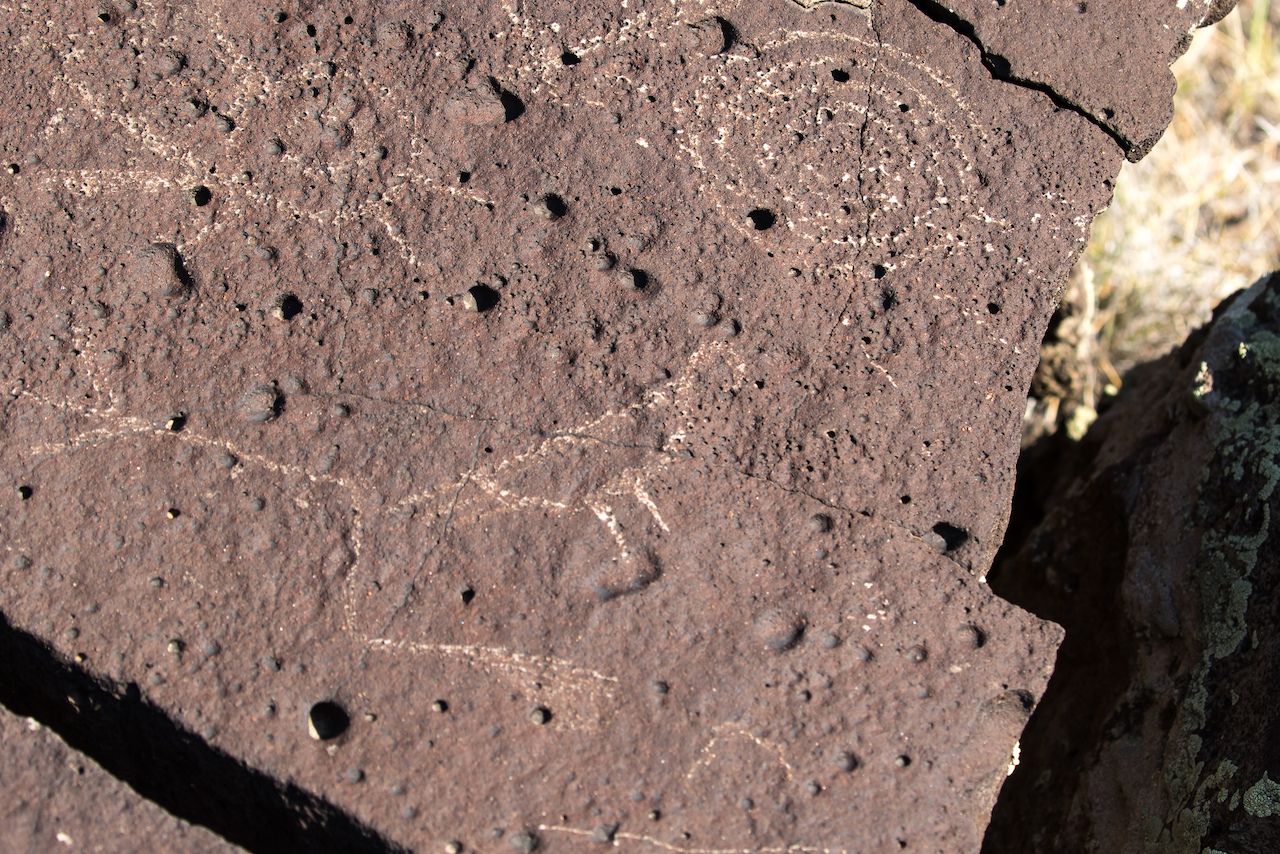 About half an hour southeast of Santa Fe you’ll find La Cieneguilla, a site with over 4,000 petroglyphs carved by early inhabitants of the area. You’ll start by the side of the Paseo Real, hiking up a dormant volcano to a series of cliffs. The 15-minute walk brings you to carvings that date back nearly 10,000 years, and though carvings and cave paintings in this region aren’t unusual, these ones come with a nice view out over the valley and mountains beyond.

Visit homes carved into the side of a mountain 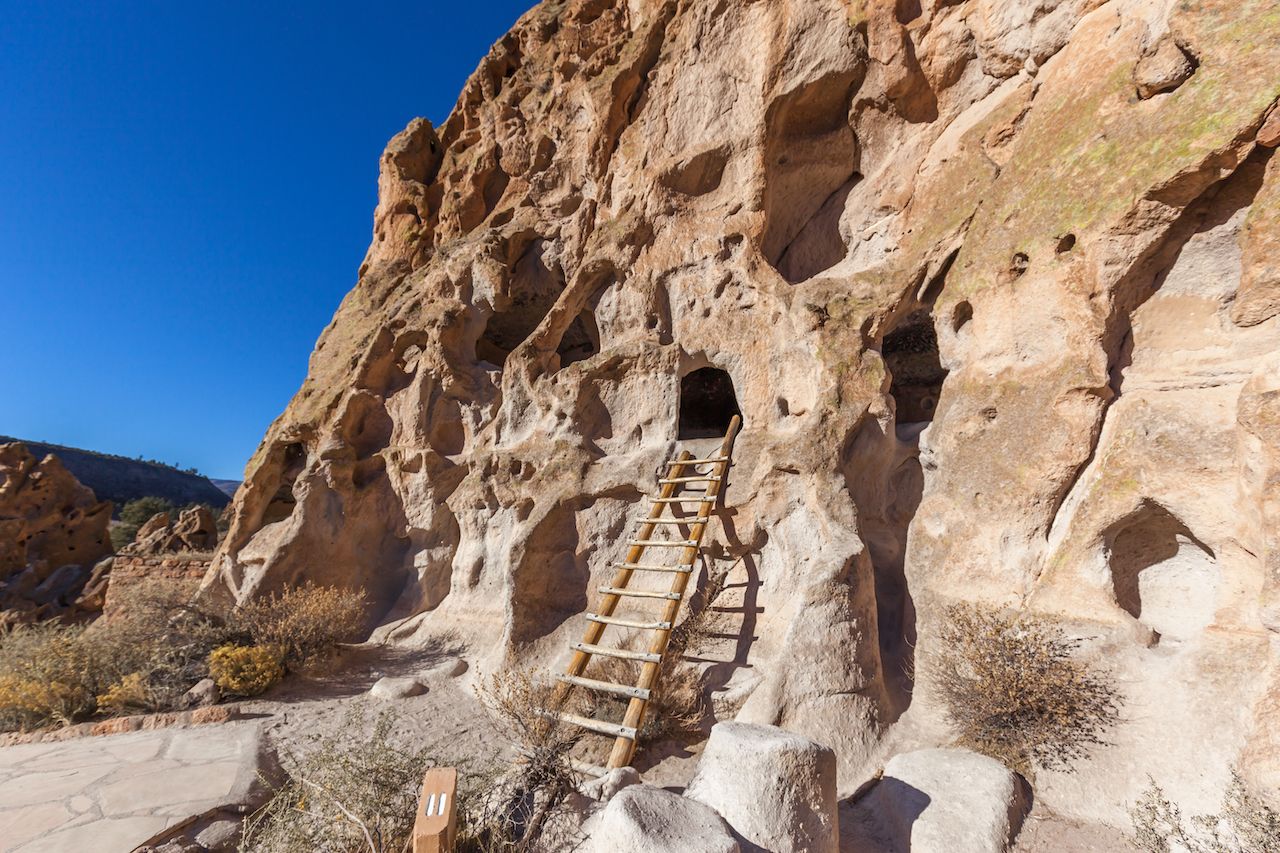 About an hour north of Santa Fe, you’ll find some of the most unusual dwellings in the world, carved into the porous volcanic rock at Bandelier National Monument. As the walls of this massive canyon were already poked with holes, the Pueblo people were able to expand them and carve their homes into the side. A 1.5-mile loop trail takes you past dozens of them — equipped with ladders for you to climb inside — and to the ruins of some underground homes from the same period.

Heal yourself in arsenic water 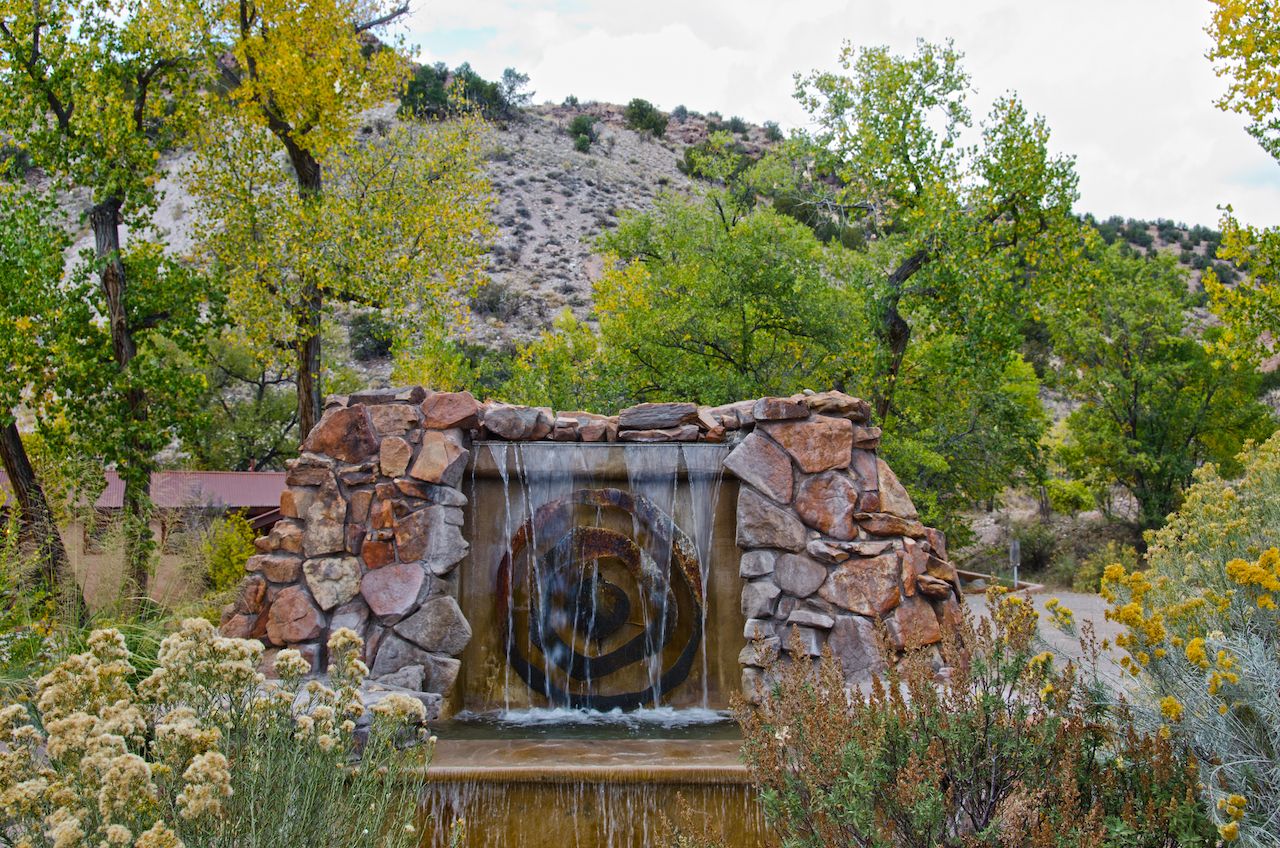 After you’ve sufficiently burnt out your legs exploring the national monuments, relax them yet again in an arsenic bath.

“Arsenic?” you ask. “You mean the same stuff used to kill like half the people in Agatha Christie books?”

Kinda. When not ingested on a trans-European train ride — and rather used as an element in natural hot springs — arsenic is said to have healing properties for arthritis and digestion. Judge for yourself at the Ojo Caliente natural hot springs, where you can also soak yourself in a lithia pool that’s believed to help with depression or cover yourself in mud and bake in the sun. You can also opt to swim into the enclosed soda pool, where a rock structure surrounds the bath, providing a sense of separation and serenity. If you feel like splurging, spend a night at the luxury hotel here to recharge for the big driving days ahead. 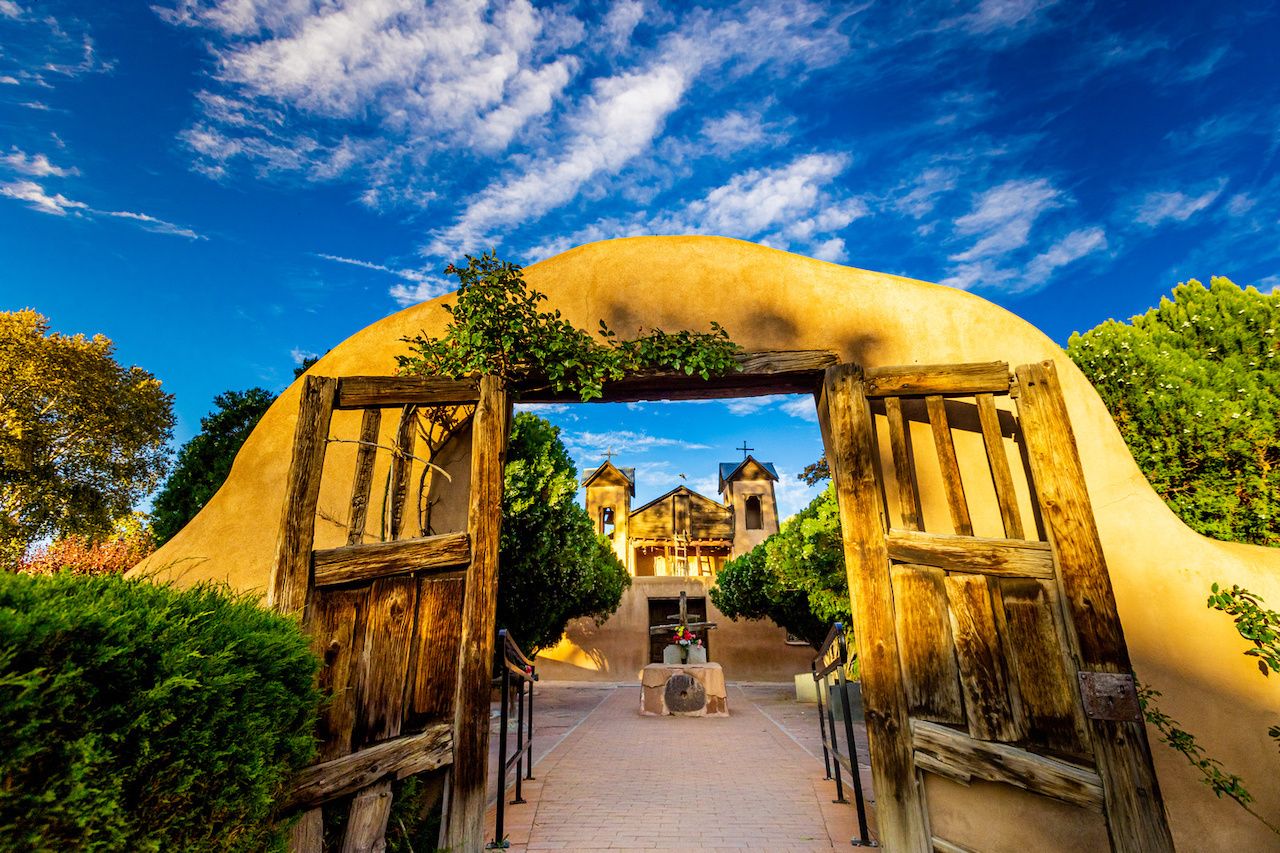 As you head out into the desert on US-285, you’ll pass through a little town called Española. Off the town’s main drag you’ll find a tree-lined street leading to a colorful, adobe family home, which houses what some argue is the best Mexican restaurant in the state at El Paragua. What started as a family-run taco stand in the 1950s has become a destination restaurant in the middle of the mountains, where you’ll definitely want to try the tacos and a cold margarita for the road.

Many of the people who stop at El Paragua are on their way to El Santuario de Chimayo, an early-19th-century church that sits on land rumored to have healing properties. The legend stems from a friar who claimed to see a glowing crucifix emanating from the river that runs nearby, and after touching it, he was able to heal the sick. Hundreds of thousands of people come here each year to scoop up some of the church’s dirt floor hoping to find those same healing properties. None of this has been proven, of course, but it hasn’t stopped the swell of visitors, which should be slightly less numerous in the winter.

Eat at an alien McDonald’s in Roswell 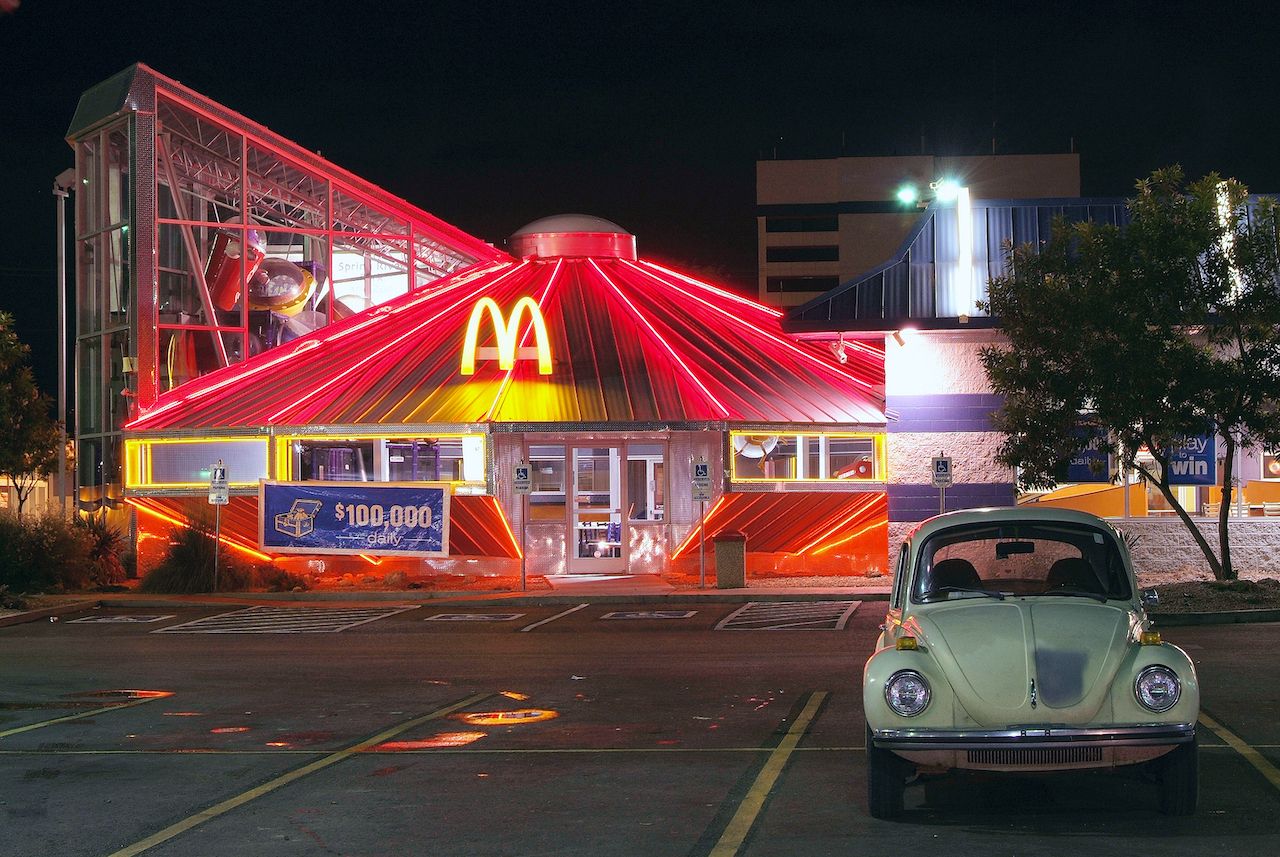 Descend back down the mountains and you’ll get your first big dose of New Mexico desert, rolling about three hours down I-25 and US-285 until you hit the alien theme town of Roswell. To avoid any confusion, it’s actually not anywhere near Area 51 (that’s in Nevada) but rather was the site of a famous UFO crash in 1947, first called a flying saucer then later deemed a “weather balloon” by the US military. Whatever it was, it’s spurred an entire alien industry in Roswell, including the International UFO Museum and Research Center, a UFO festival, and the world’s only McDonald’s shaped like a UFO.

Venture down into Carlsbad Caverns 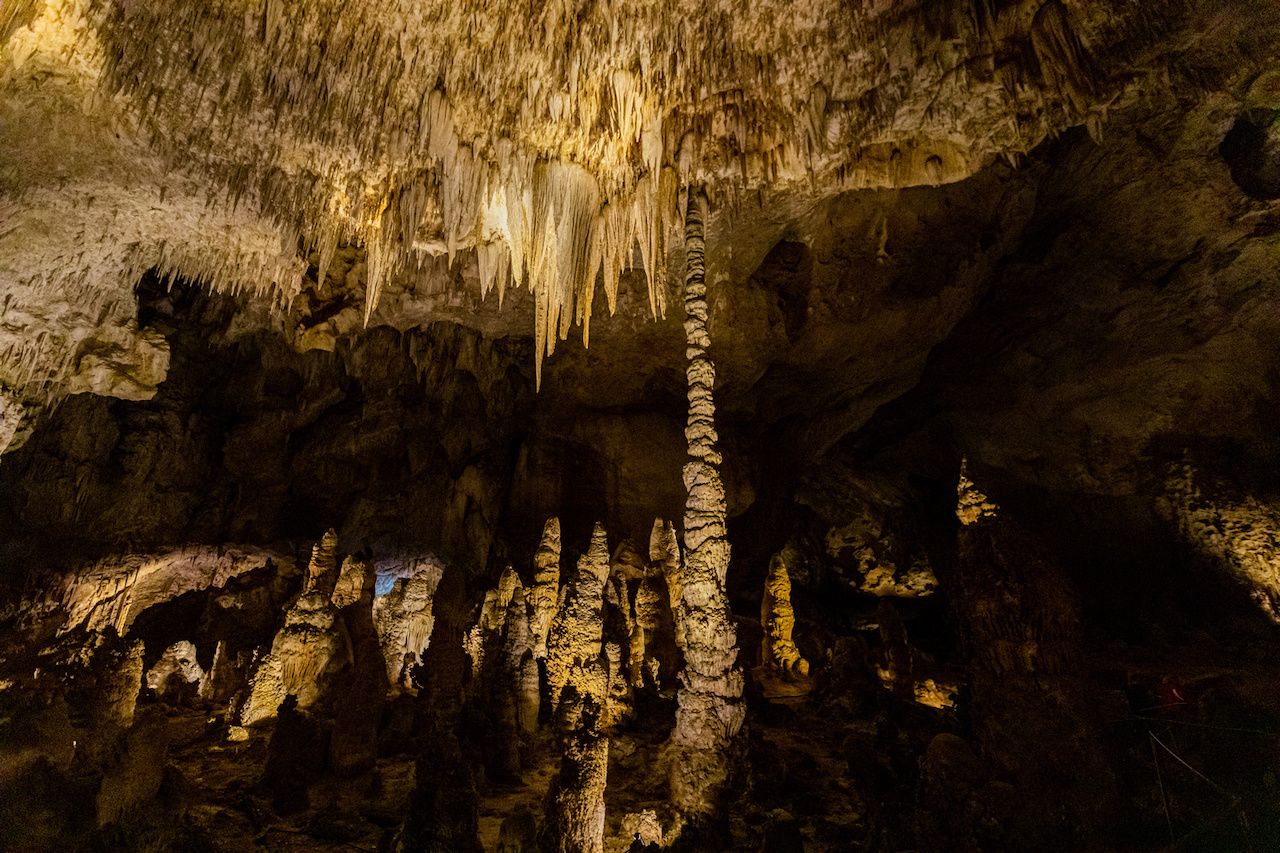 Leaving Roswell down US-285, the landscape turns from flat desert into miles of pecan orchards, then to colorful rock formations and rolling hills. A couple of hours through these petrified coral hills brings you to Carlsbad Caverns, carved out of that same coral 1,000 feet underground. You’ll drive to the top of a mountain with a panoramic view, where an elevator takes you nearly 80 stories down into the caverns. Or, if you’re up for a little exercise after a day in the car, you can hike 90 minutes down the long, dark staircase.

The Big Room should be relatively empty in the winter, and despite the cooler air outside, it stays a constant 55 degrees inside. Maybe a little cooler without busloads of people inside. The 4,000-foot by 625-foot room is the size of six football fields — if football fields had stalactites hanging from the ceilings. 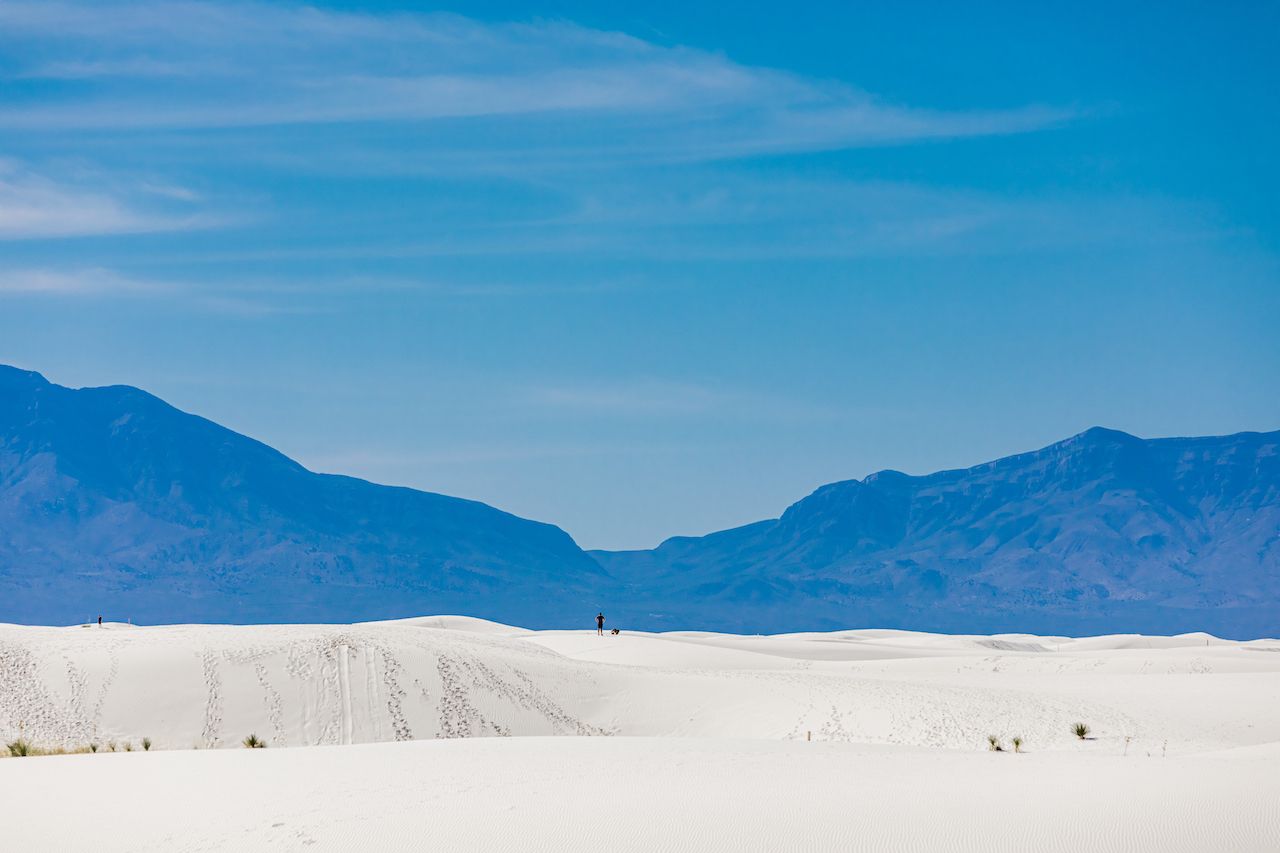 Climb through the mountains up US-285 to US-82 into the Mescalero Reservation, then descend into the surreal landscape of White Sands National Monument, the largest gypsum sand dunes in the world. Your pictures will likely confuse your friends as the endless sea of white looks more like snow than the stuff they make casts out of, but much like you can with snow, you can go sledding down the dunes or take a more salt-dune-appropriate horseback ride. Or just drive the eight-mile trail. Just make sure to get out before sunset — or right after. Wintertime can bring sub-freezing temperatures to the desert, so camping might not be in the cards. 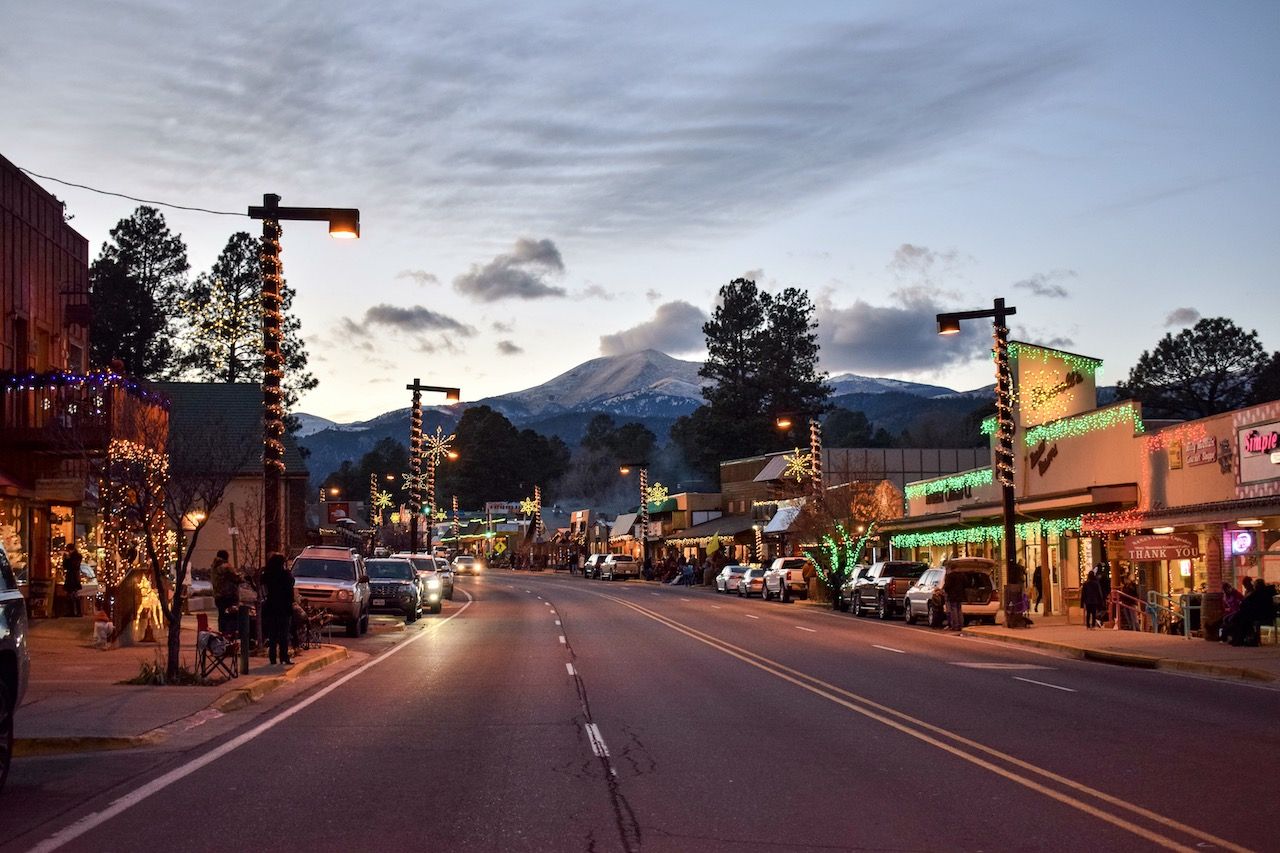 The drive from White Sands back to Albuquerque is about three and a half hours. Doable if you spend the night in the park but a long day if you’ve gone straight through from Carlsbad. Instead, take the scenic route back through the Sierra Blanca Mountains and spend the night in Ruidoso. This little mountain town is one of the coolest in America, and few people have heard of it. It’s home to North America’s southernmost ski resort if you want to get a few last runs in before heading home. Plus, loads of mountain hiking and welcoming restaurants to get a last taste of New Mexican cuisine.

After a night here, it’s back up north to Albuquerque and a flight home from the Sunport. Even though you’ve probably spent a week or so in America’s fourth-largest state, you’ll still have only seen a fraction of it. So while this itinerary will make for one hell of a road trip, it still leaves the door open for you to come back again.

The 9 most spectacular US hotels that go all out for Christmas
The worst travel photo cliches and how to avoid them
The optimal itinerary for a US national park road trip, mapped
The high risk of skiing off-piste inside European ski resorts
An overnight train is the best way to experience Canada’s winter wilderness