“Breaking Bad, they pretty much got this place right,” a local girl tells me as we’re sitting at the Apothecary Lounge atop the Albuquerque’s Hotel Parq Central.

The lounge is a swanky rooftop bar with sweeping views of the Albuquerque skyline and the Sandia Mountains, but the ambiance is a little like a regional airport bar. The menu is full of crafted spirits and muddled cocktails, but the lights are harsh and the stools could have come from a Steak ‘n Shake.

Despite fantastic drinks, the place is still a little rough around the edges. And it’s perfect for Albuquerque.

I wasn’t quite sure what the nose-ringed young lady next to me meant by “got this place right.” I hadn’t seen a single meth transaction since landing at the adobe-inspired Albuquerque International Sunport. But after a few days in town it made sense: Albuquerque is big, vast, and beautiful. But it’s still got grit, and sitting hundreds of miles from the nearest city, it’s full of people looking for that kind of isolation. Though Breaking Bad and, later, Better Call Saul made it famous, Albuquerque still has what drew producers here in the first place — character. And that character — the third most important on the show — is worth discovering past the requisite RV tour. 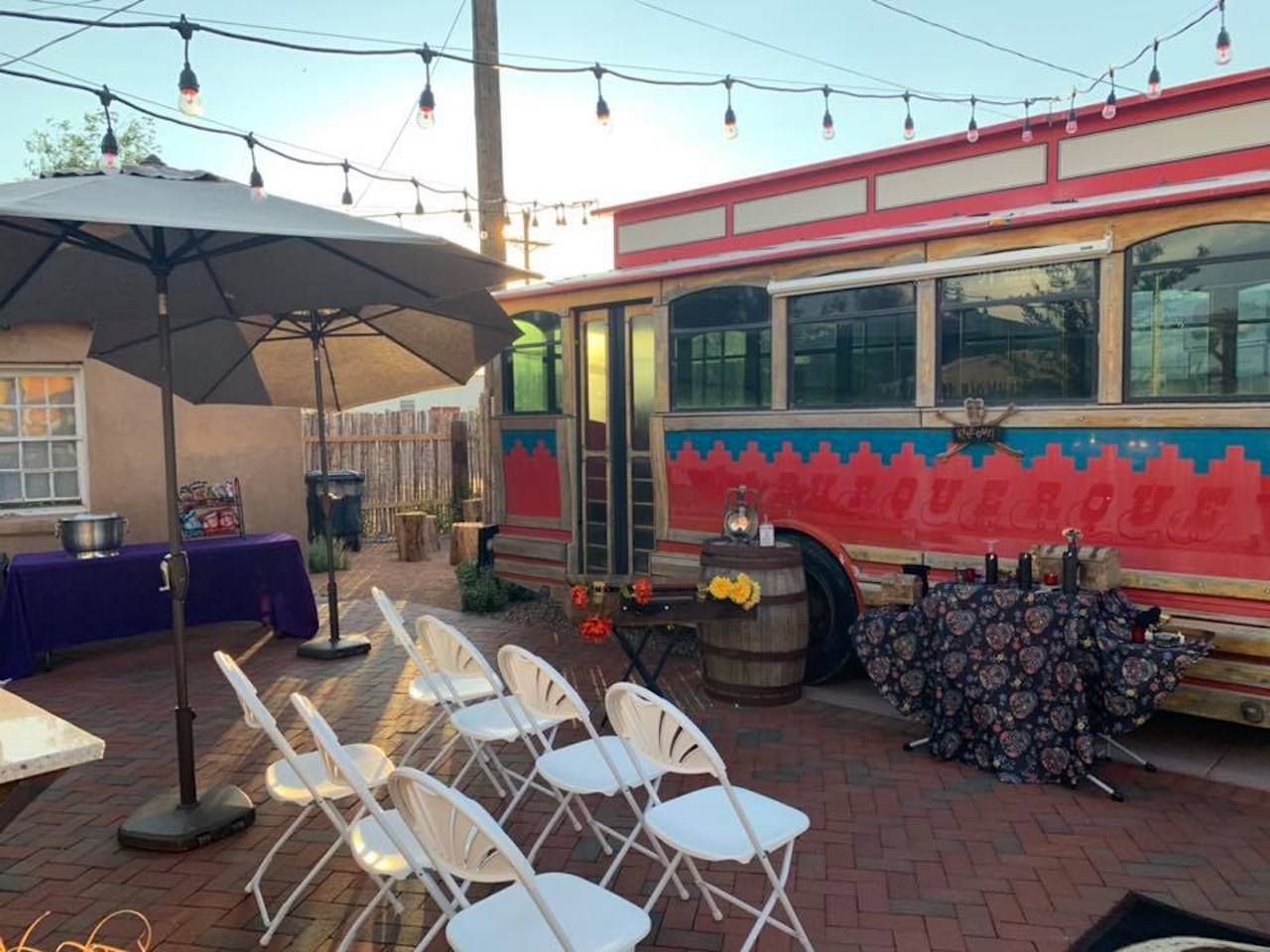 Stand almost anywhere in Albuquerque and you’ll see clouds moving along a vast desert landscape set in the shadow of the Sandia Mountains. You can see where the city ends, and past that it’s just red rocks and green trees for what seems like forever.

“We’re isolated. Denver is the nearest big city, and that’s six hours away,” muses Jesse Herron in the western-themed courtyard of his Painted Lady Bed and Brew. It’s a former saloon/brothel/general house of western mayhem that he’s turned into a three-unit inn with a nightly, local beer happy hour. “It’s the remoteness of New Mexico, there’s kind of an unknown here. But that’s what’s allowed us to keep our character. There’s not a lot of big corporations moving in.”

The neighborhood the Painted Lady sits in is a mile or so from historic Old Town, but is full of modern industrial buildings. It seems like it would be ripe for an invasion of Trader Joe’s and Lululemon. Yet despite about half a dozen breweries and distilleries nearby, it still feels real.

“People are glad we’re not Phoenix, you know?” Herron says while standing in front of an old Albuquerque street car he uses in the Painted Lady’s outdoor event space. “Then you might as well be any big city full of big box stores.”

In a time when warm weather cities all seem the same, when you could get dropped at a strip mall in Houston and might as well be in Charlotte or Orlando, Albuquerque has something so many destinations struggle to find: a sense of place. And that sense starts with a smell.

Discovering a city through red and green chile 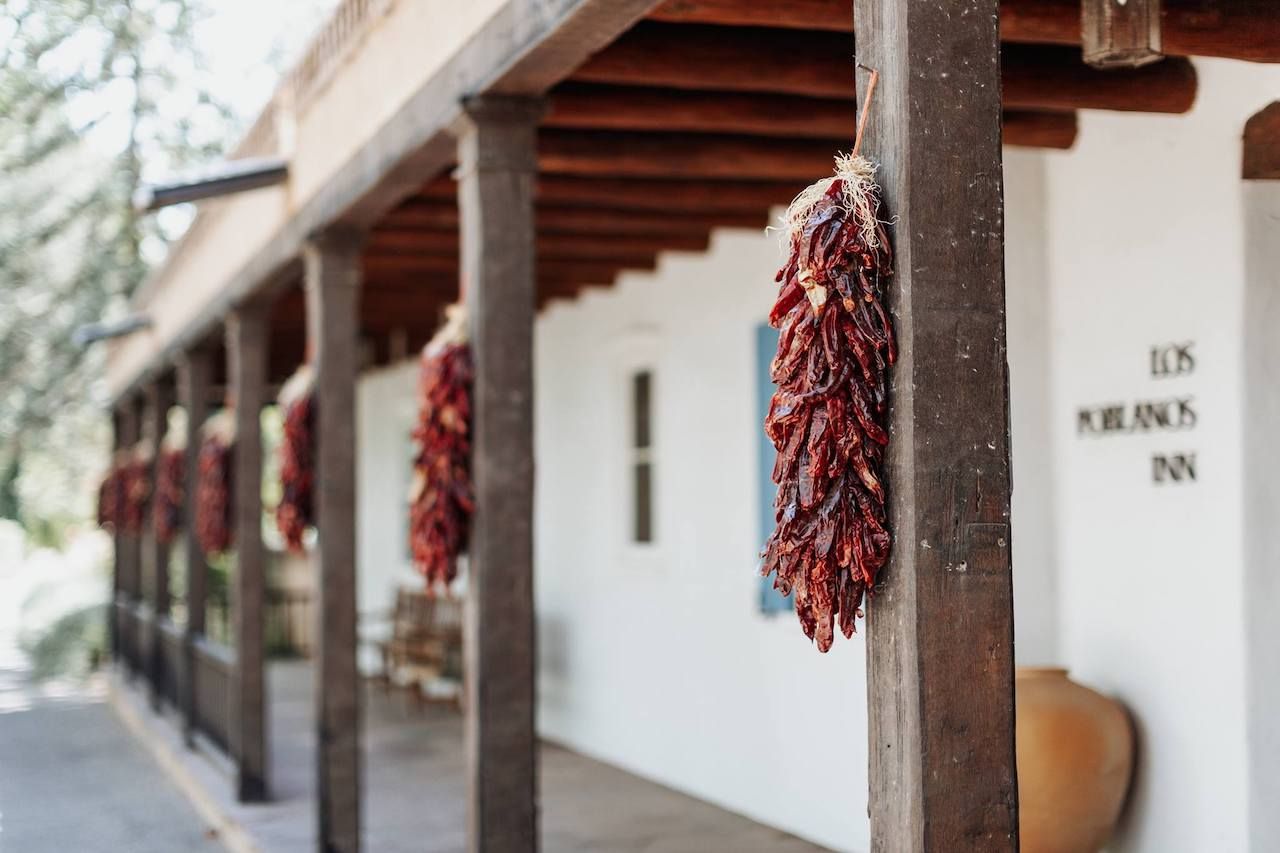 A smoky, sweet air fills the city every fall, which locals know as chile roasting season. Red and green chile, found almost exclusively in this state (and Colorado, but don’t get locals started on that) are roasting pretty much everywhere, from backyards to the abundance of farms inside city limits. Even gas stations roast chile.

Walk into an Albuquerque McDonald’s, and you can get red chile on your hamburger. Sushi King offers green chile tempura sushi. Look hard enough, and you’ll probably find a kale-and-green-chilie smoothie somewhere.

Delving into Albuquerque and its abundance of chile means delving into the city’s culture. In Barelas, a blue-collar Mexican neighborhood where tortilla counters and auto shops fill the main drag, you’ll find the Barelas Coffee House. It’s not a coffee house at all but a classic New Mexican restaurant with chile in nearly every dish.

The agricultural soul of the city is strong on the luxurious lavender farm at the historic Los Poblanos inn. Here you’ll find Campo, the kind of artfully plated, beautifully adorned farm-to-table restaurant cities brag about in tourism brochures. It has chile all over the menu, from seafood chowder with red chilie to blue corn hush puppies with red chile gribiche.

You’ll also find chile at the Indian Pueblo Cultural Center, which is one of the few historical museums in the US to tell an area’s history from the Native American perspective. You’ll learn of the Spanish conquistadors and the success of the Pueblo Revolt of 1680. You’ll learn how New Mexico’s iconic Zia symbol, which adorns the state flag, was lifted from a piece of pueblo pottery, with no credit or money ever given to the tribe. You’ll also find a restaurant in the front called Pueblo Harvest that serves a chile-covered pueblo taco. 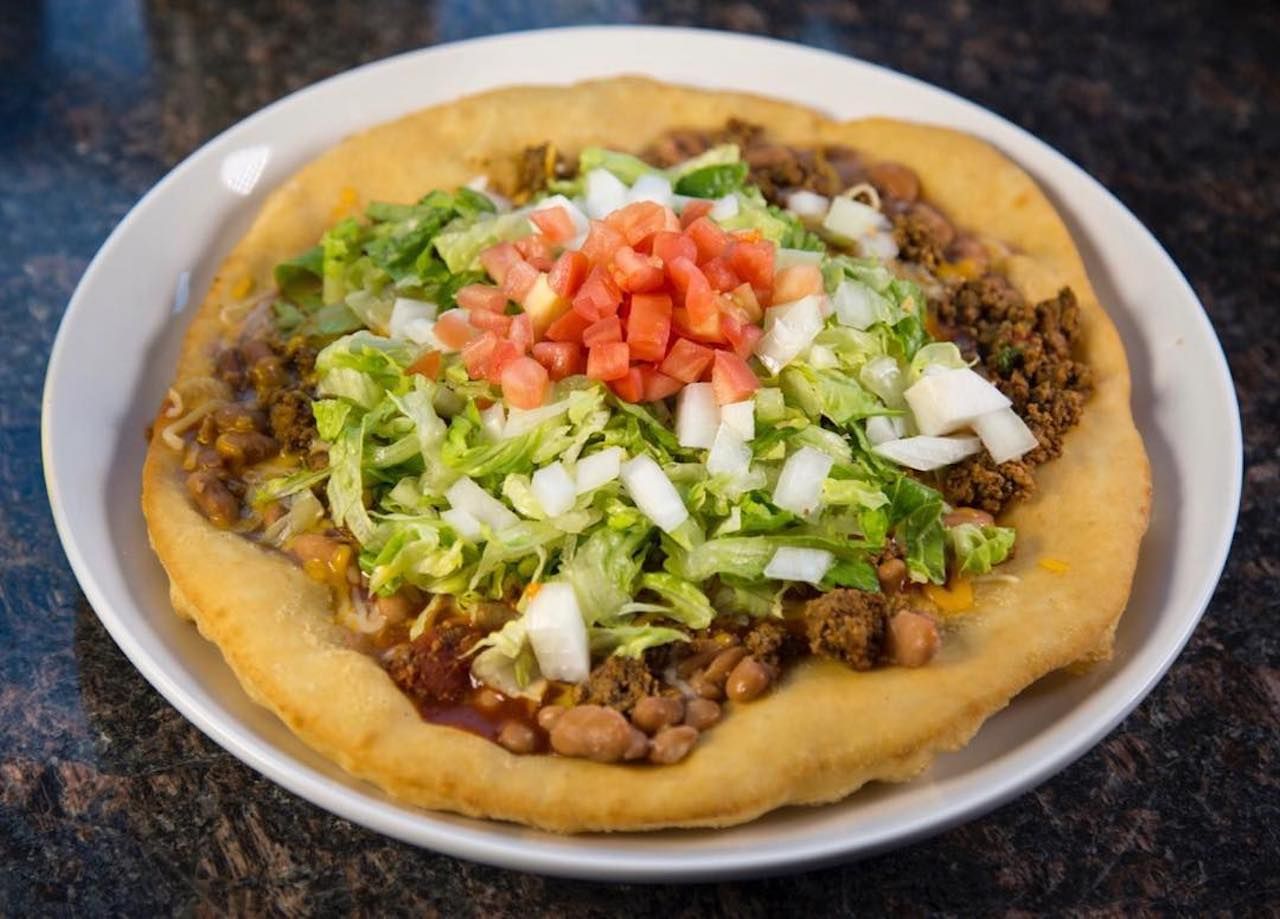 “I can’t imagine who could eat an entire one of these,” I said to the waitress as she placed the half-taco in front of me. I said it loudly, then looked to my left and saw a couple sitting at the next table each with full tacos. 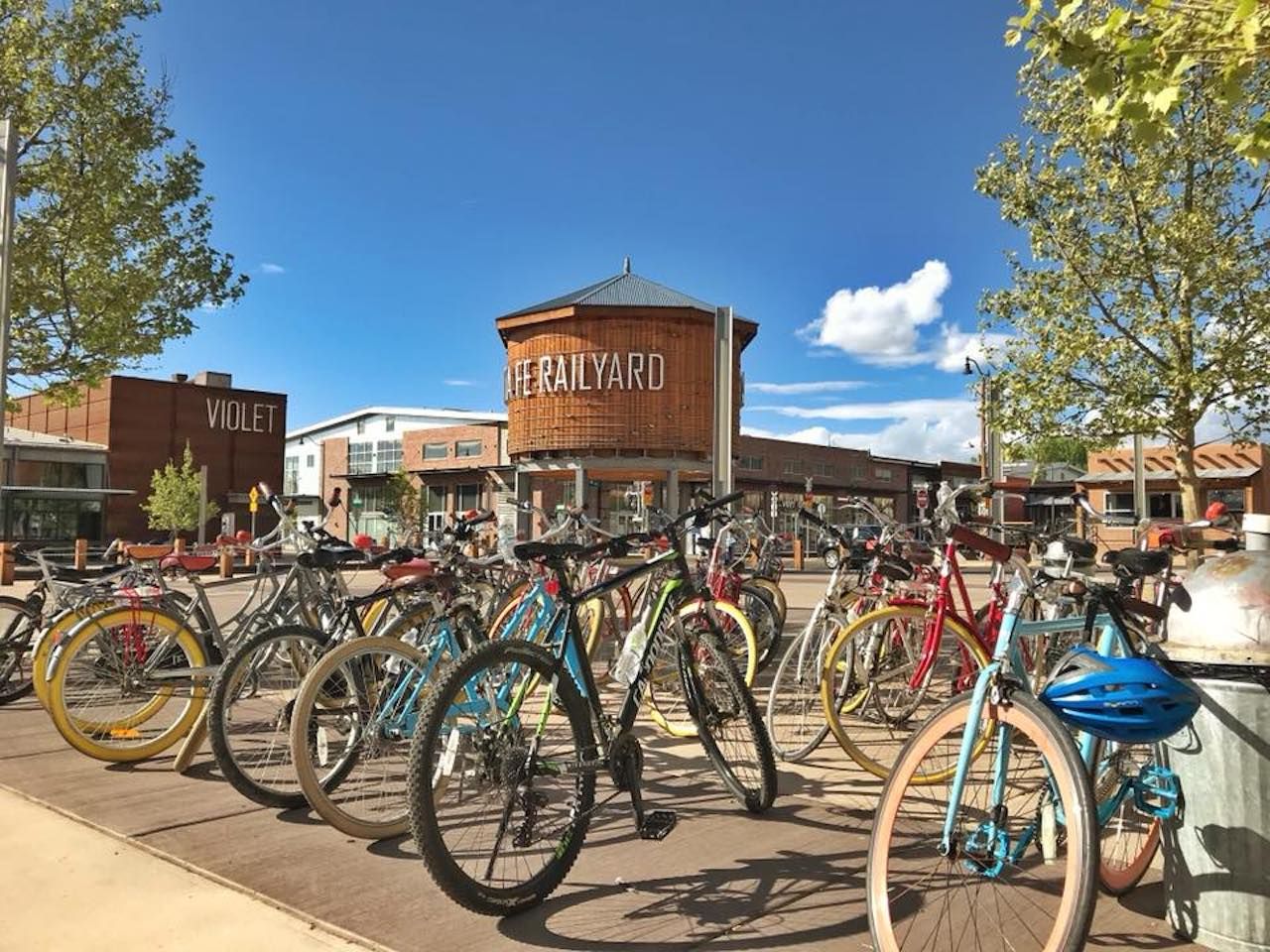 Albuquerque isn’t just a place to stuff yourself with chile. It’s also an ideal place to burn them off.

The Sandia Mountains stand sentinel over the city, with an abundance of hiking and mountain biking trails that take you deep into the high desert. Because Albuquerque sits even higher than Denver in elevation, it never gets blisteringly hot, topping out in the mid 90s during the summer. In the winter, it’ll get a light dusting of snow, but never enough to shut the city down.

Albuquerque’s most stunning natural feature, however, is the Bosque, a cottonwood forest that runs along the Rio Grande. A bike path runs through it, connecting the city via a shady respite where every few miles you can stop at one of the city’s 60-plus breweries, or go to Pop Fizz for chile mango paleta. Renting a bike is convenient, with Routes Bike Tours in Old Town offering both rentals and guided trips.

“We’ve got this amazing national forest in the middle of a desert city that provides this incredible green space,” says Painted Lady’s Herron. “We don’t have a ‘riverwalk’ like in Oklahoma City or Kansas City, cites about our same size that have these riverwalks with a Dick’s Last Resort and a Hard Rock. Those don’t lend themselves to letting a city maintain its identity.”

Albuquerque welcomes TV tourists, but won’t change for them 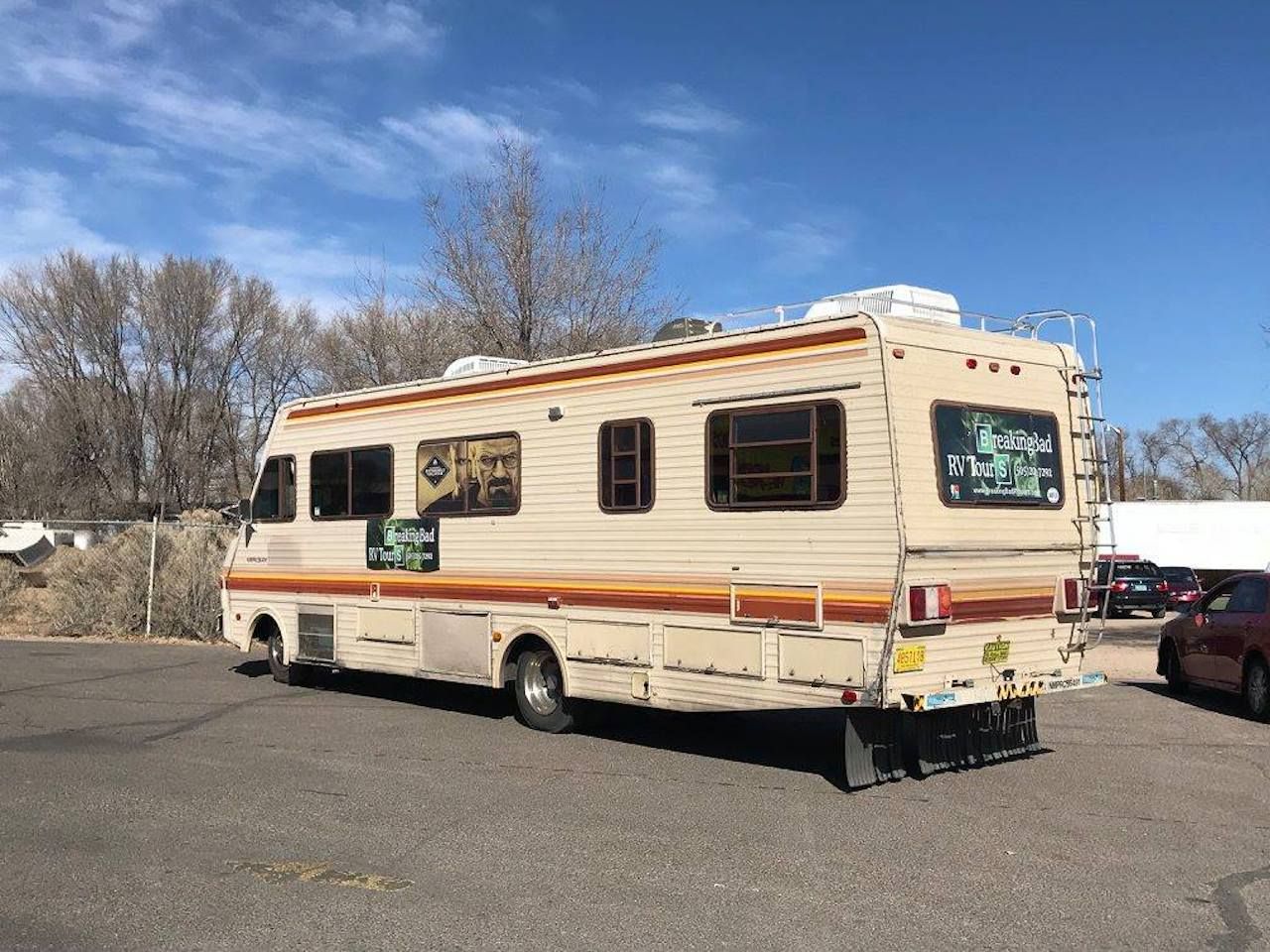 Maintaining a city’s identity after sweeping TV fame isn’t easy, but Albuquerque does it masterfully, telling the world, “Well, I guess you all are coming, so here’s our city.”

Albuquerque makes no apologies for itself, and hasn’t scrubbed itself to appease the Breaking Bad masses. It’s slowly but surely bringing in all of the crafted amenities of a 2019 metropolis, but it’s still gritty, and has no plans to change.

At the Grove Cafe & Market, a fantastic fresh salad and sandwich shop most famous as the spot where Walter White meets uptight Lydia to move product to Europe, I ordered an iced tea from the manager, then predictably added, “No stevia.”

“I’ve heard that once or twice,” he told me, not really laughing.

A few blocks away, the Crossroads Motel, where Wendy the hooker did her best work, hasn’t turned itself into a boutique. Downtown, you can sip curated wines at Wine.Dive. while listening to live jazz, but still find yourself sitting next to a couple that’s having a wine chugging contest. There’s the requisite hipster bowling alley, with craft beer and chef-driven food, at Skidmore’s Holiday Bowl, set among a sea of auto dealerships on Lomas Boulevard. But you’ll still be sipping a 7 percent local wheat beer when a couple of guys invite you to the nearest liquor store to buy Four Lokos before it closes.

At Twisters — the restaurant used as Los Pollos Hermanos — patrons give slightly agitated side glances to the RV-load of Breaking Bad tourists who are there scarfing breakfast burritos. The tables are sticky, the overly sweet drinks are served in unmarked Styrofoam, and the restaurant still serves a fast-food version of New Mexican classics. It does not, however, serve chicken.

Albuquerque hasn’t turned itself into Breaking Bad land because it refuses to give up its character. So going here just to take an RV tour and pick up some blue meth candy from the Candy Lady in Old Town is missing out on one of the most unique cities in America. Though it’s isolated by hours, that isolation is part of what’s kept it such a special place. Just understand it will both be exactly like and not like what you saw on TV.

CultureWhy Albuquerque Is the Perfect Fall Getaway
Tagged
Culture Entertainment Insider Guides TV
What did you think of this story?
Meh
Good
Awesome

These Albuquerque Airbnbs Let You Capture the City's Southwest Charm

Why Albuquerque Is the Perfect Fall Getaway

20 Albuquerque Bars and Restaurants Us Locals Live By

You Know You're From Albuquerque When...