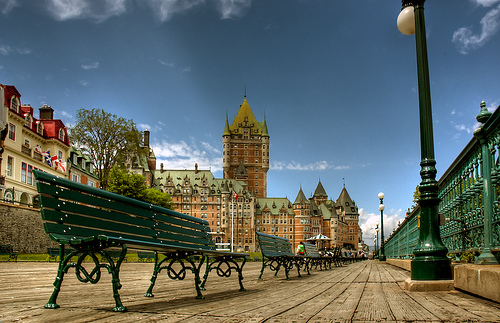 The French language has been in the news a lot lately – in part, because this weekend saw the 2008 summit of the Francophonie – an organization of French-speaking nations, loosely equivalent to the British Commonwealth – take place in Quebec City.

Here are a couple of interesting stories that came up during the summit:

Last week, on the eve of the Francophonie’s summit, the Rwandan government announced that French would no longer be the language of instruction in schools. Instead, most classes will be taught exclusively in Kinyarwanda or English.

The move is a complicated mix of pragmatism (since English is viewed as a more global or useful language) and post-genocide backlash against the French government, which has been accused of aiding the Hutu militias responsible for killing nearly 1 million Tutsis in 1994.

The Globe and Mail has a good article on the move, and the events leading up to it.

French officials are scrambling to quell an angry backlash in the ranks of Quebec’s separatists following Nicolas Sarkozy’s apparent endorsement of a unified Canada during the summit.

“If someone tries to tell me that the world today needs an additional division, then they don’t have the same read of the world as me,” Sarkozy said on Friday. “I don’t know why a fraternal love of Quebec would have to be nourished through defiance toward Canada.”

You might think that a foreign leader’s support for an existing country would be a given, but in fact Sarko’s comments were a break from French presidents past, who’ve often voiced sympathy for the fight for a Quebecois nation. (See, most infamously, Charles de Gaulle’s “Vive le Quebec libre!” speech.)

Said an incensed separatist politician: “I hope the President of the republic poorly expressed himself and that it is not the way he actually thinks. If the President of the French republic came and interfered in our affairs and took a position against the independence of Quebec, well then it is extremely serious.”

Of course, the separatists have no issue with the French presidents who’ve “interfered in our affairs” by taking a position in support of Quebec independence…

Meanwhile, In The Developing World

Many of the poorer member nations of the Francophonie expressed concerns this weekend that their problems would be forgotten by Western countries preoccupied by the crisis on Wall Street.

“It’s a crisis that will ultimately strike us, we will see development falling away, we can anticipate prices for our commodities dropping, there will be much less enthusiasm for helping us,” said President Blaise Compaoré of Burkina Faso.

“It’s countries like ours, countries on the road to development, that will take the hardest hit,” added Denis Sassou Nguesso, the President of the Republic of Congo. “At this moment, we don’t really know what that hit will be.”

These destinations are open to US tourists this winter
Everything Americans need to know about traveling to Mexico right now
How to plan for 2021 travel in the age of COVID, according to 23 travel agents
7 countries you can’t enter if you have a DUI
13 airports where you can get tested for COVID-19 in the US