If you haven’t been watching Brazil, it’s worth paying attention now to the revolutionary policing project happening in the city that will host this year’s Summer Olympics. As communities around the world discuss how best to police and protect marginalized communities, Rio is eight years into a radical approach to policing its most crime-ridden favelas — one that involves actual invasion and occupation of neighborhoods by cops.

The pacification project, which is also known by the Portuguese acronym for its police units, UPP, is likely to get more coverage as the Olympics draw near. Rio has been rocked by shooting scandals involving UPP officers in the last year, and ironically, pacification is partly blamed for this city’s shocking police homicide statistics.

With Brazil’s government and economy hanging in the balance, and with the world’s eyes watching, there’s only more pressure on Rio to make its approach to maintaining order work. The project still has the potential to serve as a model for cities worldwide — or it could end up as another failed social experiment.

Here’s your quick guide to Rio’s UPP and the social dynamics behind it.

Favelas are essentially the poorer neighborhoods in Brazil, but that doesn’t mean they’re all alike. Often branded as “slums,” the reality is that favelas run the gamut from neighborhoods that are increasingly middle-class, primarily in Southern Rio, to far more marginalized communities. There are hundreds of communities considered favelas in Rio, and about a quarter of the city’s population lives in them, according to Brazil’s 2010 census.

Favelas have traditionally operated in a sort of legal parallel to the rest of this sprawling city. Many residents of favelas don’t pay for their electricity or water, even in neighborhoods that are now “pacified.” (My friends who live in the favelas often joke that my electricity rates are so high in order to pay for their free power.) Official land ownership in many favelas is also pretty sketchy, though there’s long been a movement to clear this up.

Most favelas were traditionally controlled by drug gangs or mafias that created informal systems of law and security for residents, complete with their own enforcement and punishment mechanisms. This is where a lot of the outside world gets their image of favelas, especially with their depiction in popular movies like “City of God.” That picture’s not inaccurate — drug gangs still run dozens of favelas, and high rates of crime and violence are what pacification programs are trying to drive out.

2. What is the pacification program?

Billed as a security and social services project, Rio de Janeiro’s pacification program was launched by the Rio state government in 2008. The idea is to use the state’s military police to invade dozens of the city’s largest favelas in order to wrest control of them away from drug gangs, which have ruled large swathes of the city for decades. The city’s first favela invasion was in December 2008.

The takeover works like this: First, the state’s elite special operations unit, BOPE, raids the favela, going door-to-door and seizing weapons, drugs and money. Then BOPE sets up a command post right in the middle of the neighborhood, from which they run their battle to arrest drug lords. When things have calmed down a bit, usually within a few weeks, BOPE moves out and a UPP command post is set up, typically staffed with dozens of permanent officers.

Originally, the police occupation was supposed to be followed up by expansions in favela social services, but there has been a lot of criticism of this element — residents say many of the non-police programs simply never happened. The social part of the program has since been rebranded from “UPP Social” to “Rio Mais Social” (A More Social Rio). The state shed the UPP moniker in an effort to restore faith in the government’s ultimate goals for pacification, which are essentially to bring favelas into the mainstream of Rio life by offering more stable services and encouraging community self-governance.

So far, 38 UPP stations have been set up across the city. The target, according to Jose Mariano Beltrame, Rio state’s security chief, is to set up at least 40 of them.

3. Why did Rio decide the favelas needed pacification?

There is a lot made in the English-language press about the fact that this pacification program has taken place in the run-up to the 2012 World Cup and the 2016 Olympics. However, pacification had already begun before the city was awarded the Olympic games in 2009. A diplomatic cable from that year published by WikiLeaks reveals much of the background reasoning behind the 2008 program. That philosophy doesn’t mention the World Cup or Olympics as catalysts for action.

The leaked cable does, however, note that the “approach closely resembles US counter-insurgency doctrine in Afghanistan and Iraq.” It also describes the economic benefits to city and state governments and utility providers if Rio’s favelas are brought completely into official compliance. Here’s a snippet:

“Some economists have forecast an increase of 90 million Brazilian Reals (45 million USD) in new property and service taxes that would go towards the Rio municipal government, should all favelas come under the authority of Rio state.

The president of Rio electricity provider “Light” estimated the economy of Rio de Janeiro could grow by around 38 billion Brazilian Reals (21 billion USD) through increased commerce and new jobs.”

4. Who was in charge of the favelas before the UPP showed up?

It depends on the favela, but the simple answer to this question is: primarily drug gangs.

The largest and most powerful criminal gang in Rio is the “Comando Vermelho,” or Red Brigade. For decades, large parts of Rio de Janeiro were de facto no-go areas for the city’s police. Instead, drug gangs held sway.

The gangs have traditionally seen favelas as soft targets — neighborhoods of largely poor, underrepresented people that often have little community organization. One of the goals of the UPP was to instill a framework for community leadership outside of the drug gangs. 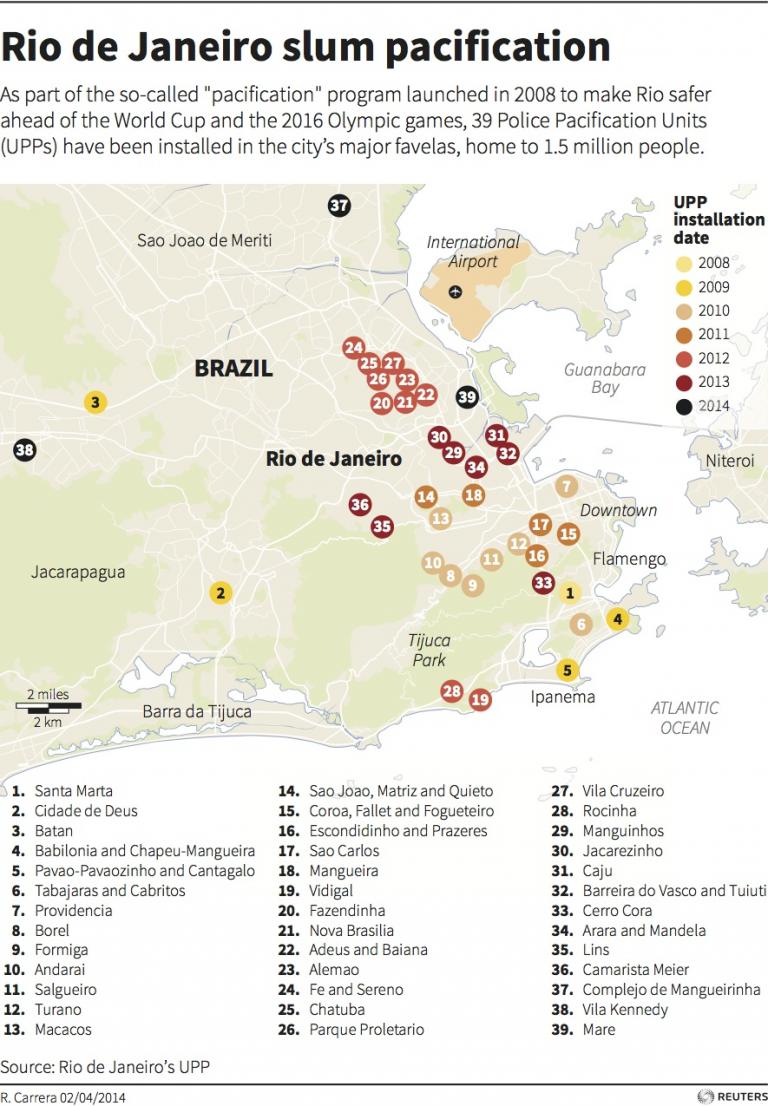 This map was created in 2014. Since then, Rio’s UPP no longer lists Mare as a favela where they have a unit installed, making the current number 38.

5. So, has the UPP program worked?

This is a very complicated question. With almost 40 favelas now occupied, there have been differing levels of success across the city.

An excellent five-part series by RioOnWatch, an organization that monitors favelas in this city, examined which favelas have welcomed the UPP units and which continue to be mired in civil wars between drug gangs and the police.

The RioOnWatch reporting is largely negative, detailing widespread problems with corruption among UPP officers, ongoing violence even in occupied favelas, and a culture of distrust and fear between residents and the occupying police units (we’ll be looking more at this element of the pacification program in a forthcoming story).

There have been other problems, too.

There is some evidence that the pacification program has merely pushed organized crime out of the occupied favelas and into surrounding cities and communities. Then there are all the failings of the promised social services programs, which many residents feel have ranged from nonexistent to woefully inadequate.

And pacification has had some perverse effects on communities: Favelas that have become safer have also become more expensive, driving out families that have lived there for generations, some of whom have ended up homeless.

6. Rio’s got some scary police homicide stats. Are these UPP guys the cops who keep shooting residents?

A significant portion of the police shootings in Rio occur in gunfights between the police occupying favelas and drug dealers or other criminals they’re doing battle with. Indeed, the “war” between UPP forces and organized criminals is one of the reasons so many young nonwhite men have been killed in Rio’s favelas in recent years.

But it’s not just criminals getting shot. Rio has seen several shootings by UPP officers this year of primarily young, male, nonwhite favela residents who just happened to be in the wrong place at the wrong time.

7. So, what good is coming from all of this?

Again, this is tricky.

There are reports from some favelas that life has greatly improved for residents under the program, and in some neighborhoods, the UPP officers are welcomed. In many other favelas, however, UPP officers are viewed with distrust and scorn by residents who feel the officers are just as bad as the dealers they replaced.

Beltrame, the security chief, recently defended the UPP process, saying that homicide rates in some pacified favelas have dropped to zero. And there’s no question that dozens of drug dealers have been arrested or killed in the pacification process.

Despite the challenges faced by the program, Rio’s leaders have shown no signs of slowing it down. While acknowledging failures with the rollout of the city’s UPPs, Beltrame doubled down on the program in 2013, saying the city might even need more than the initially proposed 40 UPP stations.

Earlier this year, the security chief announced a new violence-prevention training program for police officers in the run-up to the Summer Olympics.