Editor’s note: Mirae Campbell has one of those Instagram accounts that make your Monday morning commute bearable and motivate you to go for a hike, even in the middle of winter. Whether on the mountain in Whistler or around the Lower Mainland, Mirae lives for the outdoors and has turned shooting her life from a passion to a career. Mirae freelances for the likes of Contiki, a company she states as being the reason she decided to re-evaluate her life choices and chase what she loves. She talks with us about the backstory of her life on Instagram. Find her at @miraecampbell. 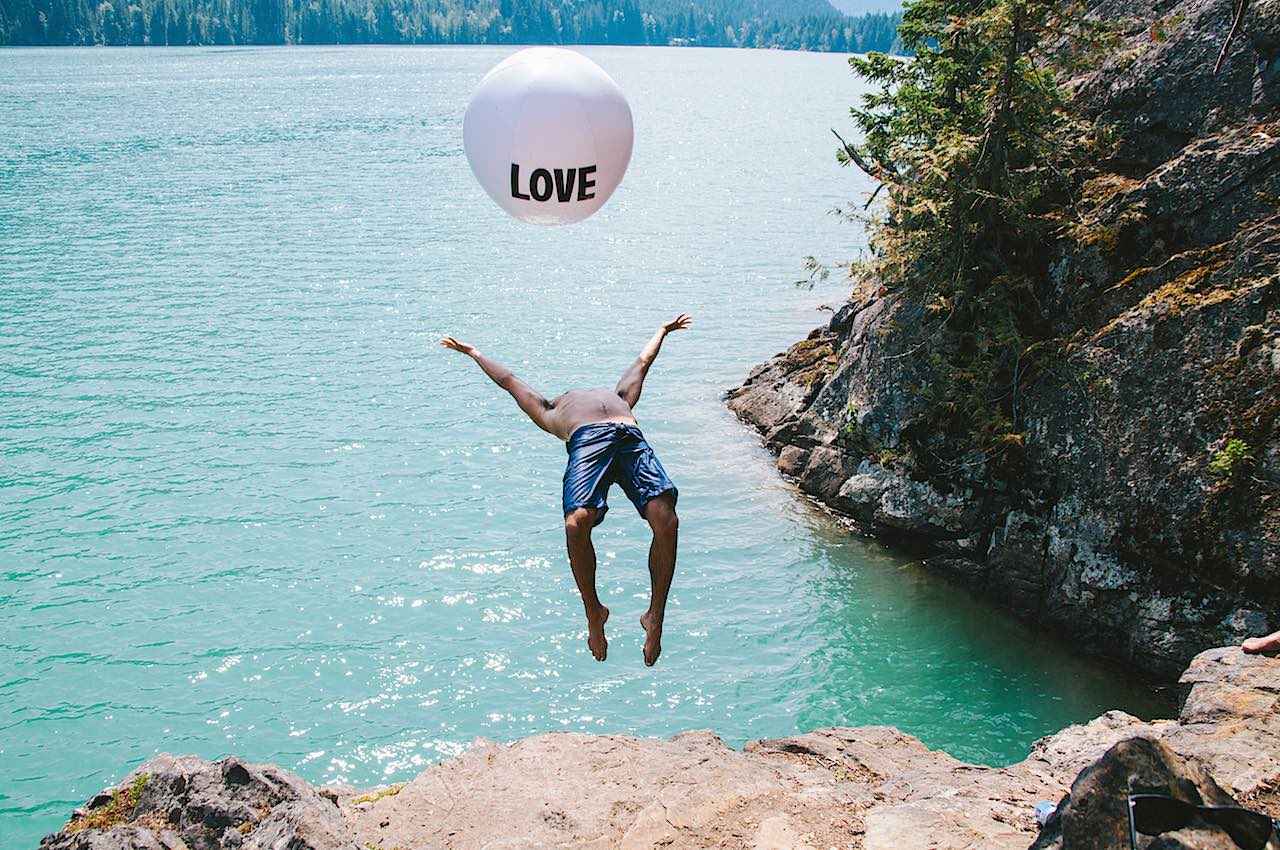 This was one of the best days of my summer 2015. I went to spend the weekend with my brother and all of his closest friends at one of their lakeside properties, and we spent the entire weekend disconnected from the world, playing in the sun, sharing smiles and laying in hammocks. There is a passion-project company in Vancouver called the Big Love Ball and one of my friends randomly stumbled across a big love ball on the street on his bike ride to work one day, and he gave me the ball that afternoon and said, “you need to have this, you’re going to do amazing things with it.” So with that in mind, I started taking this 3ft ball of love everywhere I went and decided to start a tag on Insta called #wheredoeslovetakeyou and took photos with it in the mountains and by the ocean because I feel that it symbolizes exactly how I feel in the moment without having to say anything. 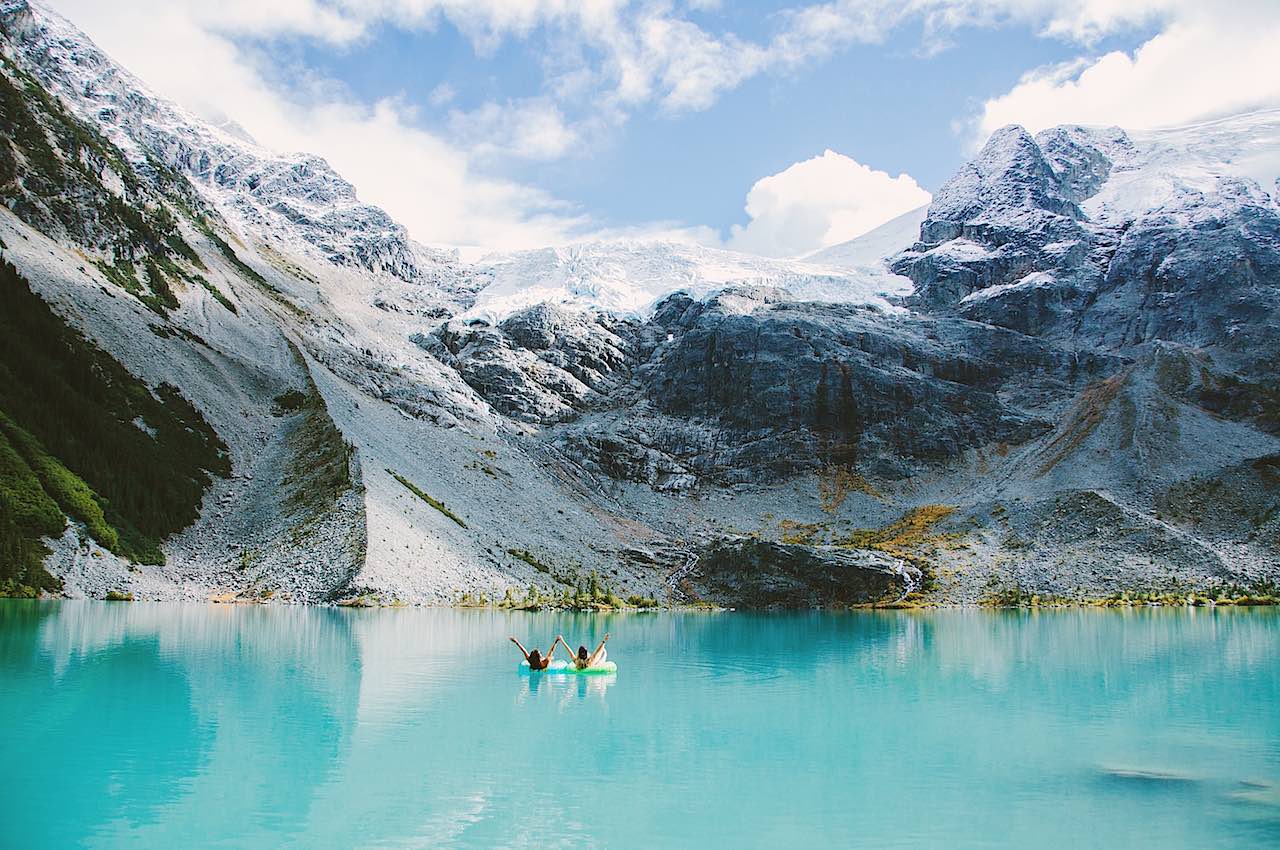 I can’t look at this photo without laughing a little to myself — this was taken in October when the glacial lake had long lost its warmth and started to freeze over for winter. It had snowed that morning and we woke up late in the morning and decided to roll over to Joffre lakes for a quick hike to the third lake. We were all in rough shape from our shenanigans in Whistler the night before but we couldn’t be convinced otherwise that fresh air would be good for us. My best friend brings her inner tube to the most absurd locations and we always end up getting the most epic shots with them so I decided to pack mine in this time as well. It was snowing on and off all the way up to the lake so we were feeling a little discouraged and a little cold by the time we got up there, but we jumped in anyway. Needless to say, we were so cold we couldn’t walk until the sun thawed our butts out because our skin had turned completely red, swollen and froze solid. Photos like these make me value the people I’m surrounded with and how lucky I am to live in British Columbia. 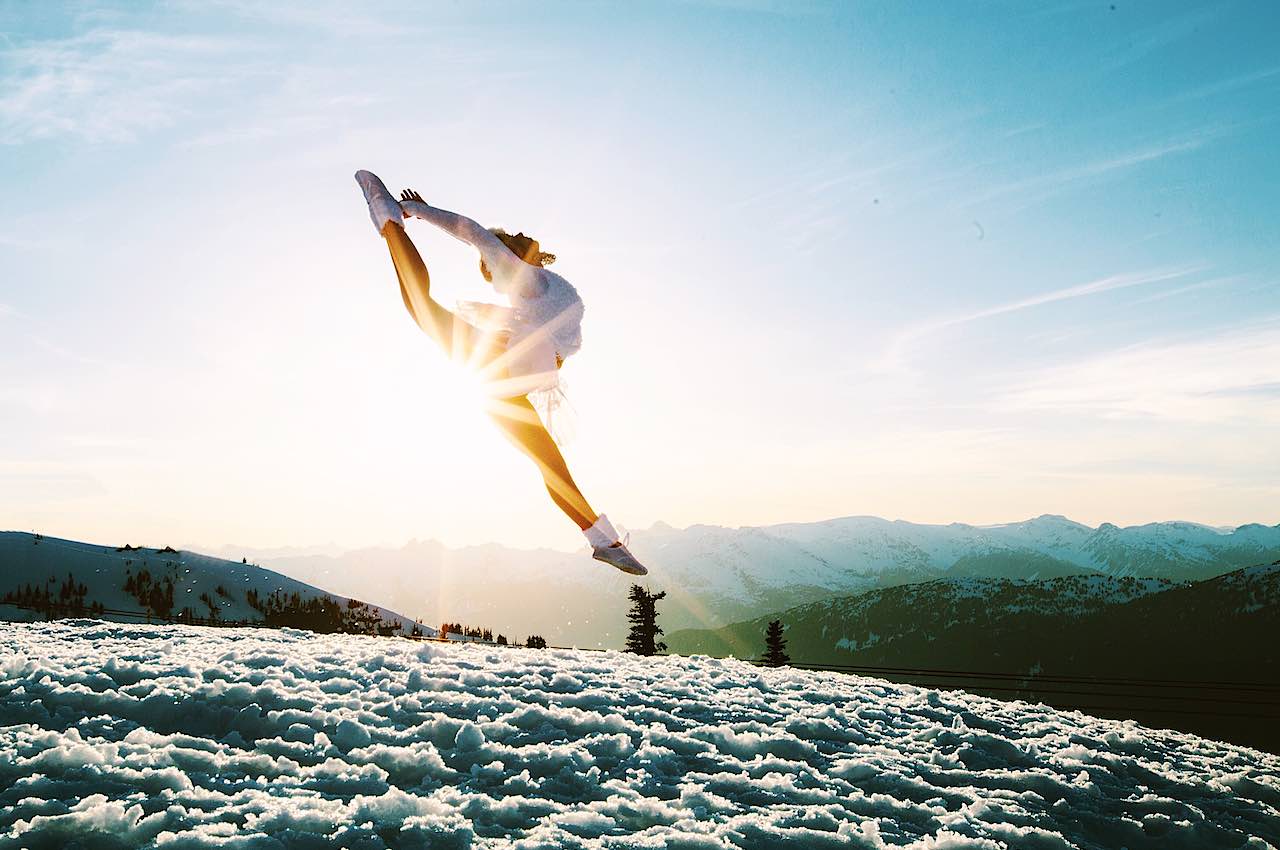 The World Ski & Snowboard Festival goes down in Whistler every year and I was invited to shoot and socialize on top of Whistler Mountain for a sunset event. Sunsets in Whistler atop of mountains are super hard to catch unless you’re in the air or stick around long enough to ride down in the dark, but even then, it’s a tough move to make. There was a dance performance that went down right as the sun dipped below the ridge line and I had somehow gotten onto the roof of the building hosting the event and I stumbled upon the girls practicing their dance routine behind the building in the snow. I decided that I needed to go snap some photos (after I got a stern chat about rooftop safety and boundaries from the Ski Patrol and the event coordinator) of the dancers while the alpenglow was happening. 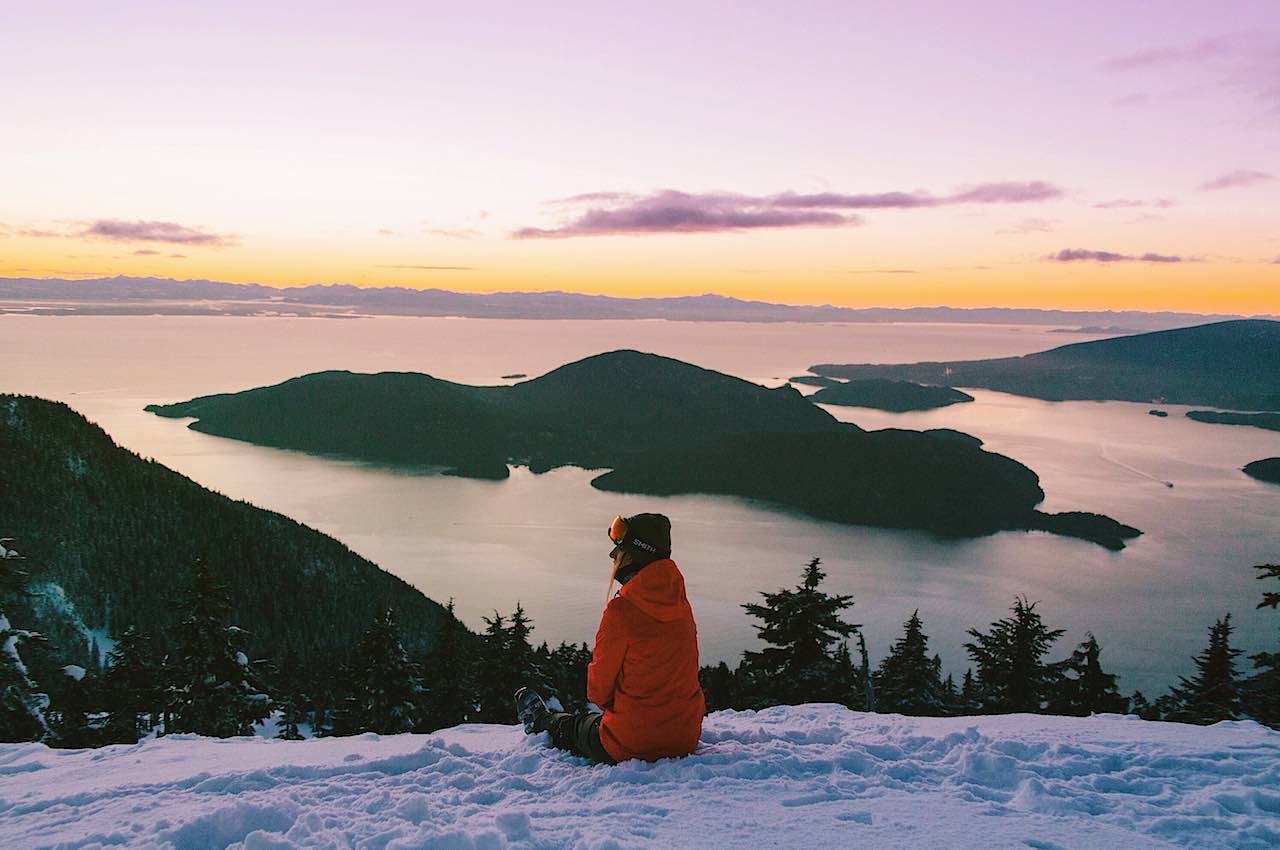 This was taken on the 4th of January — My friend Ola and I were on a roll of being in the mountains everyday since the beginning of the new year, we had just come back from a backcountry trip in the alpine to ring in the New Year and we were adamant to watch sunset from any other place other than a mountain top that week. We both got off work that day just before sunset and grabbed our gear and sped up to the local ski hill to catch the last light. We ended up missing sunset because we had too much fun messing around in the snow before we made it to the lookout, but everyone knows that the post-sunset colours are the best. 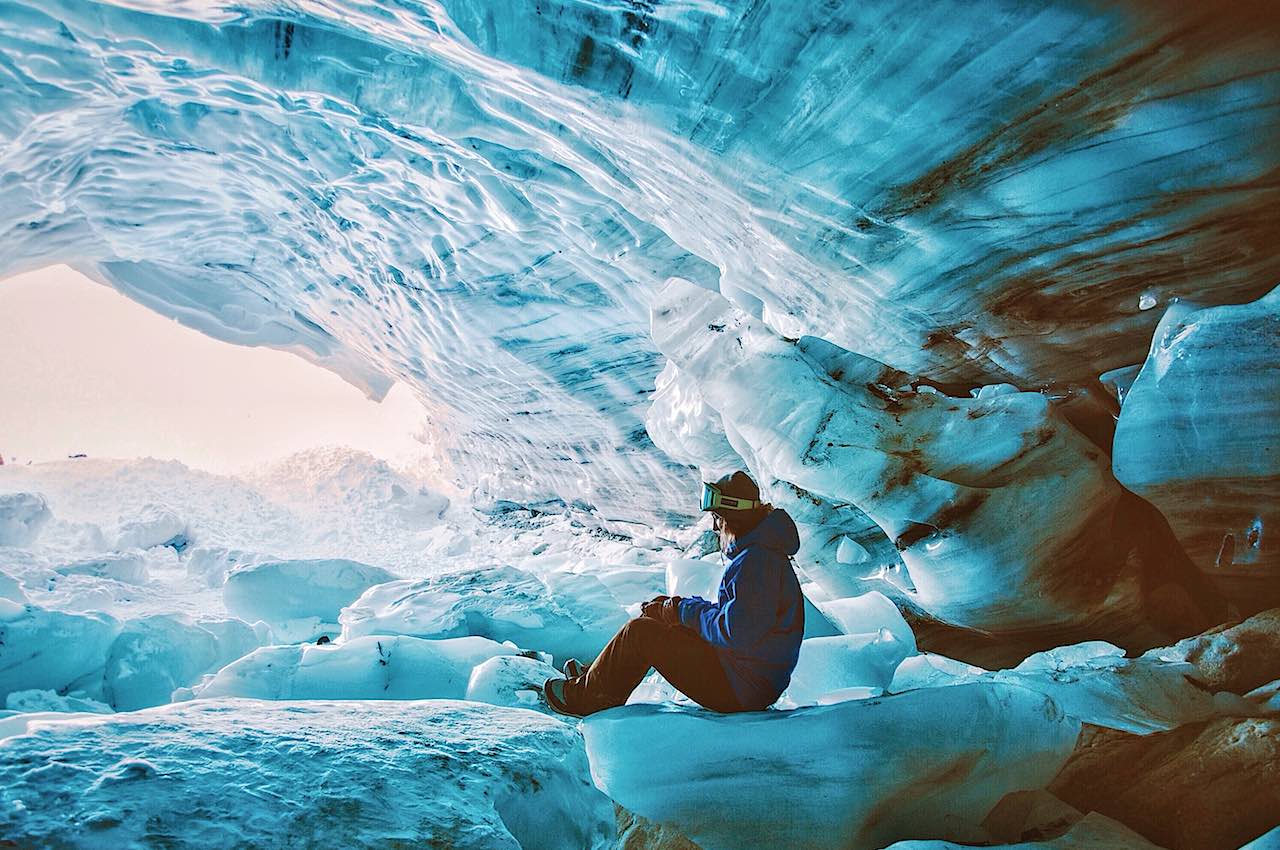 There’s a small window in the winter where you can access a glacial cave in Whistler on the backside of the Glacier Bowl before the snow storms roll in and cover it up. This cave was the ‘it’ cave for the month of January — it should’ve almost been a standard tourist attraction in Whistler for that month from the number of people who visited it based off of a photo they saw on Instagram. It’s just as beautiful in real life as it is in all of the photos — we had a ‘girls only’ snowboard day and went on a mission to find it. We thought it would be a huge ordeal and adventure to locate, but it ended up being right off the beaten trail with a huge party train of people, naturally we joined them. 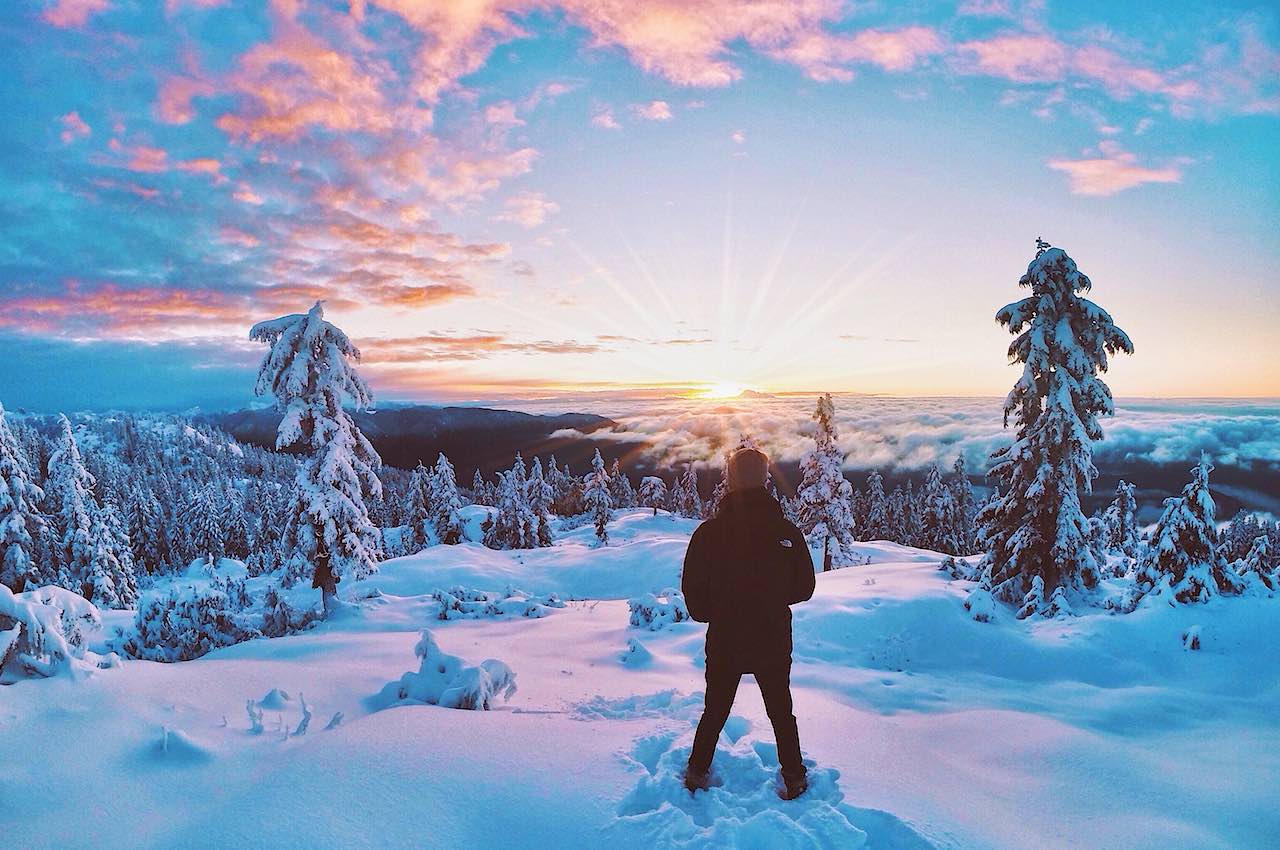 Before I moved to Whistler, I had only been snowboarding at one resort, Mt. Seymour. I got a job there last winter to teach myself how to snowboard and fell in love with every tree, edge, and hill on the mountain. Still to this day, it’s my safe haven and place to go when my spirits are down. It’s the go-to spot for sunrise in the city and quite frequently offers an even more stunning sunset. I like to keep my company consistent when I go to watch sunrise because I find that I need a good balance of silence and social, especially that early in the morning. The guy in this picture is one of the people I’ve shared the most sunsets and sunrises with and is the first person that comes to mind when planning and adventure that revolves around the sun’s movements. 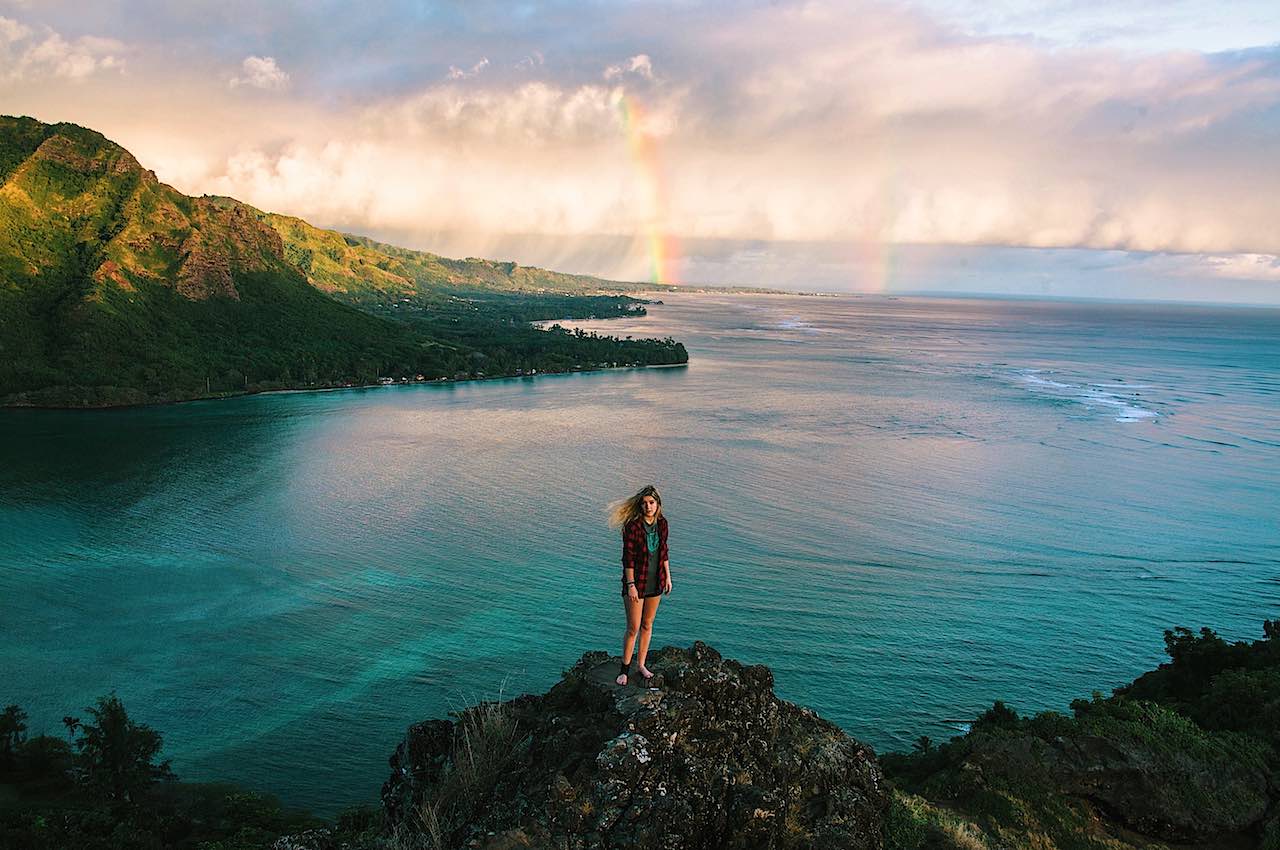 We only had 10 days in Hawaii so we had to ‘carpe yolo’ the shit out of each day we had in Oahu. Every day we climbed as many hills and mountains as our legs would physically take us.

Even if the weather was questionable we went anyways — this morning was one of those ‘is it worth it?’ mornings but we woke up and scrambled up a heap of jagged rocks in the dark to watch the sunrise. Turns out, it was worth it because every weather condition came out to play and we were slammed with the most epic light and double rainbow I’ve seen to date. If you look closely, Ola is wearing an ankle brace — she tackled every hike with a fractured ankle (including the Stairway to Heaven). 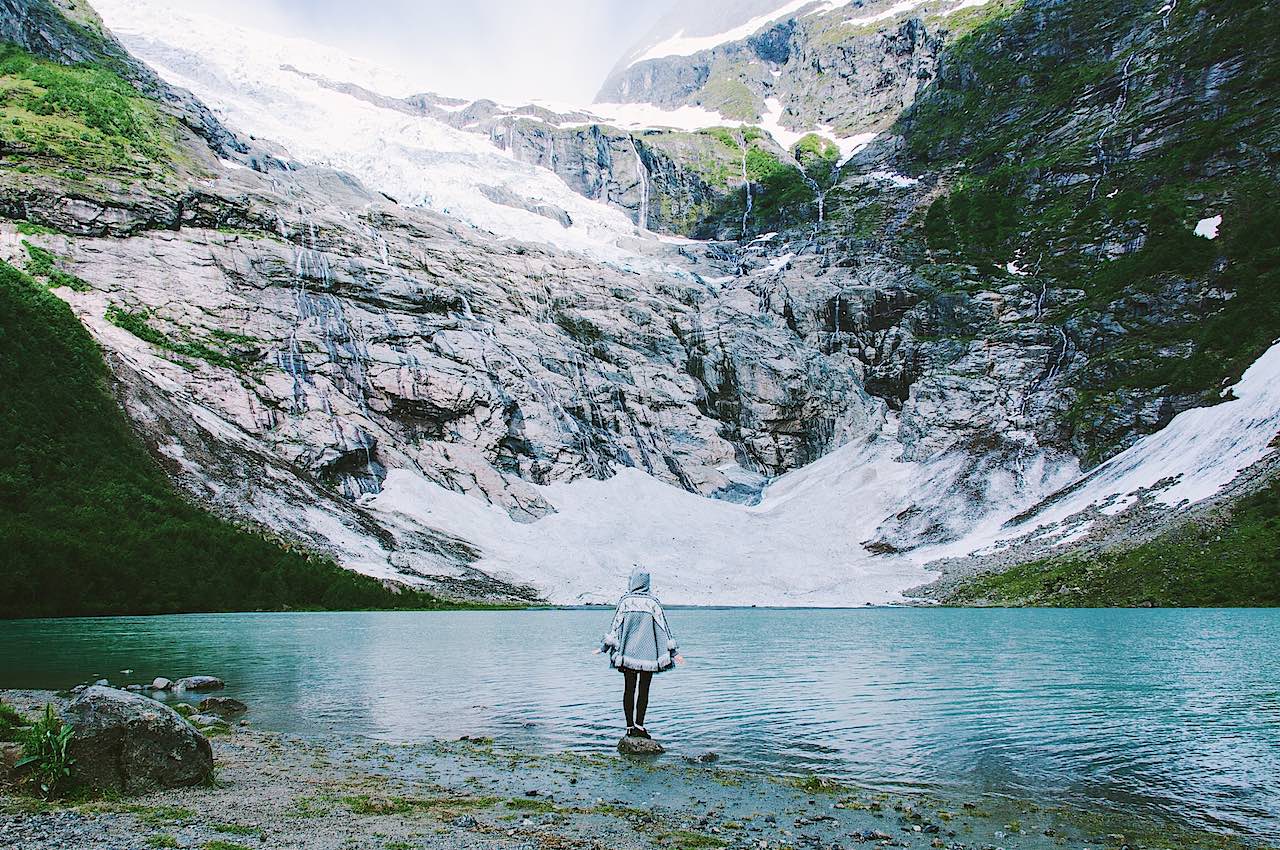 I’ve always said, I couldn’t see myself living anywhere else in the world other than British Columbia, until I went to Norway. Norway is one of those places that changed my life. Around every bend in the road was a place that looked like this. The weather was similar to the kind of alpine conditions we get here in BC and I only had a small window to snag a photo of this glacier before the clouds aggressively rolled in. I was on a shoot for a Contiki tour and the girl in this photo had lost her luggage so she bought this beautiful poncho while in Copenhagen and wore it around for the entire tour, the colours of her poncho matched the colour of the glacier so it seemed like a fitting shot.