THERE ARE many bizarre and fascinating places across the world. Ghost towns are particularly intriguing and strange places as there is something unsettling about an entire town that has been abandoned and their existence begs the question: What causes these places to become deserted? Here, we examine 10 of the eeriest and most intriguing ghost towns from around the globe. 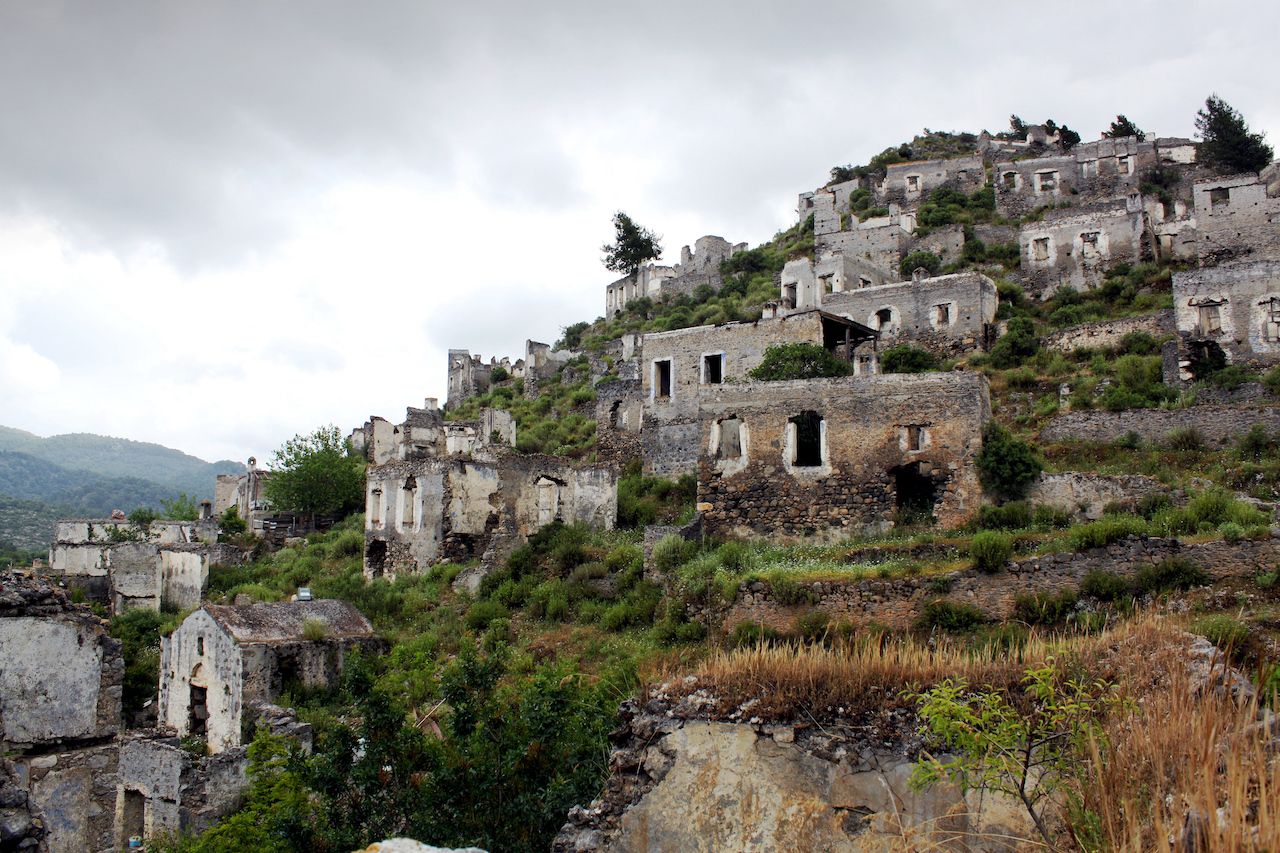 At the beginning of the nineteenth century the town of Kayakoy, Turkey, was thriving. The people of the town had lived there for centuries before the Christian residents were expelled from the town in 1923 as part of a population exchange and told to bring only what they could carry. They were sent to Greece, where they became second-class citizens. Most could not even speak Greek. At the same time, Muslims were evacuated from their homes in Greece and sent to Turkey; however, they did not settle in Kayakoy, as they could not adapt to the town and were unable to cope with the climate. A major earthquake devastated the town, causing it to become deserted. It is now a ghost town and UNESCO recently named Kayakoy a World Friendship and Peace Village. Visitors are welcome to roam the streets and experience the town as an open-air museum. You can even visit a house which has been left in place since the Greeks left and which has some remaining furniture and artifacts. Louis de Berniere’s novel “Birds Without Wings” was also set in Kayakoy. 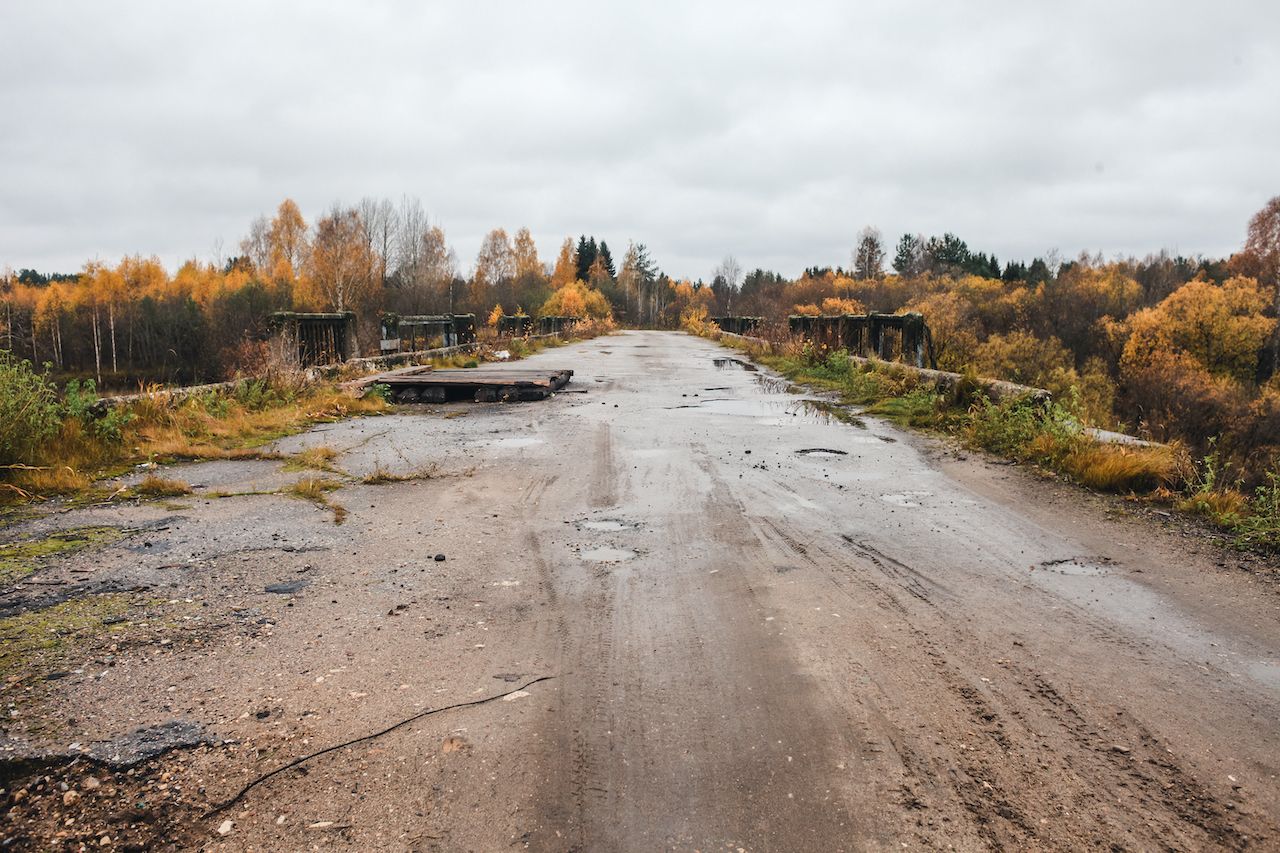 No list of ghost towns is complete without Centralia in Pennsylvania. Originally a bustling coal mining town with over 1,100 residents, in 1962 a fire began burning in the mines below the town, a fire still burning today. Most of the town’s residents were relocated by the state; however, a few refused to leave and stayed in the town. The town is now filled with overgrown streets, burnt trees, and cracked pavements. It is commonly believed that the fire was started by volunteer firemen burning trash in a strip mine, which led to the fire spreading via a previously-hidden hole into the maze of mines below. The fire may burn for another 250 years before it is exhausted. Centralia still thrives as a tourist destination and lures aficionados of the macabre to within its limits, intrigued, maybe (probably), by the possibility of death by asphyxiation. 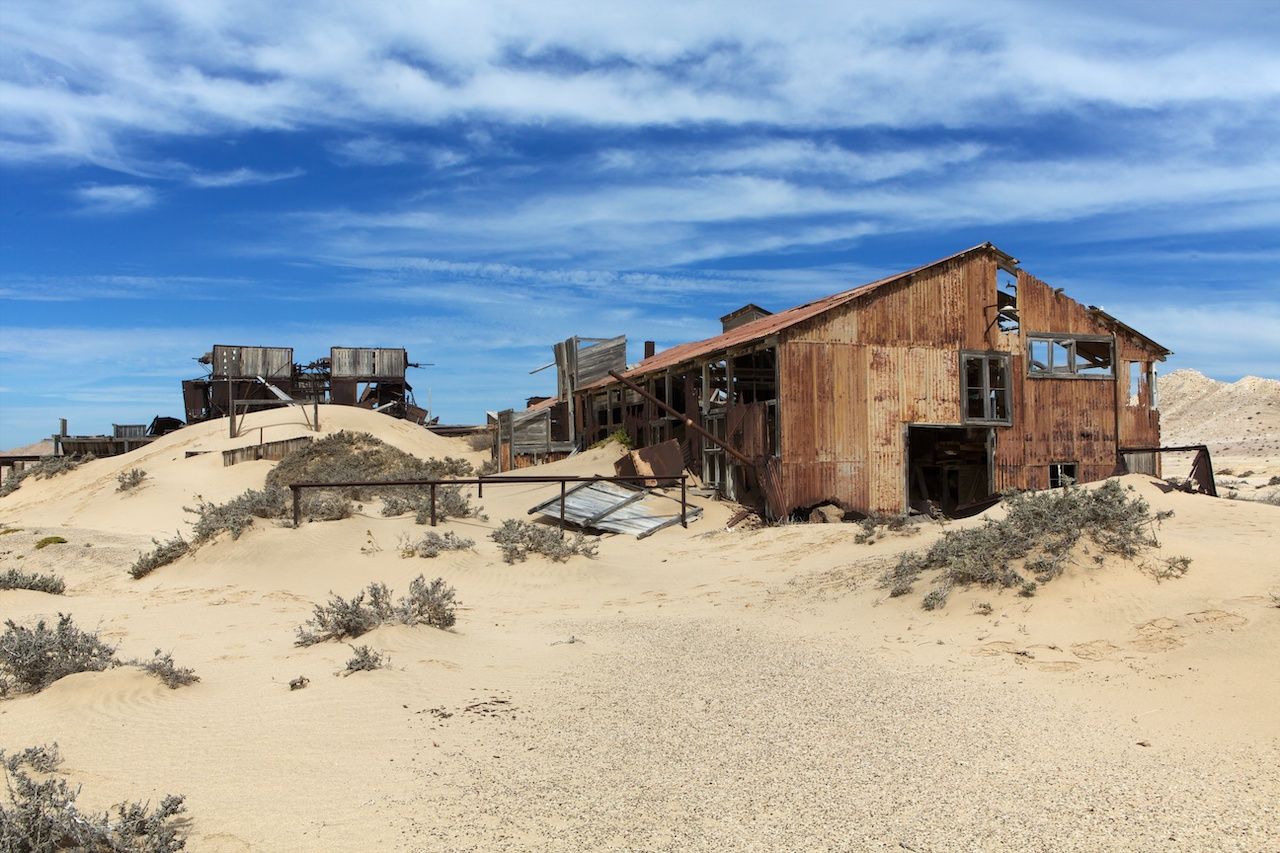 Pomona is a town in Namibia, deep inside the Sperrgebiet, an area of land on the west coast of Namibia put aside for diamond mining. Over 4 million carats worth of diamonds were discovered in 1908, triggering a diamond rush. This led to the creation of Pomona as a mining settlement. At one point, the town was home to over a thousand workers, of which 300- 400 were German and the remaining amount were black Namibian workers. The German workers had their own school, church, and bowling alley.

By the 1940s, it became much harder to source diamonds, leading the town to become completely abandoned. Nowadays, the only way people can avoid incurring huge penalties such as fines and jail time is by only entering the area via checkpoints. The town relied on trains to deliver basic items in its early years; however, now the train tracks lie in dust and the loading station is gradually being swallowed by the desert. 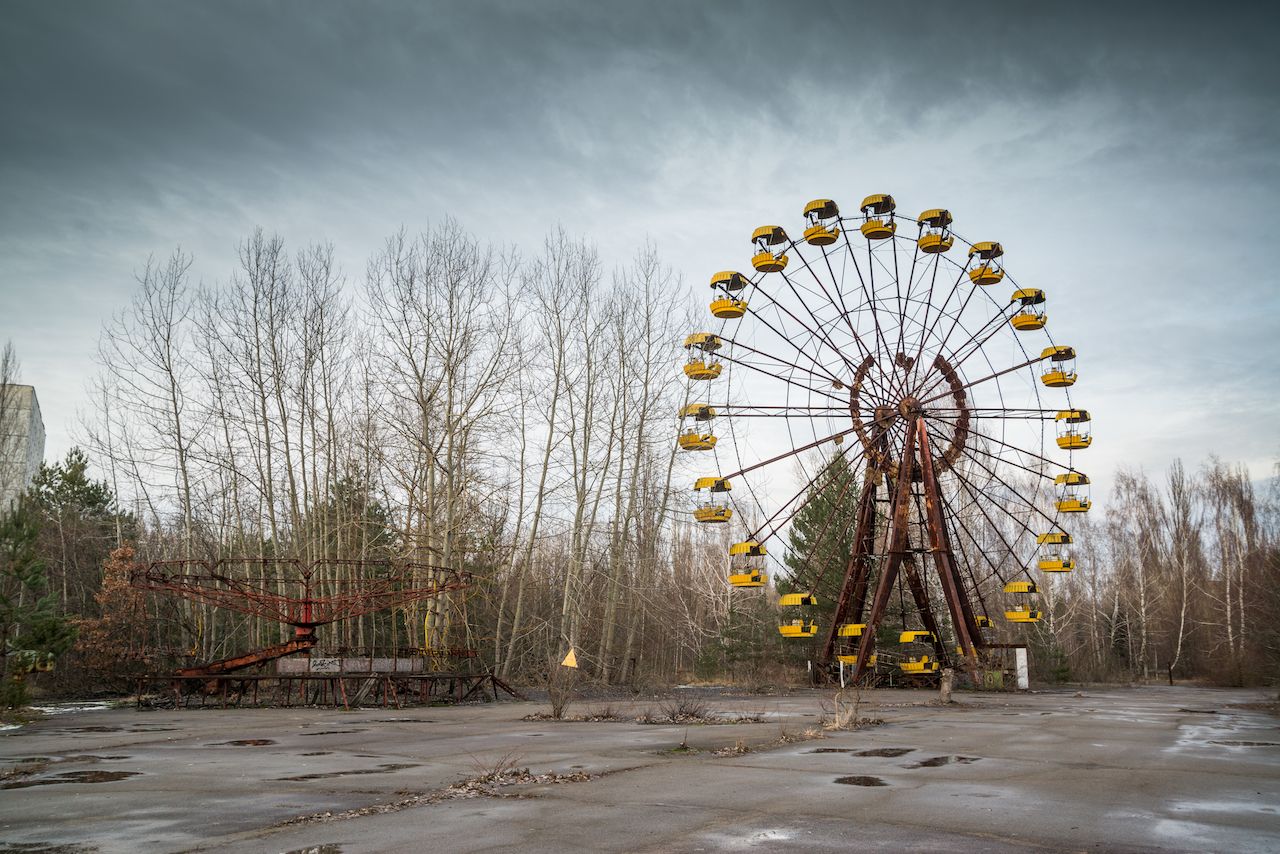 The town of Pripyat was evacuated on April 26th, 1986, after reactor number four exploded at the nearby Chernobyl nuclear plant. The town, which was originally a bustling settlement for nearly 50,000 residents, housed the families of workers at the plant. Radiation levels are still too high for human habitation, yet it is deemed safe for tourists to visit. To visit, a special tour must be booked from Kiev, which can be pricey. Nowadays the town remains frozen in the 1980s. Buildings are rotting and paint is peeling away. Personal items are left lying on desks, with pipes and metal rods sticking out of the walls. Trees can be seen growing on roofs and inside buildings. One notable landmark which appears in several photographs of the city is the Ferris wheel, which lends a ghoulish air to the images. In case you are planning to visit, there is no need to fret — after leaving all visitors granted access to the town are scanned for absorbed doses of radiation. 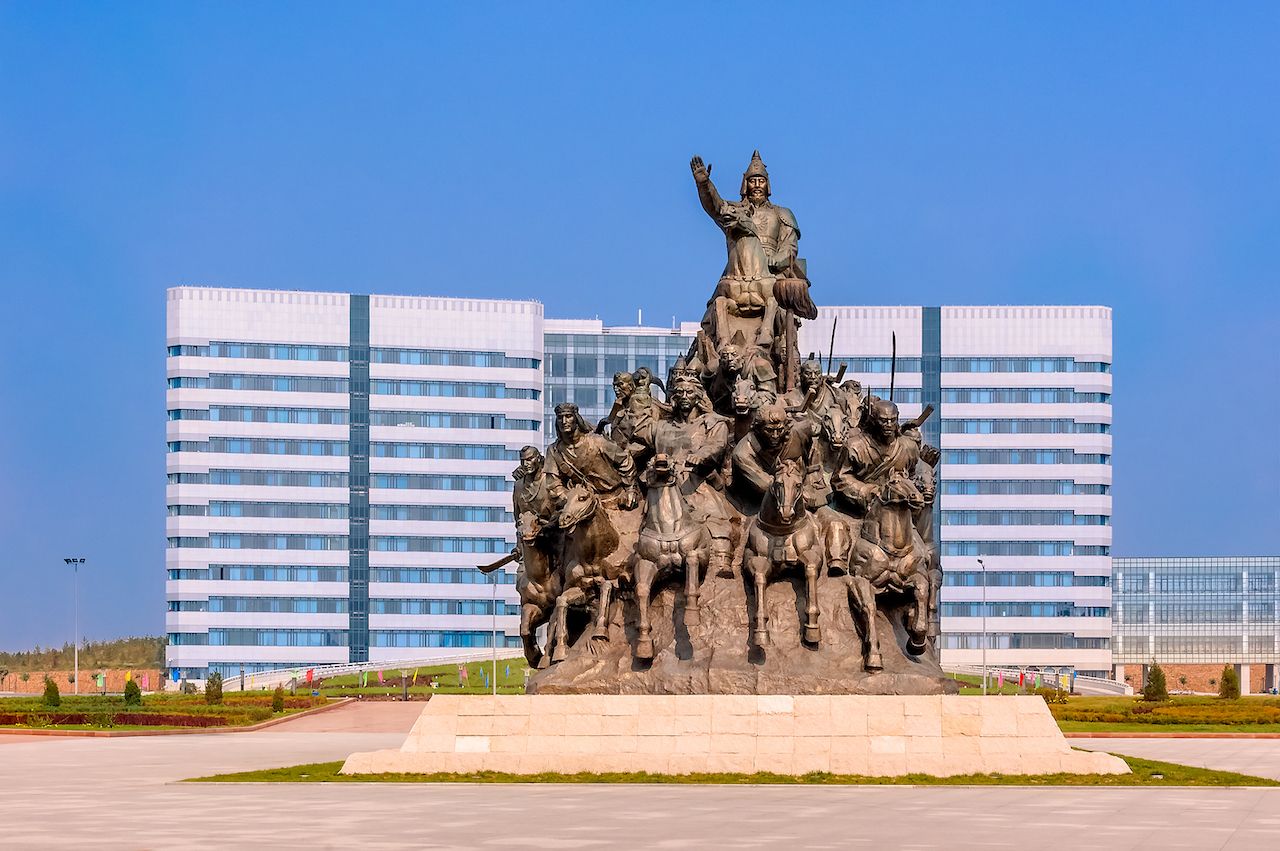 With expansive housing developments and soaring skyscrapers, the first impression of Ordos is of a buzzing metropolis. However, Ordos, in Inner Mongolia, has been termed the largest ghost town in China. It consists of new town buildings that are empty or unfinished and apartment blocks that are full of unsold flats. It was originally built to house one million people but hardly anyone lives there. Due to the great Mongolian coal rush, the municipality laid out plans for a major new town for hundreds of thousands of residents, with Genghis Khan Plaza as its center. However, it has been difficult for the government to convince people to move to Ordos. The new district is half an hour drive away from the old district, where the majority of Ordos residents still live and moving is viewed as just being too awkward. However, Ordos is trying to gain a fresh start by focusing on tourism. Will it help to bring people into Ordos? Time will tell. 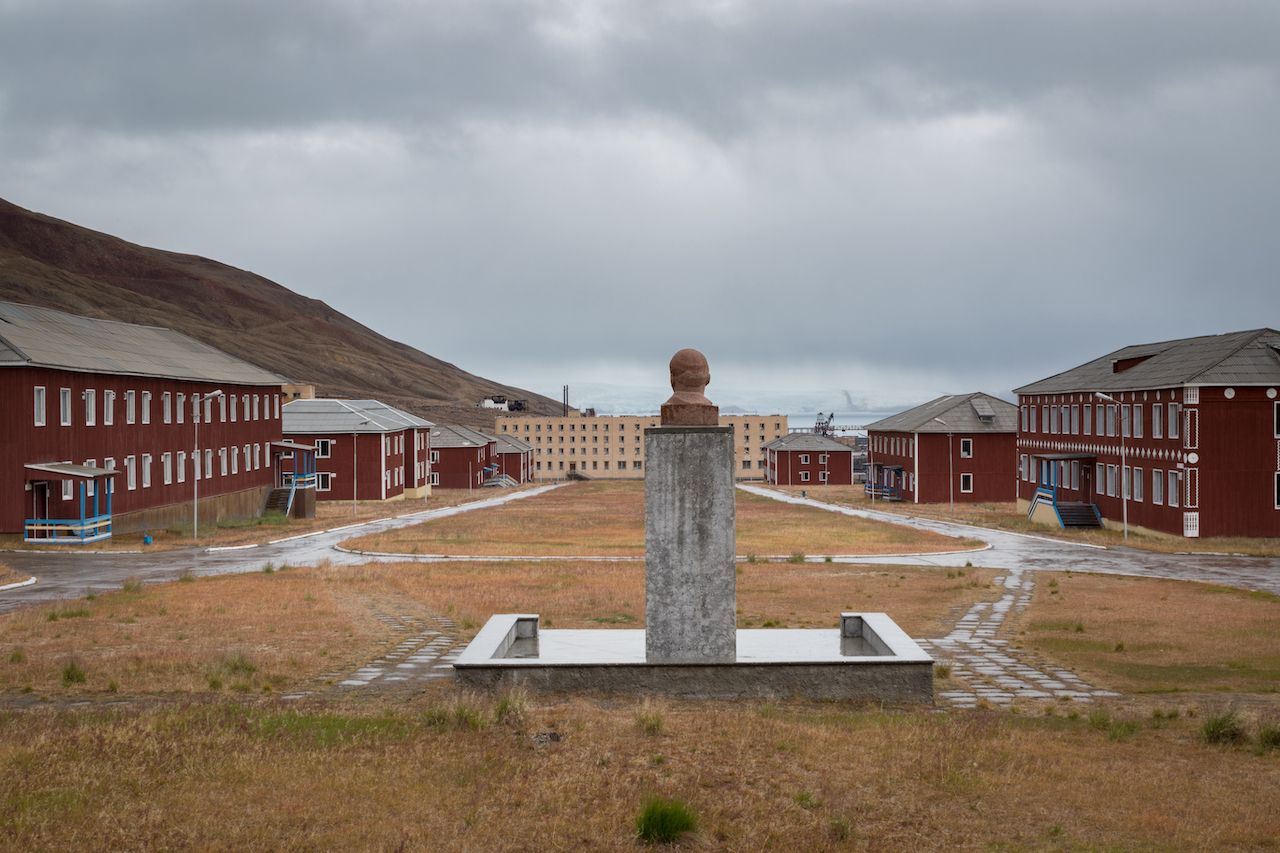 The deserted Russian mining settlement Pyramiden is located in Billefjorden on the island of Spitsbergen, Norway and has been almost entirely uninhabited since 1988. The town was founded in 1910 and was a model Soviet outpost until Communism made it a less desirable place to live. It was labelled as “inadequately necessary” and was evacuated in its entirety. It is still owned by the Russian mining company Trust Arktikugol; however to keep it thriving would cost too much money so it was shut down and was left in a state of abandonment. Furniture and relics were left behind by the departing population. Visiting the town is allowed, however going into any of the buildings is prohibited. The world’s northernmost piano is located here and has been given the moniker “Red October”. There is also a bust of Stalin to greet visitors as they arrive. 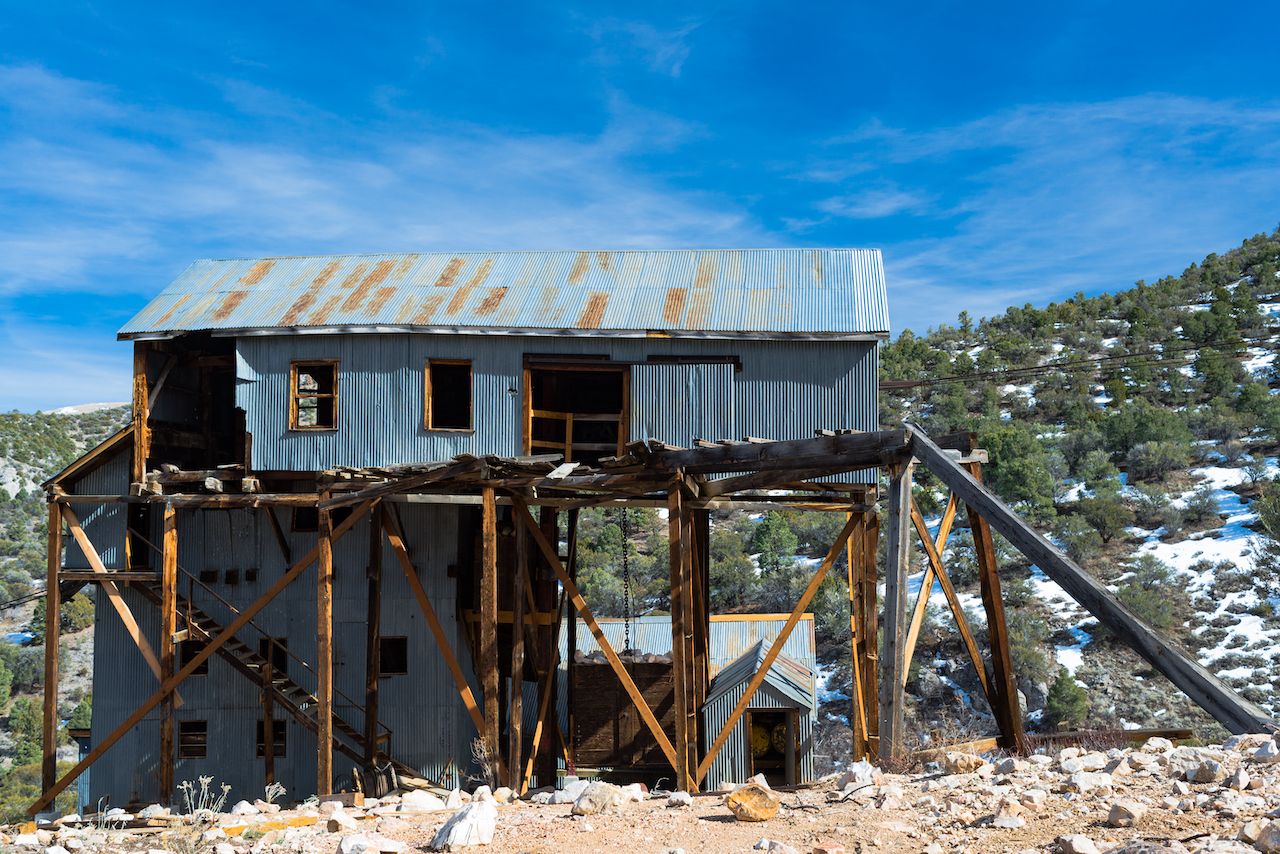 Belmont is a ghost town located in Nevada in the USA. A deposit of silver was found in the Toquima Mountains, leading to a full-scale rush. During the 1870s, it was known as a major mining town producing silver and was believed to have a population of around 10,000. It was also the seat of NYE County. In the 1880s, the mining equipment started to be moved to other areas and only a small activity was taking place by 1885. By 1889, many of Belmont’s businesses had closed and many of its residents had left town, seeking a new life, A few buildings remain of the town, for example, the old courthouse and four mill ruins. The Main Street at the heart of the business district still remains as ruins, which include those of the Cosmopolitan Saloon. The two-story building remains one of the most popular attractions for visitors to the area. 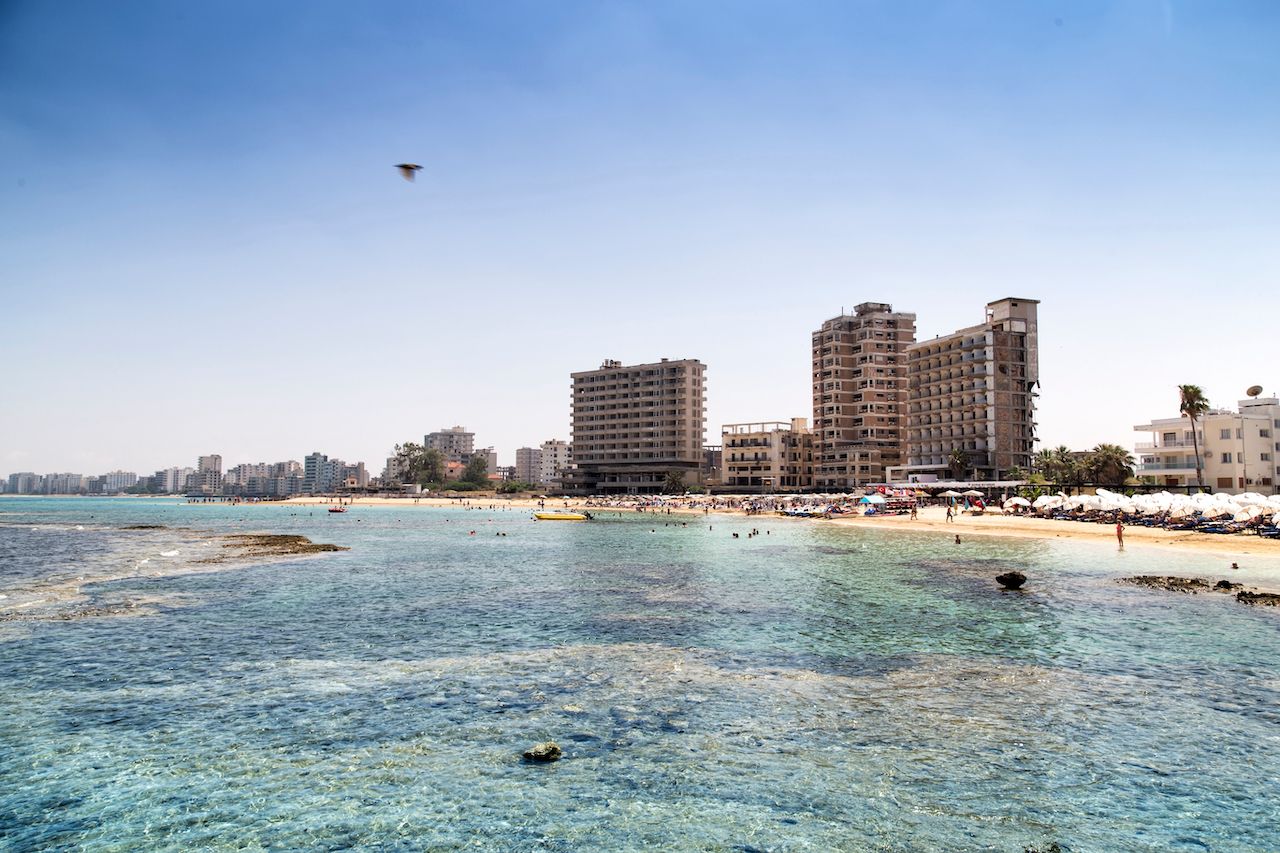 The Varosha district in Famagusta, Cyprus was, during the 1970’s, an extremely popular and exclusive tourist destination in the Mediterranean. It attracted celebrities such as Elizabeth Taylor and Richard Burton and the population rose to around 39,000. However, in 1974, the town was completely evacuated by its Turkish population, when they fled to evade the invading Turkish army after the Turkish air force bombed the town. Unlike with other parts of the island, the Turks sealed off the area and currently, only the Turkish military and United Nations Personnel are allowed to enter.

In the former tourist quarter, clothes still hang in the wardrobes and beds remain unmade. There is even a car dealership stocked with 1974 model-year cars. Hotels, restaurants, and structures are falling into decay. The area is being reclaimed by nature and there have been sea turtles spotted nesting on the district’s deserted beaches. Varosha is now considered beyond repair as the buildings are collapsing. 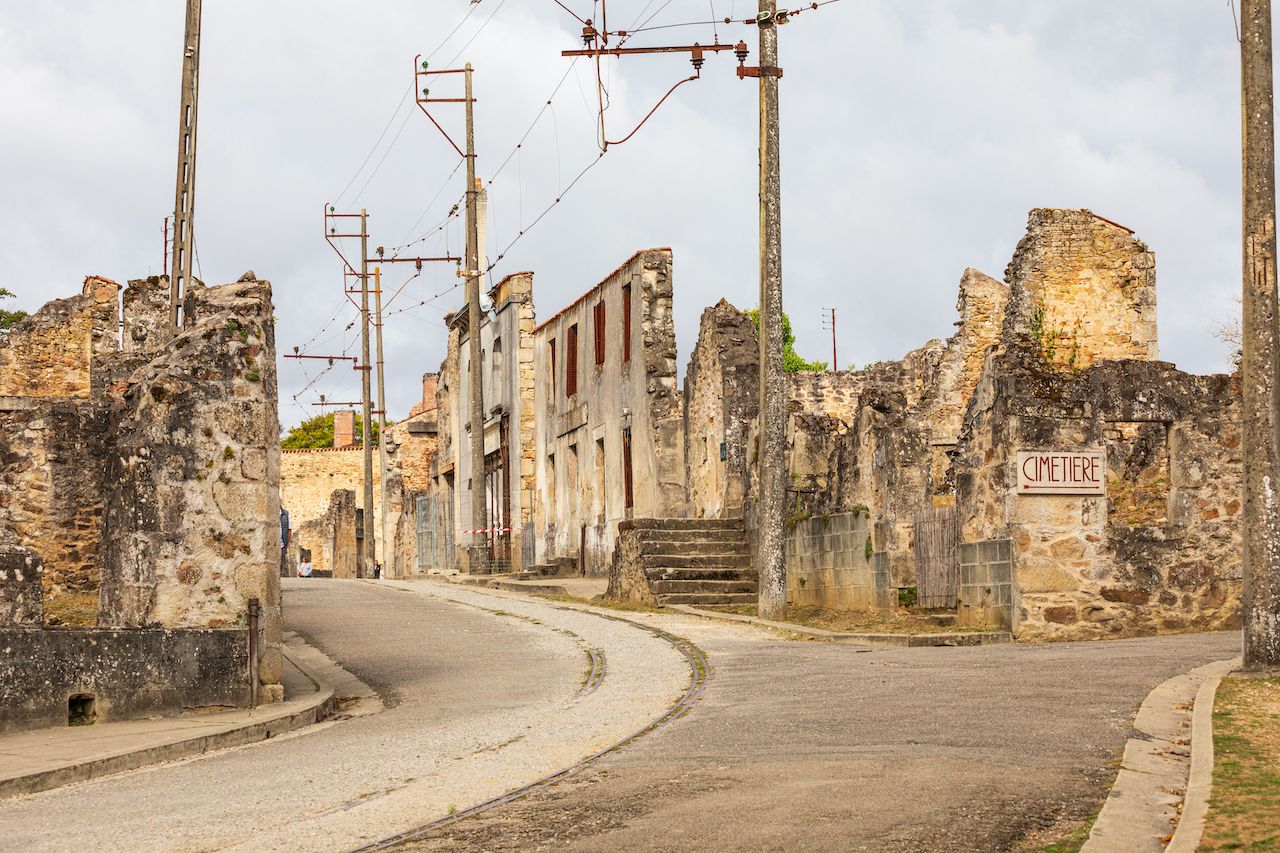 The village of Oradour-sur-Glane in France was destroyed in 1944 after 642 of its inhabitants, including 247 children, were slaughtered by the Waffen-SS. The villagers were ordered to assemble in the town square and were variously asphyxiated, machine-gunned, and burnt alive. That night the village was partially razed. No one knows yet of the reasons why this small settlement was chosen for the scene of this horror, the most likely being because Das Reich was keen to make an example of a French community and this village was the first one they encountered.

The charred remains of the village are the only ones to have been left untouched after Charles de Gaulle ordered that they should forever bear witness to the events at Oradour. The village now looks as it did at the time of the slaughter, even with a flattened pushchair, which remains where it had been found in front of the altar. 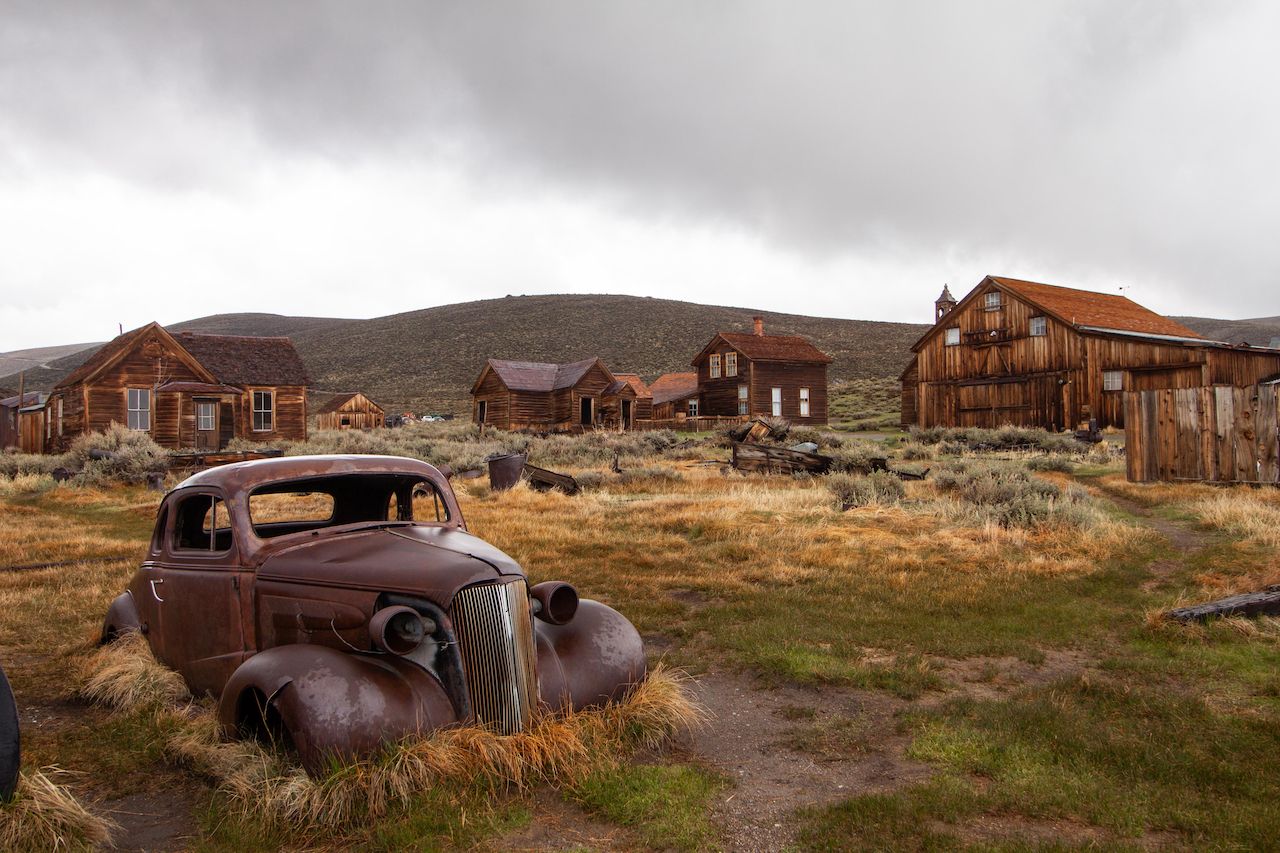 The town of Bodie is probably one of the best-preserved ghost towns in California. It lies about 75 miles south of Lake Tahoe and was originally a mining town founded for its discovery of gold in 1859. Back in 1865, the town was home to more than 10,000 gold-seekers. Despite being known for the gold discovery in earlier years, it became better known for its fighting and hard-drinking residents and its general lawlessness. By 1882, the town was declining as mining companies were going bankrupt. Two fires, one in 1892 and the other in 1932, ravaged the business district and Bodie faded into a ghost town in the 1940s. Only a small part of the town remains and looks much as it did when the last residents left. It is preserved in a state of “arrested decay” which means that nothing is repaired but nothing is allowed to fall down either. Today, tourists can visit the crumbling houses and shops that remain.

Galleries15 of the Most Haunted Places in the World [Pics]
Tagged
Insider Guides
What did you think of this story?
Meh
Good
Awesome