SET IN THE Cascade Mountains about 120 miles east of Seattle, Leavenworth is the kind of town that mixes several worlds into one. It’s a relaxing escape from the city, it’s a booming town surrounded by natural beauty — oh, and it just so happens to be perfectly modeled after an Alpine village in Bavaria.

Once a rail line stop called Icicle Flats, Leavenworth has been transformed into a destination in itself. Over a million tourists flock here annually for a little piece of Old Germany — whether it’s hiking along the Wenatchee River, dipping into Christmas treats all year round, stopping at dozens of award-winning wineries and tasting rooms, or sampling vegetarian wurst (and the regular kind, too). Washington’s “Little Bavaria” is definitely one-of-a-kind, and these are just a few incredible experiences you can have here.

1. Take your skills to the pump track 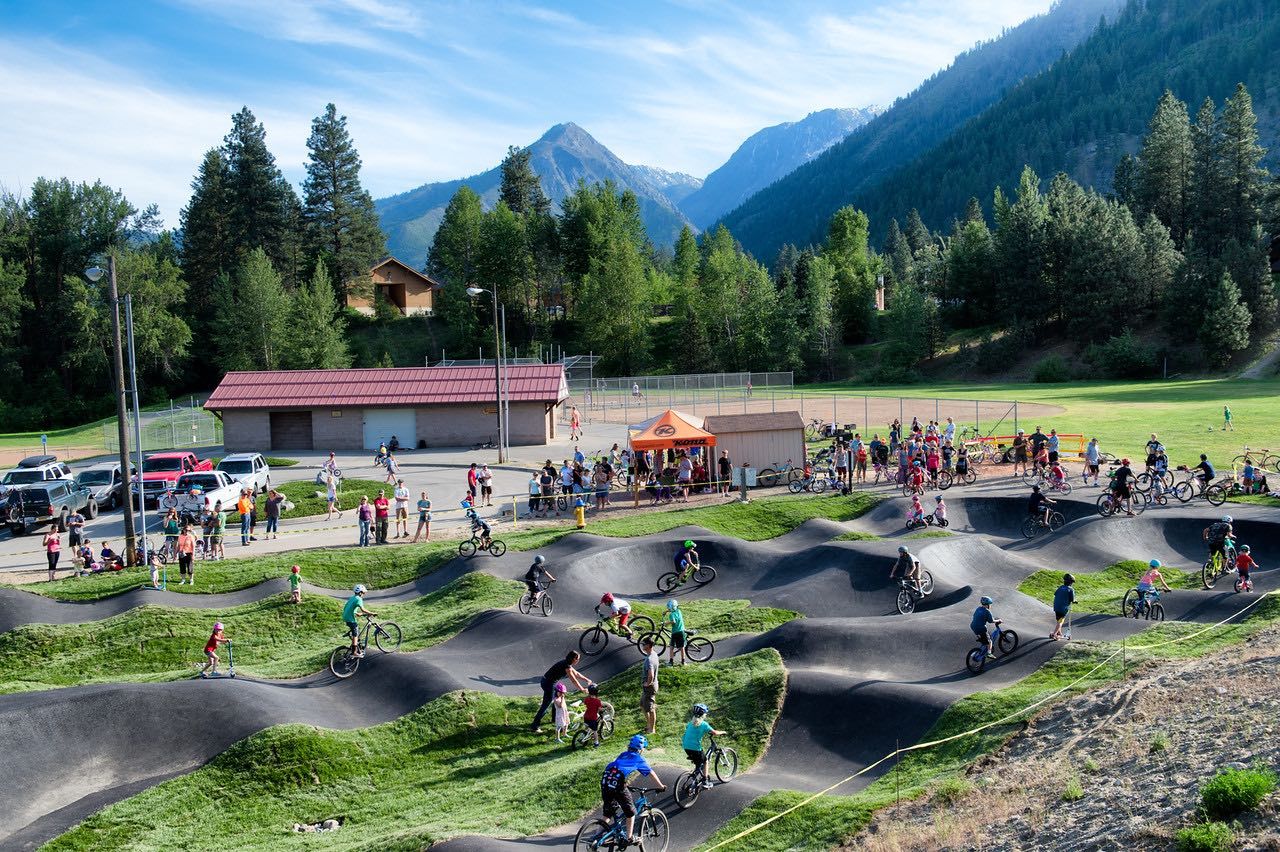 Becoming a mountain biker doesn’t mean you have to learn the hard way — the Leavenworth Pump Track is a contoured course full of berms and rollers (“dips” for the rest of us), where the aim is to use your body weight to fuel your speed. It’s a great workout and useful prep for more mountainous, rocky terrain (more on that later).

The pump track is totally free, and it’s open to skateboarders, scooterists, and roller bladers, too. Kids can handle the paved paths, while serious mountain bikers will get something out of it as well. It’s in Enchantment Park, and you won’t find anything else like it in the US.

The track has a heartwarming backstory, too. It’s the product of the Blue Lotus Foundation, which was formed in honor of a Leavenworth resident tragically killed in a ski accident. Their goal is to provide outdoor opportunities for kids in the community, and creating this family-friendly park was their first project. So grab a bike and a helmet and hit the dips.

2. Get your fill of Bier and Wurst (and gingerbread) 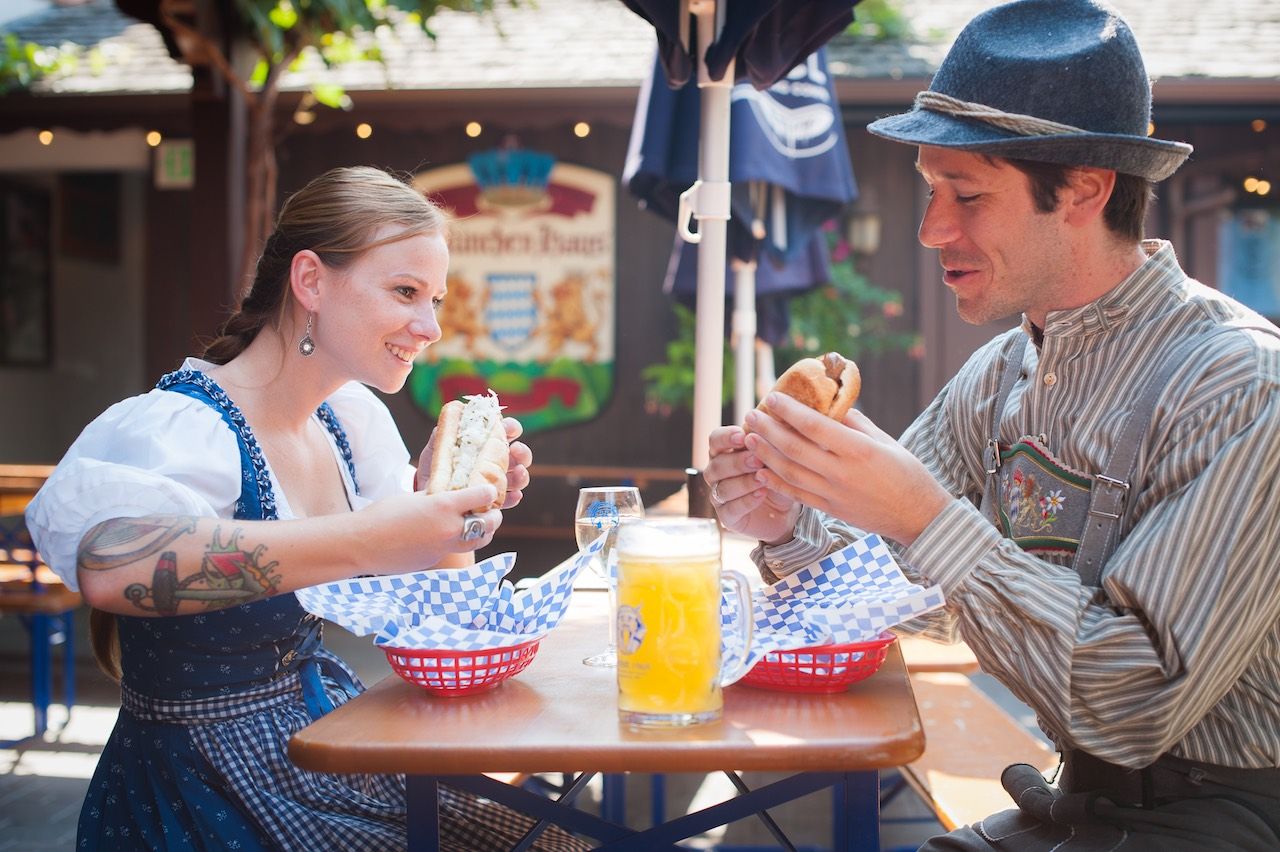 Leavenworth has gone to great lengths to make you feel as though you’re in Bavaria — without actually having to buy a ticket to Europe. When the Bavarian theme was adopted, no expense was spared in transforming the architecture into something straight out of Germany. That includes every last detail, from the flowers to the imports sold in the specialty shops to the street signs and lampposts.

Walking down Commercial Street is a multi-sensory experience. You’ll hear the occasional accordion tune, an alphorn blowing, and the striking of the glockenspiel clock. You’ll smell the unmistakable scent of grilled German sausage, and take in the colorful flower pots that line the streets. Last year, a new 95-foot Maipole was raised next to the gazebo, adding to the authenticity (and list of IG shots to score).

Grabbing a beer and a bratwurst at München Haus is a must. Their outdoor patio is the place to be, and they have a vegetarian wurst for those who want to go meatless. Afterwards, hang a right on 8th Street and a left on Commercial and grab a treat at the Gingerbread Factory, where Christmas is celebrated all year. 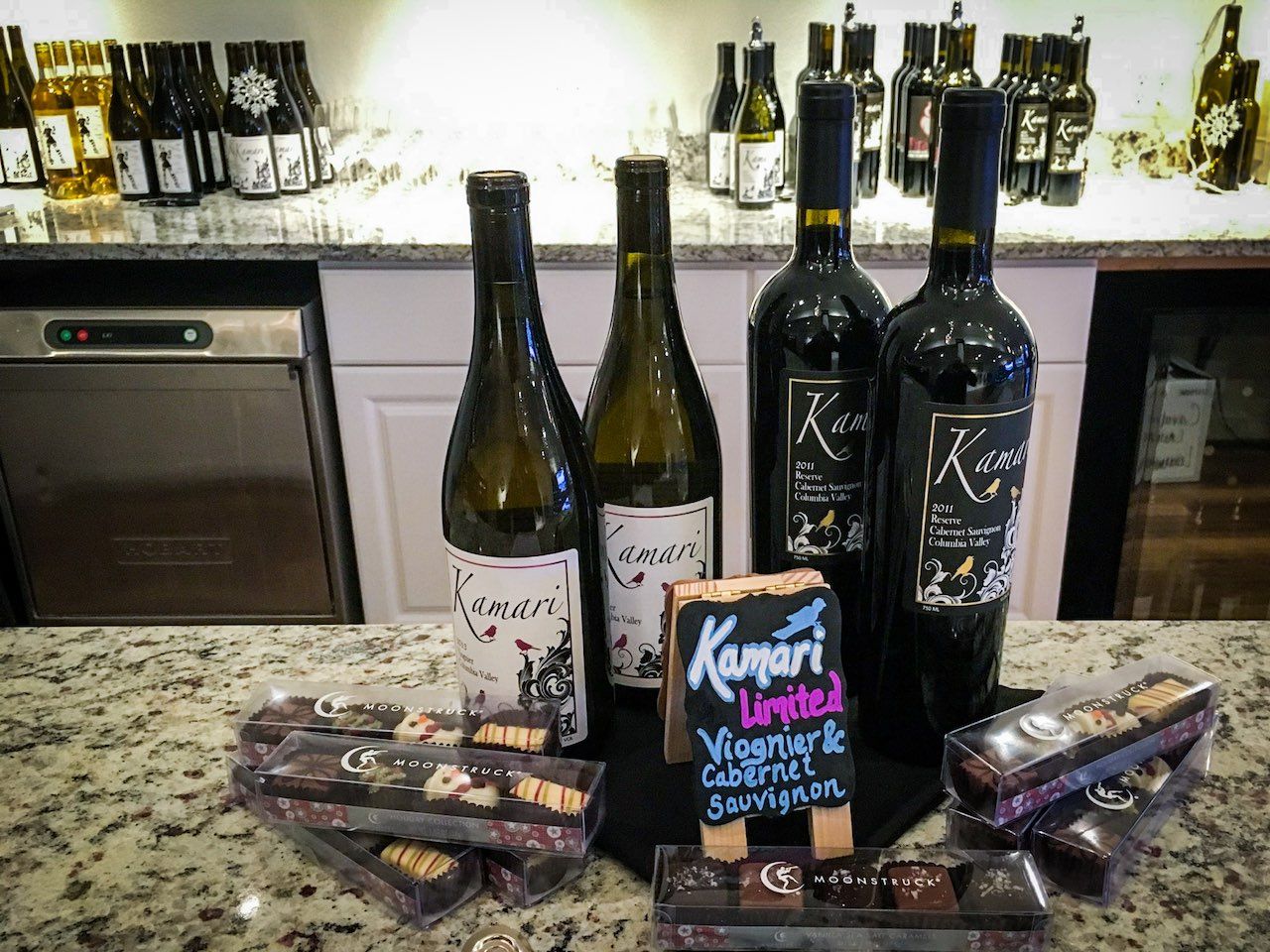 Leavenworth is striking distance to some of Washington’s best-rated wineries, and the downtown area alone has 20 tasting rooms. Hop on Front Street and don’t be ashamed if you just want to walk it up and down for hours — places like D’Vinery, Baroness Cellars, Swakane Winery, and Kestrel Vintners will keep you busy.

Each has its own character, so obviously you’re going to need to hit as many as possible. WineGirl Wines, for example, was founded by winemaker Angela Jacobs and reflects her charismatic personality, while A Taste of Icicle Ridge Winery tasting room has an interesting backstory — when you walk in, you’re actually walking into their home. Their 5,000-square-foot log cabin home, but still. The owners built it themselves, hand-notching the wood from trees cut behind their pear orchard, and even using rocks from local rivers. The wine is definitely worth a stop — but the ambiance of the space is what really seals the deal.

4. Stroll through 50 years of hand-painted murals 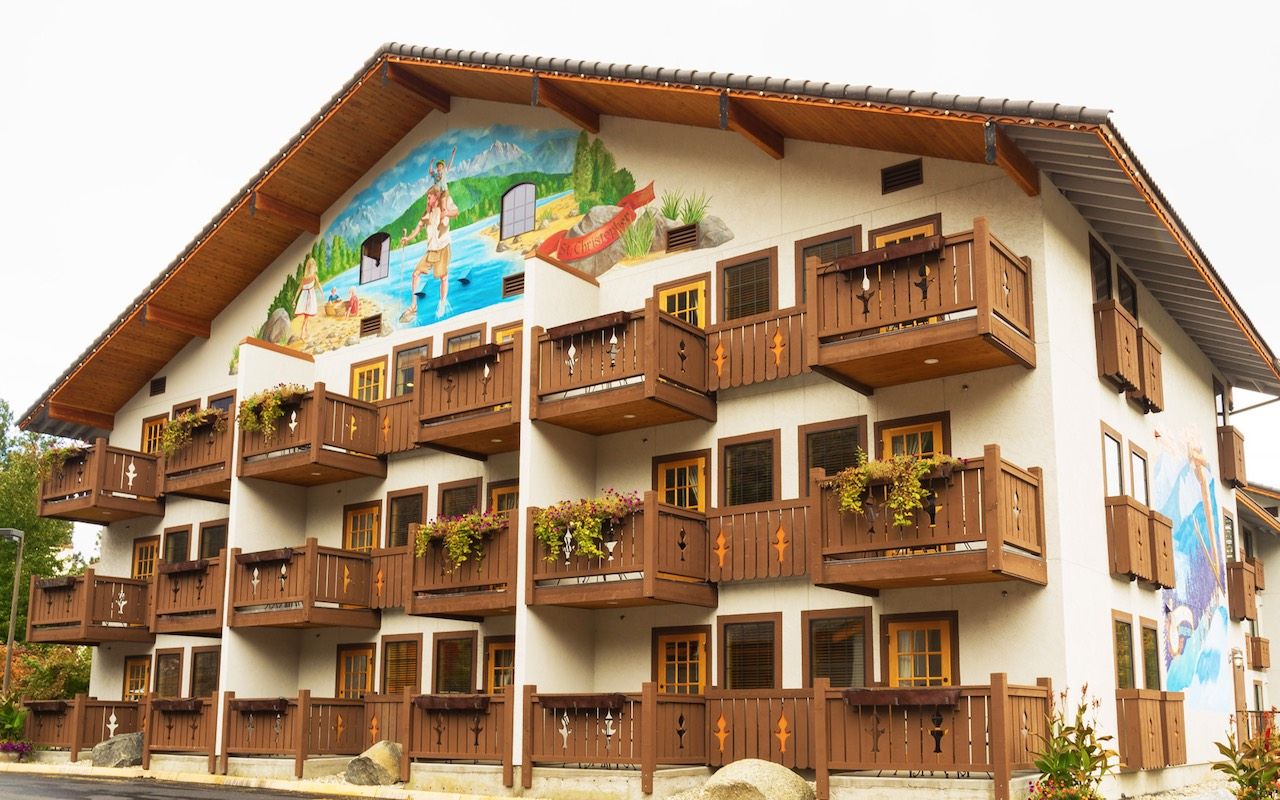 After you’ve met your wine quota, slow it down with your own self-guided art walk. Wander around the downtown area and you’ll find over two dozen hand-painted murals — including work by German artists — that add to the Bavarian feel of the town. Local artists Amanda and Rusty Gibbs have some great murals on display in Leavenworth, too. Head toward the building between the Hat Shop/Wood Shop and the Leavenworth Boutique to see their work.

5. Take in the mountains by catching a show 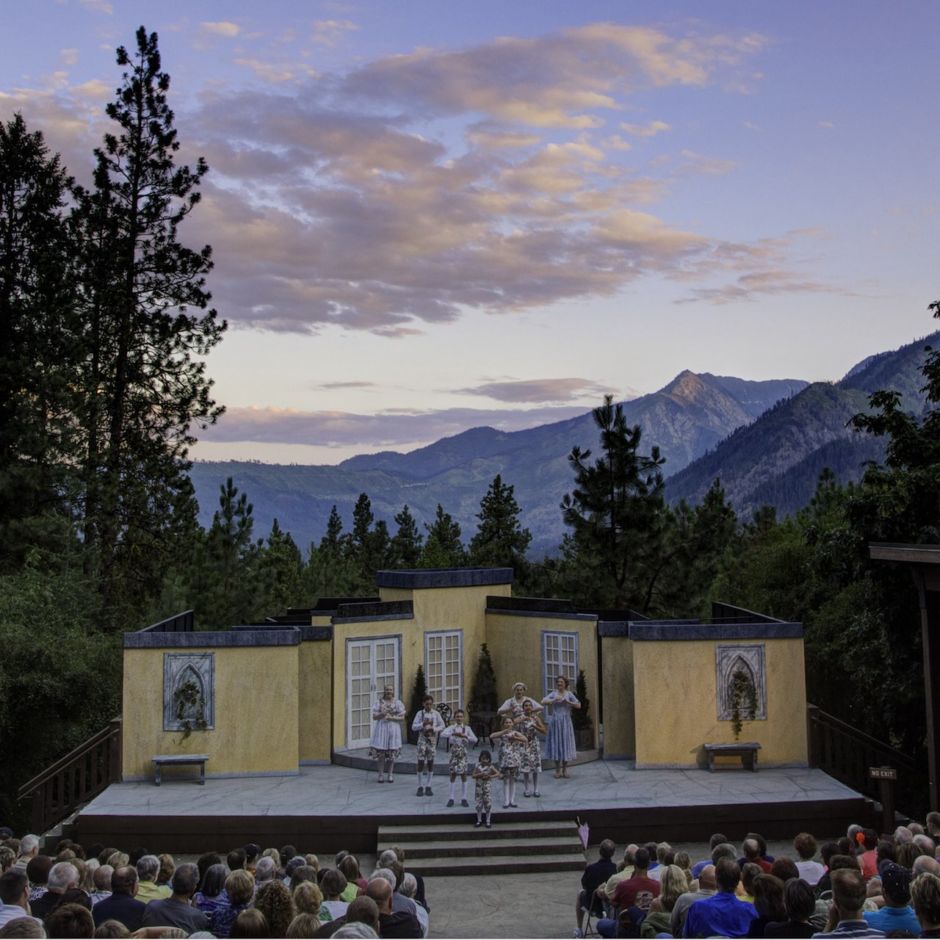 When the weather heats up, the Leavenworth Summer Theater presents a series of Broadway and holiday shows on their stage under the sky. There are two venues, the Leavenworth Ski Hill Amphitheater and Hatchery Park Amphitheater, and the shows typically begin at dusk. They all have live orchestras, and the Hatchery Park stage has the stunning Icicle Ridge as a backdrop — a particularly beautiful (and hike-able!) area of the Cascades. (Think ponderosa pine, plenty of waterfalls and wildflowers, and maple forests up until the peaks turn into snow.) 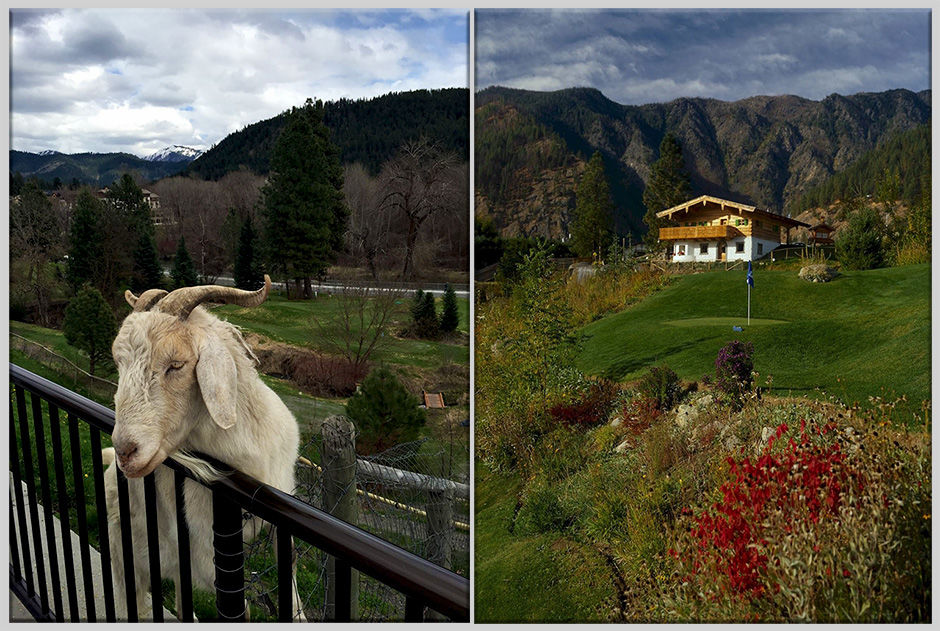 The Enzian Falls Championship Putting Course, owned by the Enzian Inn, features 18 holes of natural bentgrass greens, just like you’d find on a championship course. The exception: Here, you’ll see grazing goats roaming alongside the golfers. If mom and dad got to have a winery day, this one will probably top the kids’ lists. Make friends with Snowhopper, Brigitta, and Snowball (the resident goats) and your Instagram account will never be the same.

And just like practically everything else in town, this hillside course has panoramic views of the Wenatchee River, waterfalls, and the surrounding mountains. Your golfing photos have never been a hit until now.

7. Don’t see The Nutcracker — see all the nutcrackers 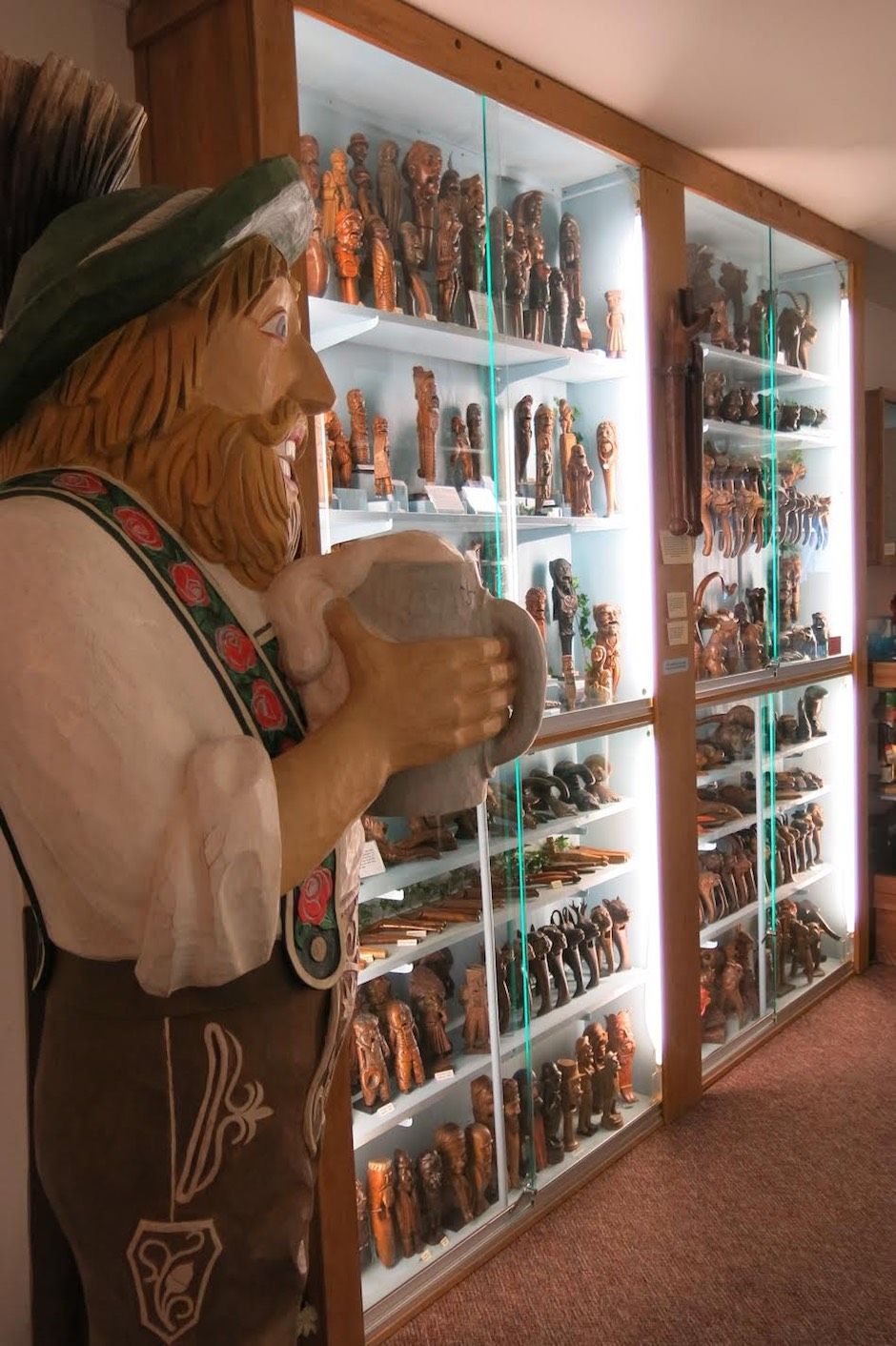 If beer, sausage, flower boxes, half-terraced houses, and mountain views haven’t escorted you into a Bavarian vibe yet, enter the Leavenworth Nutcracker Museum. It’s an entire world of intricately crafted nutcrackers, tucked away in an upstairs corner on Front Street. With over 6,000 nutcrackers — the oldest date back to Roman times — this eclectic collection gives you the best kind of history lesson.

The museum is open daily, 1-5pm, all year long. Kids are obviously welcome, and they can make their own nutcrackers on July 1, a.k.a. Nutcracker Day.

8. Leave the car at home 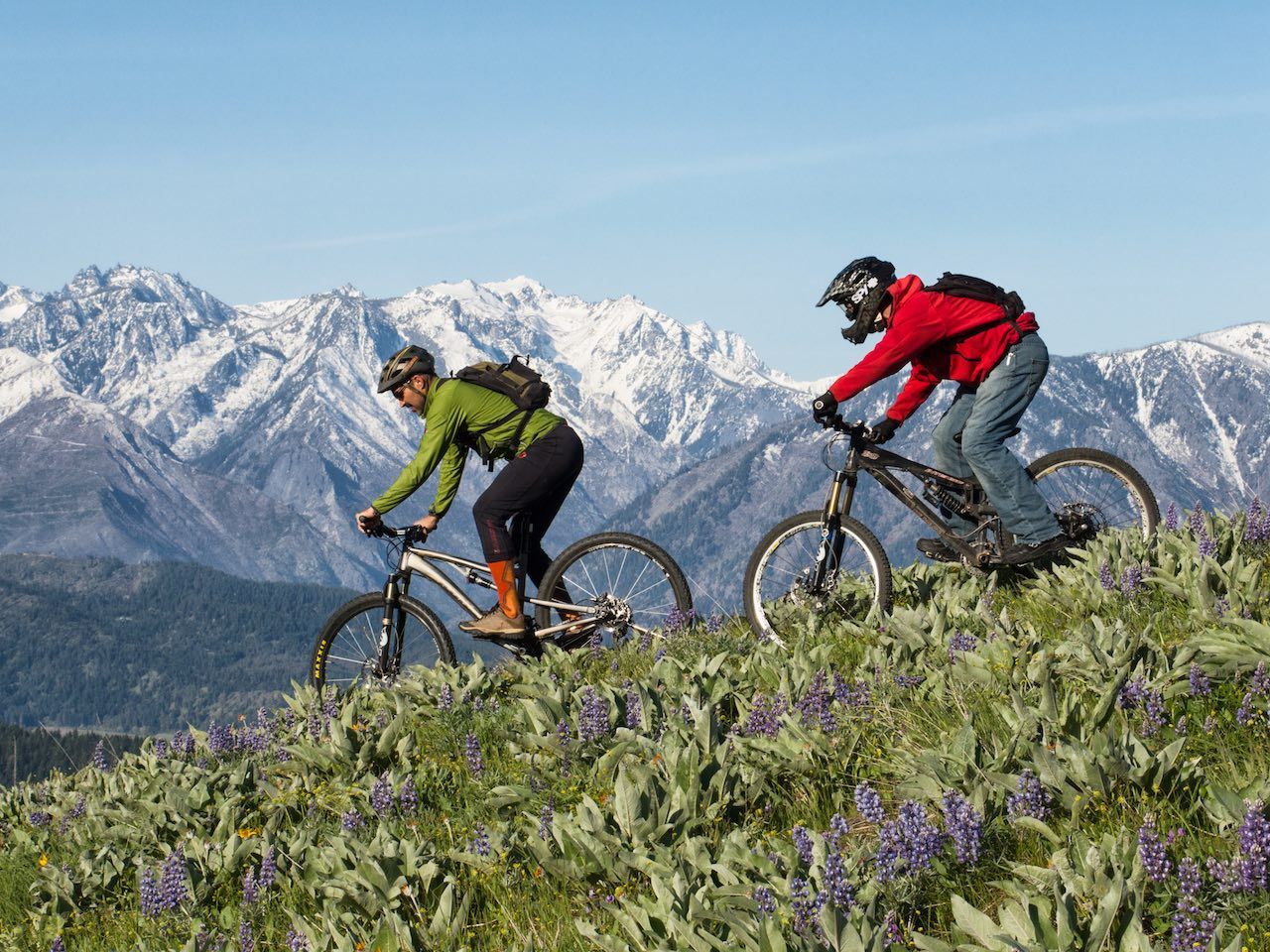 With 700+ miles of trails located within striking distance of the Bavarian village, Leavenworth is awesomely explorable by foot, bicycle — even horse. The three-mile Waterfront Park Trail is the best-kept local secret, with paths winding along the Wenatchee River and through quiet forest practically built for bird watching. The slightly more challenging six-mile Lake Minotaur Trail is more of a thigh-burning uphill adventure. And don’t forget the aforementioned Icicle Ridge — which is definitely not as cold as it sounds. The entire thing is six miles, but there’s a natural stop at about the two-mile mark for relaxing, picnicking, snapping aerial shots of the town, and hiking back down to the bottom.

When temperatures cool and the snow starts to fall, the outdoor adventures don’t stop. Nordic skiing and snowshoeing are popular ways to get around in the wintertime, with trails of varying lengths for all skill levels. The snowshoe trails at South Park are a good place for beginners — an almost-two-mile loop eases along the Wenatchee and puts you on the floor of the Cascades in Lake Wenatchee Valley.

9. Float the river or ride the rapids 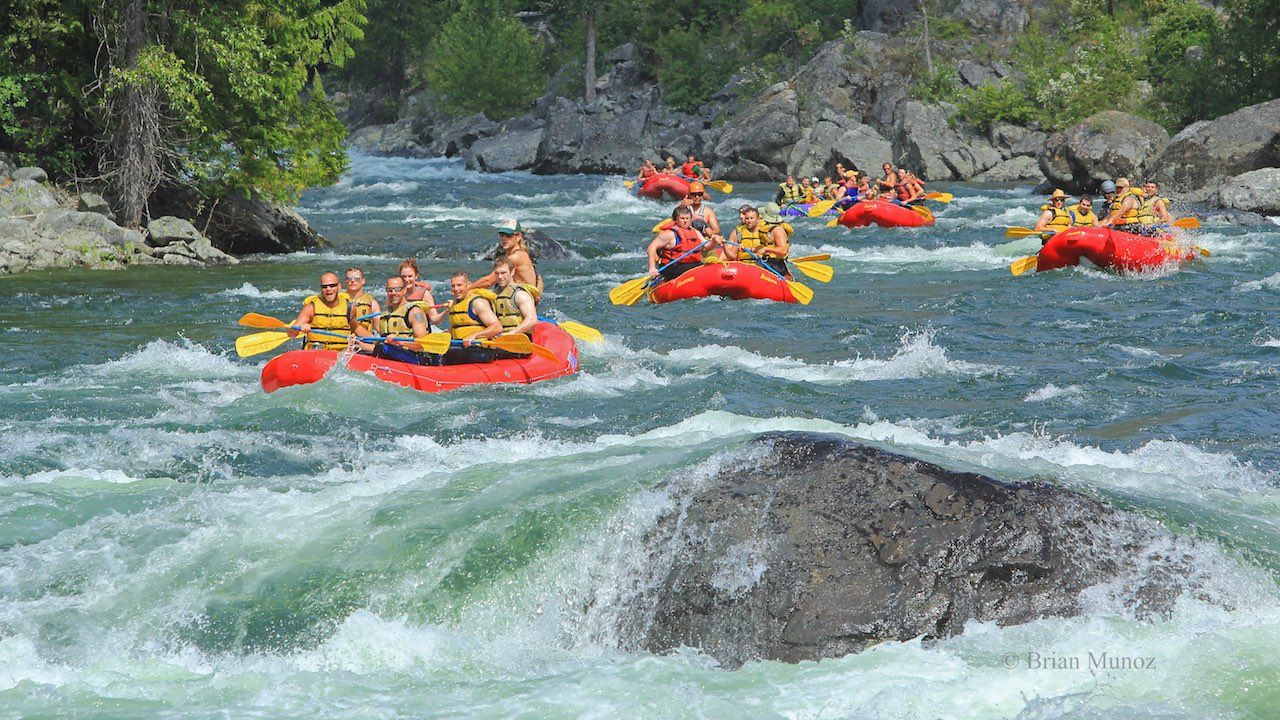 Rivers and streams frame Leavenworth on nearly every side, making for plenty of options. The Icicle River is great for a lazy float to downtown Leavenworth, while an adrenaline rush can be found on the Wenatchee River and its Class III rapids (though you’ll also find plenty of Class IIs for anyone who’d rather stay dry or take their kids along). And if you’re really feeling bold, there are the Class IV “Triple Shot” and “Tinley Falls” rapids in Tumwater Canyon.

No equipment or expertise? No problem. You’ll find a long list of outfitters offering guided tours in the area, and Leavenworth Mountain Sports has all the rentable gear you could ask for, from stand-up paddleboards to kayaks and wetsuits.

10. Sleep where art and nature collide 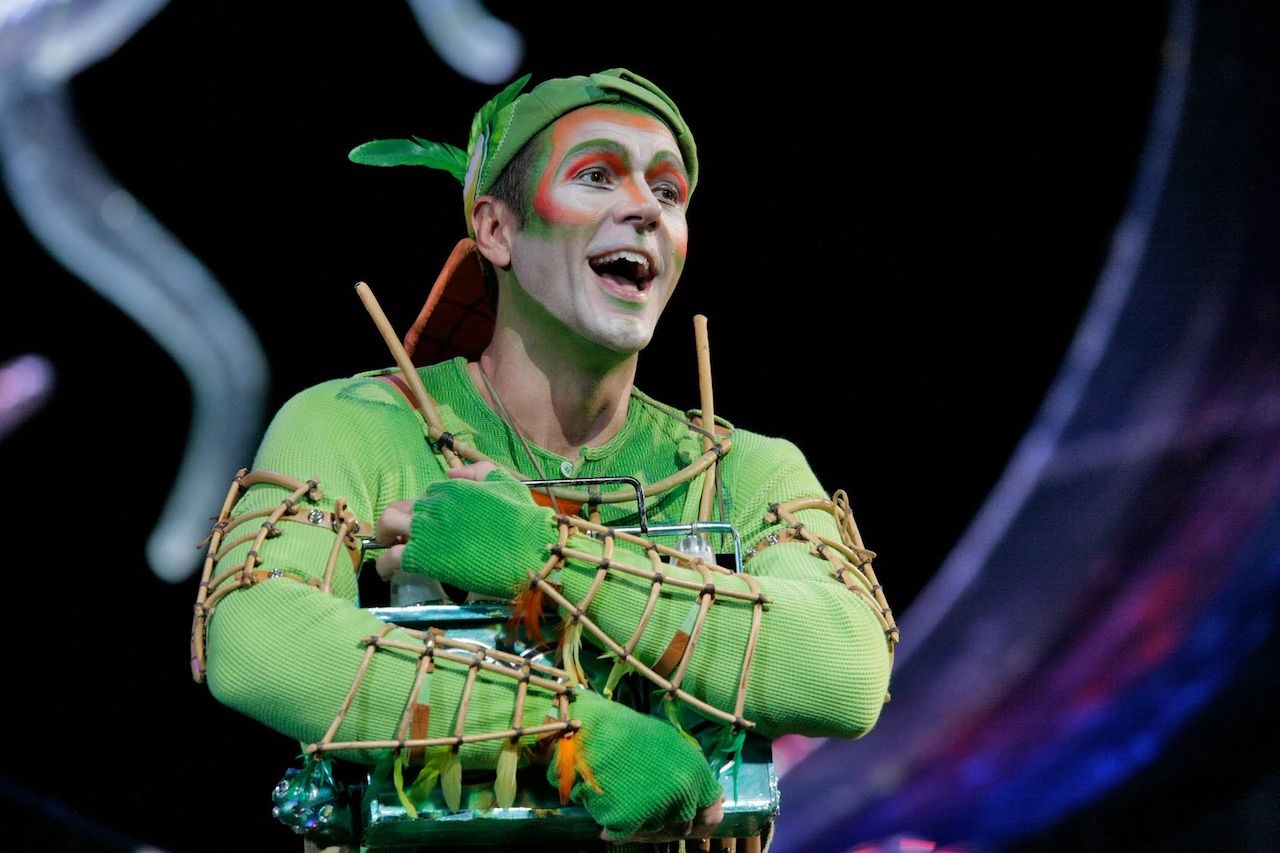 Photo: Ken Howard for the Icicle Creek Center for the Arts

The Icicle Creek Center for the Arts has taken on a responsibility bigger than itself. Yes, it’s a space dedicated to the performing arts, but it also aims to grow the community’s appreciation of nature and integrate the arts and the environment. The mountainous setting of Leavenworth is the perfect place for such a creative space. They host more than 100 performances a year — from Shakespeare to concerts to opera — as well as year-round educational programs for all ages.

Located slightly off the beaten path on Icicle Road, the drive from downtown Leavenworth to the 13-acre campus is short and scenic. You can catch a performance of some sort almost every evening, and they have eight cabins available for overnight stays that sleep up to six people — picture getting snowed in, settling into a good book in front of the fire, and looking out the window to giant flakes blanketing the Cascades.

11. Eat the best pear of your entire life 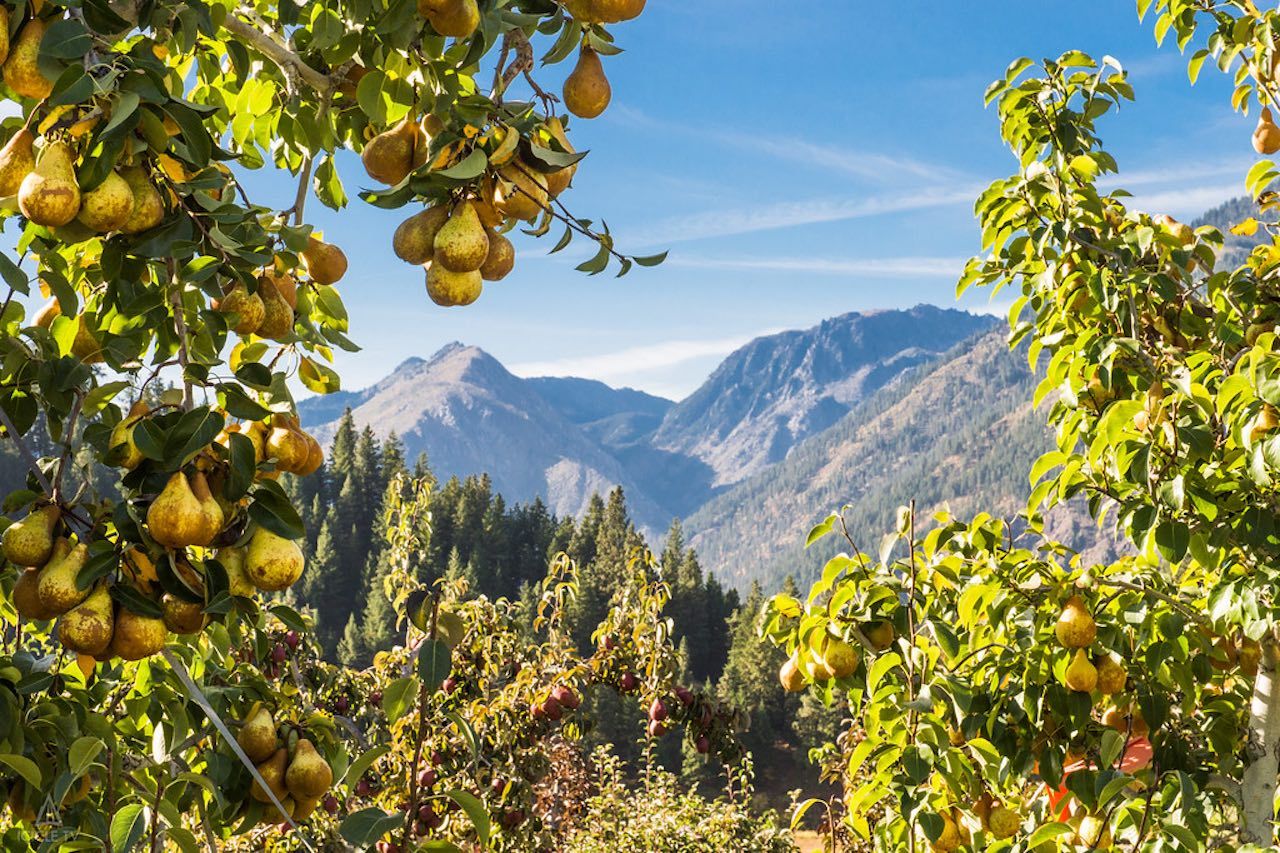 This part of Washington happens to produce the some of the highest numbers of organic pears in the nation. Pear Month is celebrated every April, kicking off with a hearty “prost” to the pear.

For the entire month, downtown Leavenworth turns into a total “pearadise” (couldn’t resist). Local restaurants, wineries, and breweries will have rotating menus of tasty pear dishes, cocktails, and even beer and wine. Highlights include the Pear Pomantini at Baren Haus Restaurant, pear sorbetto at Viadolce Gelato, gingerbread pear cookies at Gingerbread Factory, and the pulled pork with pear chutney at Der Hinterhof — you haven’t had anything quite like it.

This post is proudly presented in partnership with the Leavenworth Chamber of Commerce.
Tagged
Insider Guides
What did you think of this story?
Meh
Good
Awesome

How To Spend a Perfect 48 Hours in Leavenworth, WA This Fall

17 Images of Leavenworth, WA We Can't Stop Looking At

Leavenworth, WA Might Just Be the Top Winter City in America. Here's Proof.

13 Reasons You Need To See Leavenworth, WA, in the Fall

9 Outdoor Adventures To Check Out in Leavenworth, WA

9 Food and Drink Experiences To Have in Leavenworth, WA Before You Die