WE IN SASKATCHEWAN take a great deal of pride in our home province. Yes, we’ve got those famed wheat fields of the southern prairies — but there’s also the lesser-known lakes and forests of the central and northern parklands. Saskatchewan’s landscape is nothing if not diverse, complete with plunging chasms and soaring cliffs, shifting sand dunes, and the sharpness of the Canadian Shield. Below, you’ll discover just a few of the amazing places you had no idea were hiding right here. 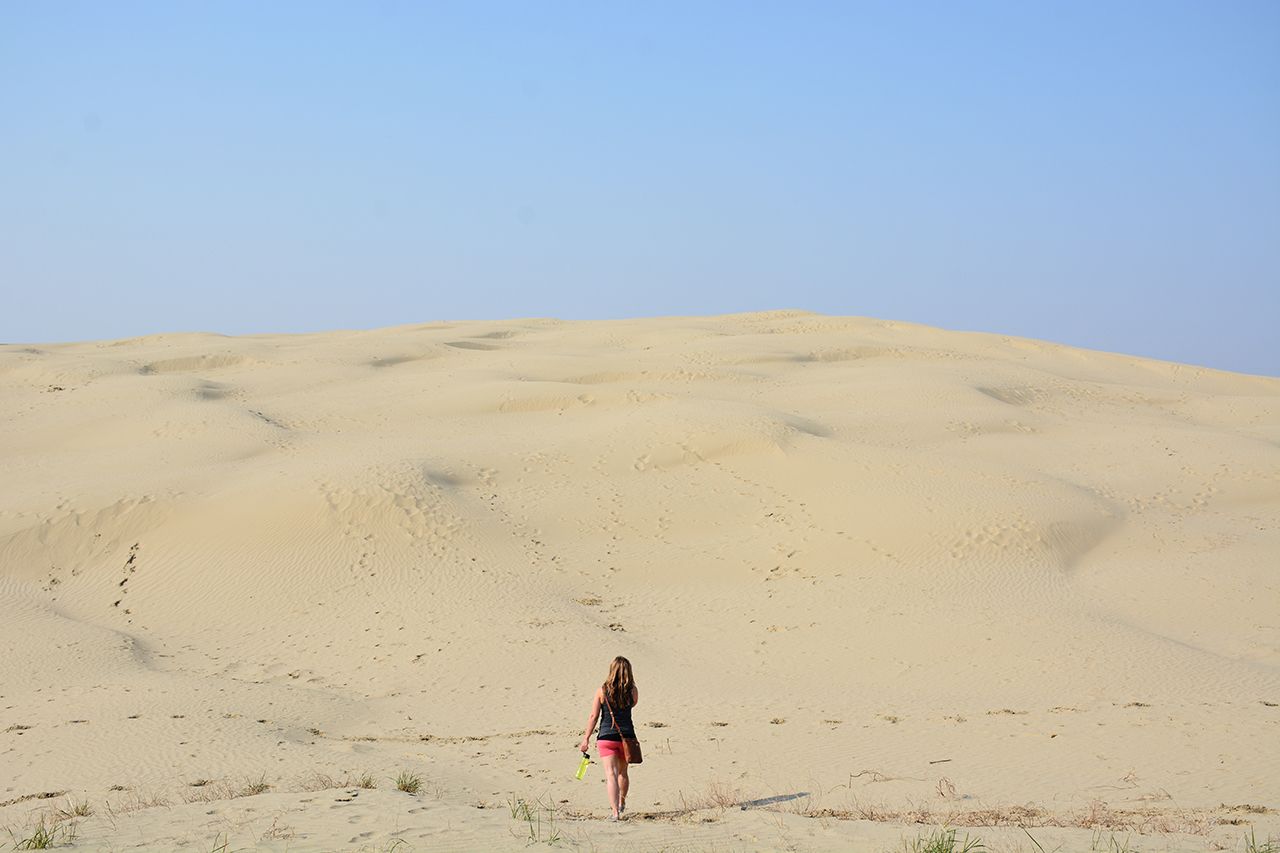 Surprisingly, some of the largest sand dunes in Canada are in Saskatchewan. The Athabasca Sand Dunes, in the far north, are the largest active dunes in the country, and are perhaps the northernmost dunes in the world. As in, very far north — meaning they’re also not that easy to get to.

The wind works waves into the sand, which shines white in the sunshine and reddish-gold in the evening. It’s a peaceful place for a walk, and to watch the more than 150 species of birds in the area. You can try to capture an image of this seemingly endless expanse of sand and sky, but it will never all fit in the frame.

Forests of spruce, pine, birch, and aspen are spread throughout the central and northern parts of Saskatchewan. Gorgeous greens in the summer, golden yellows in the autumn — these woods are breathtakingly beautiful and calming…all except for the reputedly haunted

Nowhere else in Canada do trees like these exist — except maybe in the films of Tim Burton. The tangled trunks and bent branches of these aspens snake along the ground, twisting and turning, curving and contorting, their pale bark with its black scabs like the gnarled hands of a wicked witch reaching out to grab you as you walk by. Walking through these misshapen woods is a truly surreal experience — and perhaps an even better IG backdrop.

A researcher at the University of Saskatchewan says the trees (or tree — aspens are clonal, so the grove is almost certainly one huge organism) are the result of a genetic mutation. But what caused it? Theories abound. Whatever the reason, these weird woods are sure to leave you both captivated and disconcerted. 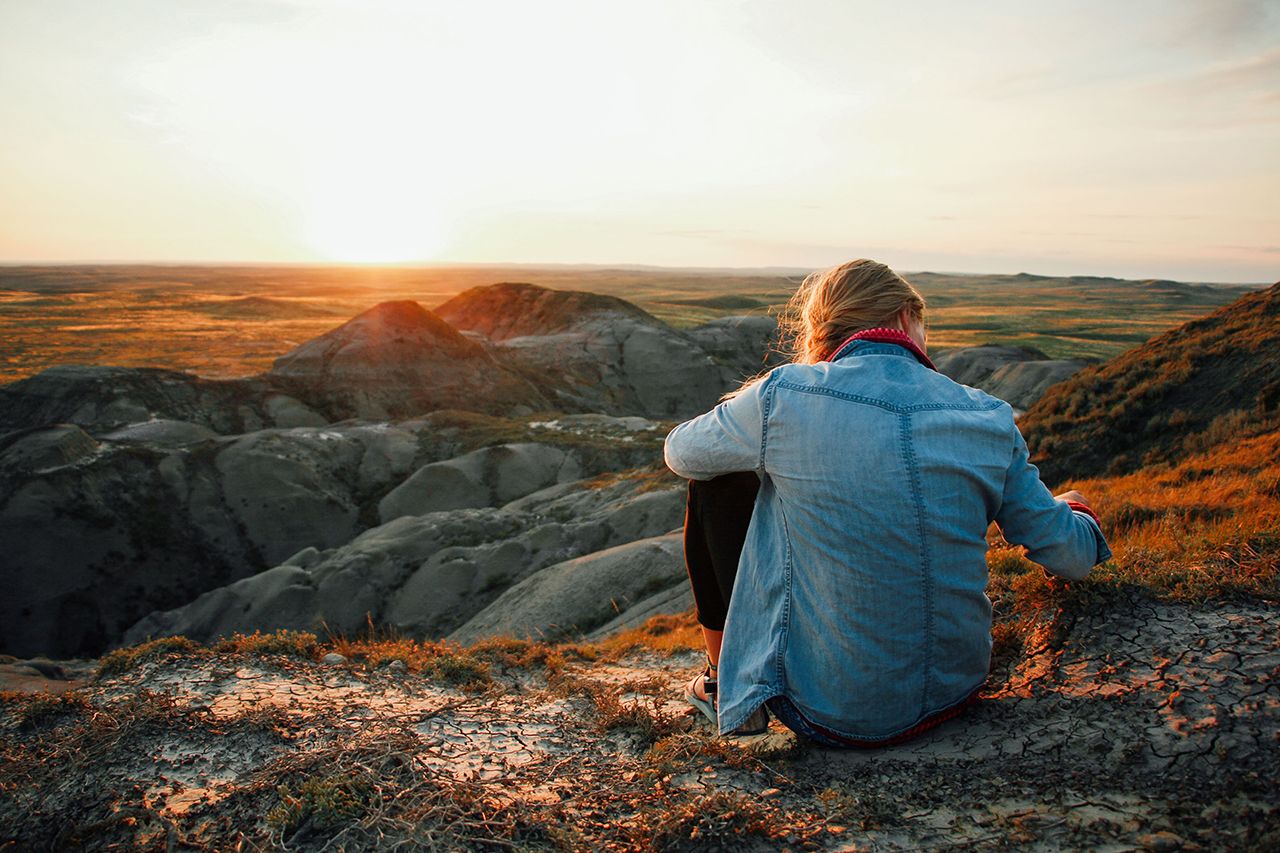 The buttes and badlands of southern Saskatchewan hold a beauty all their own, and the best place to behold it is in the Killdeer Badlands in the East Block of

Hiking through this dry and dusty region, you may run into mule deer or short-horned lizards, or see a golden eagle fly overhead. You’re also likely to stumble on some dinosaur bones or marine fossils from the area’s prehistoric past. It’s these big bones and haunting hoodoos that give this area of the Badlands its name: Valley of 1,000 Devils.

PS: There’s quicksand in this part of the park, so pick your path carefully! 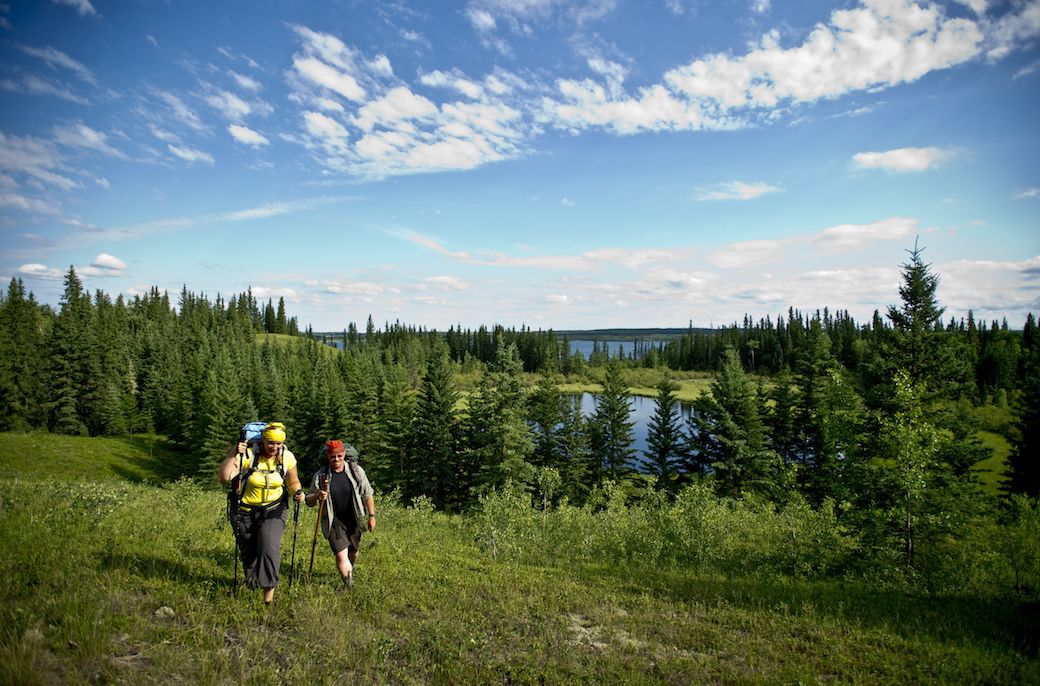 You’ll pass through forest filled with jack pines, white and black spruce, birch, and aspen that’s home to animals including moose, wolves, bears, and squirrels. The trail also wanders through muskeg, wetlands, and river valleys; it crosses meadows filled with wildflowers and traverses a beaver dam. There are eight front-country and nine backcountry campsites along the route — some on high cliffs, others on sandy beaches. Thanks to the many convenient access points along the way, you can choose to hike only part of the trail or do the whole thing.

5. The Lighthouse at Cochin 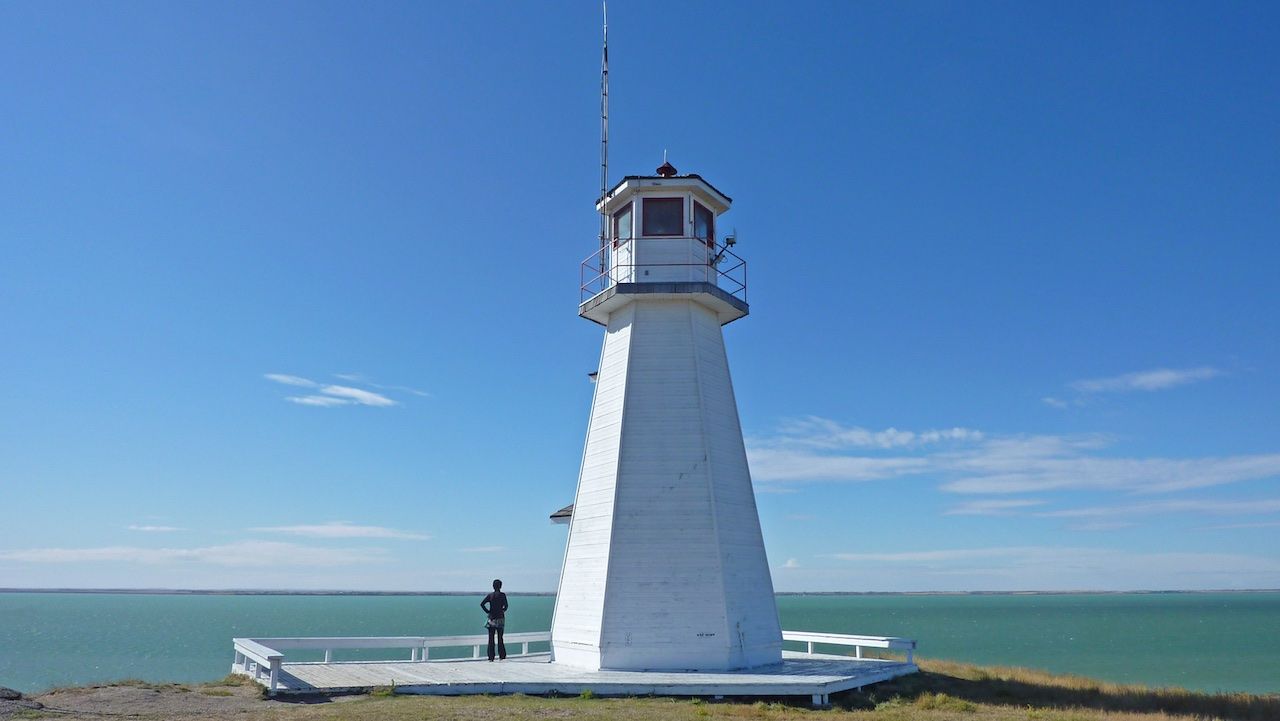 Landlocked Saskatchewan really does have a lighthouse. Found atop Pirot’s Hill on a narrow isthmus of land near the town of Cochin,

Unlike traditional lighthouses, though, this one welcomes people rather than warning them away. Climb the 153 stairs to the top for a fantastic view, especially at sunrise and sunset.

6. The Tunnels of Moose Jaw 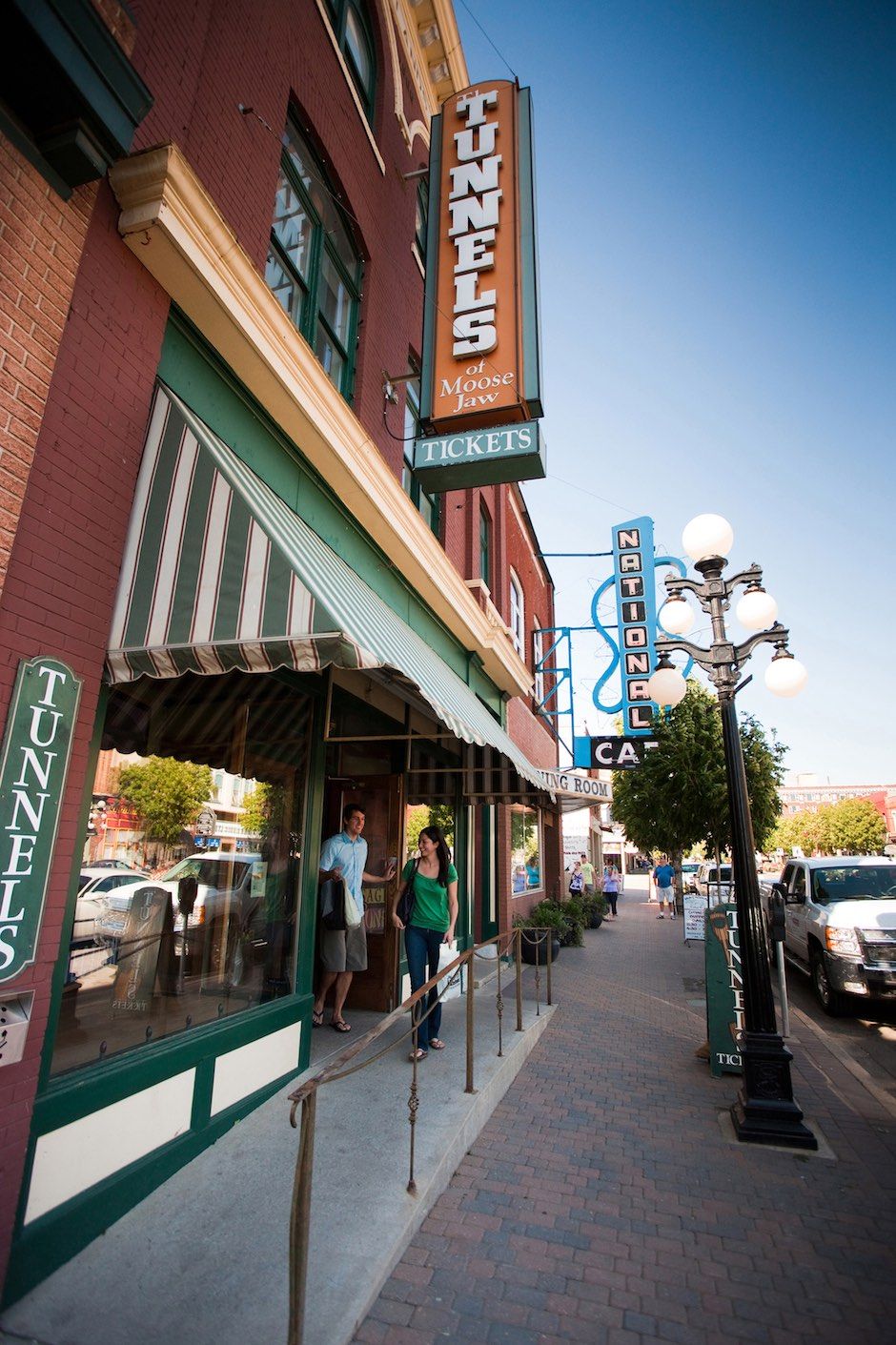 Welcome to Little Chicago, preferred place of business for America’s biggest rumrunners during Prohibition. Even Al Capone visited on occasion — or so the story goes.

Roughly 100 miles from the Canada-US border, Moose Jaw was the perfect location for bootleggers. Both of Canada’s major railways pass through the city, with the Canadian Pacific Railway traveling down to Chicago via Minneapolis. Equally as important was the network of tunnels that ran beneath the buildings and streets of the city’s downtown core. Built at the turn of the 20th century to help with the running of local boiler rooms, the subterranean network is said to have become home first to Chinese immigrants fleeing racial persecution, and second to the gambling dens, brothels, and liquor storerooms of the groups of gangsters. Explore the 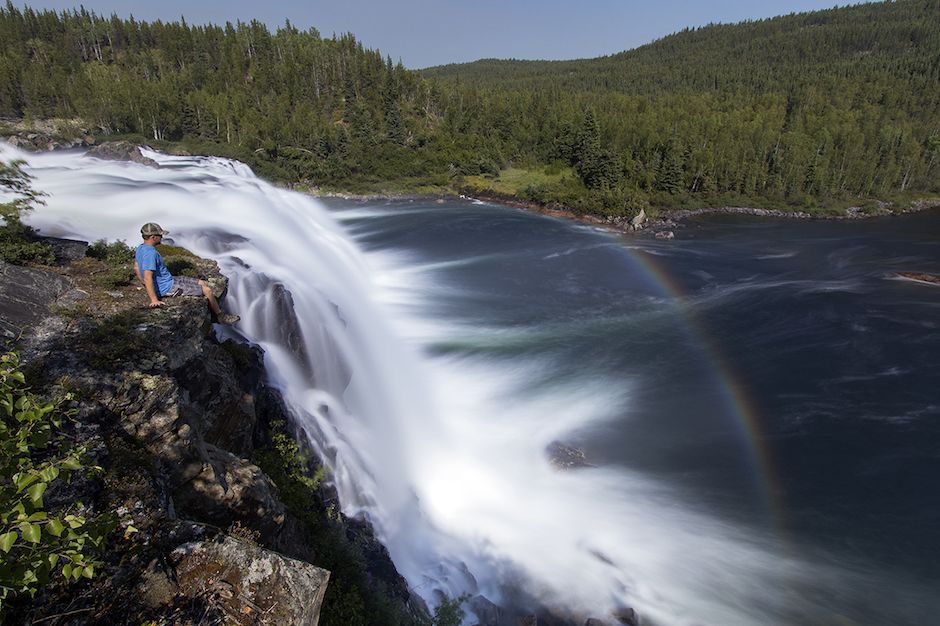 For a supposedly flat province, Saskatchewan has some pretty impressive waterfalls. There’s the beautiful

Here, the deep blue waters of the river stretch 160 feet across from one forested bank to another. Then, suddenly, all this water crashes down 50 feet over a rocky ledge to form a small glistening lake at the bottom before resuming its course downstream. Bald eagles build their nests on the cliffs surrounding the water. On the eastern shore, you’ll find a mist meadow — the constant moisture from the falls gives it a tropical appearance completely out of place in the province’s far north.

Note: This is another amazing place that’s relatively difficult to get to. Access to the falls is primarily via float plane out of Stony Rapids, about 25 miles away. Translation: You’ll have it all to yourself.

8. Pictographs along the Churchill River 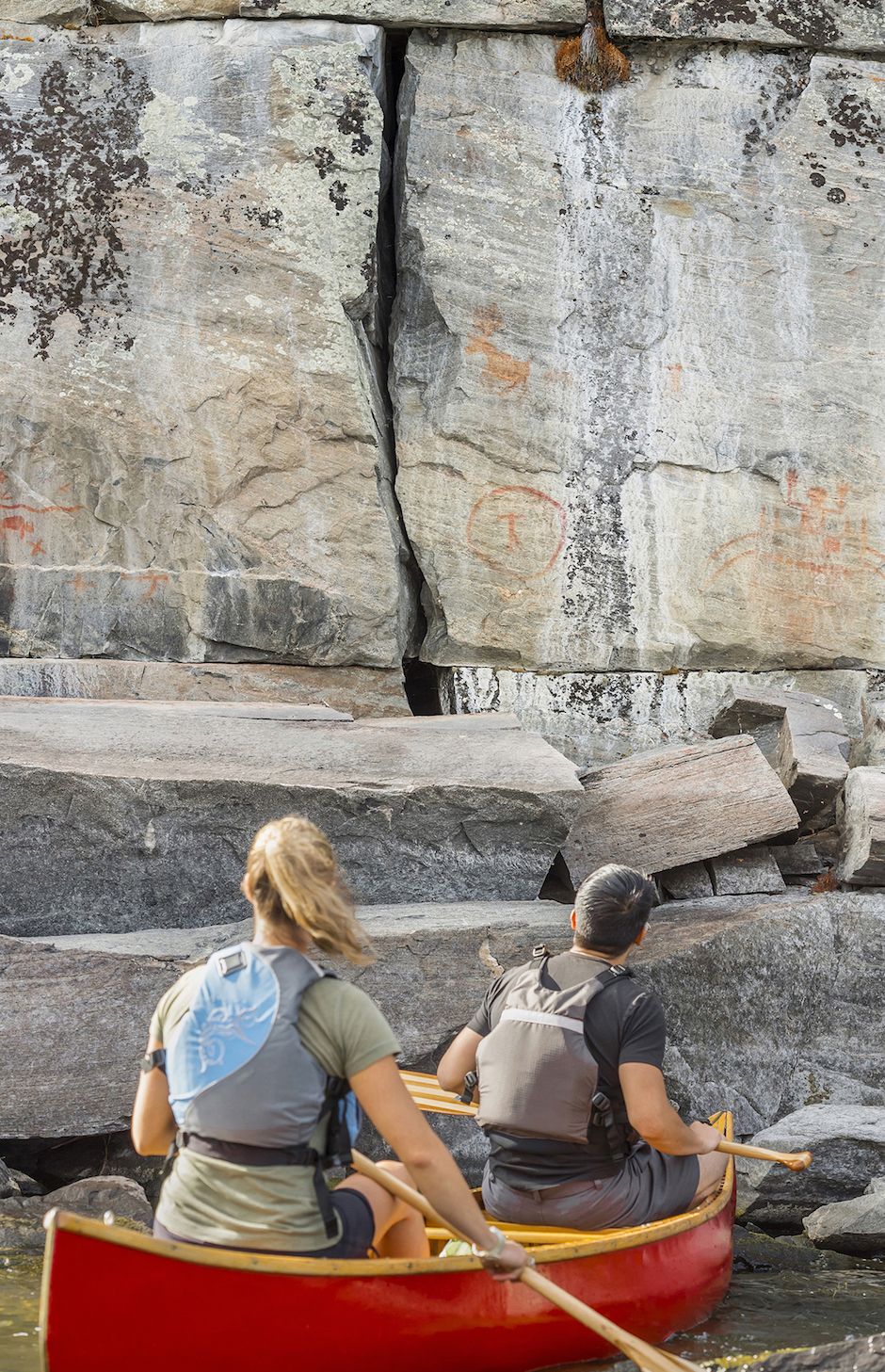 Northern Saskatchewan is covered in swathes of spruce, pine, birch, and aspen interspersed with bright blue lakes and rivers cut into the rocky landscape of the Canadian Shield. It’s a great place to spend time on the water — canoeing, kayaking, and fishing.

When canoeing on the Churchill River system between Ille à la Crosse and the Manitoba border, or on the many lakes and smaller rivers nearby, keep a close watch on the grey cliffsides on the water’s edge. Scattered here and there, you’ll find at least 70 spots to check out

Thought to represent the visions granted to young men on a quest, the reddish-brown figures include people, animals, spirits, geometric shapes, and various symbols. These minimalistic figures were painted with a red ochre mixture made of iron oxide and fish glue — and the paintings are slowly disappearing. This is a classic case of look — don’t touch — and definitely photograph. 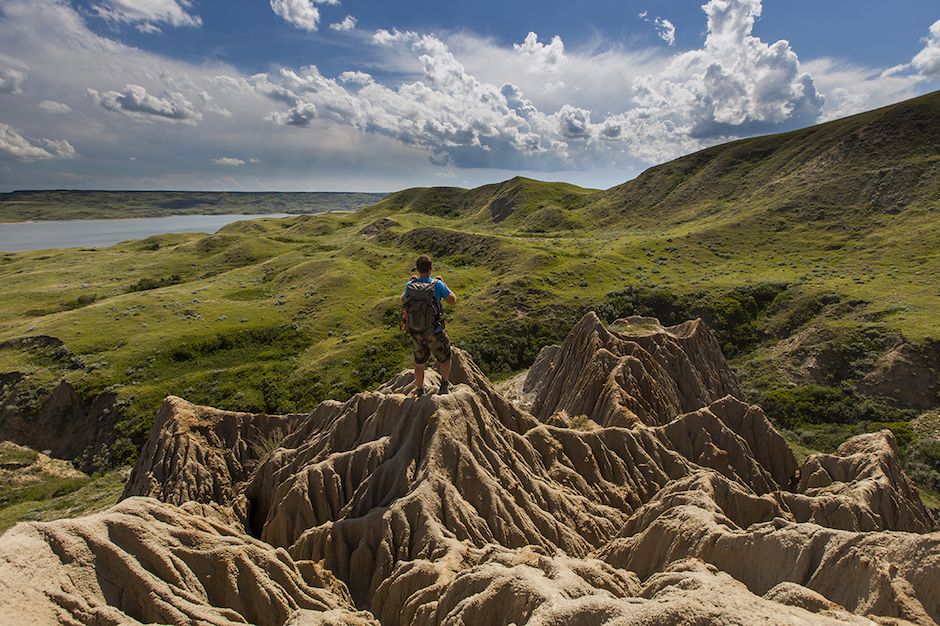 You can check out these outsized structures between May and October. Locate one of the tipi rings at the top and think about what it was like here centuries ago before the lake or towns or farms existed. Then hike down to the shore and look back up to see the sandcastles in their full splendor.

We’ve all heard of the wonder waters of the Dead Sea. The high salt and mineral content is said to have remarkable healing benefits. What many people don’t realize is there’s another lake on the planet with waters that contain curative contents —

Three times saltier than the ocean, Little Manitou Lake is rich in magnesium, potassium, sulphate, calcium, silica, and sulphur, each known for its respective health benefits. The lake’s high mineral levels are the result of a lack of natural drainage — the water simply has nowhere to go. Over millennia, as the waters have evaporated to be replenished by underground springs, they have left behind a high concentration of salt and minerals. A really high concentration — like the Dead Sea, you can swim in Little Manitou Lake, but you can’t sink. 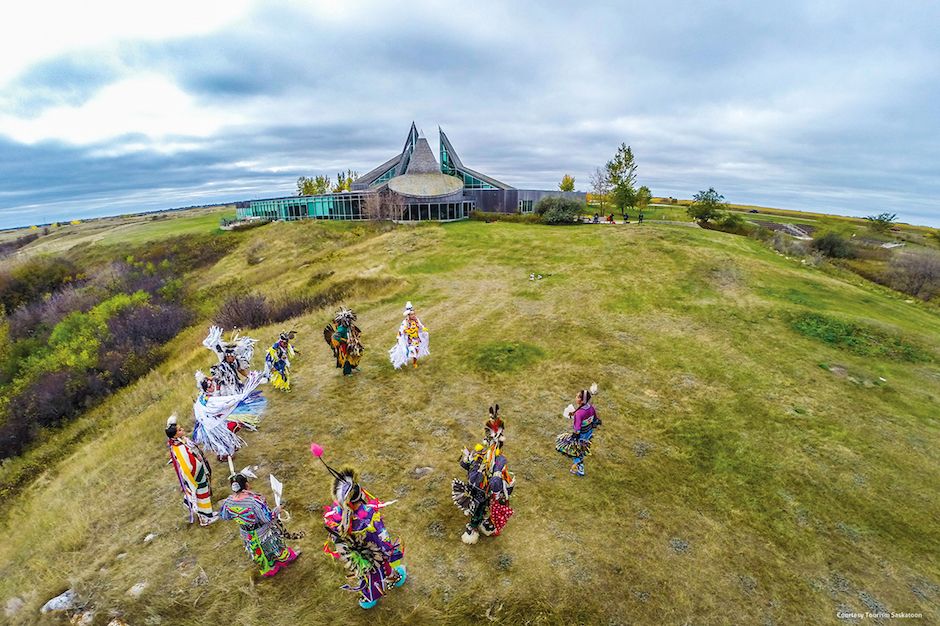 Across the province, archaeological evidence of the lives of the First Nations peoples dates back thousands of years. There are tipi rings and arrowheads, medicine wheels and petroglyphs throughout Saskatchewan, but nowhere is the concentration as great or as continuous as it is on the hills and valley of Opimihaw Creek just north of Saskatoon.

Today, Wanuskewin is a place to rediscover the past. A large interpretative center has been built, housing a museum, meeting rooms, and a restaurant that serves traditional foods like bison stew, bannock, Saskatoon berry desserts, and muskeg tea. Hiking trails wind throughout the area, and guided tours are offered. Archaeological digs are conducted, and powwows and other cultural events are held. The best part — you can spend the night in a traditional tipi.

Surprise: all of this in Saskatchewan!

This post is proudly produced in partnership with Tourism Saskatchewan.
Tagged
Travel Saskatchewan, Canada
What did you think of this story?
Meh
Good
Awesome

8 Surprises You'll Uncover on a Trip To Saskatchewan

You Know You're in Saskatchewan When...

12 Ways a Trip To Saskatchewan Will Surprise You

10 Commandments for Dating Someone From Saskatchewan

14 Signs You Were Born and Raised in Saskatchewan

25 Reasons To Explore the Canadian Prairies

Paddling With Pilsner in Saskatchewan’s Wilderness

Who You Meet in the Middle of Nowhere, Saskatchewan