The Czech Republic sits in the middle of Central Europe. I got a lot out of my time here, and would do anything to stay just a little bit longer. Here’s why!

1. Because you will find Portland in Prague 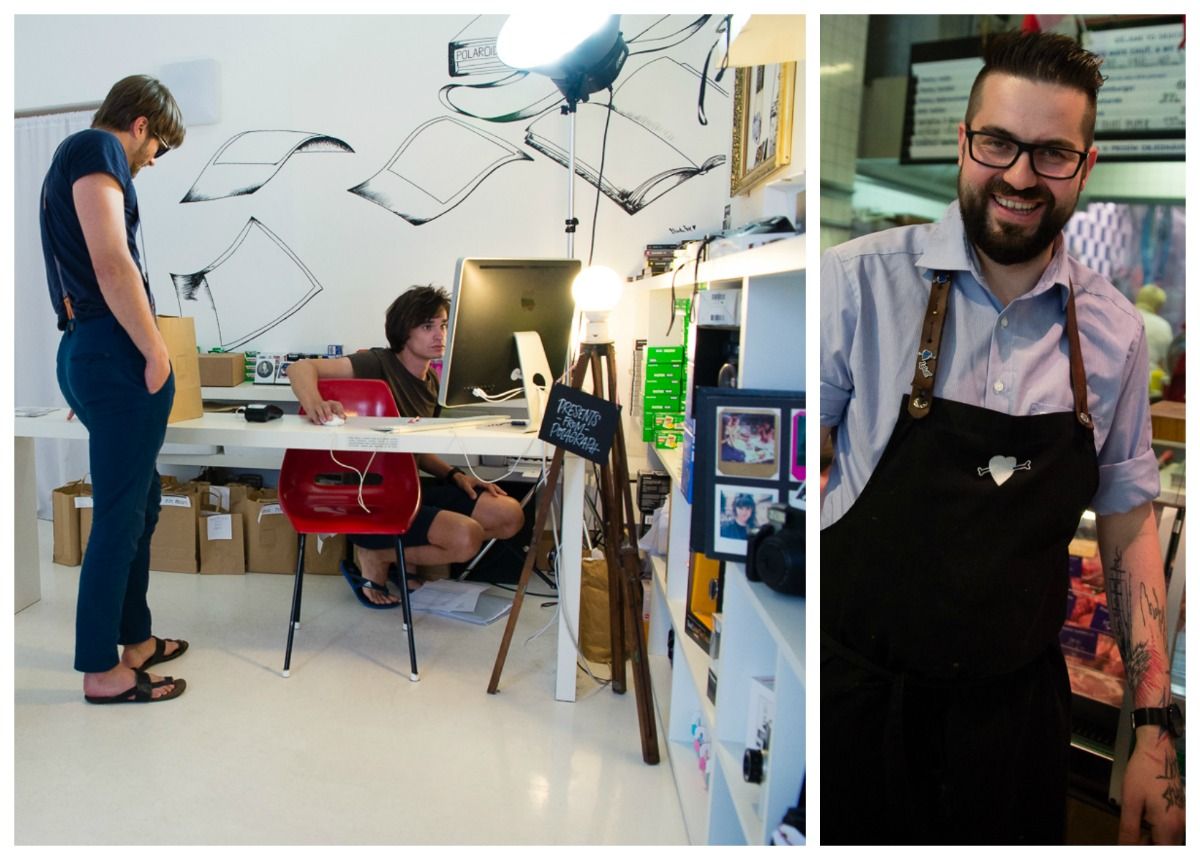 I live near Portland, Oregon and embrace its hipster culture, endless coffee salhops, restored buildings, eco-friendly attitude, bushy beards, and “Keep Portland Weird” quirkiness. I never thought I’d say this: Prague rivals Portland. Except Prague has old architecture and a better public transportation system. You can sign up for a tour through Prague Alternative Tours, and they will help you find the B-side of this well-known city.

2. Because the country is one of the top ten safest countries in the world 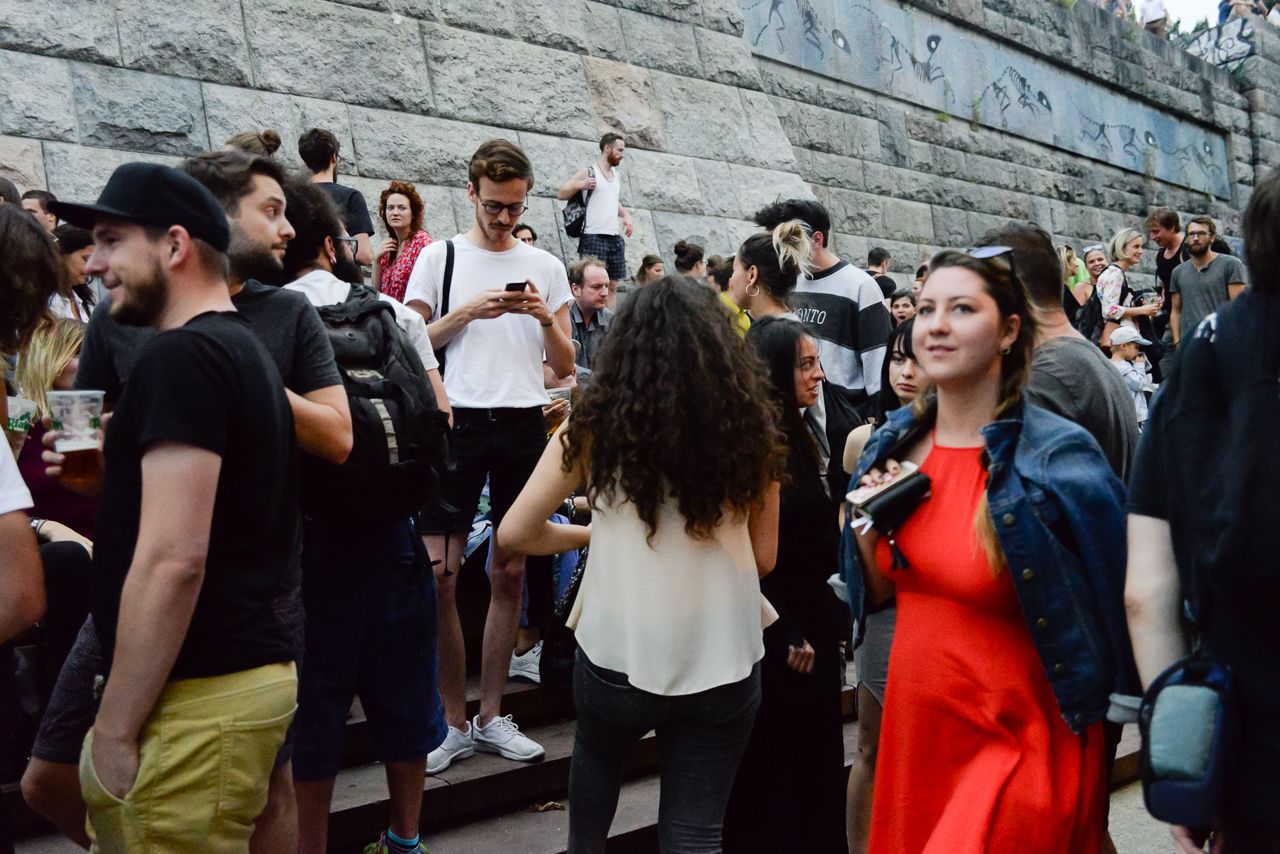 As a female photographer, I think about safety. I carry a lot of camera gear on my back, and even though it is insured, I must take precautions. In the Czech Republic, I wandered solo in Prague, Brno, and Olomouc during the day and the night and never felt threatened. One safety tip from the locals: watch your belongings when riding the public transportation. But that’s a pretty standard suggestion for any city, anywhere. Otherwise, explore away, because the Czech Republic is the sixth safest destination in the world.

3. Because there is so much more than Old Town, Prague 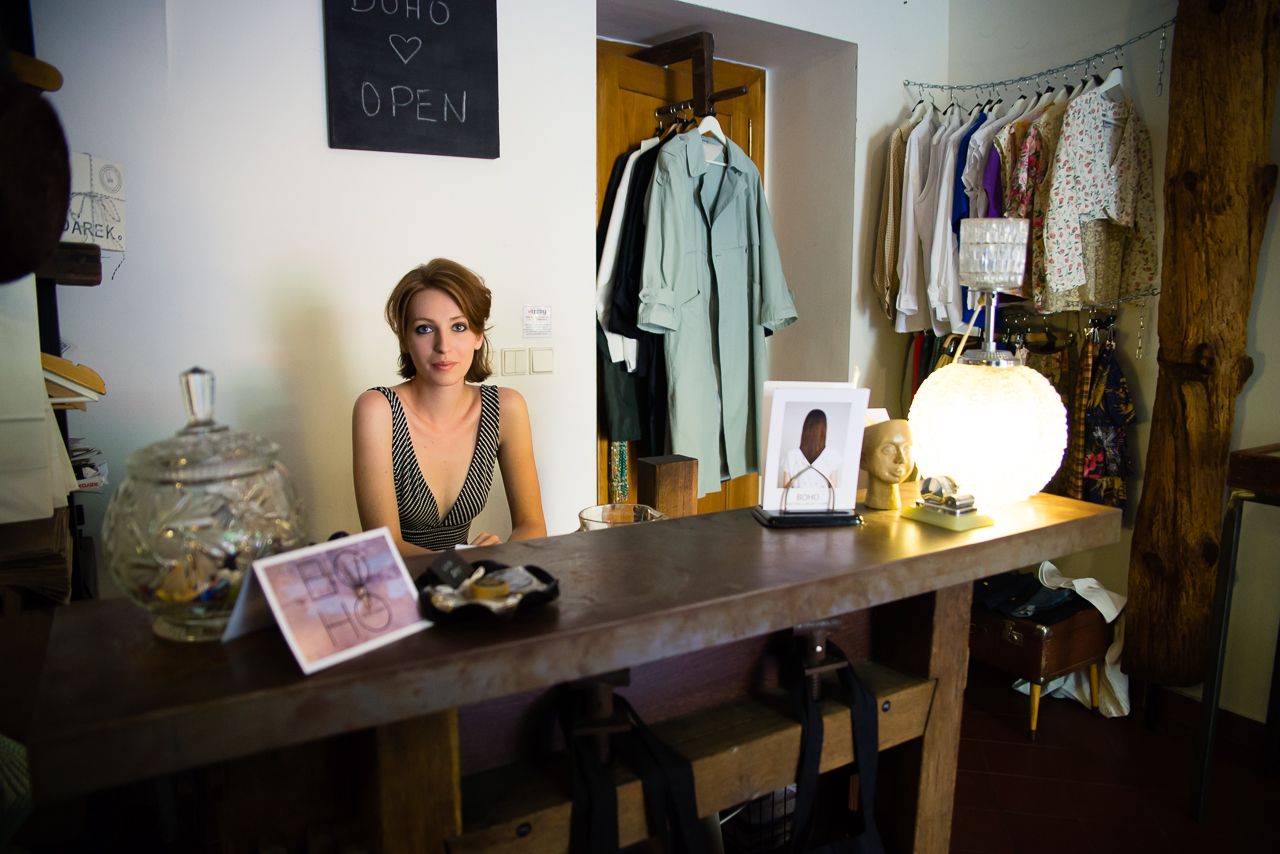 I traveled to Prague and never set foot in Old Town – not even a toe. If you want to experience Prague like a local, spend your time in the surrounding neighborhoods. Book a room at the Czech Inn on Francouzská street and eat lunch at the vegan restaurant, Plevel. Then pick up an accessory at Boho Vintage Concept Store. In Holešovice, relax at Sir Toby’s and visit the happening bar, Cobra. Eat Bohemian steamed blueberry dumplings at Krystal Bistro inside the revamped neighborhood of Karlín. Or pick a camera for your trip at Polagraph, a small specialty shop specializing in Polaroid cameras. Leave Old Town with its shoulder-to-shoulder tourists and overpriced trinkets. Away from it, you will find creative businesses with local charm and reasonable prices.

4. Because a bar is an experience, not just a place to drink 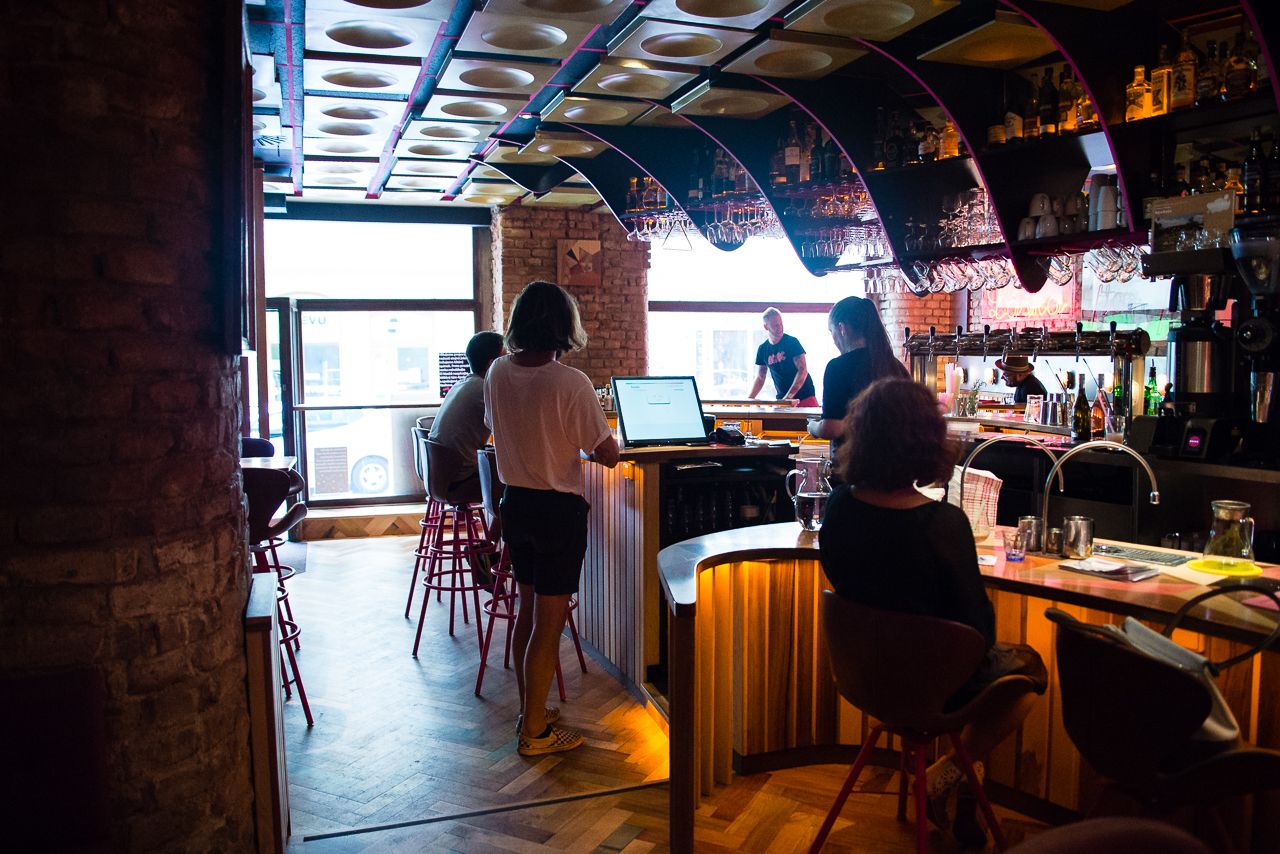 In Brno, I had the opportunity to interview bar owners. During my interviews, not one of them mentioned money. A patron’s experience took priority. The best bar in the Czech Republic, Super Panda Circus, had a swirly, red ceiling which looked like something from a Dr. Seuss book. I asked the owner, Adam, to describe his business in three words, and he said, “A psychedelic, intimate jungle.” Another bar, 4rooms (4pokoje), is an award-winning bar despite being only six months old, and had handmade, custom-designed leather bar stools painted pink against a nonlinear bar top. One owner, Tomas, with his red hair and bright blue eyes, said, “We wanted to make something new, something different. 4rooms is opened twenty-two hours. You can even sit and have coffee, you don’t have to drink.”

5. Because of its flowing rivers and serene mountains 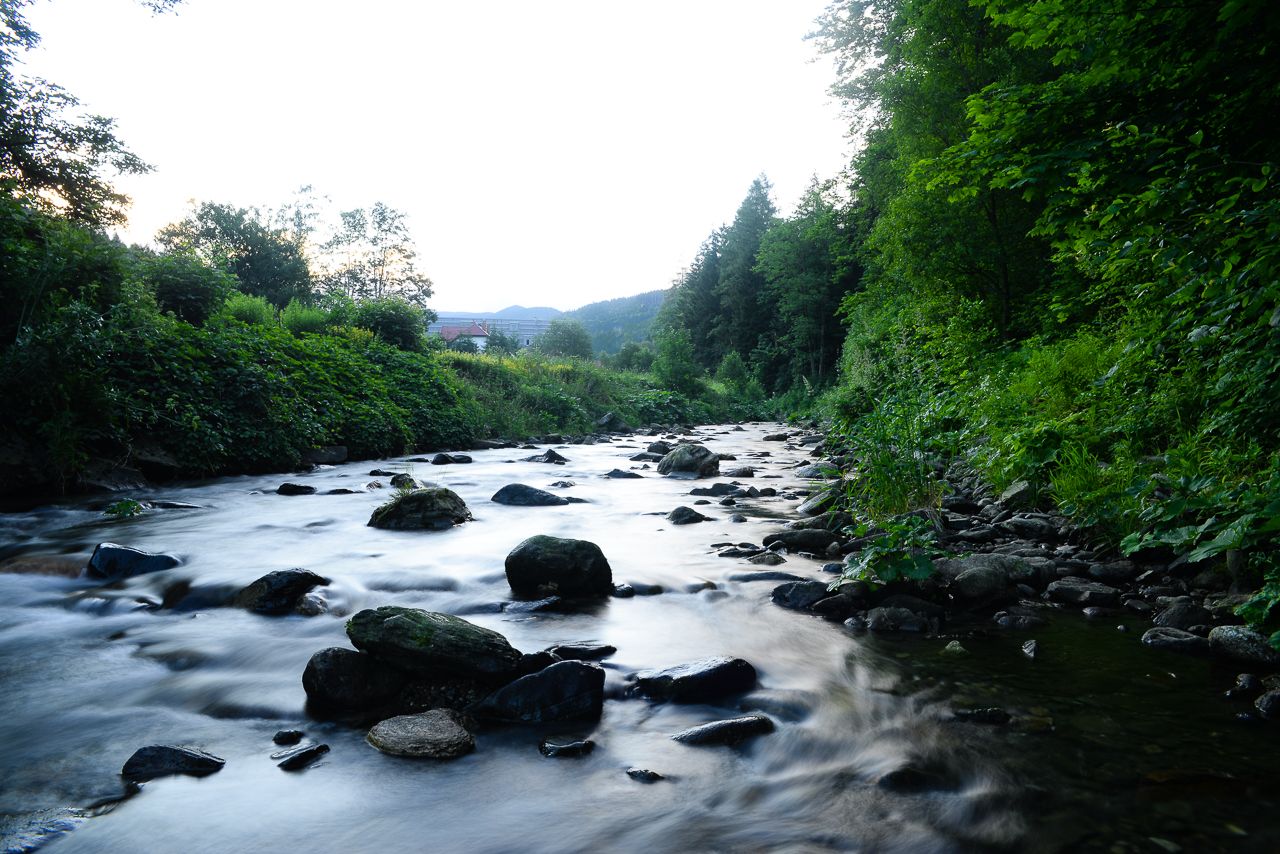 The above photo is a river in the Jeseníky Mountains. Massive evergreens, deep caves, and thundering waterfalls are part of the natural landscape. The air is fresh and crisp. An extensive hiking system leads to mountain huts where hikers can stay the night. Ride through the mountains on a horse named Shayla or Shelby, or rent a bike at Hynčice pod Sušinou. I almost left this one off my list, as I felt compelled to keep this hidden beauty all to myself.

6. Because the people aren’t too serious 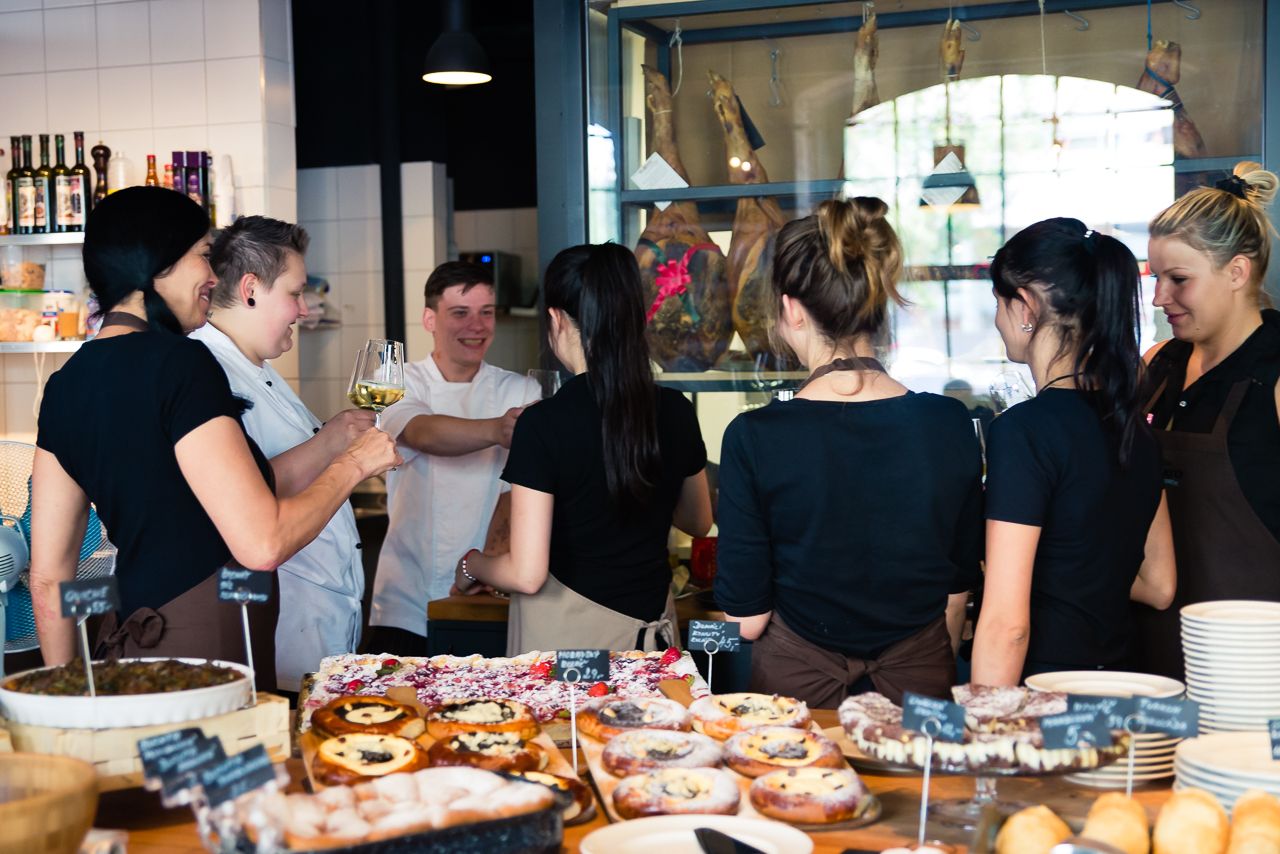 Before traveling to the Czech Republic, I talked to travelers who had visited the country. Many told me “the Czechs were a serious people.” I discovered the opposite. Whether I wandered around Brno solo and lost with a paper map, attended a Gourmet Food Festival with top restaurateurs or visited a small village near the Austrian border, people smiled and volunteered to help. The Czechs have shed the stern demeanor of communism. Don’t you think it’s time for us to shed the Czech stereotype?

7. Because the streets are filled with history 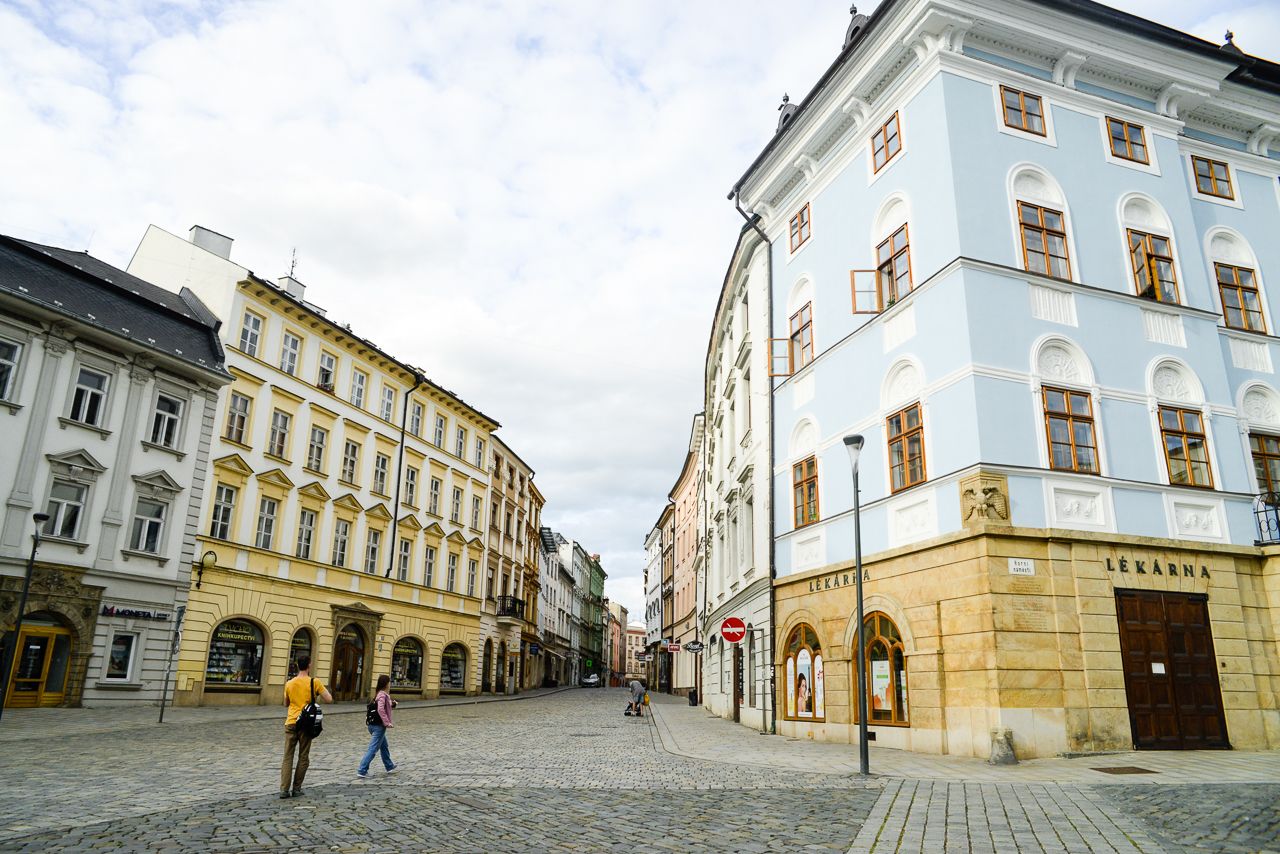 Every city is brimming with stories. At the age of eleven, Wolfgang Amadeus Mozart lived and composed Symphony No. 6 in F major in Olomouc. Down the street, an Astronomical Clock, one of only two in the country, slowly rotates tiny blacksmiths to ring a set of bells at noon. At The Church of the Virgin Mary of the Snow – a university church built by the Jesuits – a skilled organist, Mr. Kunc, played a two-and-a-half thousand pipe organ for me. Archduke Rudolf of Austria (1788-1831) loved the city of Olomouc and per his request, his heart was buried there. Every step of the way you can sense history everywhere: in the walls, the bricked streets, the buildings, the plaques, the doorways.

8. Because the food is award-winning 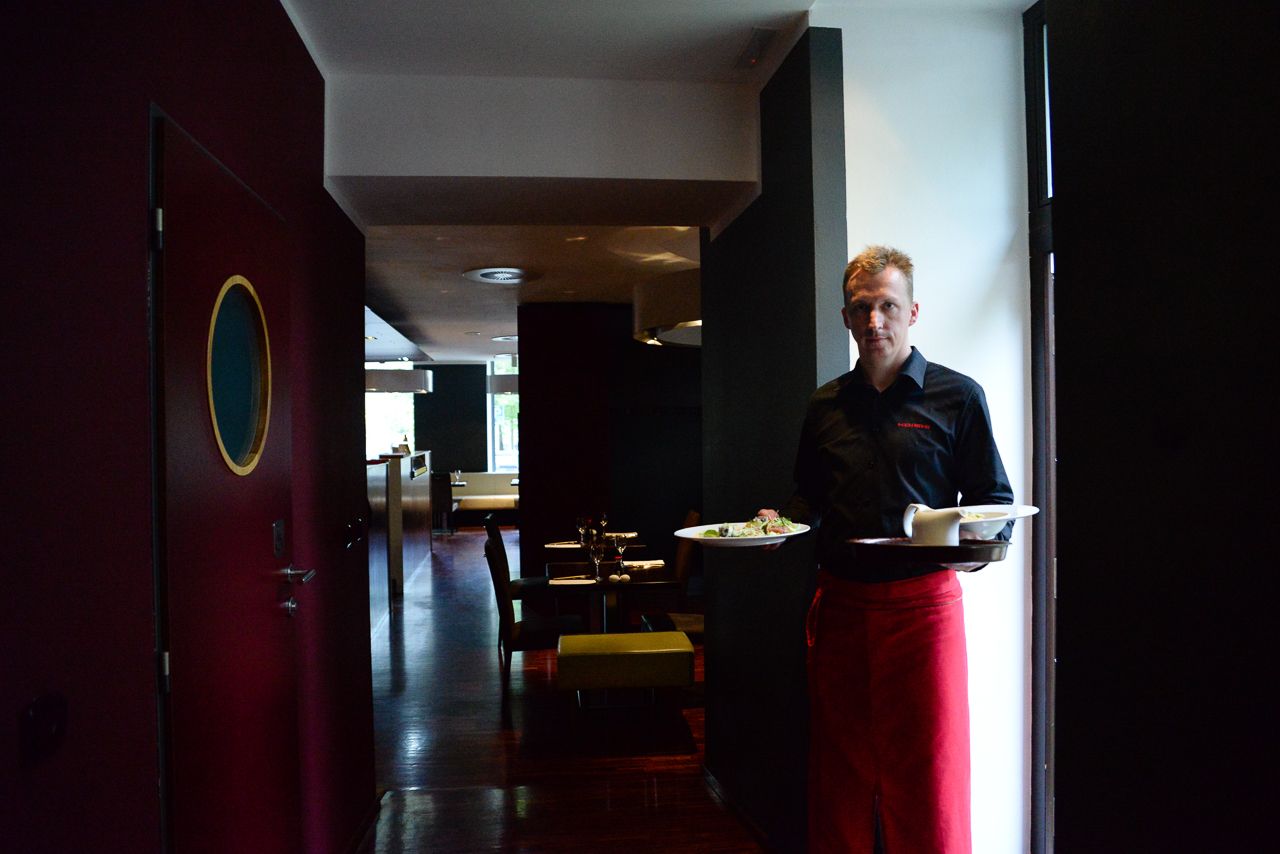 While in Brno, I photographed Gourmet Brno 2017. Each year, twenty-one experts review multiple places to eat and drink in seven categories. After, the list is narrowed down to the best places in Brno. One local favorite, Cupcakekárna, has over a dozen types of freshly-baked cupcakes each day. You can grab a cup of coffee and a French-style cake at Café Momenta. For dinner, eat delicious sushi at a specialty fish restaurant, Koishi, who held the award for best restaurant in the Czech Republic in 2013. After, hop next door to Petit Cru, a wine bar, and shop. If Prague is your stop, sign up for the Taste of Prague food tour. Ask for Jan.

9. Because they know wine 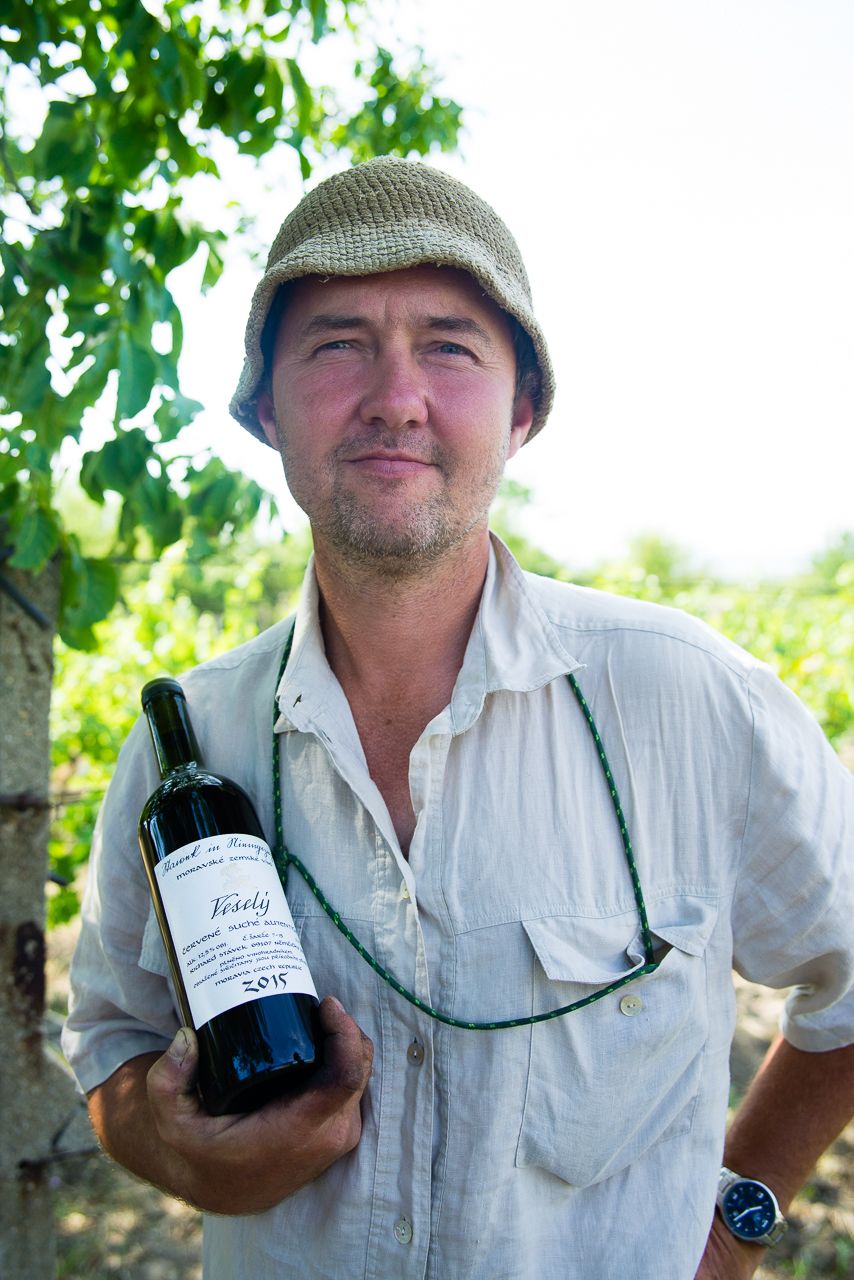 The above portrait is of the authentic winemaker, Richard Stávek. He still uses classic, traditional methods of producing the wine, like stomping on the grapes by foot. His wine cellar is eleven layers thick, and is burrowed into a rambling landscape in Vrbice. Stand in front of the cellar doors, and you might think you are in the Shire. Travel on, and you will find the tiny village of Mikulov where a family-run hotel, Pod Kozím hrádkem, has a wine cellar built into the side of Goat’s Hill. You can also taste one hundred of the Czech Republic’s award-winning wines from Bohemia or Moravia in the Wine Salon of the Valtice Castle.

10. Because of its UNESCO sites 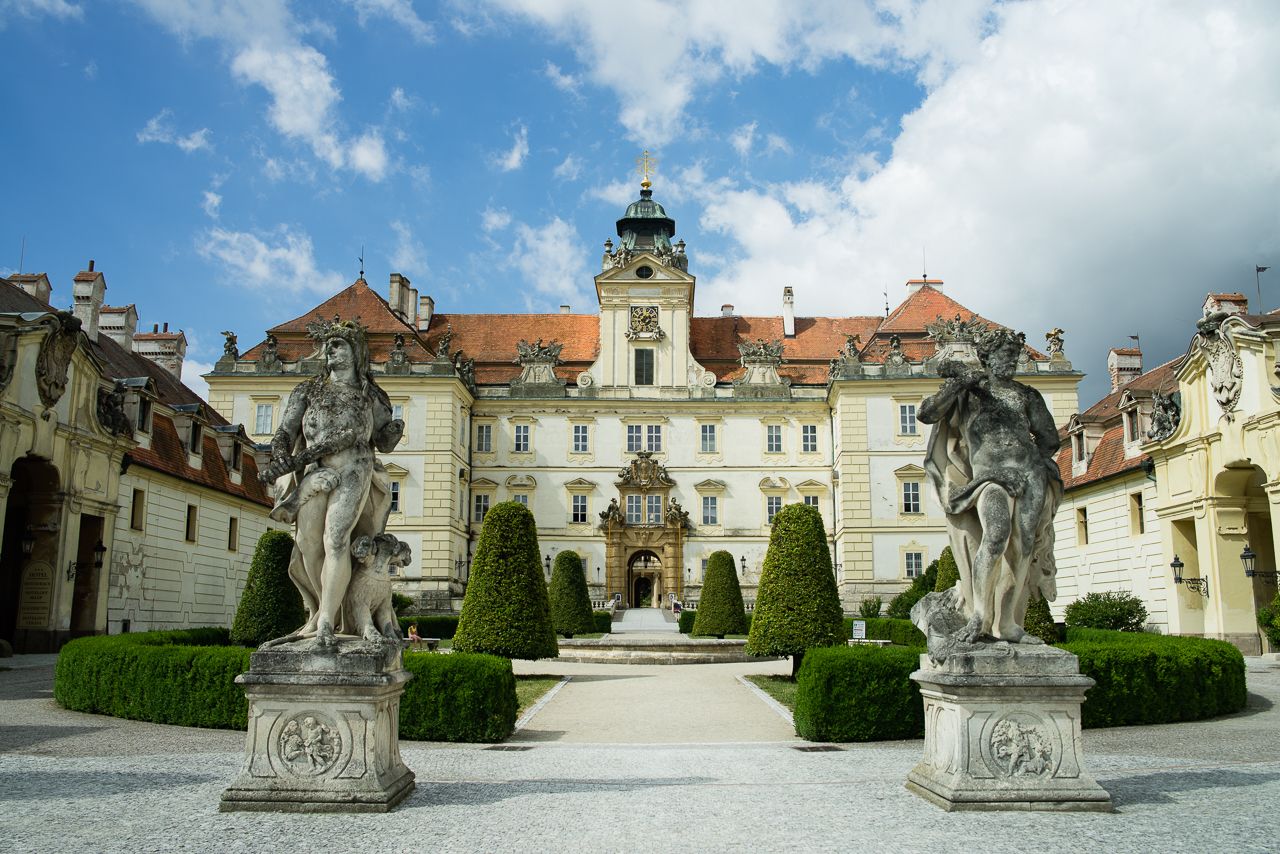 There are twelve UNESCO sites in the Czech Republic. I had the opportunity to visit one site in South Moravia – the Lednice-Valtice Cultural Landscape. An almost five-hundred-acre Chateau park was covering three manorial holdings: Lednice, Valtice, and Břeclav. Each one belonged to the noble family of Liechtenstein. The family held stewardship of the area for almost seven hundred years. If you happen to be visiting during the summer solstice, you can join in on the Saint John’s Day festival.

11. Because the people are creative 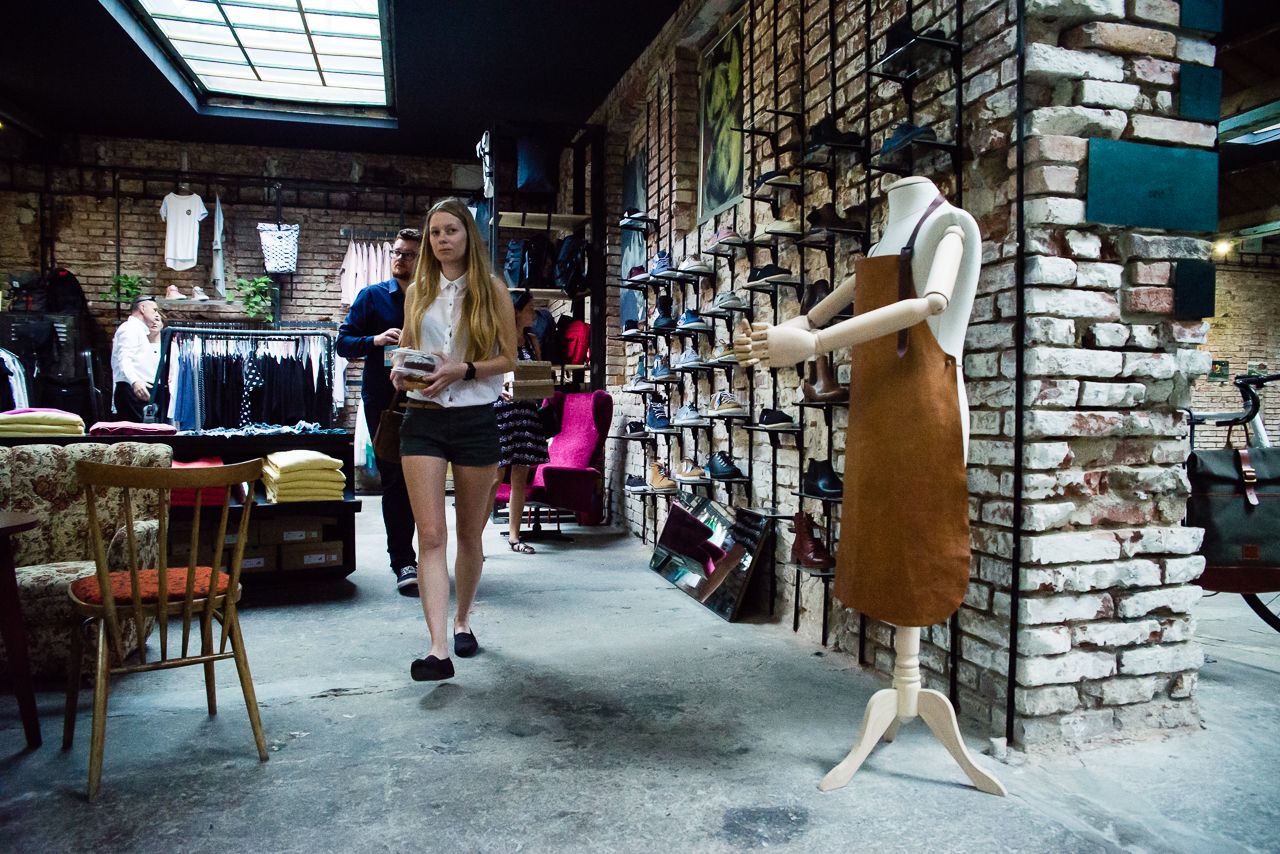 The people of Czechoslovakia were oppressed during the years of totalitarian rule. A few years after the fall of communism, the newly formed Czech Republic suddenly had creative privilege. The history reminds me of a shaken soda can. The can popped open, and creativity exploded everywhere. Now, a younger generation has become the visionaries of the Czech Republic. Designers, such as those at Vnitroblock, have shaped a gallery space and showroom for local and Central European fashion brands. Similar to Cirque de Solei, you can catch a high-flying show performed on ropes and scarves hanging from the ceiling at Jatka 78. Here, the multifunctional theater hall and small-scale theater used to be a former slaughterhouse.

12. Because they can roast a brew in Brno 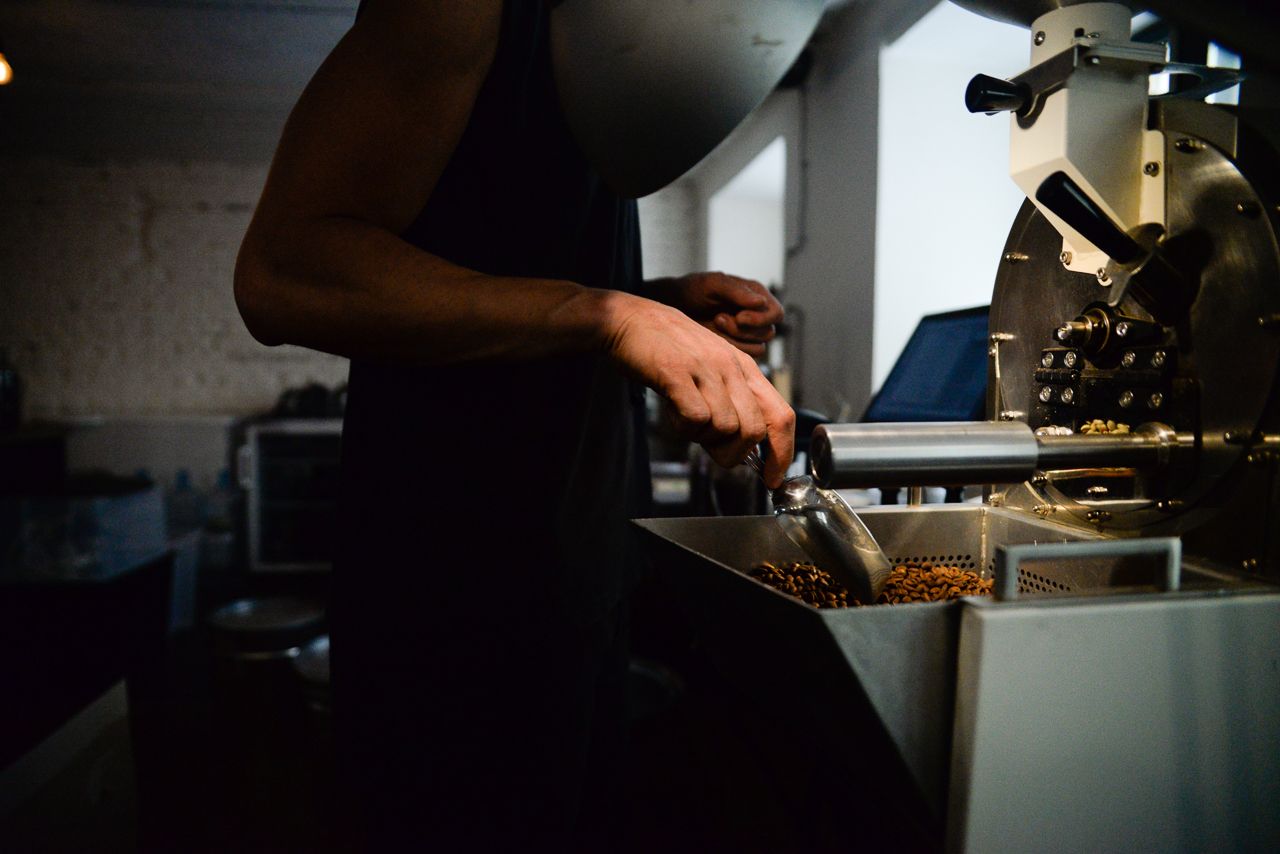 Adam Neubaur runs the Monogram Espresso Bar in Brno. He took tenth place in the World Barista Championship in Seattle. Cafe Mitte, part of the Mitte Hostel, was one of the first specialty cafes in the area. Natalie, the barista there, likes to attend the local coffee festivals: The Filter Festival and Coffee Week Brno. If you need a haircut or tattoo get one while drinking coffee at Rebelbean. Or chill at SKOG Urban Hub, one of the hippest cafes in the area. But don’t take my word for it, check out the European Coffee Trip website for European city guides and festivals. They know a good roast.

13. Because it has a complex past and hopeful future 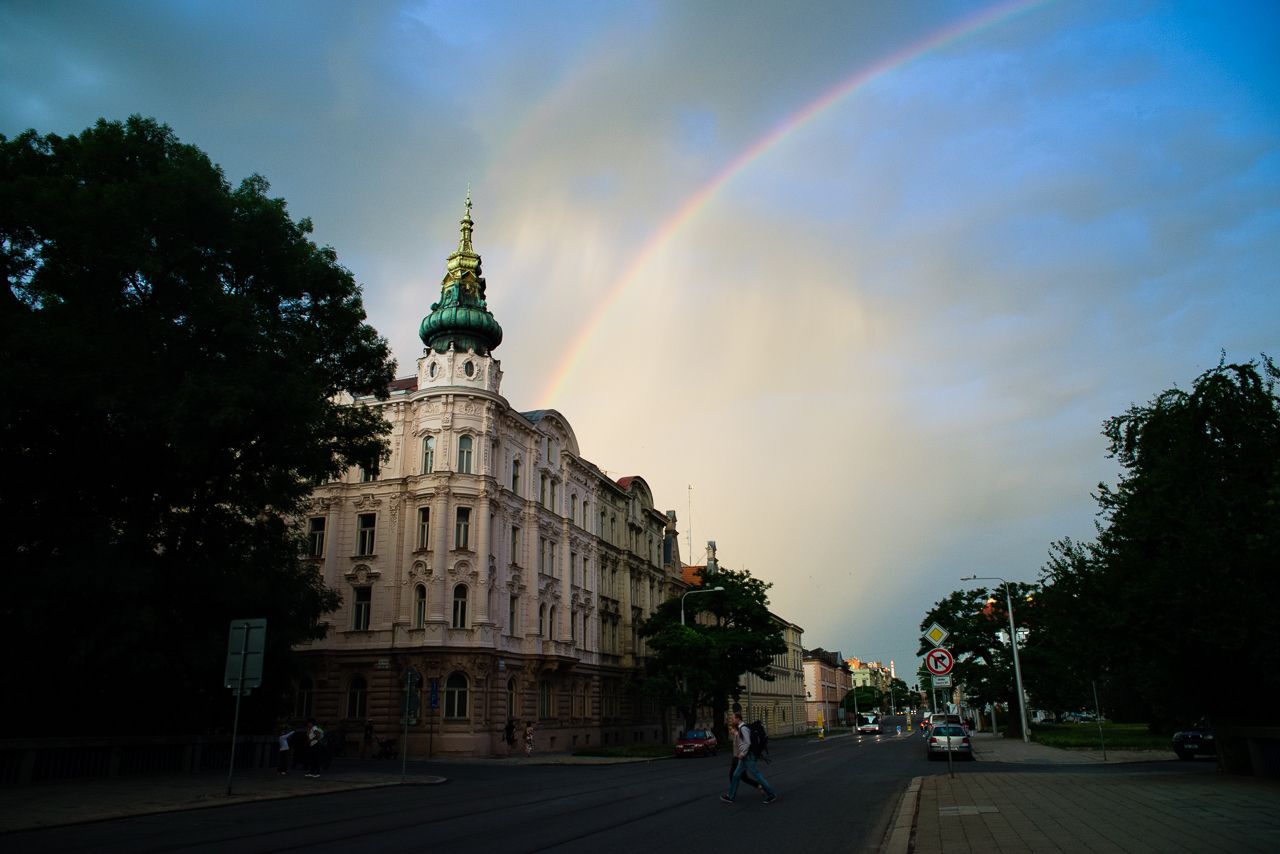 In 1989, the country Czechoslovakia fell from a communist regime. It remained a country through what the Czechs call the “chaotic years” until 1993 when it split into two separate countries: the Czech Republic and Slovakia. Only twenty-eight years have passed since the fall of communism. That’s the age of the Millennial generation. And it’s been the Millennials, along with forward-thinking members of the older generation, that has rebuilt the socioeconomic status of the Czech Republic. One cannot argue the effect communism had on the country, but the oppression of the past has been fuel for a bright future.

14. Because sustainability is celebrated 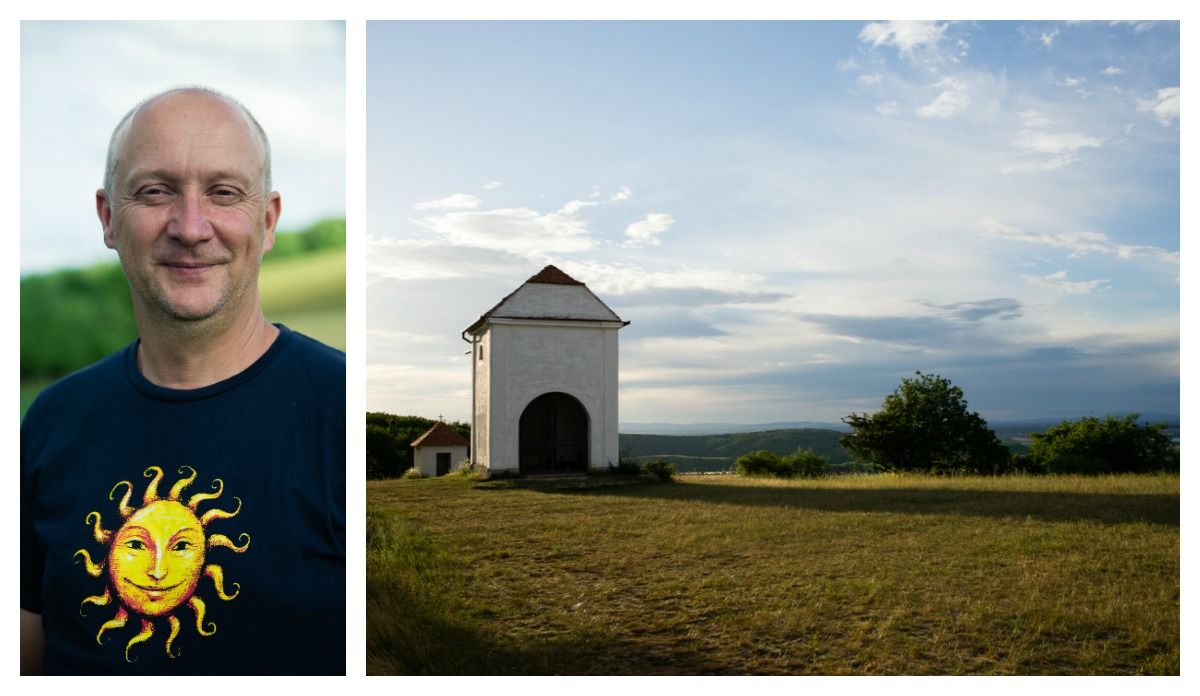 In Čejkovice, I had the opportunity to participate in a factory tour of Sonnentor – a producer of organic teas and spices. Later, I visited their sample field in Velké Hostěrádky where I met Mr. Tomáš Mitáček – the man in the portrait. I was impressed on how Sonnentor handled their methods of production through expansion, despite being a very large company. They are present in forty-five different countries, yet the small, organic farmer has remained essential to the quality of product and the company. Look up their website and the farmers are listed one by one. Before traveling to the Czech Republic, I asked if I could travel sustainably throughout the country. I did so without difficulty. If you want to explore this way too, pick up the “Prague Green City Guide.” It is a small handbook filled with eco-friendly places to eat, drink, sleep, shop and explore. One of my guides who talked about local farms, Robert Tichý, said, “Short-term thinking is bad. The main thing is sustainability. We borrow the soil from our children.”

[Note: Ingrid was a guest of Czech Tourism.]

Trip Planning6 Ways To Get Away From the Crowds in Prague
Tagged
Trip Planning Czech Republic
What did you think of this story?
Meh
Good
Awesome

Watch: a Timelapse That Will Make You Yearn for Bohemia

12 Super Chill Experiences To Have in Prague

10 Czech Customs the Rest of the World Should Adopt

6 Ways To Get Away From the Crowds in Prague