From yogurt soup to flower jam, cornbread covered with melted butter, and crispy feta pastry – Bulgaria is a paradise for the traveling foodie. Check out these local favorite dishes from around the country. 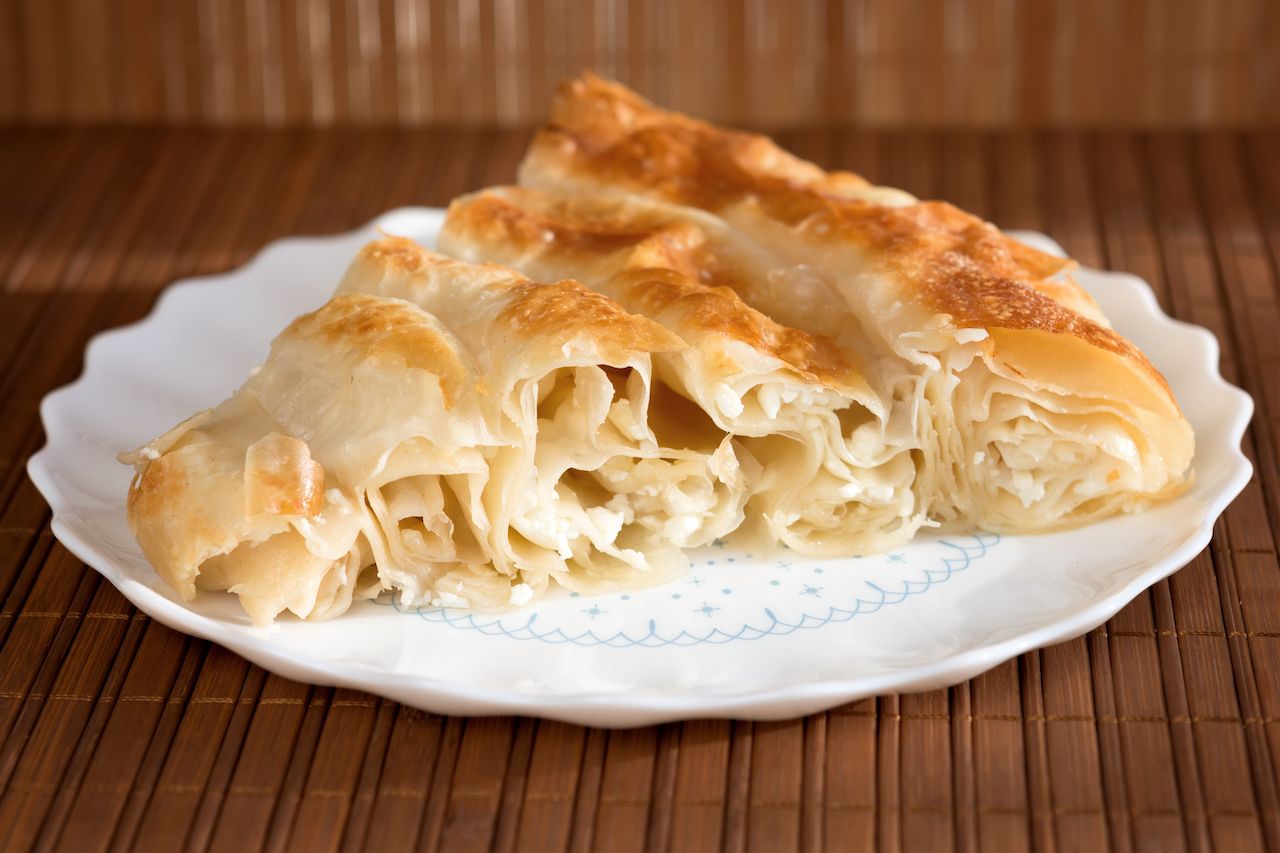 No dish represents the warmth and hospitality of we Bulgarians, quite like this buttery, crispy pastry. According to grandmothers around the country, if a girl can’t make banitsa properly, she’ll never make it in life, so I had to take some classes early on. The perfect banitsa has to have a soft and tender inner part with feta cheese melted ever so slightly.

While banitsa is popular nation-wide, the Northwestern Bulgaria region around Vratsa and Vidim is said to be its cradle. There are two types – the round one, where the pieces are woven together and a flat, humble one which aims not to impress with looks but with taste.

Banitsa’s less famous yet equally as delicious counterpart, luchnik goes all out on the onion, stuffed into thick baked dough. Bulgarians don’t recommend that you eat luchnik on a first date, unless you really want to friendzone the person.

This pastry resembles a bagel and just like the people from Gabrovo, its home region, is tough on the outside but delightful once you get used to it. As a kid, my favorite field trip was to Etara – a historic village with an elaborate water canal system and charming houses. I didn’t care for the history; I just went for the simid and waited at the entrance for everyone to get done sightseeing. Totally worth it. 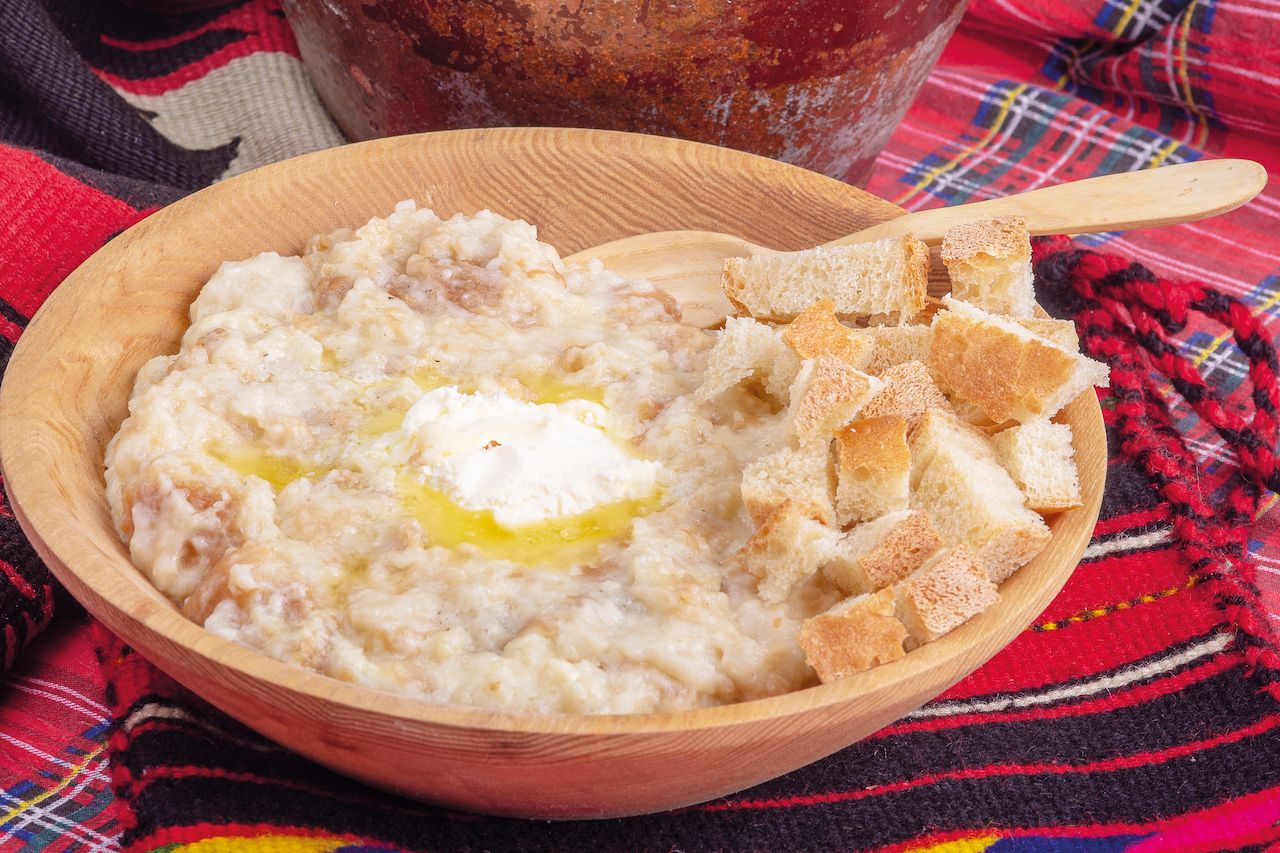 Winters in Bulgaria suck. While our summers are hot and sunny, the cold season traps us at home under five feet of snow. The only thing that could get a Bulgarian out of bed in these conditions is a steaming hot bowl of popara.

This breakfast porridge is made of cow’s milk, crumbled feta cheese, sugar and a large piece of bread broken into pieces which you let soak into the warm mix.

We Bulgarians love our salads. There’s not a single birthday party, wedding or funeral you’ll go to where there’s not a salad course. This one is perhaps the most famous salad in the country and the name literally translates as “bohemian salad.”

It’s typical for the Sofia region, where people are said to have a bohemian, larger-than-life attitude towards things. It consists of tomatoes, cucumbers, grilled peppers, onion and feta cheese, with an olive on top.

The other major player in the salad game is Shepherd’s salad (ovcharska salata). This one is made of tomatoes, cucumbers, grilled peppers, ham, black olives, boiled egg, and feta cheese. My grandfather who used to work as a shepherd for his dad used to swear by the healthy benefits of this dish and ate it for 80 years. 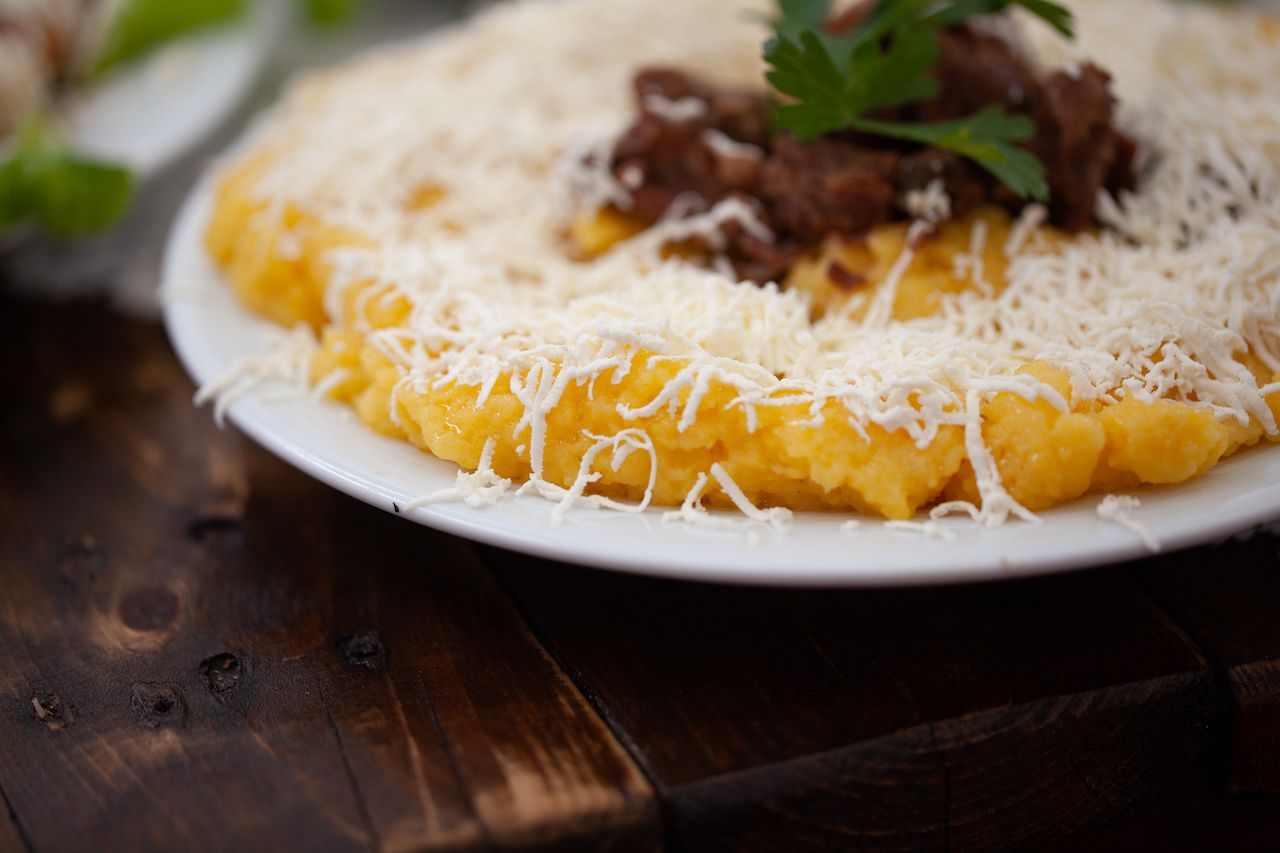 Fluffy and light, kachamak is the Bulgarian version of cornbread. You’ve got a lot of freedom when it comes to stuffing. My family always makes it with feta cheese and fried, chopped chicken liver. Once it’s done, you pour melted butter and sweet paprika over it for an extra rich taste.

This simple homemade bread is the pillar of every Bulgarian household, and is served at every holiday. My grandmother still claims that my grandpa married her because she made the meanest pitka in town, elevating her from a “simple village girl” to the wife of a twentieth century aristocrat. The cool thing with this bread is that you can draw and create shapes on the top, which scores you major points as a chef.

If you love to impress but have no idea how to cook, gyuvetch is your godsend. The beautiful ceramic pot named “guyvetche” serves kind of like a crockpot. You simply throw in your favorite vegetables, some meat, an egg and cheese, and throw it on the fire or the oven for hours. You can buy artisanal gyuvetche pots at road stands close to Teteven on all over the country or in Tryavna and Lovech. 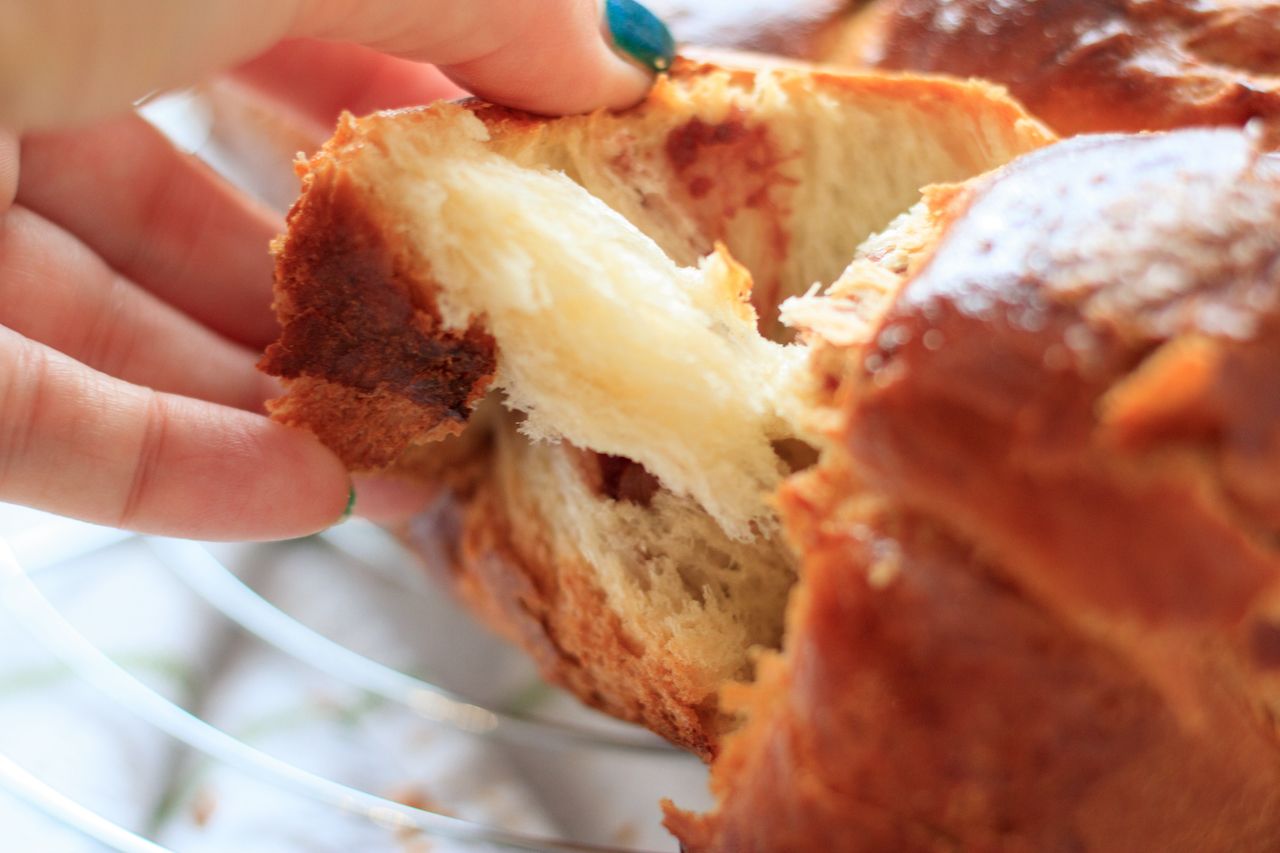 Bulgarian children love Easter but not for the chocolate cream eggs or bunnies. The real reason is kozunak. This light, soft pastry is sweetened with sugar or sometimes honey and raisins and melts as soon as it touches your tongue. Kozunak is popular and beloved country-wide.

We love to barbecue meat, but don’t imagine a clean George Foreman party in the backyard. I’m talking a crowded town market with smoke floating ten feet in the air and loud music playing, while dogs run around looking for a bite someone may have dropped. This was my childhood Friday in Botevgrad.

The two most popular meat goods we grill are kebapche and karnache. Kebapche is a short, chubby sausage made of chicken, veal or pork. It has a slightly spicy, buttery taste and a hint of smokiness. You eat it inside a massive piece of rustic bread. If you’re not struggling to open your mouth wide enough to grasp it, it’s not the right Kebapche sandwich.

The karnache is much spicier and coiled in shape, like a rattlesnake. Its flavor is stronger and it normally comes pinned together by toothpicks. You can eat it with bread or with a side of salad. Both dishes are usually accompanied by a cold beer.

Bulgarians don’t like to leave things up to chance. In order to prepare for a bad winter, we make turshiya — pickled vegetable medley. My grandmother keeps hers on a museum-like display in our garage, all in glass jars which she proudly shows to every international friend I bring home. She makes pickled mixes of carrots, sauerkraut, green tomato, red tomato, cabbage, cauliflower and celery. 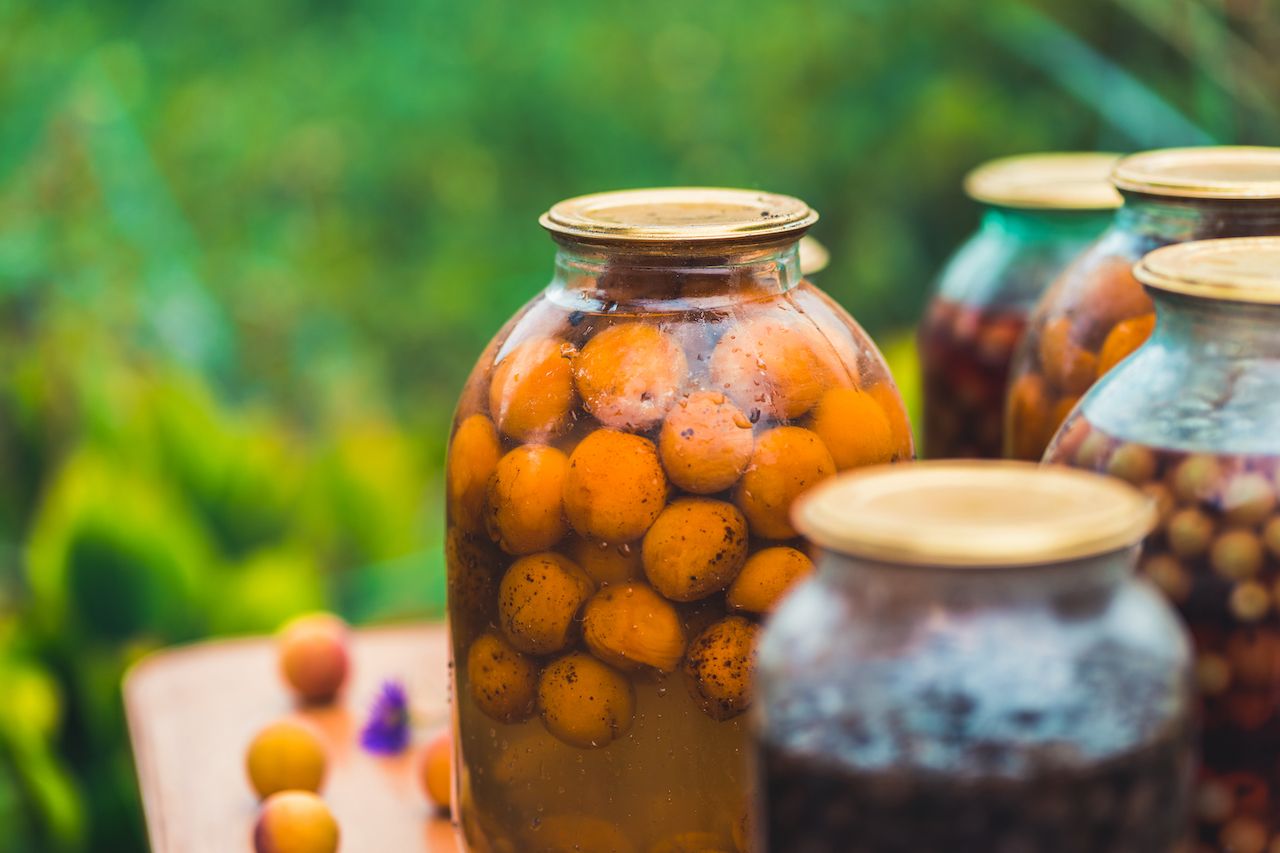 This is the fruit version of turshiya. The neighbors in Pravets, Vrachesh and Botevgrad gather in someone’s yard or behind apartment buildings and light a huge fire. They communally boil their jars of kompot and take turns flipping them. The flavors include cherry, peach, apricot, plum, sour cherry and raspberry.

Don’t put that fire out yet because it’s time for luytenitsa. This thick tomato and pepper concoction is served as a dipping sauce, a side dish and a sandwich spread. We love to make a single slice sandwich with luytenitsa and grated feta cheese.

We’ve got a thing for cheese. While we cherish our feta and would fight any Greek who claims they invented it, kashkaval deserves some attention too. Similar to Munster and Swiss cheese in texture, kashkaval’s taste is soft and milky. It goes well with pretty much every dish. We love to melt it on top of a toasted piece of bread and add a tomato slice to finish.

This is one of Bulgarian meat lovers’ favorite dishes. Kavarma features slices of pork, veal or chicken with onion, peppers, oregano, garlic, and parsley. You’ll run into this dish in villages like Ognyanovo and Razlog. 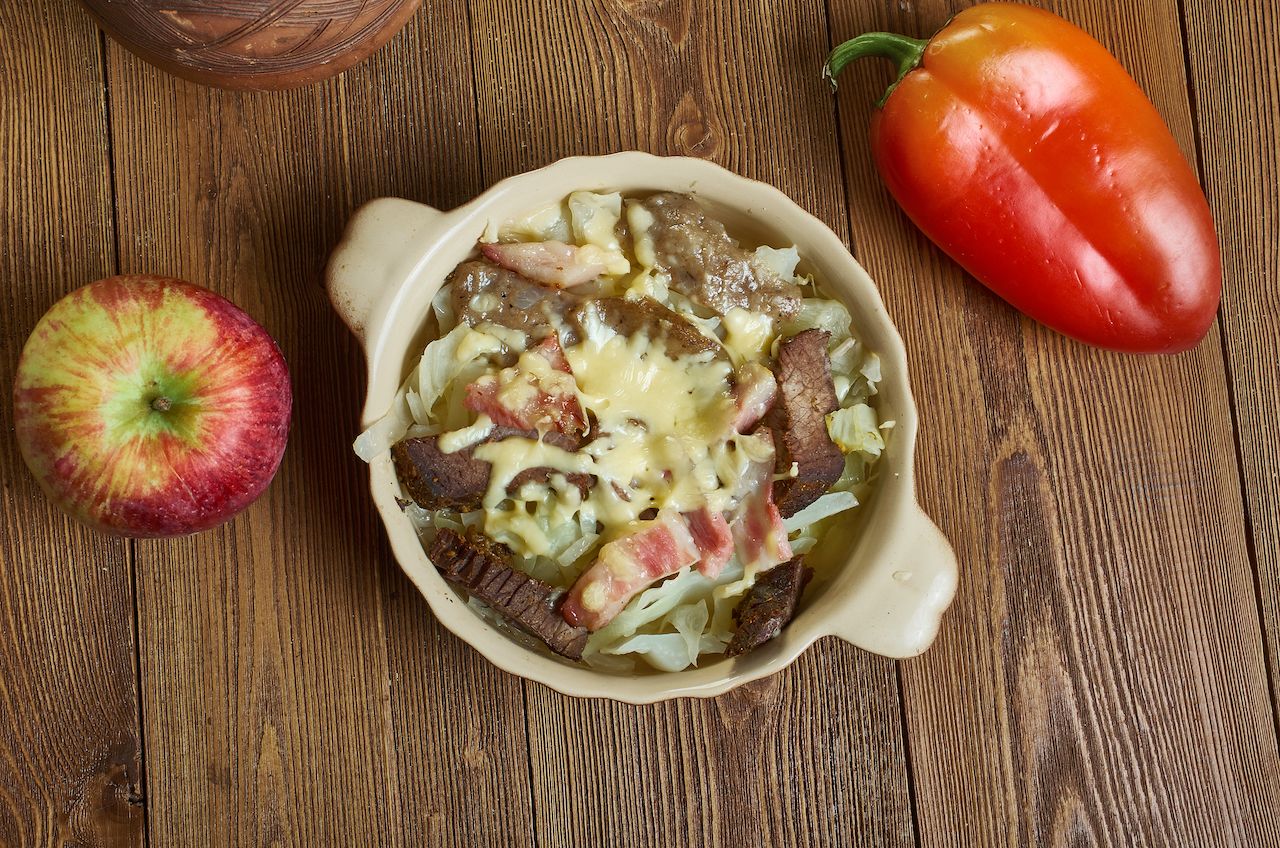 This dish is really heavy on the meat. You layer a round of grape leaves followed by chicken, pork and veal, raw sausage, and repeat. Go for as many layers as you’d like. The typical spices that go into kapama are black pepper, and cumin. You’ll find locals in Bansko and Razlog whipping up kapama like no other.

Bulgarian families love vacationing at the Black Sea for various reasons but they can all agree on this one – the fried tsa tsa. This tiny herring-like fish comes deep fried and generously soaked in lemon juice. It’s absolutely mandatory to have a cold beer with that, you can even give your kids a sip in Bulgaria. 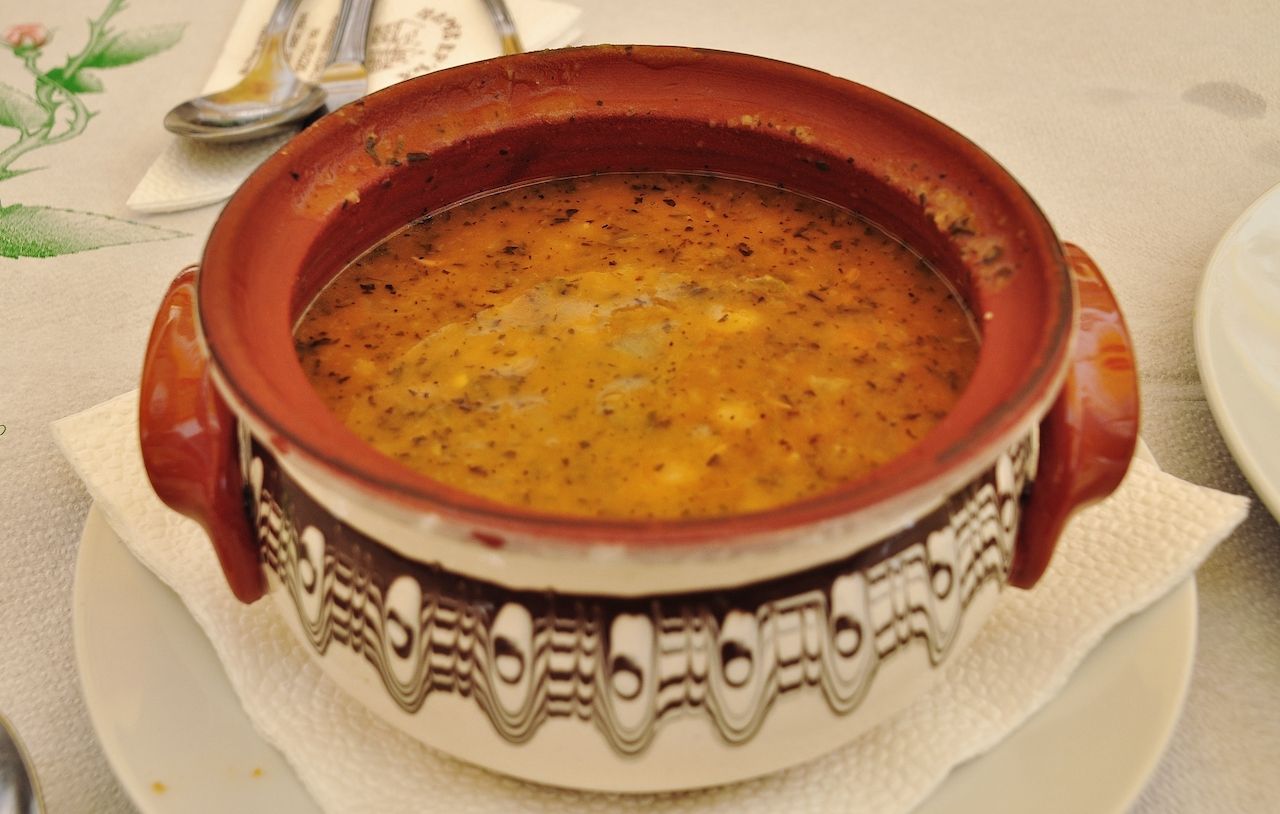 My first experience with this soup was pretty horrifying. I was on the family farm in Godech helping my grandpa cook when all of a sudden, he whipped out this pig’s belly and started skinning it.

Pieces were flying everywhere and the cats were fighting over them. I was sitting in the corner, trying to cover up my nose so I couldn’t smell what was going on. Bulgarians swear that shkembe chorba is the best hangover cure there is, but I wouldn’t know. I never got over that episode.

We, Bulgarians, can be bona fide wildlife encyclopedias. According to my grandmother, you can eat most plants and she often cooks nettles as a proof. I’ve got to admit, this simple soup made with just water and an egg can be very delicious and super healthy. Add crumbled feta cheese to up your game a notch.

My grandmother from Kyustendil always treated me to this delicacy when I behaved myself. She claimed that this sweet, runny jam was made from the spikes of the pine tree and put it on a toasted piece of paper with butter. You can find this jam in southwestern Bulgaria, close to Rila in the Kyustendil and Sandanski region.

If you can’t tell by now, Bulgarians are dairy lovers and that extends even to our soups. Contrary to what you may think, the best way to cool off in the summer is not by eating ice cream. Drink a bowl of tarator instead. This cold yogurt soup is made with cucumbers, salt and dill and is the best way to beat the August heat. 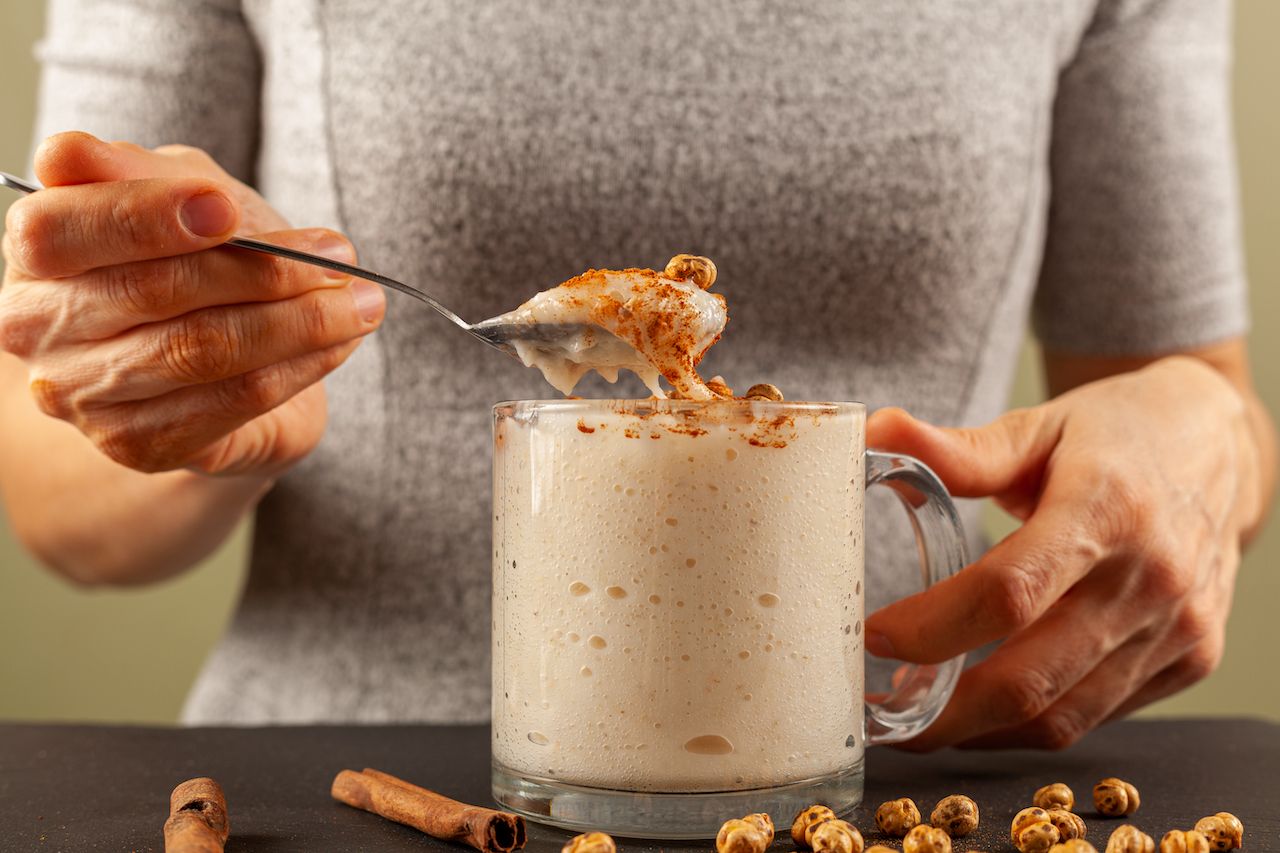 You either love or hate this drink, there’s no middle ground. Boza is very thick and made of flour, sugar, water, all of which ferments on a warm kitchen shelf. The taste is sweet and sour which seems super weird at first, but if you give it a chance, you might actually like it. Boza goes well with banitsa and pastries, and is sold widely in Plovdiv.

Every Bulgarian dentist’s worst nightmare, this sweet, sticky candy is made of sunflower seeds and lots of sugar. Some varieties feature nuts and raisins. The Haskovo region is well-known for its awesome halva so if you’ve got a sweet tooth, include that area as one of your stops in Bulgaria.

Bulgarians ate flowers way before they became a health trend. Karlovo and Khazanlak are two gorgeous valleys in Central Bulgaria where you’ll find massive fields of our roses. We use them to make perfumes and cosmetics, as well as candy and jam. The taste of the jam is like the flower itself – sweet and delicate.

Student Work14 Reasons Bulgaria Is the Most Underrated Country in Europe
Tagged
Food + Drink Bulgaria
What did you think of this story?
Meh
Good
Awesome