Colombia’s constant climate and different altitudes makes it the ideal place to grow fresh fruits, vegetables and other produce all year round. This fresh produce is used to make the best traditional Colombian food, which have been influenced by the country’s indigenous communities, Latin American cuisines, Spanish cuisines and African flavors. Colombia’s city and small-town restaurants often serve meals made with recipes that have been passed down from generation to generation. 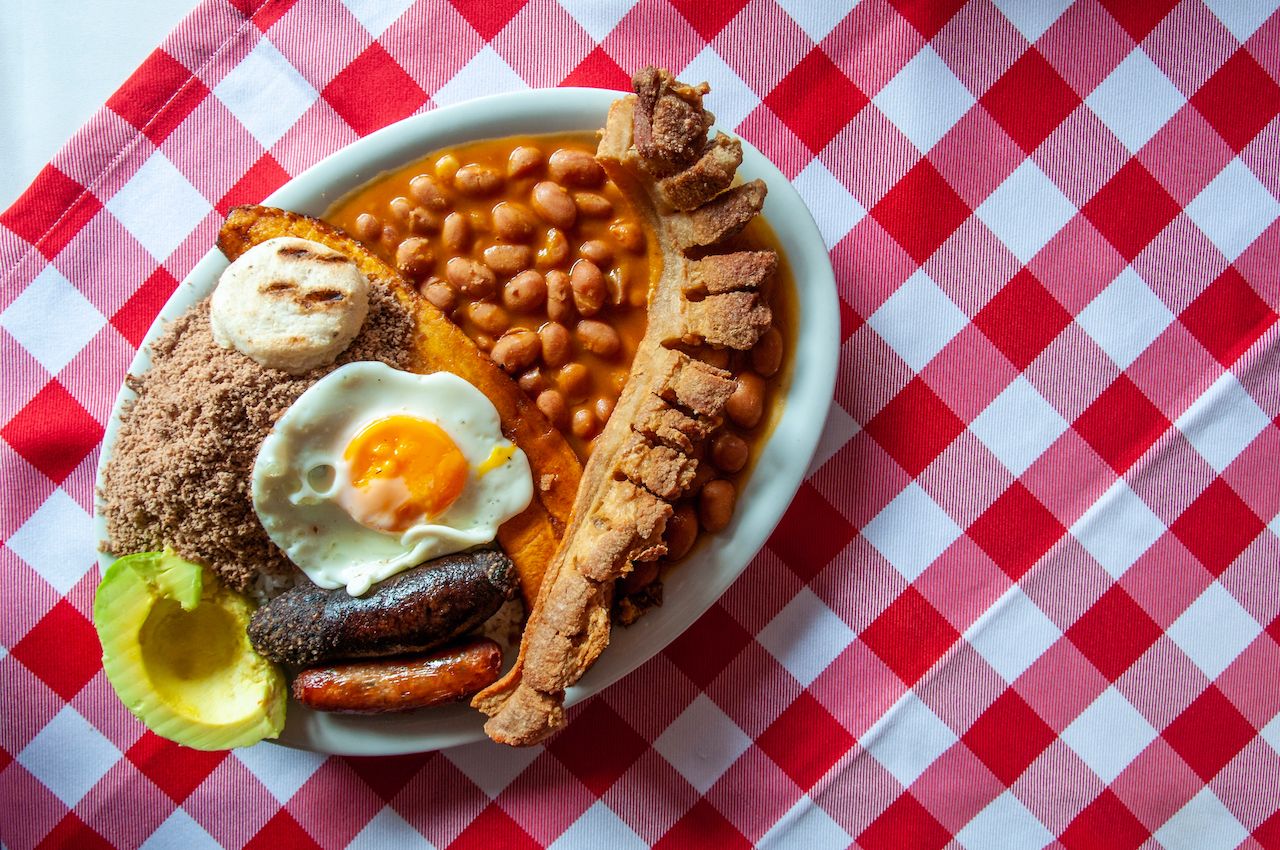 Bandeja paisa (literally ‘workman’s platter’) is a traditional dish from Colombia’s Antioquia region. It contains white rice, red beans, succulent ground beef, fried plantain, chorizo, a corn variety called morcilla, crunchy chicharron (pork crackling), an arepa, and fresh avocado. It is all topped with a fried egg. This dish is often served as a full plate or half portion, and can be enjoyed at Hacienda, (http://www. restaurantehacienda.com) which has four restaurants located in the Medellín area of Colombia. 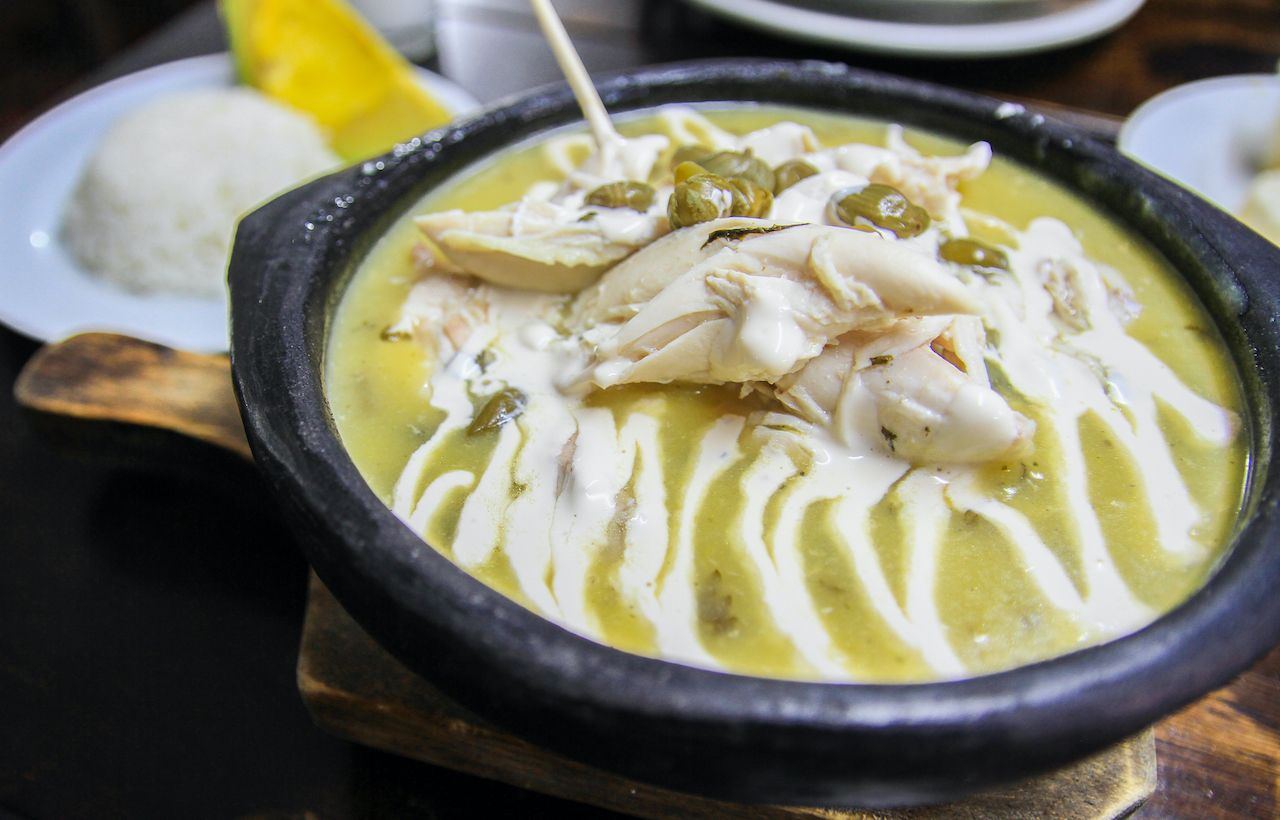 Ajiaco is a traditional white soup served in the country’s capital, Bogotá, and other parts of the Andes mountain region of Colombia — where cold weather calls for a warm meal. Traditional ajiaco is prepared with chicken, three variety of potatoes, and guasca herbs. It is often served with white rice, corn and a slice of avocado. A uniquely decorated restaurant with a great atmosphere that serves ajiaco, is the Bolero San Francisco in Downtown Bogotá. 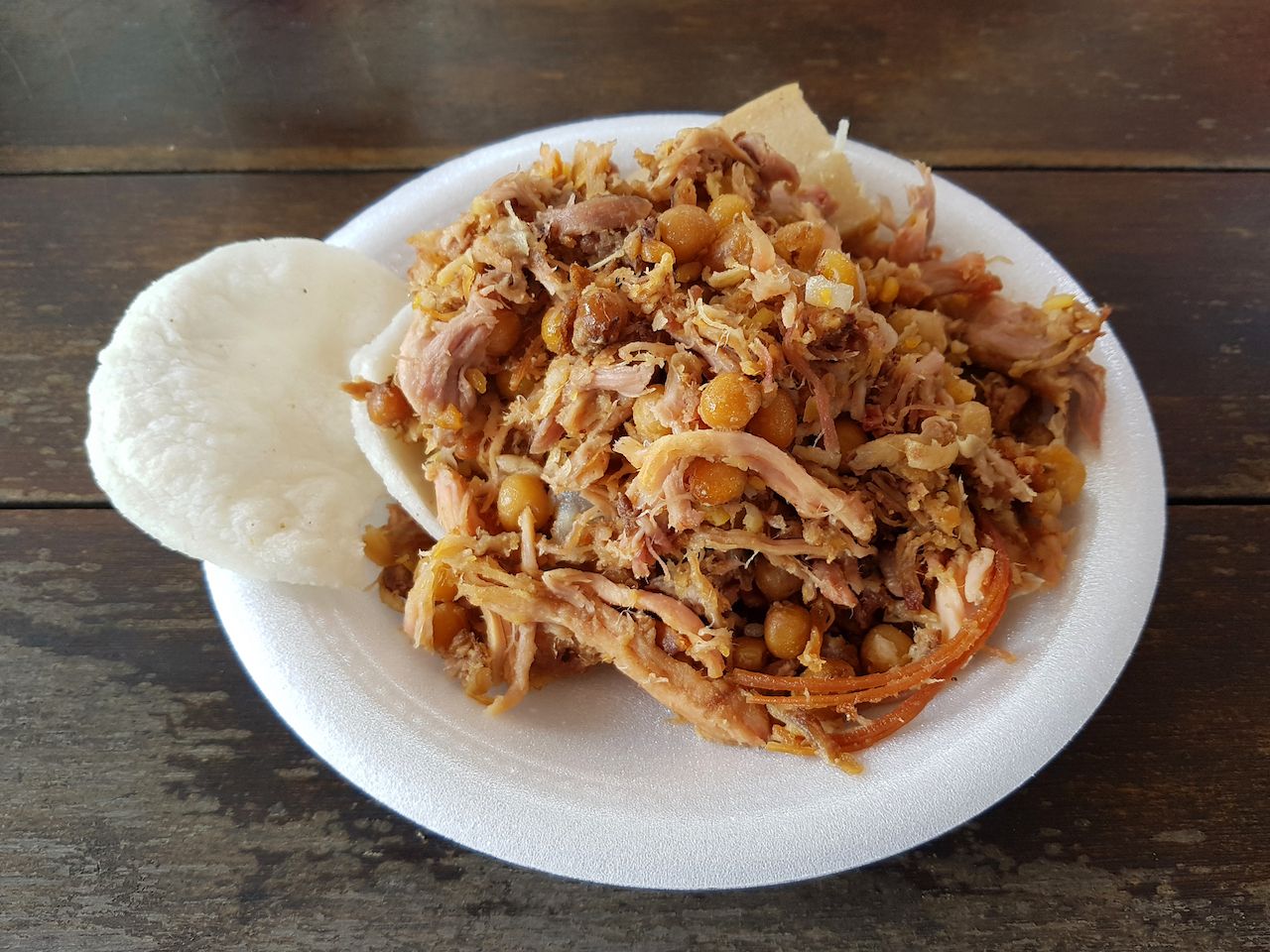 Lechona is a typical Colombian dish from the Tolima region of Colombia. This dish is made from a slow roasted pig, stuffed with yellow peas, rice, and green onion, and slow-cooked for around 10 hours. This dish is often served with arepas and can be traditionally found at events or parties all over Colombia, as well as Tolima. A great home-style restaurant in Bogotá that serves traditionally prepared lechona is La Planchoneria. 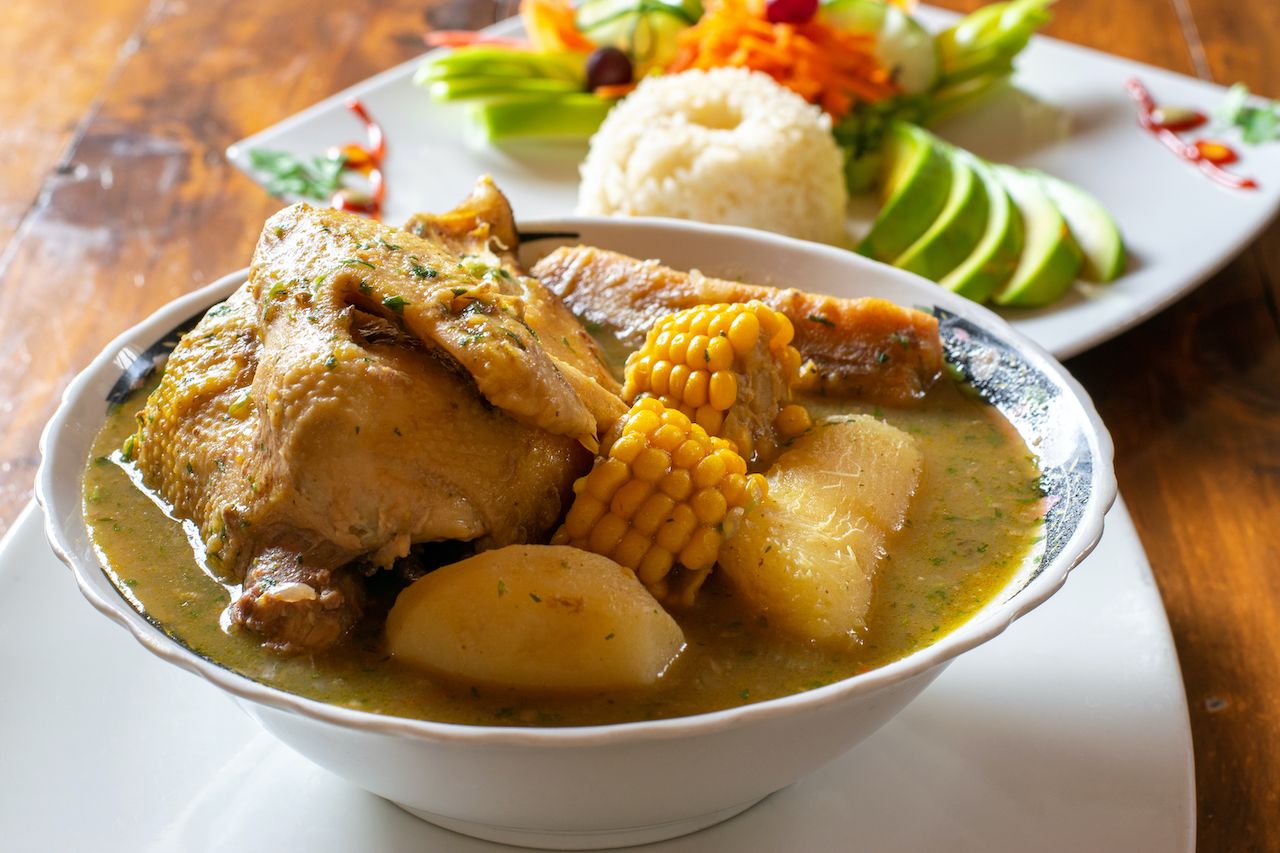 Sancocho is a typical soup from Colombia’s Valle del Cauca, or Cali, region. The soup is water based and contains vegetables, yuca, plantain, potato, corn, cilantro, and either chicken, fish or beef. It is frequently eaten with a slice of avocado and white rice. Sancocho can be sampled at the La Barra restaurant in Cali. 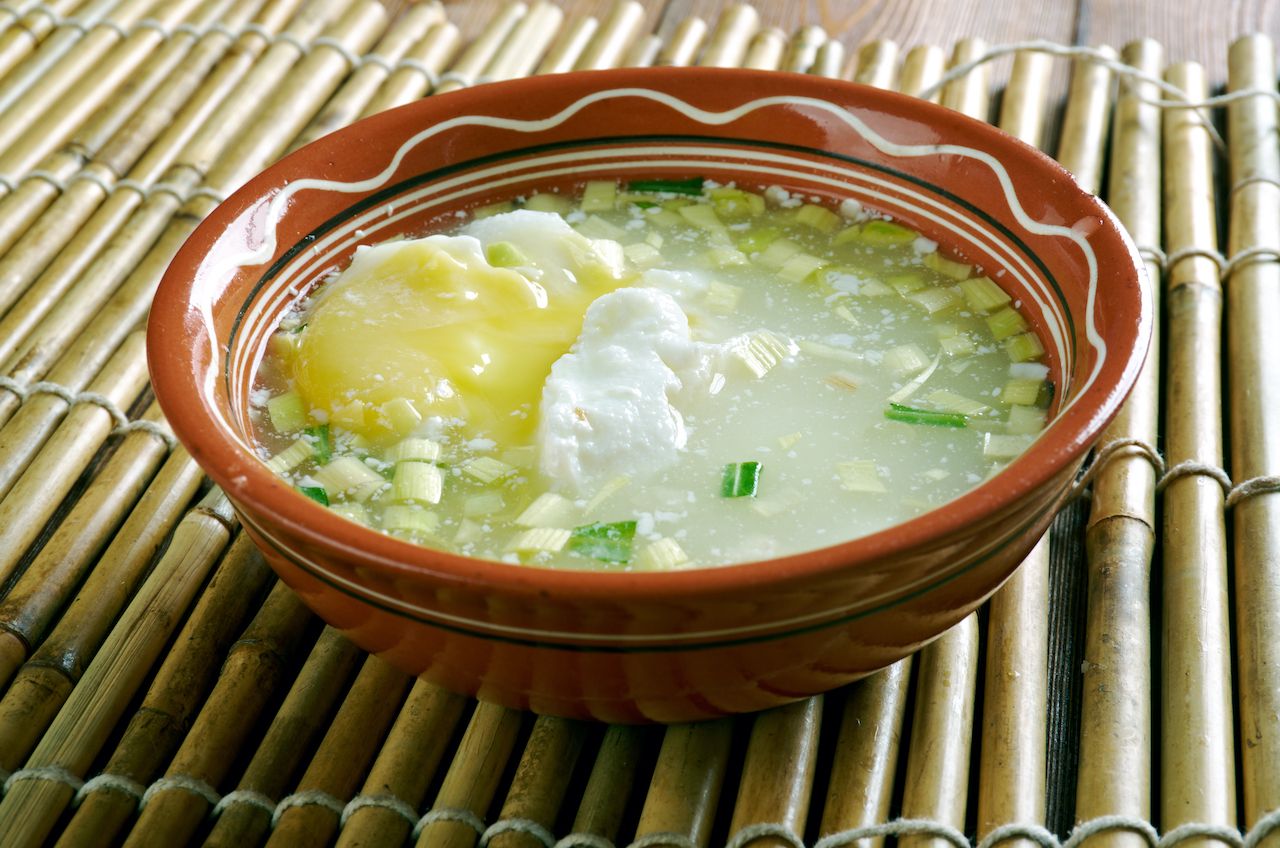 Changua is a hearty breakfast soup originating from the Boyacá and Andes mountains region of Colombia. Changua is a milk-based soup containing chopped onions, egg and coriander. Changua is traditionally served throughout the Colombian Andes region. Pastelería Florida, an 80-year-old bakery in Bogotá, serves some of the best changua in the area. 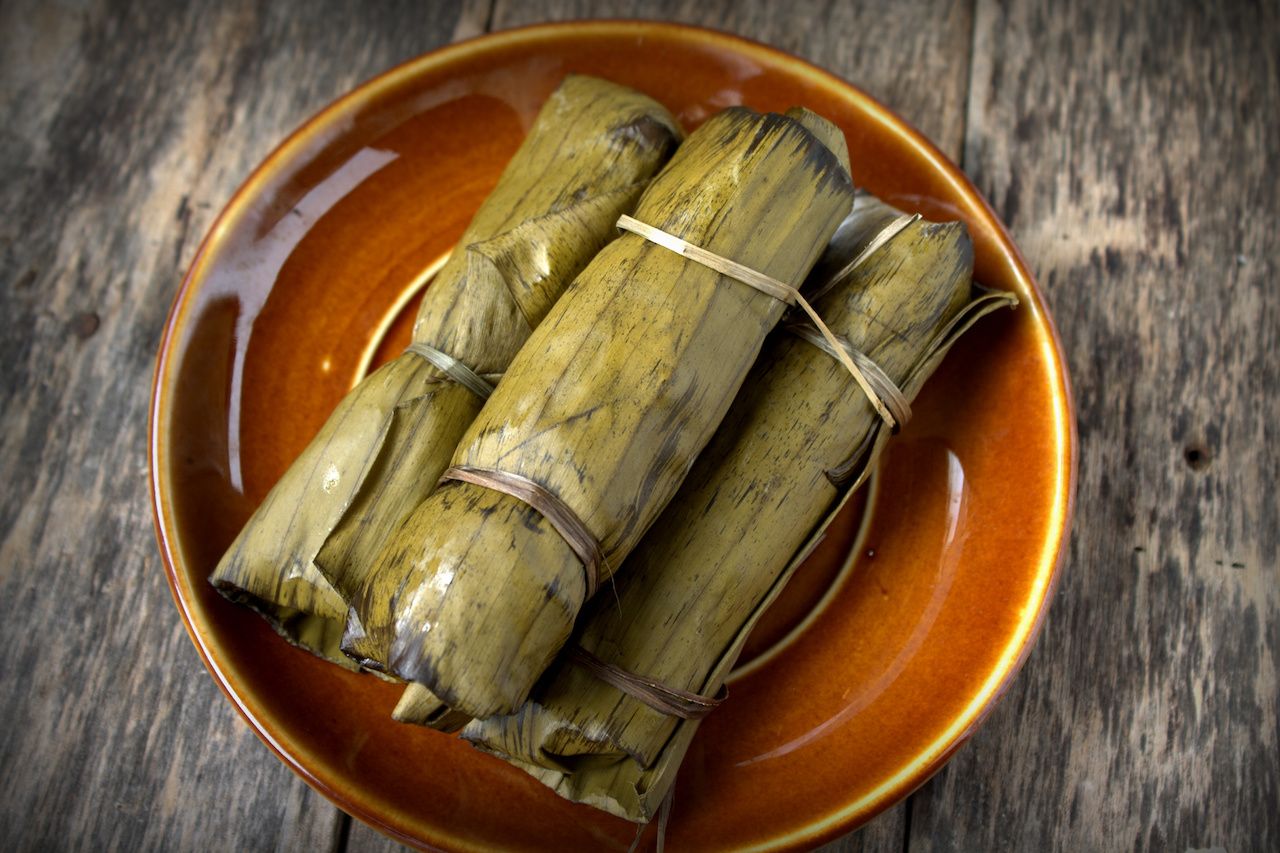 While tamales can be found all over Latin America, Colombia has a unique way of preparing the dish. Tamales‘ ingredients vary depending on the region of Colombia, but the typical tamale is prepared with a corn based dough which is filled with meats, cheese, fruits, or vegetables (all wrapped and cooked in a plantain leaf, giving it a unique taste). A variety of tamales can be eaten at one of Bogotá’s oldest restaurants in Downtown Bogotá — La Puerta Falsa. 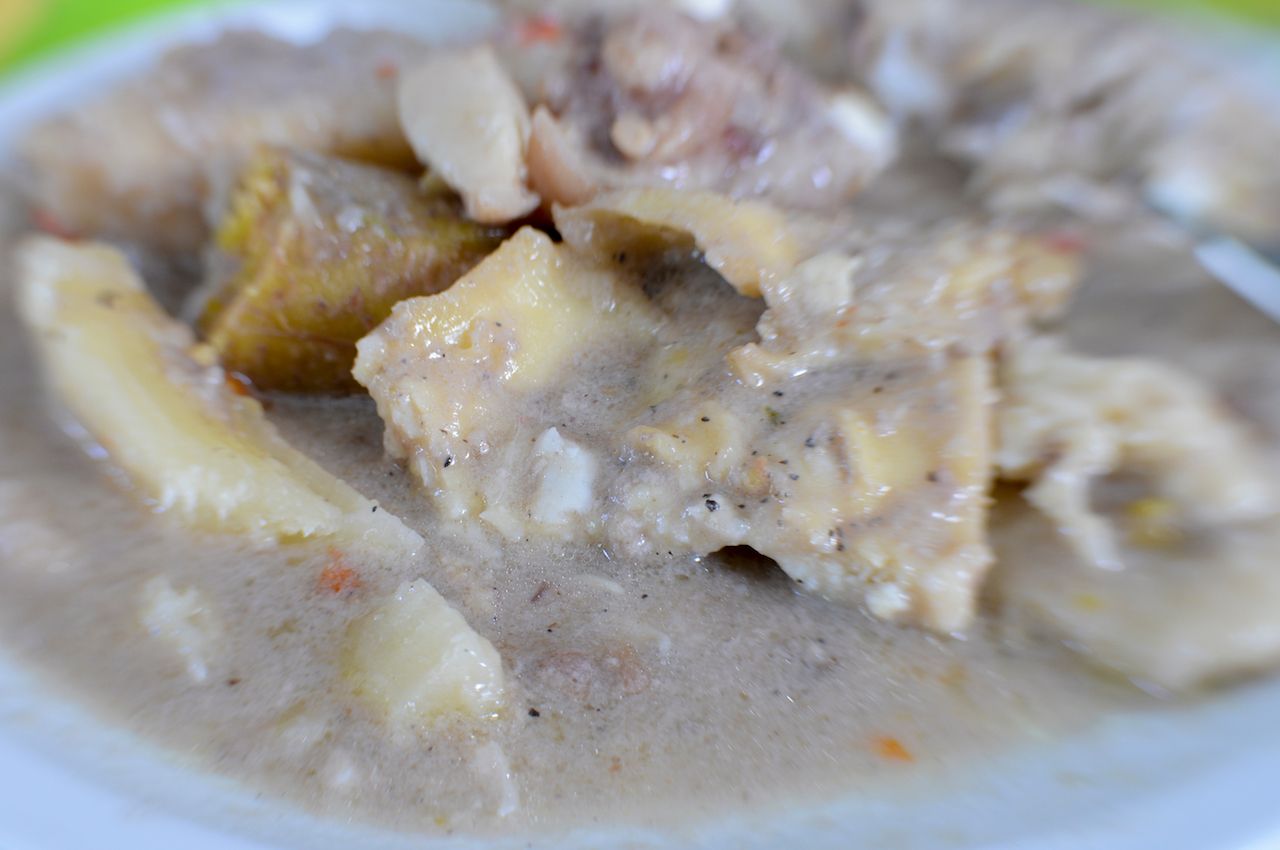 Rondón is an Afro-Caribbean dish typically found on the Caribbean coast and on the off-shore islands. This dish contains coconut rice, fish, yuca, sweet potato, white yams, and snails. The traditional Caribbean restaurant, Miss Celia, on Colombia’s Caribbean island of San Andrés is a good place to find rondón. 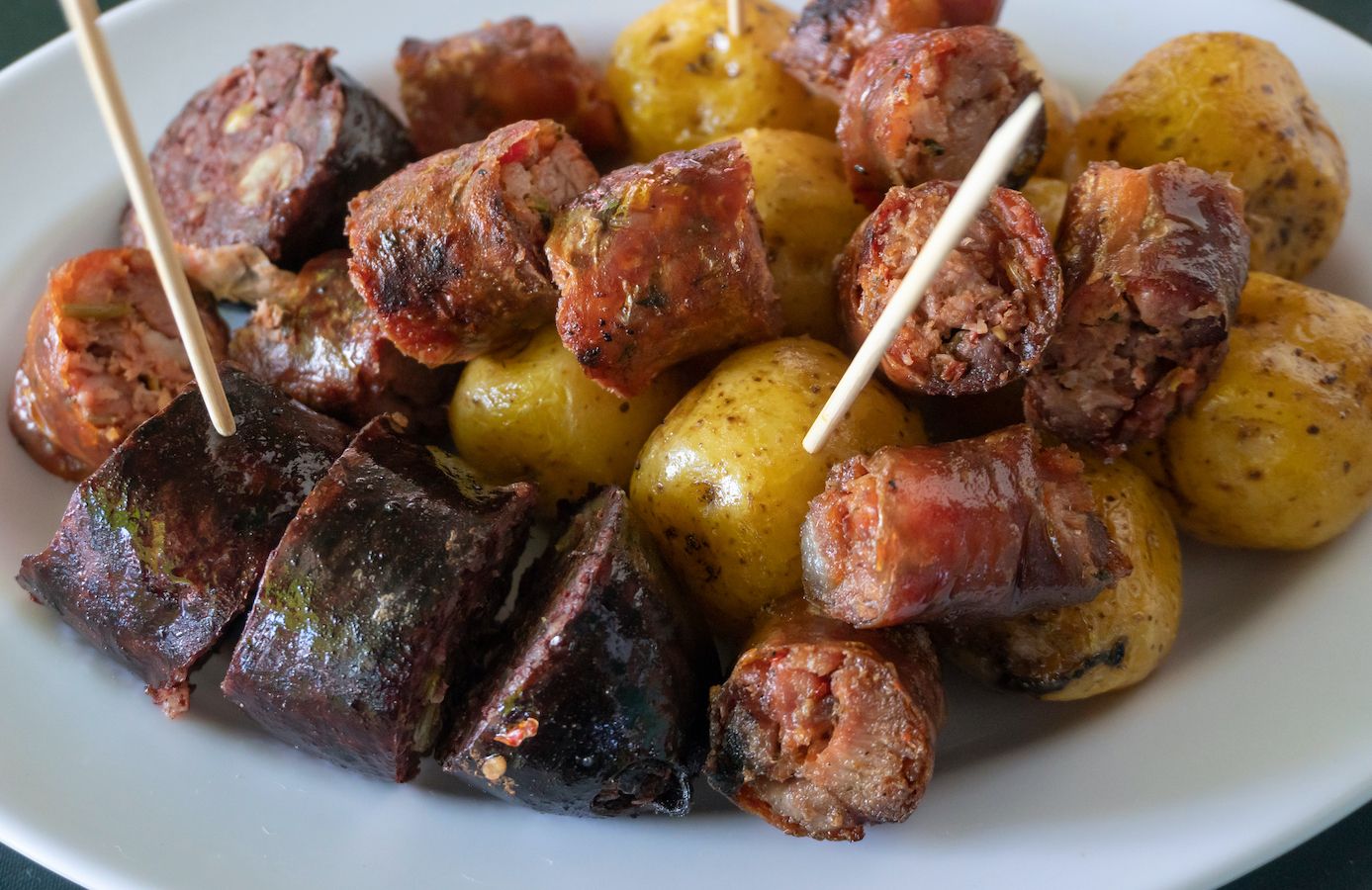 Fritanga is typically eaten at social events all around Colombia. The dish is simply a large variety of meats such as chicken, beef, pork, sausage, and pork cracklings accompanied by corn, arepas, and plantain. This dish is often served in a big basket or plate and shared family style. El Tambor in La Calera, just outside of Bogotá, is a great outdoor area to enjoy a fritanga platter with friends or family in the countryside. 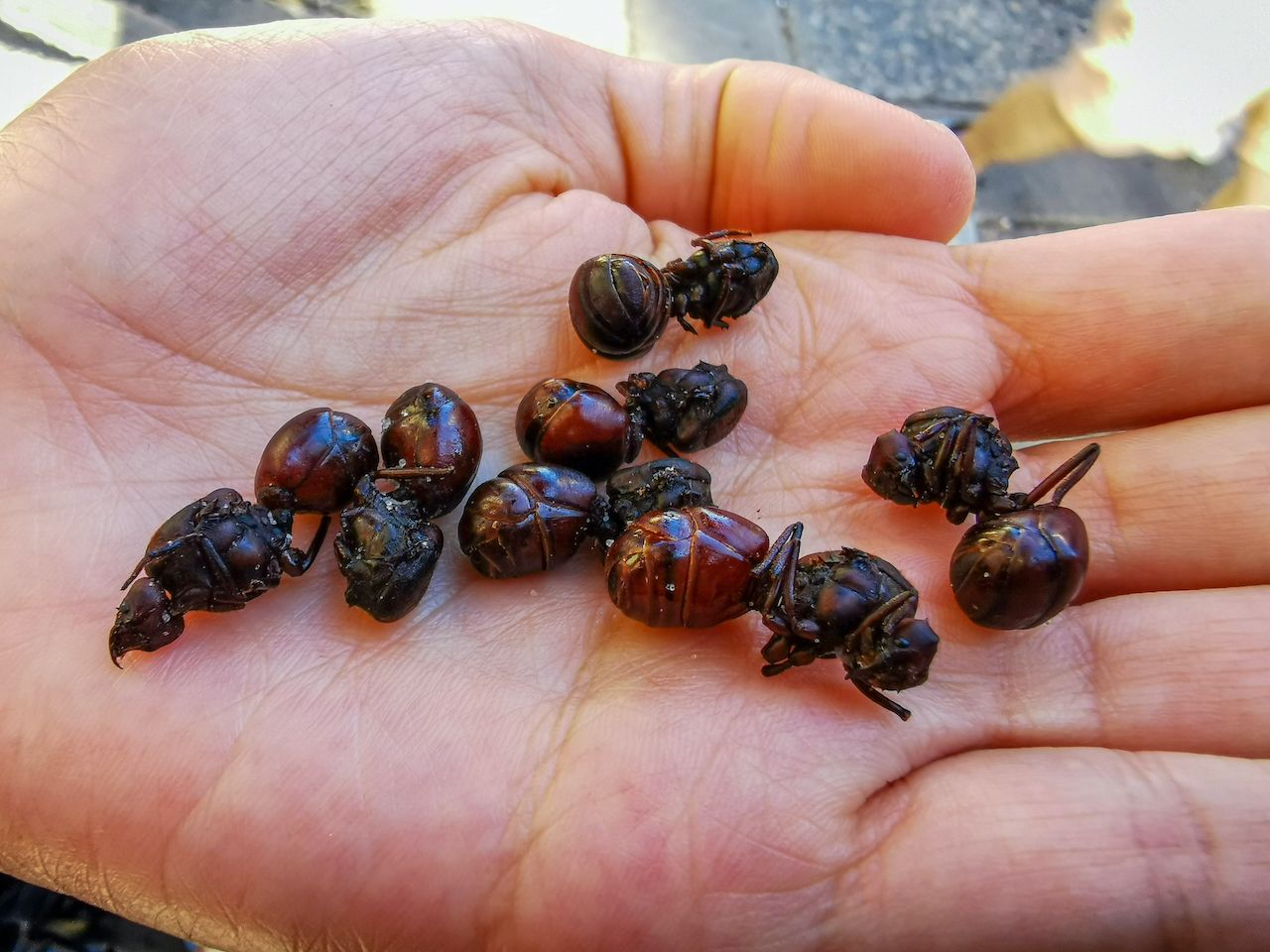 Hormigas culonas (literally ‘big ants’) are a traditional snack from Colombia’s Santander region. This specific variety of ants are larger than usual ants and they are either roasted or fried and then topped with salt or other seasoning. Many people believe these ants contain aphrodisiacal properties and they are also a great source of protein. If you dare to sample this delicacy, a great place to try them is at the Color de Hormiga hostel in the town of Barichara in Santander. 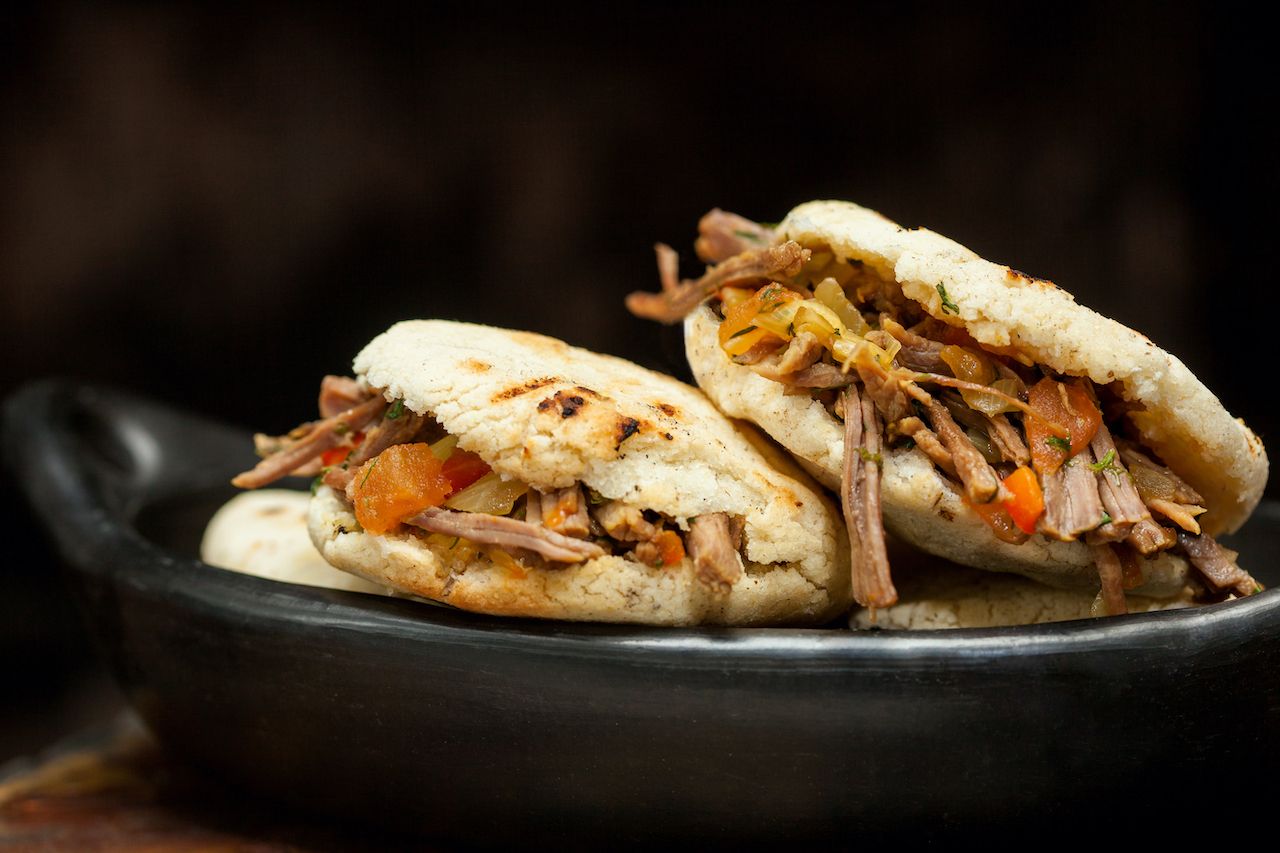 Arepas are corn or wheat flour based. They are traditionally served with a variety of toppings or fillings: you can have an arepa con queso (a cheese stuffed arepa), an arepa boyacense (a traditional variation with cheese originating from the Boyacá region) or an arepa de huevo (a deep fried arepa with an egg cracked inside, from the Caribbean region). 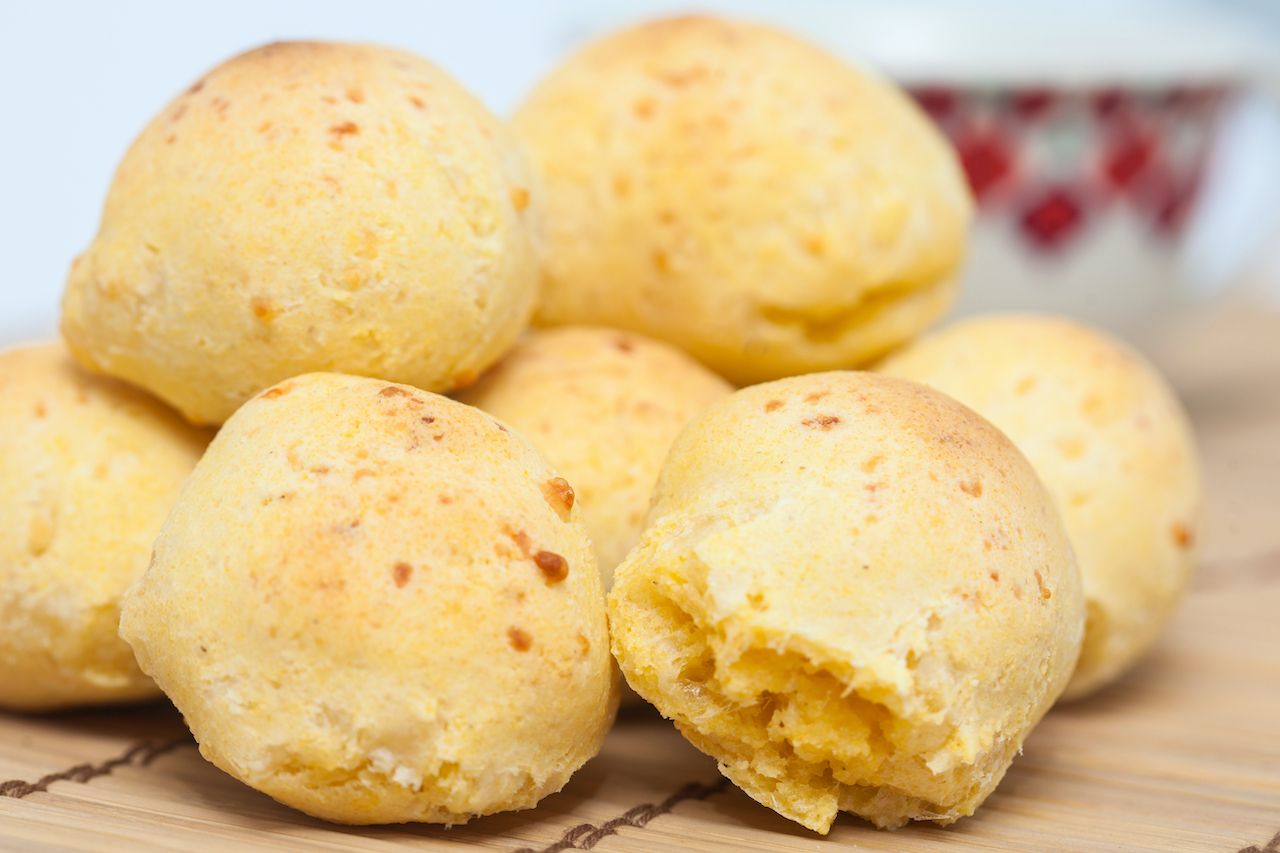 Pandebono is a traditional bread originating from the Valle del Cauca region of Colombia, made from corn flour, yuca starch, cheese, and egg and is occasionally served with guava paste. While pandebono can be sampled in many bakeries all over the country, a great place to try this bread is at La Casa del Pandebono in Valle del Cauca. 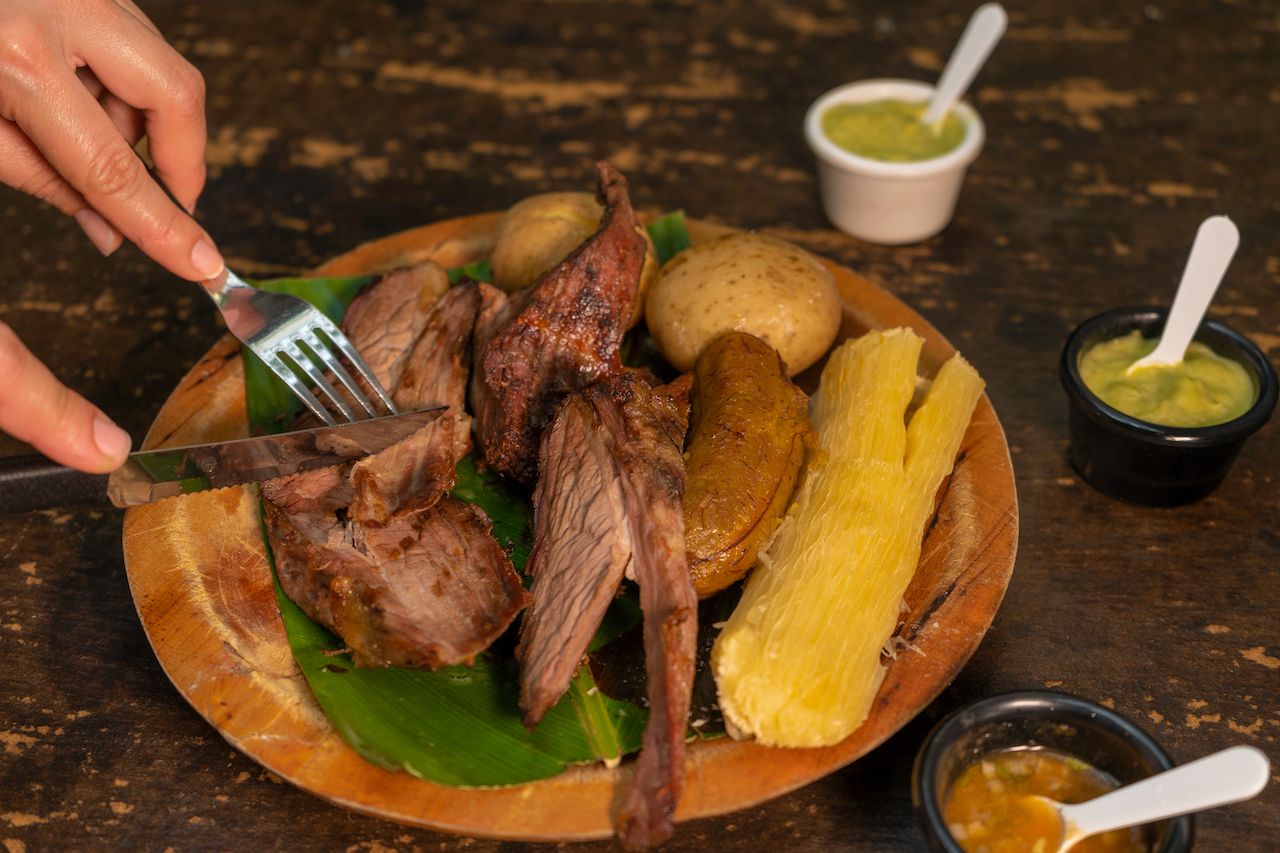 Mamona is a dish traditionally from the Los Llanos and Meta regions of Colombia. It contains veal (often cooked over a bbq or fire) served with potatoes, plantain, yuca and topped with aji. Eating this dish is best as a dinner guest, but a good alternative is at Asadero Capachos in Bogotá. 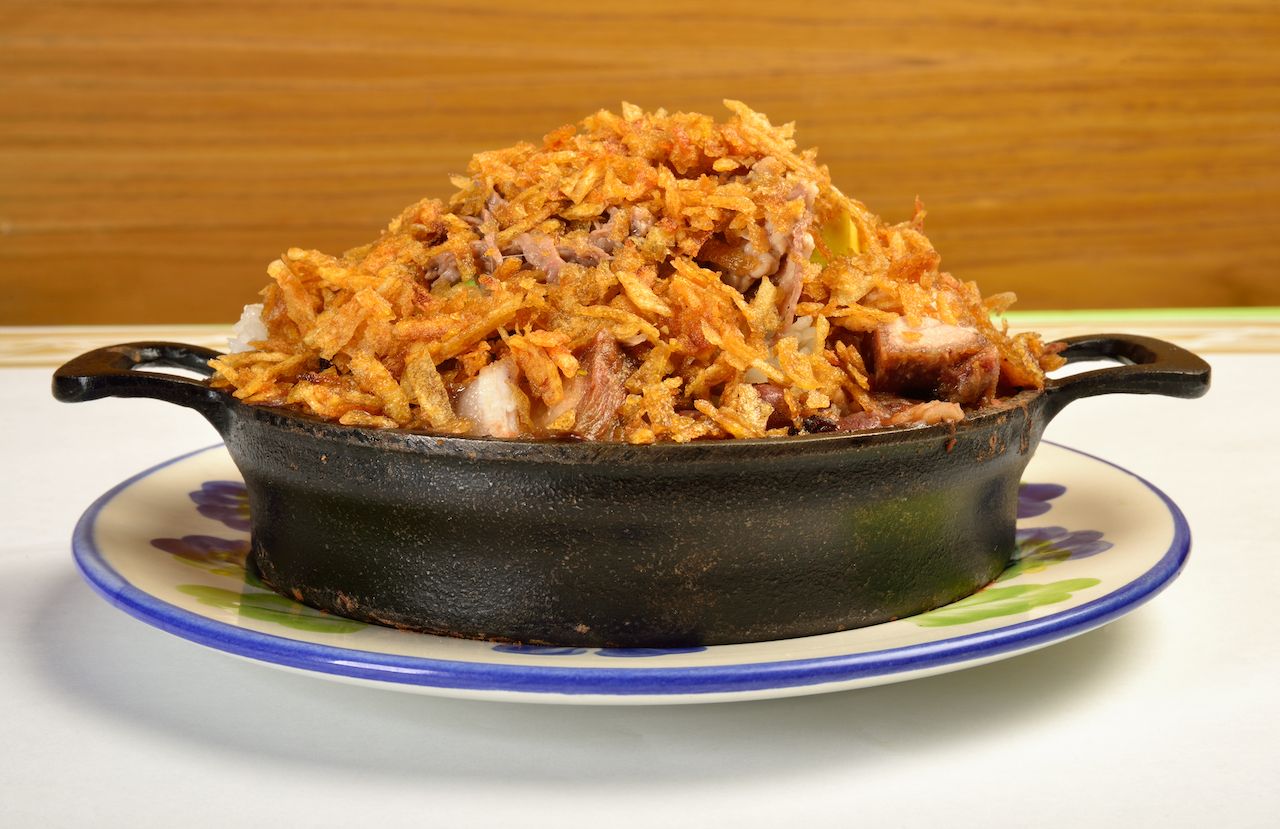 Arroz de lisa is a rice dish from the city of Barranquilla on the Atlantic coast of Colombia. Arroz de lisa usually contains fish (often mullet), coconut rice, onions, aji, vegetables and is often served in a leaf with avocado and chives. Arroz de lisa can be eaten in this Caribbean influenced restaurant in Barranquilla. 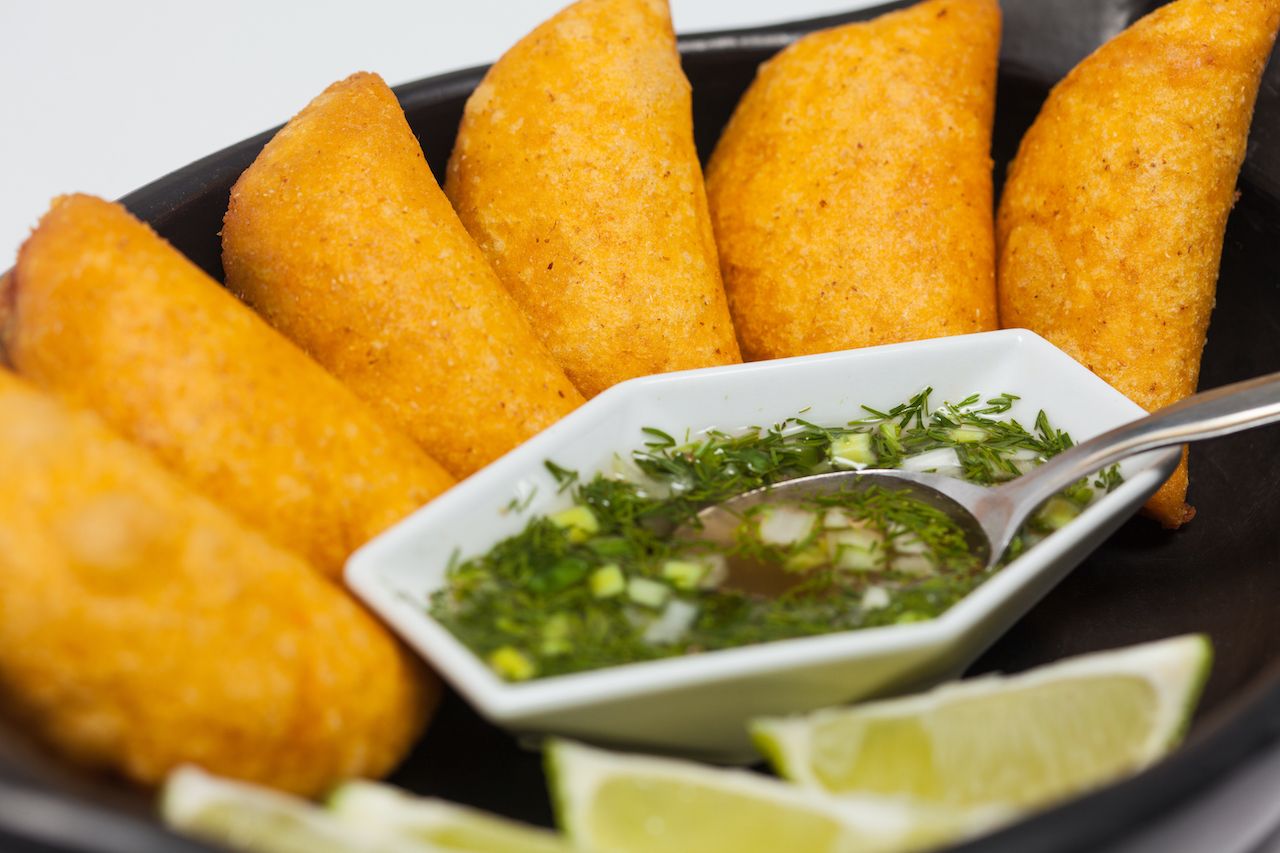 Aji picante has its origins in the Antioquia region of Colombia and is a salsa made from finely chopped tomatoes, onions, coriander, aji pepper and water. Most Colombian restaurants serve their own homemade version of the salsa, but it can also be purchased from Colombian supermarkets — Carulla has a great selection of different aji salsas. 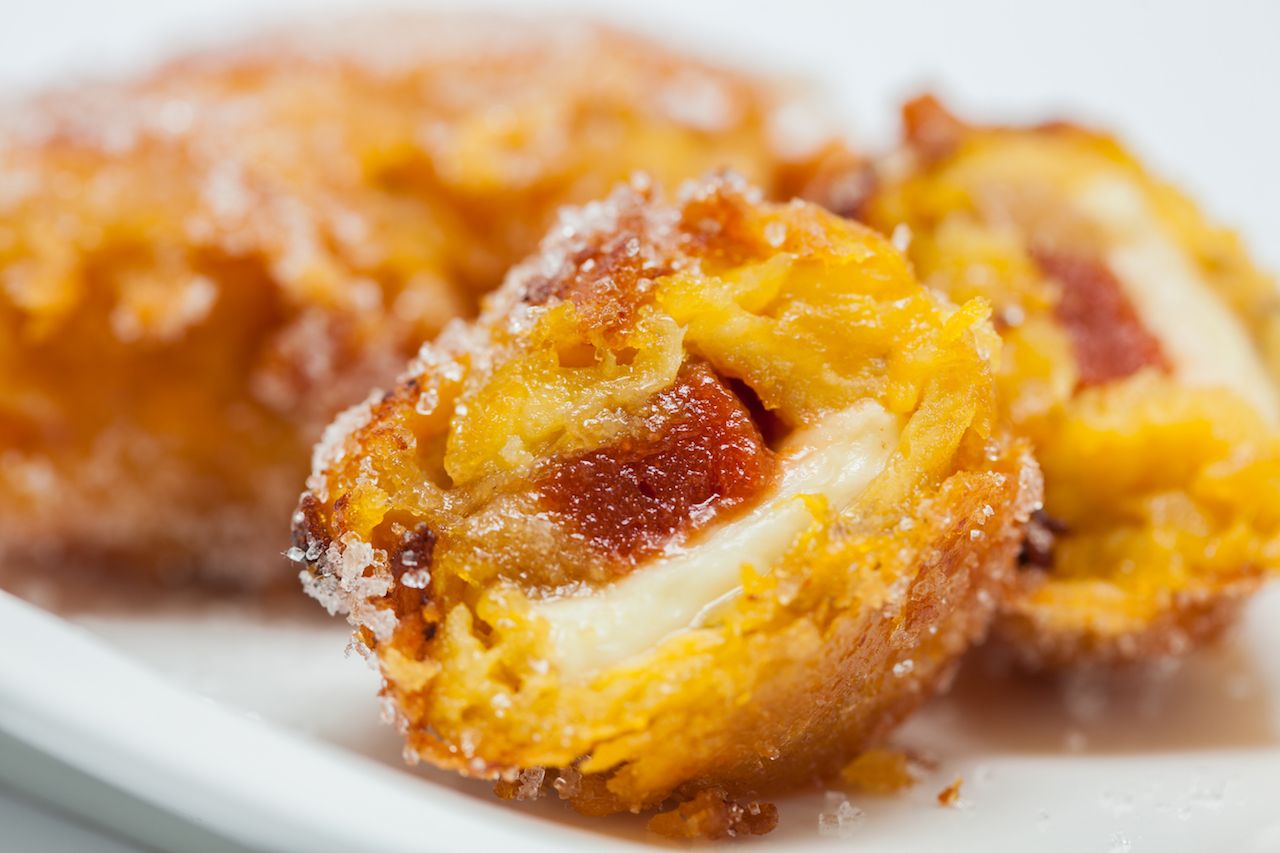 Aborrajado is a sweet or savoury dish originating in Colombia’s Valle del Cauca region. This dish is made from deep fried or baked plantain stuffed with cheese and often guava paste. A Cali regional restaurant chain which serves delicious aborrajado is Apolo Restaurants, with 9 restaurants in the area. 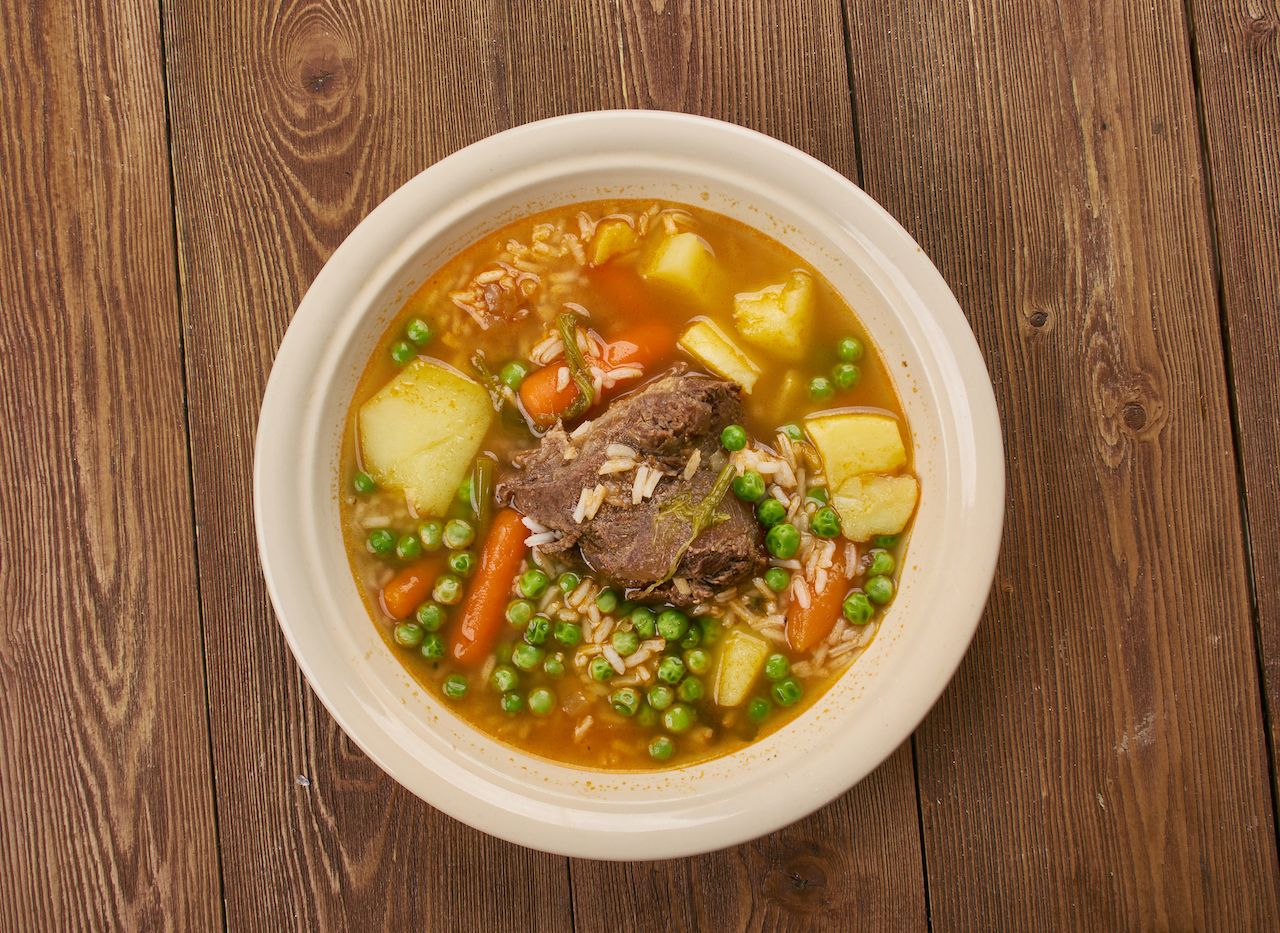 Cuchuco is a filling soup originating from the Boyacá region of Colombia, believed to have originated from the indigenous communities that once inhabited the region. This Colombian food contains corn, barley, mashed beans, peas, carrots, potatoes, cilantro, and garlic. A stylish restaurant and bar in Boyacá which serves this cuchuco is BioMio Lounge Bar and Café. 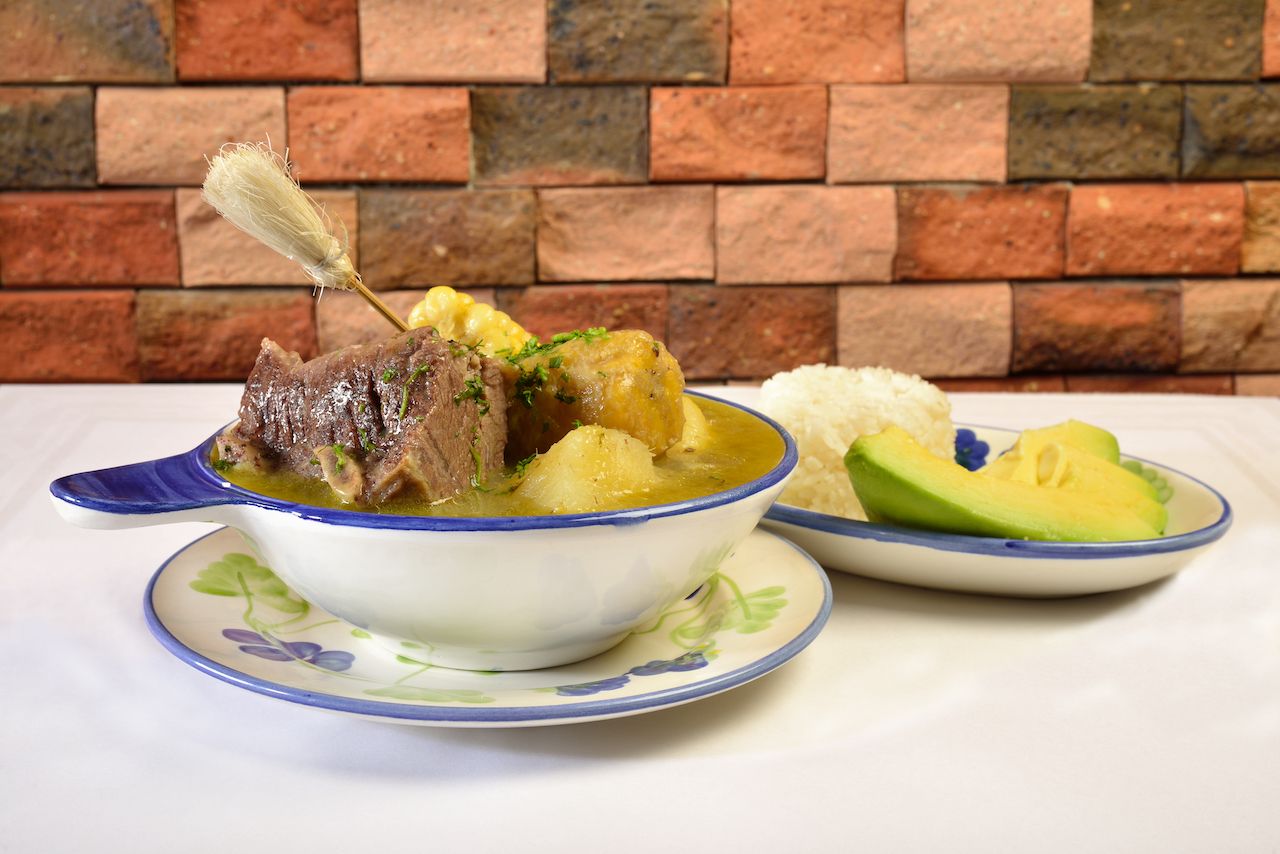 Caldo de costilla is a Colombian family breakfast dish and suggested hangover cure whose recipes have been passed down from generation to generation. It’s a water based soup that contains potatoes, coriander and either beef ribs or a different cut of beef. A great place to sample this dish is at the vibrant and colourful Plaza de Mercado de Paloquemao, in Bogotá. 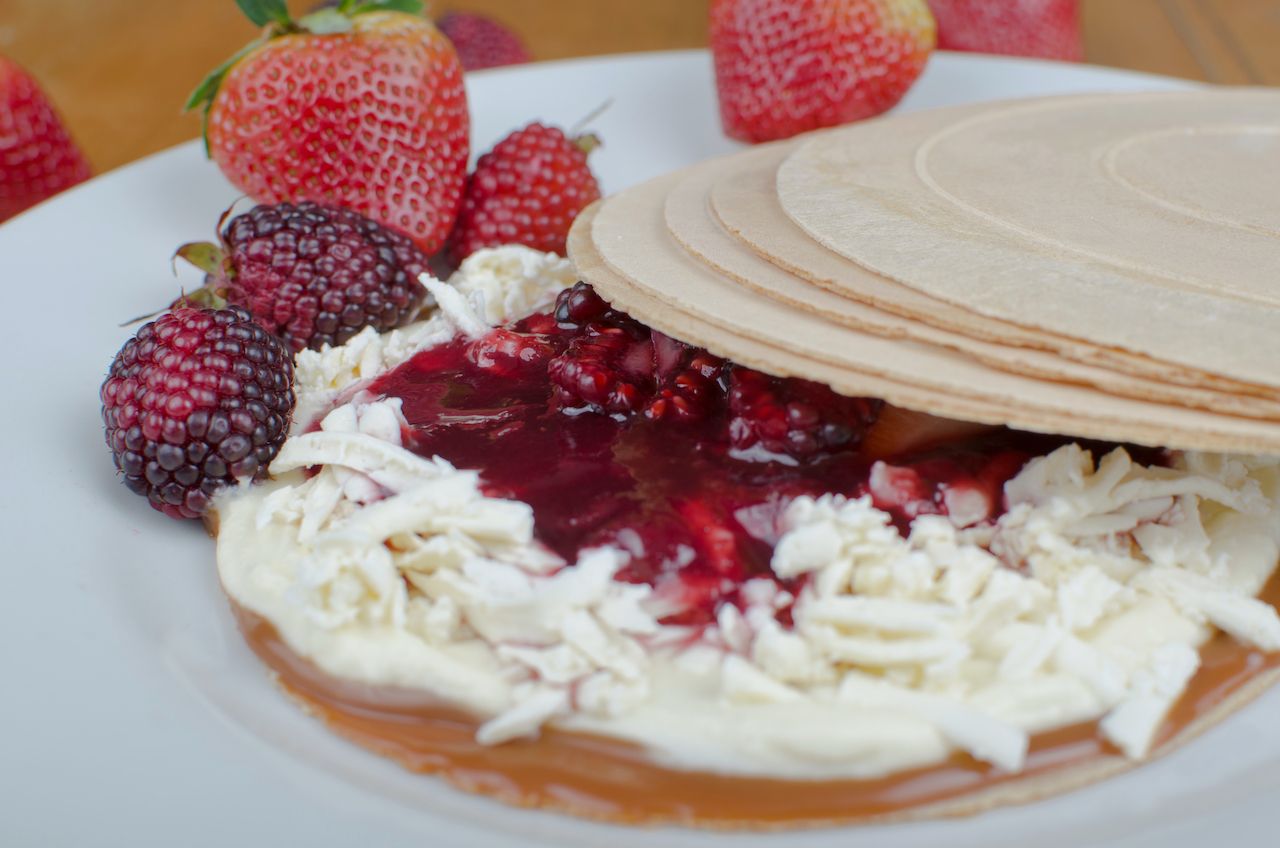 An oblea (wafer) is a typical street dessert found all over Colombia. This dessert is made from two round wafers sandwiched together with a variety of fillings, such as arequipe, jam, chocolate, sprinkles or sugar. A great place to find obleas with a wide range of fillings is in Bogotá’s Plaza Bolívar. 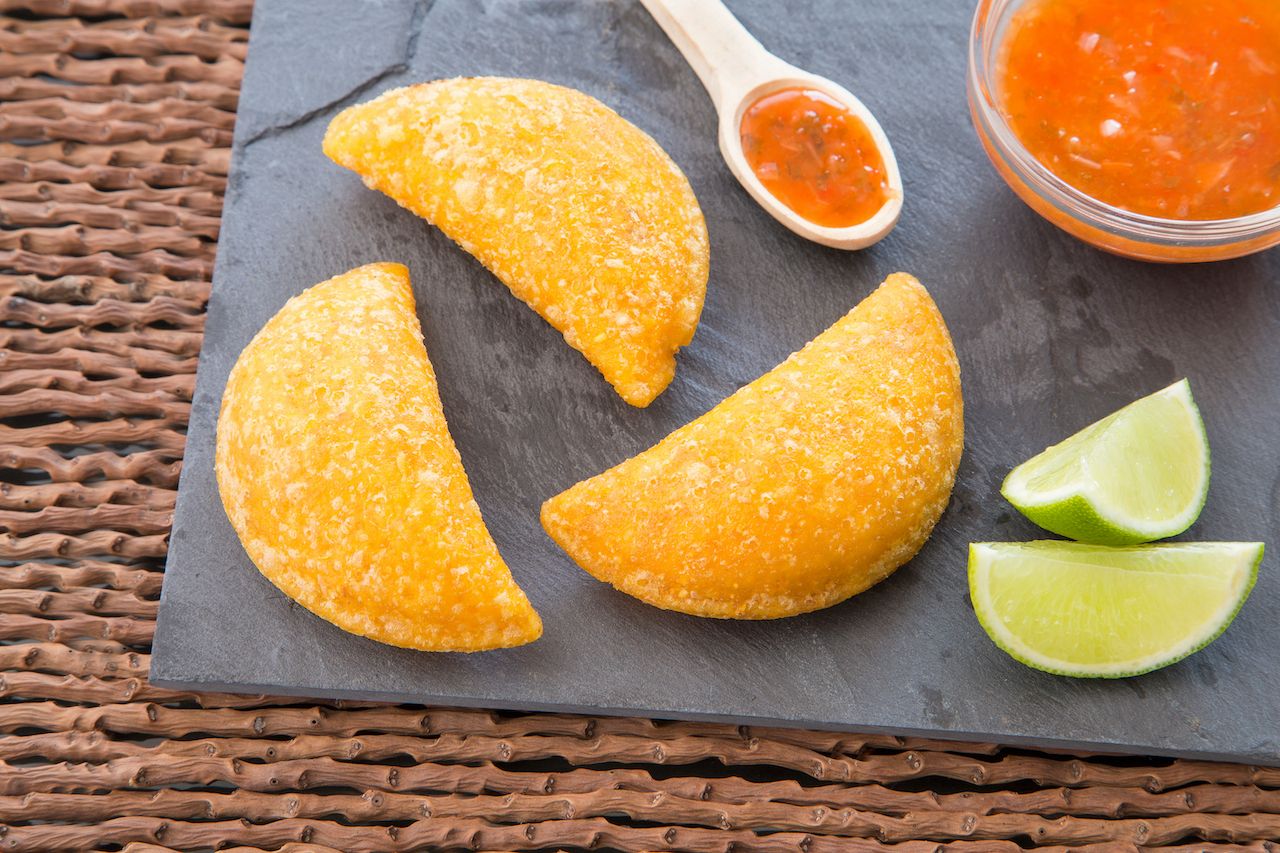 Empanadas can be found all over Latin America but Colombia’s empanadas are deep fried and contain a variety of ingredients including rice, meat, egg, potato or vegetables. Try freshly made empanadas containing a large variety of fillings at La Castaña in Bogotá. 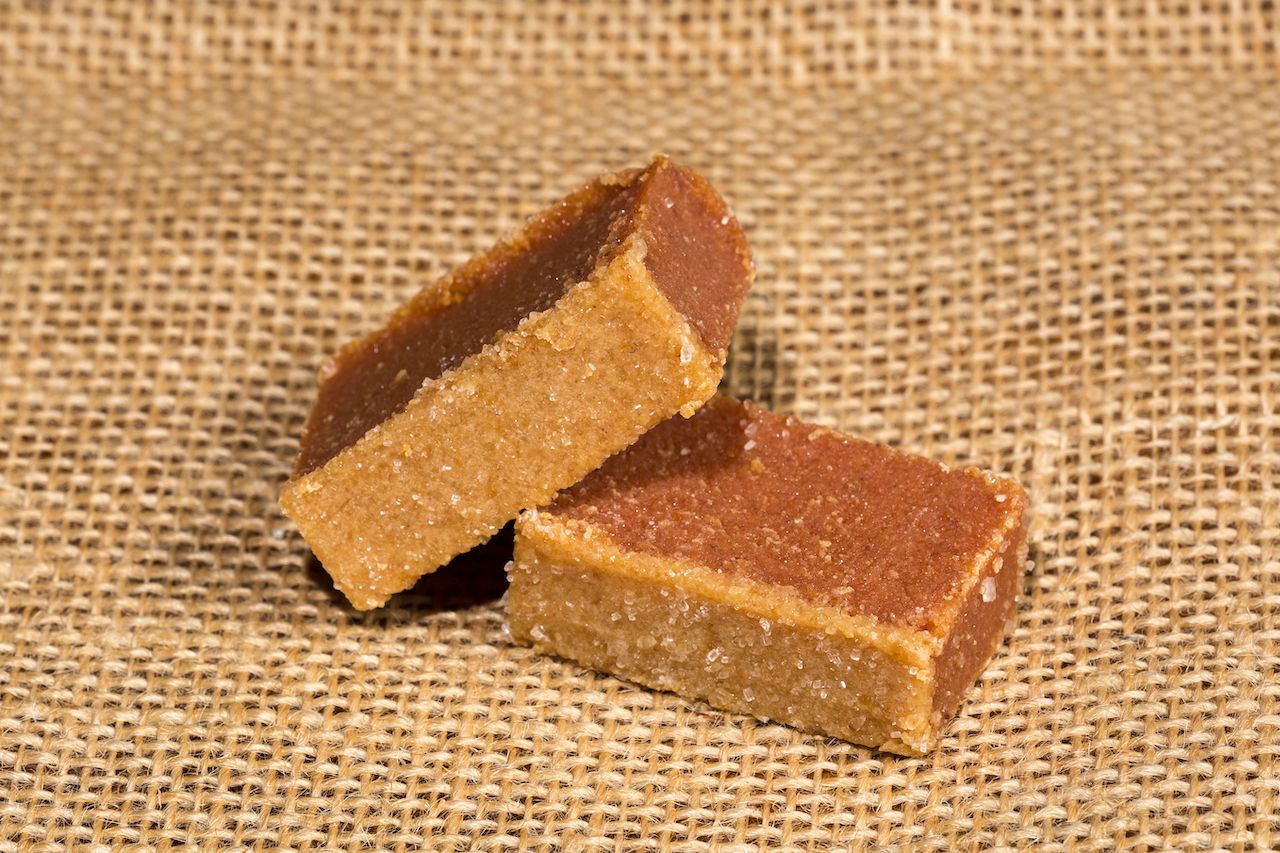 Bocadillo or guava paste is a sweet jam originating from Colombia’s Santander region. This jam is made from guava pulp and panela that have been mixed together and made into small red squares, which are often wrapped in bijou leaves to keep them fresh. Sample and buy bocadillo in its hometown of Velez, Santander. 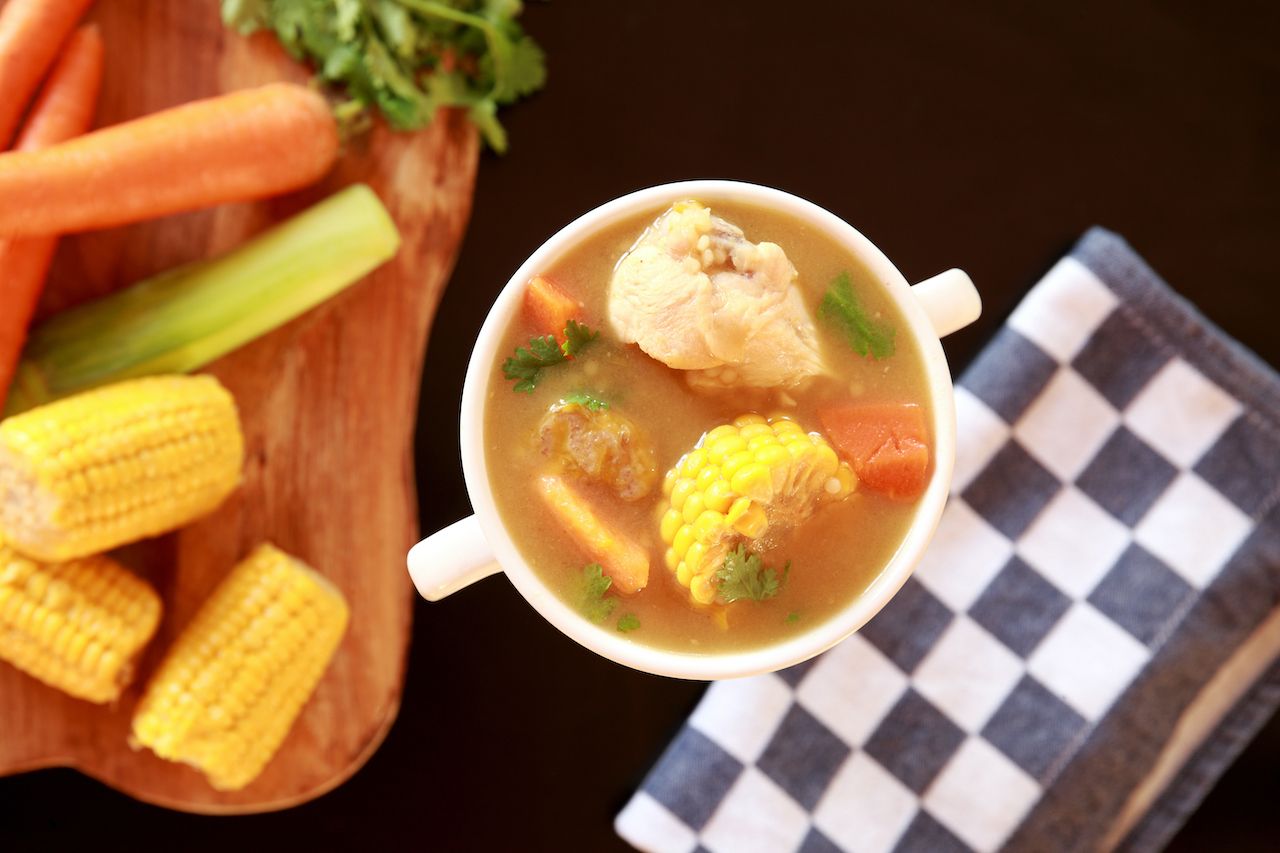 Pollo sudado is a chicken dish traditionally from Colombia’s coastal city of Barranquilla. This Colombian food contains chicken (often legs), which are boiled with potatoes, onions, tomatoes and red pepper, and is typically served with rice. Try pollo sudado at La Principal — a stylish restaurant serving typical food from around Colombia in Bogotá. 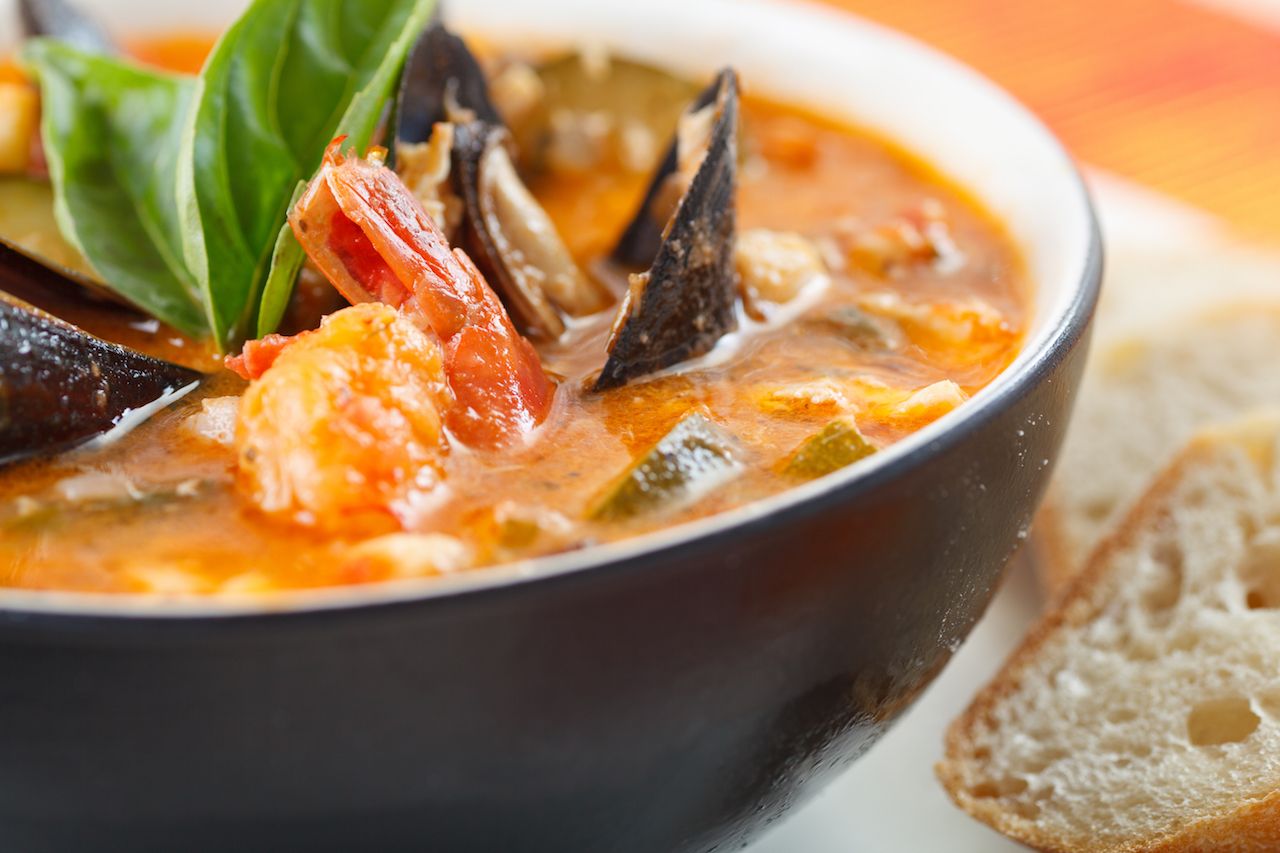 Cazuela de mariscos is a seafood stew typically enjoyed in Colombia’s Caribbean regions. It’s a coconut milk based stew that contains vegetables, spices, shrimp, lobster, prawns, oysters, calamari and other varieties of fish. This seafood filled dish can be eaten at Hatoviejo in Medellín. 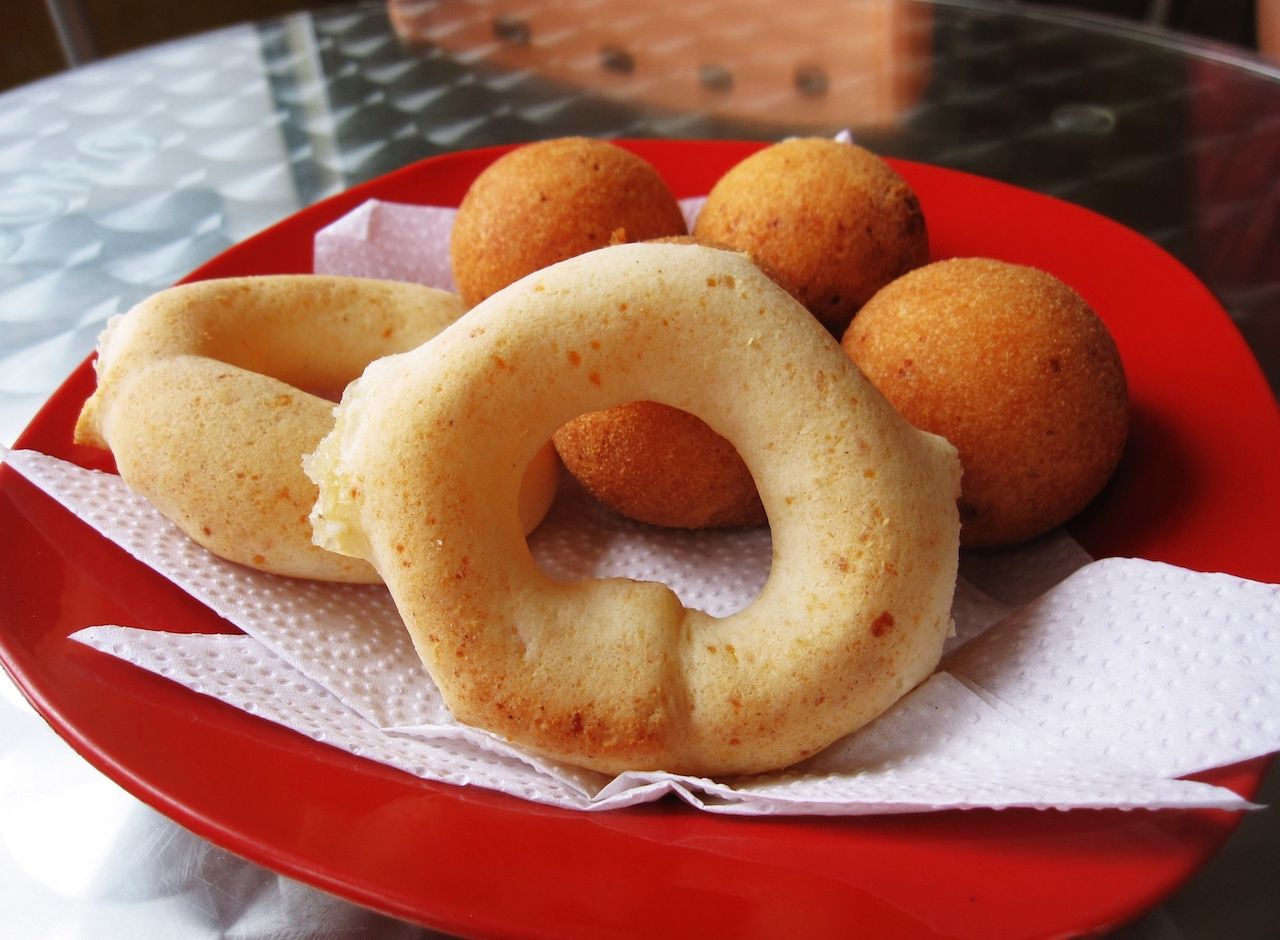 Pan de yuca is a typical bread from the southern regions of Colombia. This Colombian food is made from yuca flour, butter, eggs, and cheese. A great place to buy Pan de Yuca and other typical pastries is at La Casa Bakery Shop in Cali.

Tagged
Food + Drink Colombia
What did you think of this story?
Meh
Good
Awesome