Many people are fans of the Spanish food scene: tapas, paella, churros, but there are lesser-known, every-day Spanish dishes just as, if not more delicious. Here are some of my childhood comfort foods that I think the whole world needs to taste. 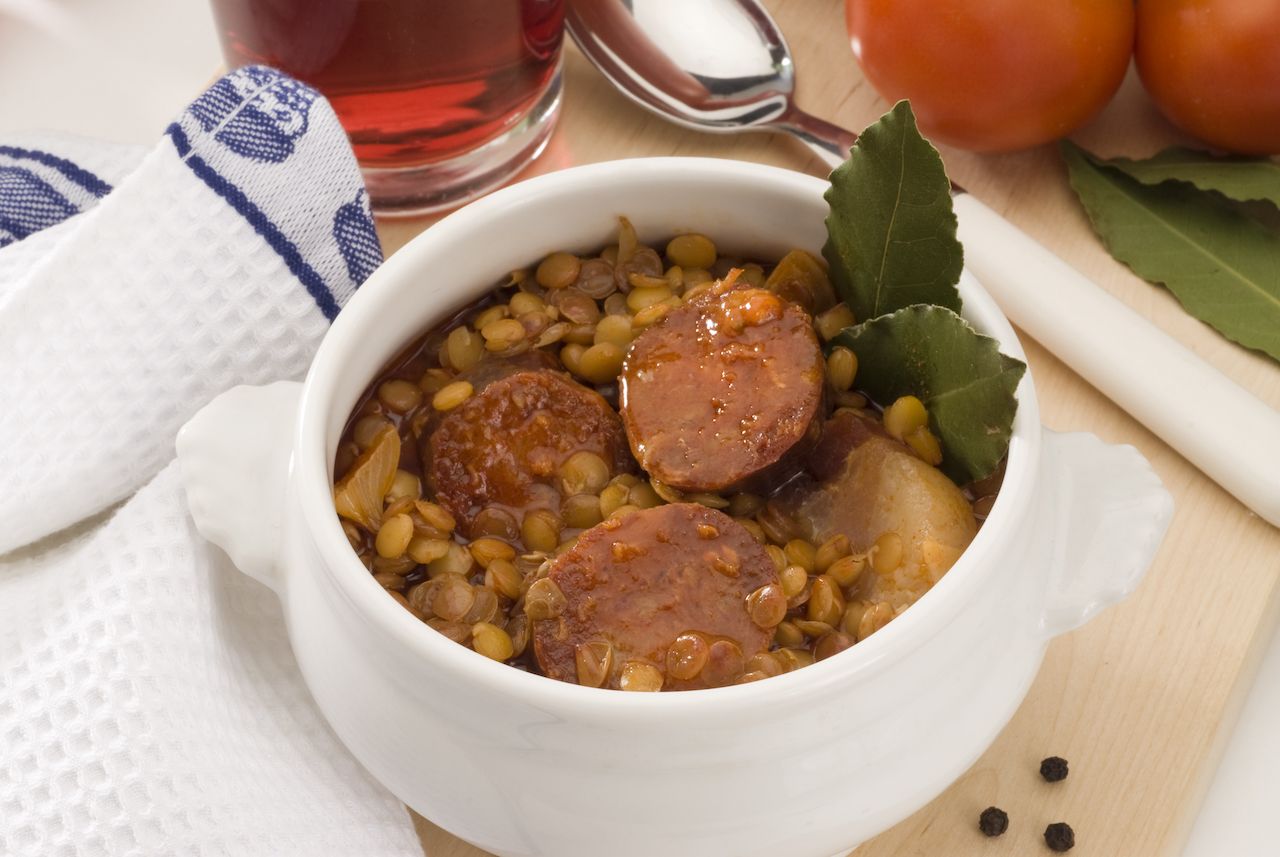 “Lentejas” literally translates to “lentils,” and they remind me of the chilly evenings at my abuela’s house; all of us crowded around the table tucking into a warm, spicy stew with a “barra” of crusty bread and a bottle of red. Lentejas is a lentil stew cooked on a low heat with chunks of Spain’s finest chorizo, a whole bulb of garlic, onions, carrots, potatoes and herbs. 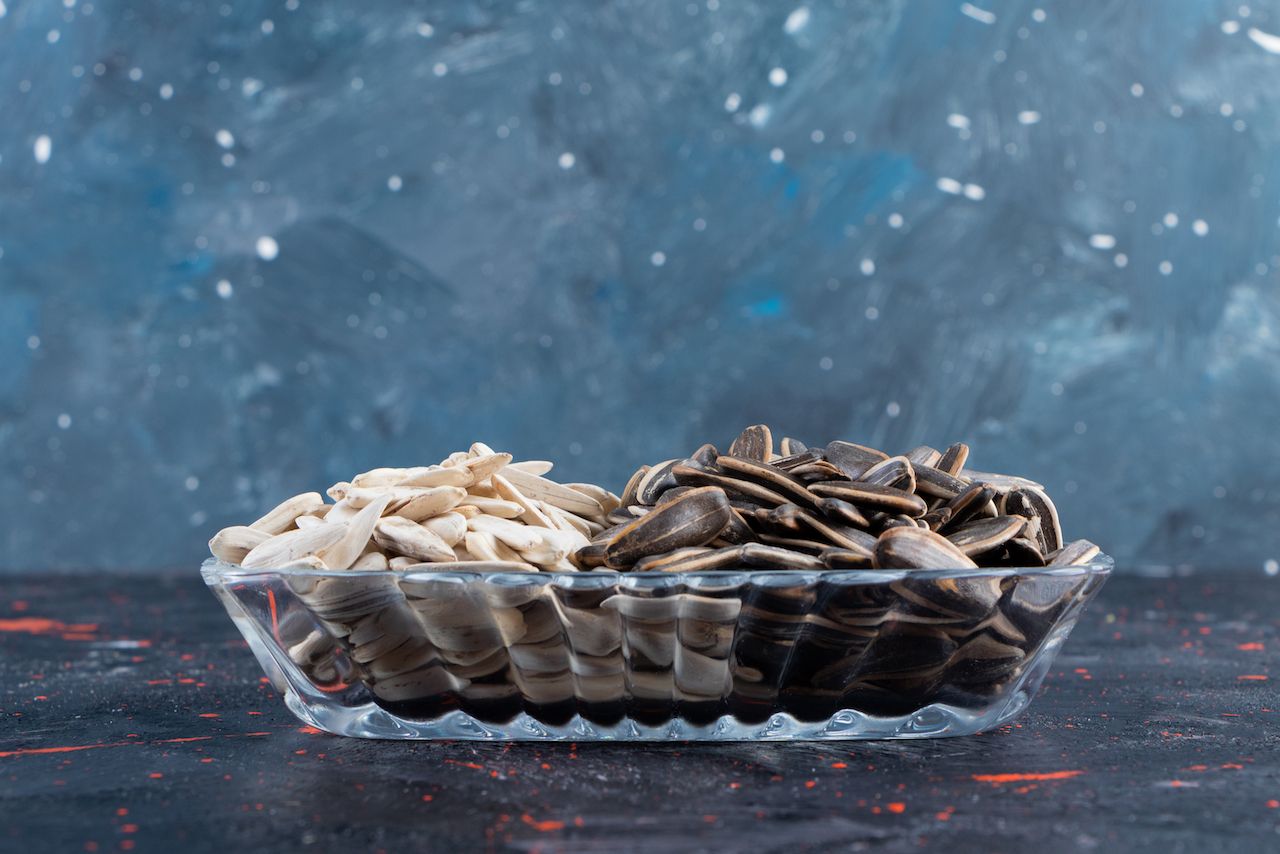 This might just be the best snack in the world, ever. Next time you’re in Spain, take a look at the floor: you’ll spot sunflower seed shells- or pipas– scattered everywhere. Pipas have long been a favorite snack for the Spanish to munch on in the parks while gossiping with the neighbors. Traditionally, they’re roasted in tons of salt. In 2004, Pipas G introduced a new flavor to the nation’s favorite snack: Tijuana, spicy, sticky, bbq-ey, paprika-infused, blow-your-mind sunflower seed. I challenge you to crack open the pipas without using your hands, cracking the seed or getting a shell stuck in your gums; (a skill that has taken me over 10 years to perfect, but totally worth it). 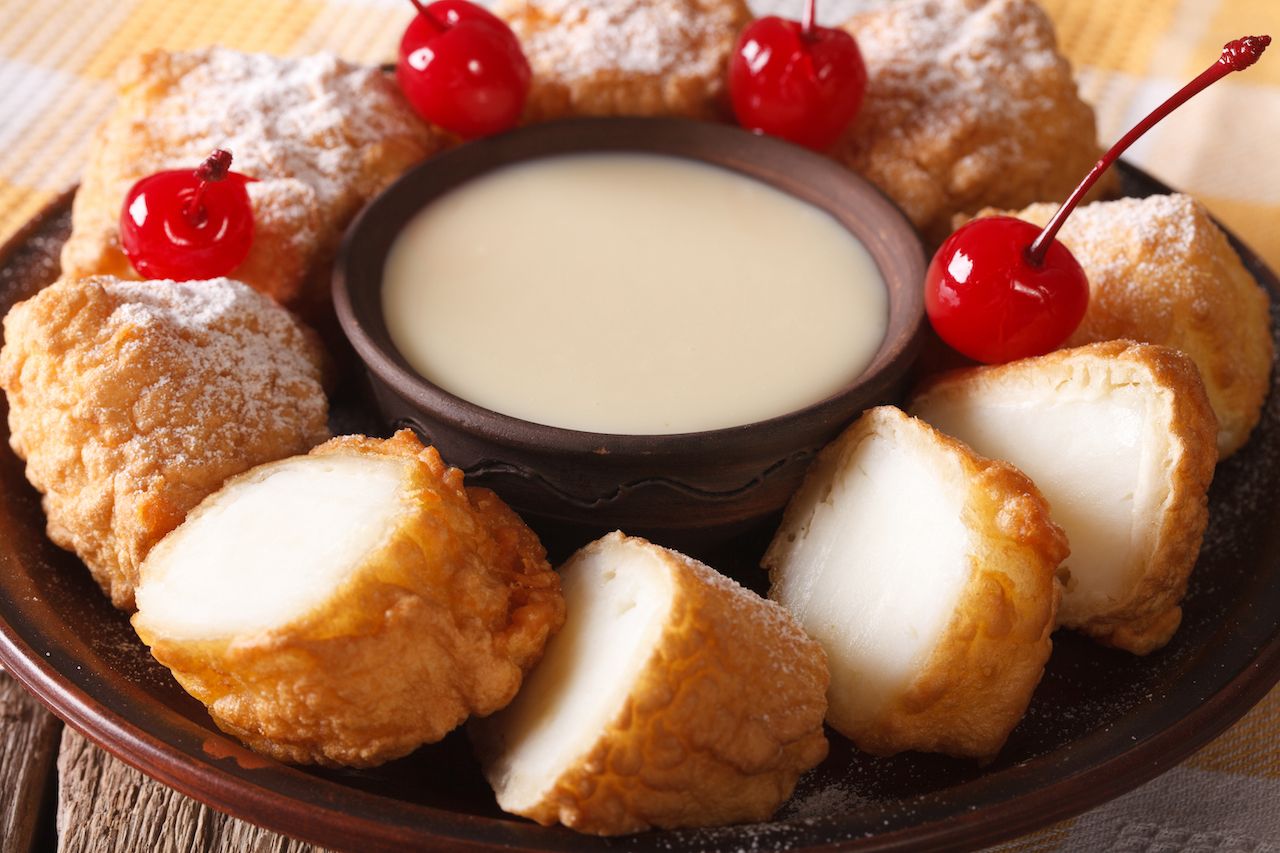 “Leche frita” isn’t found in many tourist restaurants, but it’s a classic (and centuries-old) Spanish dessert. It has a sweet, firm, cold and milky center (made by cooking milk, sugar and flower until it turns into a dough) and a crunchy, warm shell on the outside dusted with cinnamon. It’s especially tasty with a scoop of vanilla ice cream and a cup of black coffee. 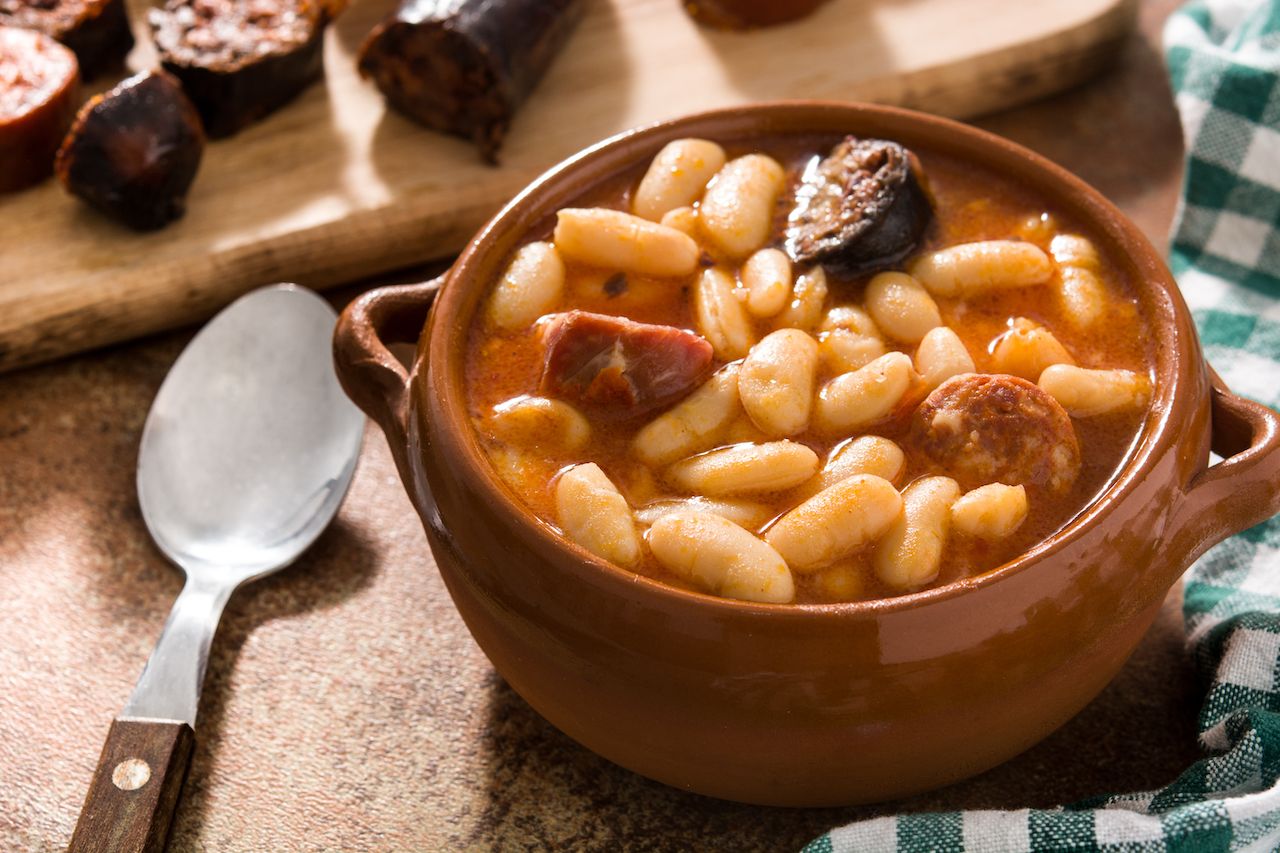 With Spain having around 20 bean varieties (some of which even have protected geographical status!), we see A LOT of bean stews on our table. The fabada, a dish originating from the northwest Asturia region, is the king of Spanish bean stews. Spanish white kidney beans (faba asturiana) are left to simmer with morcilla (Spanish black pudding), chorizo, pork shoulder and saffron. It’s often cooked and served in a traditional clay “cazuela” giving it an extra smoky flavor. Just like the lentejas, it’s eaten in the winter with a crusty bread baguette and Asturian cider or a bottle of red. 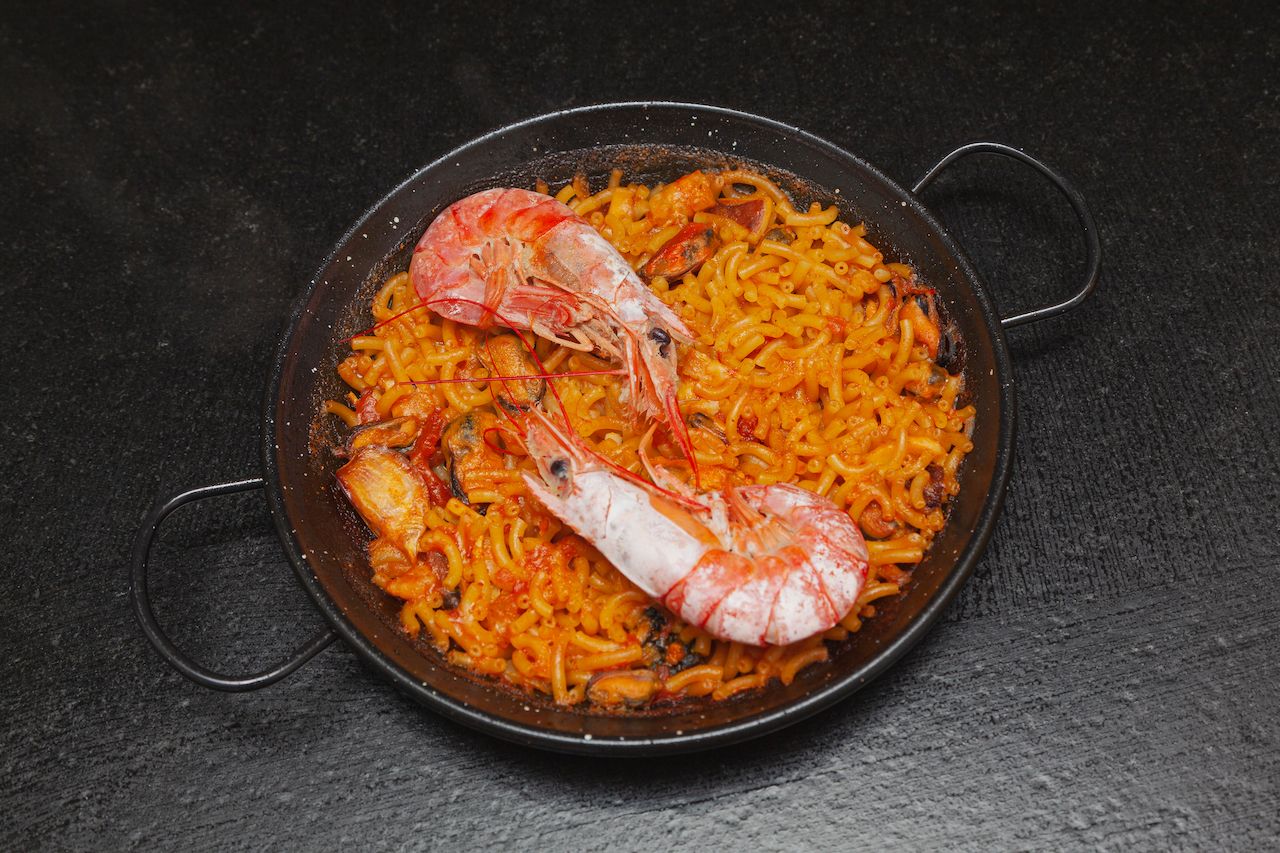 Fideuà smells, looks and (almost) tastes like a paella, but instead of paella rice, fideuà is made with vermicelli noodles (or fideos in Spanish). It’s also made only with fish, rather than meat. Originating from the Valencian coast, this is a huge hit for the Spanish. 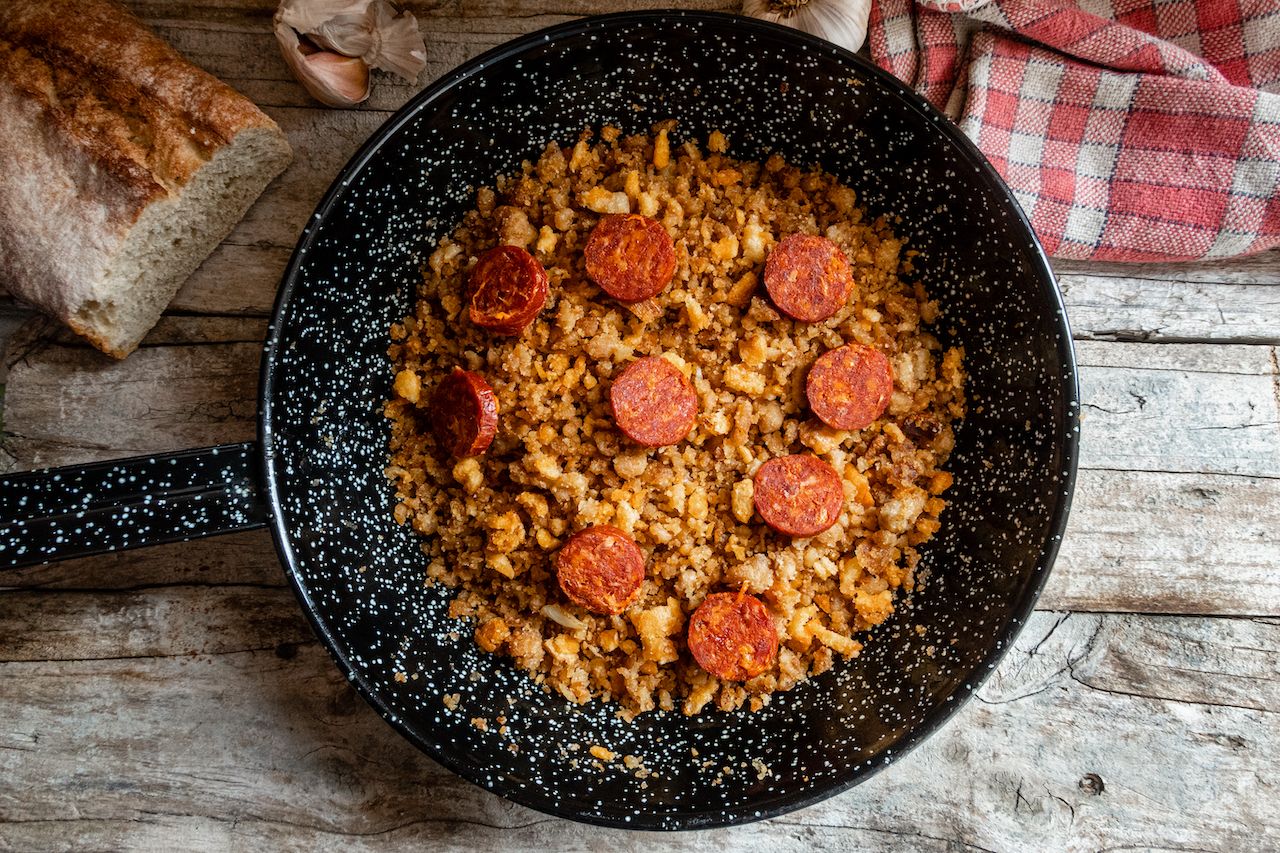 Only in Spain would we get excited about breadcrumbs. Migas, literally meaning “crumbs,” is a centuries-old Spanish recipe said to have started in the harsh plains where farmers had nothing more than stale bread, wild garlic and olive oil to eat. You cut the stale bread into small chunks and fry in a big wok (similar to the paella dish) over an open flame along with olive oil, garlic and salt. Cooks now add to the fried garlicky breadcrumbs anything from chorizo and bacon, to grapes and oranges, depending on the region. 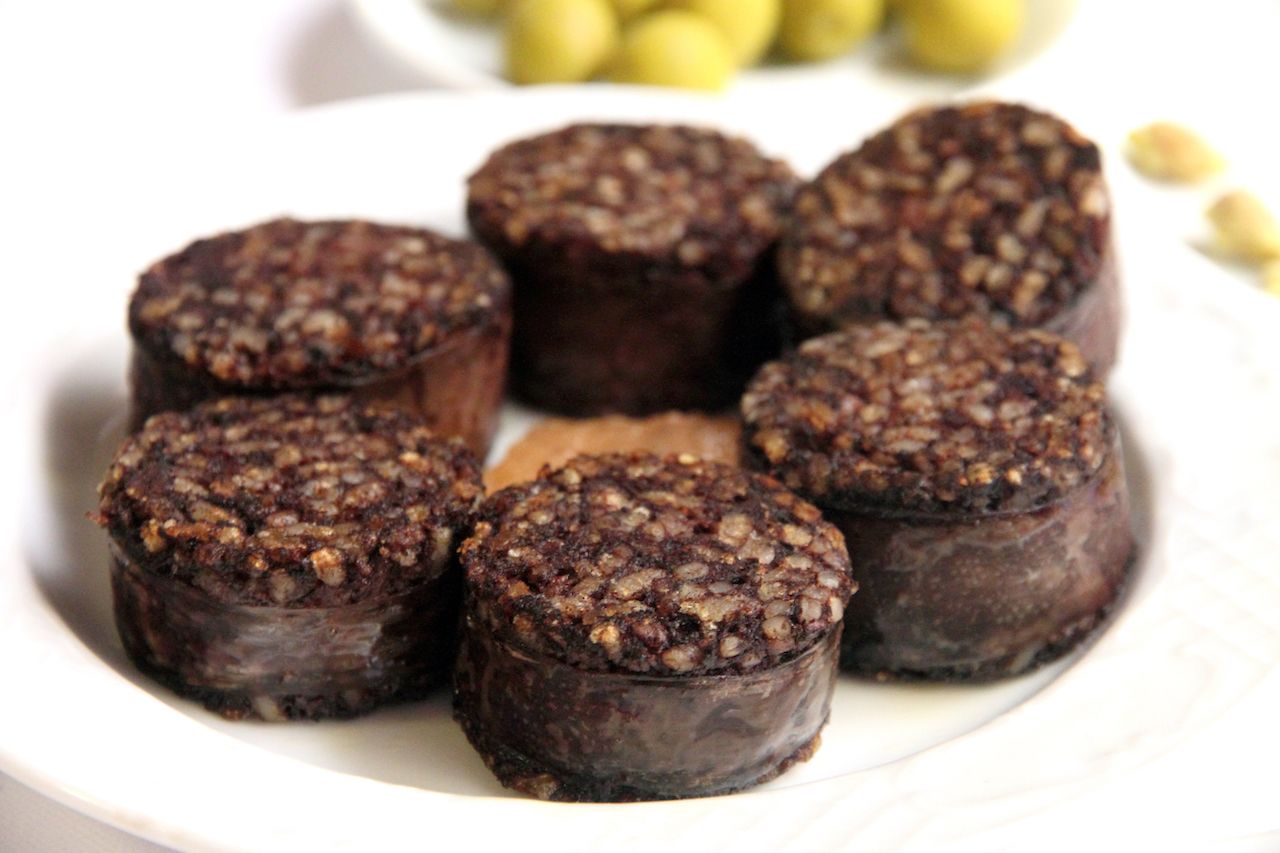 Morcilla is a blood sausage, but it tastes way better than it should (it also tastes better than black pudding by the way- so don’t let that put you off). The pork sausage is traditionally made with onions or rice and, if it’s a good one, pine nuts, almonds and paprika. Morcilla is so tasty that you can eat it simply fried in a little olive oil and served on crusty bread, but it’s also used to flavor stews as with the fabada. 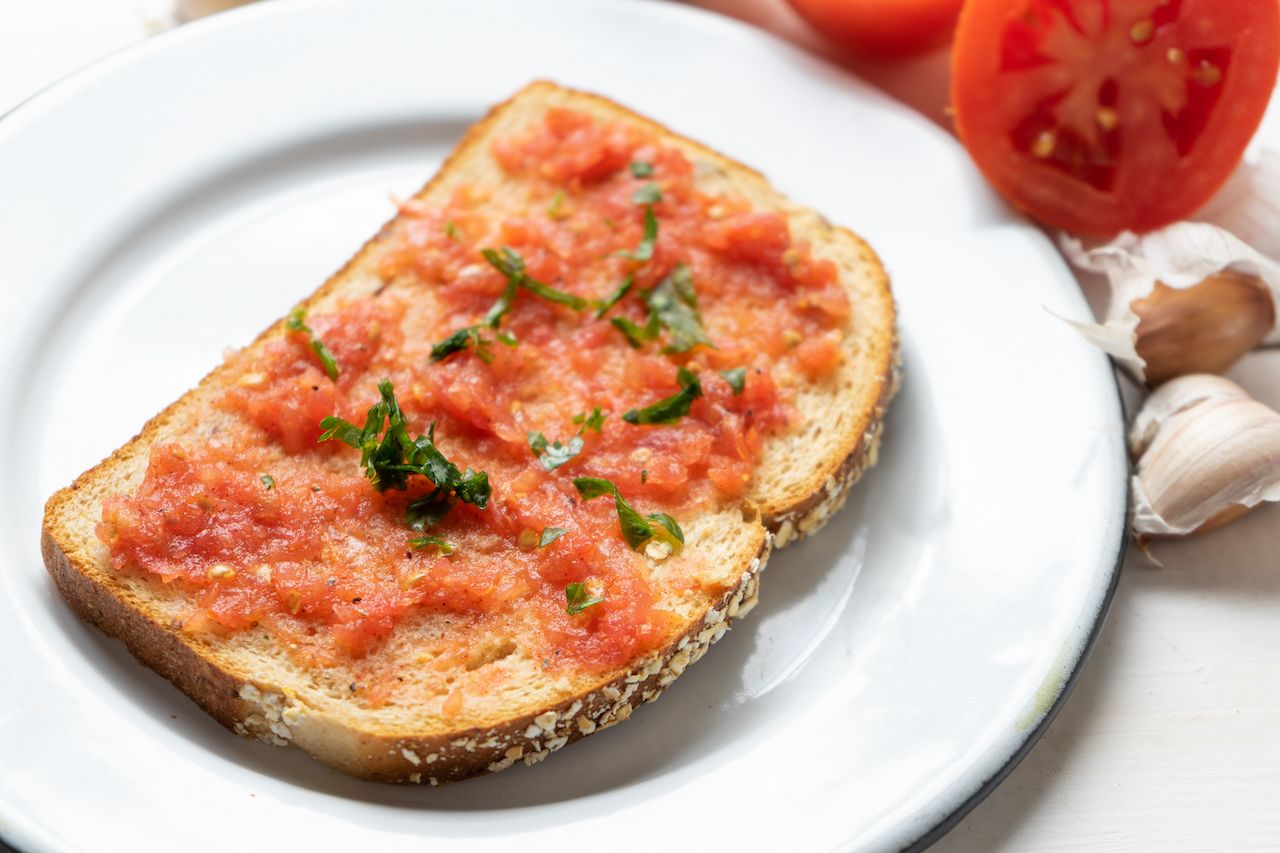 This is one of the most popular breakfast in a Spanish household. Tostadas con tomate are just that: toasted fresh crusty bread topped with Spain’s ripest and juiciest tomatoes, a pinch of salt, a drizzle of extra virgin olive oil and (if you’re like me and love garlic at any time of day) a little rub of garlic. Once you’ve tasted tostadas with a freshly squeezed orange juice or a strong cortado (small black coffee with warm milk), porridge and crunchy nut cornflakes just won’t cut it anymore. 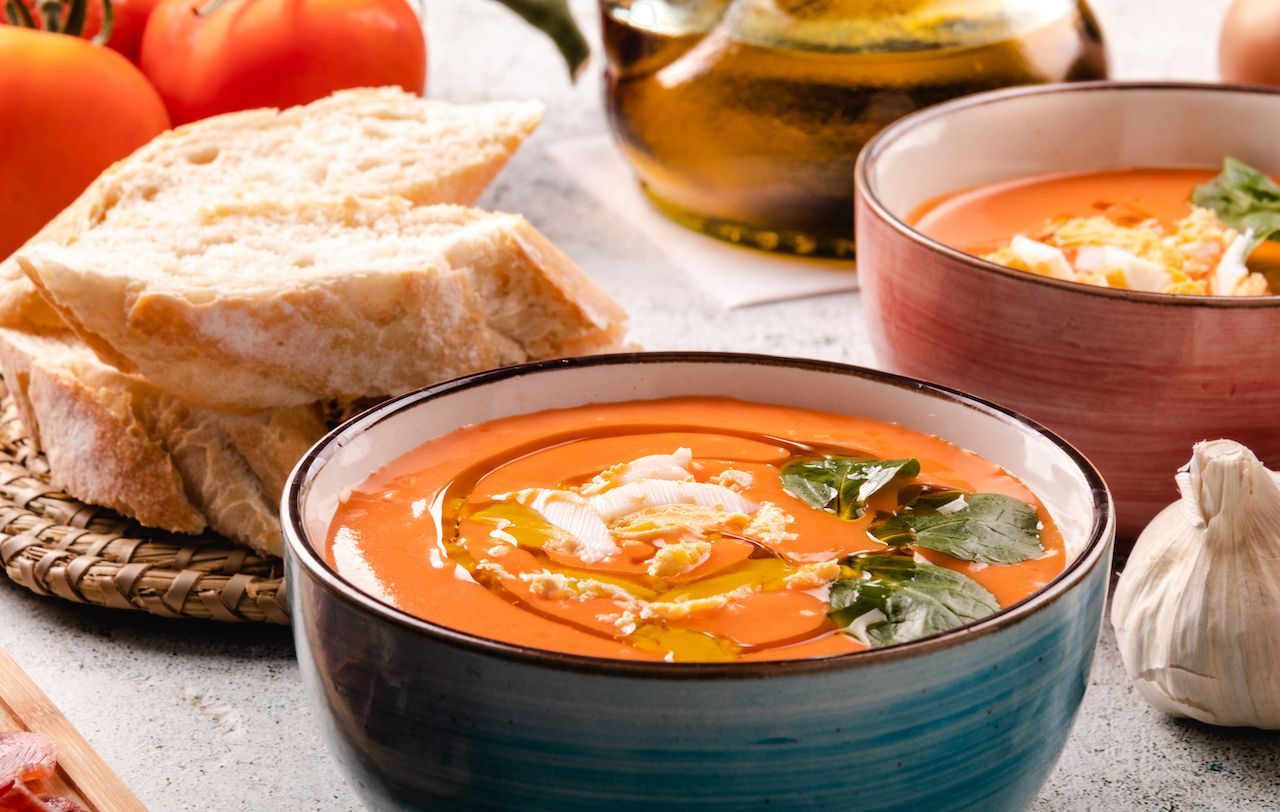 When it comes to Spain’s fresh tomato soups, gazpacho steals the show. However, I actually prefer Andalucía’s take on the dish. Salmorejo has the same base of tomatoes, onions, peppers, cucumbers and garlic, but they also add a handful of pureed breadcrumbs and vinegar to give the cold soup that extra bit of texture. The piece de resistance? Salmorejo is finished off with slices of hardboiled egg or the finest cuts of ham. It’s the perfect light lunch or starter in the hot summer months.

Salpicón in Spanish means “hodgepodge” or “medley”.  It’s basically anything that mixes a load of ingredients together — such as meat, fish or vegetables — with a sauce. My favorite is the salpicón de marisco (seafood salpicón). I first discovered this in a small seaside town in Mallorca, where you’ll see it in almost every fish or tapas restaurant on the island. A decent salpicón usually contains a mixture of prawns, crab, mussels, monkfish, octopus and squid, as well as some finely chopped pepper, onion, pickles and olives, finished off with olive oil and vinegar and served cold. 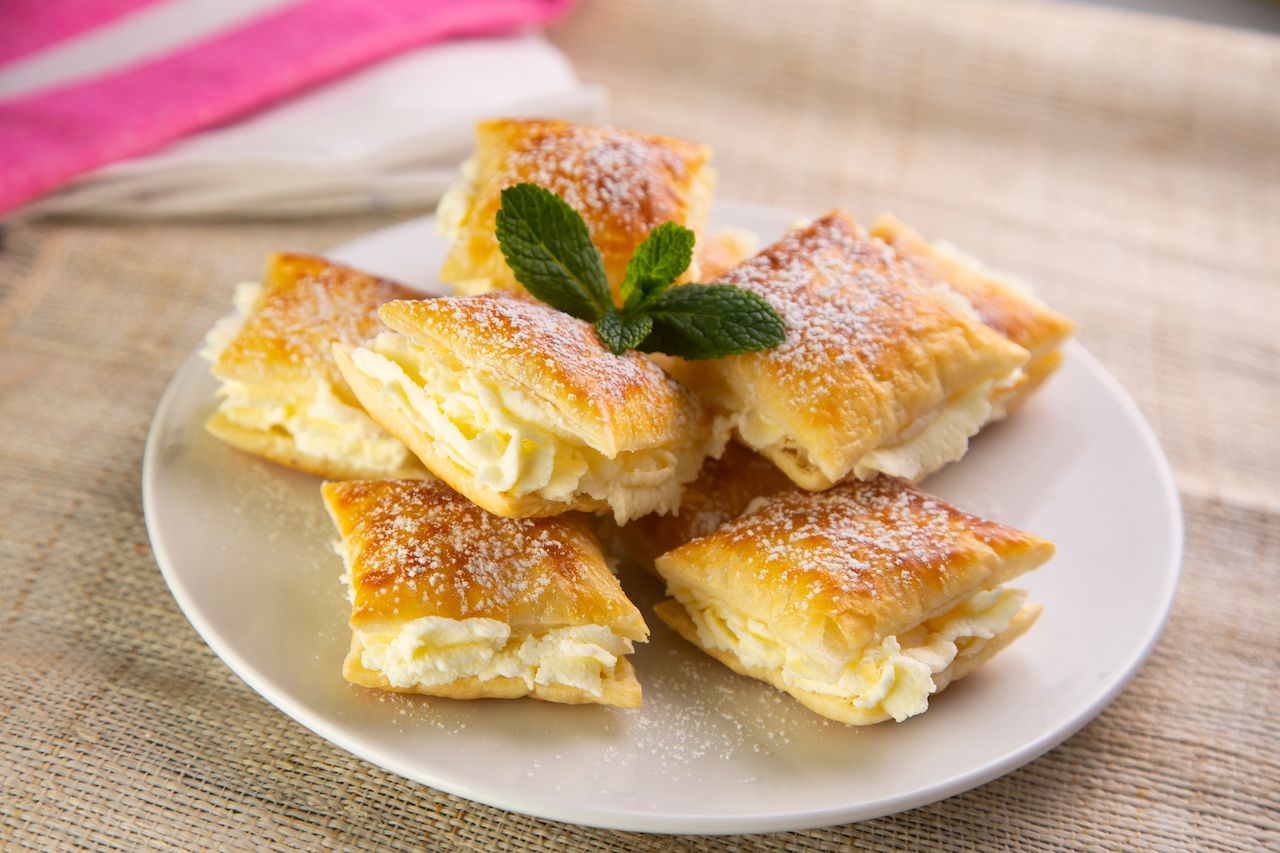 Miguelitos are small, airy and moist phyllo pastry squares filled with a generous portion of (in my case) oozing dark chocolate ganache in the center finished off with a sugar dusting. Other variations include custard, cream or fruity fillings. They started in the town of La Roda back in the 60’s, but you can now find them (and smell them) in almost every village bakery. 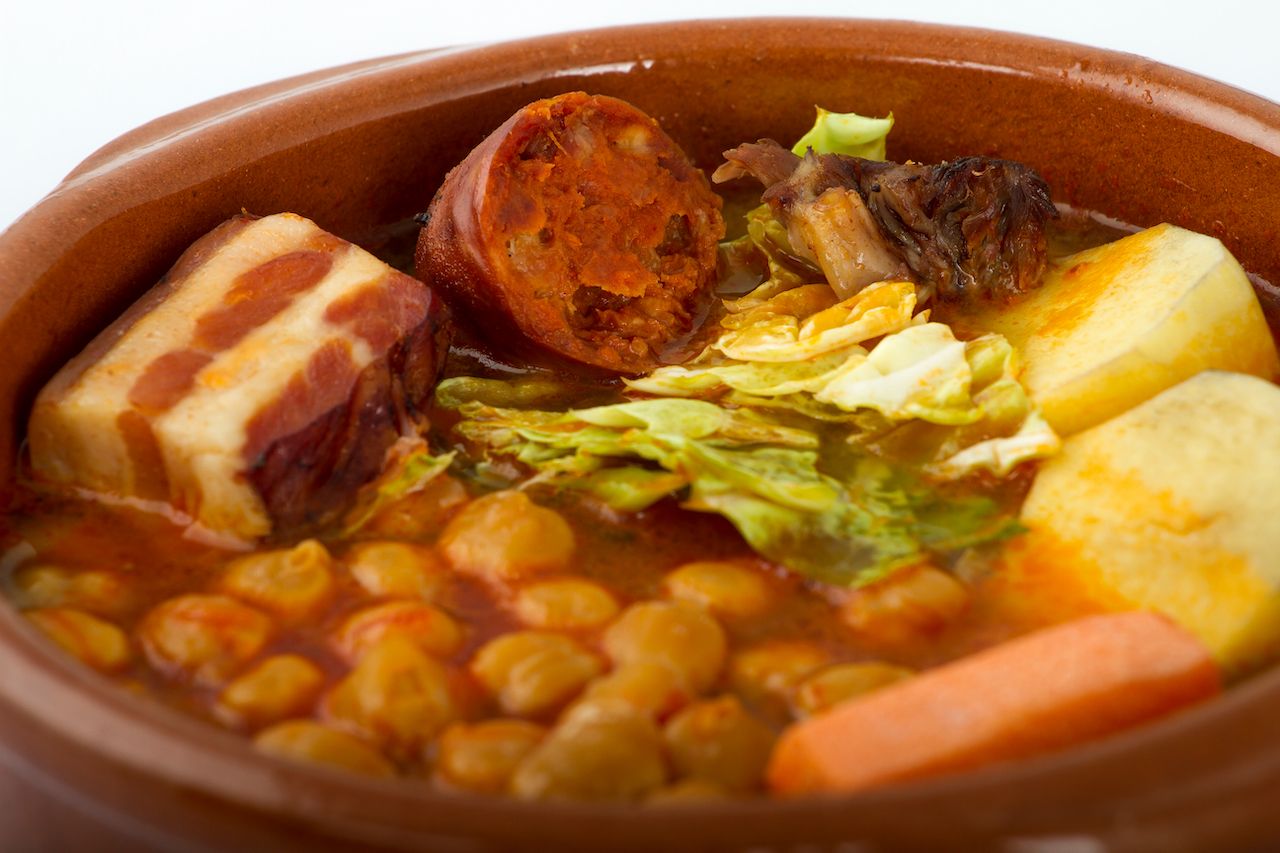 As the name suggests, this delicious stew is from Spain’s capital, Madrid. It’s similar to the Asturian fabada, but instead of using the faba bean, the cocido madrileño is made up of chickpeas, potatoes and root vegetables. This is another warm, filling and meaty meal to be enjoyed as a 3-hour lunch at your abuela’s house. 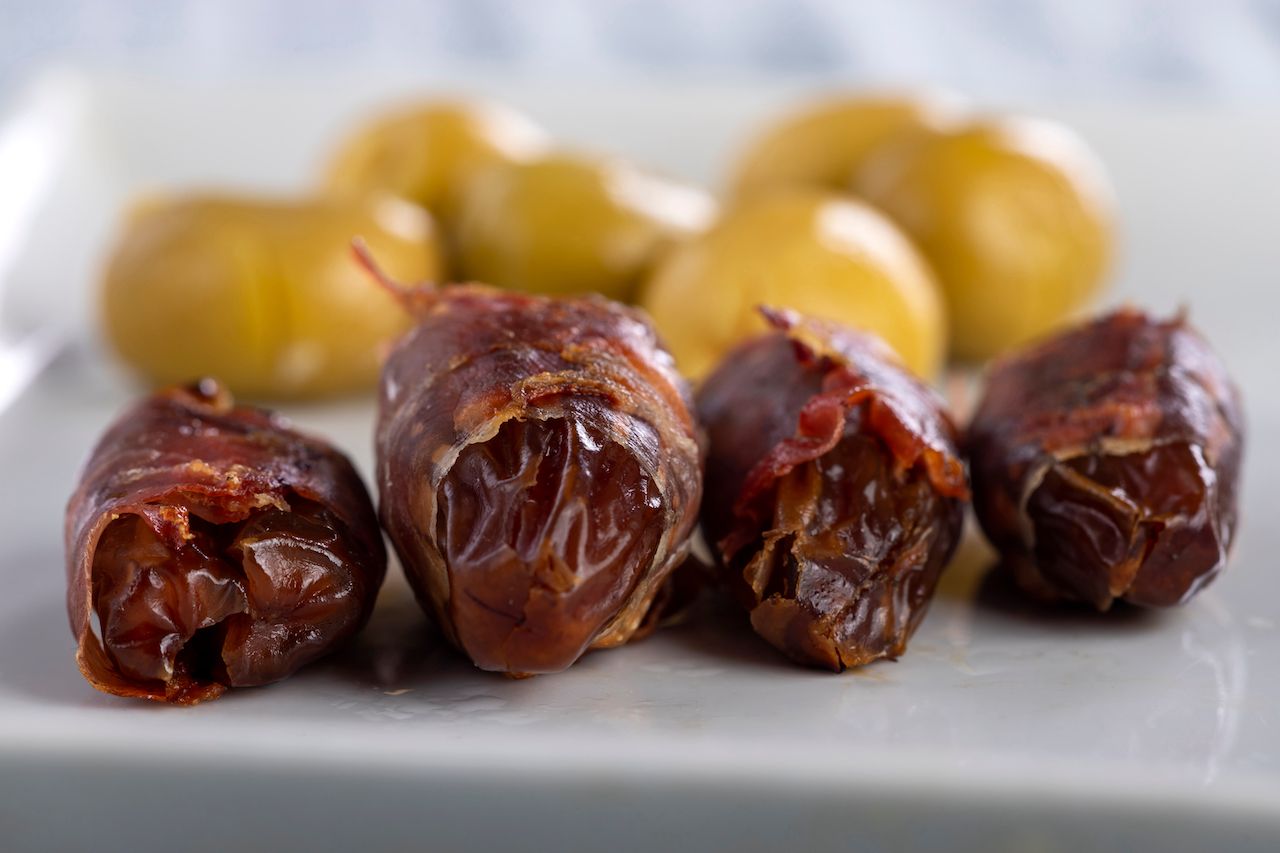 If I was only ever allowed to eat one more tapa for the rest of my life, it would be this one. Dátiles con bacon are large, extra sweet Spanish dates wrapped in crispy bacon. There are also other delicious combinations where the date is stuffed with creamy goats’ cheese and the pip replaced with an almond. The blend of sweet and salty in one bite is amazing. 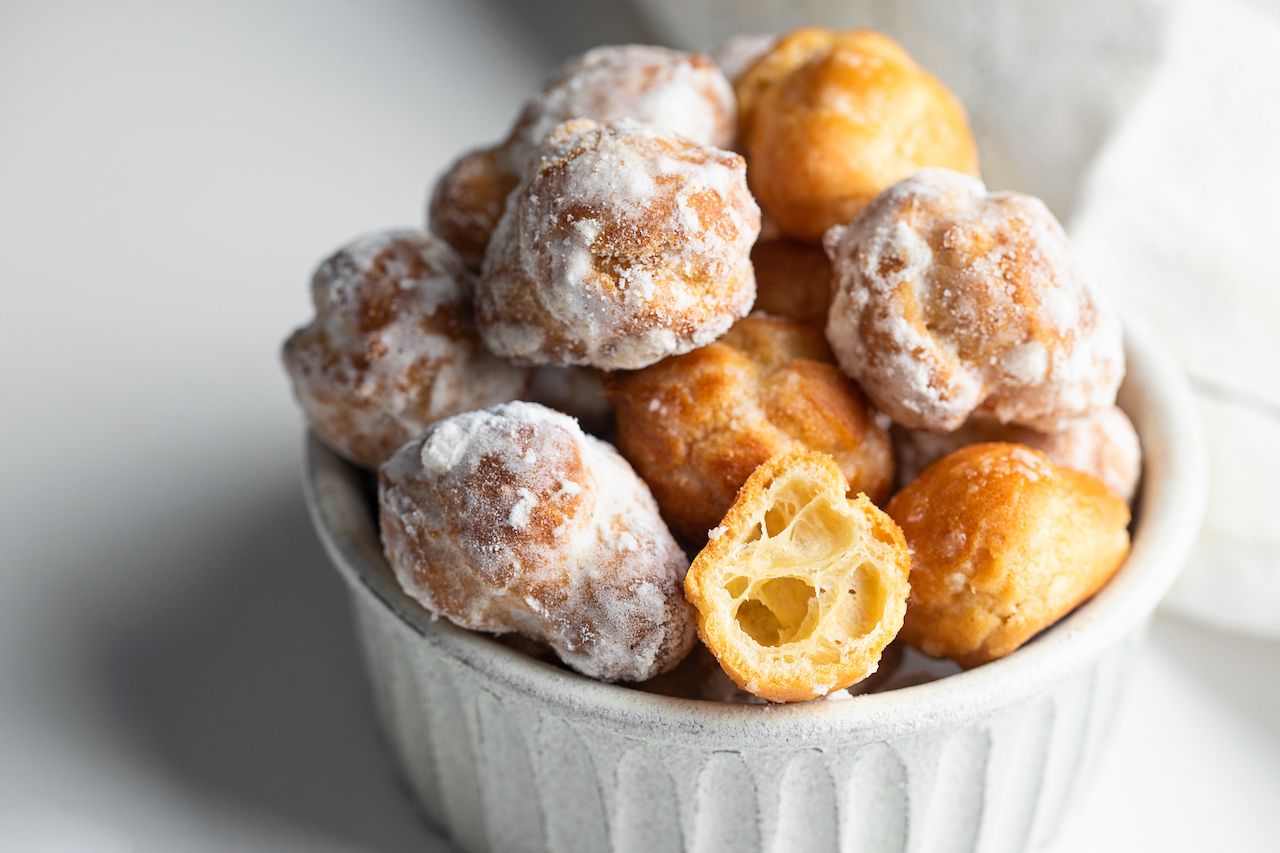 Every November 1st, on Día de Todos los Santos (All Saint’s Day), bakery windows across the country are filled with these little sugary, doughy, fritter-like balls. They’re made by mixing flour, butter and eggs, shaping the mixture into little balls and frying in hot olive oil. They’re normally filled with custard, cream or chocolate and dusted with sugar. A centuries-old celebratory treat. 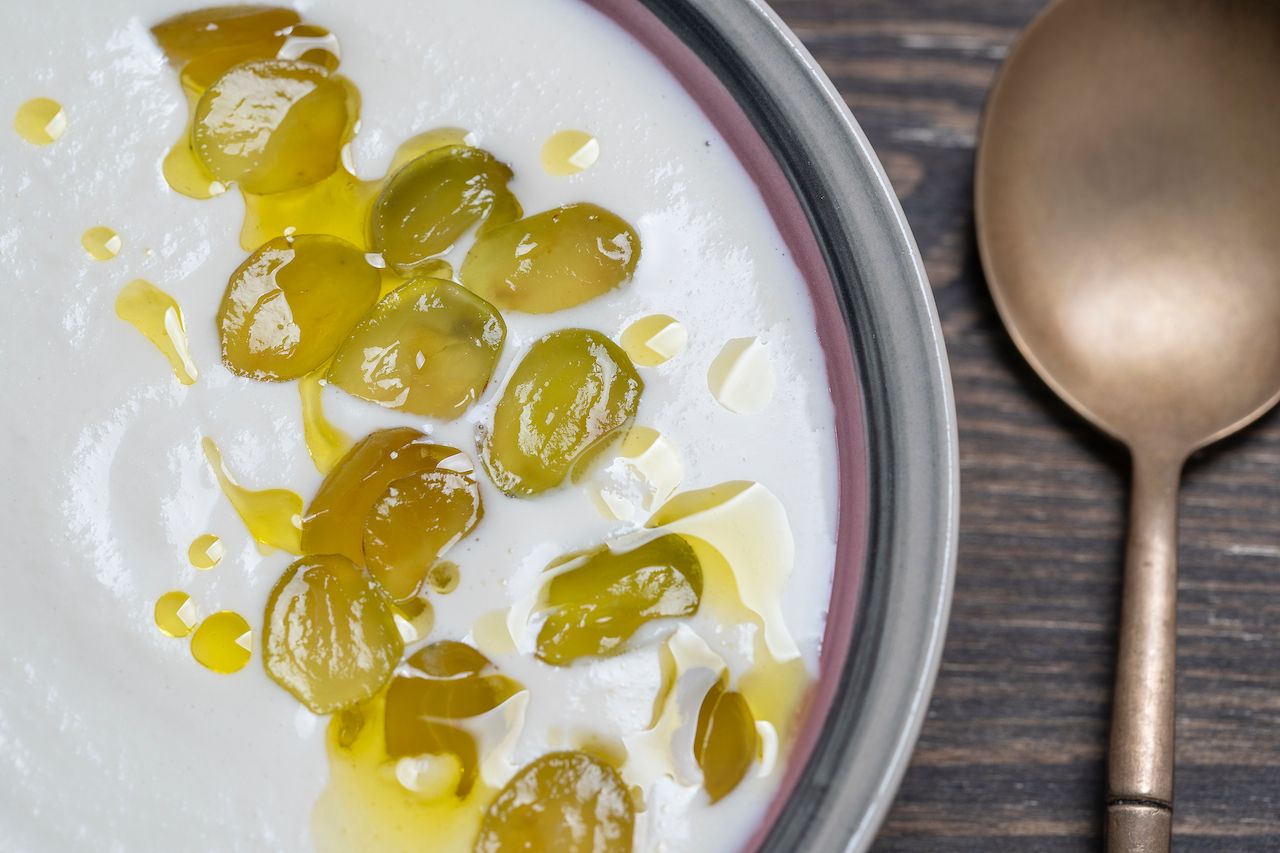 When it comes to Spanish soups, ajoblanco rarely takes center stage- but it should do. Like salmorejo and migas, ajoblanco is another dish deeply rooted in Southern Spain’s farmer history, where resources were low, the heat was unbearable and life was tough. Its blend of bread, garlic, almonds, sherry vinegar, olive oil and salt is served cold and topped with grapes or melon. It’s delicious as a refreshing starter or light lunch on a hot day by the sea. 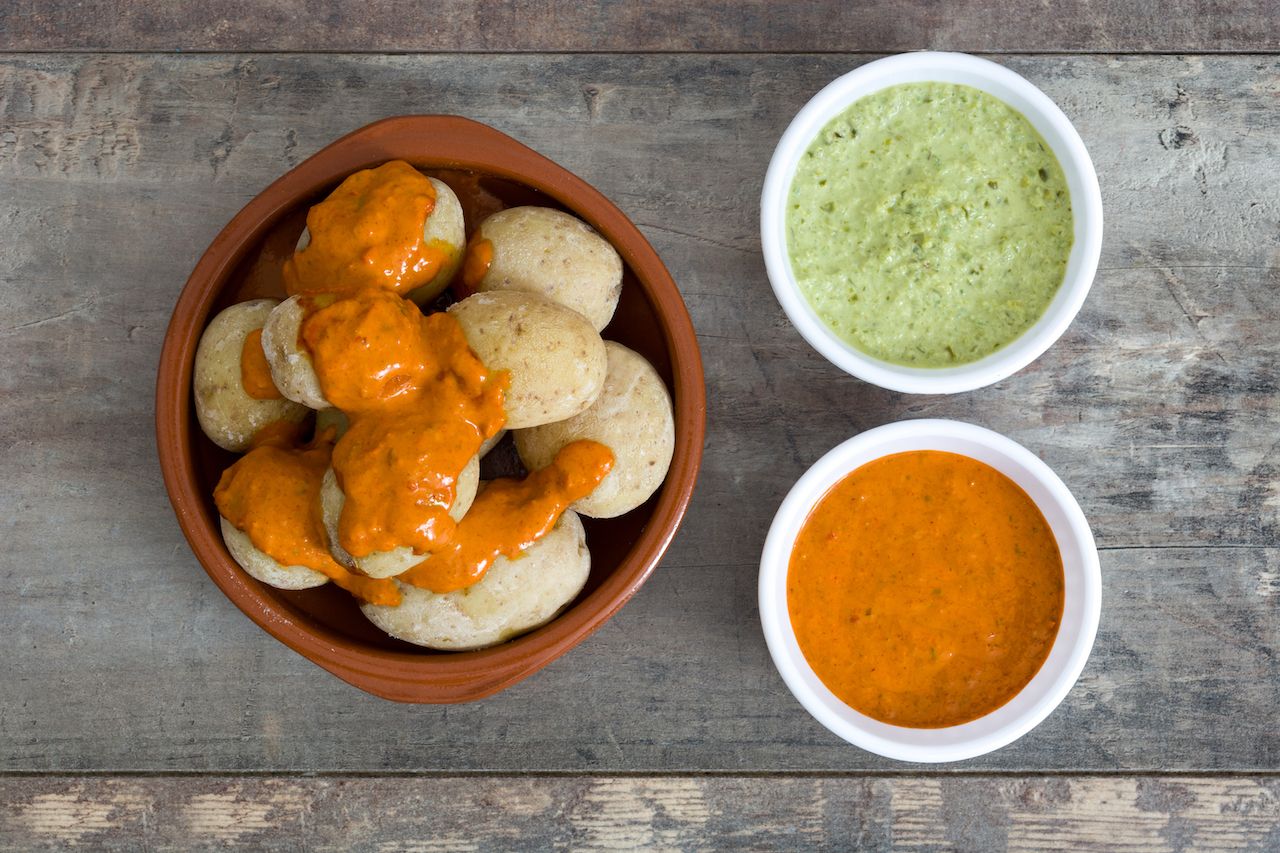 Hands down the best potatoes you’ll ever taste. Papas arrugadas, or “wrinkly potatoes”, get their name from the wrinkly skin that forms around them after being cooked (traditionally) in salt water. They are served with a spicy red and green cilantro sauce. You’ll have to make a trip to the Canary Islands for this one: this is the only place where they grow the Ancient Canarian Potatoes and where the mojo sauce is simply unbeatable. 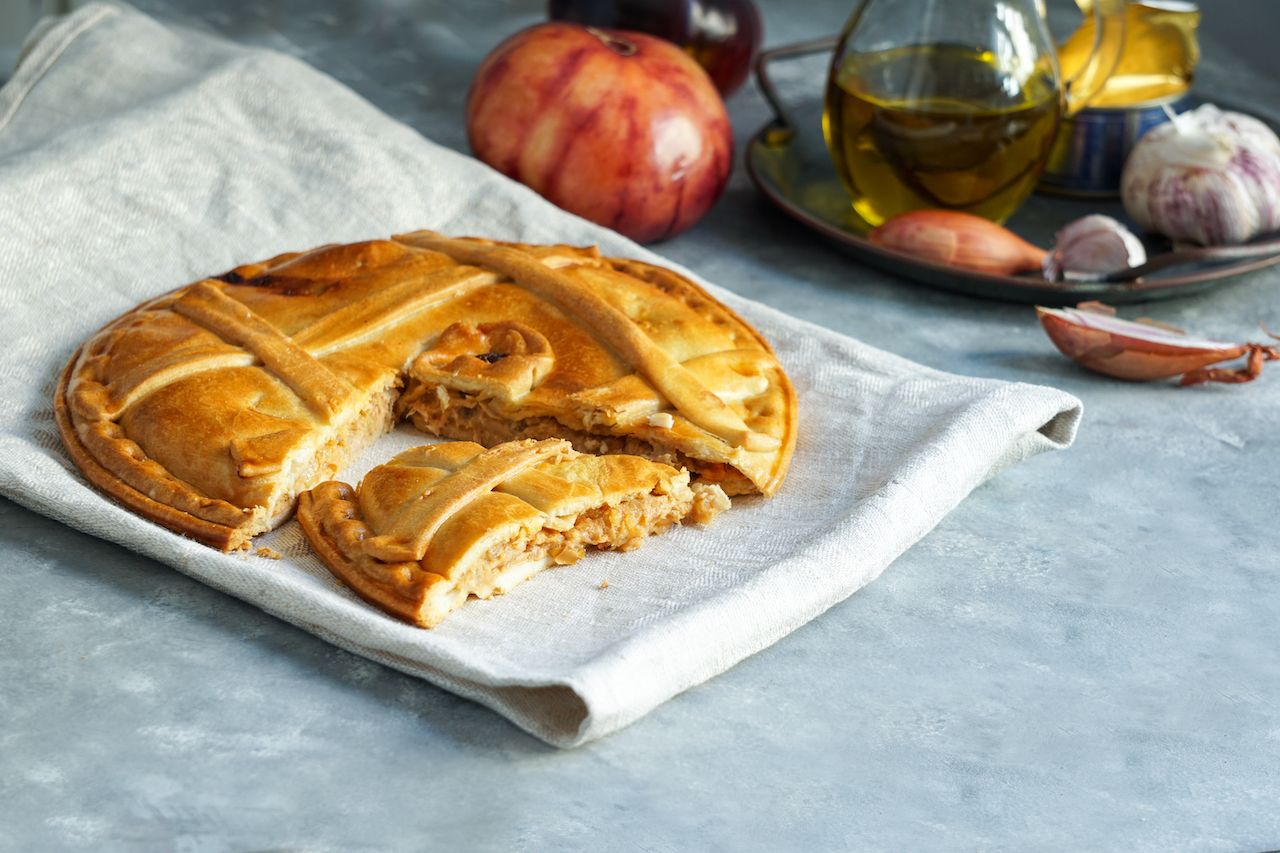 Empanada comes from the Spanish verb to empanar; to wrap or coat in bread. These baked stuffed breads were the best after-school snack – but you had to make sure you were the first at the bakery to bag yourself the empanada de atún. The empanada comes with different fillings, from meat and vegetables, to cheese and fish. However, my favorite is the empanada de atún: a delicious filling of tuna, onions, garlic, peppers, tomato and egg. 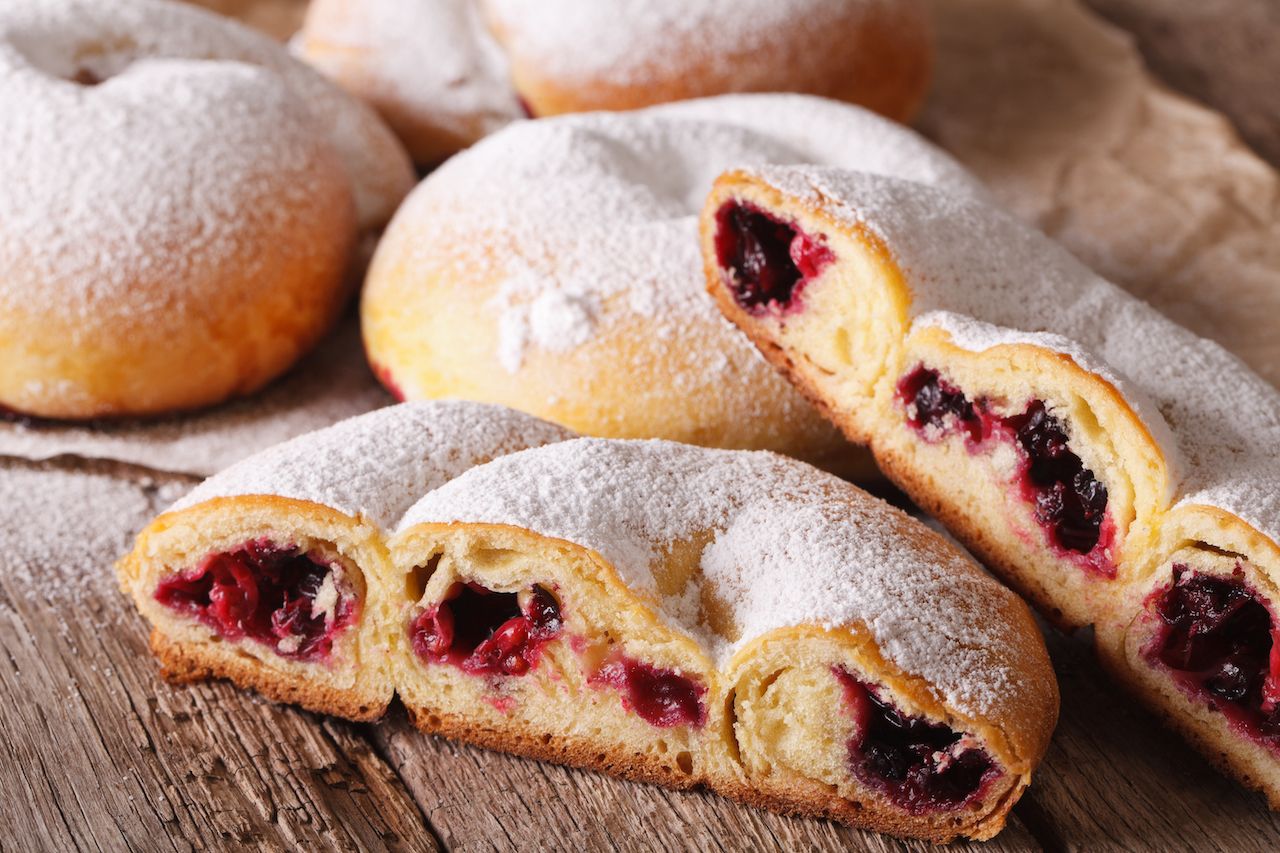 The sweet ensaimada has been used in celebrations in the Balearic regions since the 17th century. It’s a really simple light sweet bread dusted with caster sugar. I still eat mine with a cup of thick, dark chocolate, but the grown-ups tend to go with a cortado (coffee with milk) instead. 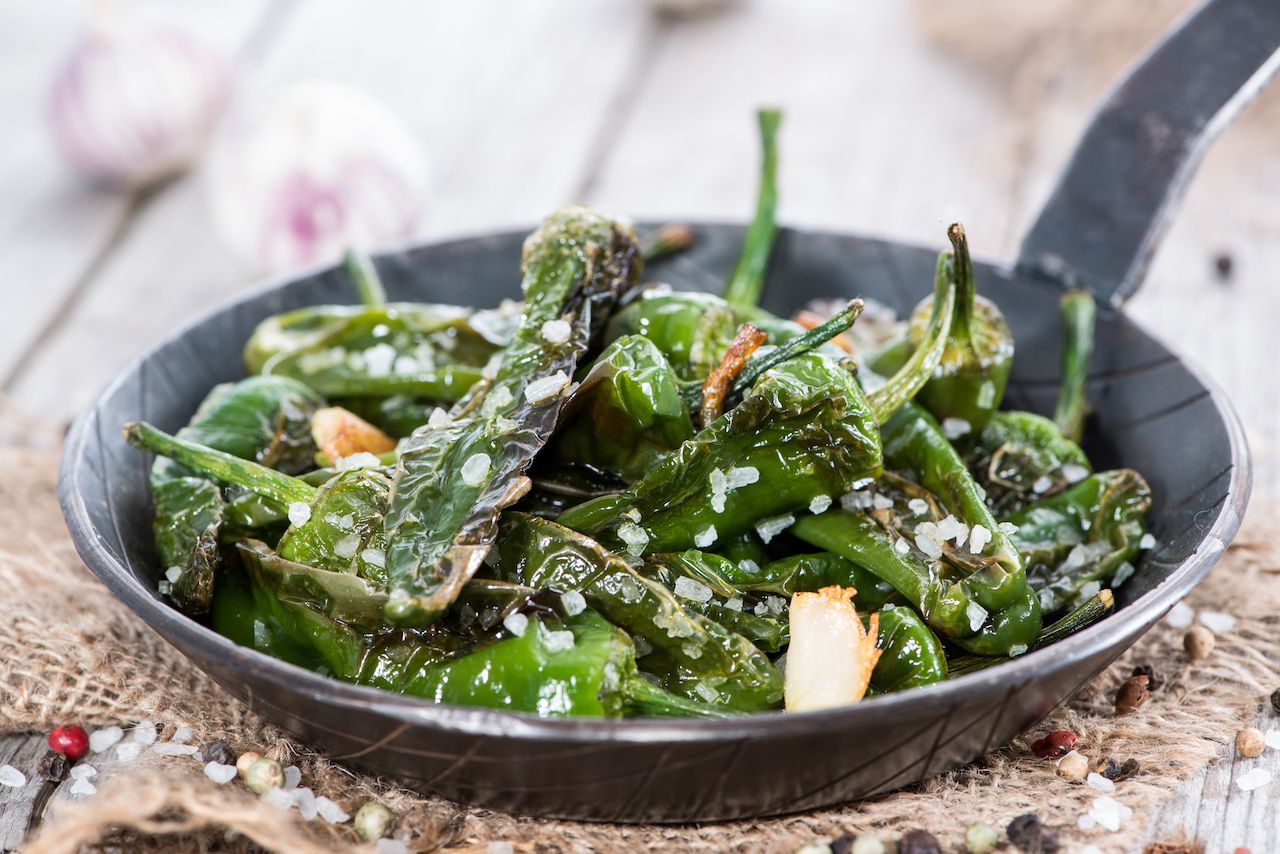 Introducing the best plate of green peppers you’ve ever tasted. The Padrón pimiento is no ordinary pepper: they only grow in Padrón, Galicia, and they’re kept at a tiny 5cm in length to keep a mild, sweet taste. At home, they’re fried in oil and covered in rock sea salt. Simple, but highly addictive. 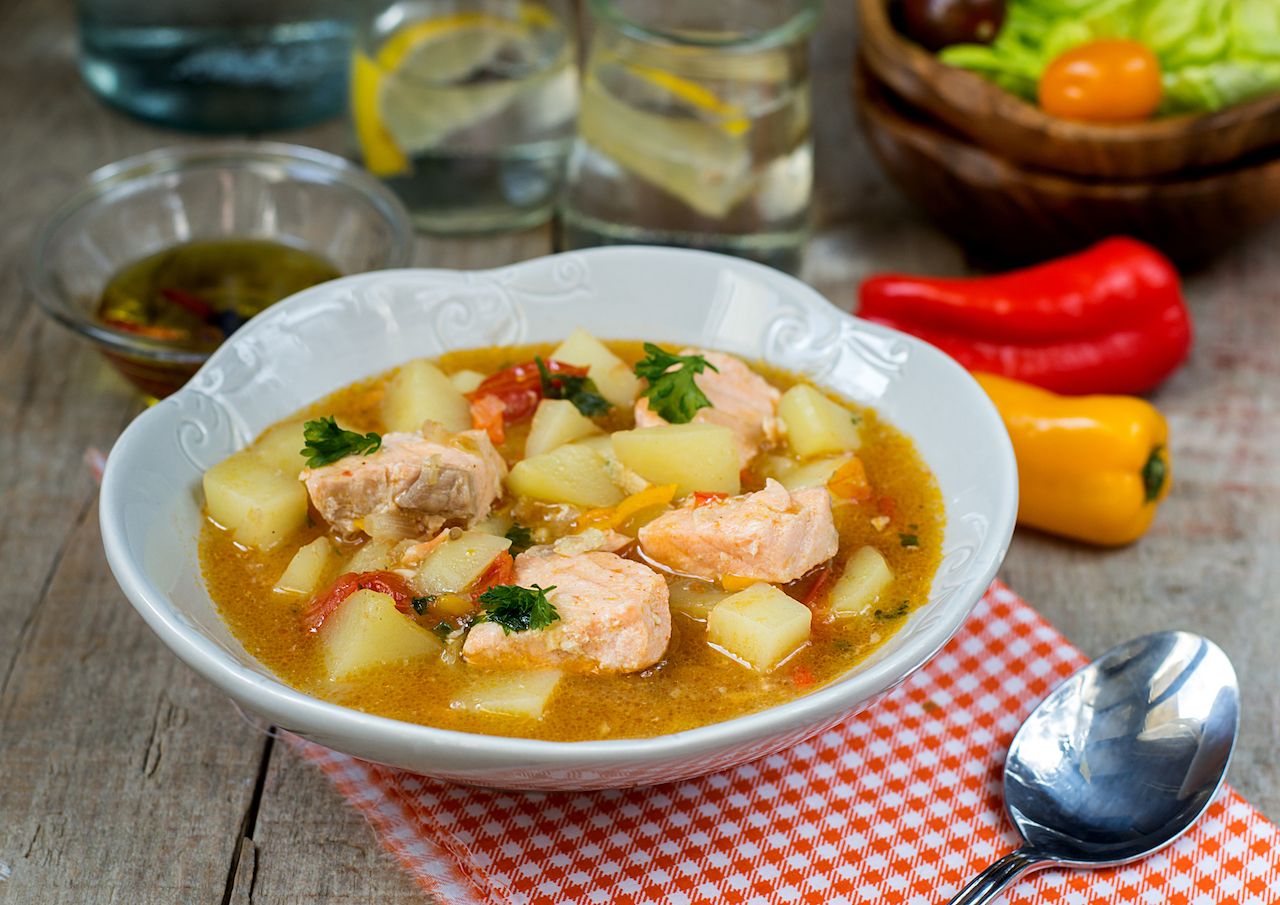 We have the Basque fishermen to thank for this understated masterpiece. In the Basque language, ‘marmitako’ means ‘what’s inside the pot’. And what did fishermen have in their pots? Tons of tuna and potatoes- and so marmitako was born. This is more of a potato stew than a fish stew, as it’s the potatoes that are slow-cooked with onions, tomatoes, peppers, white wine, herbs and spices. The cubes of fresh tuna are only added at the last minute. 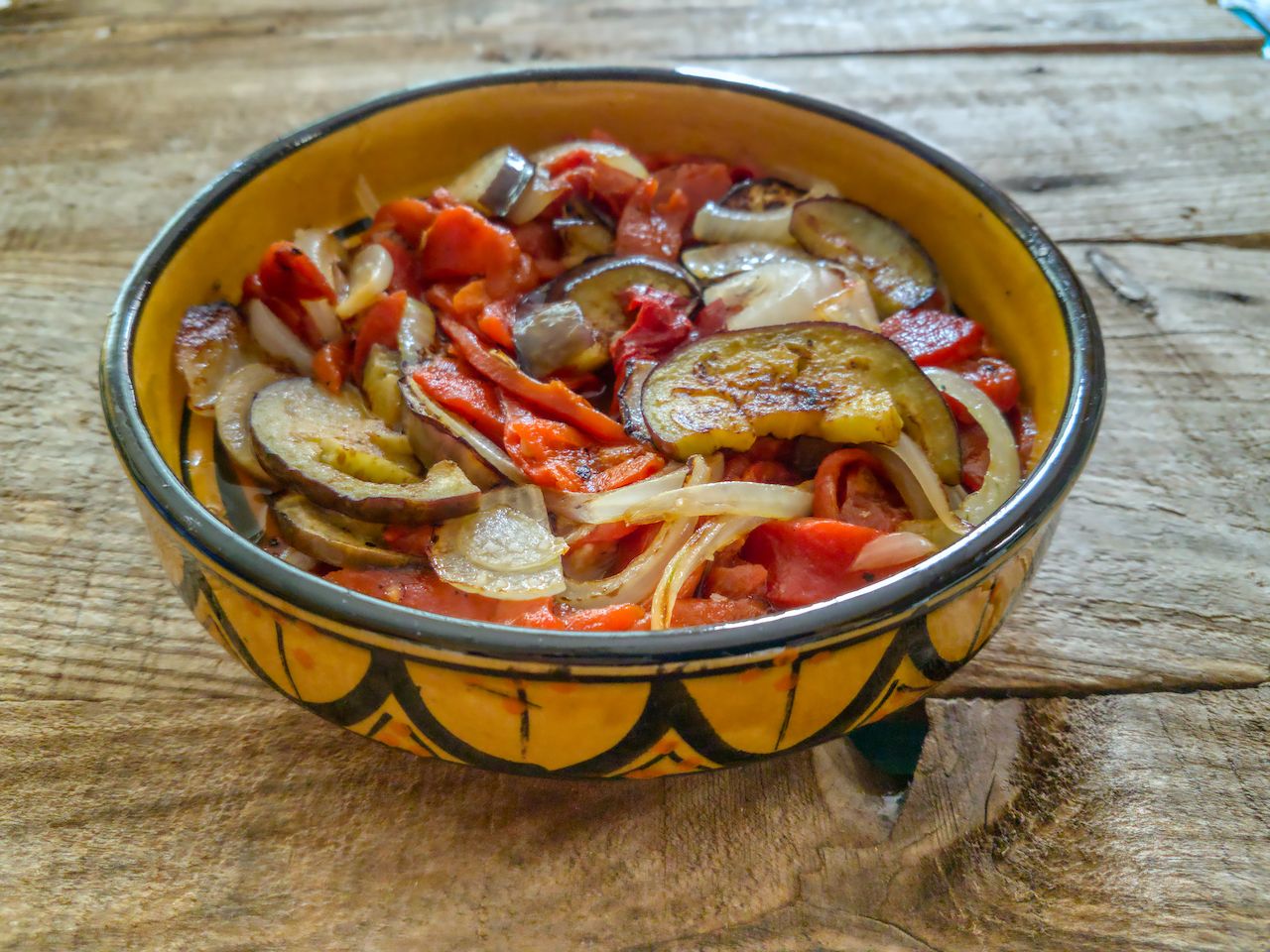 Everything about this dish is a taste of home: the smells, the colors, the flavors, in a plate of chargrilled sardines, anchovies, peppers, onions and garlic finished with a drizzle of olive oil and a sprinkle of sea salt. The escalivada is a traditional recipe from Valencia. In Catalan, escalivar literally means to “cook in ashes”. The smokiness from the traditional open-fire method is what gives this super easy dish its knock-out flavor. Serve with warm crusty bread. 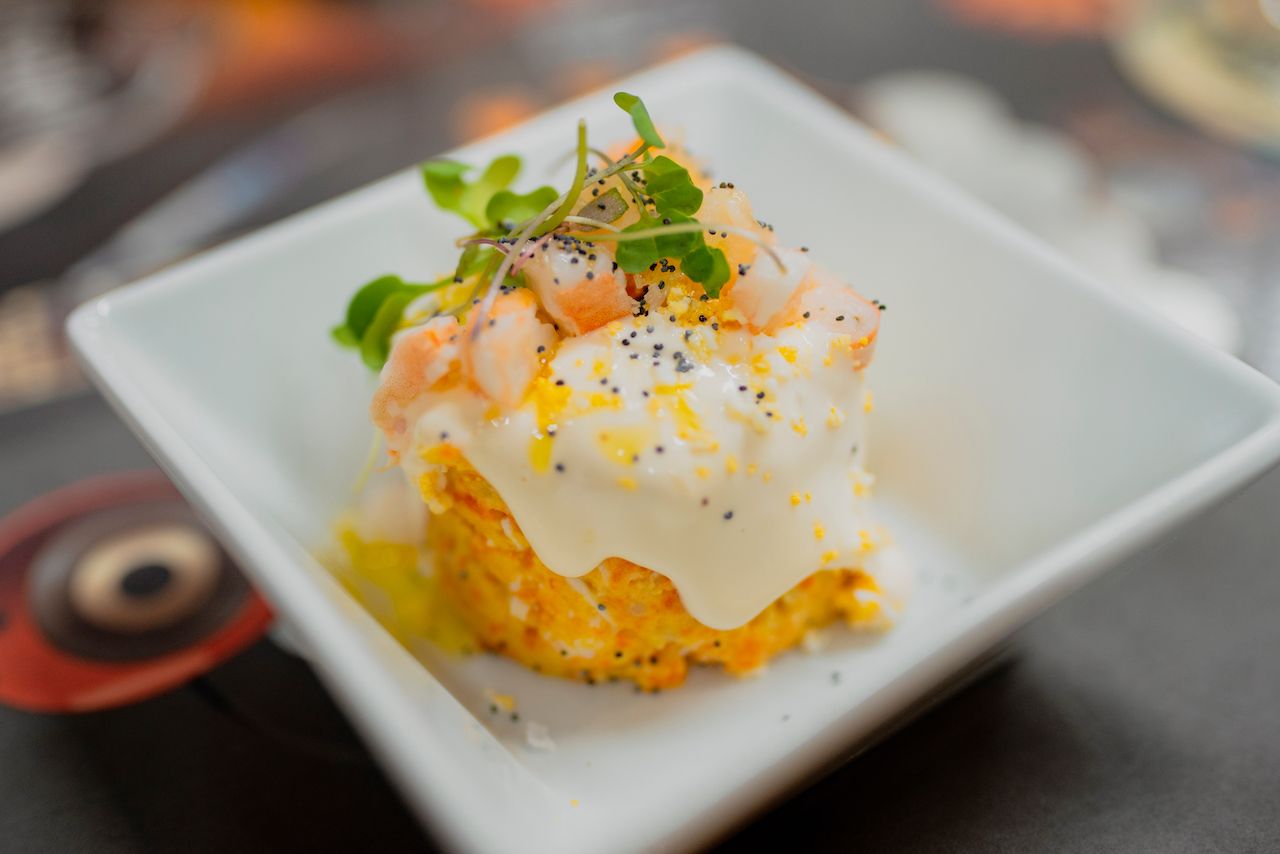 Another super simple, comforting dish (although I can never seem to get the same flavor as the chefs do in Cádiz). This is the Spanish or, more specifically, the Andalucian take on potato salad: a blend of fluffy mashed potato, onions, pimentón (Spanish smoked paprika), fresh parsley, sherry vinegar, olive oil, and salt. It’s delicious eaten alongside some oily tuna, olives, and slices of egg. 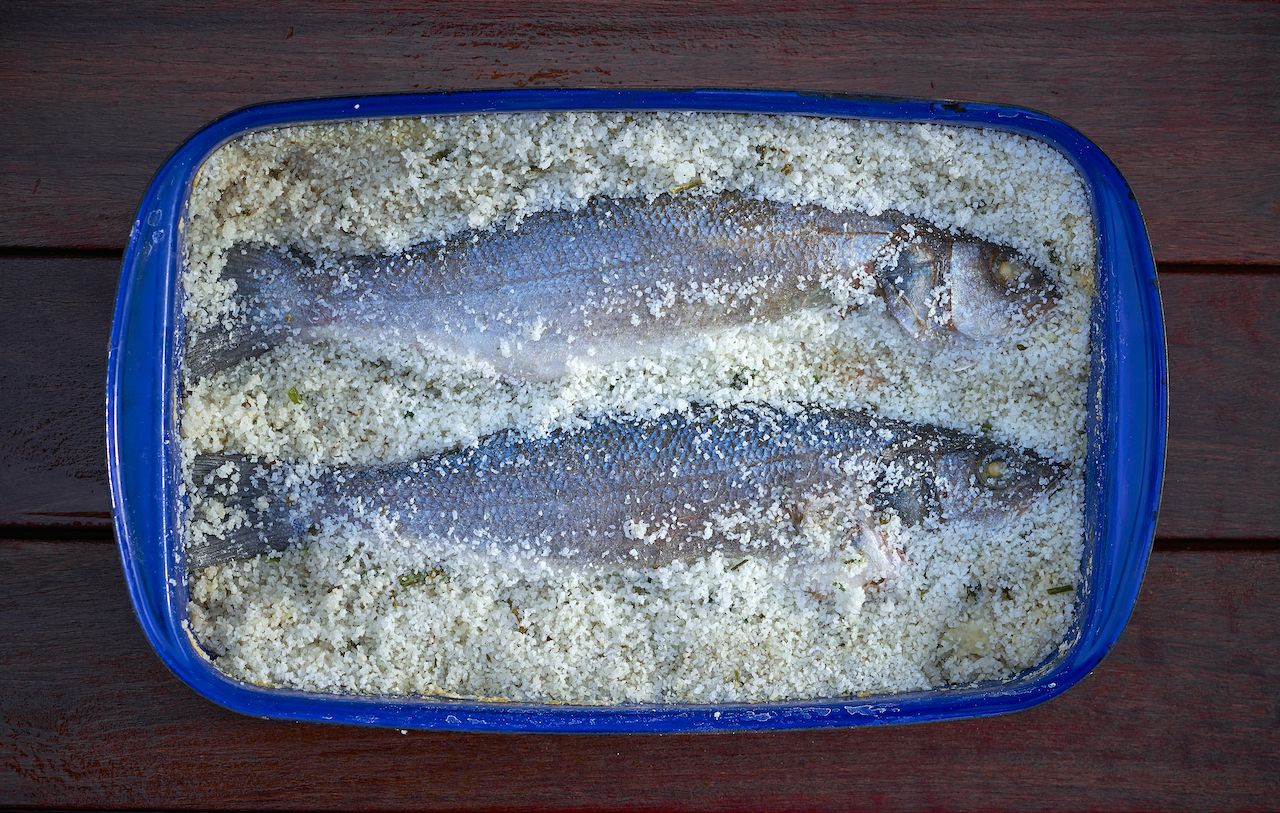 Going out for a huge salt-baked seabass was always a treat for when we had visitors over. It’s still one of the tastiest melt-in-the mouth fish I have ever tasted. Fishermen in Southern Spain have been cooking seabass in a hard salt shell for centuries. Why? It makes the fish extra juicy, achieves the perfect level of seasoning, gives the fish an amazing aroma and is super healthy.

Tagged
Food + Drink Spain
What did you think of this story?
Meh
Good
Awesome