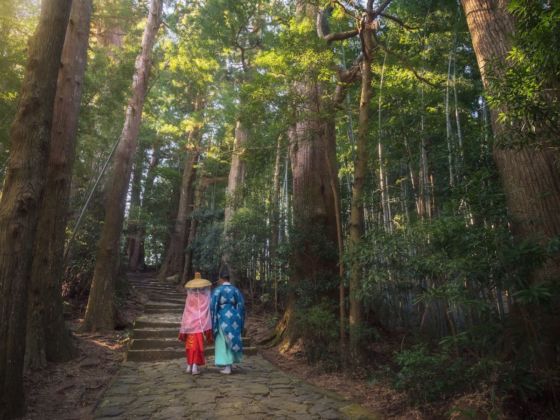 A 4-part itinerary for one incredible trek through Japan

First-time travelers to Japan are usually drawn to the neon-lit modern metropolises of Tokyo and Osaka, diving stomach-first into the ramen shops and sushi bars that fill the bustling streets. But outside the big city lines, things change. The urban glow fades, revealing scenes of bamboo forests, hot springs, waterfalls, and natural wonders easy to explore on foot.

Epitomizing a deep cultural reverence for nature, Japan holds one of only two UNESCO-designated pilgrimage routes in the world. For centuries, the country’s temple-lined paths have been considered sacred ground. Now these age-old hiking trails offer modern-day pilgrims a window into ancient traditions that still permeate Japanese culture today.

There are numerous trekking routes to choose from in Japan, but the itinerary below offers a solid mix of natural beauty, palpable history, and fascinating culture. After a long day of forest bathing, be sure to take part in a more relaxing pilgrimage ritual: soaking in the day’s adventures with a soothing dip in an onsen, or hot spring. You’ll be following in the footsteps of emperors and samurai. Here’s how.

This guide is proudly produced in partnership with the Japan National Tourism Organization.

On the Nakahechi (Imperial) Route Mountains in the Kumano region Shrines in the forest
For a thousand years, travelers have been making pilgrimages on the Kumano Kodo, a sacred, UNESCO-designated, seven-route trail network connecting shrines, temples, and mountains. The Nakahechi Route, or “Imperial Route,” is the one emperors and nobles once used and is the best-marked — and most popular — today.

Highlights: The Kumano Kodo trails spider out over the mountainous Kii Peninsula, where you’ll pass abandoned teahouses, Buddhist statues, red torii gates, temples, and hundreds of shrines. This is forest bathing at its best.

Details: The Nakahechi Route starts at the shrine of Takijiri-oji and, if you hike the whole thing, runs for 44 miles (budget five days). Parts of the route include steep, rocky terrain, so it’s best suited for active walkers and hikers. You can use local buses to shorten segments, and luggage shuttle services allow you to trek bag-free. The section we’re profiling here and in the map below ends at Kumano Hongu Taisha, one of the three grand shrines of the Kumano Kodo.

Local culture: Stay in the ryokan — traditional guesthouses — that line the Kumano Kodo. Ryokan typically feature tatami-matted rooms, communal onsen (hot spring baths), and yukata robes guests can wear around the inn. Be sure to book ahead if you’re traveling independently, as ryokan along the Kumano Kodo fill up fast.

Relaxation: Japan has natural hot springs all over, and some of the most beautiful bubble up in the Kumano Region. End your day soaking in an onsen, and you’ll be soothing your weary muscles in the same waters as the emperors who once followed this pilgrimage route. Yunomine Onsen is a must-stop for a dip, as it’s thought to be one of the oldest hot springs in Japan — discovered about 1,800 years ago.

Seigantoji Temple at Nachi Falls The sacred waters of Nachi Falls Kumano Nachi Taisha
Water is considered sacred in Japanese culture — from thundering waterfalls to mountain rivers to natural hot springs. The Kumano River and Nachi Falls, the tallest single-drop waterfall in Japan, are both revered as spiritual sites, worthy of worship, ideal for purification. Together, they make for an epic riff on the traditional ending of the Nakahechi Route.

Highlights: Take your pilgrimage to the water and float down the Kumano River in a wooden, flat-bottom boat as did pilgrims of centuries past. Later, surrounded by a forest of ancient cedar trees, you’ll bask in the majesty of Nachi Falls.

Details: The boat tour takes around 90 minutes and passes the giant rock where Kumano deities supposedly play the Japanese game Go, along with numerous waterfalls and exotic birds. In Shingu, you can check out your second grand shrine, Kumano Hayatama Taisha, before shuttling to the bottom of the 834 stone steps of the Daimon-zaka. These lead you to the spectacular Nachi Falls and the third and final grand shrine, Kumano Nachi Taisha.

Local culture: At the base of the waterfall, buy a taste of the sacred water for 100 yen — local custom says you’ll be drinking to good fortune and a long life. Back on the coast, don’t miss the catch-of-the-day at the local fish markets.

Relaxation: There are more onsen to enjoy in this area, too. The port town of Katsuura, south of Shingu, is known for its fish markets as well as its restorative coastal springs.

Nakasendo Highway Soba noodles Magome lodging
The Nakasendo Highway connected the old capital of Kyoto with Edo (present-day Tokyo). This historic trade route is a great choice for hikers of all abilities, as the terrain is forgiving and the trail well-maintained. The most popular section runs from Magome to Tsumago, a five-mile hike with beautiful views of Japan’s Central Alps and the Kiso Valley.

Details: The trail between Magome and Tsumago is relatively gentle and well-marked and should only take two or three hours at a leisurely pace. Avoid the crowds and hike it on a weekday, as weekends can get packed.

Local culture: Forget ramen while you’re here, and instead try the regional specialty — soba noodles — in Tsumago, the better-preserved of the two towns. Rest stops (tateba) were located midway between post-towns in the Edo period; today, halfway along the trail, you can take a breather at Tateba Tea House, a historic rest stop.

Relaxation: After a traditional Japanese dinner at your ryokan in Tsumago, stroll through the village streets wearing the yukata robe supplied by your inn.

Nakasendo Trail:
Side trip to Matsumoto

Matsumoto Castle Kappa bridge Kamikochi
A gateway to the Japanese Alps and home to one of Japan’s oldest castles, Matsumoto is a go-to destination for those who want to add some city culture to their outdoor adventures. The Matsumoto area offers plenty of natural beauty to explore on foot, ancient traditions to observe, and avant-garde art to take in. It’s located just north of the main Nakasendo Trail and is also a convenient base for hiking in Kamikochi, one the country’s most pristine and scenic regions.

Highlights: Step back in time with a visit to the iconic, 16th-century Matsumoto Castle. Nicknamed “Crow Castle” for its onyx exterior, it provides a bird’s-eye view of the Northern Japanese Alps from the top of its tower.

Details: In town, check out the Matsumoto City Museum of Art, which features the dotted avant-garde work of Yayoi Kusama, a native of Matsumoto. For fresh air, head west to the nearby alpine valley of Kamikochi, starting point for multi-day treks and leisurely day hikes along the Azusa River. The trails around the Kappa wooden suspension bridge are the most popular.

Local culture: In Matsumoto, learn more about miso soup from a sixth-generation miso maker, or sample all things wasabi at the Daio Wasabi Farm.

Relaxation: After a day on your feet, relax at the therapeutic baths at Asama Onsen, once restricted to the noble class, but now open to commoners and royalty alike. Or for suds you can sip, hop on over to Matsumoto Brewery, a tiny taproom serving craft beer.

This guide is proudly produced in partnership with the Japan National Tourism Organization.
✖
travelstoke
Download the mobile app
stoked by