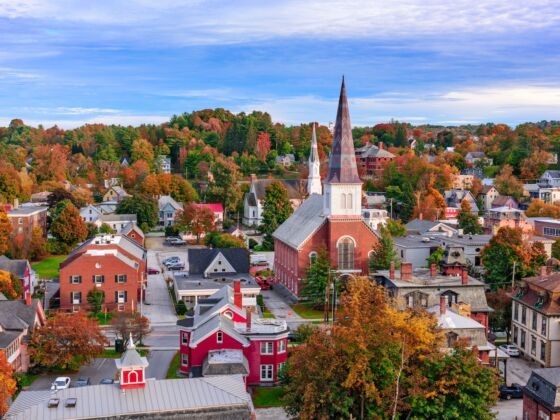 Montpelier during fall. Photo: Shutterstock/Sean Pavone
We all have different feelings about traveling right now. When you’re ready, we hope you feel safe, inspired, and excited to explore Vermont.

Before you travel to Vermont, please review all travel guidance and restrictions currently in place.

In Vermont, the seasons unravel at a leisurely pace. You can watch the glory days of summer slowly morph from lake vistas and maple creemees to the unparalleled foliage of a New England autumn. Winter, and all its thrills of chasing down pristine, powdery slopes, thaws into the promise of bloom — and sugaring season.

But regardless of season, Vermont shines brightest outdoors — a fact that’s especially pertinent in the COVID era. With a trove of 55 state parks, 20 alpine and 30 cross-country resorts, and numerous outdoor events throughout the year, the state has long been a magnet for meditative Instagram strollers, hikers searching for a good adrenaline rush, or just those in the mood for some chill, family fun. And passionate foodies? Days could be spent at orchards and farms apple-picking, maple-tasting, and cheese-sampling. All socially distanced now, of course.

But let’s go beyond the vibrant fall leaves and shelves of pure maple syrup — here’s how to take in the Green Mountain State across the year, in all its glorious, unraveling colors.

Note: Some of the businesses and sites listed below may not currently be operating as described due to safety guidelines. Please contact all locations prior to visiting.

This post is proudly produced in partnership with the State of Vermont.

Summers in Vermont translate into long days and breezy, balmy nights — which explains the state’s affection for creemees, a rich, “creamy,” 100%-Vermont take on your favorite soft-serve ice cream. If you haven’t had one, you haven’t had one.

In fact, have two. Hop on the Vermont Maple Creemee Trail, where venturing from stop to stop absolutely feels like being a kid in a candy store. The trail includes state mainstays like Allenholm, the oldest commercial apple orchard in Vermont (1870!), and shops like Morse Farm Maple Sugarworks, where fresh kettle corn and traditional treats like maple candy and maple fudge are hard to resist. And the free tastings? Nearly impossible.

Even with social distancing in mind, it’s possible to enjoy an outdoor festival or two this season. The calendar is peppered with events like the Jenny Brook Bluegrass Festival (in June), where nearly 30 acts have the chance to get your toes tappin’. The Vermont Brewers Festival should be back in 2021, too — it’s one of the country’s best beer fests, and it’s right on Lake Champlain.

And, yes, Vermont knows beer, with 56 craft breweries to choose from. If that number doesn’t sound impressive, keep in mind the state is 10% the size of Florida. Options are spread everywhere, from the family-run Alchemist in Waterbury to The Vermont Pub and Brewery in Burlington, the state’s oldest and a visionary pioneer from 1988.

Of course, maple butter and brews require balance. Spend your summer days outdoors — think waterfalls and plunge pools (Bingham Falls comes to mind), driving scenic routes in search of binocular views, or channeling your inner zen by fishing on secluded lakes. And bust out those bikes! The Lamoille Valley Rail Trail is set to be New England’s longest, coming in at 93 miles from the Connecticut River Valley to just shy of Lake Champlain. Mountain bikers jonesing for a little more technical terrain should check out Mt. Snow’s 30 miles of trails; meanwhile, eager novices and families may enjoy the 14-mile Hoot, Toot & Whistle trail along the western edge of the nearby Harriman Reservoir.

For a little outdoors R&R, one particularly gorgeous getaway is Lake Groton — a place that even Thoreau would have approved of — in Groton State Forest, near Montpelier. There are seven state parks in this area, some so close you can walk between them. Nab a campsite at Stillwater State Park, and you could spend an afternoon or two also exploring Boulder Beach State Park, right across the water. See them all, if you can, as entry to one gets you entry to them all.

Fall:
A world in orange, crimson, and gold

This is the season when Vermont comes alive with absolute unparalleled resplendence. Millions of maple trees — approximately one in every four Vermont trees is a maple! — shed their green hues in favor of a gamut of colors, including the deepest reds and brightest yellows. The state is 76% forested, and its unique ecology of soil, moisture patterns, and landscape are all factors contributing to a rich tapestry of colors that result in stunning drives and a painterly ambiance.

If you’re feeling overwhelmed about where to go, sign up for weekly fall foliage reports delivered straight to your inbox — they’re filled with suggestions of scenic drives and places to pause and savor the sights. Because of this, fall is the perfect season to check out one of the state’s 10 designated byways, which range from 14 to over 400 miles. Many are dotted with art galleries and souvenir shops, making them well-suited for art fans as well as leaf-peepers.

Wherever you choose, though, inspiration will find you — outdoor art exhibits and sculpture parks crisscross the state, each a COVID-friendly opportunity to explore Vermont’s art scene. Many are easily accessible and make great fodder for morning walks — case in point, the downtown Rutland murals.

Fall is still harvest season, of course, and pleasant strolls can also be had at many of Vermont’s farms. Sam Mazza’s in Colchester, just one prime example, grows fresh produce on 250 acres and features an in-store bakery and fantastic corn maze for the family. Then there are farm stands and farmers markets — about 85 of the latter dot the state, with tiny towns holding markets on the village greens. The Burlington Farmers Market has an impressive lineup, though markets in smaller cities, like Rutland and Montpelier, certainly hold their own.

Tip: If you’re looking for great foodie experiences, lean on Dig In Vermont for all you need to know.

The feel of powdery snow underfoot. The swoosh of skis on steep slopes. Pale blue, mountainous horizons. A Vermont ski trip is hard to beat, and the state’s 20 alpine ski resorts and more than 7,000 skiable acres give you plenty of terrain options.

Killington Ski Resort, the largest in the eastern US with a vertical drop of 3,050 feet, naturally attracts a lot of attention, but — especially during COVID — keep an eye on the state’s smaller resorts, too. Ski Vermont can help you vet your options, and they’ll keep you up-to-date on statewide conditions.

Winter in Vermont doesn’t have to be confined to skis, of course. Spots like the Mountain Top Inn and Craftsbury Outdoor Center provide dozens of miles of snowshoeing trails. Winter hiking is another option, with 55 state parks to choose from (you can even winter-camp in a cabin). There’s also an abundance of ice-fishing opportunities — Lake Champlain attracts scores of avid anglers throughout the winter, each looking to catch landlocked salmon, perch, bluegill, and northern pike.

If you’re into decorating for the holidays, Vermont gives you the option of cutting your own Christmas tree and bringing the scent of fresh fir to your home away from home. Or simply enjoy the coziness of being indoors, curling up with a book of poems by the iconic Robert Frost, whose farm is a National Historic Landmark in South Shaftsbury.

Otherwise, there’s no better time to hit the Vermont Cheese Trail (yep, this state has all the best things). Check out stops like Grafton Village Cheese, where small-batch, award-winning aged cheddars are still made by hand; or Ice House Farm in Goshen, with its grass-fed goats grazing over a charming 18th-century property. Around 40 other stops populate the map, representing some of the country’s best cheeses — sheep, cow, and goat.

Learning about maple syrup is as fascinating as tasting it is delightful. With Vermont producing almost 50% of the country’s stock — almost all from sugar maples — spring is a great time to roll up your sleeves and get behind the scenes to discover how the syrup goes from tree to your plate of pancakes. Fun fact #1: Some 40 gallons of maple sap — collected from several mature trees — makes just one gallon of pure maple syrup. No wonder it’s called liquid gold!

Maple Open House, a state-wide event connecting all the best producers, is typically held at the end of March, and it’s a great time for sugar-makers to do their victory dance. Sugar novices, on the other hand, will get to learn about the process and see clouds of maple-scented steam curling from sugarhouse steam stacks.

As the natural world shifts from the nipping cold to buds coming to life, this season is the perfect time to explore the state’s lesser-known but spectacular gardens: Hildene, the Lincoln Family Home, is a historic spot to stroll and appreciate the manicured landscape; Cider Hill Gardens, in Windsor, features peonies, daylilies, and elegant cherry blossoms, with an art gallery to boot; and the beloved Shelburne Museum contains over 20 gardens filled with perennials and annuals.

And skiers, take heart — winter sports don’t disappear with the freezing temperatures! Spring is the time for savoring the slopes at the bigger resorts without the crowds, for sitting on an après-patio with a pint, taking off your jacket, and having the sun hit your skin with foreshadows of summertime. There aren’t many places where you can have it all, but Vermont is certainly one of them.

This post is proudly produced in partnership with the State of Vermont.
✖
travelstoke
Download the mobile app
stoked by