From the Zagros Mountains in Iran to the Nile River of Egypt, the Middle East covers an ethnically, culturally, linguistically, and geographically diverse area that can’t be flattened into one homogeneous region. The food served in each country is just one example of the Middle East’s diversity, from Turkish and Palestinian cuisine to Jordanian and Iranian, to name but a few.

Despite the many culturally and culinarily unique aspects in the region, centuries of trade, migration, and conquests have led to an overlap in ingredients and cooking techniques. This is especially apparent in Middle Eastern sweets made with ingredients like dates, walnuts, pistachios, honey, rose, orange blossom water, and sesame seeds.

Many Middle Eastern desserts prominently feature nutty and floral flavors. They can be intensely, sometimes even cloyingly, sweet, which means they pair well with a freshly brewed cup of tea or Turkish coffee. Pastries are often soaked in a rose, orange blossom, or honey-flavored sugar syrup, adding texture and sweetness.

Each culture has its own variations on how these ingredients are used. Whereas Lebanese baklava may use walnuts, Turkish baklava might use pistachios or hazelnuts. What’s called basbousa in one country might be called hareesa in another. Friendly debates about where the “original” and “best” version of a dish are frequent. We think the best version of any dish is the one that’s right in front of you, ready to eat.

Here are 6 Middle Eastern desserts you’ve got to try featuring a few of the most popular ingredients in the region: pistachio, rose, and honey. 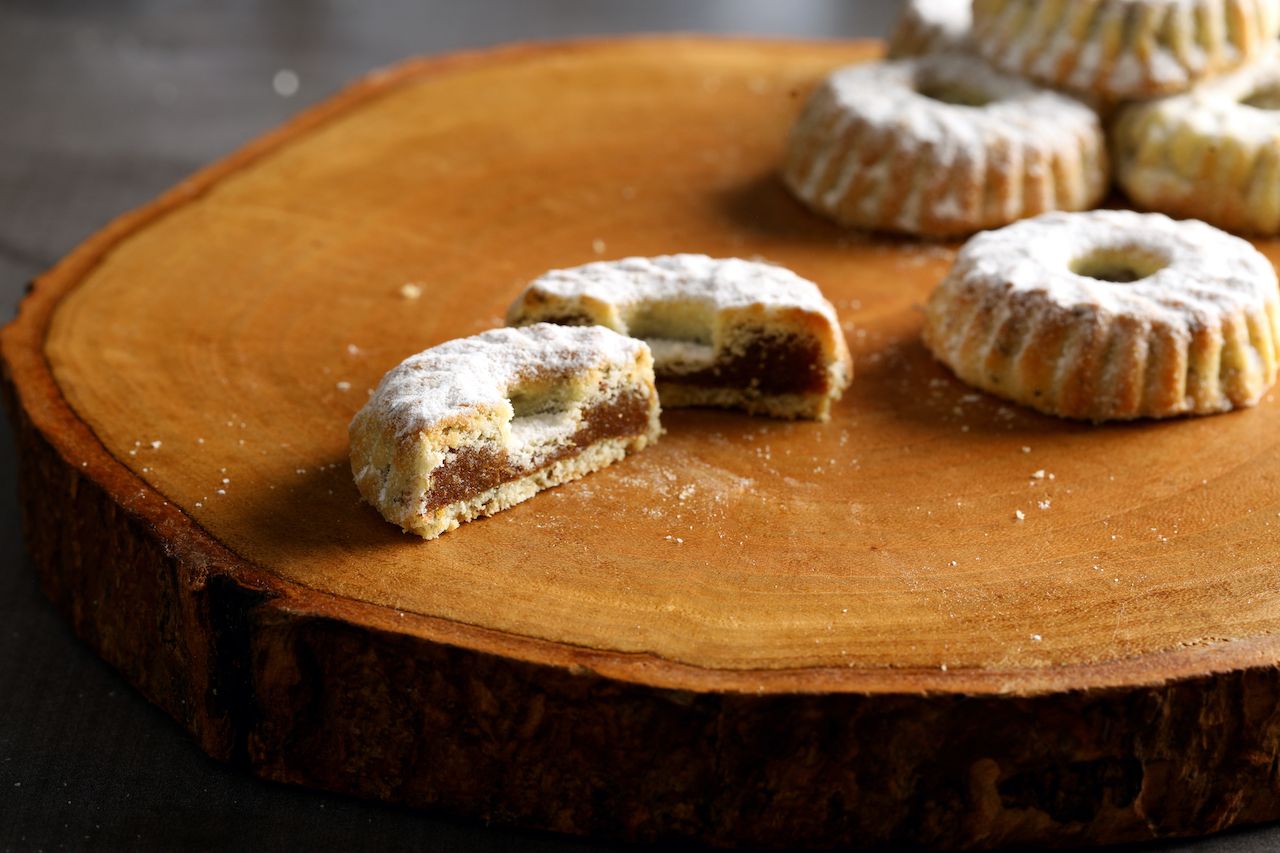 Ma’amoul is a shortbread cookie made from semolina flour stuffed with pistachios, walnuts, or dates flavored with orange flower water. Popular throughout Turkey and the Arab world, it’s a celebratory cookie that plays a part in all the major religious celebrations of the region. Ma’amoul is a centerpiece on Eid al-Fitr for Muslims, Easter for Christians, and Purim for Jewish people. The dome shaped cookie is often decorated using a wooden mold stamped with intricate designs. 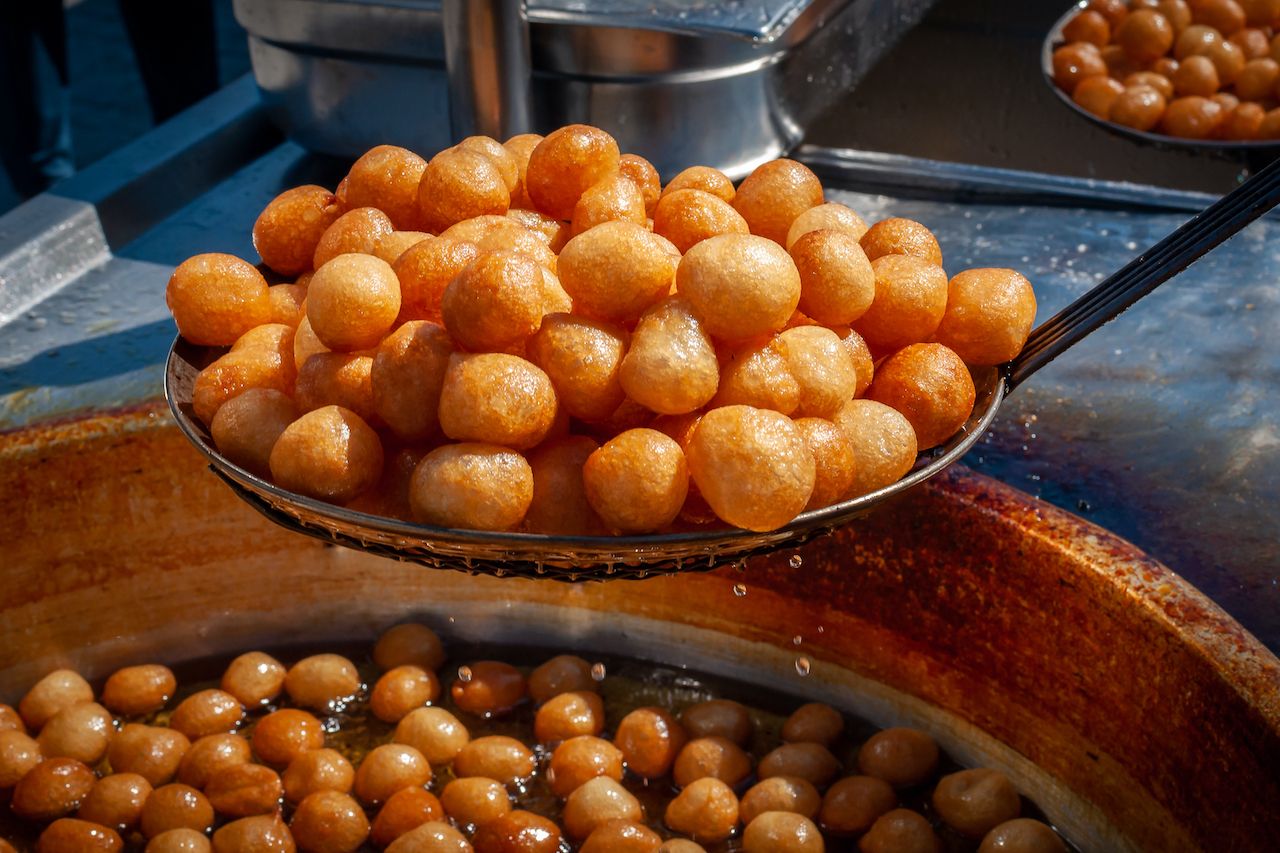 Recipes for luqmat al-qadi can be traced back to the 13th century, and it’s not hard to see why these sticky-sweet balls of dough have stuck around. Also known as zalabiya, awameh, or luqmat al-qadi, these small balls of leavened dough are deep fried and soaked in honey or rosewater syrup. Depending on where you are in the region, lokma will be spiced with cinnamon, cardamom, or saffron.

They’re a popular treat throughout the countries that were part of the former Ottoman empire, and are often eaten during times of celebration like Ramadan or Hanukkah. According to the Greek poet Callimachus, the Greek version of the dish, called loukoumades, were nicknamed “honey tokens,” and handed out during the Olympic games. 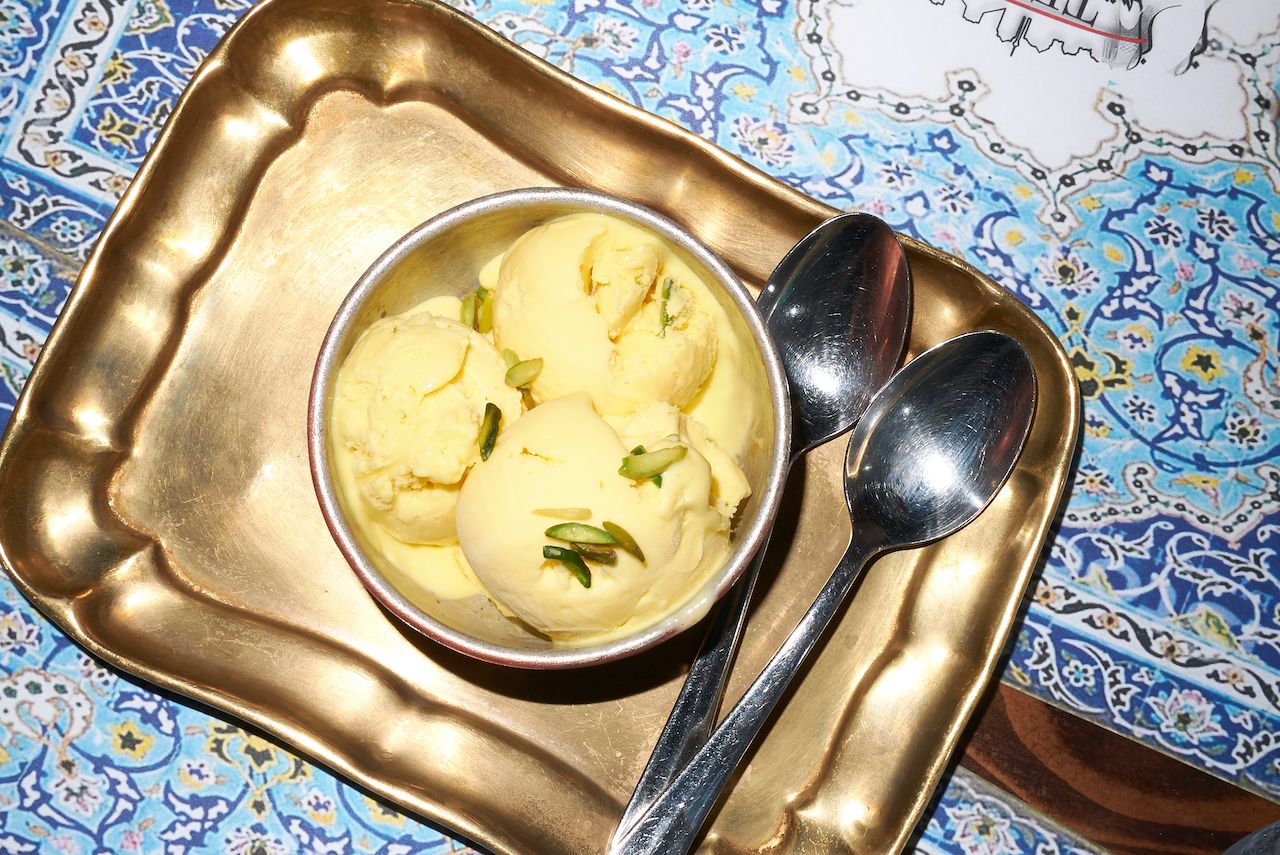 Bastani is an Iranian ice cream flavored with rose, saffron, vanilla, and pistachios. It first appeared around 500 BCE, making this custard-based ice cream one of the first ice creams in the world. With its rich nutty and floral flavors, it’s decadent and luxurious, perfect for a hot summer day. It’s used to make other popular treats as well, like ab-haveej bastani, which is an Iranian carrot juice ice cream float topped with bastani. 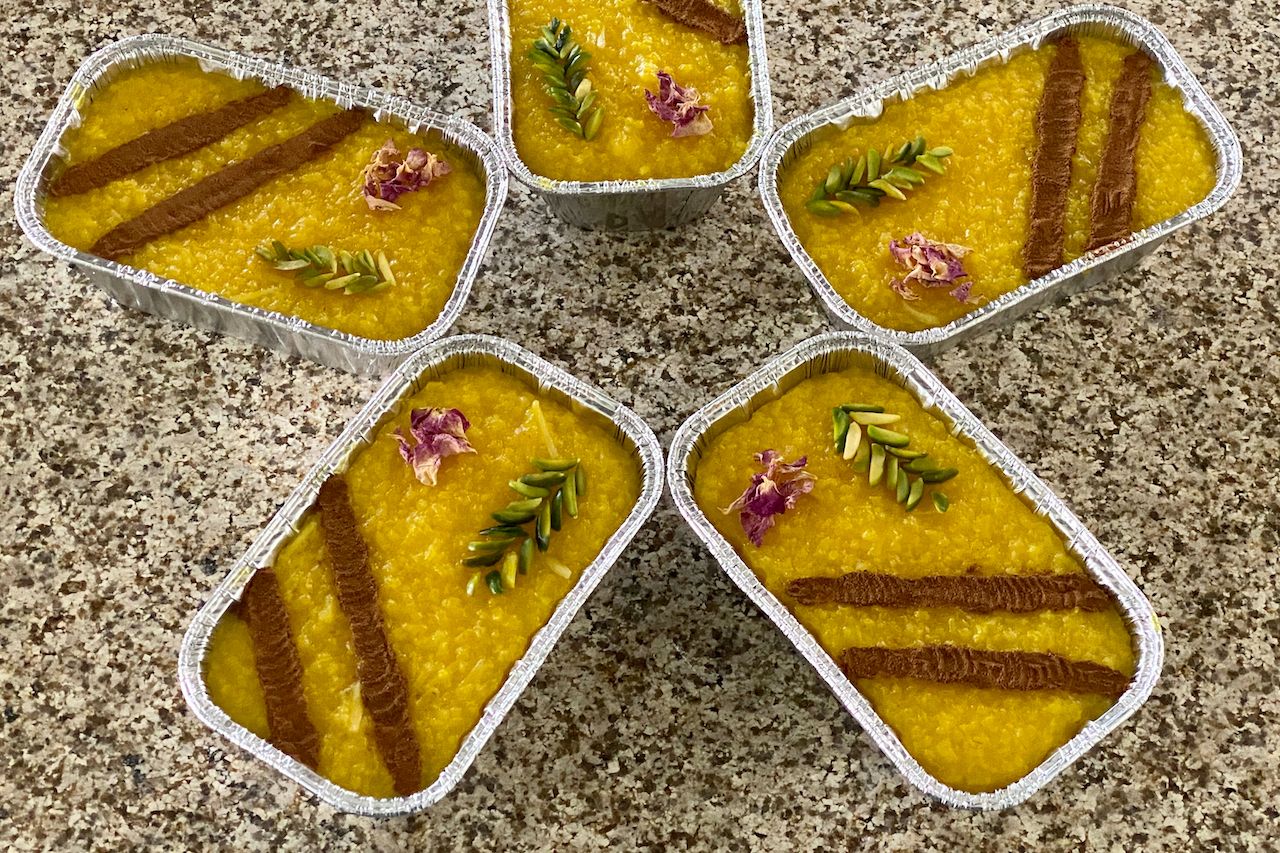 If there’s one thing that can unite the world, it just might be rice pudding. Versions of this comforting dessert can be found on every continent except Antarctica. In Syria and Lebanon, riz bi haleeb is served cold, flavored with rose water, and often garnished with pistachios. In Turkey, sütlaç is also served cold but is flavored with cinnamon.

The Iranian take on this dish, called sholezard, has a deep yellow hue from saffron. A dash of fragrant rosewater is often added to the recipe, and the resulting dessert is often decorated in elegant and intricate patterns using a combination of rose petals, almonds, pistachios, and cinnamon. Sholezard can be prepared anytime of year, but it’s especially popular on celebratory occasions like nowruz, or Persian New Year. 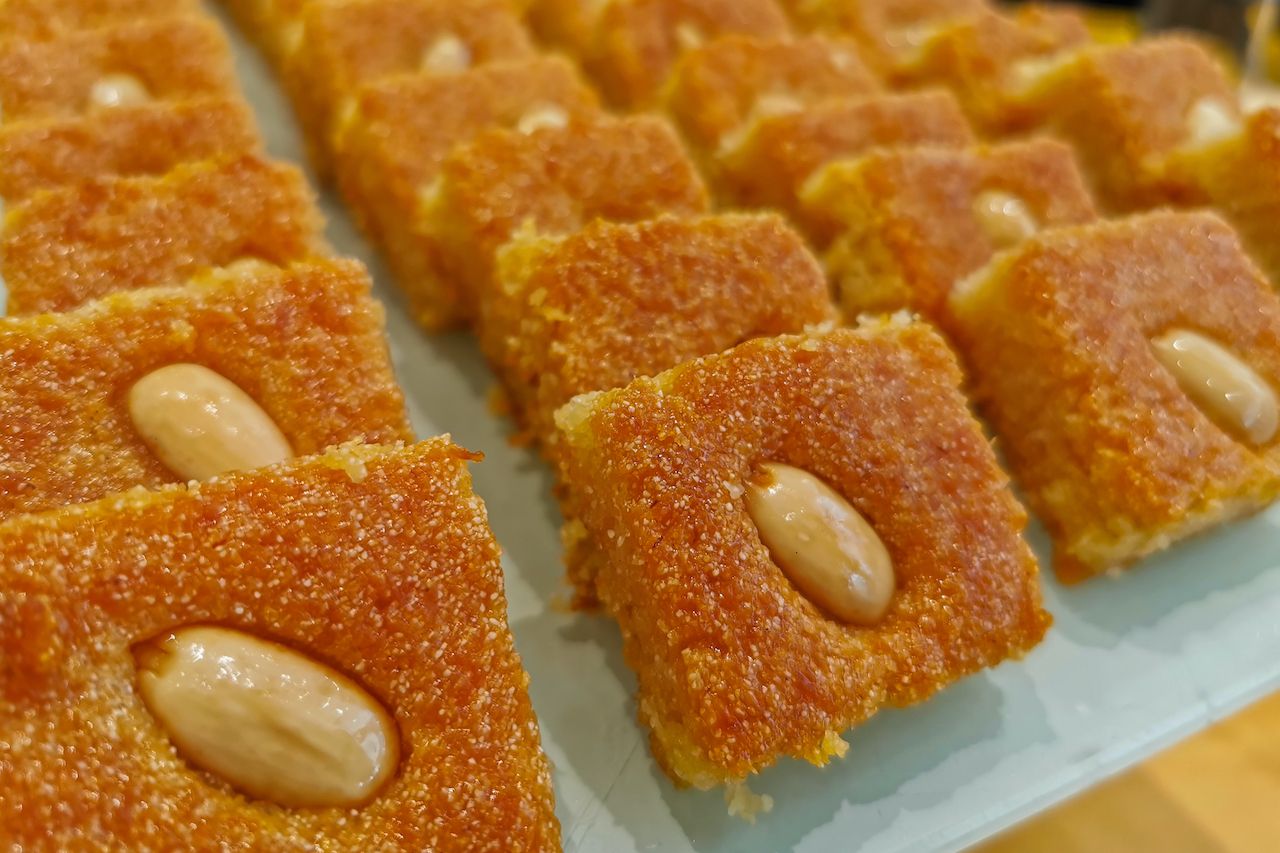 Originating from Egypt, basbousa is a semolina-based cake that’s cut into diamond or square shaped pieces and is topped with almonds soaked in a rose or orange blossom-flavored sugar syrup. It’s popular throughout the Arab world and Middle East, and goes by a variety of different names. In the Levant, it’s called namoura of hareesa (not to be confused with the spicy condiment, spelled harissa), whereas in Turkey it’s called revani. Moist, chewy, and devastatingly sweet, this cake pairs perfectly with a cup of tea. 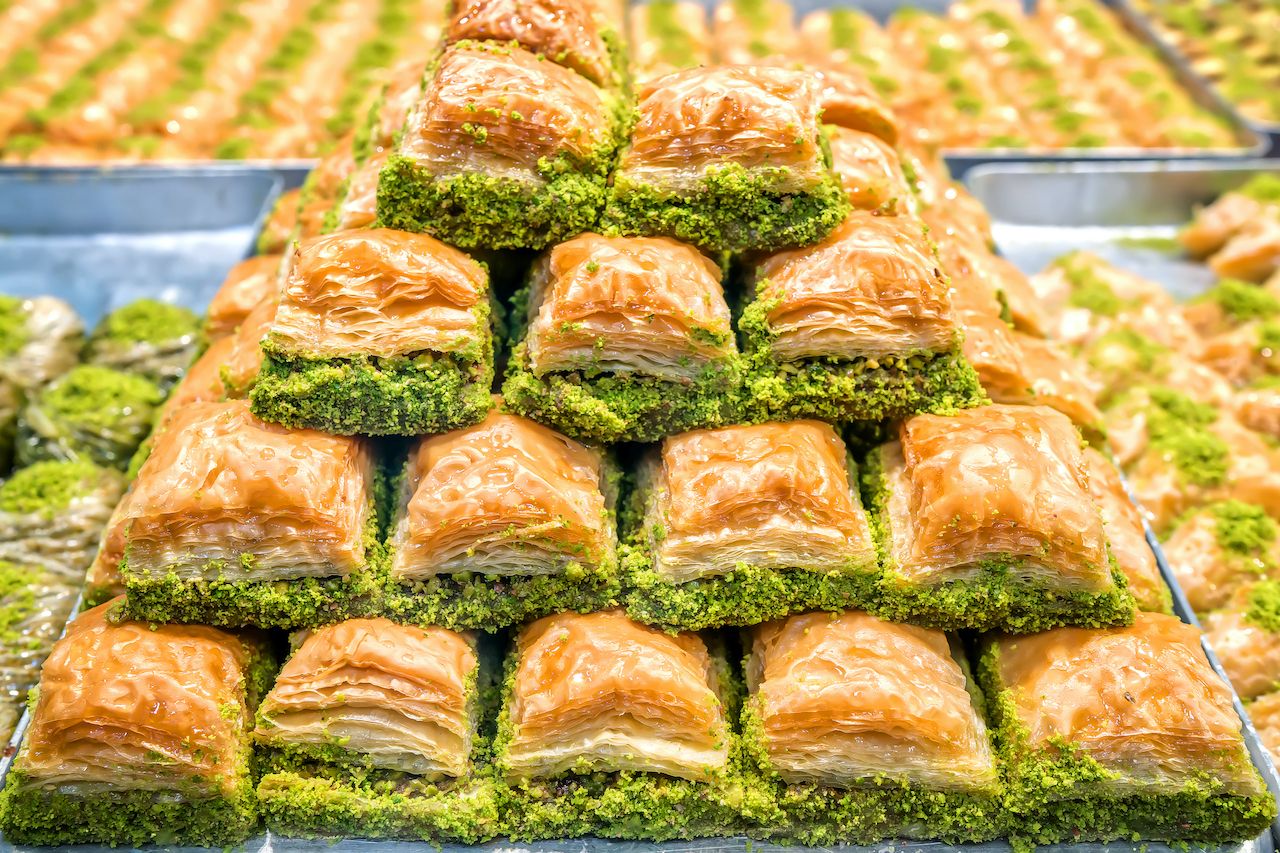 No list of Middle Eastern desserts would be complete without baklava. Originating in the royal kitchens of the Ottoman empire, this filo-based pastry is especially popular in Turkey and Iran. Some theories claim that an early version of baklava made with flatbread was first prepared during the reign of the Assyrian Empire around 800 BCE. However, most historians agree that the modern version of the dessert is a product of 15th century culinary masterminds in Constantinople, who prepared it for aristocrats. Records kept in the Topkapı Palace kitchens report that dessert was prepared there in 1473.

Today, the dessert consists of layers of paper thin filo dough filled with chopped walnuts, pistachios, or hazelnuts. The layered dessert is then soaked in a sweet rose, orange blossom, or honey-flavored syrup. Because of all the fragile layers of dough, making baklava can be a labor-intensive process, but the decadent pastry is worth the effort.

DessertThe 10 Desserts You Need To Try in Greece That Aren’t Baklava
Tagged
Dessert Food + Drink
What did you think of this story?
Meh
Good
Awesome