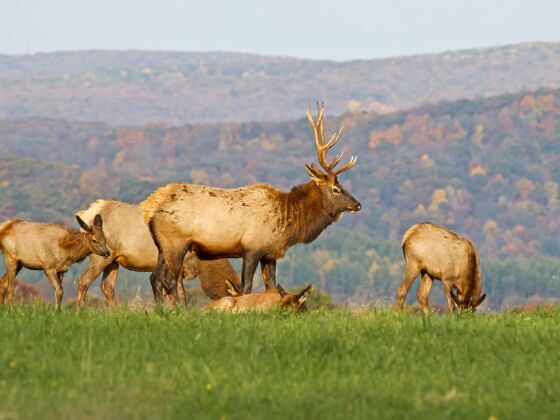 From its very beginnings as a US state, Pennsylvania has been steeped in nature. After all, it’s right there in the name — “Pennsylvania” means “Penn’s woods.” Though centuries have passed since that moniker was first applied, less has changed in regards to those woodlands than you might imagine.

Across nearly 30 million acres, the Keystone State lures solo travelers, weekend warriors, and outdoor lovers of all stripes to its rocky climbs and rollicking whitewater, its old-growth forests, and the trails that wind through it all. If true adventure’s what you’re after, you’ll find it in Pennsylvania. All you have to do is step outside.

This post is proudly produced in partnership with Visit Pennsylvania.

In the state’s northwest corner, massive hemlocks, pines, and oaks have stood for centuries and comprise what Men’s Journal has called the “Best Old-Growth Forest” in America. Welcome, nature fans, to the incomparable Cook Forest State Park, less than two hours from Pittsburgh.

On foot: The 8,500-acre state park was first established to protect these sentinels, and a walk through the park’s old-growth Forest Cathedral Natural Area feels truly sacred. Multiple trails loop through this neck of the towering woods, including the Longfellow Trail, part of the 4,800-mile North Country National Scenic Trail.

In the saddle: The first Europeans arrived in Cook Forest — then the hunting grounds of the Iroquois — in the 1700s. Perhaps the best way to see this special place is the same way they did: from the back of a horse. Book a tour with a local outfitter to explore the trails built by the Civilian Conservation Corps, many looping through stands of red and white pine and into the Forest Cathedral.

Equestrian bonus: Across Pennsylvania’s 12 state parks are thousands of miles of equestrian trails. Saddle up for a two-hour loop in the Clarion River tract between Cook Forest and Clear Creek state parks, where you’ll wind through lush pine plantations. Every season offers something different to see from the saddle.

On a crisp autumn day atop Hawk Mountain Sanctuary in Berks County, the view is truly something to behold. There’s blazing foliage for miles in every direction, and against that dramatic backdrop, the mountain’s namesake: hawks and other raptors, sometimes by the thousands, on their annual migration.

Know the story: These fantastic creatures have been riding wind currents around Hawk Mountain for generations. Their abundance drew hunters until, in 1934, a spitfire conservationist named Rosalie Edge bought the property and established it as Hawk Mountain Sanctuary, the world’s first refuge for birds of prey.

What you’ll experience: The haven for kestrels, vultures, bald eagles, falcons, owls, and other avian species hosts a major migration count from August to December, in addition to frequent lectures, family events, and groundbreaking scientific programs. The sanctuary is open to the public all year.

Lace up: Make sure your boots are broken in. For some of the best bird-watching anywhere on Earth, you’ll want to hit the hiking trails, which range from the short, accessible walk to South Lookout, just 175 years from the entrance, to the rocky scramble along Kittatinny Ridge to the Appalachian Trail.

Pennsylvania’s Ohiopyle State Park is one of the country’s best for anyone looking to make a splash. The Youghiogheny River that rushes through it is home to some of the most prized whitewater in the East, and everyone from first-time paddlers to experienced whitewater kayakers can find their definition of adventure here.

Float on: The middle stretch of the “Yough,” as it’s locally known, runs straight through Ohiopyle State Park and is perfect for novice rapid runners. For something more stirring, plan to float the next stretch of river — the “Lower Yough” is one of the best-known whitewater runs in the US.

Other water fun: You don’t need a boat, board, or kayak to have a blast. In the summer, when water levels are lower, the rock slides and falls of nearby Meadow Run create the coolest natural water park you’ve ever seen. It also happens to be a beloved fly-fishing hole, so be sure to avoid anglers’ lines as you careen down the sandstone slides into the pools below.

For more speed: The best Ohiopyle fun out of the water is had on two wheels. Bring along your bike (or rent one from a local outfitter), and hit the Great Allegheny Passage, a rail trail that spans an epic 150 miles. It has incredible views but almost no elevation gain, which makes it great even for small kids. For a bit more adrenaline, tackle the rocky terrain of the surrounding Laurel Highlands on one of many groomed mountain biking trails.

When you picture Pennsylvania, your mind may not conjure images of sandy beaches lapped by waves, but that’s exactly what you’ll find at Presque Isle State Park on the shores of Lake Erie. This expansive peninsula is Pennsylvania’s only “seashore,” and its swimming, fishing, and boating are tops in the region.

By rod and reel: Anglers looking for big northern pike will get plenty of bites in Presque Isle Bay — especially Misery Bay, which is a hotspot for the carnivorous fish in the spring. But the real monsters are the muskellunge, or “muskie,” that a determined angler can nab in the fall. At more than three feet long, these fast, aggressive fighters will leave you with either a real trophy or a great fish tale.

By auger and jig: In the winter, when the ice thickens, the sheltered bay provides some protection from the elements. Those willing to brave the cold can catch walleye, perch, or even steelhead.

Other things to do: Even if you don’t plan to cast a line, the best way to explore Presque Isle is still on the water. Rent a kayak for a serene paddle around the park’s lagoons and ponds or, in the summer, jump on a free pontoon boat tour.

Endless outdoor adventures abound every season of the year in the Poconos, and winter is no exception. The mountain range in northeast Pennsylvania — with an Algonquian name that means “stream between two mountains” — is full of scenic delights, recreation opportunities, and Gilded Age escapes.

On the slopes: Six major ski and snowboard resorts together offer hundreds of acres of terrain, from the winding, beginner-friendly Paradise Trail at Blue Mountain Resort to Camelback Resort and its near-vertical double-black-diamond Cliffhanger. All six offer night skiing, and even in years with low accumulation, snowmaking operations mean almost every day’s a powder day.

Beyond skiing: The region is crisscrossed with phenomenal snowshoeing and cross-country skiing trails too, and you can even take a sleigh ride or hook up with a team of huskies and go dogsledding. If horsepower is more your thing, the enormous and ridiculously scenic Delaware State Forest is full of snowmobile trails. Nearly 115 miles are open to the public, and close to two-thirds of those are kept regularly groomed.

The après scene: When it’s time to warm up, traditional mountain getaways and storied resort communities like Milford, Jim Thorpe, Stroudsburg, and Lake Wallenpaupack are loaded with places to shop, eat, and stay.

Come for the elk — the largest free-roaming herd in the northeastern US — and stay for the dark skies, rushing rivers, and 2 million acres of public land that make up the Pennsylvania Wilds. Located in the center of the state north of I-80, it’s an area the size of Yellowstone National Park with landscapes and adventures every bit as diverse and exciting.

No binoculars needed: Encapsulating all of “Elk Country,” the Pennsylvania Wilds live up to the four-legged nickname — there are close to 1,400 animals in the wild herd that resides here. Your best chance of viewing them is around the town of Benezette.

Go dark: In the Susquehannock State Forest, some 60 miles from the nearest city (and thus, the nearest light pollution), you’ll find Cherry Springs State Park. In 2008, it was certified a Gold Tier International Dark Sky Park (one of only seven in the US). The trek to get there is worth every mile, the skies nothing short of spectacular.

Other things to do: Close to 100 miles of the Allegheny and Clarion rivers are designated National Wild & Scenic Rivers, and they flow through a staggering landscape of big timber and rocky cliffs. For more stunning views, visit the Pine Creek Gorge — otherwise known as the Pennsylvania Grand Canyon. For a truly unique perspective, experienced and equipped hang-gliders launch from Hyner View State Park. Even if you’re just spectating, it’s fun to watch them fly over the Susquehanna River, taking in Pennsylvania’s wild beauty.

This post is proudly produced in partnership with Visit Pennsylvania.
✖
travelstoke
Download the mobile app
stoked by