Costa Rica is one of the most picturesque places on Earth. The tiny country is very mountainous, with over 50 volcanoes — five of which are currently active — and dense, tropical forests. Deep in the lush rainforest canopy of the country are countless waterfalls, including the highest one in Central America, El Salto del Calvo. As 25 percent of the tiny country is protected for conservation, most of the cascades are located within some of the 32 National Parks and have entrance fees, but that shouldn’t stop you from checking them out — they’re well worth a few bucks. Here are the seven most amazing waterfalls you should go chasing while in Costa Rica. 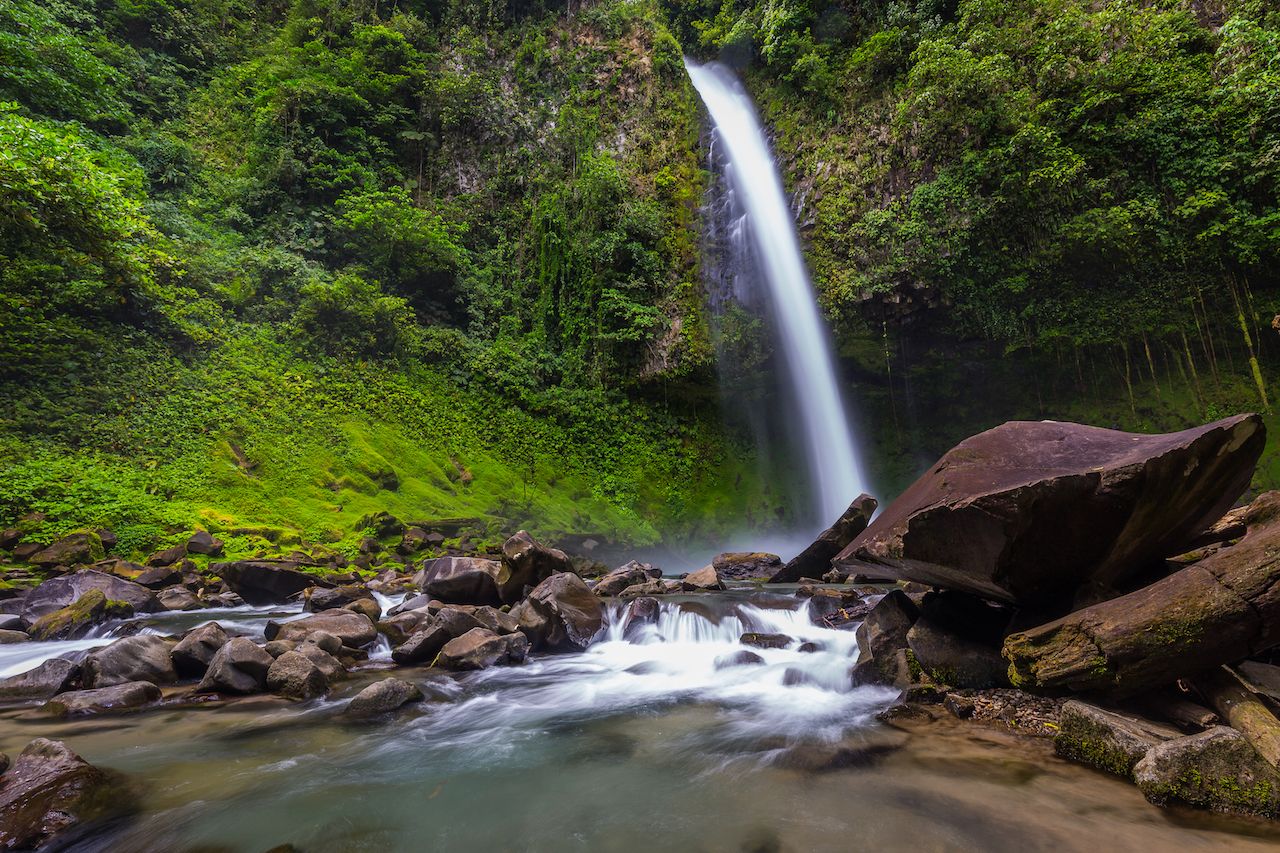 La Fortuna Waterfall, located near Arenal Volcano, is the most famous one in Costa Rica. It’s a 10-minute drive from the center of the town of La Fortuna. If you’ve rented a car, just head down Diagonal 301 or take a taxi for $10 one way. La Fortuna Waterfall opens at 7:00 AM, so arrive early to beat the crowds and have this incredible feat of Mother Nature all to yourself.

To reach the basin of the 230-foot-tall waterfall you’ll have to go down 530 concrete stairs with railings. Don’t fret, the path is super sturdy and well traversed. Once you reach the bottom of La Fortuna Waterfall, go for a leisurely dip in the natural swimming hole to cool off. Make sure to bring lots of water as you’ll have to climb right back up the massive stairway. You can stop at many viewpoints on the way back up if you need to take a breather.

Entrance prices are currently $15 for foreigners, paid in cash at the entry to the fall. The fee is collected by a sustainability nonprofit that manages the park. Note that, even though La Fortuna Waterfall is located in Arenal Volcano National Park, you don’t need to enter the park and pay the park entrance fee to go and see the falls. 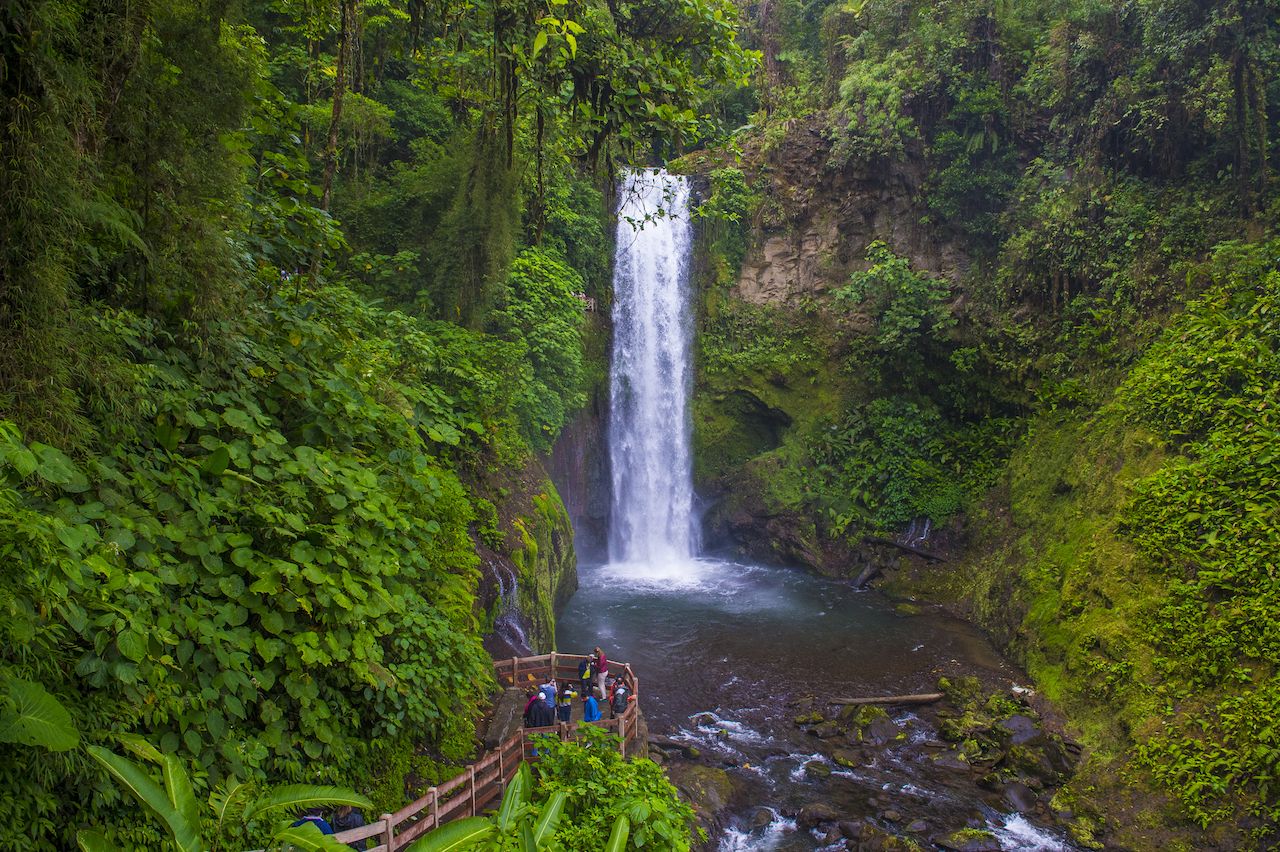 The best way to unwind after arriving in San Jose via a long, international flight is to head out to the La Paz Waterfall Gardens, just an hour and a half north of San Jose. The roads are well paved, so the best way to get there is by rental car — you may be able to get an Uber ride, but it’ll cost you. The trails to explore the park are well marked and pretty low impact, but there are quite a few stairs.

Entrance to the park costs $44 per adult for foreigners and can be bought online with a credit card. The price is steep but includes over two miles of walking trails and an animal sanctuary. Stay the night in the onsite lodge to maximize your time and be the first to enter the park when it opens at 8:00 AM. 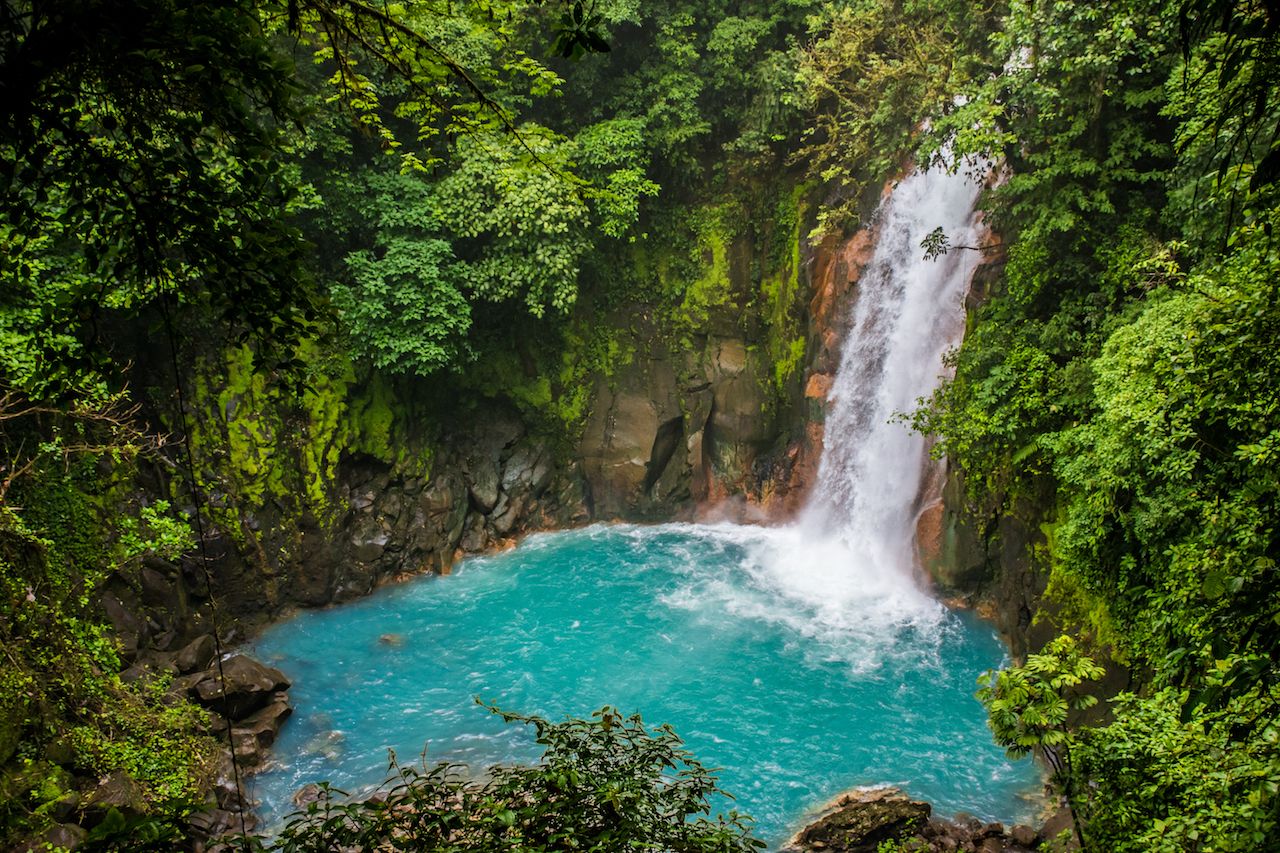 The Rio Celeste Waterfall is located within the Tenorio Volcano National Park. In Spanish, celeste is the name of the picture-perfect blue color of the sky — and this waterfall seriously lives up to its moniker.

The cost to enter Tenorio Volcano National Park is $12 for foreign visitors, which needs to be paid in cash. Aim to arrive by 8:00 AM, when the park opens, in order to fully enjoy all that the nature reserve has to offer. It’s best to rent a car for the day to reach the park, which is about six miles from Bijagua town.

A concrete path cuts through the jungle en route to Rio Celeste Waterfall and is an easy trek, but it does have some stairs. You can’t swim in the turquoise basin, so after you’ve enjoyed the vistas at the waterfall, make your way to the nearby natural hot spring in the park. 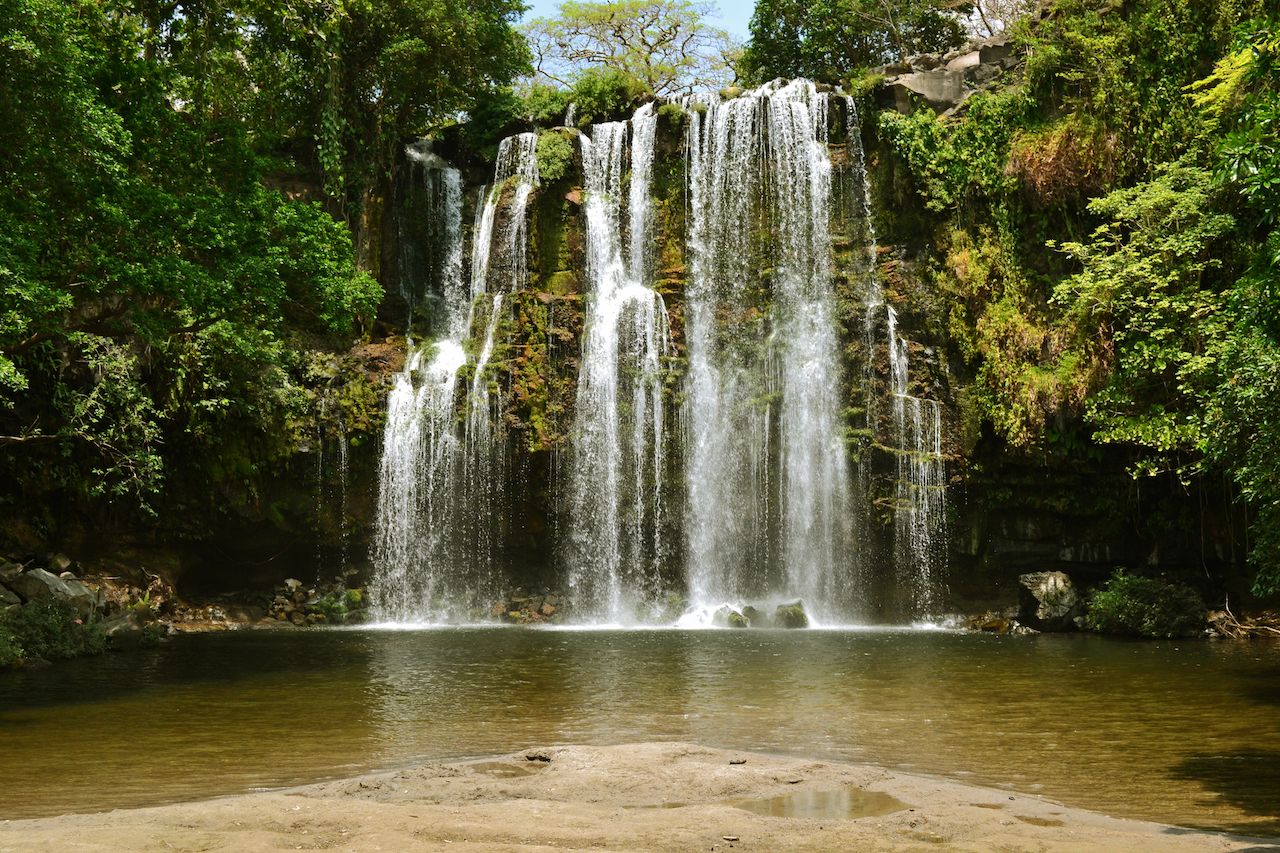 The trail to reach the waterfall is short and takes most people just 10 minutes, but it is pretty steep, so don’t try it in sandals. After the short jaunt, you’ll be rewarded with the sight of a mighty, 50-foot-wide curtain of water that pours down from 40 feet up.

There’s also a natural freshwater beach with white sand on the banks of the pool. And don’t forget to climb with caution on the rocks behind the waterfall for a behind-the-scenes view. 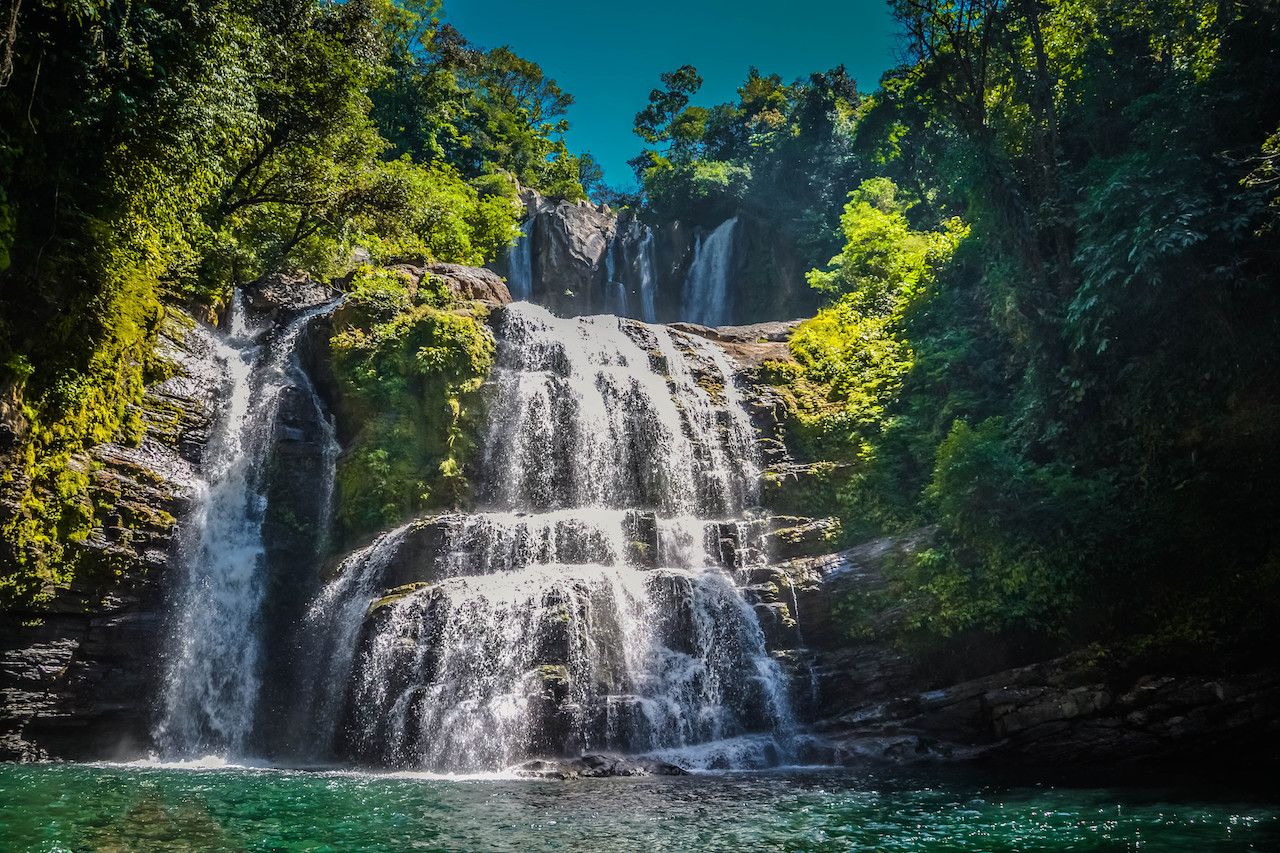 Nauyaca Waterfall is a quick drive inland from the beach town of Dominical and is the perfect waterfall in Costa Rica for those who want to spend time in the jungle. A taxi from Dominical to Nauyaca Waterfall costs $20 each way. The hike is on a gravel road and moderate with many curves up and down the side of a cliff. The round-trip distance is about five miles long. There’s also the option to pay to be taken to the fall by truck for $25 round-trip or $10 one-way.

Nauyaca Waterfall is located on private land and managed by the family who owns the property. It costs $8 to get in and can be paid in cash with US dollars or the local currency, Costa Rican colones.

The fall is truly spectacular with 200 feet of powerful water spillage over multiple tiers of rocks. Take a swim in the lower-level, 20-foot-deep pool. There’s nothing as divine as a cool dip after hiking. Note that it’s impossible to get into the pool during the rainy season due to water surge that makes the flow fast and dangerous.

The Aquiares Waterfall, located in Turrialba, is off the beaten path and a favorite among Ticos, as Costa Ricans call themselves. You’ll need to walk about a third of a mile through the coffee plantations of the Aquiares village to find the Aquiares Waterfall, but it’s marked well on Google Maps. If you get a little lost, ask a local to point you in the direction of the catarata, the Tico word for waterfall.

It’s free to enter to check out the 132-foot cascade that gushes into a natural swimming pool. The best way to experience this waterfall is to float on your back and gaze up at the flowing water. 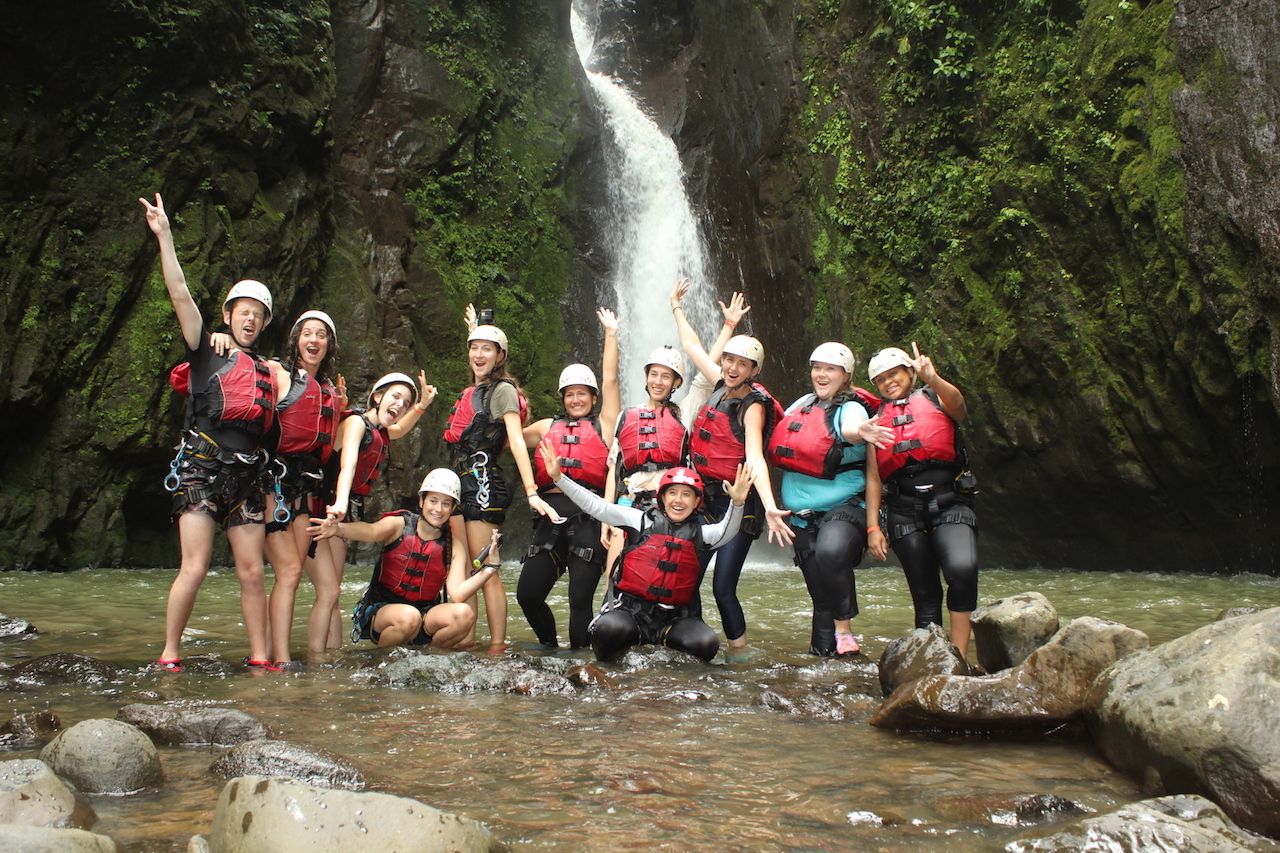 If you’re keen on an adventure, check out the privately-operated Gravity Falls in La Fortuna for a day of exploring a beautiful canyon with several waterfalls. Licensed canyoneering guides will teach you how to rappel down a cliff next to a 132-foot-tall waterfall followed by swinging on a rope into a massive natural pool, playing on natural rock slides, and climbing sheer rock walls. The tour’s grand finale is jumping down a 36-foot waterfall. If it’s too high for you, note that there are several spots for secure waterfall jumping that range in height from 10 to 30 feet.

The half-day excursion can be booked online or at the Desafio office. It costs $125 per person, including pick-up from your accommodation in La Fortuna, gear, and lunch.

Expat LifeHow To Move To Costa Rica and Live There on the Cheap
Tagged
Parks + Wilderness Trip Planning Costa Rica
What did you think of this story?
Meh
Good
Awesome