Flying is probably the worst part of traveling. Nobody wants to cram themselves in a metal bullet with hundreds of strangers for hours, but it’s the price travelers have to pay to reach the beaches of Tahiti, eat the most decadent French pastries, and hike in Patagonia. As rare as it may seem, some airlines are aware and concerned of passengers’ distaste for air travel and try to make flying as comfortable and fun as possible. Here are seven airlines that are trying to distract you from the lack of legroom and the horrid movie selection by turning their aircrafts into pieces of art. 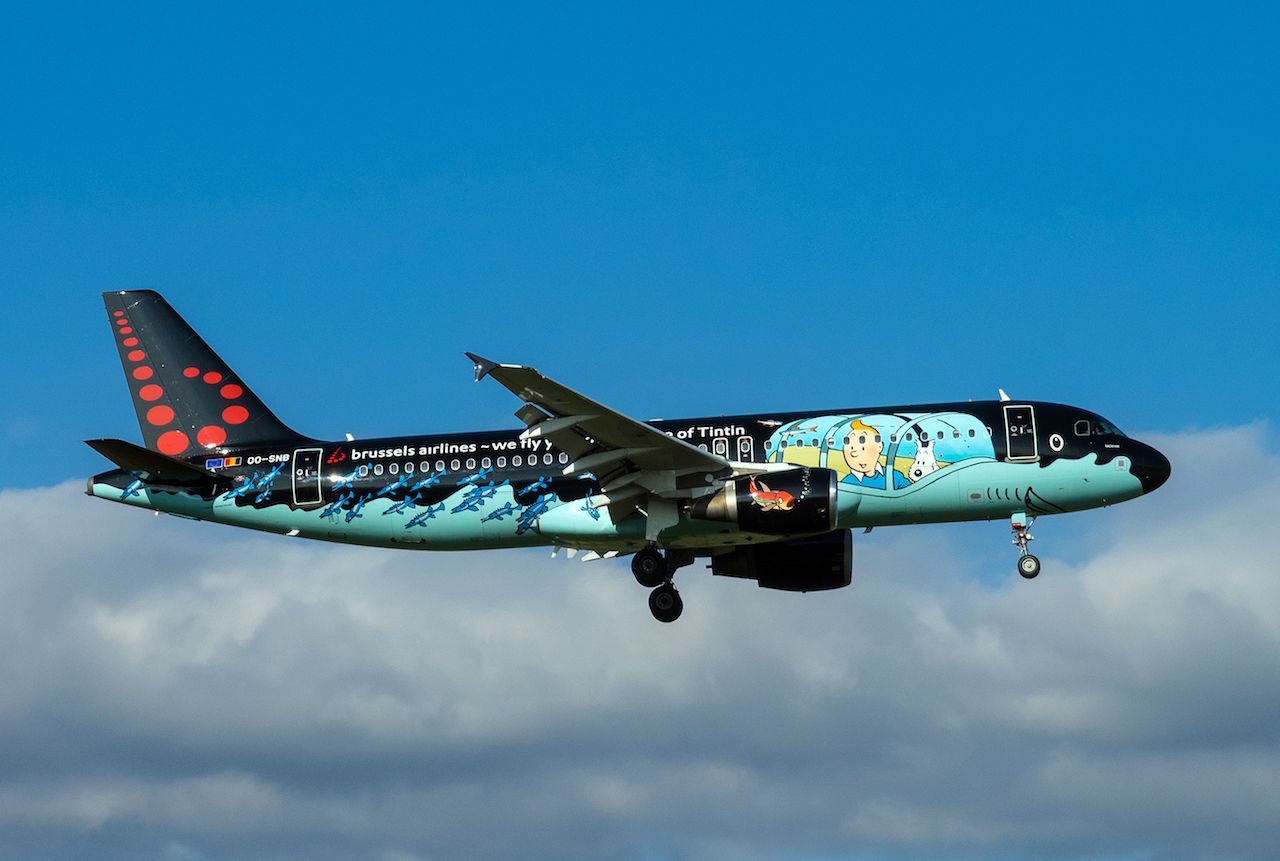 Brussel Airlines has five special liveries in its fleet, but our favorite is, hands down, Rackham, their Tintin-themed Airbus A320. Hergé, the cartoonist who created the series The Adventures of Tintin, was Belgian and is widely celebrated throughout the country, hence this cool tribute by Brussels Airlines. The aircraft’s livery was inspired by the Tintin album titled Red Rackham’s treasure, in which Tintin, his dog Snowy, and his friend Captain Haddock search for pirate Red Rackam’s treasure in a shark-shaped submarine. Inside the aircraft, the cool theme continues with panels from the album decorating the cabin and Tintin comic books available in several languages for passengers to read during the flight. If you want to try to catch a flight in Rackham, check out its itinerary here. 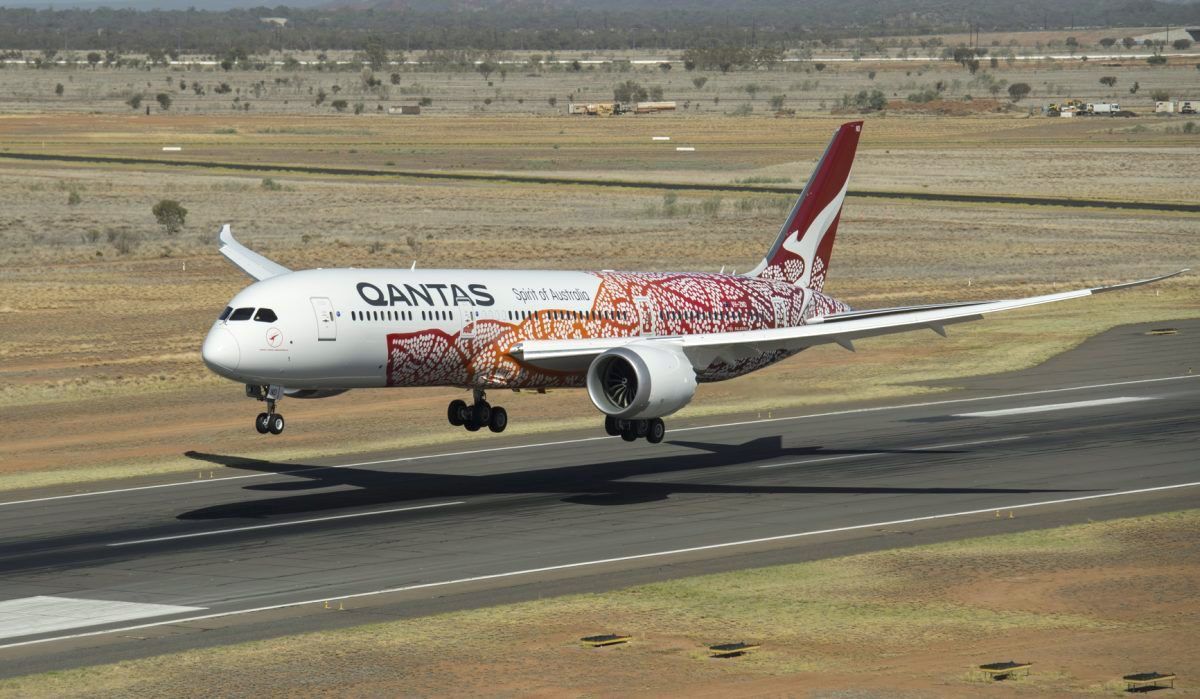 Through it Flying Art Series, the Australian carrier has been honoring Aboriginal and Torres Strait Islander culture since 1994 with five different liveries created by Indigenous-owned design agency, Balarinji, and aboriginal artists. The latest aircraft in the Flying Art Series is the Dreamliner Emily Kame Kngwarreye. This livery was inspired by artwork ‘Yam Dreaming’, painted by the late artist, Emily Kame Kngwarreye. According to Qantas, “The painting captures the essence of the yam plant, an important symbol in Emily’s Dreamtime story, and an important food source in her home region of Utopia, 230 kilometres north east of Alice Springs.” Check out the cool video of the painting process here. Emily Kame Kngwarreye is the second Flying Art aircraft currently in service alongside a Boeing 737-800, named Mendoowoorrji. 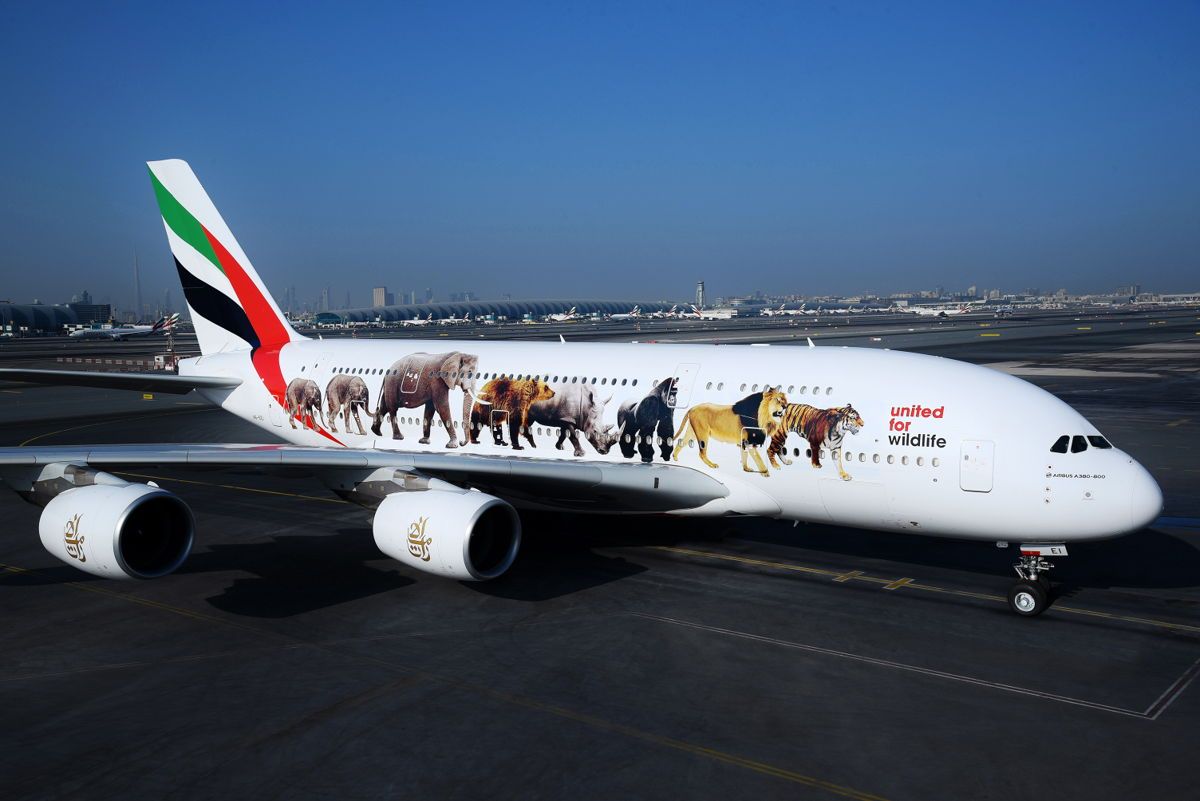 In May 2015, Emirates airlines banned hunting trophies of elephants, rhinos, lions, or tigers on its aircrafts; In November 2015, the airline started flying four Airbus A380s with a United for Wildlife livery to further raise awareness of the dangers the illegal trade of wildlife poses to the natural world. The livery features the planet’s species that are the most at risk due to poaching and the illegal wildlife trade, i.e. a tiger, a lion, a gorilla, a rhino, a bear, and elephants. Check out one of these airplanes being fitted with its new livery here. 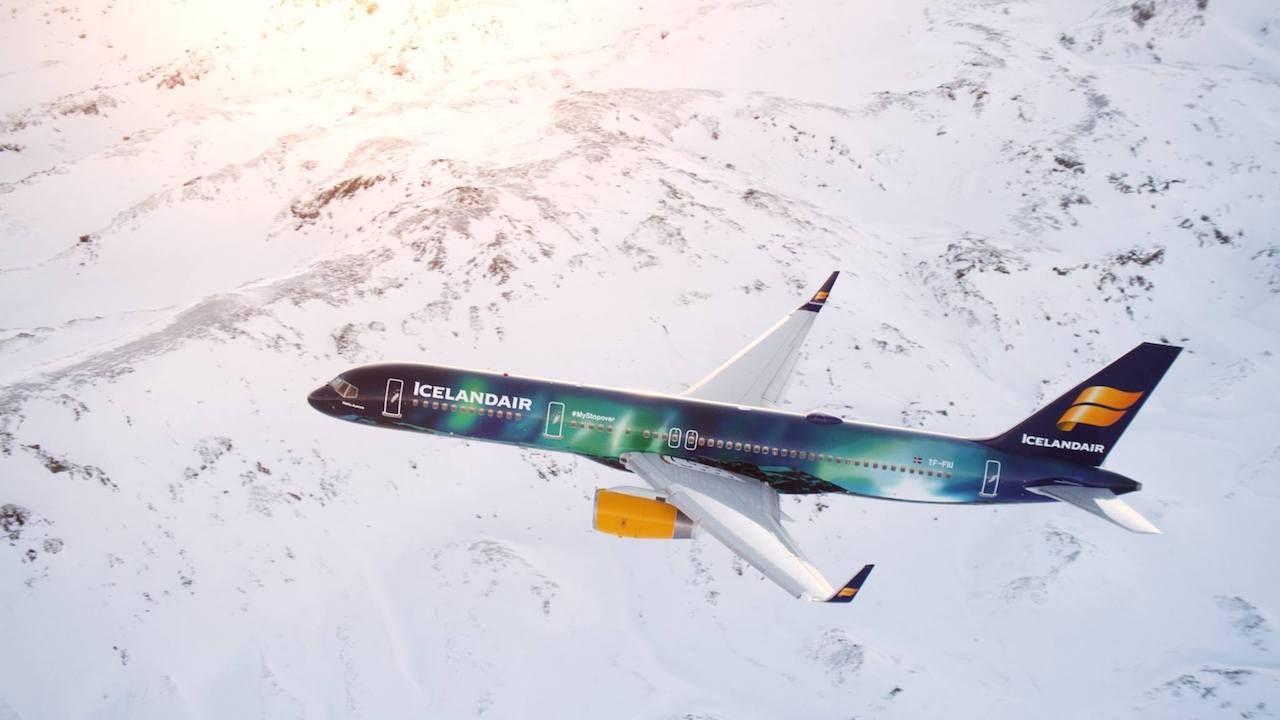 Icelandair decorated one of its airplane with a representation of the natural phenomenon all visitors to Iceland hope to see: the northern lights. The Hekla Aurora is a Boeing 757 wrapped in a dark blue and green livery that looks like the Icelandic skies when it is lit up by the aurora borealis. The northern-lights theme carries on inside the aircraft where special green lights have been fitted to the ceiling to give passengers the illusion that they are experiencing this celestial show. You can see the painting process and follow the Hekla Aurora around the world here. Icelandair also has a glacier-themed airplane, Vatnajökull, and, a few days ago, the airline announced a new special livery — a representation of the country’s flag on a 757’s fuselage to celebrate the 100th anniversary of Iceland’s independence and sovereignty. 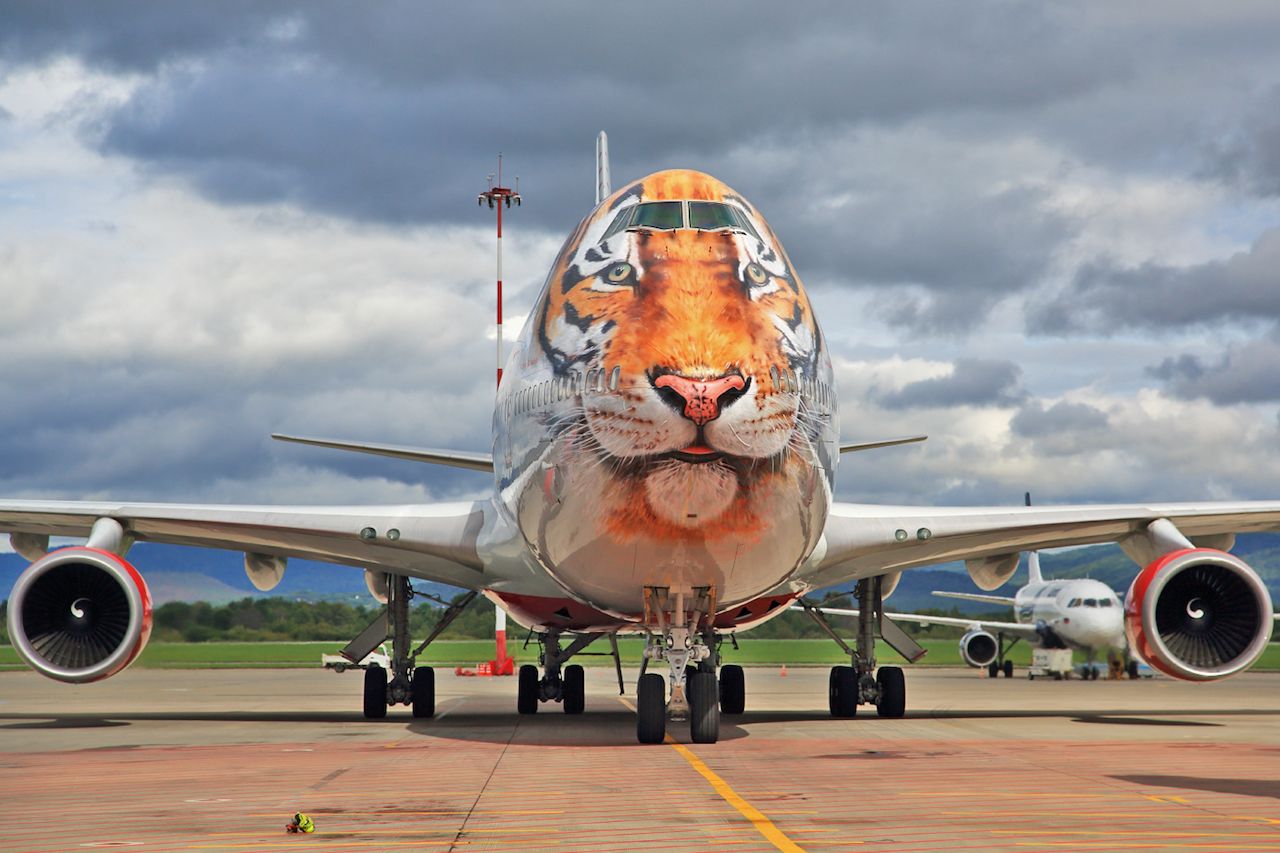 Like Emirates, the Russian carrier Rossiya Airlines devoted some of its airplanes to the cause of wildlife conservation. The nose of one of its Being 747s features the face of a beautiful Siberian tiger (also called Amur tiger), a species of big cat that is gravely endangered due to excessive hunting and poaching. According to WWF, “The subspecies was saved when Russia became the first country in the world to grant the tiger full protection”, so it is fitting that it is a Russian carrier that displays this beautiful animal on one of its aircrafts. After the great attention the tiger livery received, Rossiya Airlines decided to paint the nose of one of its Boeing 777s with another stunning big cat: a far-eastern leopard (also called Amur leopard). Far-eastern leopards are also indigenous of Russia and are critically endangered. Check out this video to see the painting process of the tiger’s face. 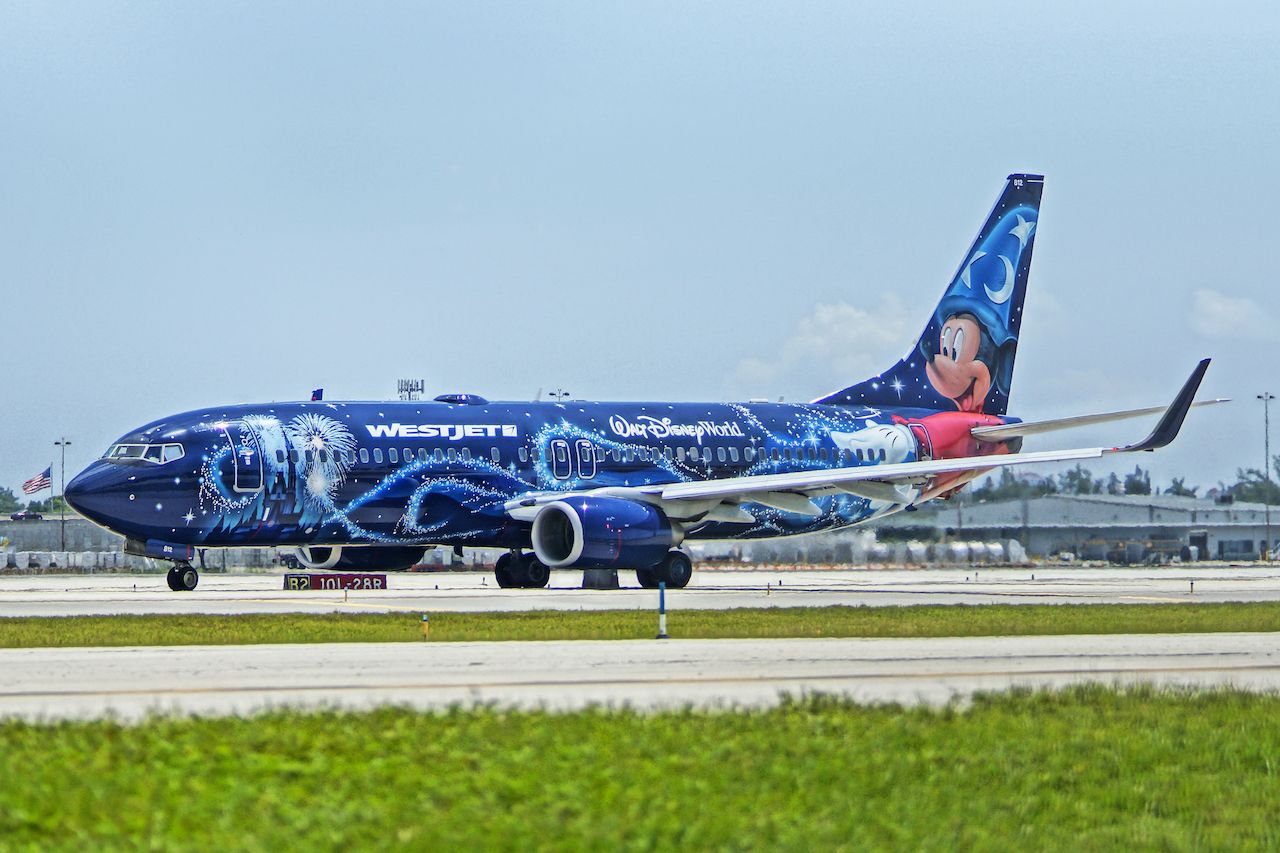 The Canadian carrier loves Disney so much that it has two Disney-themed Boeing 737s. In 2013, WestJet and Walt Disney Parks & Resorts (Canada) presented The Magic Plane, a stunning, Fantasia-themed aircraft that performed a very fitting inaugural flight from Calgary, AB to Orlando, FL, home of Disney World. In 2015, Westjet came out with The Disney Frozen-themed plane, a sparkly aircraft featuring Ana and Elsa, two of the most beloved Disney characters. The Disney Frozen-themed plane has a cold-to-warm design, from its tail displaying snowflakes to it nose showing a beach scene. According to WestJet, inside, “the aircraft has decals and headrest covers that mimic the cold-to-warm (back-to-front) theme on the outside of the aircraft.” 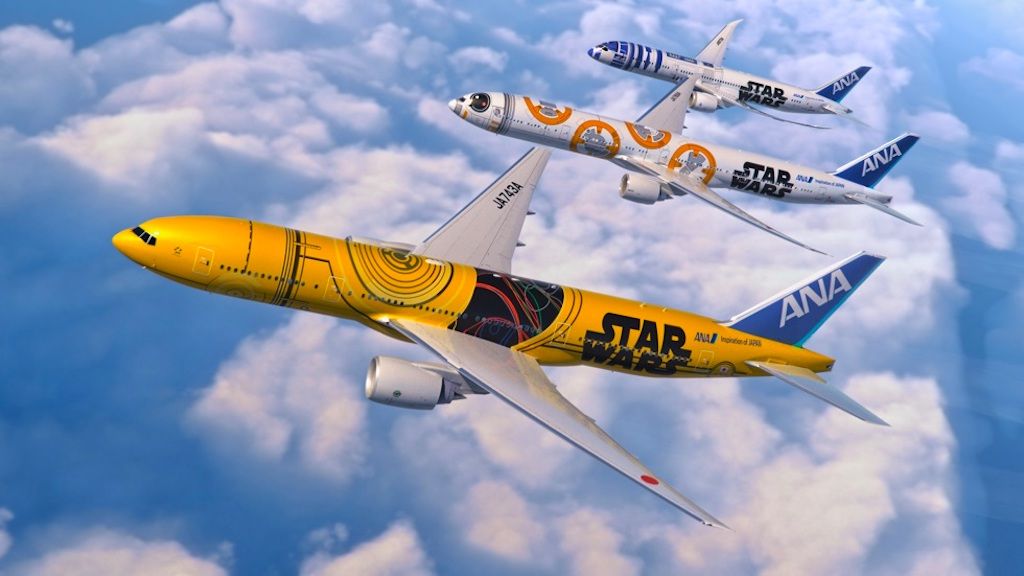 ANA (All Nippon Airways) has four Star Wars-themed aircrafts in its fleet: the STAR WARS JETS. From R2-D2 to BB-8 to C-3P0 and the STARWARS ANAJET, the Japanese airline is dedicated to please fans of the Star Wars franchise with some cool liveries. For the schedules/itineraries of each of these aircrafts, check out the ANA webpage here.

ANA also recently unveiled its new Airbus A380 liveries. Three airplanes flying the Tokyo-Honolulu service will be fitted with the FLYING HONU livery, a paint scheme featuring a turtle (“Honu” is the Hawaiian word for the green sea turtle) that comes in three different colors: blue, green, and orange.