Craning beneath a grove of giant sequoias may be the only way to comprehend the magnitude of their size. They’re the most massive trees on Earth, ranking not only among the tallest but also out-measuring the thickest. Those lucky enough to have been awed by the redwood species in person likely glimpsed them on the western slope of the Sierra Nevada, where the only native giant sequoias grow today. California is not the only place to admire the species, however. Much as they grew natively across the Northern Hemisphere millions of years ago, giant sequoias have been cultivated in countries around the world since the mid-19th century. Thousands of these cultivars exist across Europe. From nature reserves to grand estates, the United Kingdom to Romania, here are seven places to track down the tallest, widest, and oldest giant sequoias in Europe on your next trip to the Old Continent. 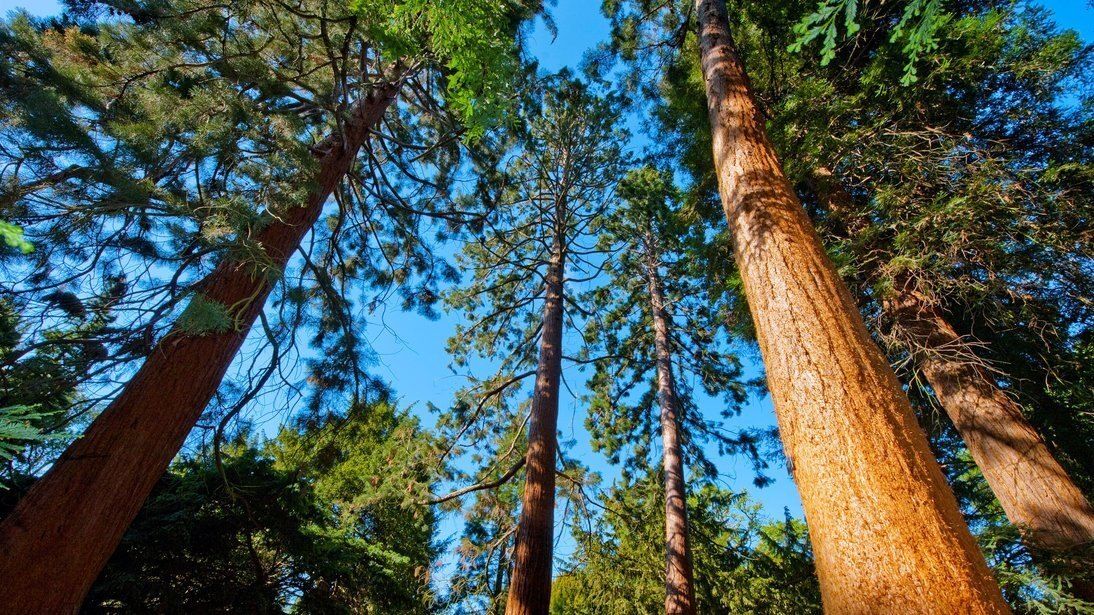 The first giant sequoia seeds arrived in England in 1853, first as a shipment to a British horticulturist from his California-based son and later in the custody of William Lobb, a plant collector for a nursery near Exeter who learned of the impressive species while visiting San Francisco. The nursery quickly found a market for the saplings that Lobb’s collections produced among the British elite. As a result, giant sequoias can be found on several estates across the country. Many, including Killerton, Sheffield Park, and Penrhyn Castle, are managed by the National Trust. Travelers can also see giant sequoias dating to the 1860s in southwest London at the Redwood Grove in the UNESCO-listed Royal Botanic Gardens, Kew. 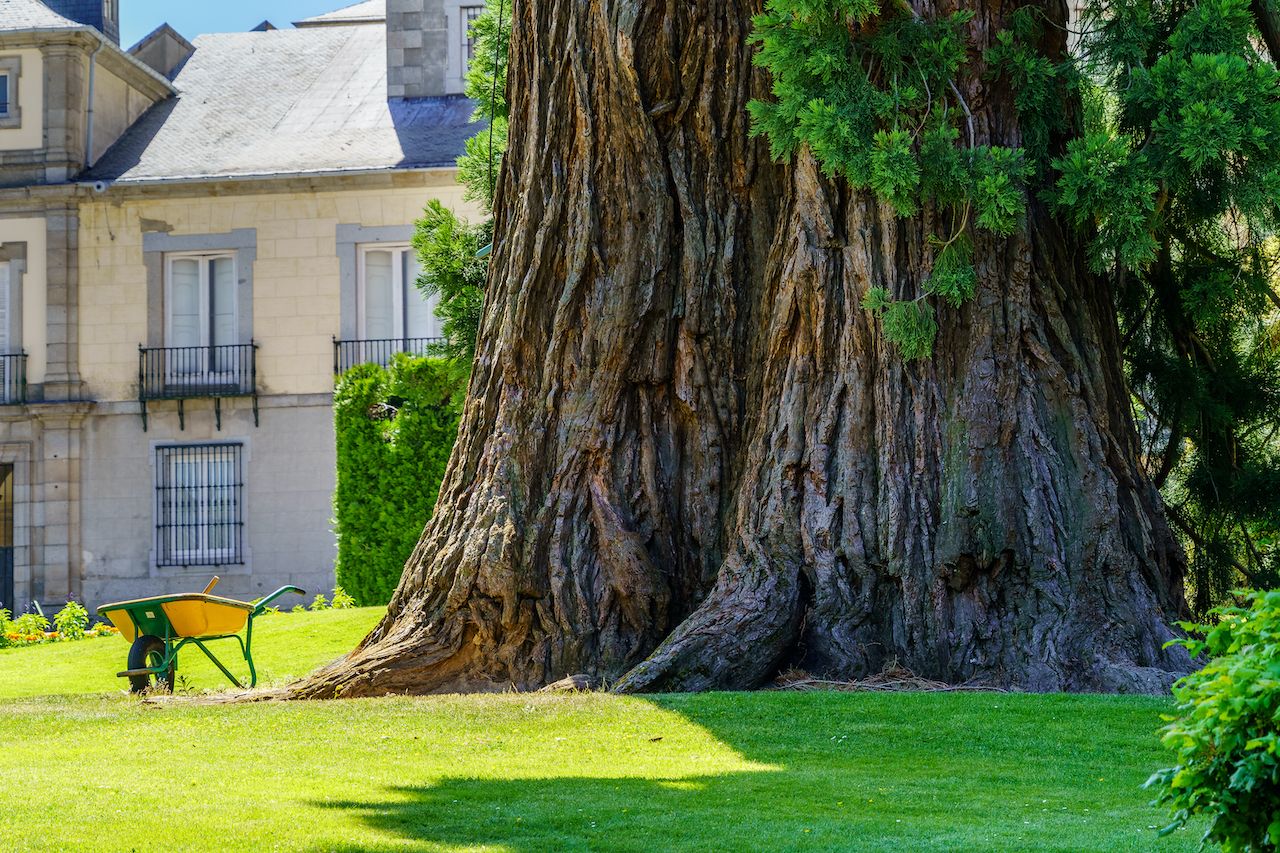 Roughly an hour northwest of Madrid in the town of San Ildefonso is an 18th-century, Versailles-style palace known as La Granja where Spanish monarchs used to summer. Outside the palace entrance is a pair of giant sequoias fittingly dubbed El Rey and La Raina, or “The King” and “The Queen.” Both grand botanical sentinels rise more than 100 feet, with El Rey standing taller than La Reina ever since the latter was struck by lightning in the 1990s. 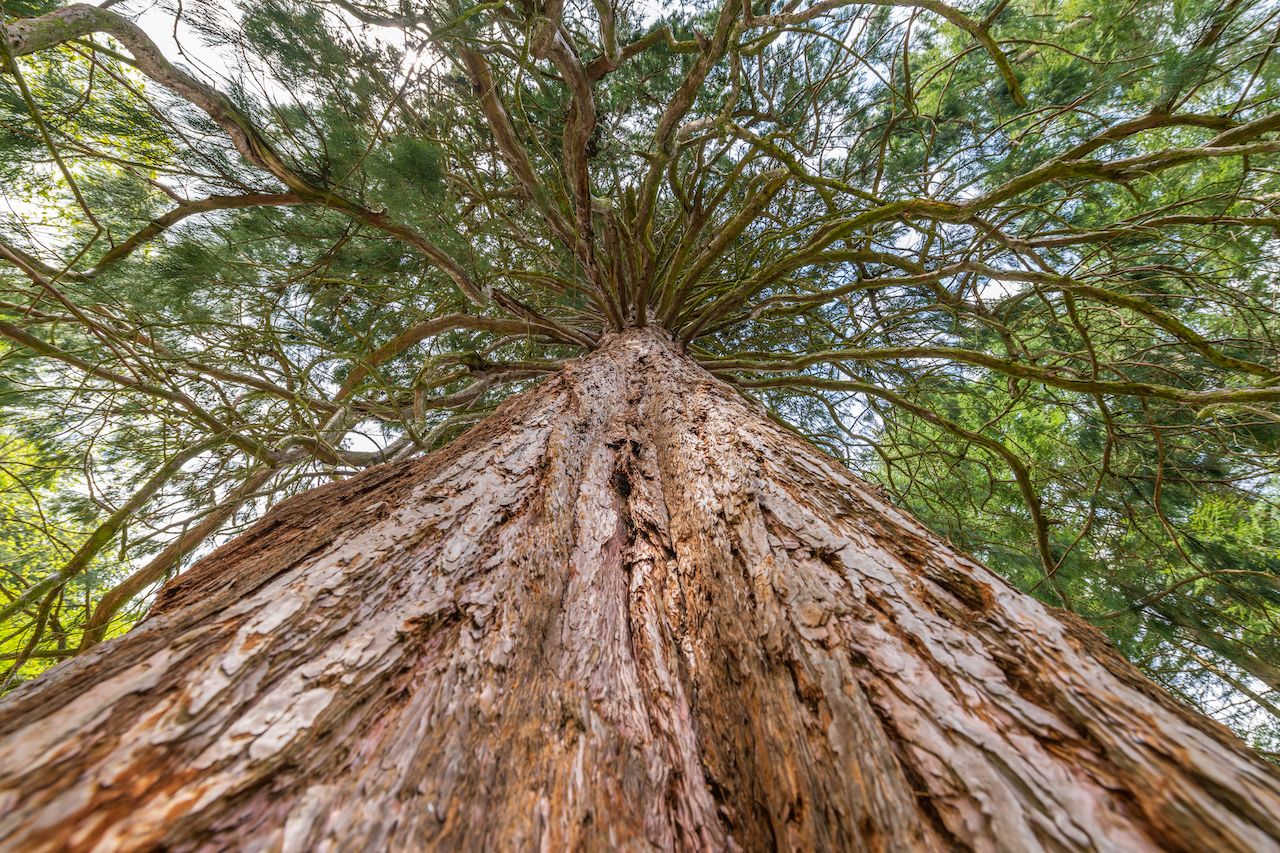 Outside of the United States, the tallest giant sequoia in the world lives in the state forest of Ribeauvillé, France, a commune at the base of the Vosges Mountains. It was planted in 1856 and clocked in at approximately 190 feet when it was measured in 2014. There are giant sequoias elsewhere in the range, as well, including near the towns of Vittel and Saint-Dié in the Vosges department and in the Arboretum de la Hutte in Ourche Valley. 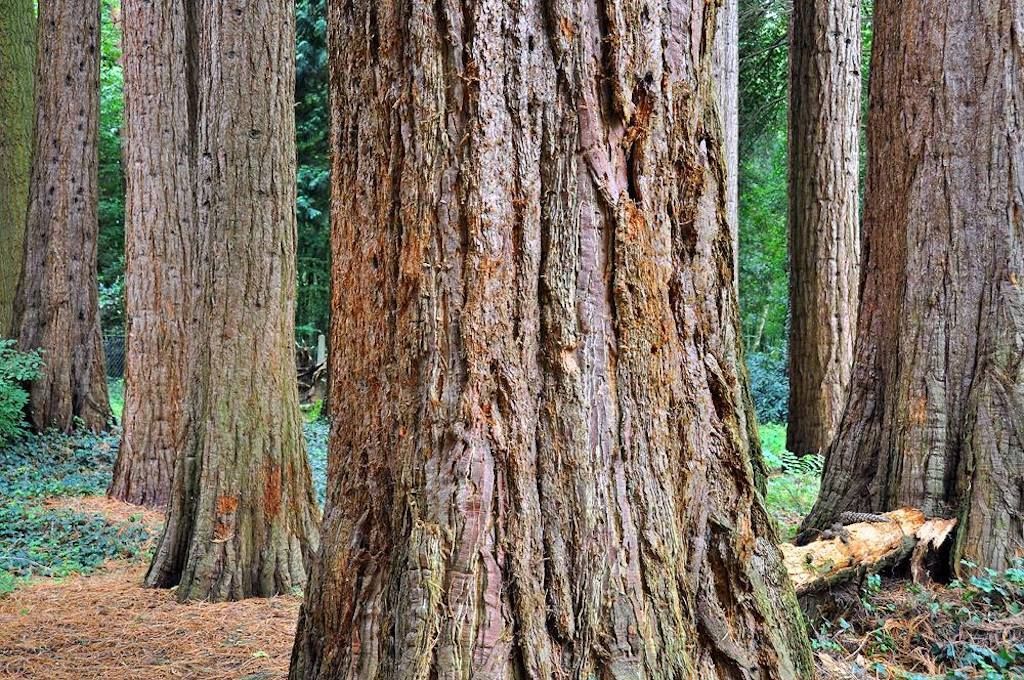 An arboretum and biological institute, the Kaldenkirchen Sequoia Farm is tucked away in the Kaldenkirchen Grenzwalk forest near the city of Nettetal in Germany’s Lower Rhine region. It was established in the mid-20th century by a pair of dendrologists who were eager to see if giant sequoias, which existed in Germany millennia ago, could thrive in the forest. They sourced seeds from Sequoia National Forest in California and tended 1,500 seedlings, alongside species such as the coast and dawn redwoods. Today, the sequoia farm is a popular attraction in the Maas-Schwalm-Nette nature reserve with more than 400 tree species on display.

The Benmore Botanic Garden in Argyll and Bute, Scotland, has an entire section dedicated to giant sequoias: Redwood Avenue. The 150-year-old trees were planted in 1863 shortly after an American named James Patrick bought the Benmore Estate and started working on the garden. Now, giant sequoias are among the first flora visitors see upon entering the site, which is managed by the Royal Botanic Garden Edinburgh. 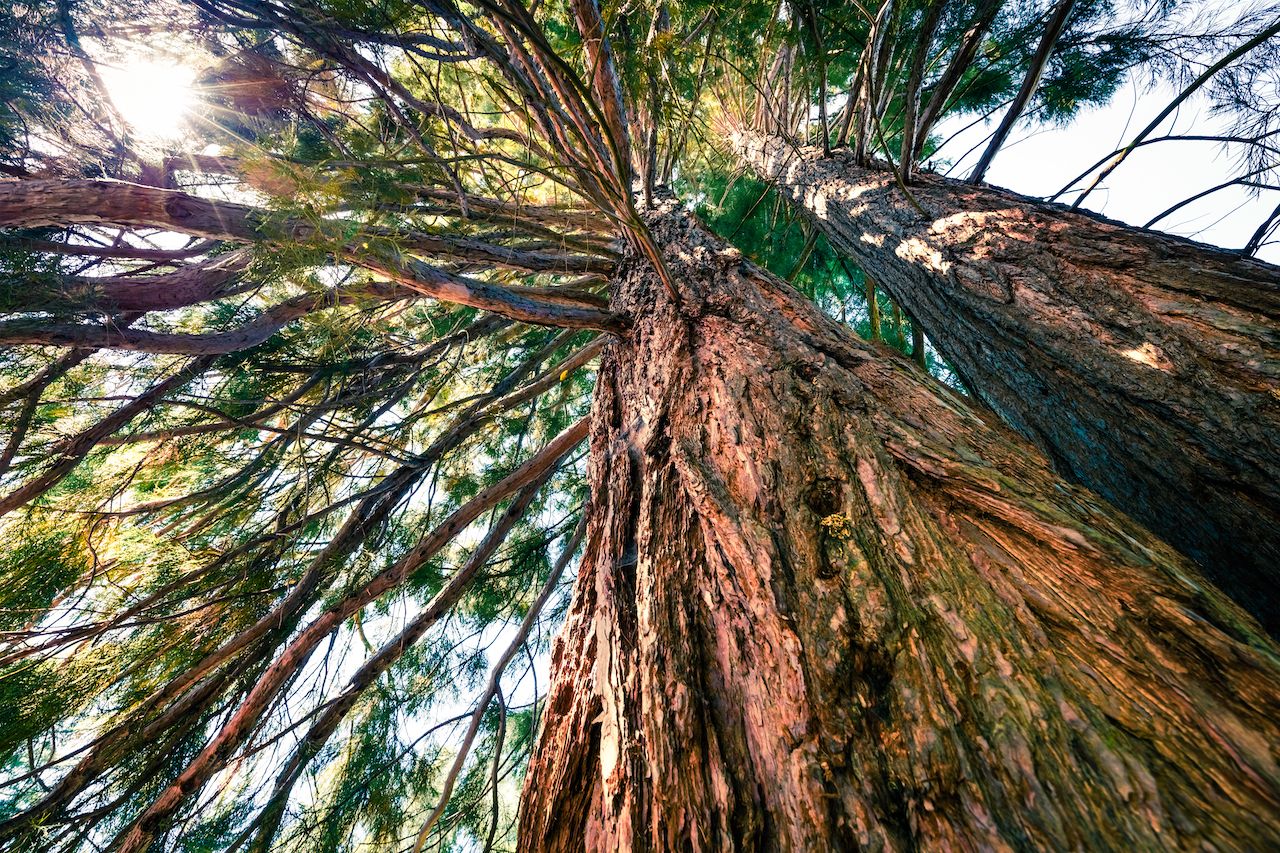 There are several giant sequoias in Romania, from the outskirts of Bucharest to Caraș-Severin near the Serbian border. Perhaps the most famous is located at the foot of the Vlădeasa Massif in Transylvania’s Carpathian Mountains near the villages of Rogojel and Săcuieu in Cluj County. It’s unclear how exactly the giant sequoia came to grow here: The most popular account traces it back to a Hungarian baron who introduced a variety of rare trees to the region while another attributes it to a landowner in the early 20th century. Other giant sequoias worth noting in Romania include a trio of trees in the city of Oradea and single specimens in the town of Baile Herculane in Cernei Valley and the village of Măderat in Arad County. 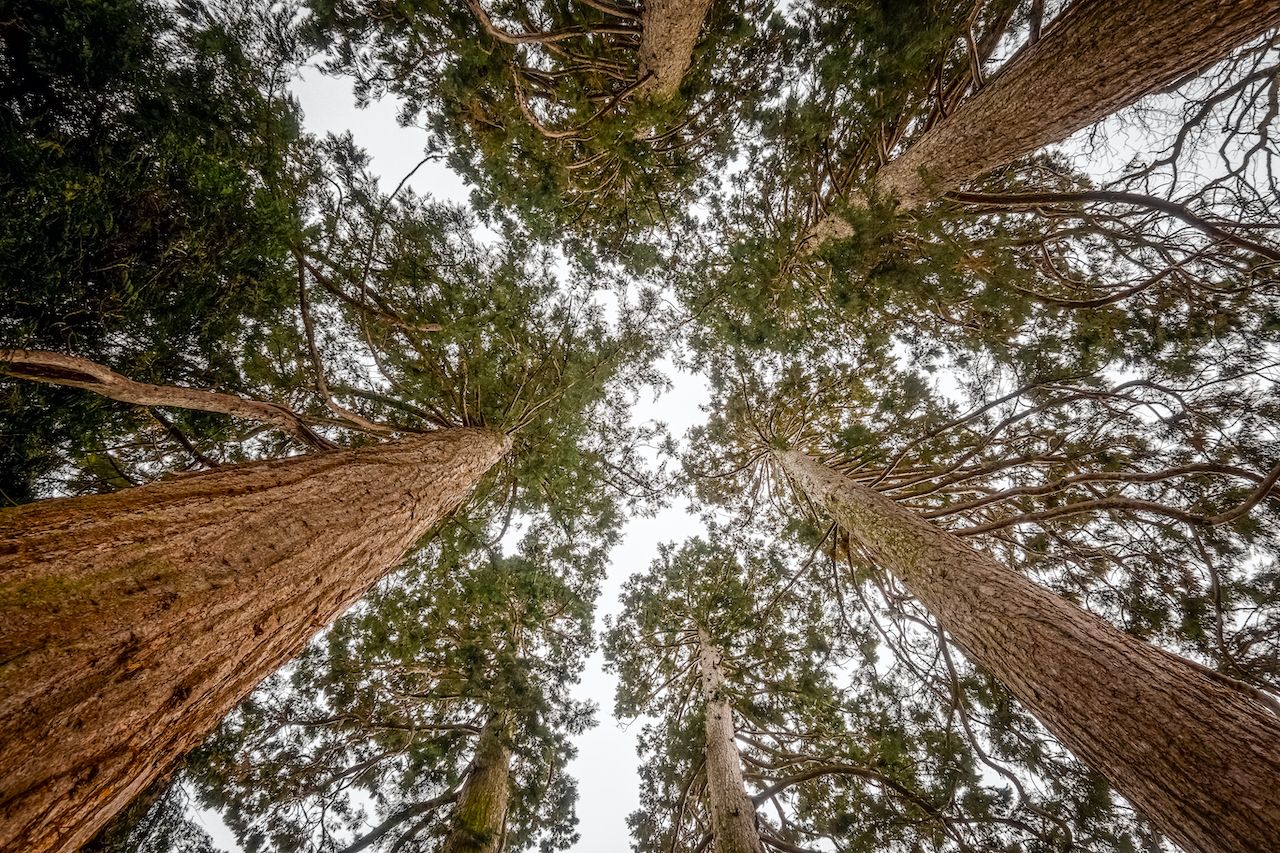 Geneva’s Jardin Anglais holds one of its most popular attractions: the iconic flower clock. Arguably just as impressive is the garden’s giant sequoia. It’s not the only specimen in Geneva, however. Some estimates say there are as many as 1,000 sequoias around the city and its namesake lake today. Elsewhere in Switzerland, a giant sequoia rises over Oberrohrdorf’s city center and gets decorated with thousands of lights every Christmas, while others have been reported in Zurich and the municipalities of Kreuzlingen, Winterthur, and Nyon.

6 beautiful frozen waterfalls in Montana to see this winter
The ultimate guide to all 2022 national park permits in the US for hiking, backpacking, and more
This European country has 6,000 grizzly bears. Here’s where to see them up close
5 states with the most scenic and laid-back nude beaches
The 9 cutest baby animals born in 2021