The Iceman Cometh Challenge, a 30-mile race often undertaken in a blizzard, put Traverse City’s bike scene on the map — the insanity of a ride in gusting winds on snow-covered trails will tend to do that. But now the city is getting attention (and attracting cyclists) for more than just the extreme. Here, you’ll also find leisurely pedals past orchards and bays in one of the state’s top wine-growing regions, mountain bike trails crisscrossing forested hills, and regular ride events through a bike-friendly town and its surrounding landscapes.

Here’s how to get the most out of this city overlooking two Lake Michigan bays — on two wheels.

1. Bike to galleries and lunch, then catch the bus back. 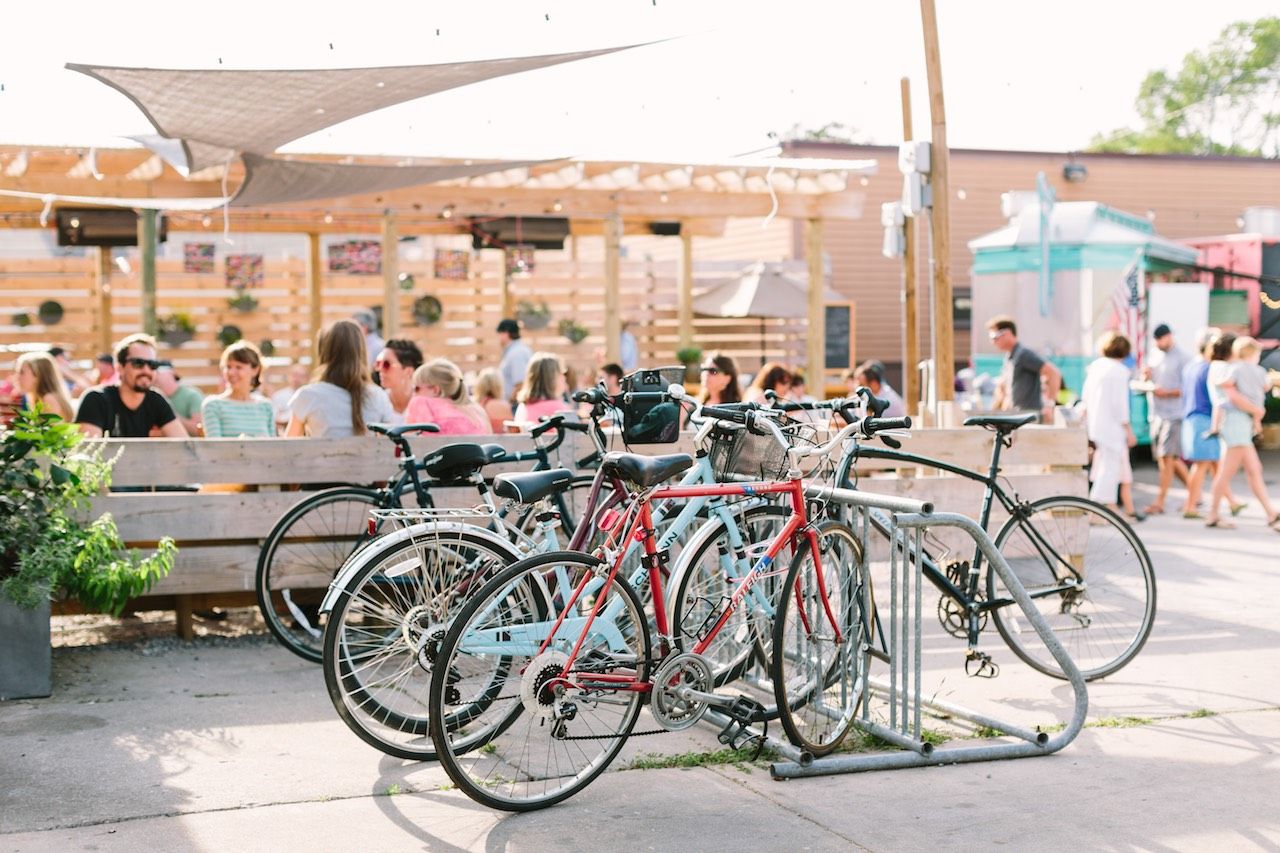 Venture out 17 or so miles on the shady, paved Leelanau Trail to the quiet town of Suttons Bay, and your work is done. Grab lunch at Martha’s Leelanau Table, sample sorbet made from fresh local fruit at Little Bee’s Italian Ice, shop at the local boutiques and galleries, and then catch the Bike-n-Ride bus back. Pretty simple — and great — stuff. That’s how Traverse City rolls.

Need a snack sooner? The DeYoung forest garden two miles north of Traverse City lets you stop and munch as much as you like on plums, persimmons, and wild blueberries. And if you feel like lingering longer at the end of your ride, the Bike-n-Ride makes multiple stops, including at the sandy Suttons Bay Beach.

2. Talk your way through town (to tacos). 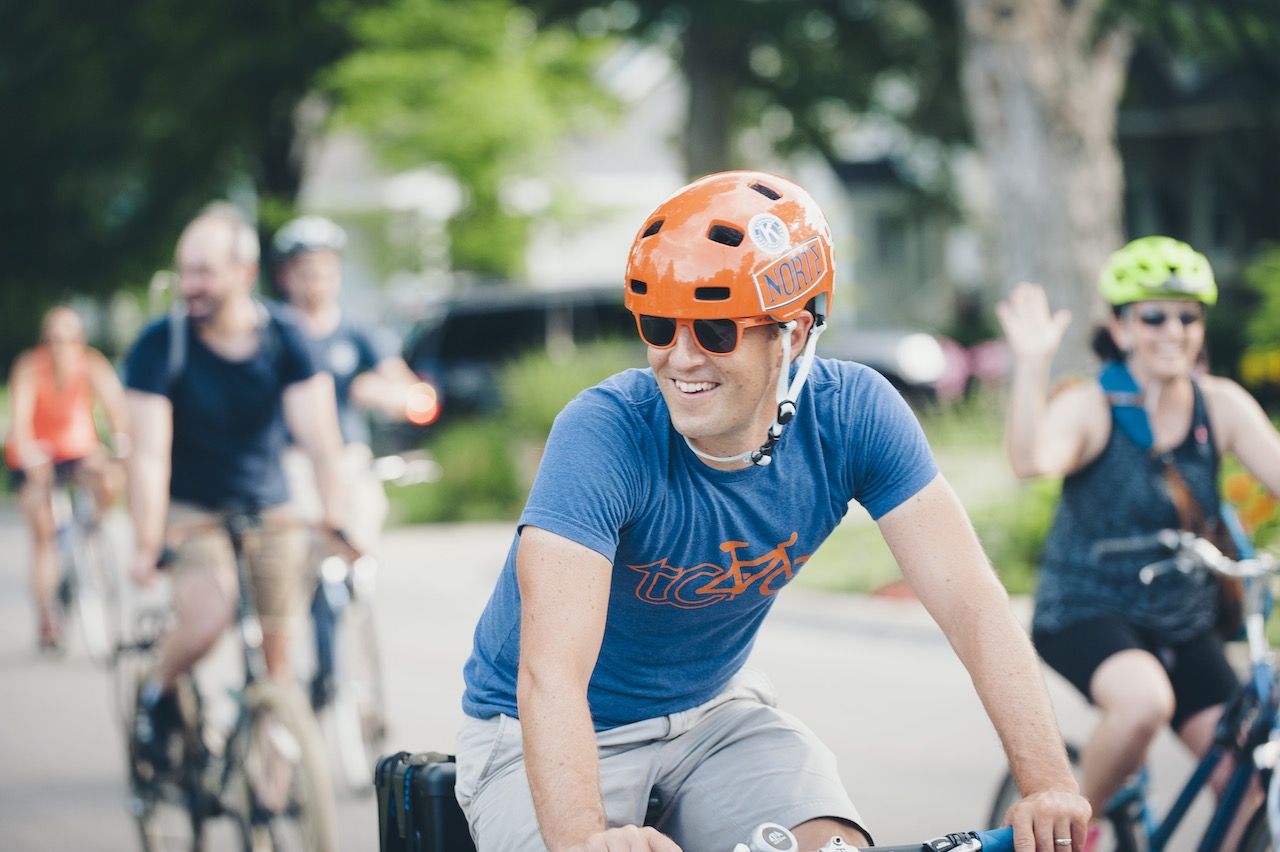 Locals call it “a ride with chit-chats” — the weekly group glide (in the summer) from pretty F&M Park down what’s curiously known as “Silk Stocking Row.” Victorian mansions built by lumber barons line these wide streets, and in the late 1800s only those with silk stockings could afford to live in them.

Things have changed a little since then. TC Rides, a side project of the local nonprofit Norte, started as a way to encourage cycling for all, and that’s exactly who shows up after work on Wednesdays to ride the row: people of all ages on bikes of all ages, from plasma and titanium beauties to leftovers from Goodwill (also beauties in their own way).

And the journey isn’t without a destination. The ride ends with a culinary feast…or at least a collective of food trucks that serve up a mean fresh-squeezed margarita. Little Fleet owners turned a former parking lot into a community gathering place, and $1 from each Korean taco or sushi roll sold here benefits local cycling initiatives. 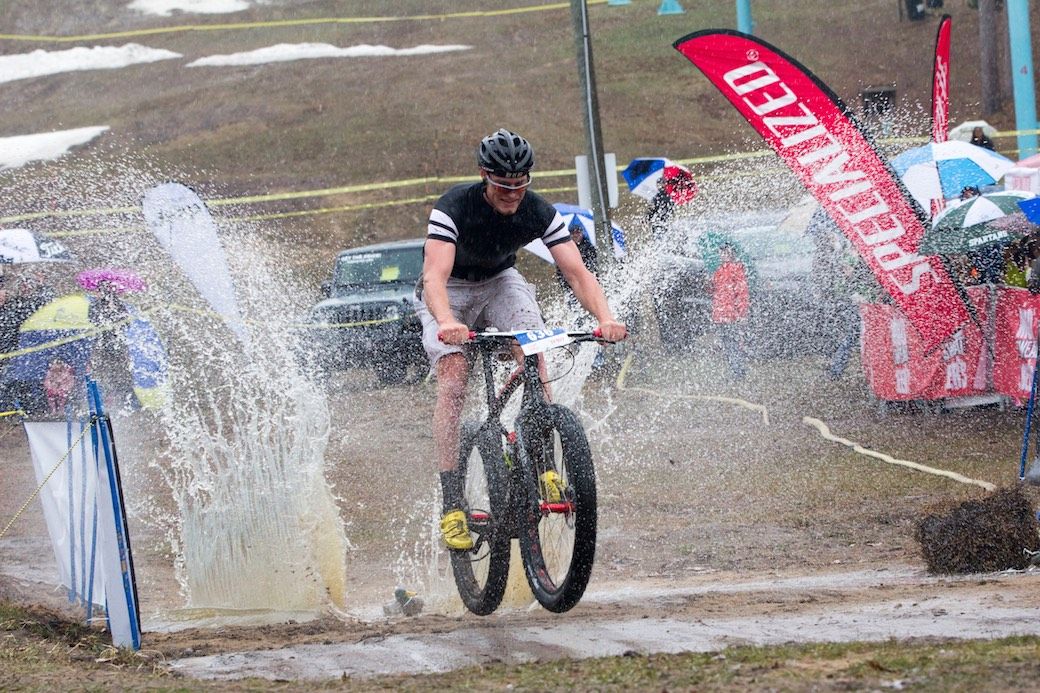 That’s literally the name of this awesome Fat Tire Fest and Mountain Bike Race. It’s the local headline act for May Bike Month and the warm-weather cycling season. The race takes in trails surrounding the community-run ski hill, Mt. Holiday, and ends with the adrenaline rush of a ski-style slalom — down the ski hill — to the mud bath of a finish. There’s even a family-friendly component: a “Root Beer” class (an easy, under-half-mile trail for younger kids). Then there’s the 22-mile “Stout,” the 10-mile “Pale Ale,” and the not-quite-two-mile “Ginger Ale” route…

There are more feel-good components, too, like what’s fresh from the wood-fired stove at Right Brain Brewery, notable for their “culinary brews” such Cherry Pie Whole, which tastes something like its namesake, crust and all. Proceeds support Mt. Holiday, which offers free equipment, lessons, and rentals for kids who qualify for the local free lunch program. 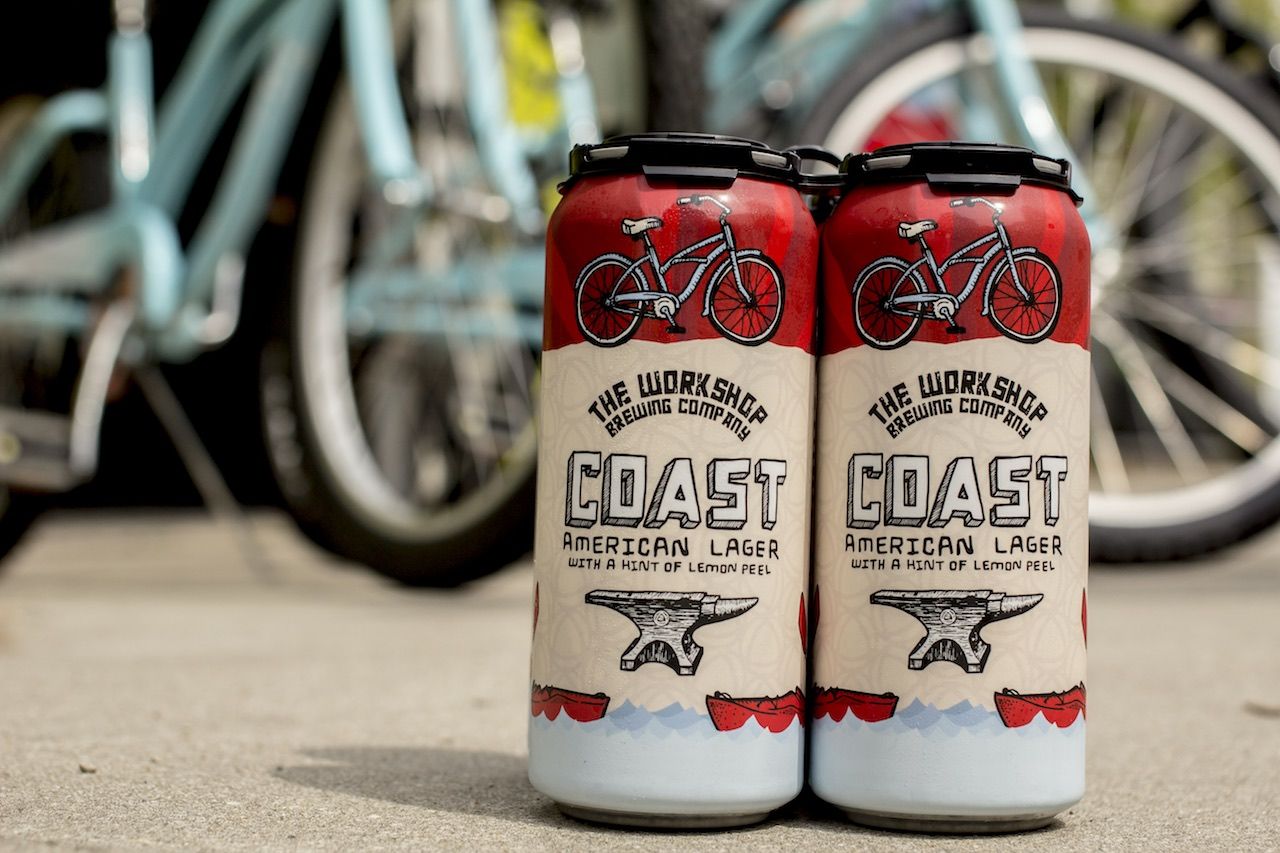 People already know Traverse City is a great craft beer destination. Draft Magazine named it one of three emerging beer towns, and Travel Channel recognized it as one of the top seven beer destinations in the country. Then a local entrepreneur happened to notice that most of the favorite microbreweries were located on a bike and water trail, and so Kayak, Bike, and Brew was born.

Stop into the Warehouse District base to catch any of the multiple daily trips that now launch with a cycling leg. You’ll pedal toward a microbrewery also known for its wood-fired pizza and live music, then paddle on Boardman Lake and down the Boardman River.

5. Bike between the vines… 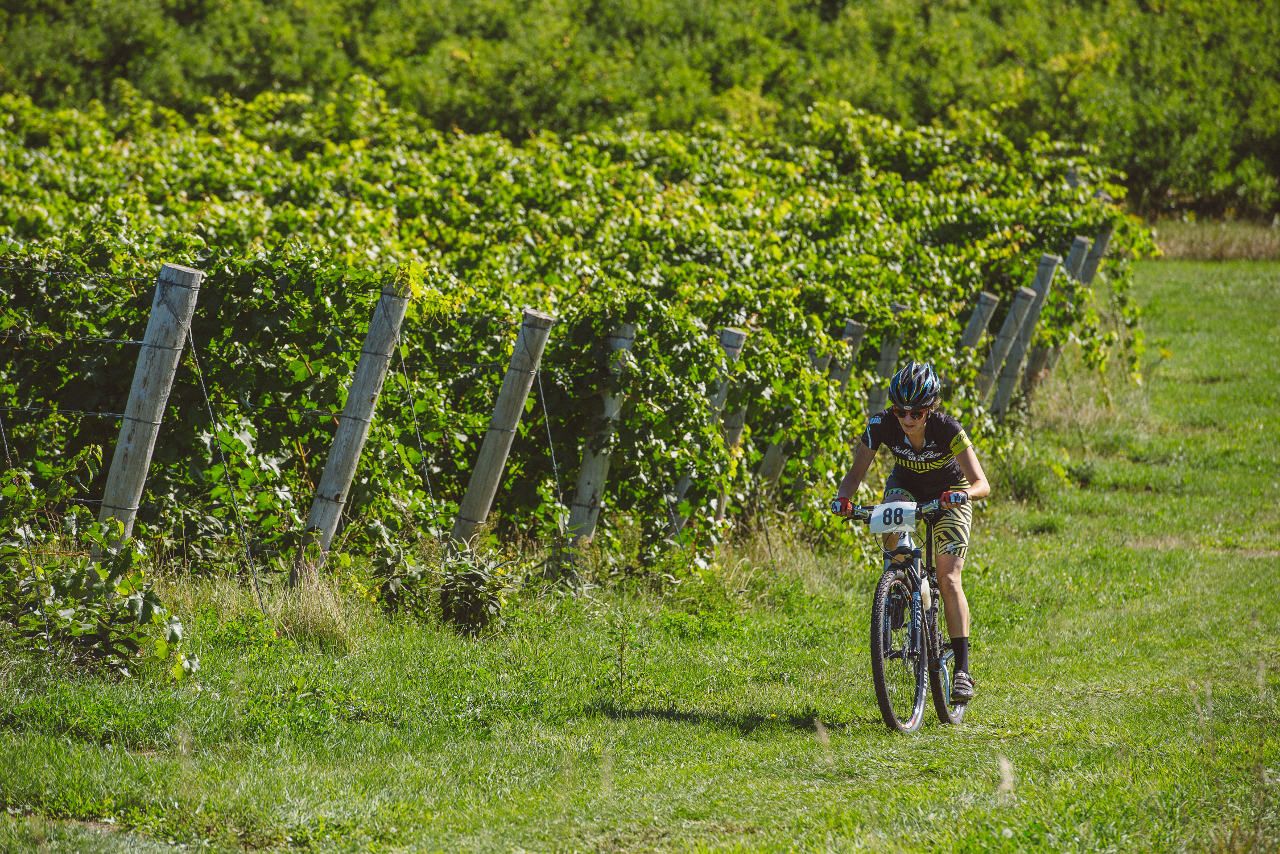 Or skip the kayaking. Grand Traverse Bike Tours offers bike-to-brewery tours with a few miles of cycling between stops. There are winery options, too, which let you choose from a mountain bike trek between grapevines and a self-guided winery tour down the Leelanau Trail. Wineries like recreation-friendly 45 North even keep bike pumps and tools on hand.

6. …and along the peninsulas of vineyards, bays, and blossoms. 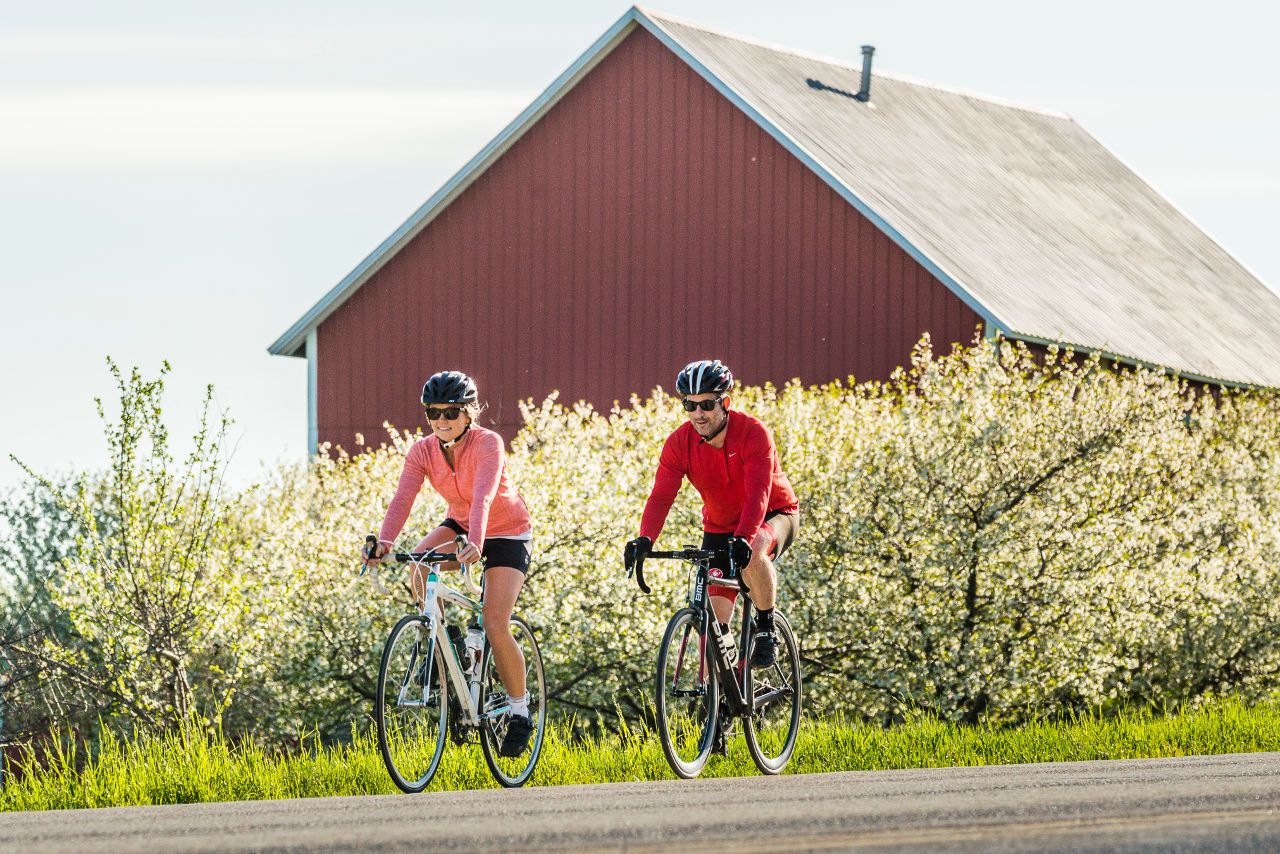 The Cherry Capital Cycling Club’s most popular ride is a weekly trip out on the Old Mission Peninsula. It runs some 15 or so miles from town to the peninsula’s tip and another 15 back over gradual hills that lead to views of bays in both directions. Try to be here in May — that’s when you’ll be riding alongside cherry blossoms.

It’s a relatively mellow ride, what with its wide shoulders and generally cautious drivers. At the peninsula’s end, you can explore a lighthouse that sits on the 45th Parallel, where a marker designates the spot halfway between the North Pole and the Equator. 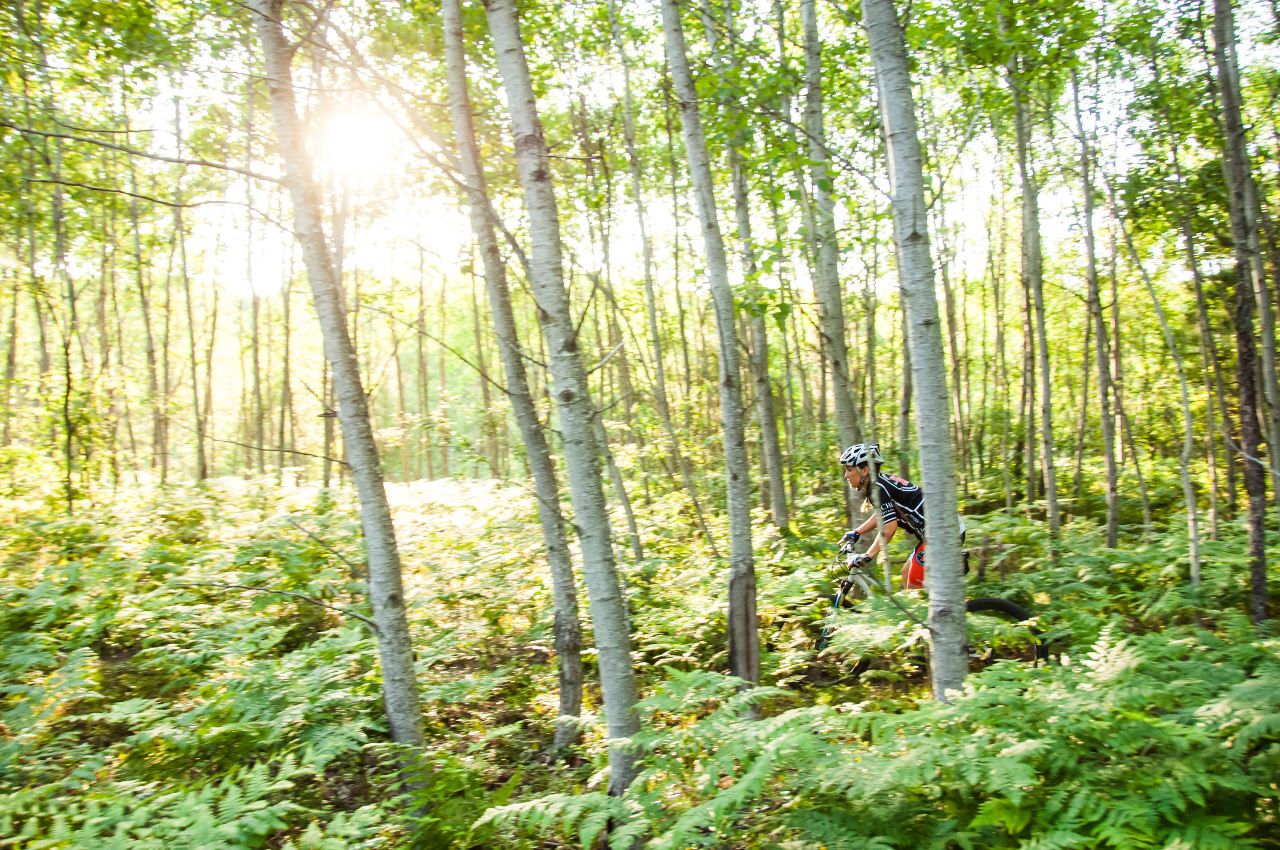 Nature and well-designed thrills combine in nearby Bellaire along the Glacial Hills Pathway, 30 miles of trails in a preserve of forest, wildflowers, and rare birds — and switchbacks — that’s managed by the regional land conservancy. The outside loops (with names like Never, Never Land and Holy Grain) are especially revered, but most come for the flow and the fact that the power of the brief downhills carries you into the following ups.

The VASA Pathway is another mountain biking favorite, with options for 3K, 5K, 10K, and 25K loops. It’s close to town but so forested it feels far from civilization.

Take note, though — the region’s beauty can be almost too distracting. One local cyclist, Steve Kershner, who has seen hawks, owl, deer, and even those tasty morel mushrooms while on popular pathways like Glacial Hills, found out for himself the perils of the beauty here. As he put it, he “learned the hard way that looking off the trail too much is not good!”

8. And remember: May Bike Month is the best time to celebrate it all. 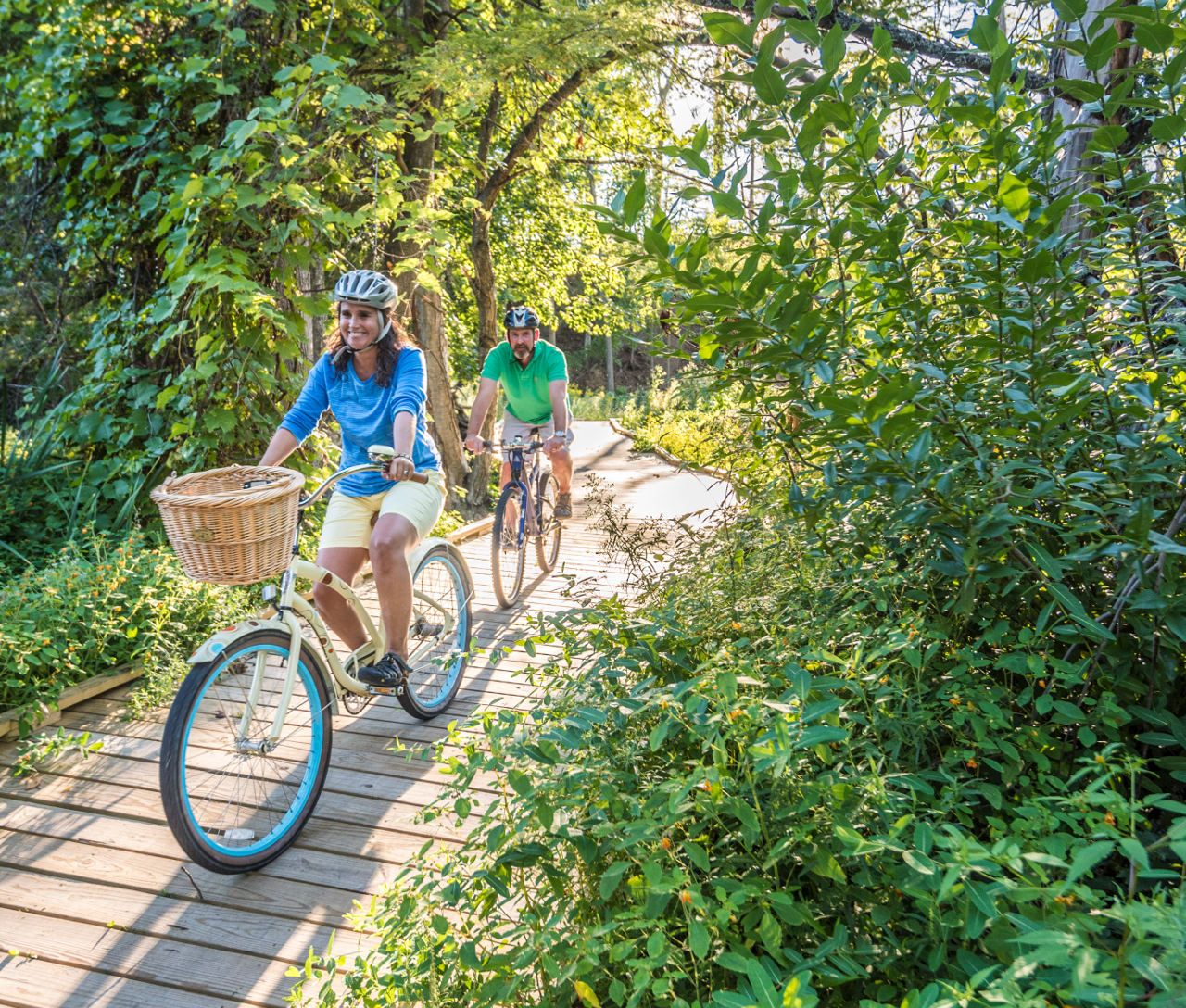 Visit in May and you’ll catch local programs that offer free helmets to early riders and even loaner bikes that work like a book lending library. Check one out until you outgrow it, then check it back in for another.

There’s a group ride to a popular annual barbecue at the college, a “take a mom mountain biking” day, a kickoff of neighborhood bike trains that replace drives to school, and even a farmers market valet program that runs all year. Take your bike to the market, hand it over to the valet, and shop as long as you want for produce, flowers, and treats. Just don’t forget to bring your basket.

This post is proudly produced in partnership with Traverse City Tourism.
Tagged
Cycling Insider Guides Traverse City, MI, United States
What did you think of this story?
Meh
Good
Awesome

10 Things You'll Only Understand if You've Been To Traverse City, Michigan