WASHINGTON HAS IT ALL: shrub-steppe landscape in the east, forested mountains, rugged coastline with big archipelagos and bays, sinuous river valleys. The State Parks might not be as well known to visitors as the Olympic Peninsula, but they’re more than worth visiting.

The small Palouse Falls State Park is in the south-east corner of the state, away from major routes. For this reason, it is not the most popular of the State’s parks yet it offers some of Washington’s most beautiful views. The Palouse River created a canyon along its sweeping course. At one point, the river suddenly drops 198 feet in an arena-shaped formation. The falls are hidden from the upriver course, right behind a sharp 90° right turn. The waterfall falls in a gentle arc and the river continues in the now deeper canyon. The canyon has tall steps of white and brownish rock exposing millennia of geological formations. Their color alternates with the shrubs’ greens.

Dry Falls Heritage AreaCoulee City, United StatesI’m looking at the site of the biggest waterfalls to ever grace our planet. Today, there’s no water in the aptly named Dry Falls, but geologists have used the area to prove that the existence of a global cataclysm during the last ice-age (perhaps the source of all the flood myths around the world). It’s definitely the source of a fantastic road trip into Washington State. #roadtrip #washington #waterfalls

The Sun Lakes-Dry Falls State Park formed thousands of years ago by periodic cataclysmic floods called Missoula Floods. The result is a unique natural area with a varied landscape and teeming wildlife. South of the Colville Reservation, the Park’s dramatic complex is a prime example of shrub-steppe habitat, irregular lakes and ever-changing levels of terrain.

The Park is commonly known for the Deception Pass Bridge (listed in the National Register of Historic Places) one of the most photographed scenic spots of the Pacific Northwest area. Located on both sides of a strait in the north of Puget Sound, the Pass offers a wide variety of scenery: two lakes, beaches, green cliffs falling into the ocean and trees everywhere. Although it is one of the most visited locations in Washington, you can find yourself alone while looking at the sunset along the 38 miles of trails. It’s family friendly park that is worth visiting any time of day because you can hike, sit, play or just enjoy the light.

Cape Disappointment is a very small State Park at the very south-western most tip of the state, at the mouth of the Columbia River on the north side (opposite to Fort Stevens). It is one of the foggiest places in the USA, with about 106 days a year with fog. Although it is not a secluded area, the fog, the coastline dotted with big driftwood, and the ever-changing Pacific Northwest weather create an eerie landscape offering anything from beautiful sunset views to wet, wind-swept days. They couldn’t have built a lighthouse in a more needed spot.

Leadbetter Point State ParkOysterville, United StatesCloudy sky but beautiful day. The weather actually fit the atmosphere. It was quiet and nice, nobody around.
And the water was not cold!
#Washington #USA #statepark #parks

The 30-miles long Long Beach Peninsula starts from the mouth of the Columbia River (and Cape Disappointment) going north and ends with Leadbetter Point State Park. The Park covers the tip of the peninsula. Stand on its very tip looking south. You’ll see the wild Pacific Ocean on the right and the calm Willapa Bay on the left. You’ll see wide sand beaches on the right, supposedly the longest in the USA with a 28-mile stretch, and green and brown salt marshes on the left. The water of the bay was actually not cold when I jumped in it on a cloudy October day.

This State Park is ideal for a short break in your day/road trip if you are North-east of Yakama Indian Reservation and on the shores of the Columbia River when it becomes the Wanapum Lake. In the Gingko Petrified Forest you’ll see how minerals in lava replaced organic matter in trees eras ago, thus creating a landscape with sculptures that are recognizable and yet are out of our usual visual imagery. The 3-mile loop, the Trees of Stone Interpretive Trail, is short, but you’ll work hard on some steep sections. Make sure you have a water bottle and watch your footing. 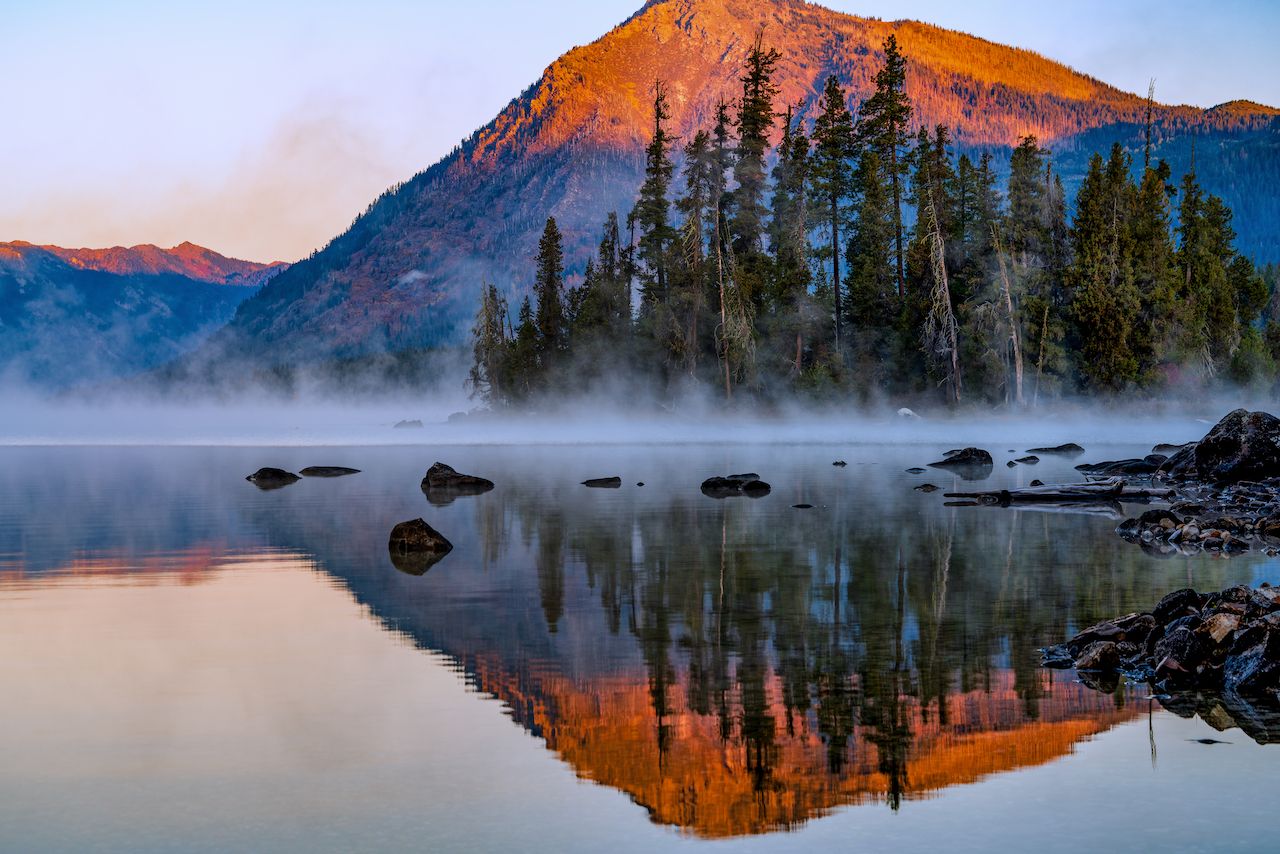 Located within the Okanogan-Wenatchee National Forest along the eastern slopes of the Cascade Range, the Wenatchee State Park is a Pacific Northwest example of pristine natural beauty. The glacier — and precipitation-fed waters are clear and calm and mirror-like, often reflecting the surrounding forests. High mountain-peaks are all around the lake, especially Dirtyface Mountain whose top is 4,000 feet above the lake level. It isn’t difficult to find a secluded spot, but teeming wildlife also means presence of bears, wolves and cougars. Be responsible and pay attention to natural dangers.

Lime Kiln State Park is located on the western shore of the San Juan island of the San Juan Islands archipelago. Reach the island, via ferry to have the experience of the views and of the silence of the archipelago. The waters might be windy but are always calm. Although it’s a well-known destination, the straits are surprisingly not trafficked. Once at the Park, you’ll simply be in one of the world’s best locations for whale-watching from land. The 1919 lighthouse guards the Haro Strait and is directly in front of Victoria, BC, which you might see on the horizon on a clear day.

Tagged
National Parks Washington, United States
What did you think of this story?
Meh
Good
Awesome

Pitch Your Tent at These 10 Rad West Coast BLM Camping Spots
The 8 Best Rivers in Washington State for Salmon Fishing
Washington Has More Waterfalls Than Any Other State. These Are the 9 You Don’t Want To Miss.
The 7 Best Beaches for Clamming in Washington State