For many, Russia is a place shrouded in mystery. The language, the history, the land, the gorgeous architecture — they all seem to be oddly indecipherable, piquing the curiosity of travelers. But, this fascination for the country that takes up more than one-eighth of the planet’s dry surface, should not be limited to just Moscow, Saint Petersburg, and the Trans-Siberian Railway. Here are nine amazing UNESCO World Heritage sites in Russia that will take you beyond the tourist trail and into the deepest, most-isolated, and incredibly beautiful confines of the Motherland. 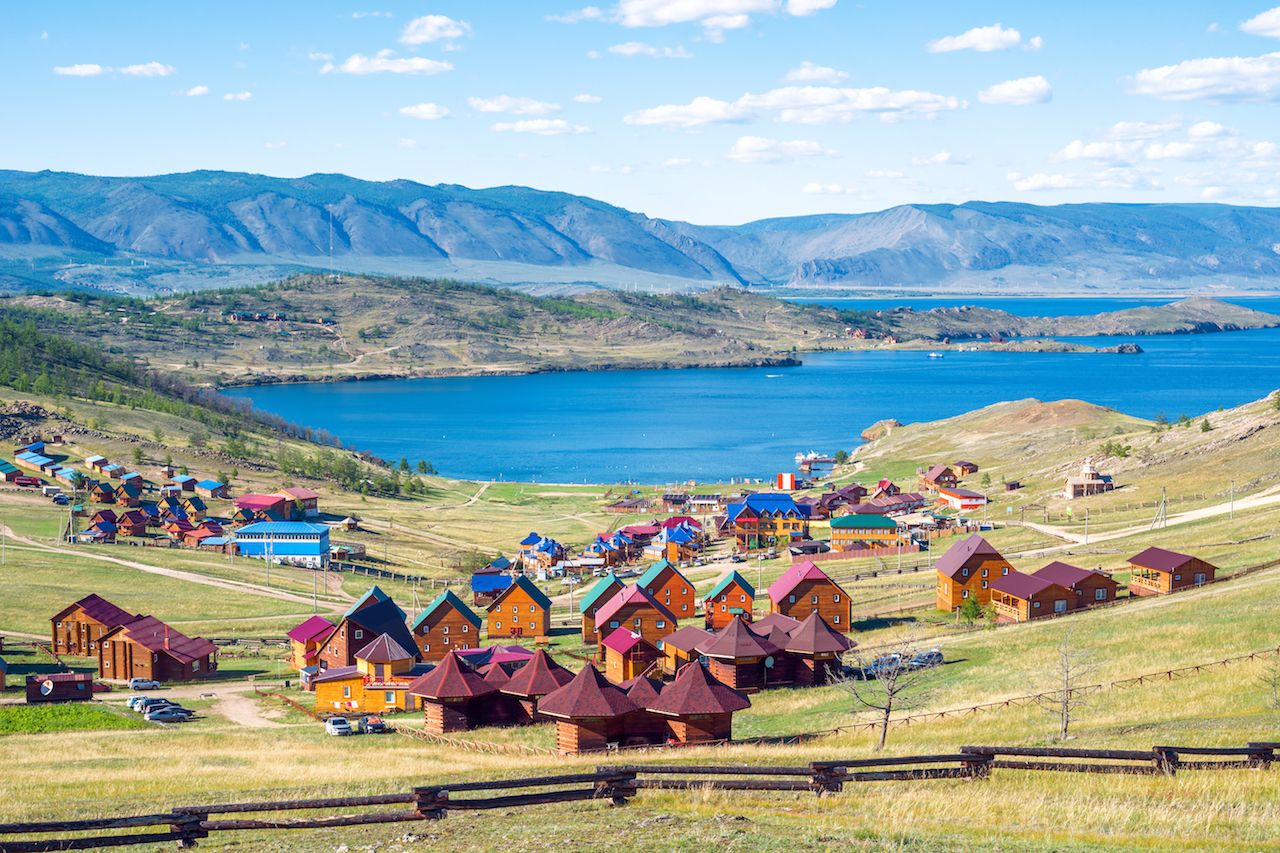 Lake Baikal, located in the south of Siberia, is more than meets the eye. Containing more water than all of the North American Great Lakes combined, Baikal is the oldest, largest, and deepest freshwater lake in the world, holding about one-fifth of all the unfrozen freshwater supply of the planet. It’s also considered to be one of the world’s cleanest.

Formed about 30 million years ago, Lake Baikal is home to thousands of unique species of endemic flora and fauna, like the only freshwater seals, nerpas. The lake’s southern and eastern coasts are also inhabited by the indigenous Buryat people.

Lake Baikal a popular tourist destination in both summer and winter because it’s easily accessible from Irkutsk, a major stop on the Trans-Siberian Railway. 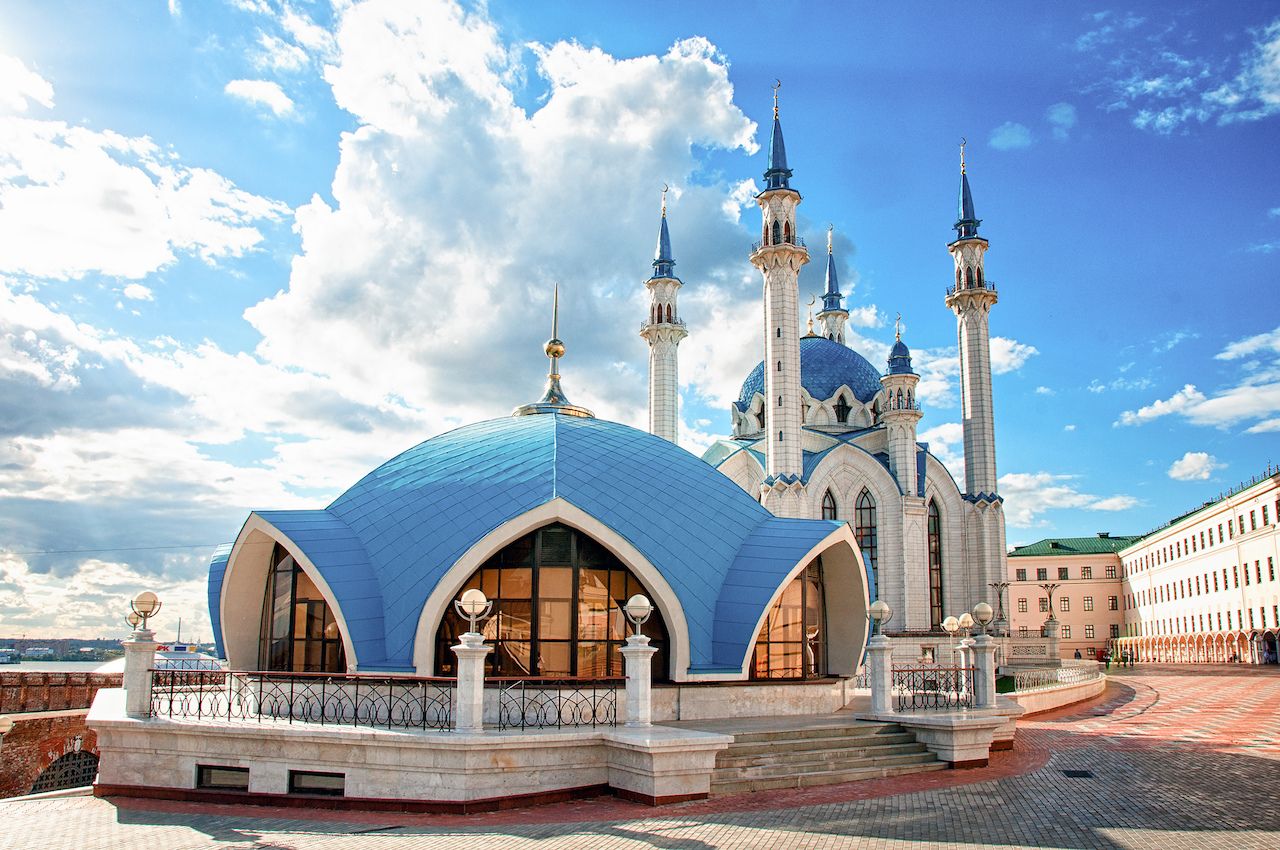 There’s more than one Kremlin in Russia. The chief citadel of the ancient land of Tatarstan, the Kazan Kremlin isn’t built of red brick like its counterpart in Moscow, but of white stone. Founded in the 10th century by Kazan khans, along with the city of Kazan, it was later conquered by the Golden Horde and eventually destroyed and rebuilt by Ivan the Terrible in the 16th century.

The Kremlin itself is an impressive architectural complex that consists of many religious and administrative buildings — for example, the Kul Sharif Mosque, as shown in the photo above — enclosed by a fortress wall with 13 towers that have different shapes and purposes.

With its history spanning the millennia, it was both the stronghold of Orthodox Christianity and the northwestern limit of the spread of Islam, and nowadays the citadel represents the blend of time and culture in the center of Kazan. 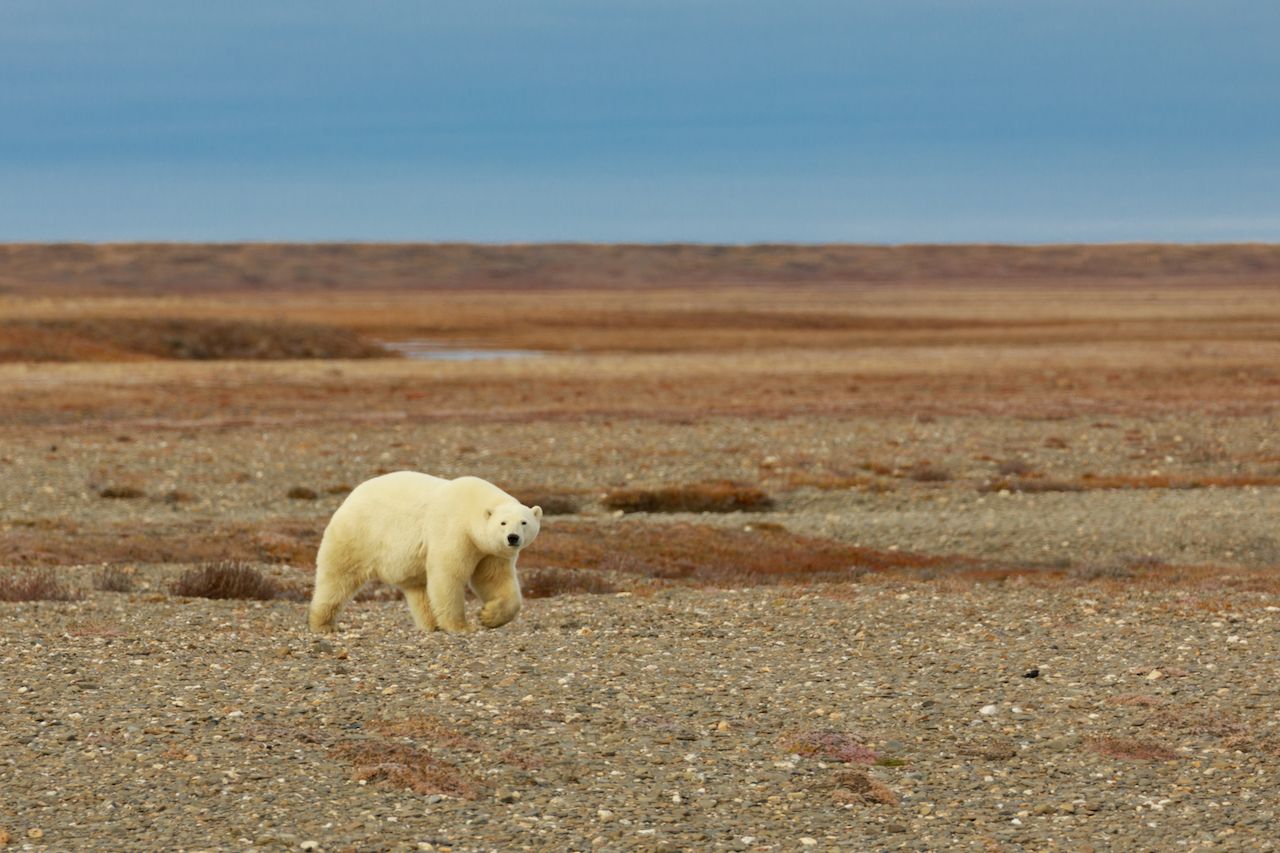 Wrangel Island is a cold and remote polar island in the Arctic Ocean known to be the last dwelling of woolly mammoths. Wrangel Island is a unique, self-contained ecosystem that has the highest level of biodiversity in the high Arctic. It has the world’s largest population of Pacific walruses and is a major denning area for polar bears.

Wrangel Island is an appealing destination for Arctic researchers and bold tourists; however, this place is hard to reach. It’s considered to be one of the least-accessible natural reserves in the world. All visitors must register for an expedition and pay a small fortune to be able to visit this isolated spot. 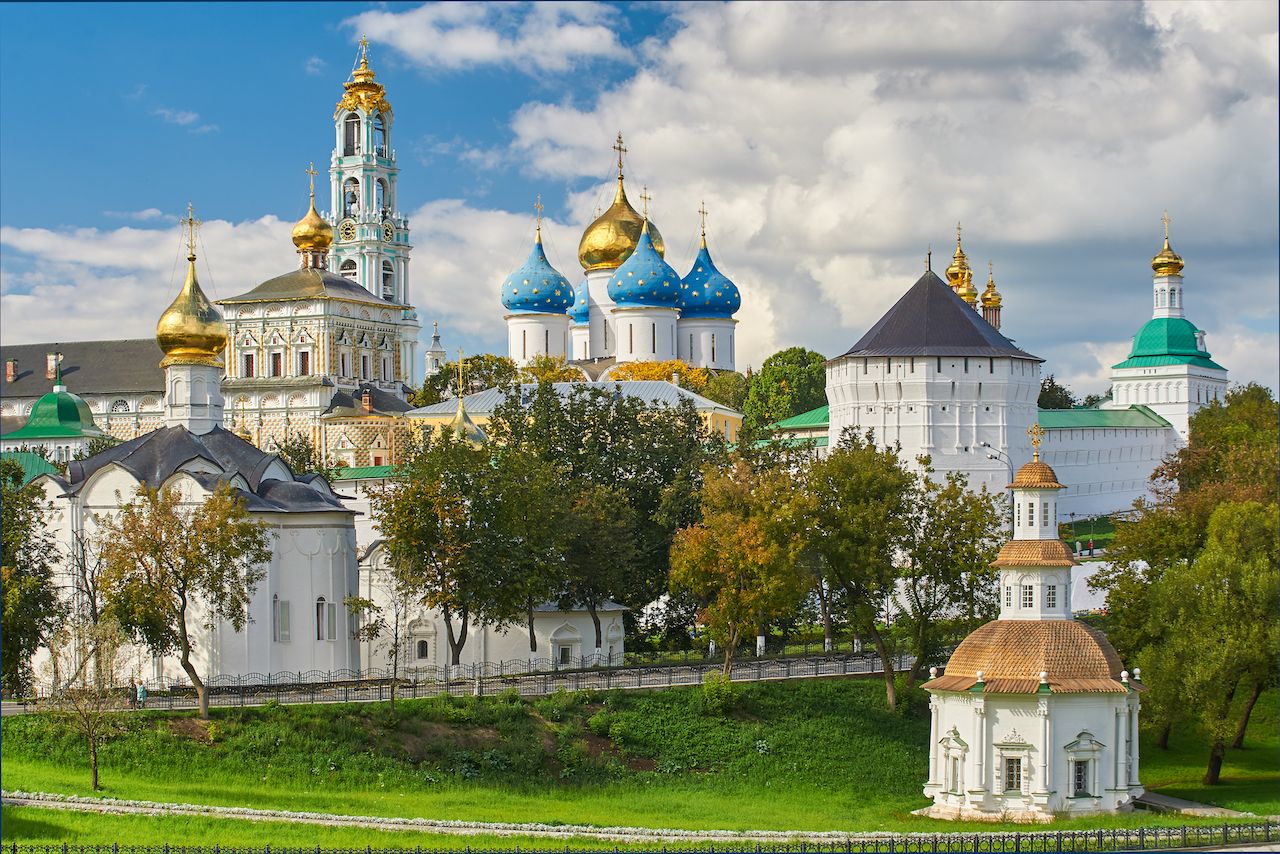 A functioning Orthodox monastery with shiny, gilded domes, the Trinity Sergius Lavra is a major spiritual center, a popular tourist destination, and the final resting place of Tsar Boris Godunov and his family.

This 15th-century monastery is located in the town of Sergiev Posad about 70 kilometers from Moscow and is considered to be the most important working monastery in the country, as well as one of the most significant pieces of Russian Orthodox architecture.

5. The city of Novgorod and its surroundings 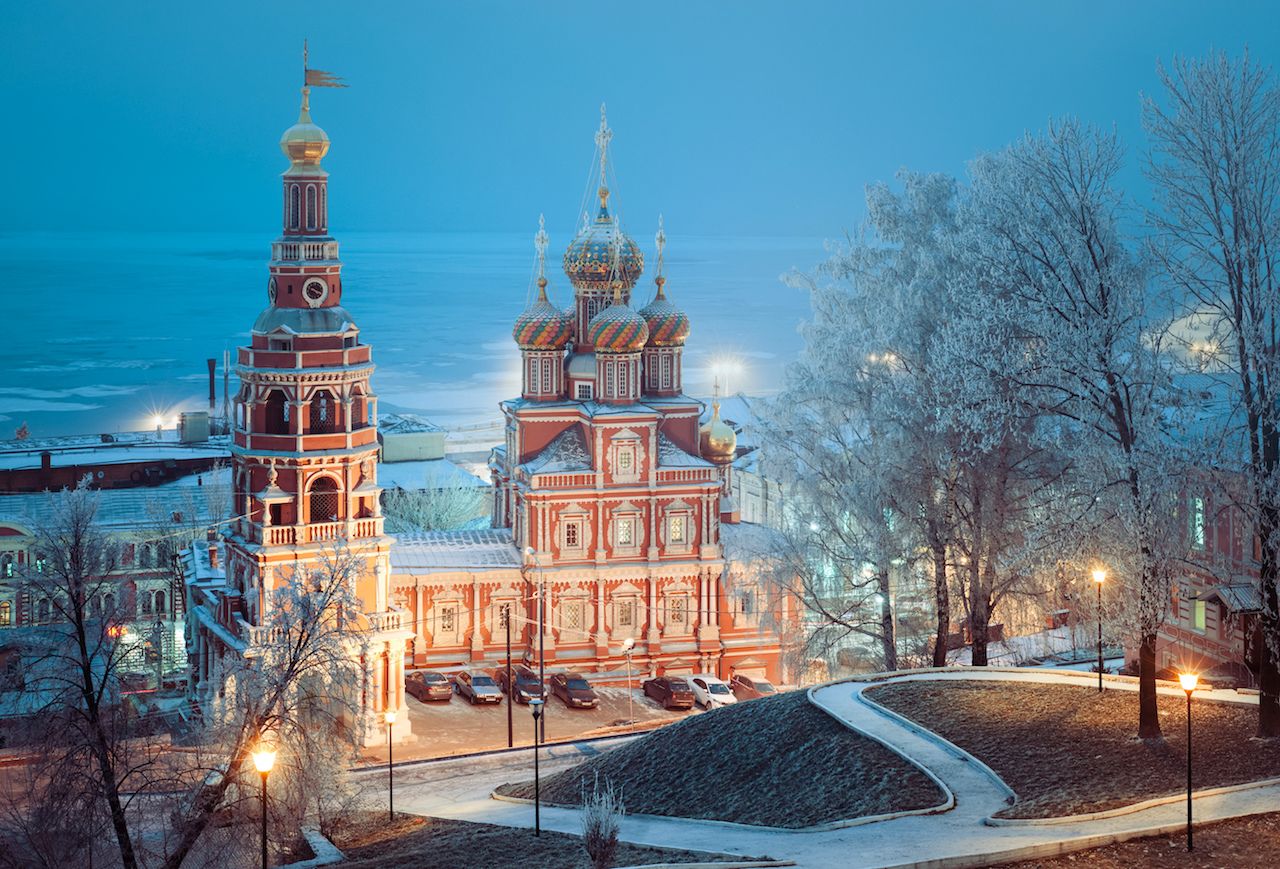 Founded in the ninth century on the ancient trade route between Central Asia and northern Europe, Novgorod was Russia’s first capital. Veliky Novgorod is so old and well-preserved that it’s regarded as a city-museum, housing more than 50 architectural masterpieces of great historical value. Many ancient churches, frescoes, and monuments are still there, including a Kremlin that was built in the 15th century, as well as one of the oldest Russian stone buildings — the church of St. Sophia — built in the 11th century.

Veliky Novgorod is a popular tourist destination that’s very conveniently situated on the way between Moscow and Saint Petersburg. 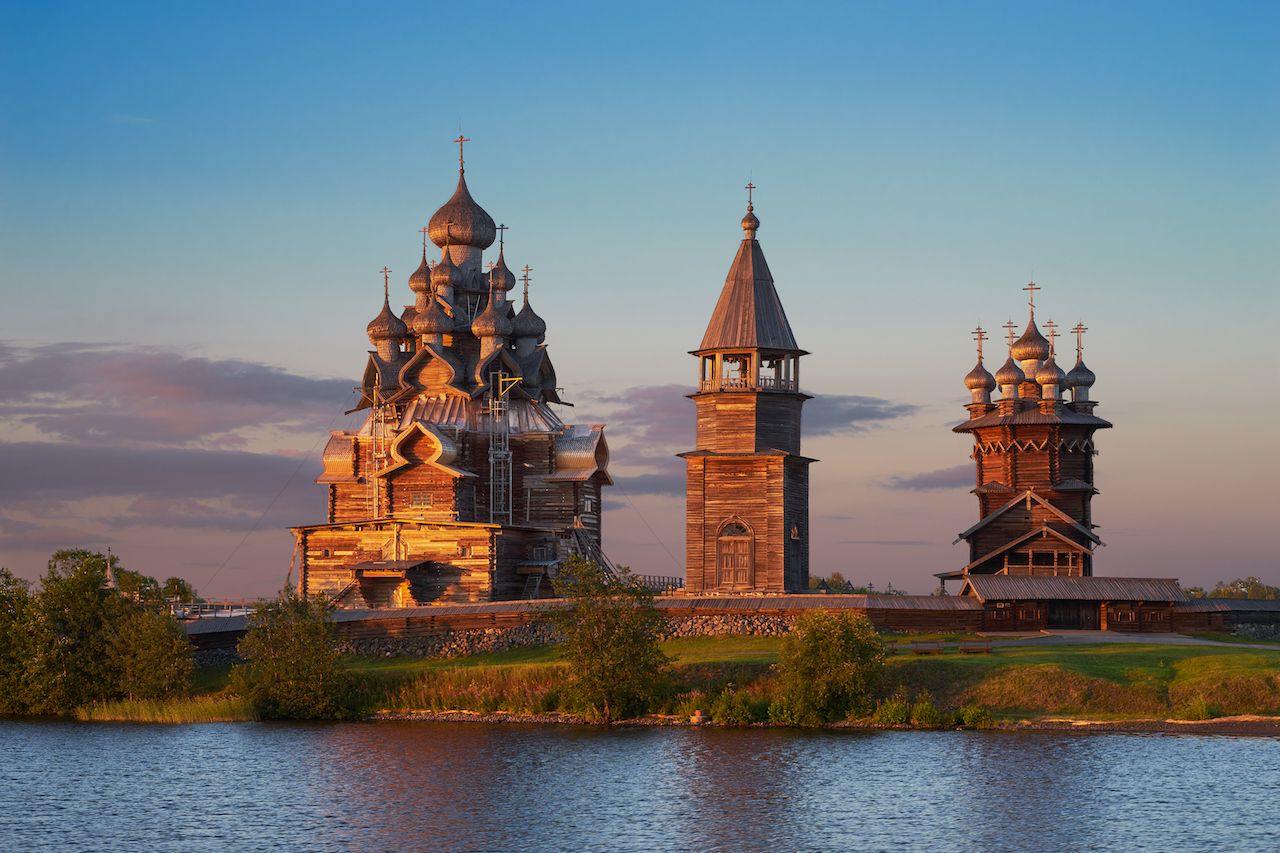 Built in 18th century on one of the many islands in Lake Onega in Karelia, Kizhi Pogost is a unique example of the lost art of traditional Russian wooden architecture. The island houses two impressive churches and an octagonal clock tower, all made entirely of wood. It’s the only remaining complex with two multi-domed wooden churches in the whole country.

According to the legend, the 37-meter high Church of the Transfiguration was created without a single nail and using nothing but an ax, which the carpenter then threw into the lake so nobody could repeat such a feat. Inside this 22-domed church, a four-level iconostasis stands, containing 102 icons.

To get to this island, you can board one of the many boats from Petrozavodsk, a city that connects to Saint Petersburg by train. 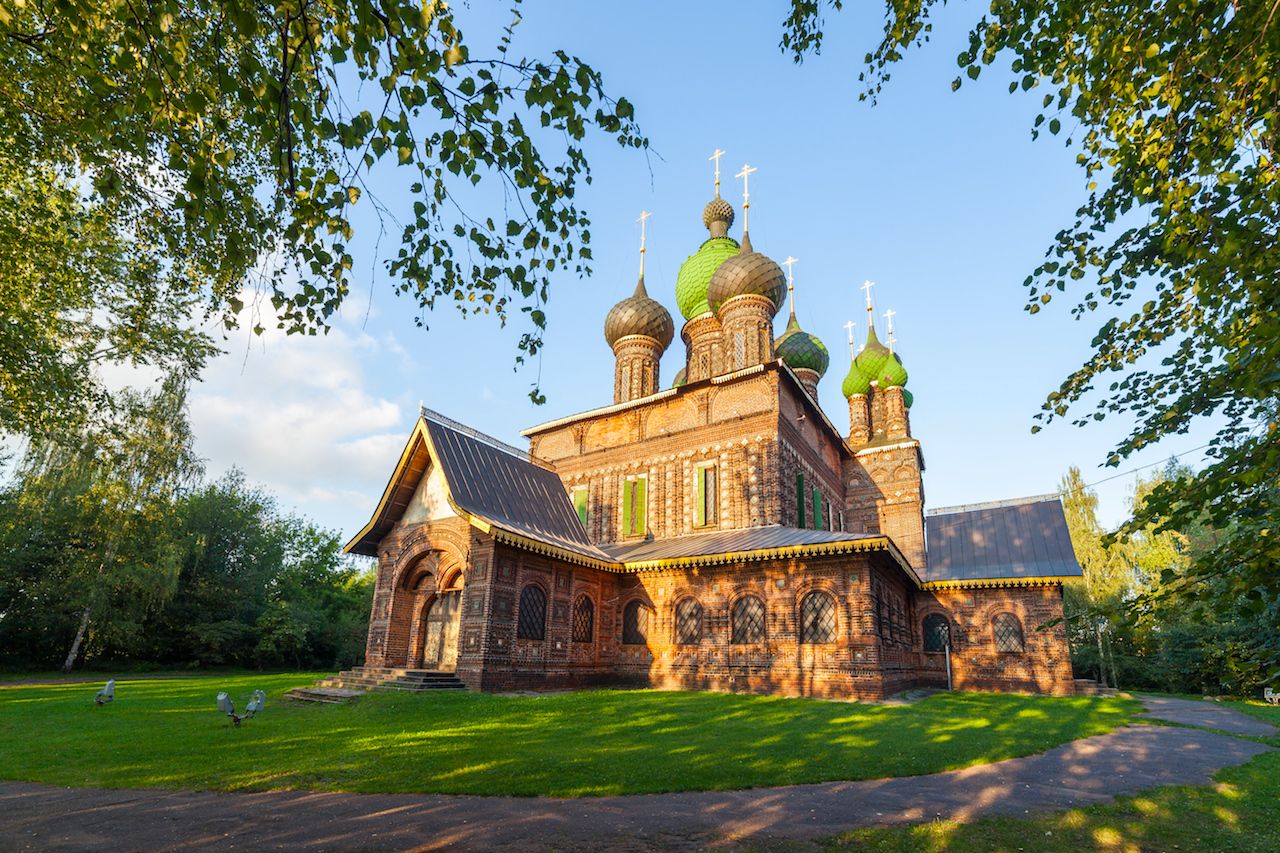 Yaroslavl stands on the confluence of the Volga and Kotorosl Rivers, about 250 kilometers from Moscow. It’s one of the most ancient and well-preserved Russian cities. The best-known features of the city are its 16th and 17th-century churches and monasteries that contain beautiful murals and iconostases. 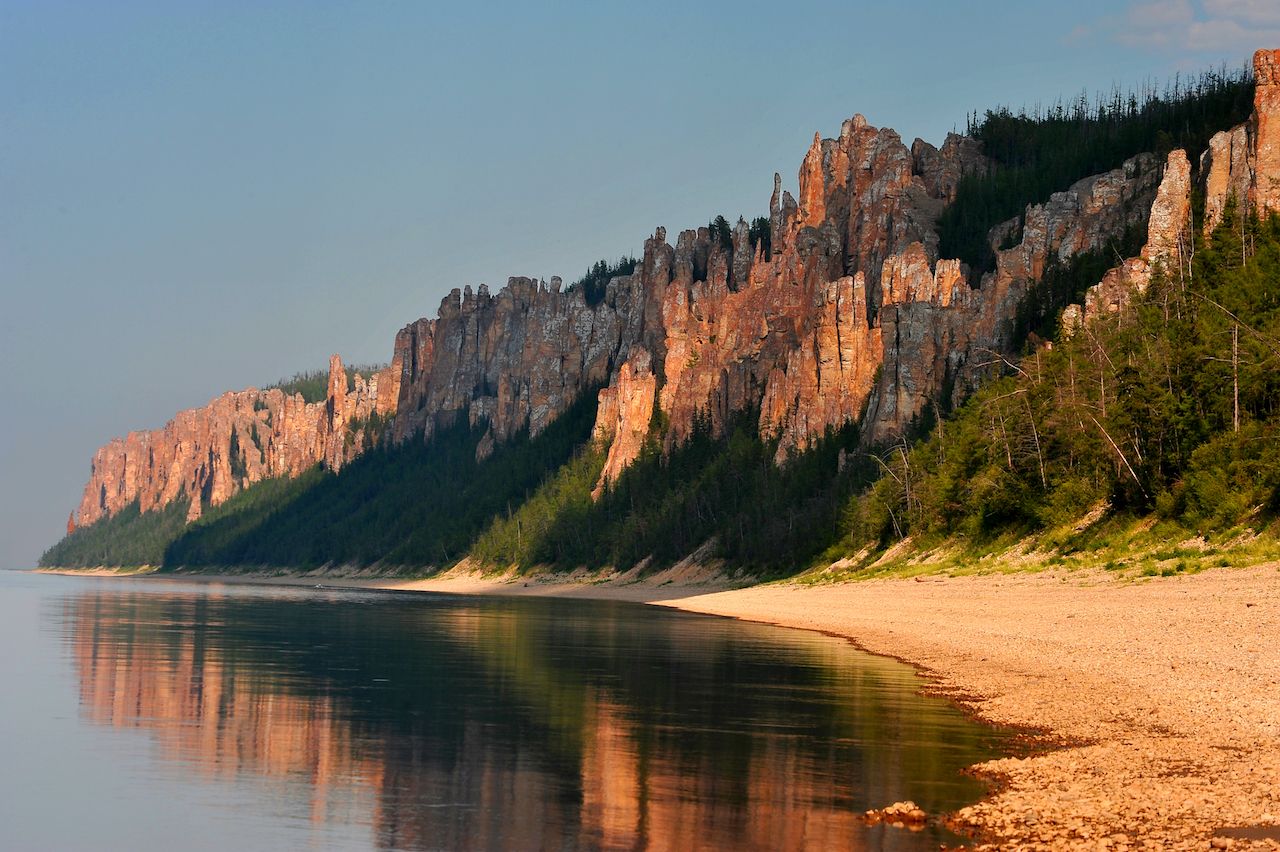 The Lena Pillars are titanic monoliths up to 200-meters tall lined up along the bank of the Lena River, about 110 kilometers upstream from the city of Yakutsk in eastern Siberia.

They were a sacred site for the indigenous Yakuts and Evenk tribes. Regular folks feared the spirits of the rocks and dared not enter. Only the Elders and Shamans could safely approach what they deemed to be people turned to stone.

It’s not just rock spires, though. Numerous caves, ancient rock paintings, and abundant Cambrian fossils can be found in this national park. You can get there by water from Yakutsk or by road along the riverbank. Unless you fear the spirits of the rocks, that is! 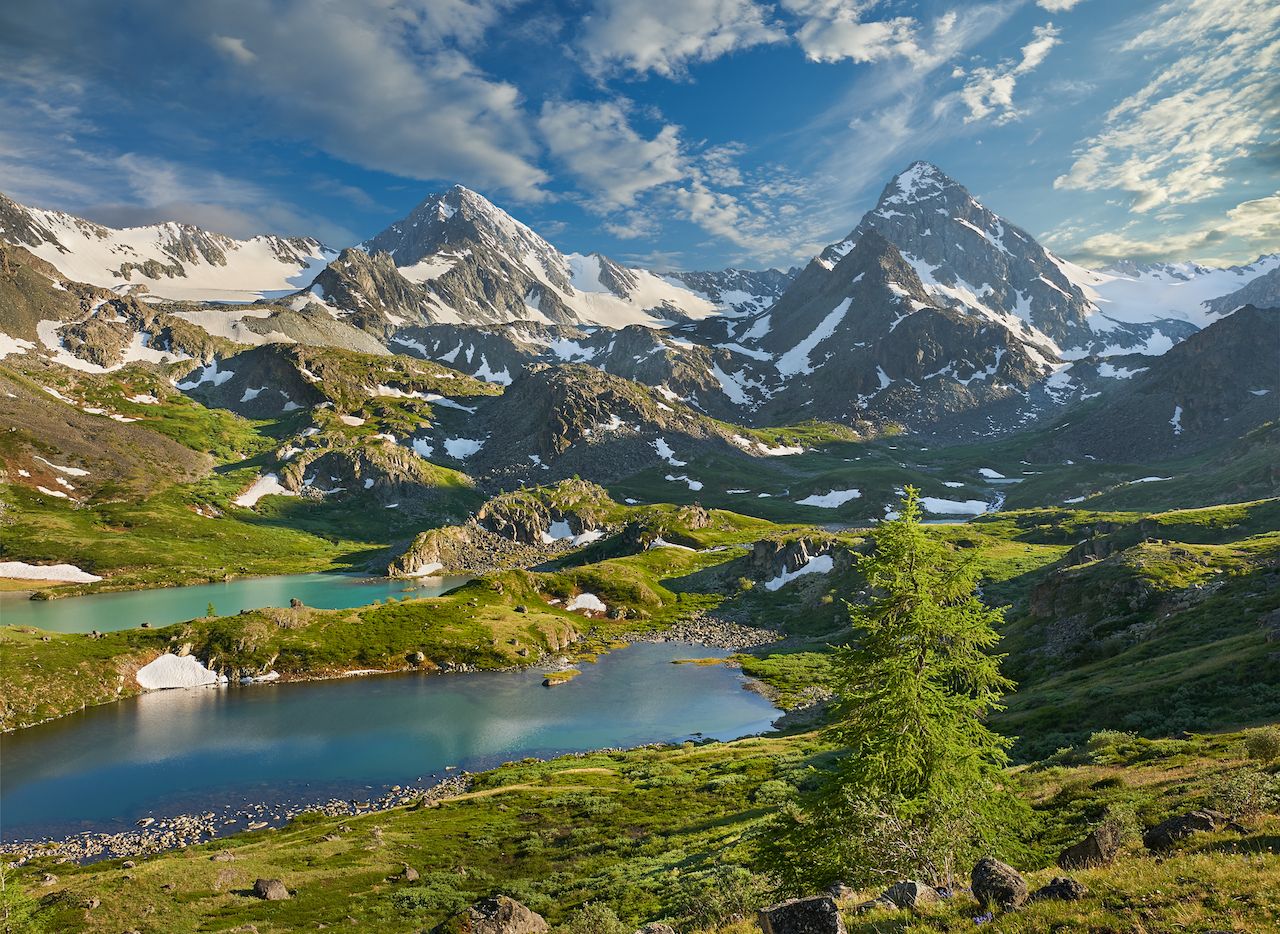 The Golden Mountains of Altai in southern Siberia are unquestionably one of the cleanest and most beautiful regions of Russia. It is home to many rare and endangered species such as the snow leopard, and is encompassed by two major Siberian rivers — the Ob and the Irtysh. A popular place for hikers and mountaineers from all around the country, the Altai mountains are wonderful examples of the beauty of Siberian nature. The crisp mountain air is untainted by industries or highways, making Altai the perfect place for pretty much any outdoor activities.

In St. Petersburg, a Chef Is Embracing Soviet Cuisine and Taking It To New, Delicious Levels