SUMMER CONCERT SERIES are in full swing across the country, but in Kentucky that doesn’t mean much — live music happens year-round across the state in both indoor and outdoor locations. Though Kentucky has historically been associated with bluegrass (and that definitely still resonates today), the music scene here is far, far more than twang, fiddles, banjos, and guitars. With these nine spots, you can see for yourself.

Where: 625 S 4th St, Louisville
Best time to go: Anytime. All the time. Whenever you can. Notable up-comers include John Mulaney, John Cleese, and Idina Menzel.

The Palace is a work of art. Set just a three-minute walk from the famous Brown Hotel in downtown Louisville (and in the heart of the theater district), this place is ornate. We’re talking arcades, balconies, turrets (turrets!), coves, vaulted ceilings, gold filigree, and 139 sculptures of historical figures lining the walls. Blues, reds, and golds light up the interior, and the original Spanish Baroque motif is still going strong, thanks to careful renovations.

Inside, you’ll find a vast two-floor lobby with bars (plural) perfectly situated across from the doors to the music hall, which run the length of the theater. If you feel like the moment is speaking to you, you won’t be the first. The attention to detail continues within the music hall itself, and when the lights go down, the ceiling lights up like stars against the night sky. Consider all this the pre-show. 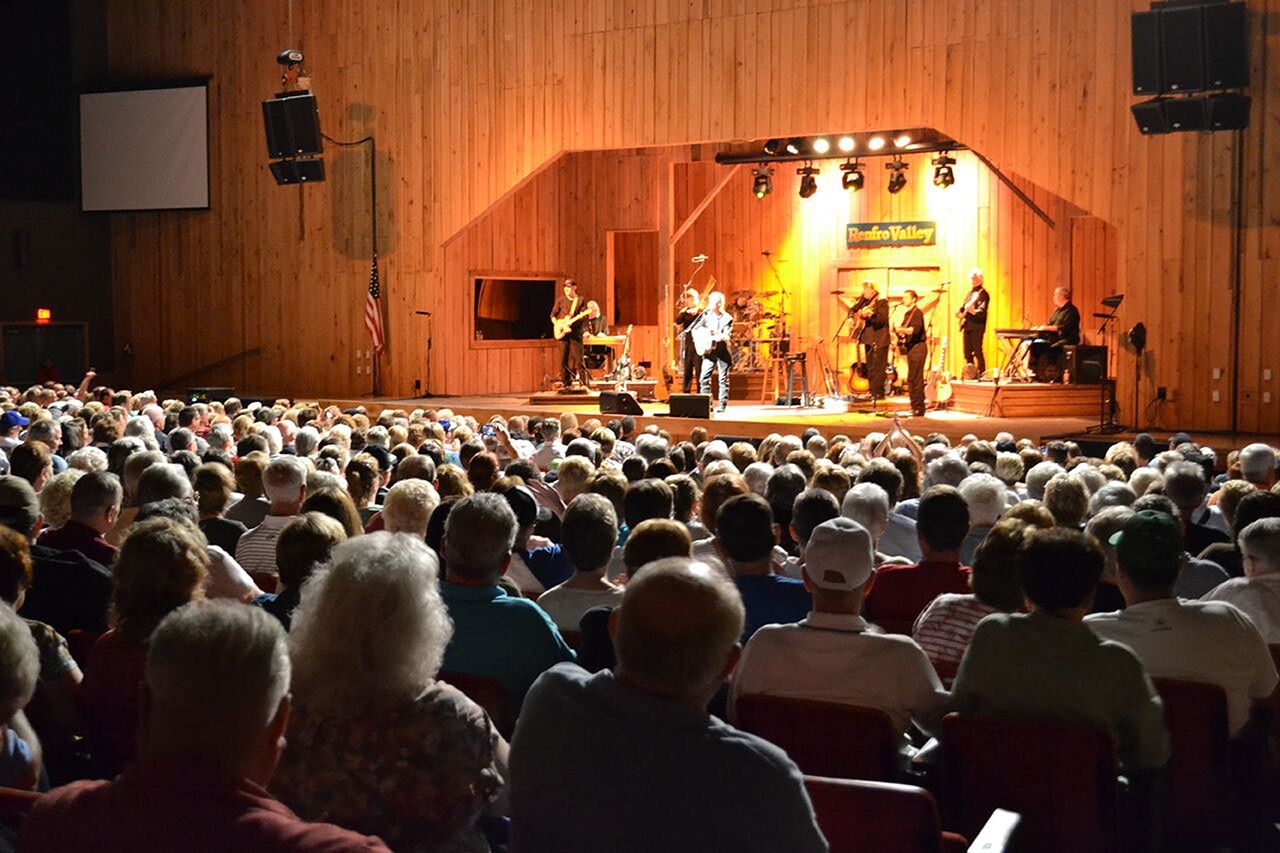 Where: 2380 Richmond St, Mt Vernon
Best time to go: December. Renfro Valley caps off the year with its famous “Christmas in the Valley.”

Just minutes off I-75 in Renfro Valley is “Kentucky’s Country Music Capital.” Located on 90 acres, Renfro Valley Entertainment Center dabbles in just about everything — the property includes the Renfro Valley Shopping Village, two theaters, and two RV parks. But it’s all about the music, and Renfro Valley hosts some of the greatest Southern gospel, the best of mountain bluegrass, and good ol’ classic country every weekend from April to December. This year, you’ll run into the likes of Ronnie Milsap, Johnny Counterfit, Ray Stevens, and Tracy Lawrence.

With 75+ years of history, it should be clear why you’ll find the Kentucky Music Hall of Fame and Museum right here as well.

3. The Norton Center for the Arts

Located on the edge of Centre College in Danville, the Norton Center for the Arts is home to two theaters, and together they feature a hodgepodge of an upcoming lineup — from Martina McBride to Kool & The Gang. The entire facility was designed by an architect from the Frank Lloyd Wright Foundation, which means the Norton Center has incredible acoustics and impressive interiors, both inside and outside of the theaters.

If you come, come early. Before the show, you might want to explore the campus of Centre College (it’s also pretty darn photogenic), grab a beer at Danville’s oldest brewery (the Beer Engine), or have a cup at The Hub Coffee House and Cafe.

Where: 1080 Amphitheater Rd, Louisville
Best time to go: Fall — namely to experience a full sunset and the open night air.

Set in the middle of Iroquois Park in Louisville, Iroquois Amphitheatre provides the kind of outdoor concert experience other venues wish they had. There’s more than 2,000 seats, both covered and exposed, and open seating lets you choose one that best suits you (especially if you arrive early). In addition to the music, local food trucks and breweries are usually onsite, making Iroquois Amphitheatre an all-in-one experience and more like a festival than anything.

Most venues say they do a little bit of everything, but the Iroquois has “eclectic” cornered. They put on free movie screenings regularly (from Disney to Hitchcock), as well as ticketed open karaoke events, and their larger acts range from Foster The People to Garrison Keillor to the Louisville Orchestra. If there’s not something that interests you this week, check back next. 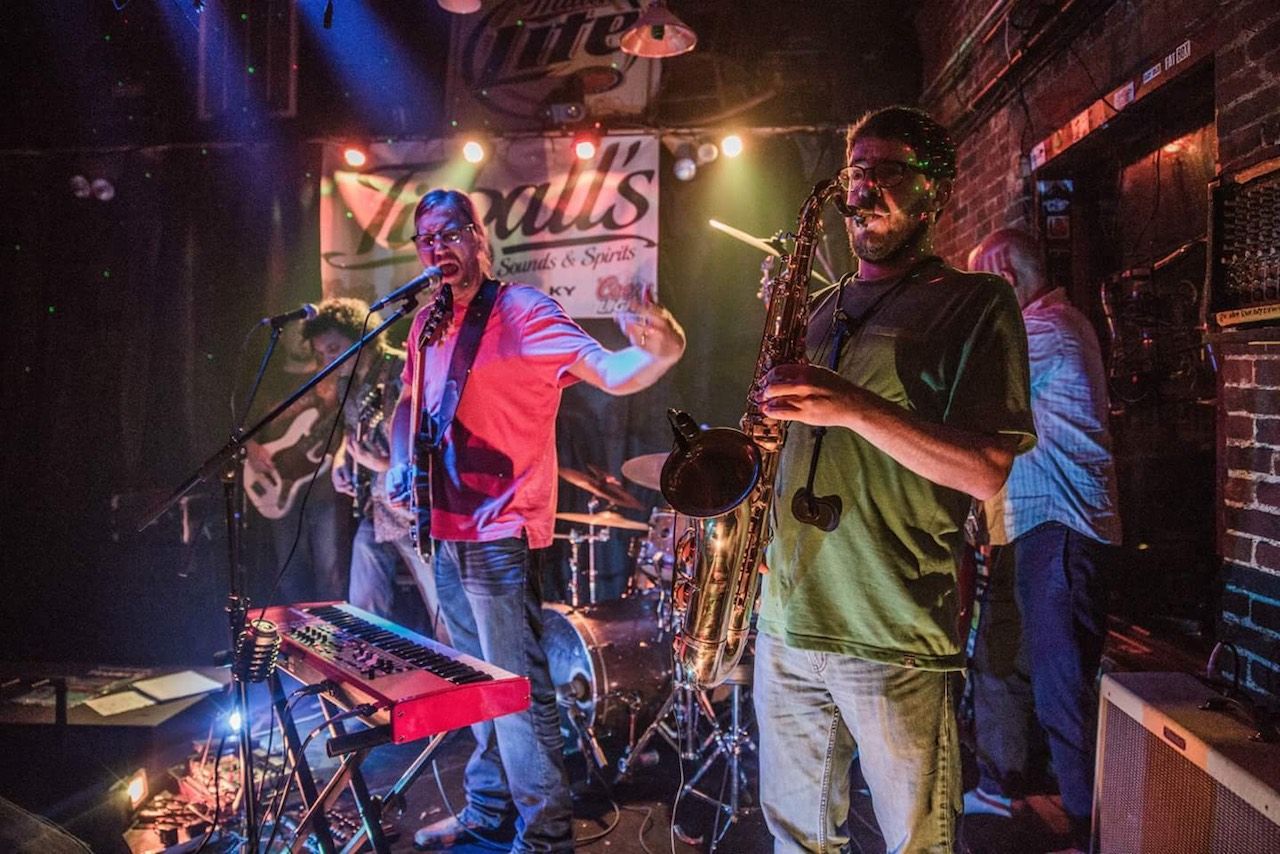 Where: 522 Morris Alley, Bowling Green
Best time to go: When Cage the Elephant plays one of its homecoming shows.

A few blocks from Fountain Square in Bowling Green, Tidball’s sits in a painted blue brick building — if you can’t find it, that’s on you. Having a capacity of only 250 sets Tidball’s apart from most of Bowling Green, and most venues in general. What started as two business partners hoping they could reach 100 patrons on their first night led to a bar that Cage the Elephant used to call home.

Tidball’s is the place to go when you’re looking to feel like a local — just don’t be surprised if you get a few looks when the regulars realize you aren’t. This place practically has a cult following. Order your $5.50 pitcher and enjoy the show, knowing you’ll be an insider by the end of the night. 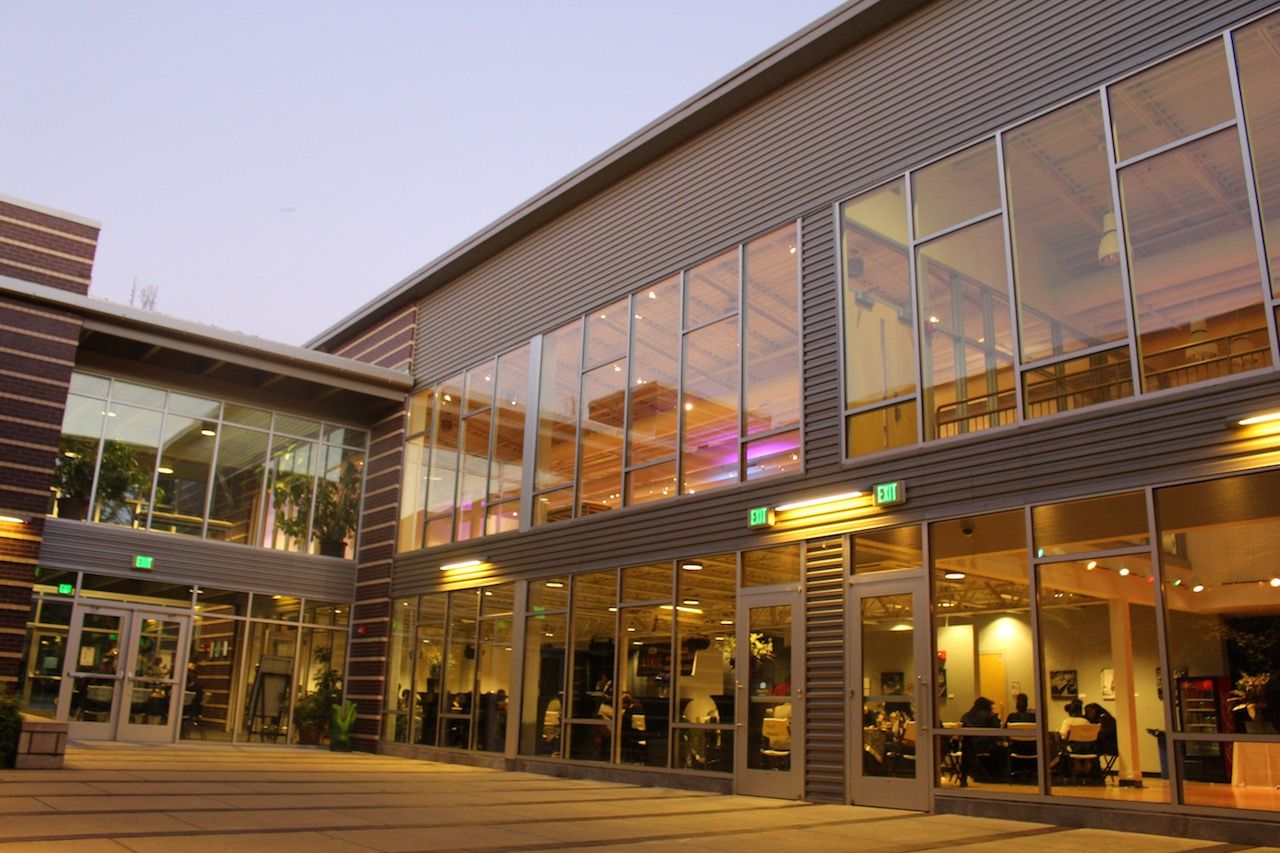 Located just a couple of blocks from downtown Lexington, the Lyric was recently renovated and reopened in 2010 after being closed for decades. It used to be a theater exclusively for the black community, and in its heyday played host to the biggest names around — think Ray Charles, Count Basie, and B.B. King.

Since reopening, the Lyric Theatre has returned to honor its past and celebrate diverse cultures, creating a space that focuses on community inclusion. Its variety of programming has definitely supported this mission. Just look at the summer film lineup, routinely featuring movies that give representation to the black community. 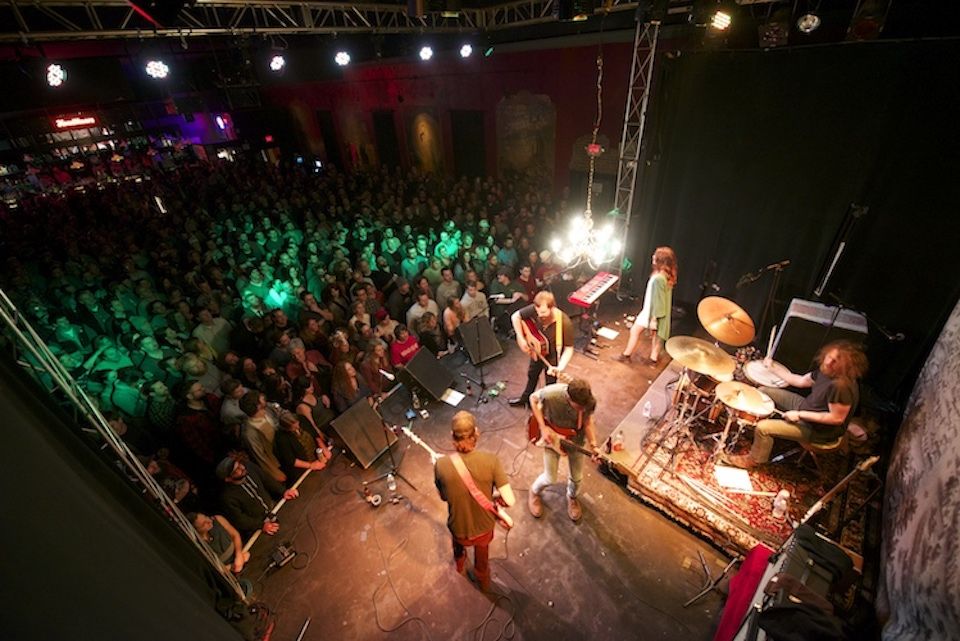 Headliners is well-known for hosting bands from all genres and styles, giving everyone the opportunity to experience its old-school vibe. With few decorations — this isn’t a pomp-and-circumstance kind of joint — and set away from downtown Louisville, passers-by rarely take a second glance at Headliners, but what goes on inside is an experience no one forgets. It’s intimate. If you want to get closer, just budge in.

The small space — it used to be a cafeteria — creates an atmosphere where the only thing you want to do is listen to the music. There’s no spectacle here and nothing to distract you, and this fact means everyone who comes, comes for the tunes. Ever been to a show with a bored, disengaged audience? That doesn’t happen here.

Where: 730 Madison Ave, Covington
Best time to go: Winter. The Madison has a cozy holiday feel that matches the nostalgia of its history.

If you find yourself in the northern part of the state near Covington, do yourself a favor and check out the lineup at the Madison Theater. It’s a converted old movie theater, and it still rocks that classic marquee façade that looks so good in photos (and in real life). Inside, the Madison keeps up its old-theater feel with cabaret and club-seating, creating an intimate, only-in-Covington experience for whoever walks through the doors.

Next to the theater you’ll find Madison Live, a small venue with two stages that hosts up-and-coming acts. There’s also a rooftop patio where bands play. 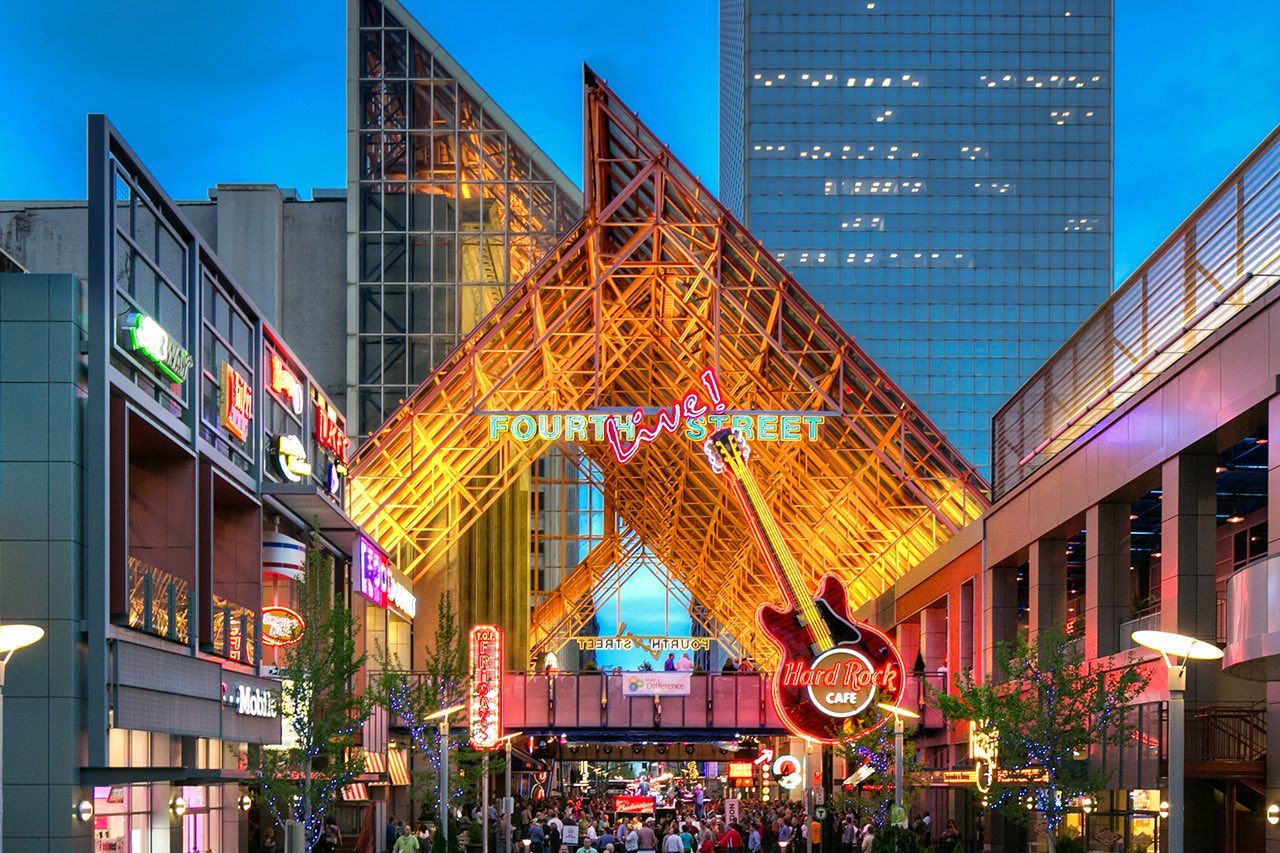 Where: 4th Street, between Liberty and Muhammad Ali Boulevard, Louisville
Best time to go: Winter and spring. If you plan it right, you can catch a basketball game at the KFC Yum Center before heading to the show.

Just down the street from the Louisville Palace, and in the heart of Louisville’s downtown, is Fourth Street Live. Every weekend night the street is closed to cars, and usually a band is set up and playing in the middle of it. Instead of a farmers market, picture more of a music market, only the nearby shops and restaurants are in on the mix, and the pedestrian mall is full of people from corner to corner. And the music itself? It could be an international act like Three Dog Night, Violent Femmes, or Justin Bieber.

The best seats in the house tend to be at one of the restaurants on either side of the street, like Hard Rock Cafe or Guy Fieri’s Smokehouse. Head across the street to The Sports and Social Club to get in a few games of bowling or corn hole after the show — Fourth Street Live stays bumpin’ for a while.