People flock from all over the world to see Alaska: namely nature, pristine and untouched. Trees, glaciers, mountains — they’re all part of the package. But what people are most excited about is seeing wildlife. Whales, bears, salmon, bald eagles — Southeast Alaska has it all and Juneau is where nature comes alive.

Life here is closely connected: salmon are eaten by bears and scavenged by eagles, and the forest is fertilized by the salmon carcasses, which also provide food for moose and porcupines. As creatures die they eventually give life to something else. Each animal works hards to optimize its place in the food chain: to find enough of their own food, but also to avoid being someone else’s food.

The Mendenhall Valley, buttressed on either side by four-thousand-foot mountains, ends at the Mendenhall Glacier which is located 12 miles from downtown Juneau. It is a small cross-section of Southeast Alaska’s unique eco-systems. In a single afternoon, you can see a countless array of iconic animals, and learn a little bit more about how they all live in harmony together — and where humans fit in the picture.

Bears are one of the most exciting animals to see in the wild, mostly because they are apex predators: one of the few creatures that could potentially be above us in the food chain. They are capable of harming humans, which makes an encounter with them all the more thrilling. 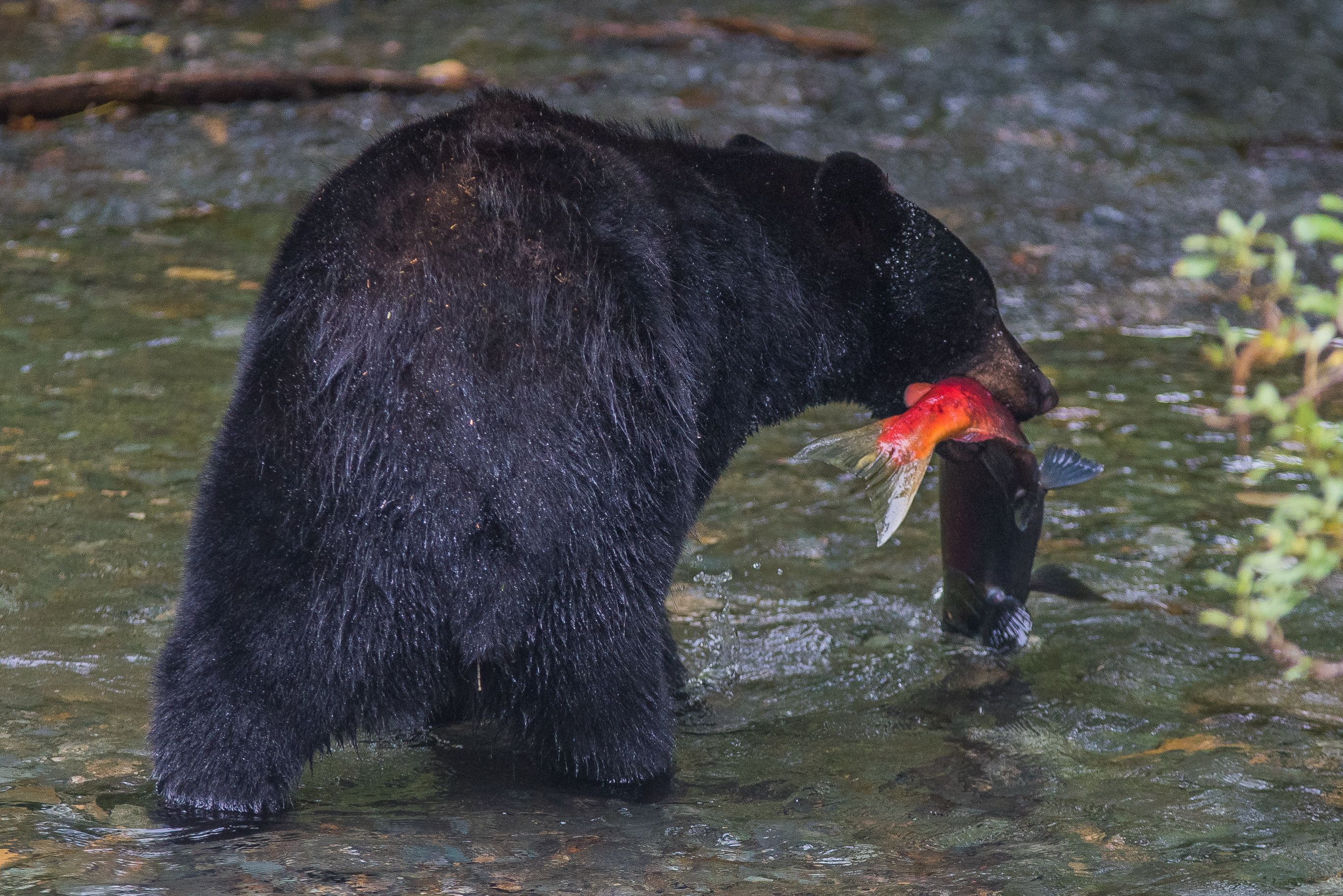 There are two kinds of bears in Southeast Alaska: black bears (which range in color from black to cinnamon) and brown bears (coastal brown bears, grizzlies, and kodiaks are all sub-species of brown bears).
Photo: Matt Koller

In the Mendenhall Valley you’ll likely only encounter black bears, and even then, only in the summertime. For the most part, encounters will be generally brief. The summer months mean they are constantly searching for food — plants, salmon, berries — and have little interest in humans. What goes in must come out, and bear scat is a useful tool for plants and berries to spread their seeds throughout the forest.

We think of bears as vicious carnivores, but in fact, 80% of a black bear’s diet is vegetation. Yet come summertime, salmon begin to swim upstream to lay their eggs and die, and black bears begin to feast on them.

Summertime is spawning time. In July, sockeye salmon return to freshwater streams to spawn, dying soon afterwards. Salmon are known as “big-bang animals” — meaning that they reproduce once, and die. This is the natural cycle of their life.

They spend most of their short lives — about 2-3 years — out at sea and return to the same place where they were born to spawn and fertilize their own eggs. While we don’t know exactly how the salmon find their way home, it’s thought to have something to do with their olfactory senses: they smell the distinct odor of the leaves and dirt in their home streams.

Once the salmon transition from saltwater to freshwater, they stop using their energy on anything else except making their way upstream. The salmon cease to eat, meaning that their muscle — the part we want to eat — starts to degrade. 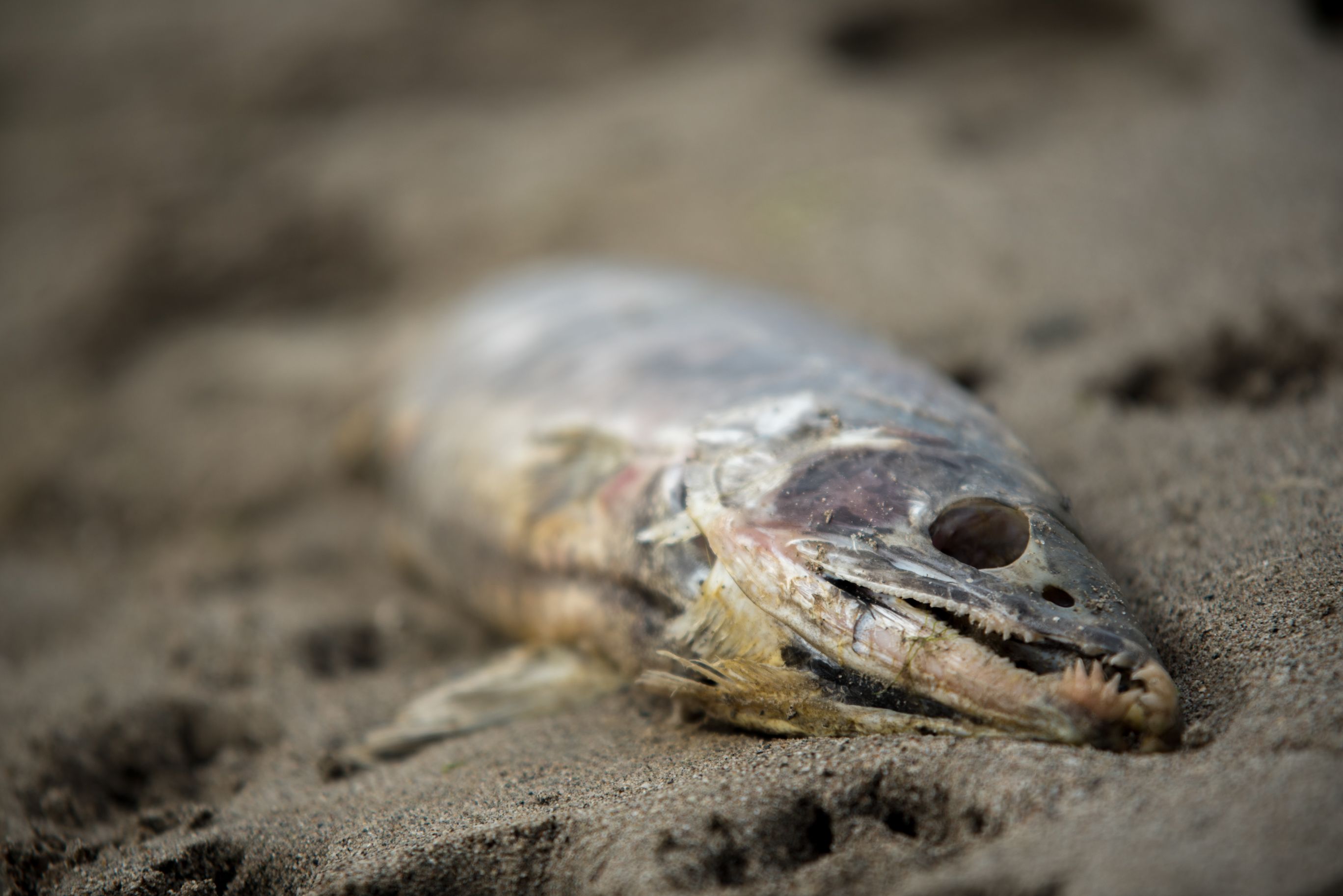 While we might not want to eat these “zombie salmon,” bears are a bit less discerning. Ideally, they prefer females who have not yet laid their eggs: bears will eat the head, and the belly full of eggs, because that is where the most nutrients can be found. Protein-rich, it’s the best way for them to start packing on fat reserves to make it through the long, cold winter.

The Mendenhall Valley is situated in the middle of a lush temperate rainforest, filled with vibrant life. Yet the forest at the foot of the Mendenhall Glacier hasn’t been there for very long. In fact, only a few hundred years ago the glacier once stood in the spot where the salmon are today. 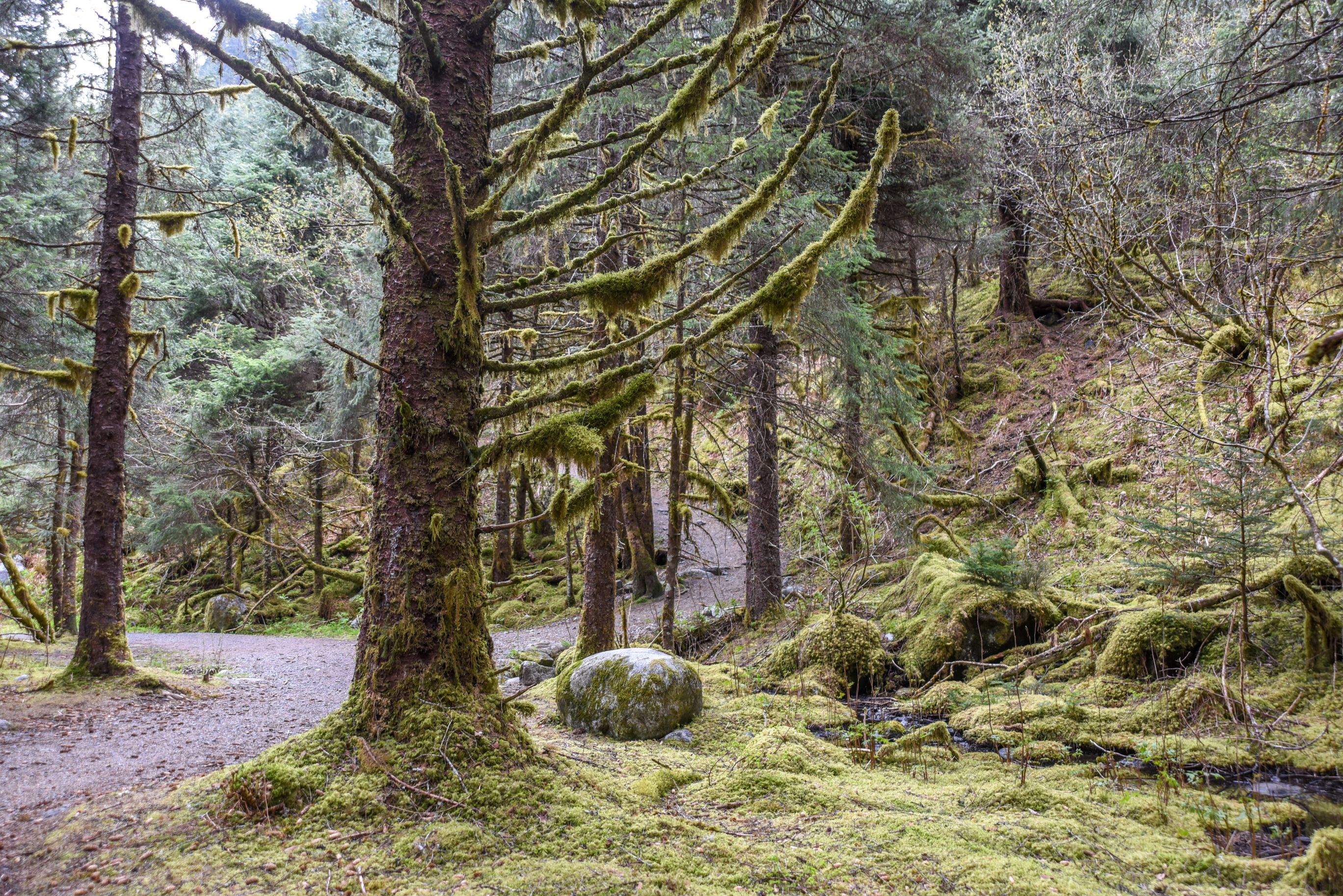 The fragile eco-system of the temperate rainforest needs to be fertilized. The salmon carcasses left behind by the bears provide a vital source of nitrogen, and the dead salmon in the streams are picked apart by birds—from gulls to bald eagles—whose droppings spread fertilizer throughout the forest.

The salmon provide an important food source for bears (high in protein), but it also serves to feed the forest through which their streams flow. The salmon might die, but they help give life to the bears and the trees.

Bears aren’t the only animal that eats salmon. Bald eagles will happily feast on whatever small salmon they can catch — though they will just as gladly scavenge the remains of a dead one. 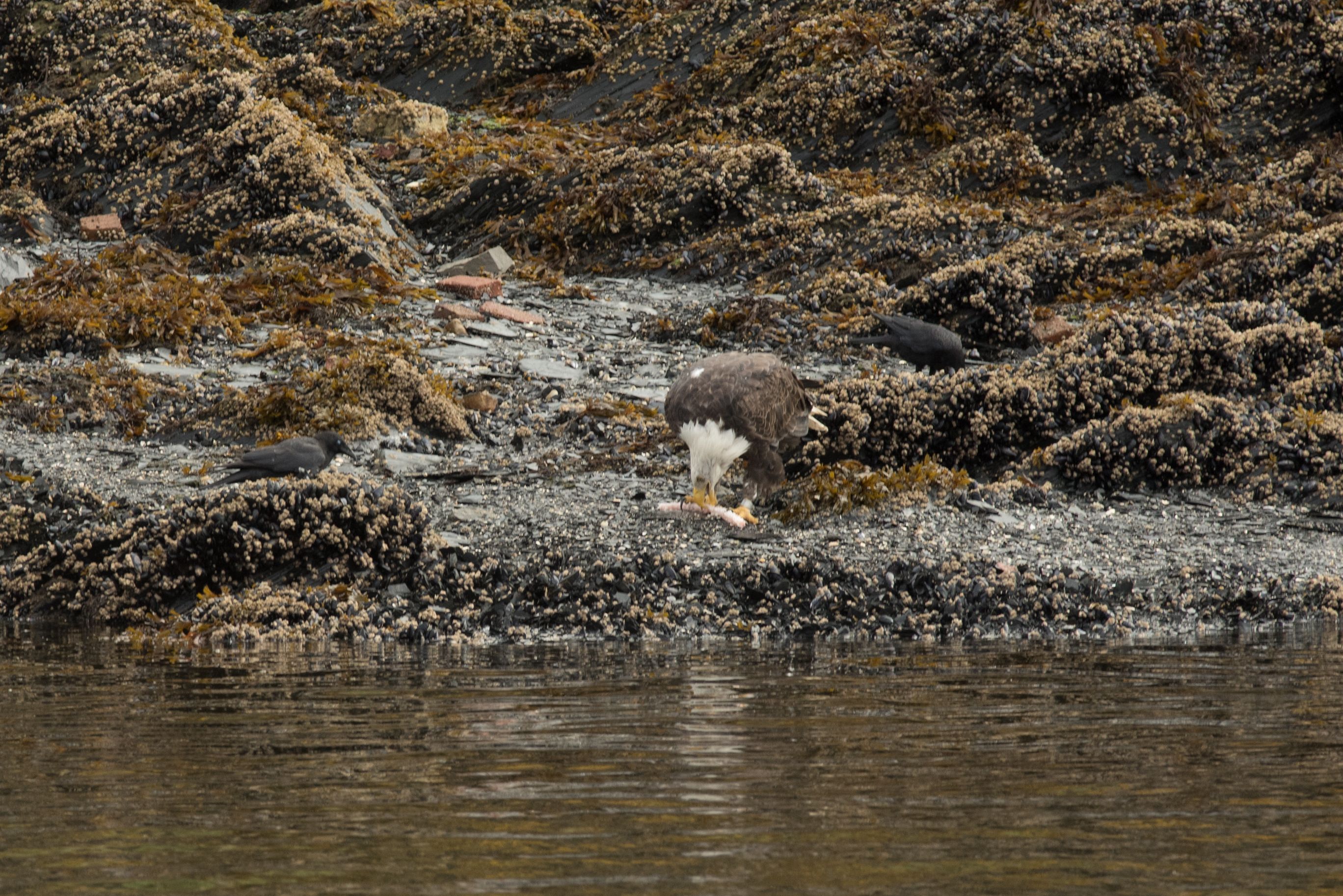 They can live for twenty years or longer, but remain juveniles for about five years, at which point they will molt and gain their distinctive white heads and dark brown bodies. Until that point, they have a lighter brown plumage and are often mistaken for another species. 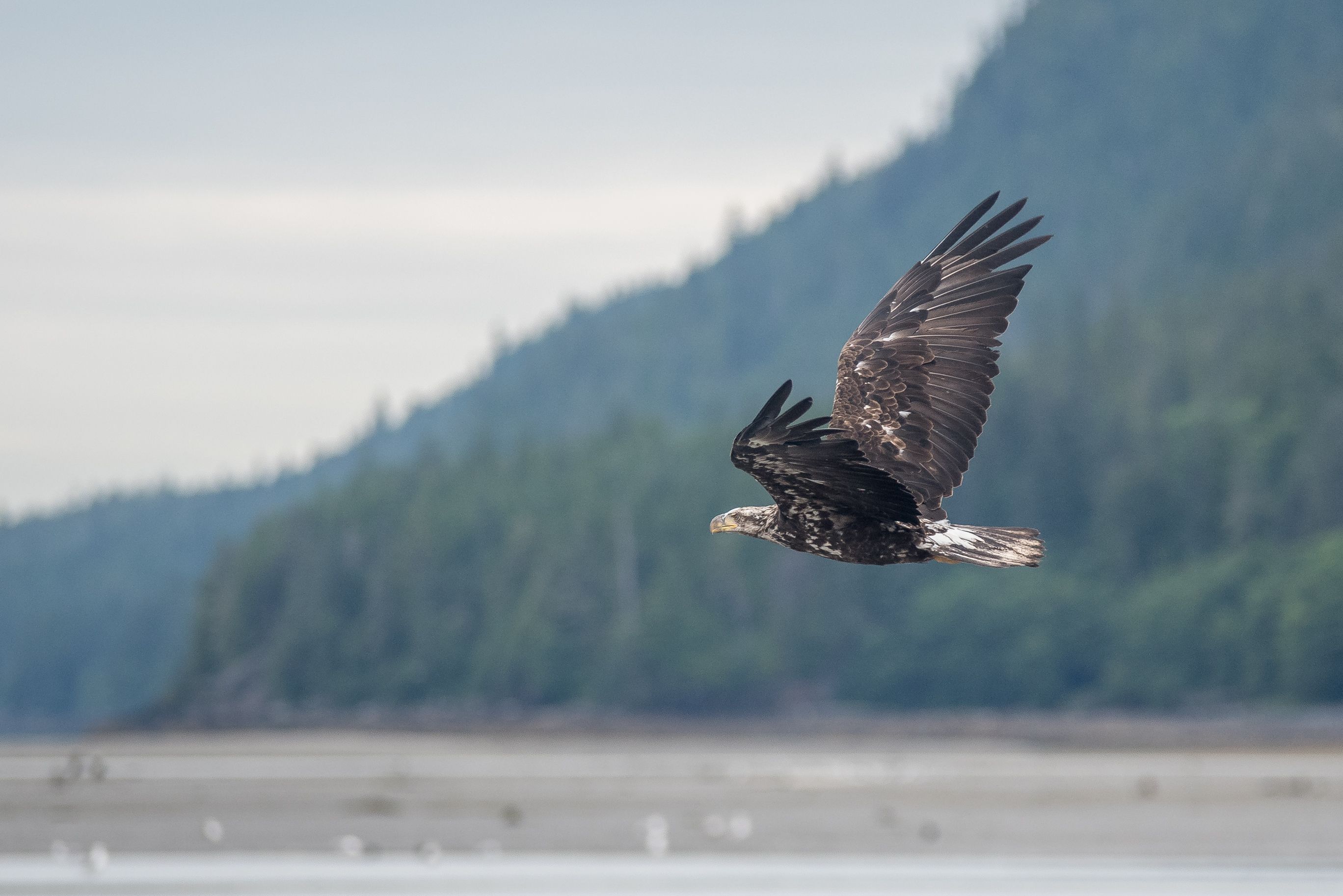 Juvenile bald eagles are larger than adults, which must expend much more energy finding food and building a nest. The juveniles let their parents do all the work for them, spending their days getting nice and plump: think of them like a lazy teenager holed up in his room.
Photo: Matt Koller

Yet once fully grown, their wingspans will reach up to eight feet in length, and they have no natural predators. While they are no longer considered endangered, they are a protected species, and if you’re found in the possession of a bald eagle feather it can result in a whopping $100,000 fine and a year in prison.

The Mendenhall Glacier is a river of ice, flowing forwards from the Juneau Icefield, and bringing with it ground-up rocks and clay known as glacial silt. But it is also losing mass at the front, due to the gradual warming of the planet. This means that the face of the glacier retreats further into the valley every year. 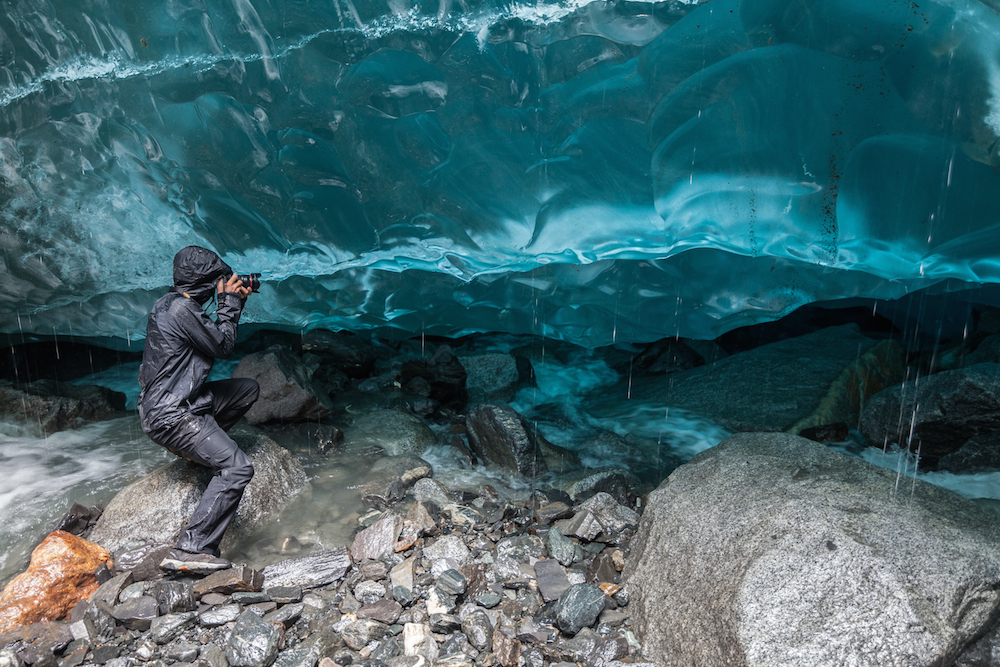 As the face of the glacier retreats, the rainforest grows in its place. The glacier might be retreating, but as it does it gives life to the trees and plants of the rainforest. 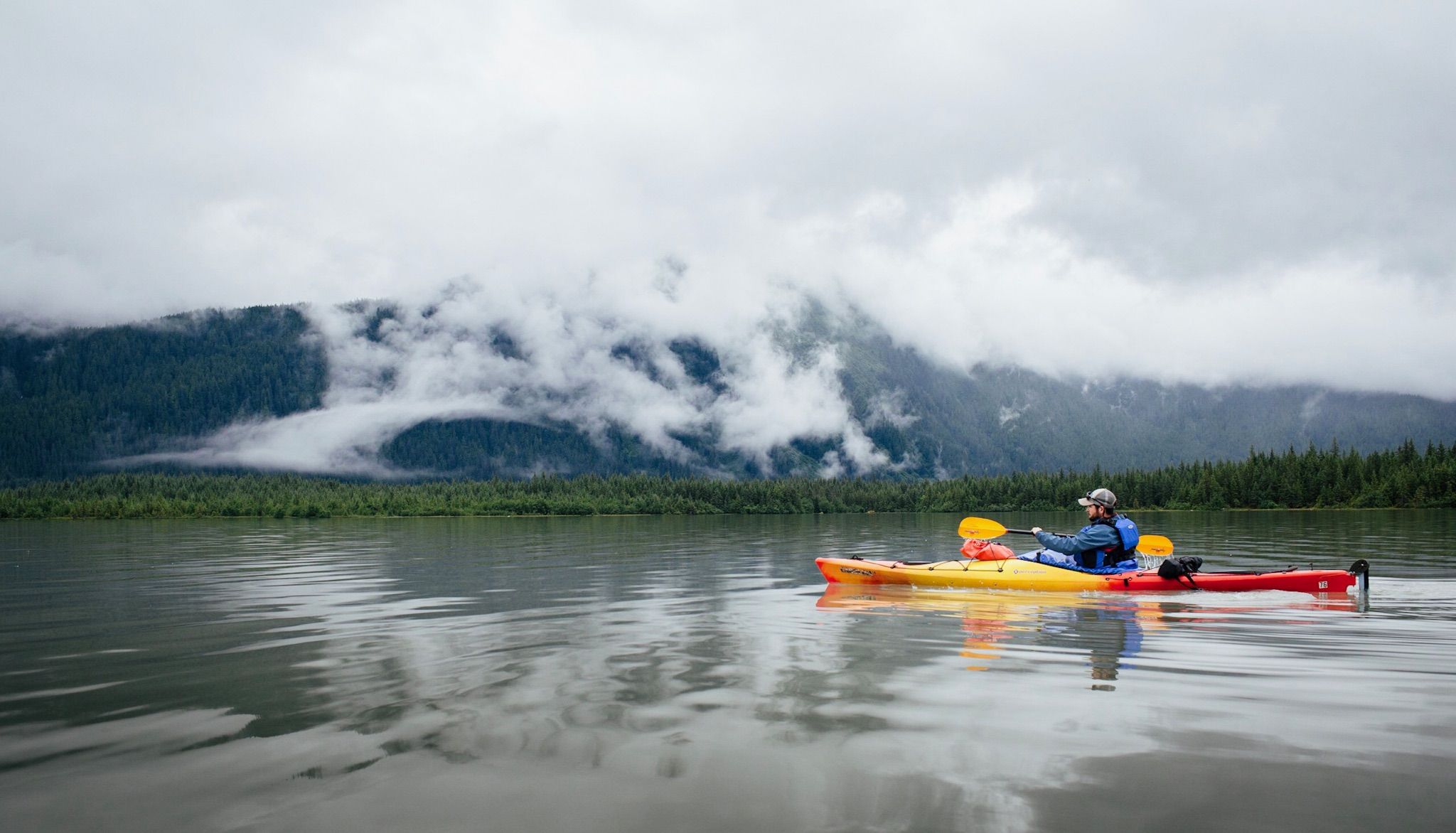 Dead salmon, bear scat, and bird droppings help fertilize these trees and plants and spread their seeds throughout the forest.

Glaciers, ice fields, and rainforests are not the ideal habitat for one of Alaska’s biggest mammals — the moose. Moose prefer forested areas with lakes and streams, but every now and then, one stumbles through the old-growth forest to find itself at the edge of Mendenhall Lake.

We might think of moose as large, harmless deer — but this is far from the case. Moose are more aggressive than bears and have proven to be more of a threat to humans. While they might attack you if they see you as a threat, they won’t eat you, because they are more interested in feeding on the vegetation of the forest floor.

Humpback whales do not have teeth; they are baleen whales. Their throat is only the size of a large grapefruit — so with no teeth and a small throat, they make for pretty poor predators, despite being 40-50 feet long. This forces them to eat krill, herring, and small salmon — food small enough to fit down their throats. 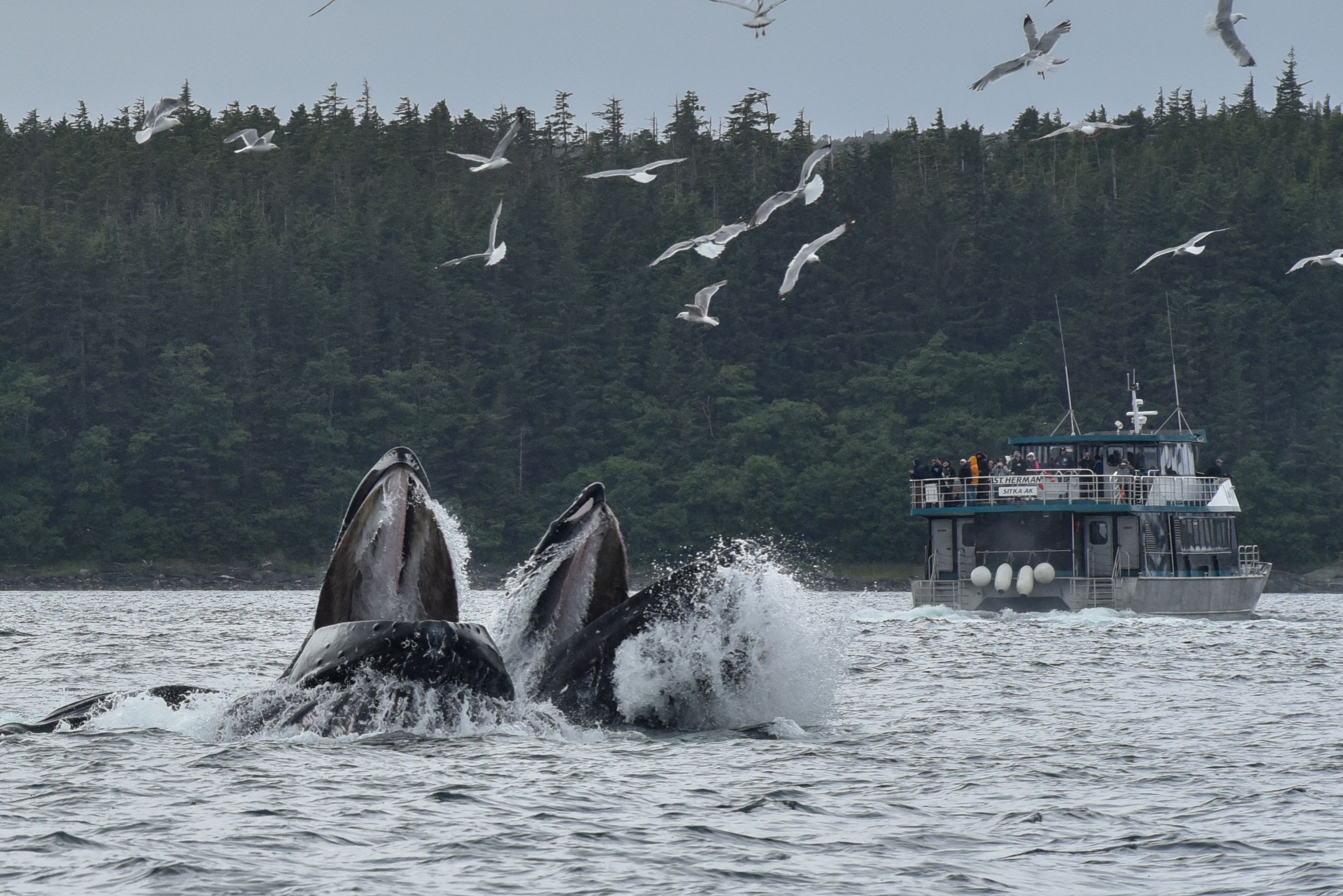 Humpbacks come here to feed: they’ll open up their giant mouths, and take huge gulps of water—around 15,000 gallons worth—and with it all the krill living in the water. Using the baleen plates like a sieve, they’ll filter out the water and keep the krill in their mouths.
Photo: Matt Koller

Krill are small, shrimp-like crustaceans that feed on plankton. Plankton are small, single-celled organisms that use nutrients found in glacial silt to build their cell walls, meaning the presence of the glacier actually helps to feed the whales.

Often, humpback whales will engage in a cooperative group-feeding method, known as bubble-net feeding. One whale will swim below a school of fish (usually herring), emitting small bubbles. The other whales will swim in a circle around the bubbles, causing the school of fish to cluster tightly together, at which point all of the whales will swim upwards towards the surface of the water, mouths agape, leaving the fish with nowhere to go — except in the whale’s mouth. 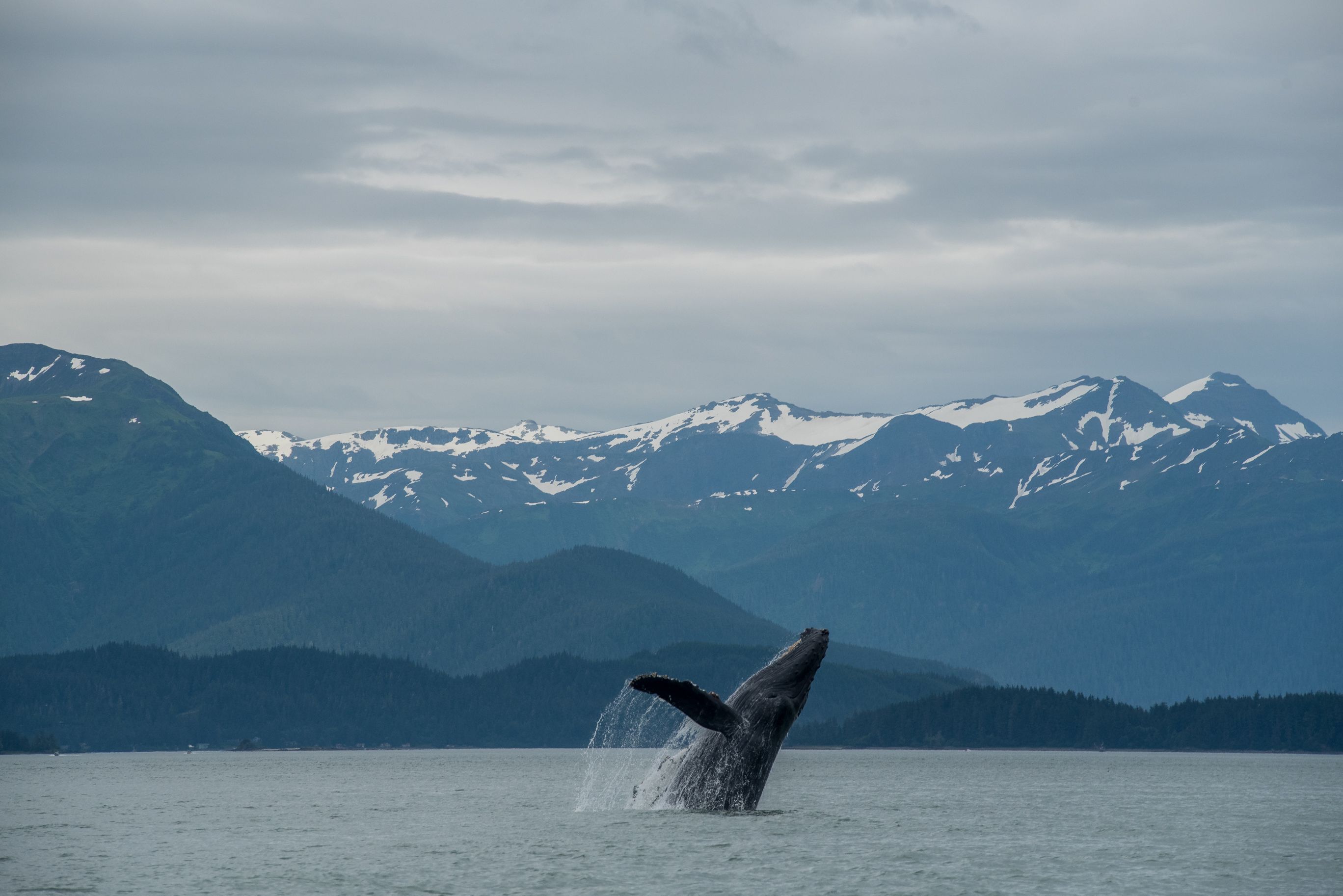 Few marine mammals are more popular than humpback whales, and these whales are one of the biggest reasons why people come to visit Southeast Alaska. Yet they come here to see the whales perform, and end up learning that the whales are in part dependent on the silt of the glaciers to survive: it’s one of the reasons that they end up coming to Alaska to feed!

The circle of life

Humans occupy a unique place in the circle of life on earth because we no longer have any natural predators. While we might have removed ourselves from the food chain, every other animal on earth needs to worry about their place in the fragile balance of life, and a look at the circle of life in the Mendenhall Valley will help us to understand that.

I don’t know what the future has in store for the planet, and I’m confident that Earth will survive, in some form. We’ll lose some species, but the planet will be OK because when one thing dies, it gives life to something else. That much is certain. The only question is, where do we plug into it all — will we be a species that survives, or dies to give life to something else?