Designated as “Forever Wild,” New York’s Adirondack Park is the largest publicly protected area in the contiguous United States. A collage of forests, sprawling wetlands, serpentine rivers, and high peaks, the park was protected in 1892 – and today, encompasses more than 6 million acres, including 1 million acres of wilderness. The mammoth park is dappled with more than 300 lakes and ponds, and perforated by nearly 6,000 miles of rivers and streams. On dry land, the protected area is traversed by more than 2,000 miles of hiking trails, and crowed by 46 summits rising above 3,800 feet – known as the park’s High Peaks. But, it’s not all wilderness.

The region also has rich history of human habitation. Mahicans and Mohawks from the Iroquois Confederacy began exploring the Adirondacks following the end of the last ice age – and human exploration continued for centuries. By the early 1900s, the region was an escape for America’s wealthiest families, including the likes of the Carnegies, Rockefellers, and Vanderbilts, who constructed opulent lodges, referred to as “Great Camps.” Many of these retreats still remain, and today, the park is a mosaic of public and private land, dotted with more than 100 historic towns and hamlets.

The region’s hodgepodge of roadless wilderness, towering peaks, and expansive waterways, all interspersed with the occasional town, also means the Adirondack Park is loaded with unique camping spots. From offshore islands to far-flung backcountry sites to beachy campgrounds spread along the region’s glassy lakes, there’s something for every type of outdoor lover – including the unwavering car campers. Here are just a few of the best places in the park to sleep under the stars. 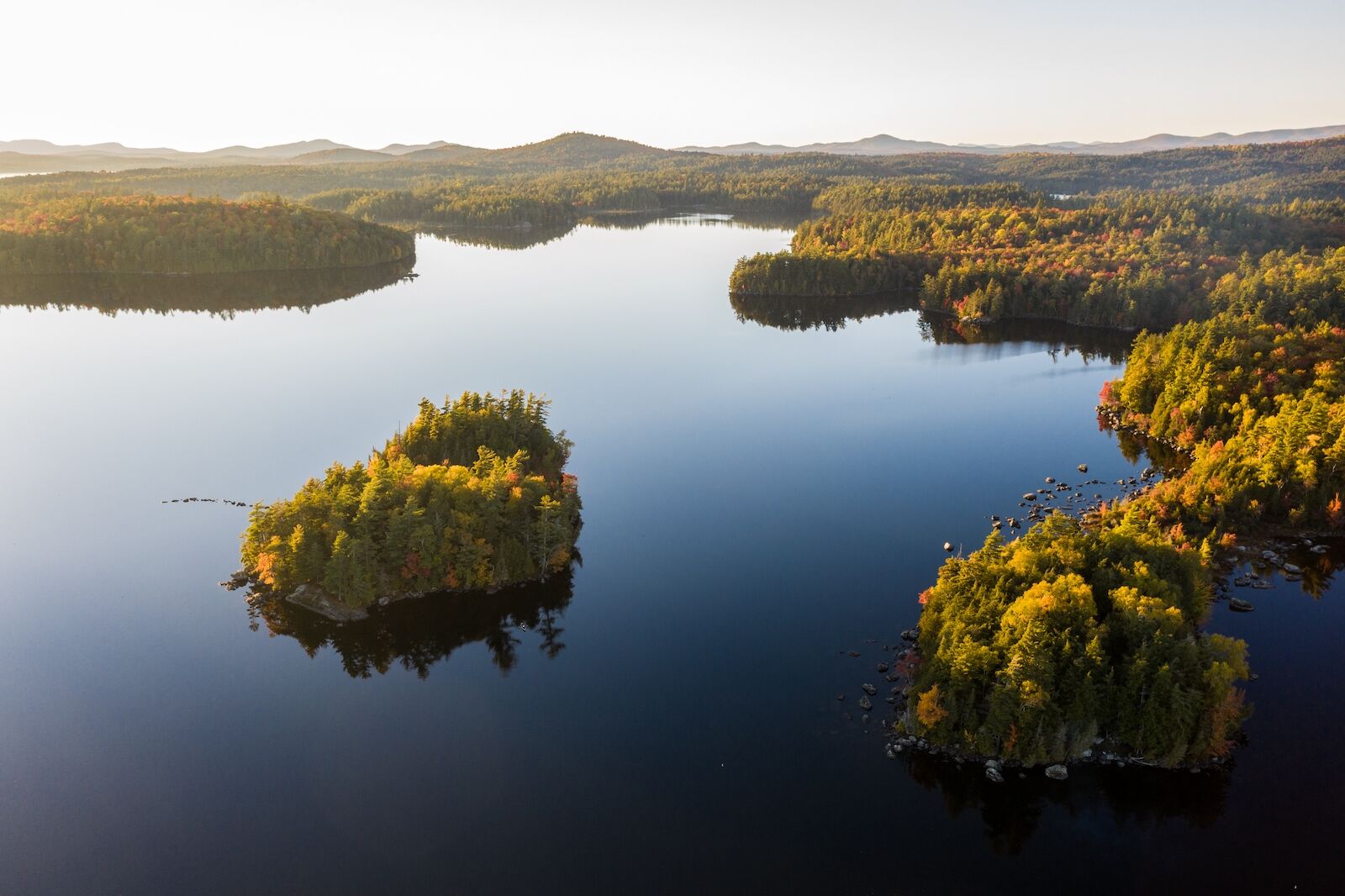 Site type: Paddle-in
Reservations and fees: $22 per night for New York residents, $27 for out of state visitors
When to go: Campground is open seasonally, from mid-May to early October

In the late 1800s, the village of Saranac Lake gained national notoriety as a retreat for tuberculosis sufferers, harboring one of the country’s first public sanatoriums, the Adirondack Cottage Sanatorium operated by Dr. Edward Trudeau. The infirmary hosted a catalog of celebrities afflicted with consumption, including novelists Robert Lewis Stevenson and Stephen Crane, and suffragist Madeline McDowell Breckinridge. At the same time, some of country’s wealthiest families – including the Guggenheims and the Rockefellers – were also building outdoorsy retreats on the chain of lakes.

These days, though, Saranac Lake is a paradise for paddlers, wedged between the High Peaks Wilderness and the Saranac Lakes Wild Forest. From the northern reaches of Upper Saranac Lake to eastern edge of Lower Saranac Lake, the chain of waterways serves up more than 17 miles of contiguous water – requiring only a single, half-mile portage. Even better, Lower and Middle Saranac Lake are peppered with 87 campsites catering just to paddlers, known collectively as the Saranac Lake Islands Campground, with spots spread along the lakeshore and interior islands. All the spots are offer fire rings and picnic tables – and the chance to drift to sleep to sound of crooning loons.

Site type: Drive-up, hike-in, and paddle-in
Reservations and fees: $18 per night for New York residents, $23 for out of state visitors
When to go: Campground is open seasonally, from late May to early October

Engulfed by the Sargent Ponds Wild Forest, the Forked Lake Campground caters to all sorts of campers. Situated a few miles outside the hamlet of Long Lake, the campground features 80 waterfront campsites – all perfect for casting for resident bass, brook trout, and landlocked salmon. Three of the campsites are situated on the lake’s islands, requiring a short paddle, and all the remaining spots are scattered along the leafy lakeshore. Three of the campsites are also reachable by car – and can accommodate recreational vehicles up to 40 feet in length. All of the spots include fire rings, picnic tables, and bear-safe boxes for storing food, along with plenty of space for hanging a hammock. For on the water adventures, the campground also rents both canoes and rowboats. 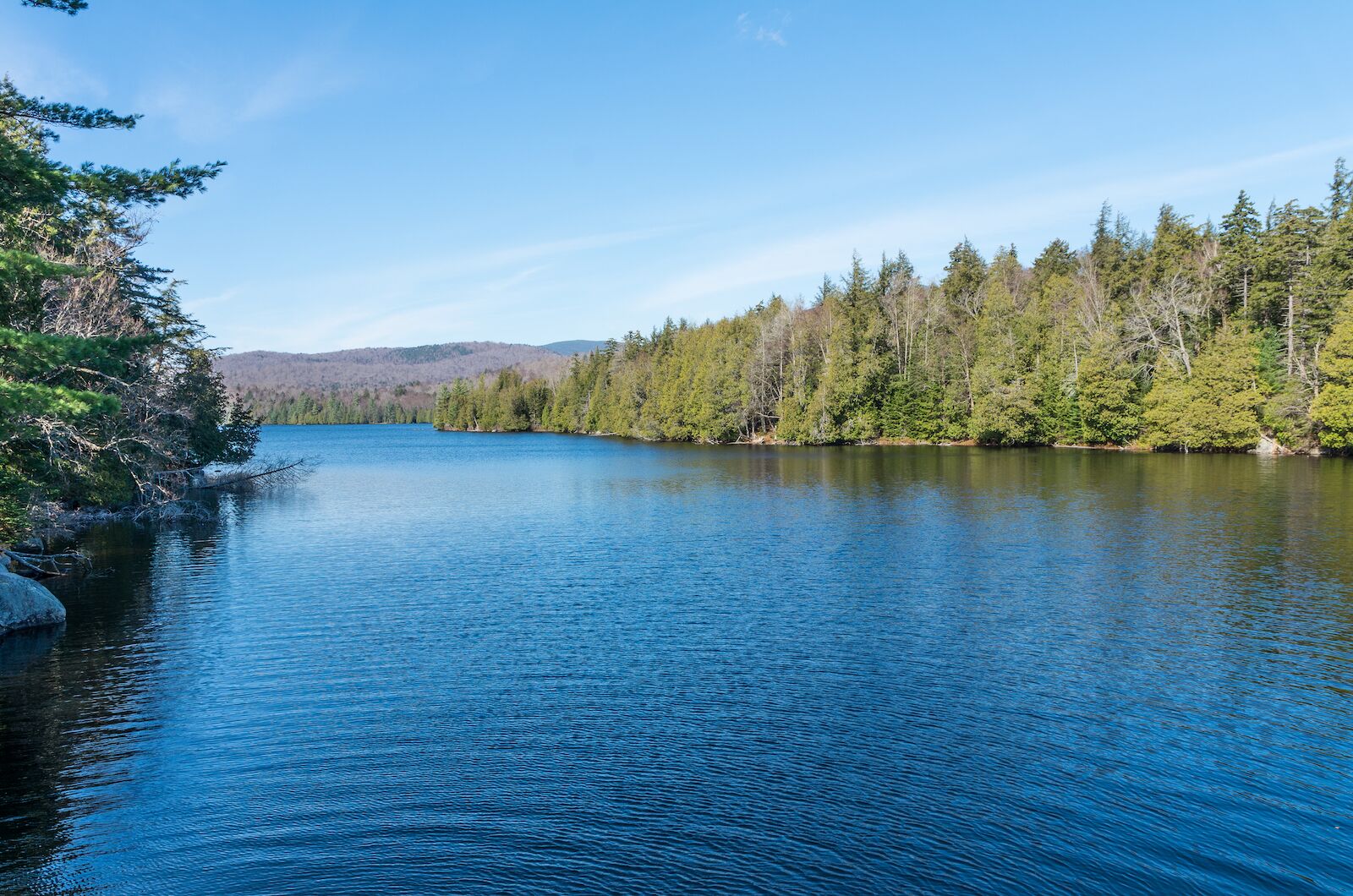 Site type: Hike, bike, ski or snowshoe in
Reservations and fees: First come, first served. Sites are free.
When to go: Historic area is open year-round, including for snowshoeing and cross country skiing

Overshadowed by the Santanoni Range, the Camp Santanoni Historic Area is anchored by one of the first Great Camps built in the Adirondacks. Constructed in the late 1800s for banker Robert Pruyn and his wife Anna, the property spreads over 13,000 acres, with Newcomb Lake as the centerpiece. A rarity in the Adirondacks, the camp’s main lodge features distinctive Japanese influence inspired by Pruyn’s time in the country, while his father was serving as Abraham Lincoln’s envoy to Japan. Owned by the Pruyn family until 1953, the property hosted a string of notable guests, including the likes of Theodore Roosevelt. Now part of the Adirondack Preserve, today the estate is still a far-flung getaway, cradled by the High Peaks Wilderness, the largest wilderness in the state of New York.

While the lodge no longer caters to overnight guests, campers can still get a taste of the storied estate at one of eight primitive campsites scattered around the property – five along the Newcomb Lake Road Trail, and three situated beside Newcomb Lake. Just remember, reaching the main lodge area requires a 4.5-mile hike or bike ride from the trailhead on Route 28, courtesy of a historic carriage road. Of course, in a nod to the Gilded Age, visitors can also arrive in a horse-drawn carriage, with rides offered by Newcombe Farm (reservations are required). 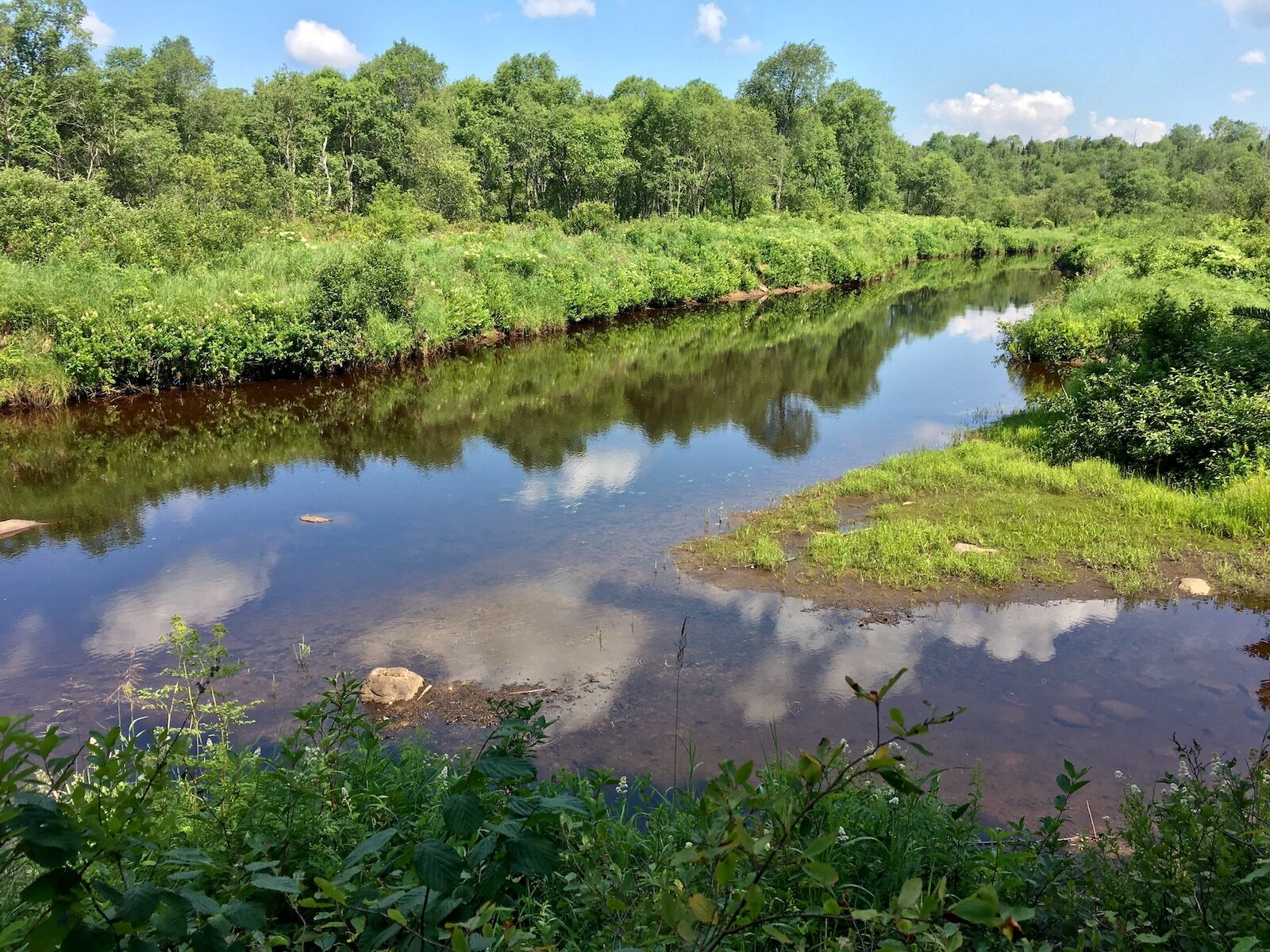 Part of the Adirondack Forest Preserve, the Moose River Plains Complex provides plenty of opportunity to spot to park’s largest ungulates. Offering access to more than 60 lakes and ponds, the complex has almost unlimited fodder for browsing moose – along with black bears, river otters, and white-tailed deer.

There’s also plenty to lure hikers, cyclists, and anglers. More than three dozen trails traverse the complex, including the 133 mile Northville Placid Trail. For gravel grinders, the 22 mile Limekiln Lake-Cedar River Road is a popular seasonal cycling route – and the Moose River Plains Complex also provides the backdrop for the annual Black Fly Challenge, containing about half of the race’s 40 mile course.

Best of all, for campers hauling bulky gear – like bikes or kayaks – the complex offers 116 drive-up campsites, spread along the Moose River Plains Camping Corridor. Most of the campsites feature picnic tables, fire rings, and primitive privy pits. Eight of the campsites are also designed to be accessible to campers of all abilities, and the Moose River Plains Complex also offers a handful of accessible hiking trails and soft launches for paddlers. 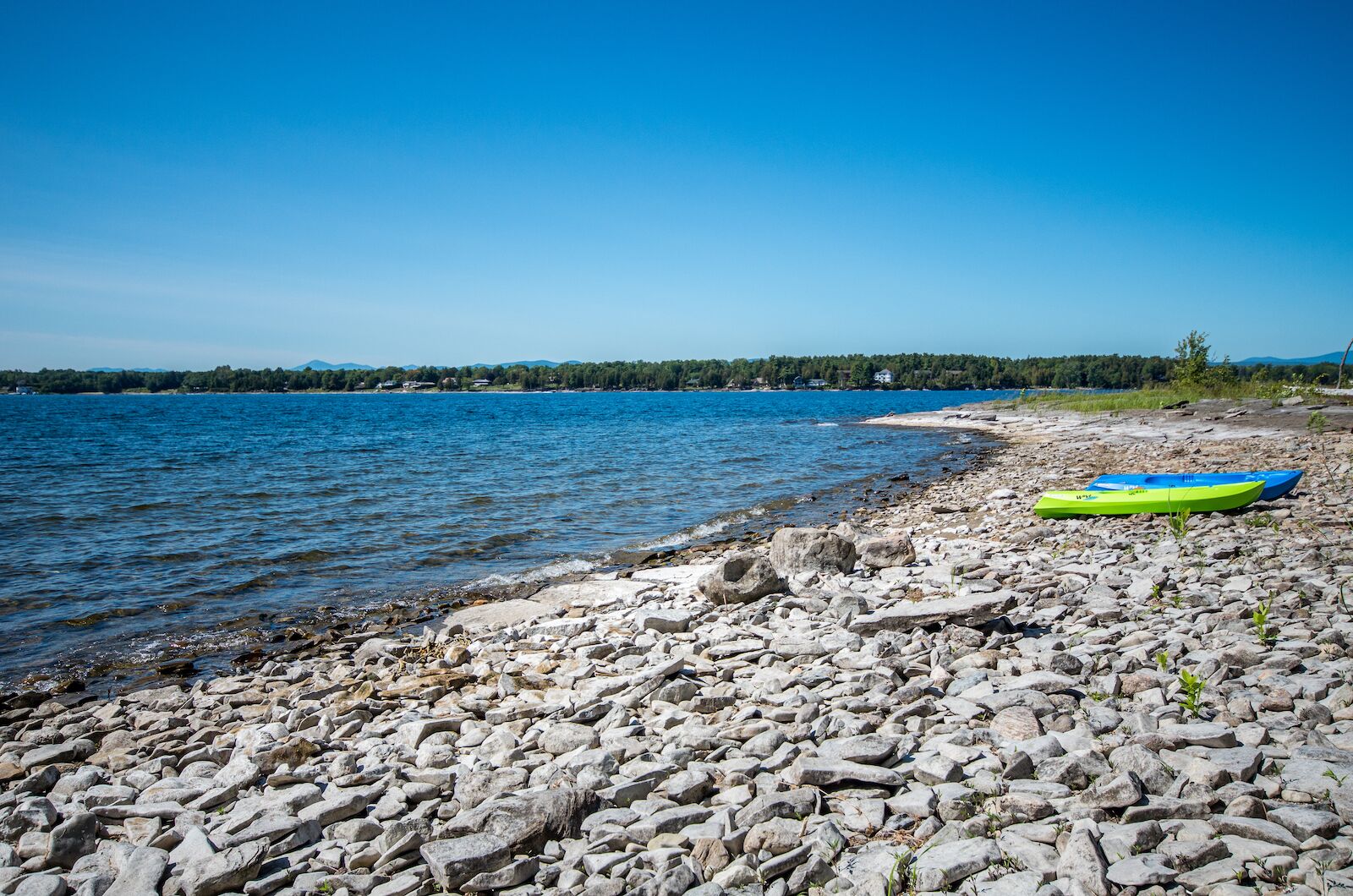 Site type: Paddle-in
Reservations and fees: First come, first served. Sites are a free, but a permit is required.
When to go: Complex is open year-round for recreation, but state boat docks are removed from October to May (and historically, Lake Champlain freezes completely about every four years)

The lowest point in the Adirondacks, Lake Champlain forms the eastern edge of the park, shared by New York and Vermont. The sixth largest lake in the United States is akin to an inland sea speckled with more than 70 islands, and offering some of the more spectacular offshore campsites in the Adirondacks. In the park, Valcour Island and smaller Schuyler Island – atolls both associated with fiery naval battles during the American Revolution – are now sprinkled with secluded campsites just for paddlers.

Valcour Island offers 29 primitive campsites, and Schulyler Island features three – all part of the Lake Champlain Islands Complex. On dry land, Valcour Island is also etched with 12 miles of trails, including a nine-mile circuit around entire atoll. Both islands are also stops along the Lake Champlain Paddlers Trail, a paddling route linking destinations in New York and Vermont, including more than 600 waterside campsites. While sleeping beside the water, there’s also ample time to ponder the existence of the lake’s most illustrious resident – a storied leviathan nicknamed Champ, first reported in the early 1600s. 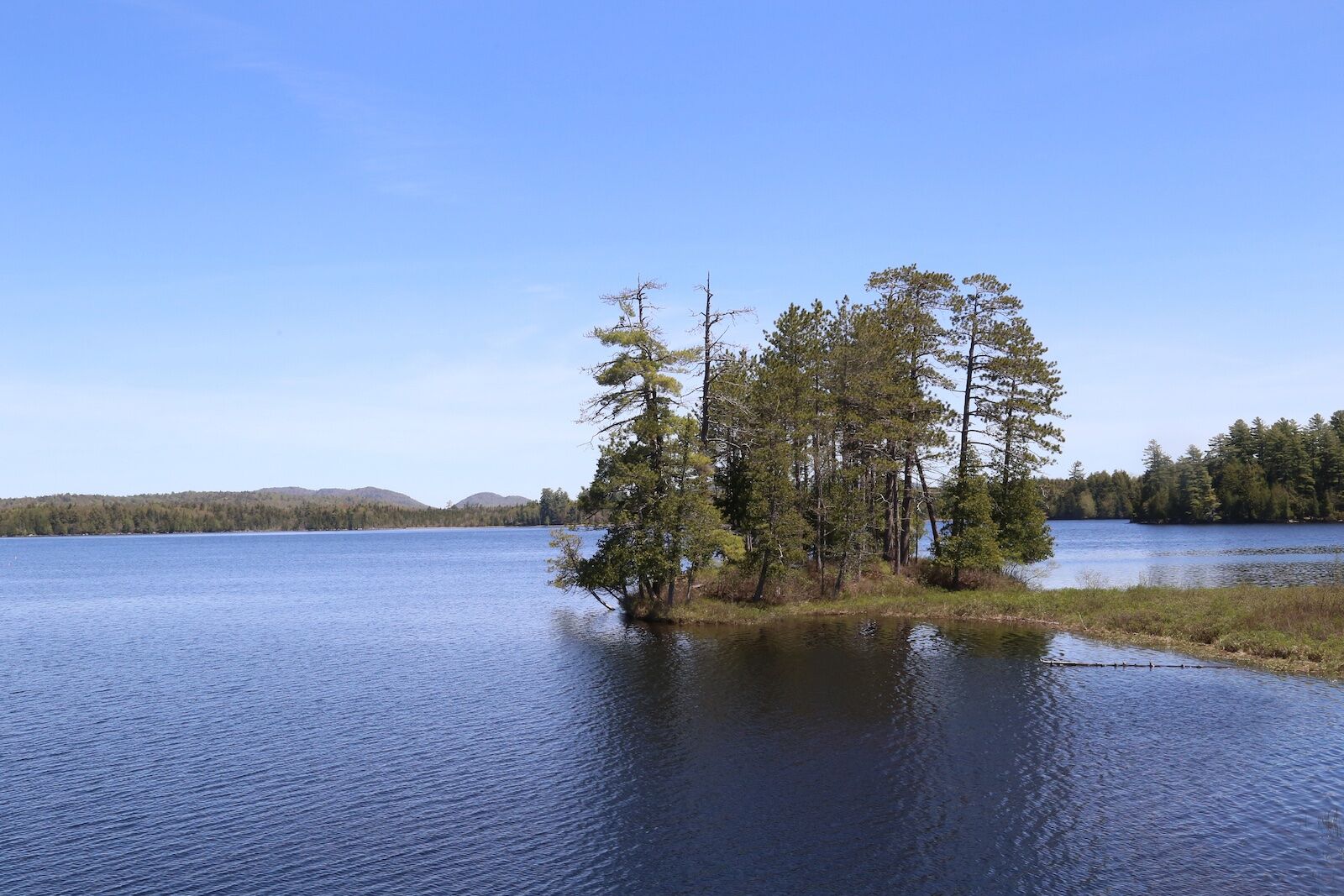 Site type: Paddle-in
Reservations and fees: $18 per night for New York residents, $23 for out-of-state visitors
When to Go: Campground is open seasonally, from late May to early September

A three-mile paddle from the boat launch in Raquette Lake, the Tioga Point Campground spreads over a peninsula used as a summer camp in the early 1950s. Now, the bunkhouses and cabins are long gone – and instead, the promontory is dotted with 25 primitive campsites, including 15 with wooden lean-tos. All the sites feature fire pits, picnic tables, and primitive privies. On land, the Tioga Point Trail connects campers to the Sargent Ponds Wild Forest, and the campground is also situated along the 90 mile Adirondack Canoe Route, a portion of Northern Forest Canoe Trail, a 740-mile paddling route stretching from New York to Maine.

National ParksIt’s Time for the Adirondacks To Get the Respect They Deserve
Tagged
Camping New York, United States
What did you think of this story?
Meh
Good
Awesome

New York Has 180 State Parks, but These Are the 10 Best
How To Make the Most of Your Day at New York City’s Museum of Sex
Here’s Why 18 Miles of Fishing Line Circles Above the Streets of Manhattan