At 40,000 feet, even little plastic bottles of mid-shelf liquor feel like a treat. Yet just when it seemed like the era of in-flight craft and draught beers, quality wines, and artisan cocktails might finally be upon us, a new trend is threatening to disrupt the efforts airlines have made to revamp beverage services over the last decade: alcohol bans.

Boozing is a big part of the flying ritual for many travelers, from pre-flight cocktails to wine pairings with in-flight meals. First- and business-class passengers might expect to be greeted with a glass of bubbly on long-haul flights, while the promise of ordering a drink from the discomfort of an economy seat is one of the few remaining luxuries for the average traveler.

Airlines recognize the demand for better in-flight drinks. Several have partnered with alcohol brands to perfect their beverage services. Hawaiian Airlines serves a trio of tropical bottled cocktails crafted exclusively for the airline by On The Rocks Premium Cocktails. Scandinavian Airlines and Danish brewer Mikkeller have teamed up multiple times to create specialty beers designed to be enjoyed at altitude. The Dutch and Hong Kong flag carriers, KLM and Cathay Pacific, have also trialed partnerships with Heineken and Hong Kong Beer Co, respectively.

Many airlines have also invested in wine programs by enlisting the help of sommeliers and experts to craft refined wine menus. Master of Wine Jeannie Cho Lee, for example, is one of three consultants responsible for managing the wine service at Singapore Airlines, which also employs a crew of what the company calls “air sommeliers” to help passengers order the right wine mid-flight.

The success of these beverage programs has varied. Where Singapore Airlines has steadily evolved its wine service to reflect different routes and regional cuisines, Cathay Pacific’s Betsy pale ale, which was handcrafted to taste best at 35,000 feet, has had a start-and-stop run. These hiccups are understandable. Beyond practical considerations such as volume, storage, and supply chain, airline beverage programs have to contend with the ways in which flying impacts the way passengers actually experience their drinks.

“First is your physiological state at high altitude,” says Lee, which covers everything from being dehydrated, tired, and stressed to each individual’s physical condition. “Then there’s the air pressure, the cabin temperature, and the environment.”

As these factors do a number on the wine as well as your body, the end result is that “the wine’s structure, rather than the flavors, tend to be more prominent in the air.” Accordingly, the natural acidity of a white wine like Chablis is exaggerated while the tannins in red wines become harsher, pointing airlines toward more velvety, softer, rounder reds, Lee explains. 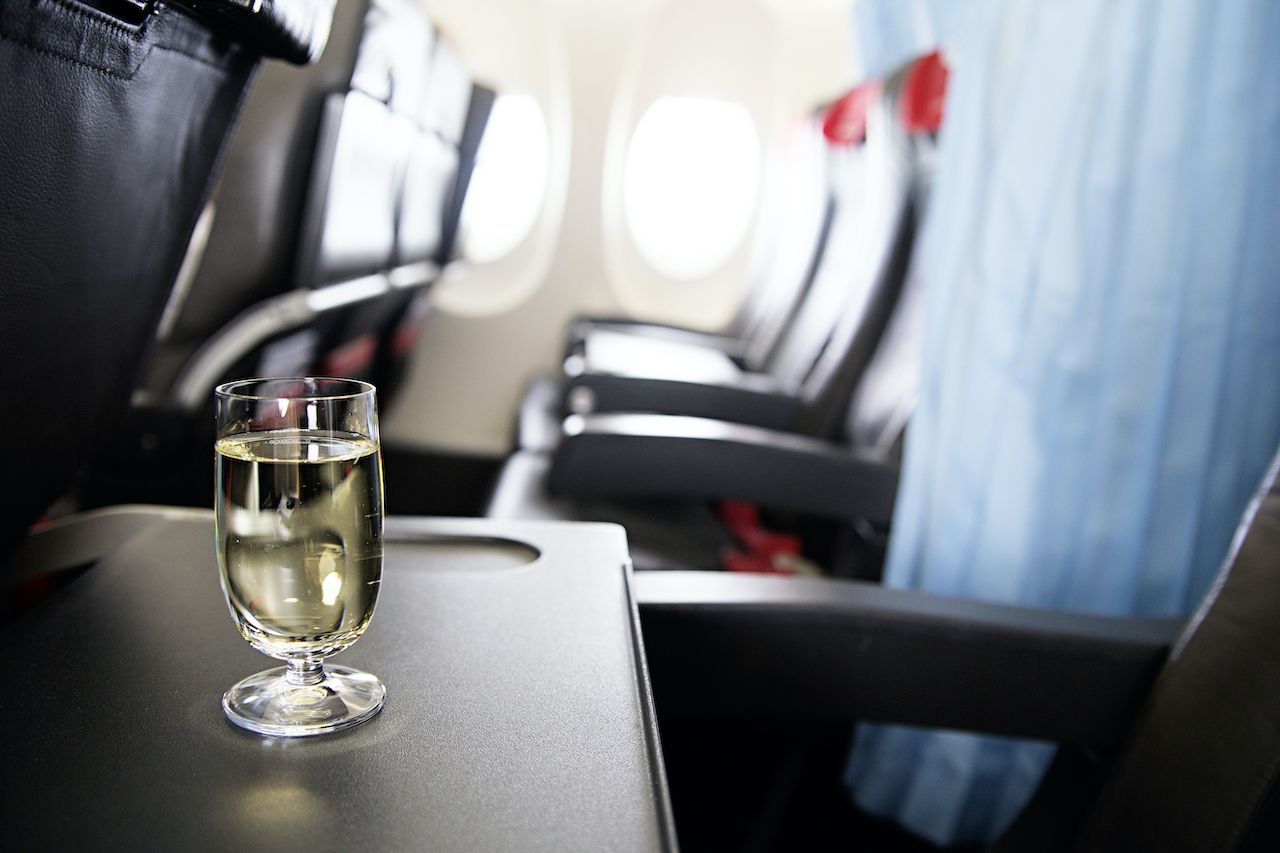 Crafting in-flight drinking and dining programs that can stand up to flying fatigue and dulled taste buds is an uphill battle for airlines. A year of limited flights, and the cancellation of beverage programs on flights that were running, could make that battle even steeper. Unlike meal services, many of which have received Michelin-chef makeovers in recent years, alcoholic beverages are not essential fare — and they’re often linked to disruptive incidents onboard, a phenomenon that’s spiked this year.

Since the start of 2021, airline trends have shown two things: a surge of bookings following the pandemic-induced travel drought, and a spike in unruly passenger behavior, from objections to mask-wearing and social distancing to outright violence.

Following an altercation between a Southwest Airlines flight attendant and an inebriated passenger last month, which resulted in the flight attendant losing two teeth, the airline announced that it would be suspending its newly resumed alcohol sales. American Airlines quickly followed suit, deciding to ban mid-flight alcohol sales in its economy cabins until at least mid-September. This ban does not apply to first- or business-class travelers.

United, which had previously announced plans to resume its alcohol service on flights of 200 miles or more, has opted for a more vigilant reintroduction that begins with longer flights. At present, the airline plans to limit beer, wine, and hard seltzer offerings to domestic flights that exceed 800 miles and hub-to-hub flights.

Though the current airline alcohol bans are neither permanent nor ubiquitous, the idea has been gaining traction. Sara Nelson, the international president of the Association of Flight Attendants-CWA, has even advocated for federal intervention.

“The incidents of violence on planes is out of control, and alcohol is often a contributor,” she said in a statement earlier this month. “The federal government should provide guidance to airlines and airports on pausing alcohol sales for a period of time. We should do everything in our power to remove contributors to the problem.”

Others have questioned the bans, noting the fact that a majority of the incidents reported this year occurred when both food and beverage services were suspended due to the pandemic.

A lot remains to be seen about the future of post-pandemic flying. The future of quality in-flight drinking appears equally uncertain. At the very least, it’s safe to assume that the efforts airlines were starting to make to perfect the plane-ready beverage will be on hold indefinitely, much to the dismay of travelers who take pleasure in sipping drinks while cruising over the cloud line.

As for the possibility that we might be entering an era of in-flight prohibition, Lee said it best when asked to envision a world in which wine would no longer be served alongside meals on long-haul flights: “That would be a very sad day if that happens.”