You can circumnavigate the island of Kauai in just over two hours — well, the parts that have a road, that is. About a fifth of the shoreline isn’t reachable by car at all. But the point is, the island isn’t that big a place. Yet it still has a surprising stash of beaches that most visitors will never see. Getting to them involves varying degrees of difficulty — either for your car or for yourself — but the reward is worth the trek. 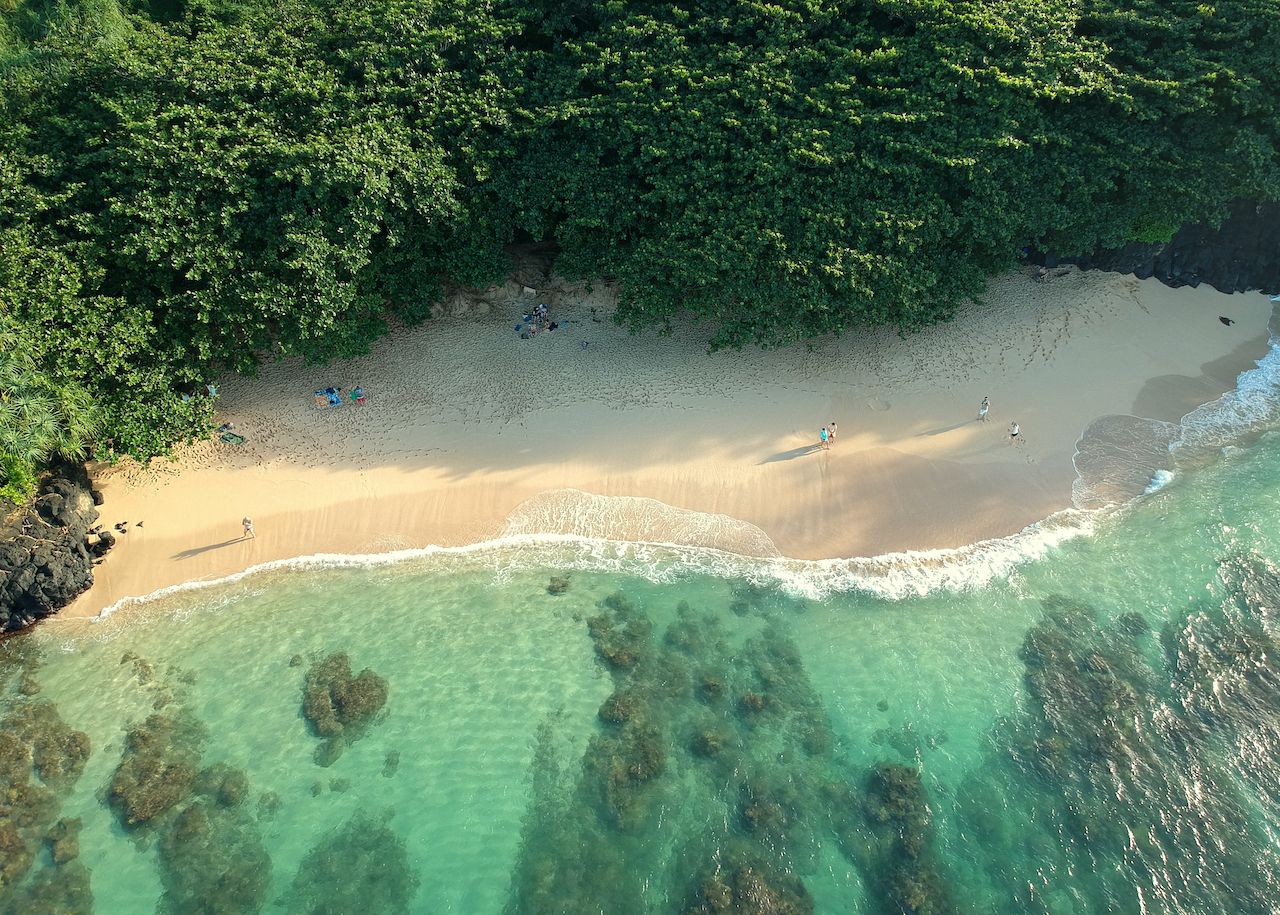 You’d think that a beach with such a provocative name would be a poorly kept secret. But what keeps the crowds away is that this beach is hard to find and even harder to reach. Deep in the manicured Princeville area, just by the St. Regis is a tiny parking lot with so few spots you may have to wait for one. After parking, you scale a cliffside in the form of broken steps, rusted guardrails, and dirt, death-gripping oddly placed slack ropes as you go.

When you get to this tucked sliver of sand canopied by lush greenery, the cliffs rising up behind it, you’ll know that waiting to park and descending a cliff in your flip flops was worth it. Bring snorkel gear, rented in Hanalei, as this is one of the best snorkeling spots in Kauai. While you’re out in the water, you can even swim over to Pali Ke Kua Beach, an even less accessible, and equally Edenic, cove. 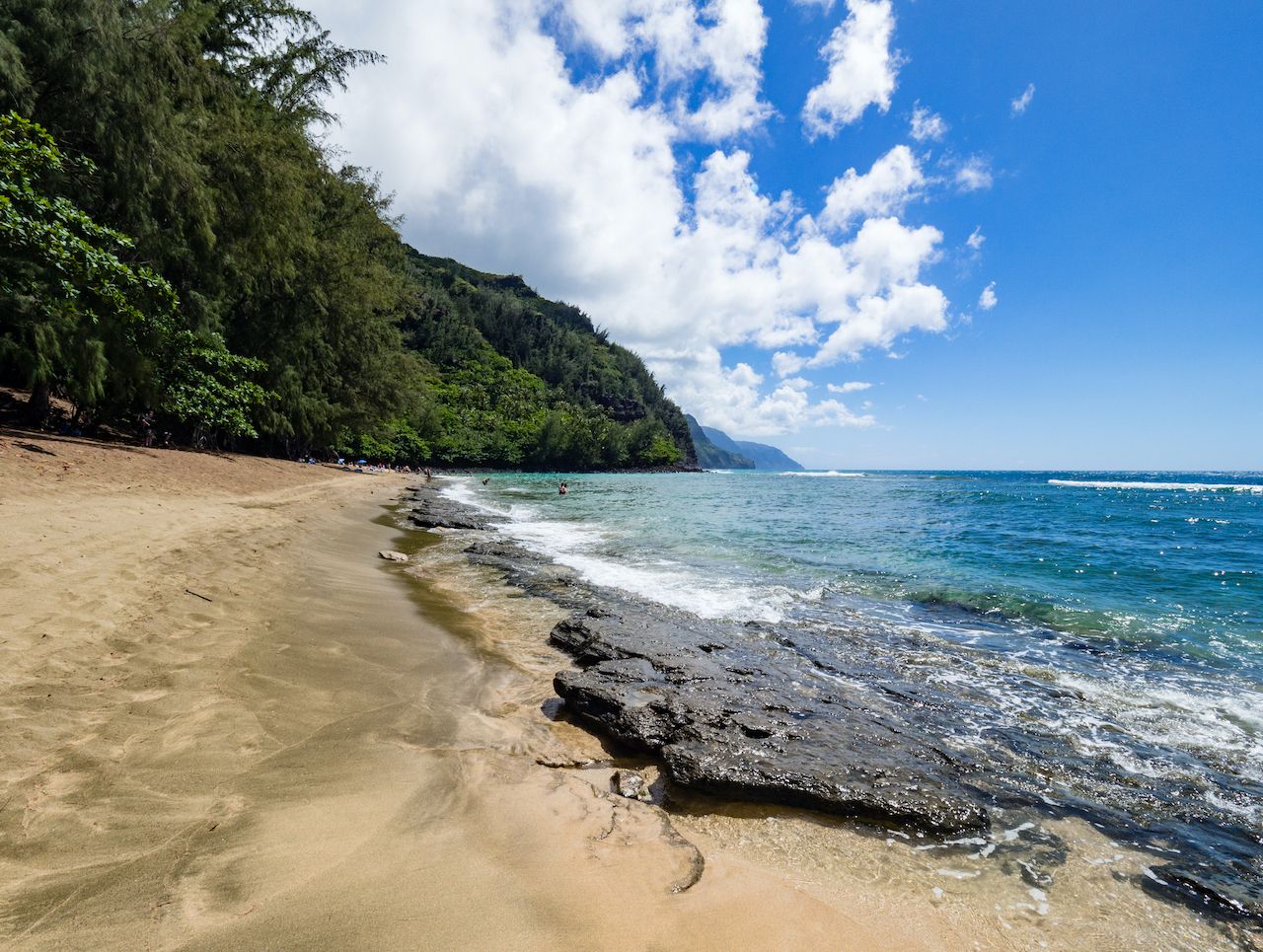 With a name like Secret Beach, or simply Secrets, the piece of shoreline known in Hawaiian as Kauapea Beach is sure to attract interest. But good luck finding the long path through the greenery down to the beach, as there’s no signage. Once you do get to the sand, you’ll find very few people. Don’t be surprised, though, if further down the beach you spot a few sunbathers who won’t be worrying about tan lines — as a part of this beach is for those who feel even bikinis and speedos provide too much coverage. While swimming at Secrets is not recommended most of the time given the rough current, there are tidal pools at the far end of the beach that are perfect for a cooling-off dip. 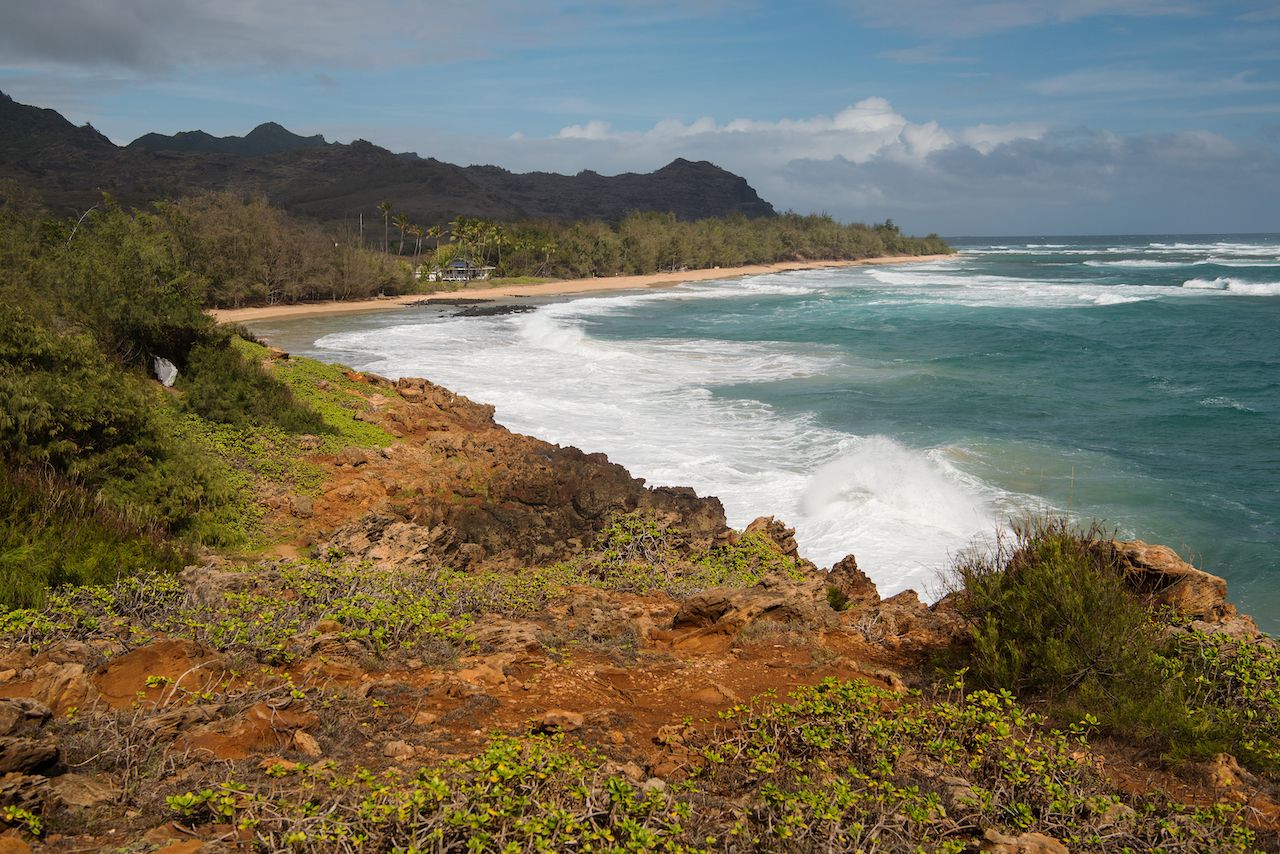 Drive due east from Poipu, on the southern tip of the island, and keep going past the Grand Hyatt Kauai Resort. The paved road will give way to a dirt road, but you should keep going, even as the potholes seem to grow ever larger. The one time you should consider turning back is after a heavy rain when some potholes turn into miniature lakes. Go left at the Y intersection and right at the later T intersection. The whole distance is 2.5 miles and may well be prohibited by your car rental contract since the road is unpaved. It’s your call, but the beach is a beauty. Just sayin’.

When you do get to the parking lot, park and walk through the trees to a long, narrow beach framed by pines. This is not the place to go for a long swim, as it’s rocky. But the pines provide plenty of shade, so you can while away the hours. And it is possible to take a dip at the water’s edge. Gillin’s is close to the resorts and condos of the South Shore but feels a world away. 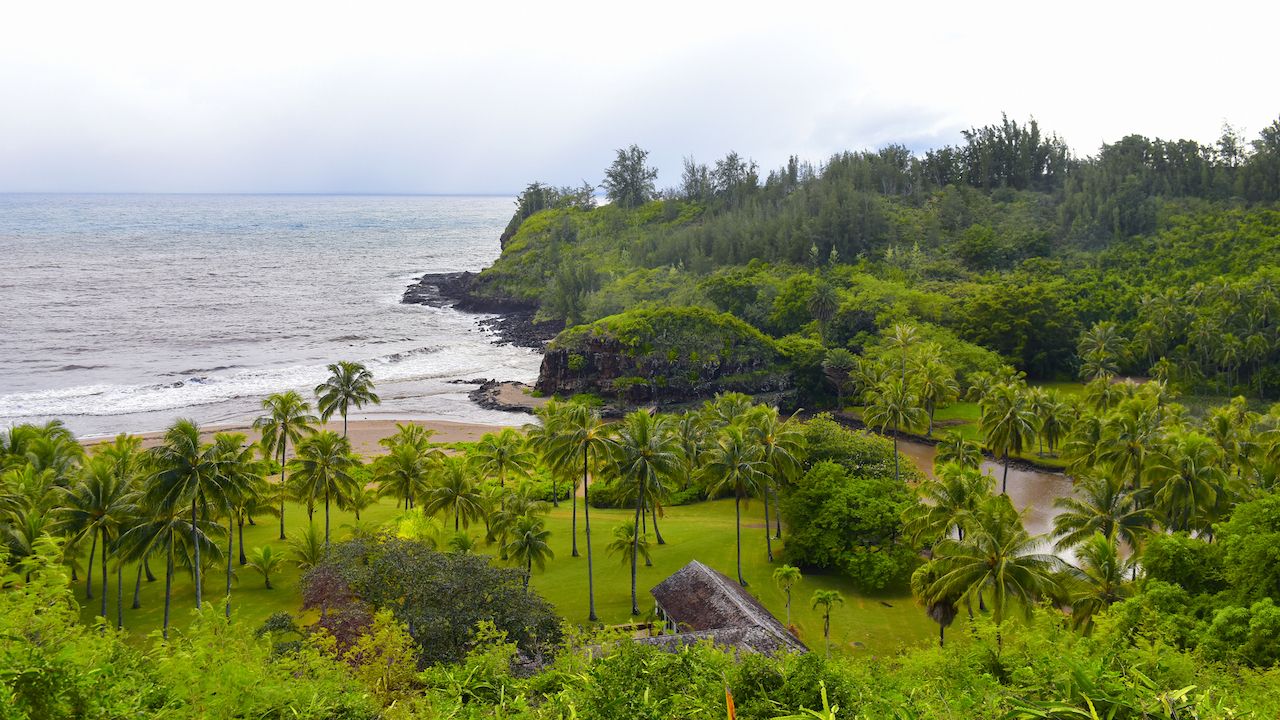 To access the beach at Lawai Bay, drive past Spouting Horn towards Allerton Garden. You’ll need to stop outside a gate that’s usually closed, and walk on a stone wall around it. Then you’ll trek through an overgrown path along a cliff, cursing the fact that you brought so much stuff. Just when you think you’re lost, you’ll see a stunning crescent-shaped beach. Get settled and enjoy the scenery.

You’ll see local kids on boogie boards, literally spinning upside down inside what surfers call a “terminal barrel.” Best not to include a boogie board of your own in the collection of stuff you drag to the beach, though. This is a shore-break wave that can do some damage to anyone but an expert boogie boarder. 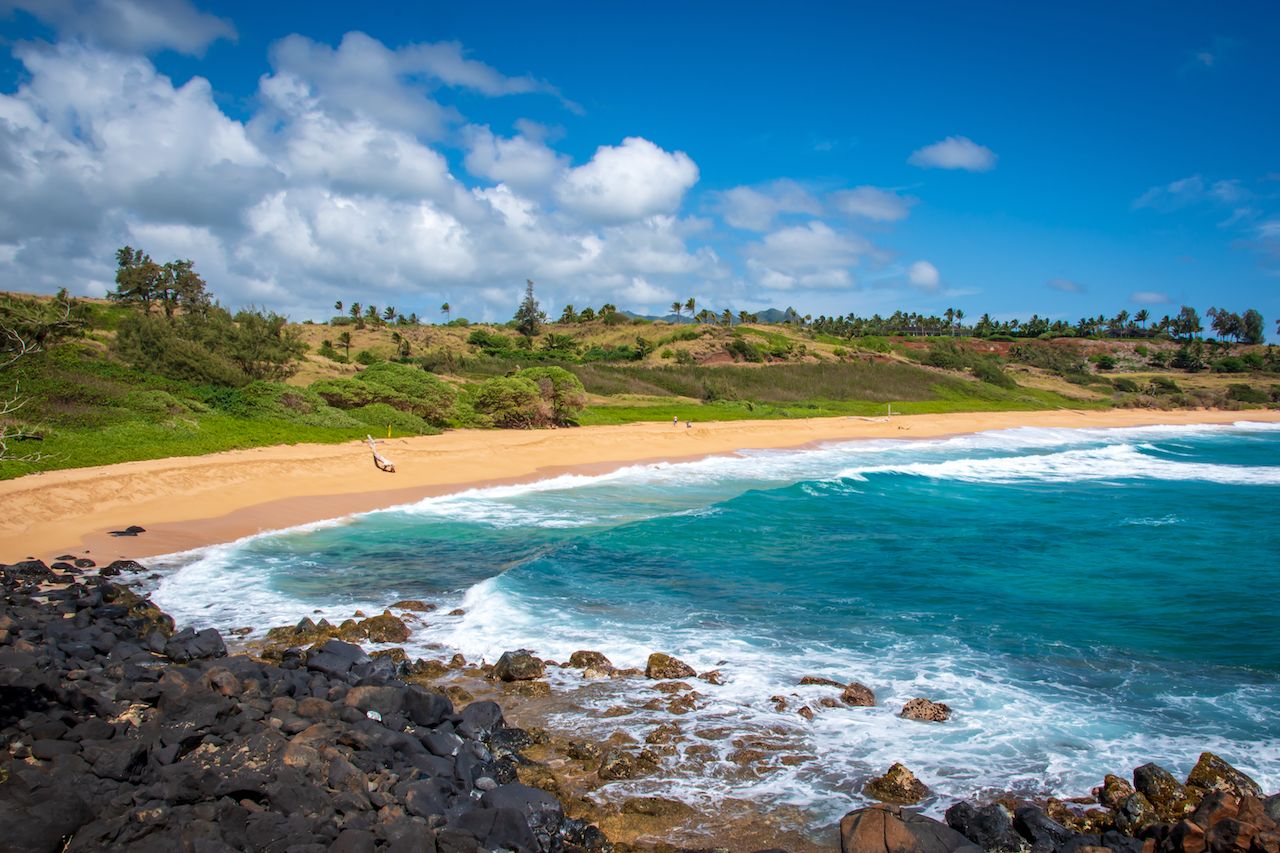 Paliku Beach is known to some as Donkey Beach — supposedly so-named for the mules that hauled sugar cane from the fields out to the water. The waters here are pretty rough, so it’s not a place to go and hang out all day with the kids. But it is secluded and usually very empty. Although the parking lot is right off the highway, the walk to the beach is at least 10 minutes long. A more fun option is to arrive via the Kauai Multiuse Path, which is a lovely paved biking and walking path that runs up the island’s east side. Rent beach cruisers at Hele On Kauai for $15/day and ride the three miles up to this beach. Bikes come with baskets or bags, but if you’ve opted to rent a cooler attached to the back of the bike, you could plan to picnic by this secluded spot.

There are plenty of other tucked-away beaches in Kauai that are not quite as hard to get to as this one, which we didn’t list here because the effort-reward quotient isn’t quite right. Kalalau Beach, though, is really worth the 11-mile hike to get there. Not just because the beach itself is a slice of paradise, complete with a cascading waterfall as a backdrop, but because the path to get there is one of the most stunning hikes in the country. The famed Kalalau Trail along the Na Pali cliffs is open again following serious storm damage a while back, but be sure to check opening schedules before you go, as it can close due to rain or hurricane forecasts. Also note that if a boat operator offers to drop you off at Kalalau Beach, turn them down. It’s illegal and shouldn’t be encouraged — no matter how tempting.