Few things feel more like a Southern cliché than sitting on a rocking chair with a glass of ice-cold sweet tea while looking at the Mississippi River from the deck of a paddlewheel steamboat. And I, a French, along with my partner, a Canadian, embraced it wholeheartedly. To add another layer of Americana, it was July 5, and the vessel, the iconic American Queen, and most of its passengers were still festooned in red, white, and blue the day after the Fourth of July. 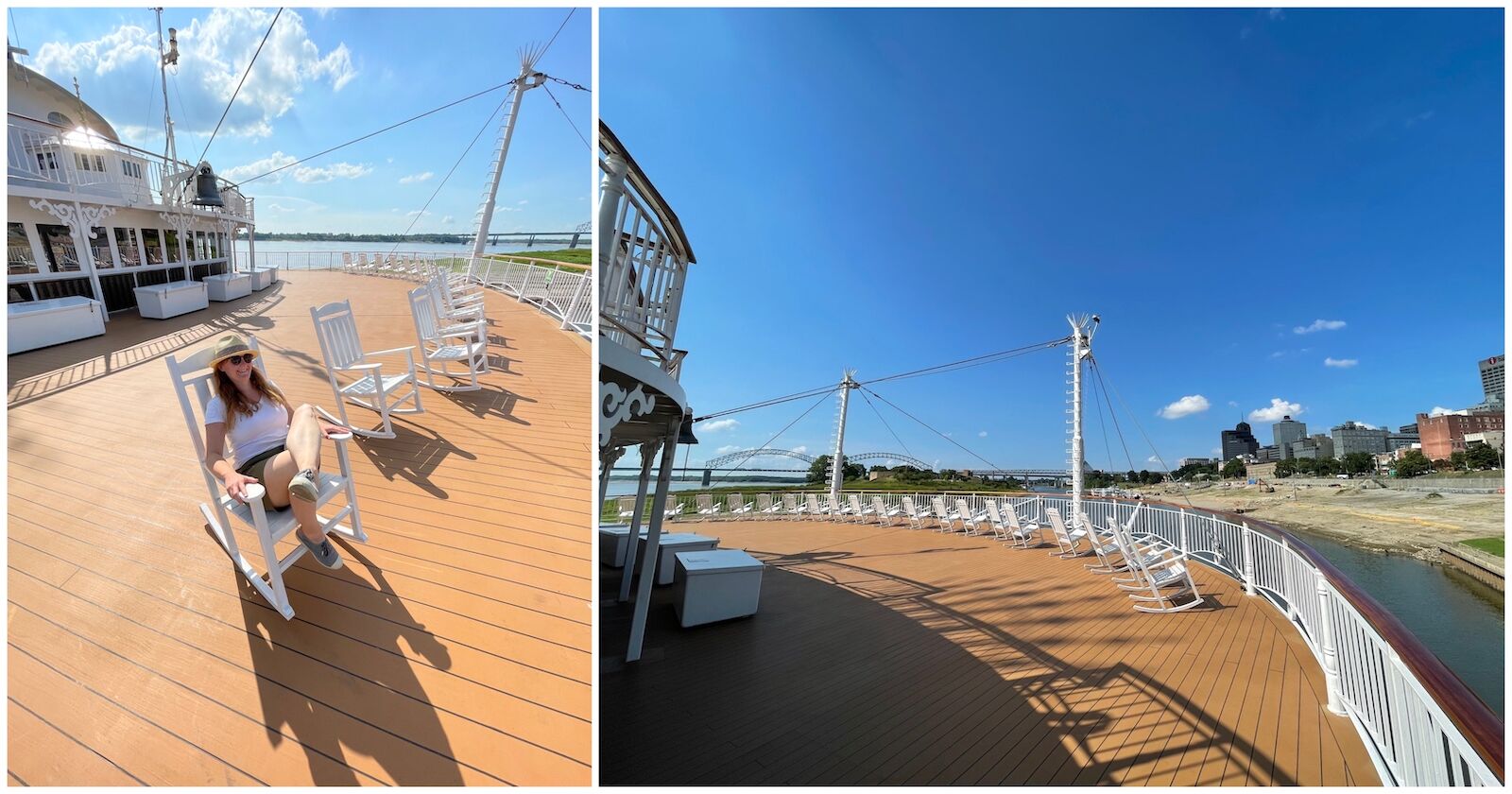 The American Queen, a picture-perfect 1995 recreation of a Mississippi River paddlewheel steamboat, took us from Memphis to Nashville. The full journey took nine days to cover less than 200 miles. Granted, we stopped along the way, but still, this is slow travel taken to the extreme. Obviously, nobody on board would have it any other way — we had nine days of great food, free drinks, river lectures, music, excursions, and brand-new (to us, at least) scenery to look forward to — all in a luxurious time capsule. The pilots could take it as slow as they needed.

The American Queen steamboat is not your average river cruise ship 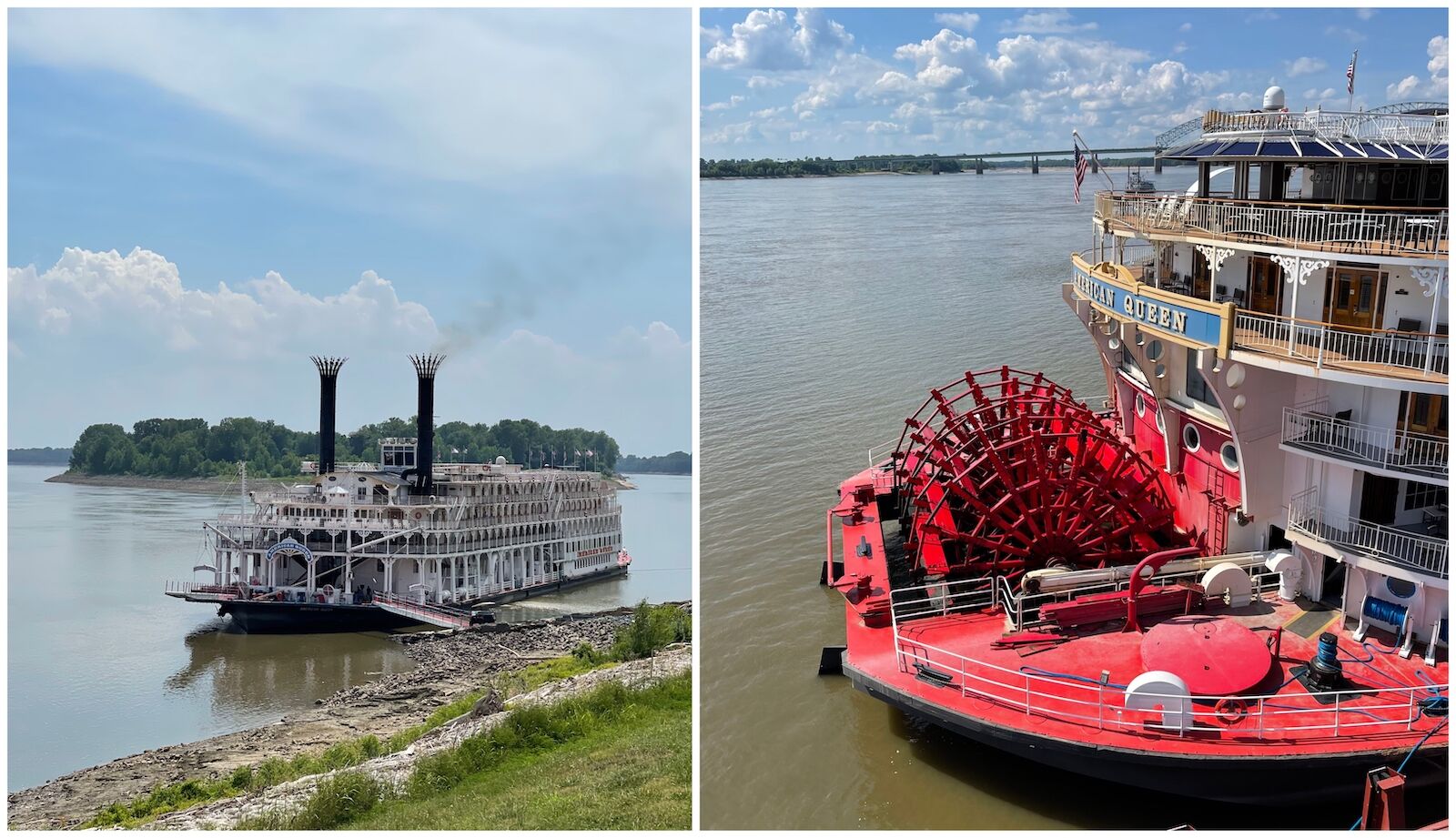 A cruise on the Mississippi River is one thing, but a cruise on the emblematic American Queen is another deal entirely — it is undeniably the largest and fanciest steamboat ever built. Modeled after two luxurious steamboats from the 19th century (the Grand Republic for the elegant exterior, and the J.M. White for the opulent decorations and furnishings inside) the American Queen is very grand. Yet, despite the Tiffany lamps, the grand pianos, and the dress code in the main dining room, the crew and the passengers are relaxed and appreciative of the beauty of the vessel rather than stiff-necked and uncomfortable at the lavish displays. 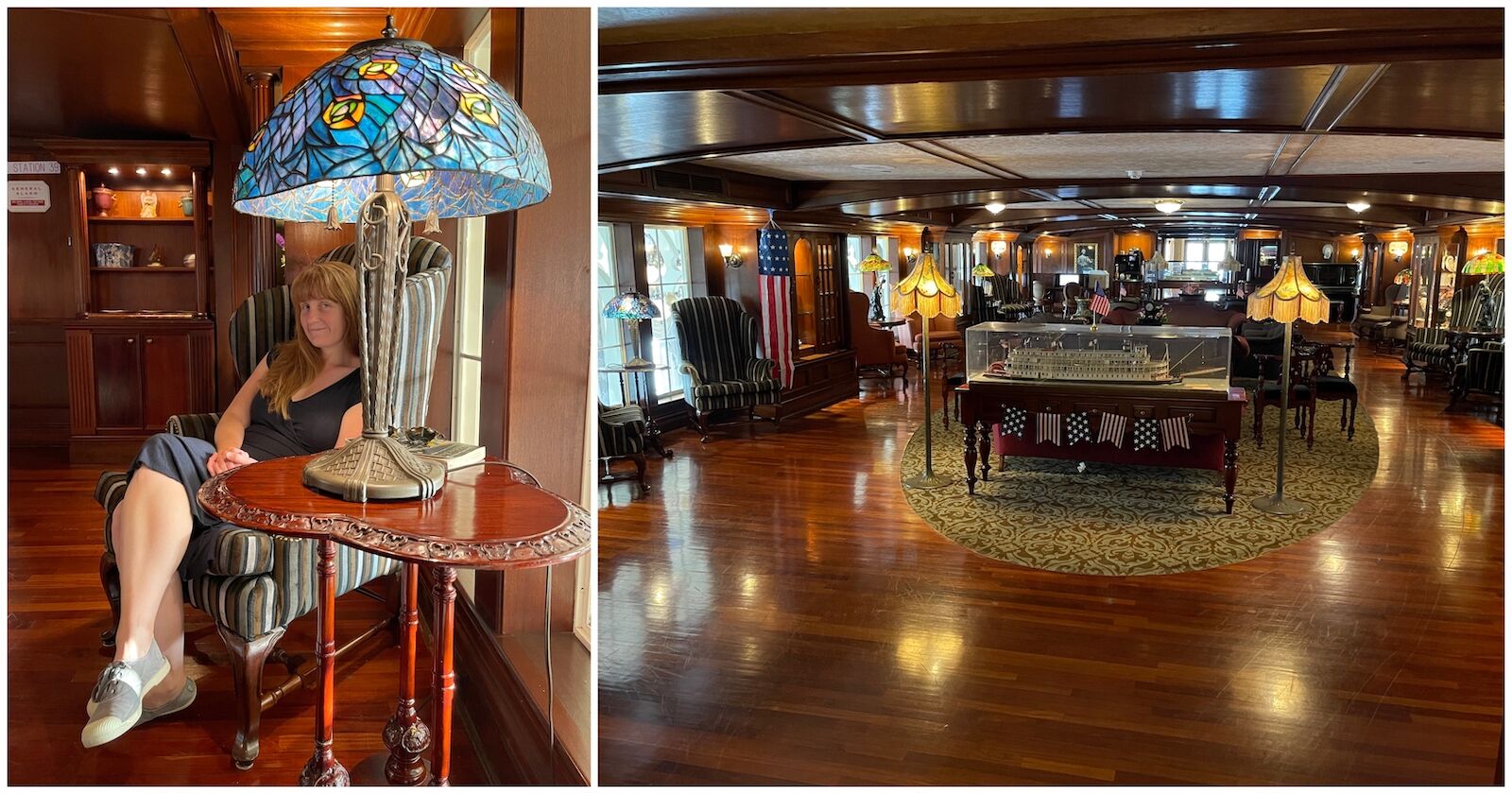 The Mark Twain room is the most opulent room on the American Queen. Photo: Jesse Adams

The cruise company, American Queen Voyages, has three more steamboats in its fleet: the American Countess, the American Duchess, and the American Empress. And while the boats may all look the part from afar, they cannot hold a candle to the American Queen. Passengers who had journeyed on several of the company’s steamboats made clear to us that they would not cruise on any other vessel than the American Queen, and after we got a good look at the American Countess while we were anchored in the port of Paducah, Kentucky, we agreed. It looked nowhere near as dignified or as old-timey as our boat. And I must admit that our feeling of superiority and pride at sojourning on the most sumptuous vessel to ever travel on the Mississippi was certainly reinforced by the people who stood on the banks to take photographs and wave at us everywhere we went.

The rooms and amenities on the American Queen

With 222 cabins spread out over six decks, the American Queen can accommodate 417 passengers and 172 crew members. While we were on board, the vessel was filled to only a little more than 50 percent of its capacity, making for a lot of room to roam and an extremely attentive crew. 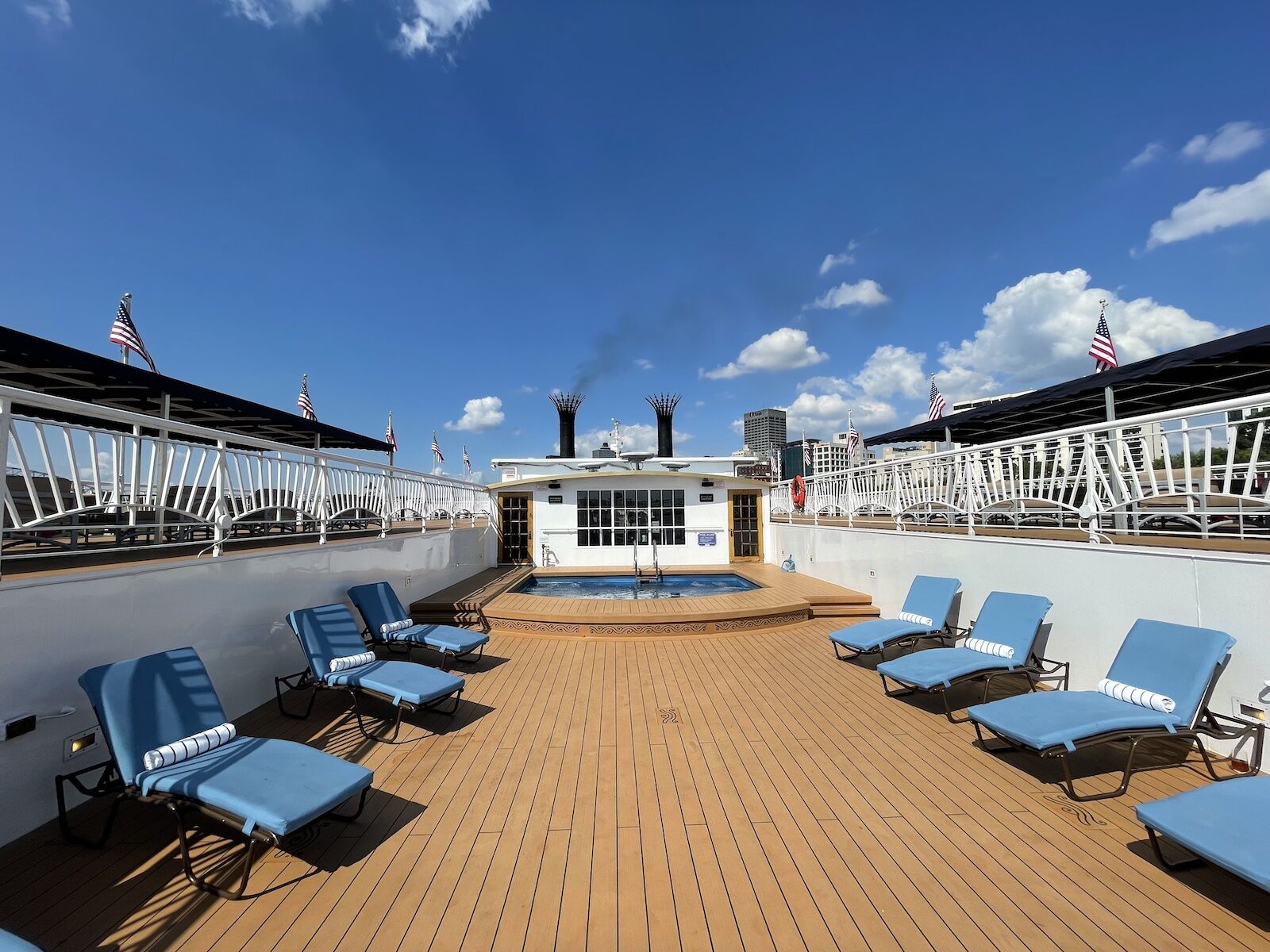 Beyond having crew members devoted to your every need and whims, the vessel itself makes passengers feel at ease all the time. The relentless heat and humidity of the South is soothed by the constant AC; the food is ever present whether you feel like having soft serve ice cream, popcorn, biscuits, tea, coffee, or cocktails throughout the day; the pool and cozy lounge chairs on deck six seem always empty, ready to welcome you; and the rooms are cleaned to perfection twice a day. If it’s a restful vacation you’re after, there are fewer better options.

On vacation aboard the American Queen, you can do lots or do very little

You’re onboard this amazing vessel to chill out, and if you wish you can do that and only that. You can sit by the pool with a cocktail all day long and book an appointment at the spa when you feel like being pampered. But if you want to get to know the region you’re traversing, there are excellent excursions just about every day.

Excursions from the American Queen are done via comfy, air-conditioned hop-on hop-off buses with knowledgeable tour guides. That said, if the vessel sets anchors close to where the excursion takes place, you’re under no obligation to ride the bus or visit the places selected, you can just walk off using the gangway and do your own thing — as long as you’re back before the deadline given to you. 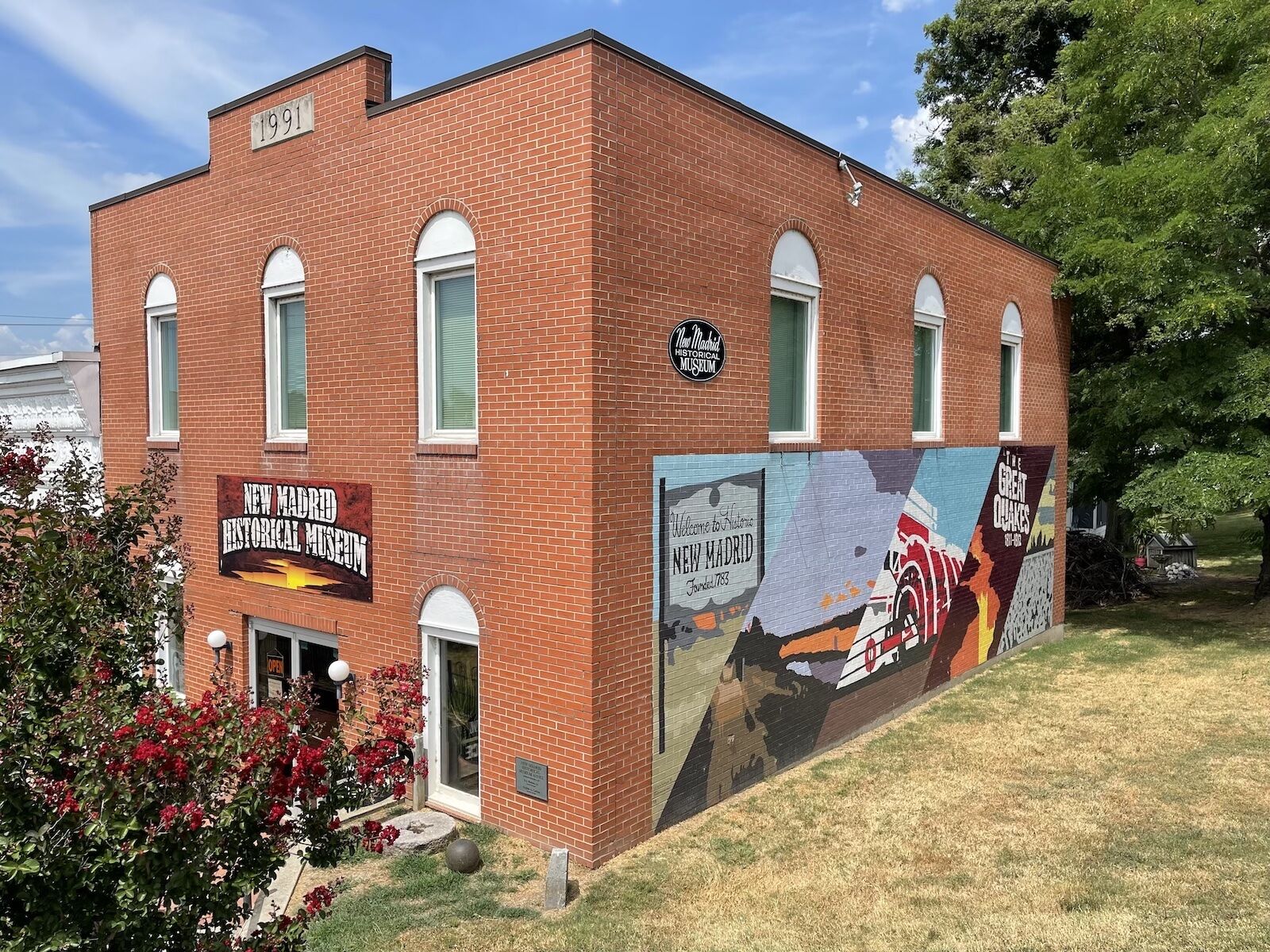 During our trip, we stopped at Ashport Landing, Tennessee, home to Fort Pillow State Historic Park where Confederate and Union soldiers fought during the Civil War; In New Madrid, Missouri, a tiny town whose claim to fame is having suffered the biggest earthquakes in American history in the early 19th century; the fun and artsy town of Paducah, Kentucky; and the small town of Dover, Tennessee, located in Stewart County, the most armed county in the United States and home to fewer than 15,000 people (but there are 57 churches).

Not all excursions are exciting. The towns of New Madrid and Dover are small and don’t have an awful lot to offer to passing tourists, yet visiting them allows passengers to peek into how people live, which is exactly what travel is all about. 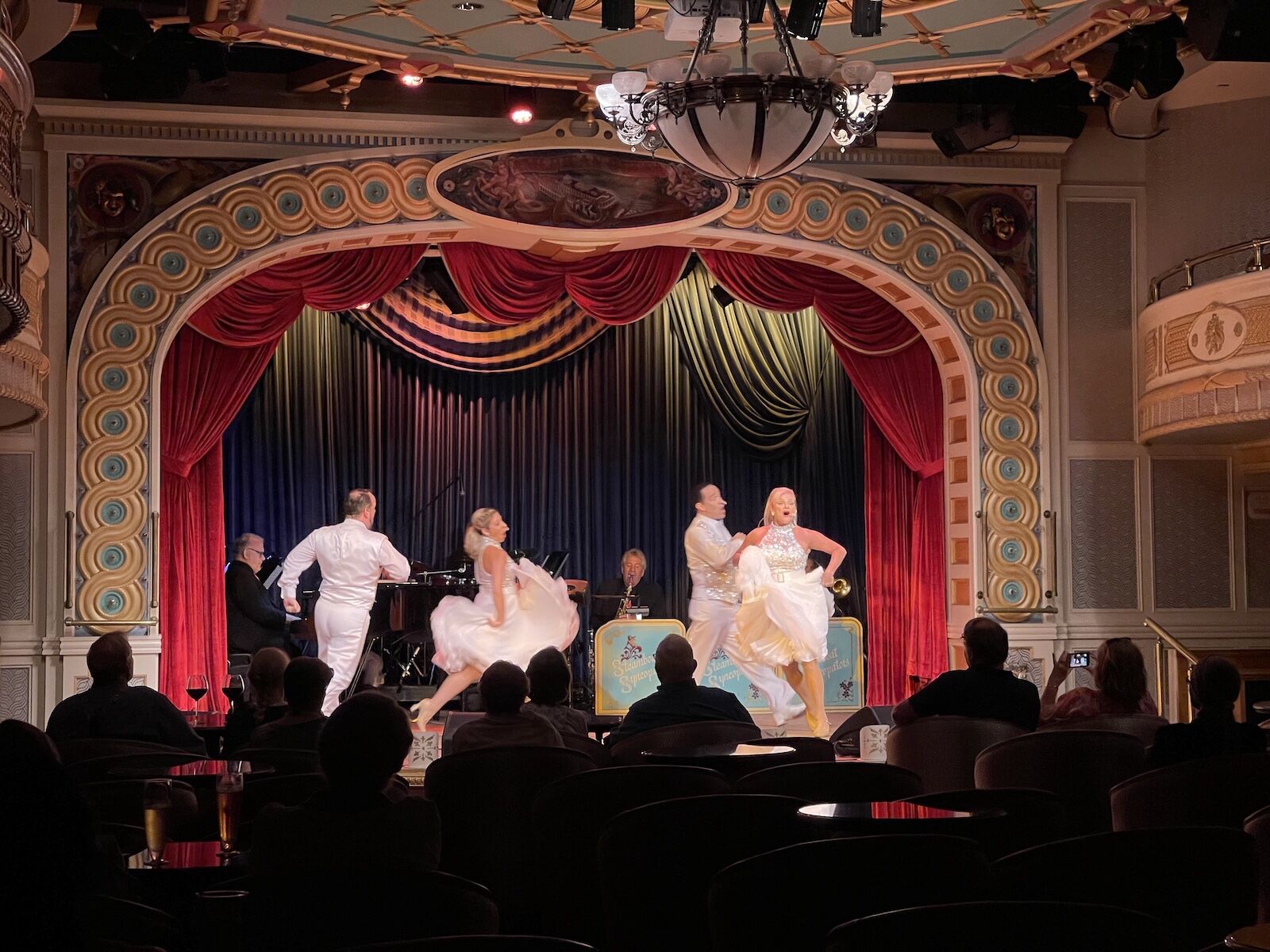 Entertainment in the Grand Saloon on the American Queen. Photo: Jesse Adams

In between excursions and tanning sessions by the pool, there’s plenty of entertainment to be had aboard the American Queen. For music, there are jazz and blues concerts in the Engine Room Bar (from where you can see the paddlewheel doing its job), piano and sing-along sessions at the Captain’s Bar, and Broadway music in the highly decorated Grand Saloon. There are also bingo games and trivia during which you can win a big wad of dollar bills or items from the gift shop.

What to eat aboard the American Queen

There’s plenty of barbecue, as to be expected on the cruise in the American South, but it’s certainly not the only appetizing offer. You can get amazing ribs and roast beef and all sorts of classic sides like mashed potatoes, grits, Coca-Cola green beans, etc. from the Front Porch Café on the third deck. Vegans and vegetarians don’t need to worry about getting their fair share of scrumptious foods: Every meal offers a vegan option, whether that be breakfast power bowls and quinoa porridge in the morning, or cauliflower steak and a creamy rich vegetable curry for dinner. Every espresso machine on board is also equipped with non-dairy milk alternatives. 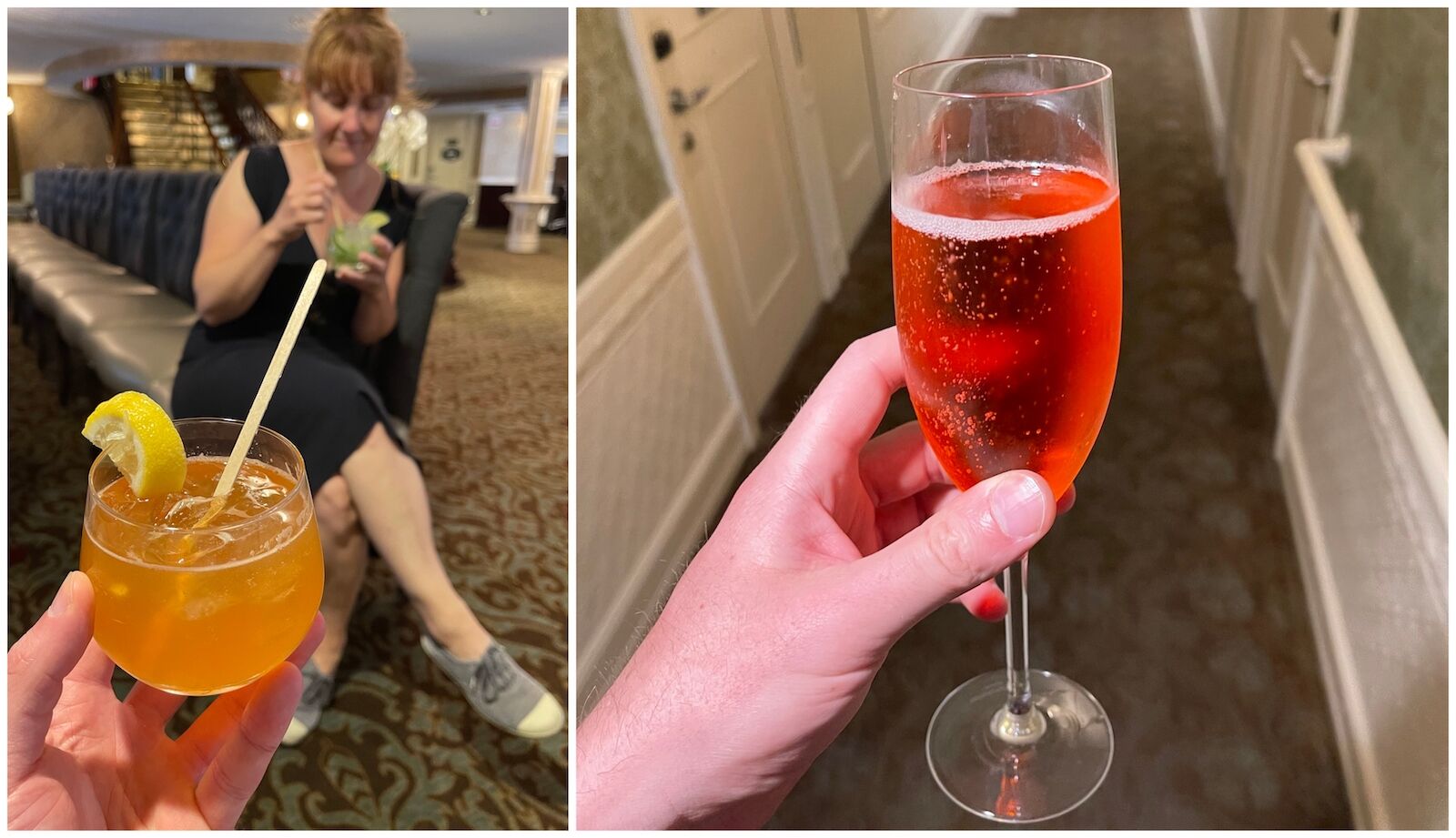 And it’s the same when it comes to beverages. There’s nothing outdated about what’s on the menu. Cocktails of the day — think Americanos, Moscow mules, and bourbon punches — are announced the evening before on the daily schedule deposited on your bed at turn-down service, so you can go to sleep assured you won’t go thirsty the next day. But if you don’t feel like having the daily highlighted beverage, you can ask for whatever drinks you want and the bartender will take care of it. My partner enjoyed all the daily cocktails (and some), and I asked for virgin versions, all of which were very well executed. And remember, when you’re onboard, all the drinks are included.

The excursions, the entertainment, and the food and drinks should keep you very busy during your time aboard the American Queen. That said, there are some activities that are less flashy but that passengers would be remiss to pass on.

Try your hands at the Calliope 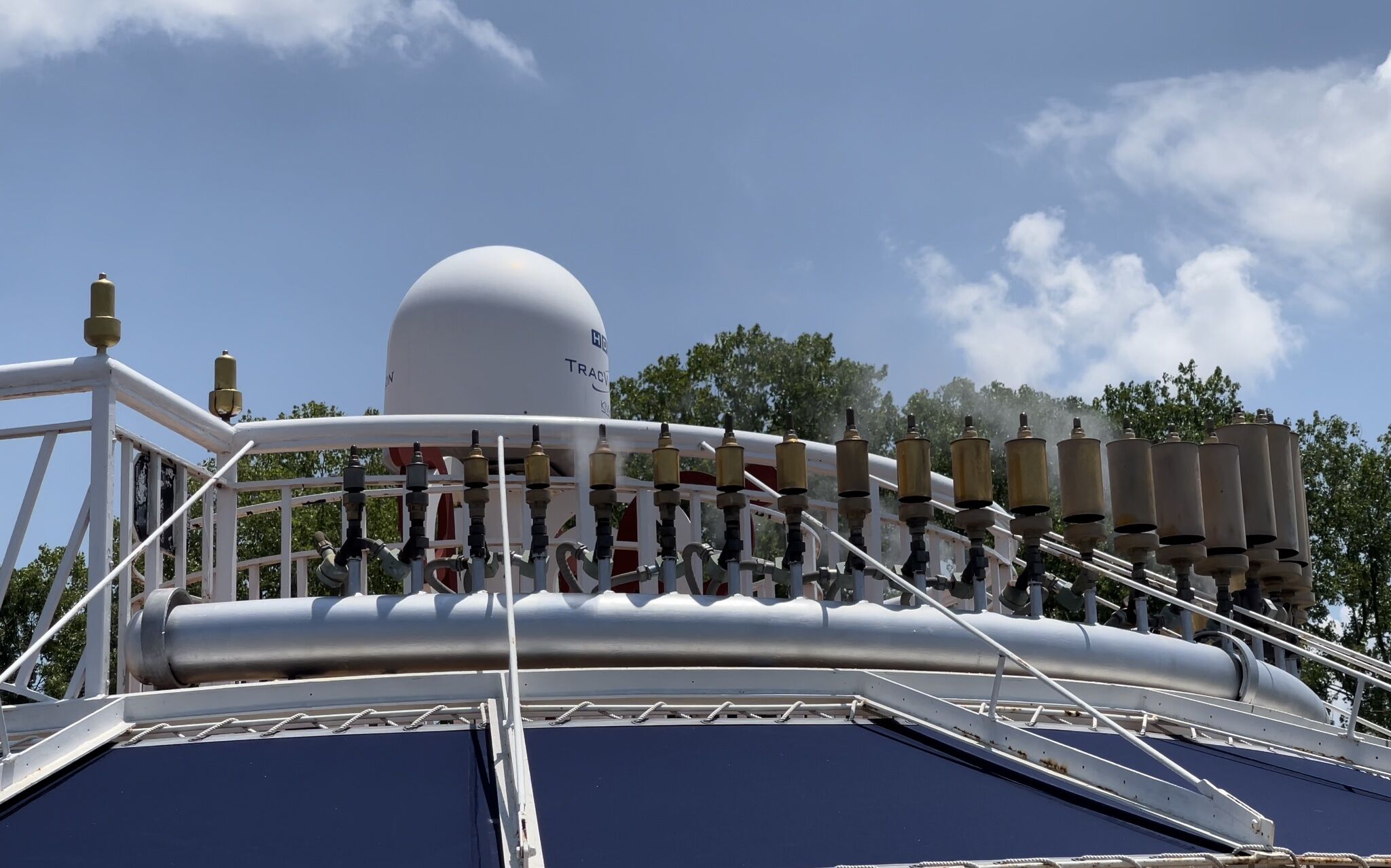 Every time the American Queen leaves a port, one of the on-board pianists makes his way to the River Grill bar on the fifth deck and plays the Calliope, a steam-whistle organ. It’s a very loud and unusual instrument, which you can try if you wish. Just ask the musician in charge that day and they’ll give you a couple of tips so you don’t burst anyone’s eardrums. If you’d rather just look, make sure to take a peek at the whistle pipes releasing the steam on the sixth deck.

When a lock is coming, get on the deck 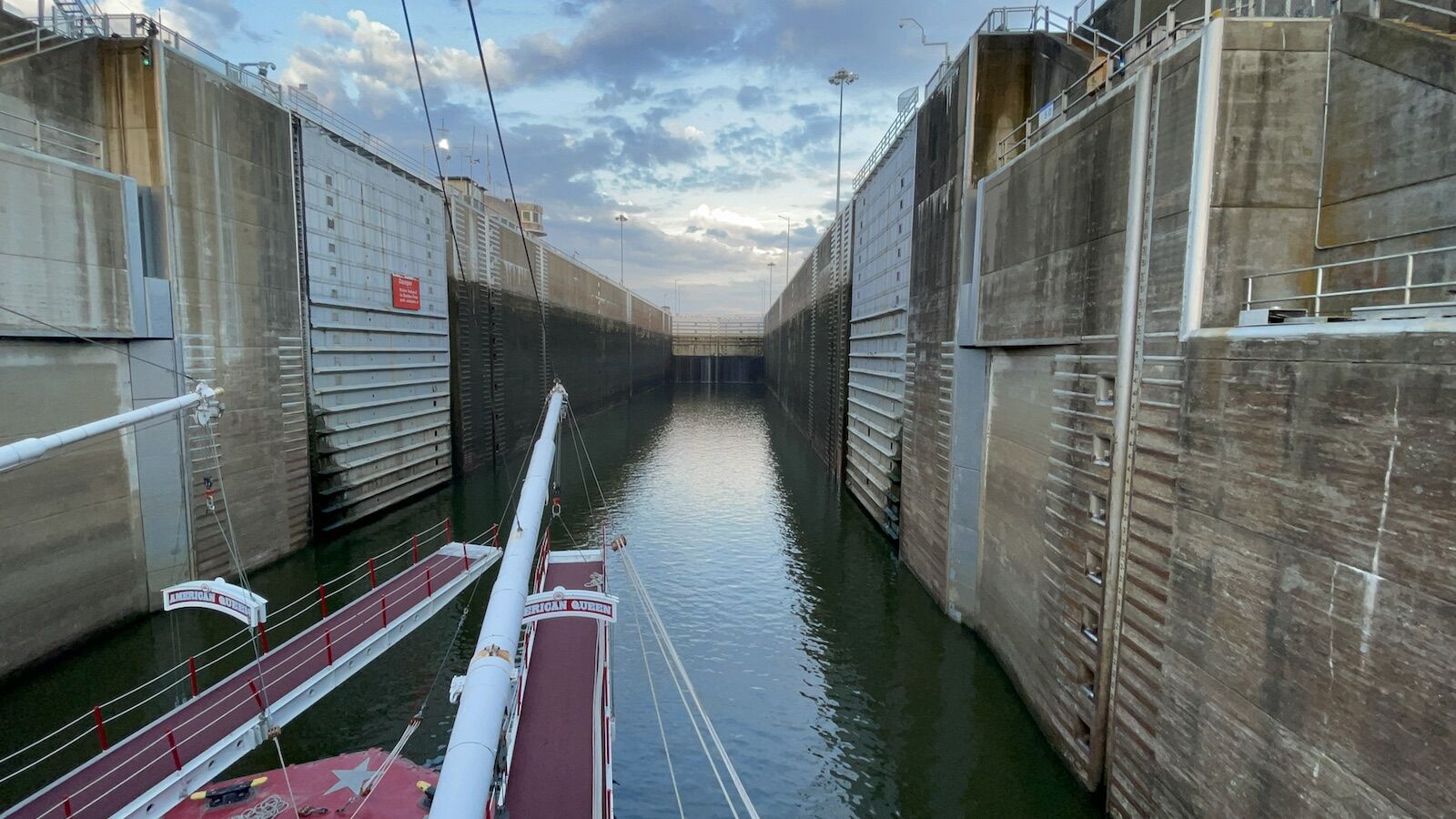 Going through the Kentucky Lock aboard the American Queen. Photo: Jesse Adams

A 418-foot-long vessel going through a lock is an impressive sight. It requires a lot of skills from the pilots and the crew for the American Queen to fit in the lock and be securely tied without any accidents. But not all locks are created equal — some are fun to witness, others are mind-blowing. Take Olmsted Lock on the Lower Ohio River, between New Madrid and Paducah. It has a chamber that’s 37 feet high and the water level increases by around 30 feet inside. It’s cool to see, but you won’t lose sleep over it. Going through the Kentucky Lock, however, is eerie and claustrophobic. At the confluence between the Tennessee River and the Cumberland River, the chamber is 94-feet-high and the boat is raised by about 90 feet in less than 30 minutes. It’s freakish and you should not miss it.

When a bridge is on the horizon, make your way to the prow 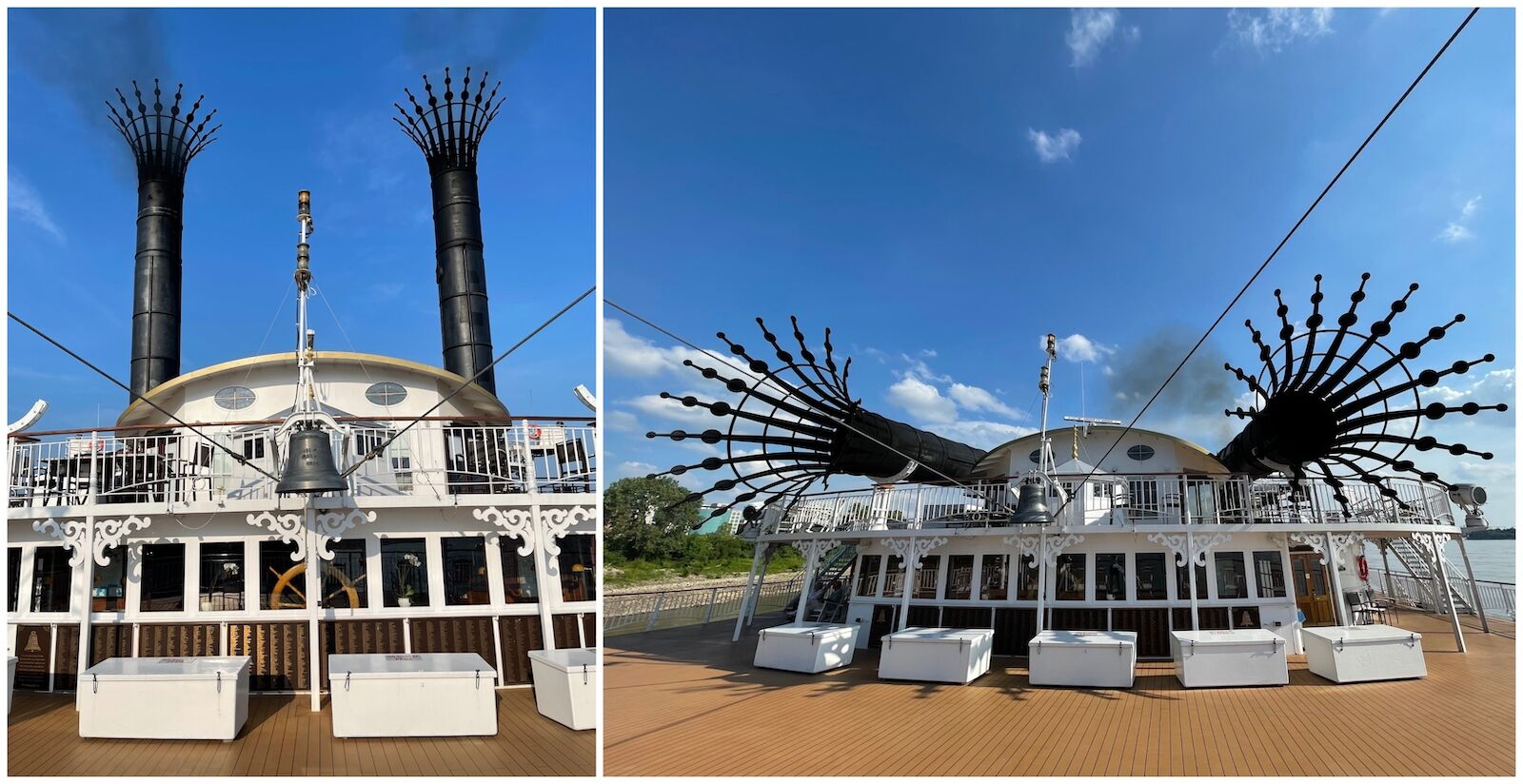 The American Queen is fitted with two 109-foot-tall smokestacks topped with a crown-like design. Those stacks, as charming and old-school as they look, are made with contemporary navigating in mind. When the vessel needs to pass below a bridge, the stacks are lowered, going from vertical to fully horizontal in the blink of an eye. Keep an eye on the horizon so you’ll know when to head to the prow and see the towering stacks being lowered.

While taking a tour of the pilot room is advertised daily, going down to see the engine room is lesser-known, yet just as insightful. Unlike the tours of the pilot room, you don’t need to pre-book your visit to the engine room — just go down the steps and have a little chat with the engineers running the ship. It’s fun to see how a paddlewheel steamboat works, especially one that still uses old-fashioned levers to control the speed.