If you had to choose one image to depict the essence of travel in the US, it might just be wide, open roads through wide, open landscapes. At nearly four million square miles, the country relies on its highways — in all their various iterations, some aging, two-lane relics of eras past, others traffic-jammed, billboarded behemoths — to draw its myriad regions together.

Within that intricate web of pavement lie roads gone wild, virtually abandoned, connecting little but the middle of nowhere to its edges. These are the roads where the magic of the American road trip is undeniable. Make sure you’ve got a full tank, plenty of creature comforts, and a good playlist — here’s where to hit the road. 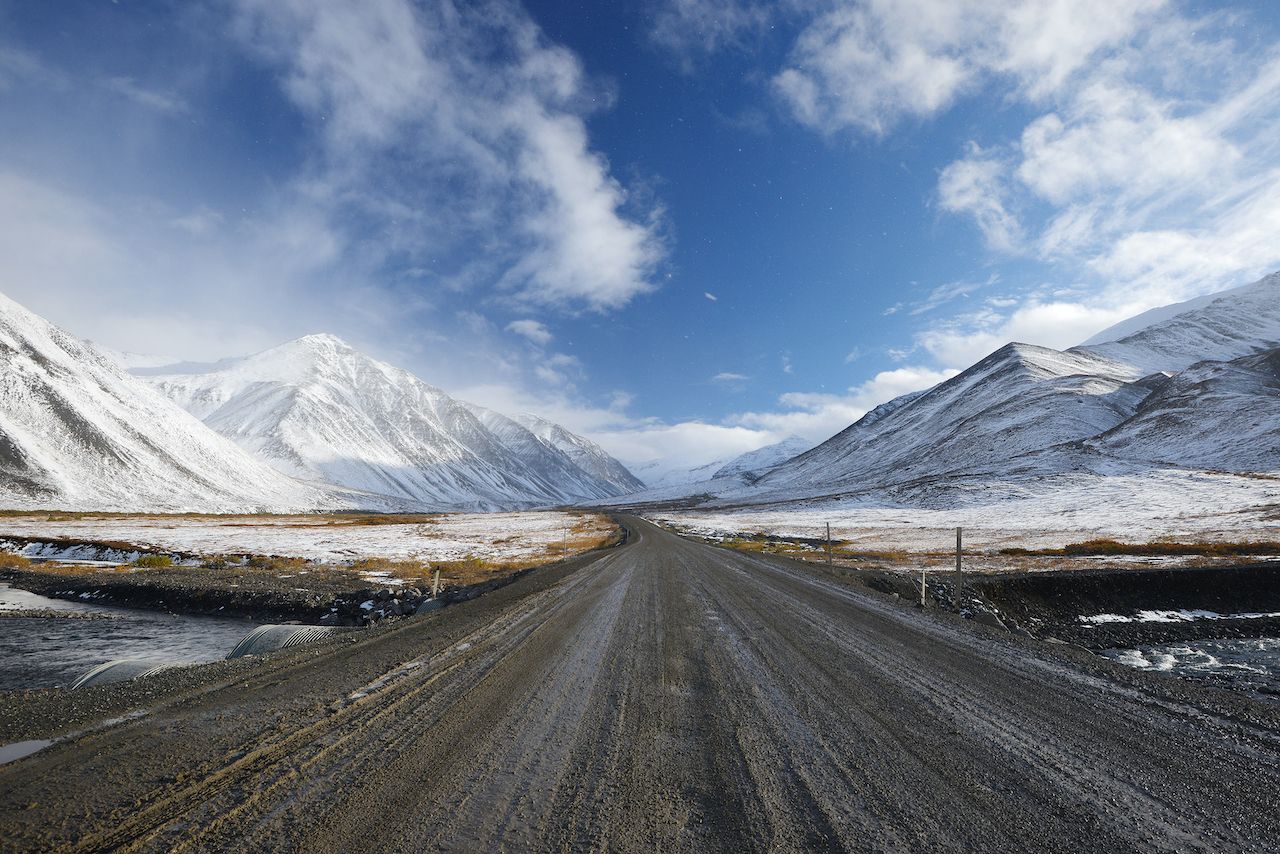 If we’re being honest, all of the country’s quietest roads are in Alaska — only 5% of the state is even paved, and it’s four times the size of California. But the path de résistance here is the Dalton Highway, a 414-mile thoroughfare from Fairbanks to Deadhorse that winds through boreal forest on gravel and dirt. A route for ice truckers and almost no one else, it skirts the eastern border of Gates of the Arctic National Park and works north past the Yukon River all the way to the Arctic Ocean.

For a true getaway from the stereotypical road trip scene — and its herds of RVs and tourists — Alaska is the place to do it. Just stock up on all your travel essentials so you can go for longer stints without resupplying, as rest stops are a less common sight here than the Northern Lights. On all of the Dalton Highway, there are three very small towns, including the world’s northernmost truck stop in Coldfoot. 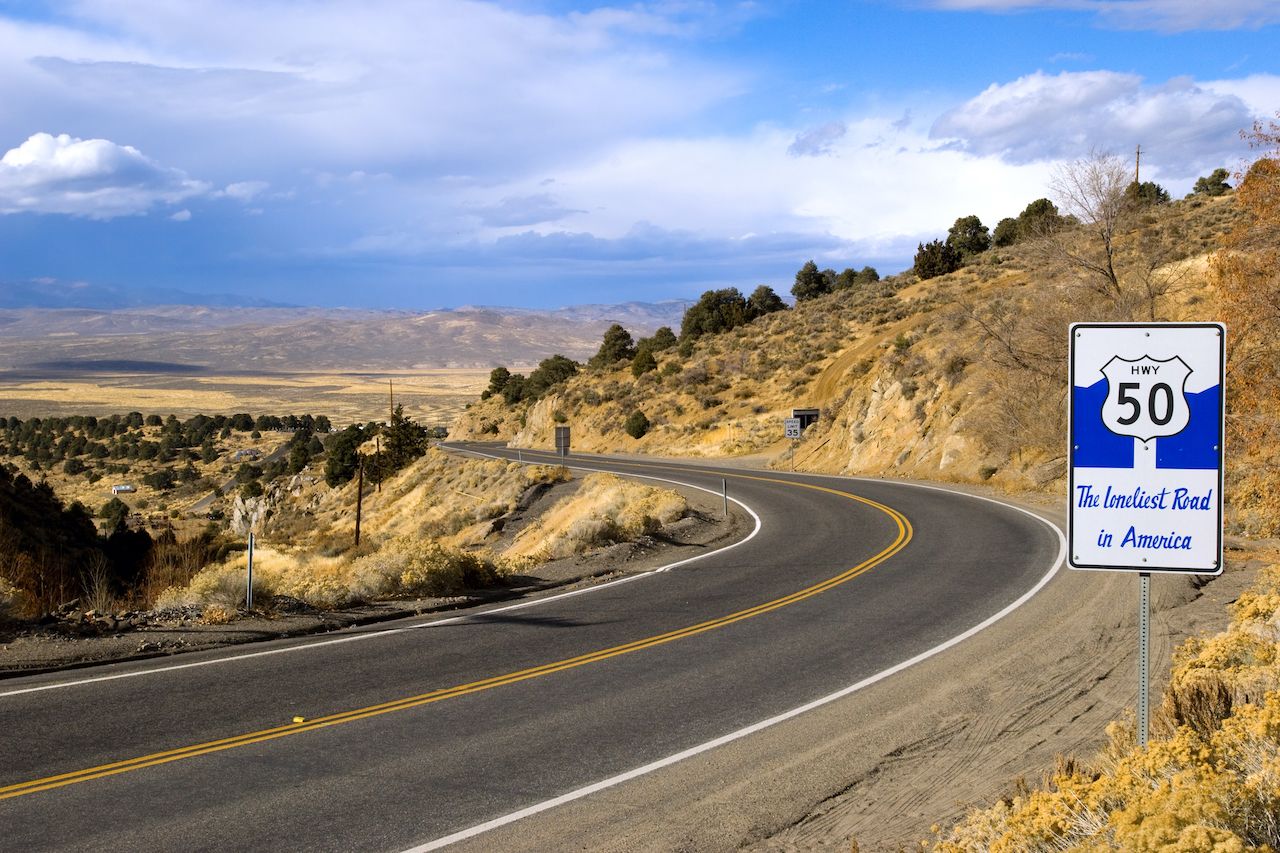 Nicknamed the “Loneliest Road in America,” US Route 50 crosses the entire country from West Sacramento, California, to Ocean City, Maryland. But along the stretch through central Nevada — and Utah, if you want an add-on — its connection to the modern world flickers. Instead, it traverses forsaken mining outposts, alpine peaks, desert valleys, and the northern edge of Great Basin National Park. Here, the line between actual towns and ghost towns feels like the hands on a clock.

Start in Reno, aka the Biggest Little City, and head east — the opposite direction of gold rushers back in the 1850s. The “loneliness” sets in once you hit Fernley, ending 287 miles later in Ely. What’s in between? It’s best to go without expectations. 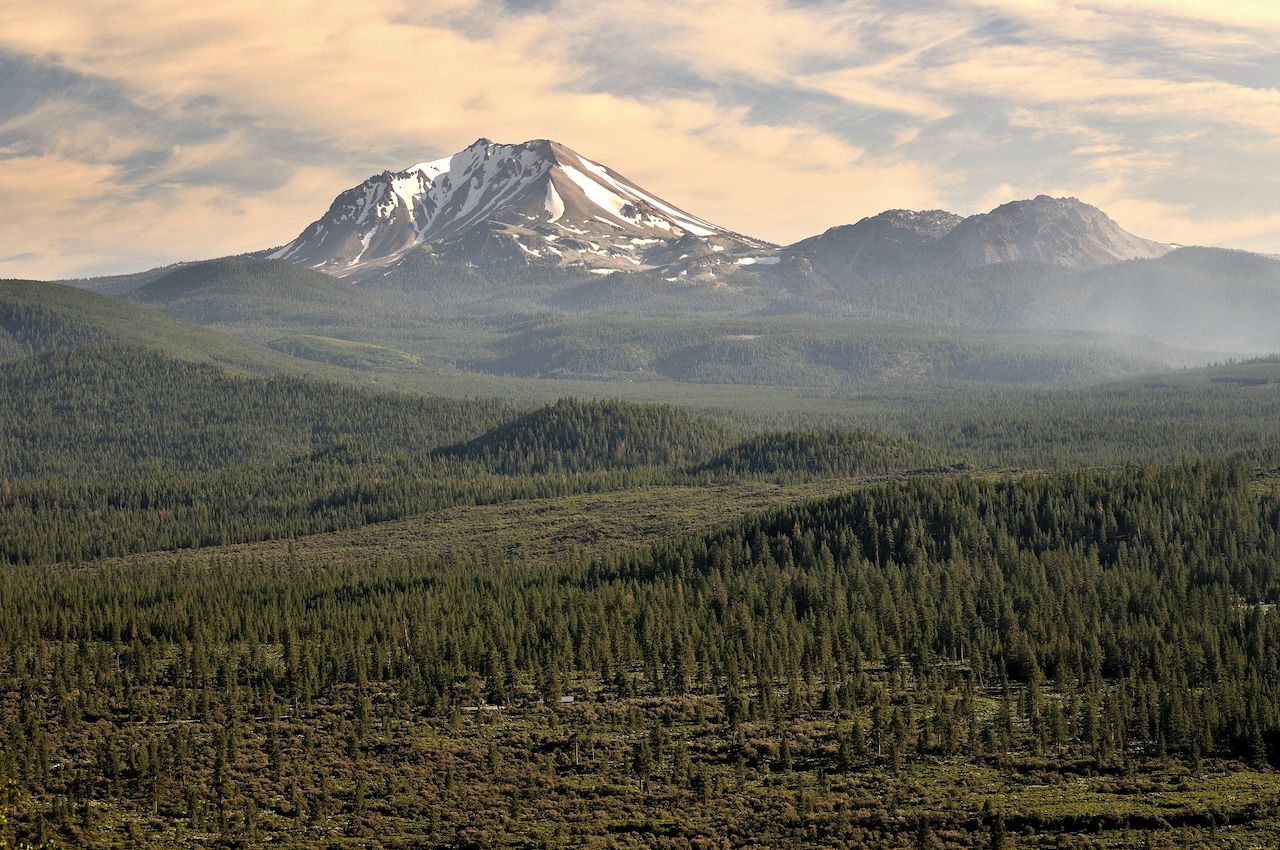 It’s hard to find a quiet, untrodden spot in California, but you’d be surprised how quickly the crowds fade off the 101. Head up to Route 139 in Susanville, not too far from the state’s northeastern corner, and you have almost 140 miles of strikingly empty and starkly beautiful road stretched out in front of you — all the way to the Oregon border.

This ribbon of pavement runs just east of Lassen Volcanic National Park (Mt. Lassen remains active to this day) and takes you to Lava Beds National Monument, through Modoc National Forest, past too many lakes to mention, and — if you’d like to keep going — all the way to Klamath Falls, Oregon, just south of Crater Lake National Park.

4. US Route 45, Wisconsin and Michigan 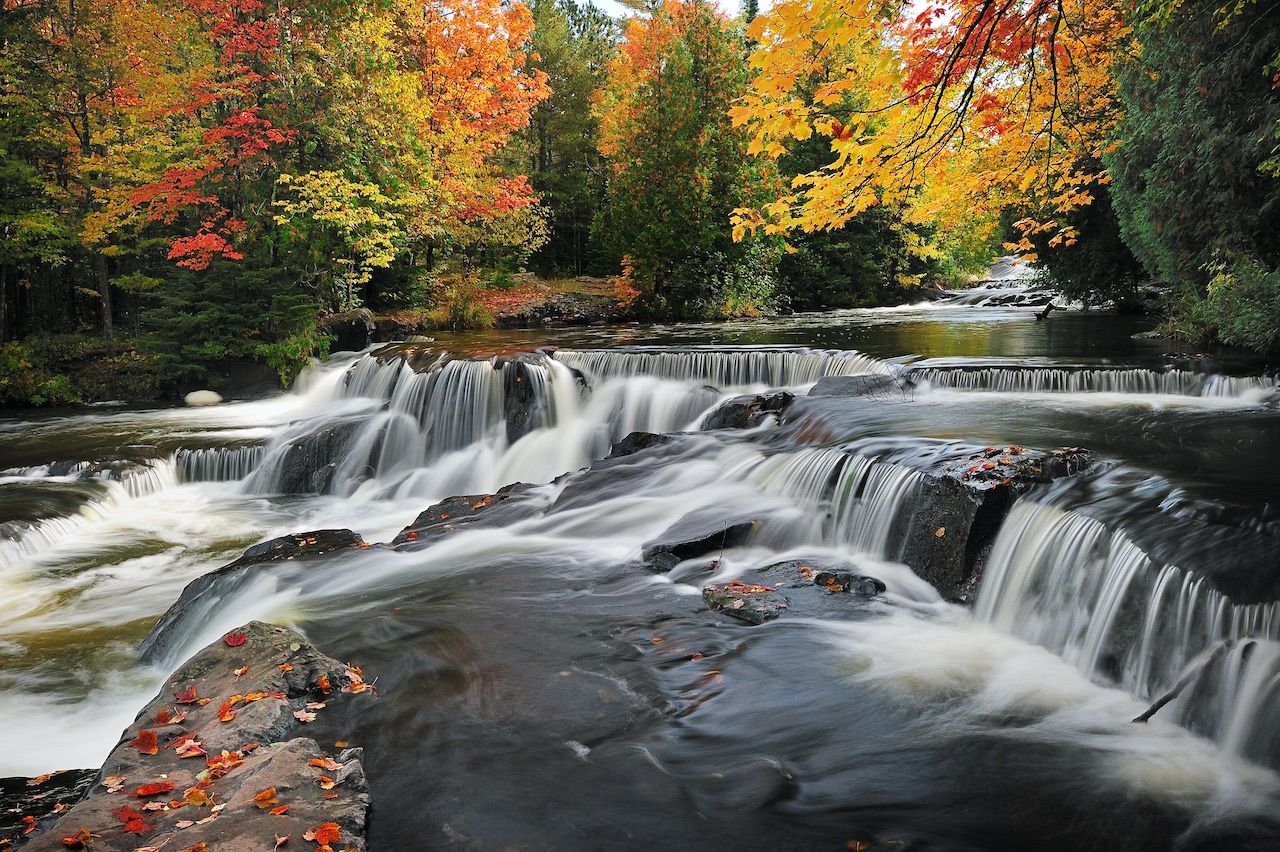 Unlike most of the Midwest, northern Wisconsin into Michigan’s Upper Peninsula is little but Northwoods, a world of lakes, rivers, and forests that stay quiet year-round. From Pelican Lake, US Route 45 beelines straight north for Lake Superior, the map deep shades of green polka-dotted in blue (Wisconsin actually has more lakes than 10,000-famous Minnesota).

The 106-mile drive takes you to Eagle River — a great break for kayaking and tubing — across state lines at Land O’Lakes, through Ottawa National Forest, near Bond Falls and O Kun-de-kun Falls, and finally to Ontanagon, right on the shore of Lake Superior. Just to the west lies Porcupine Mountains Wilderness State Park, 60,000 acres of virgin forest you need to visit. When’s the next time you’ll be all the way up here? 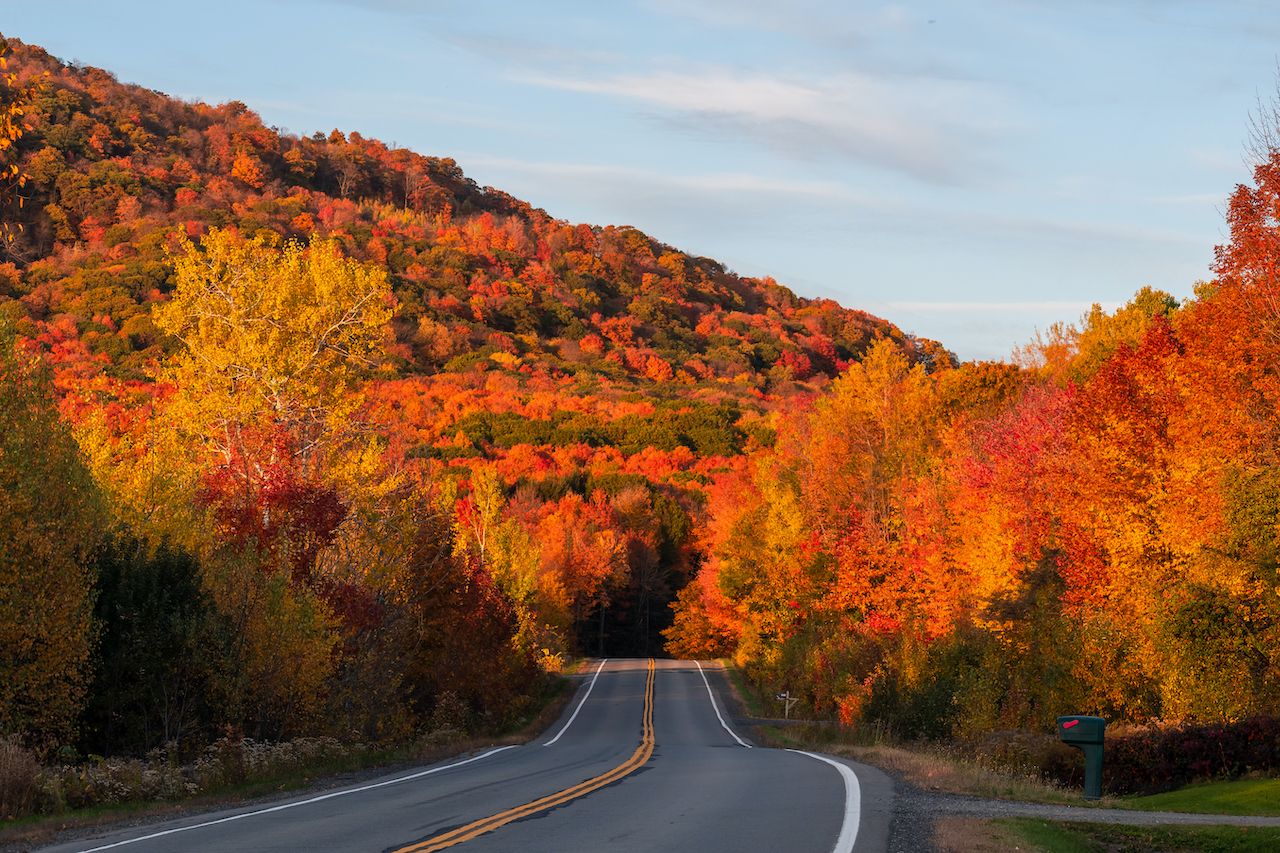 If you’re looking for an autumn leaf-peeping drive unfit for Greyhound buses and bucket-listing tourists, check out Maine’s US Route 201. The 78-mile “Old Canada Road” follows the Kennebec River through miles of forested hills painted in oranges, reds, and golds, along S-curves leading to mountain views, and into a few towns frozen in time, all the way to Quebec.

For a break from the gas pedal, go whitewater rafting at The Forks — it’s where the Kennebec and Dead Rivers meet — hike on the Kennebec Valley Trail or the Appalachian Trail, or stop for a picnic on Wyman Lake. Just remember to take it slow — that bit about the journey being the destination is certainly a cliché, but one that was born of truth on roads like these.

This post is proudly produced in partnership with YETI.
Tagged
Road Trips United States YETI: Hauling home for the holidays
What did you think of this story?
Meh
Good
Awesome
✖
travelstoke
Download the mobile app
stoked by