Like the region itself, Andalusian cuisine is a melting pot of different cultures and civilizations with diverse influences but a prominent traditional Spanish spirit. Famous for fresh seafood, exceptional meat, exotic spices, seasonal ingredients, and virgin olive oil (or liquid gold as locals call it), the wondrous Andalusian gastronomy is an experience not to be missed when visiting southern Spain. 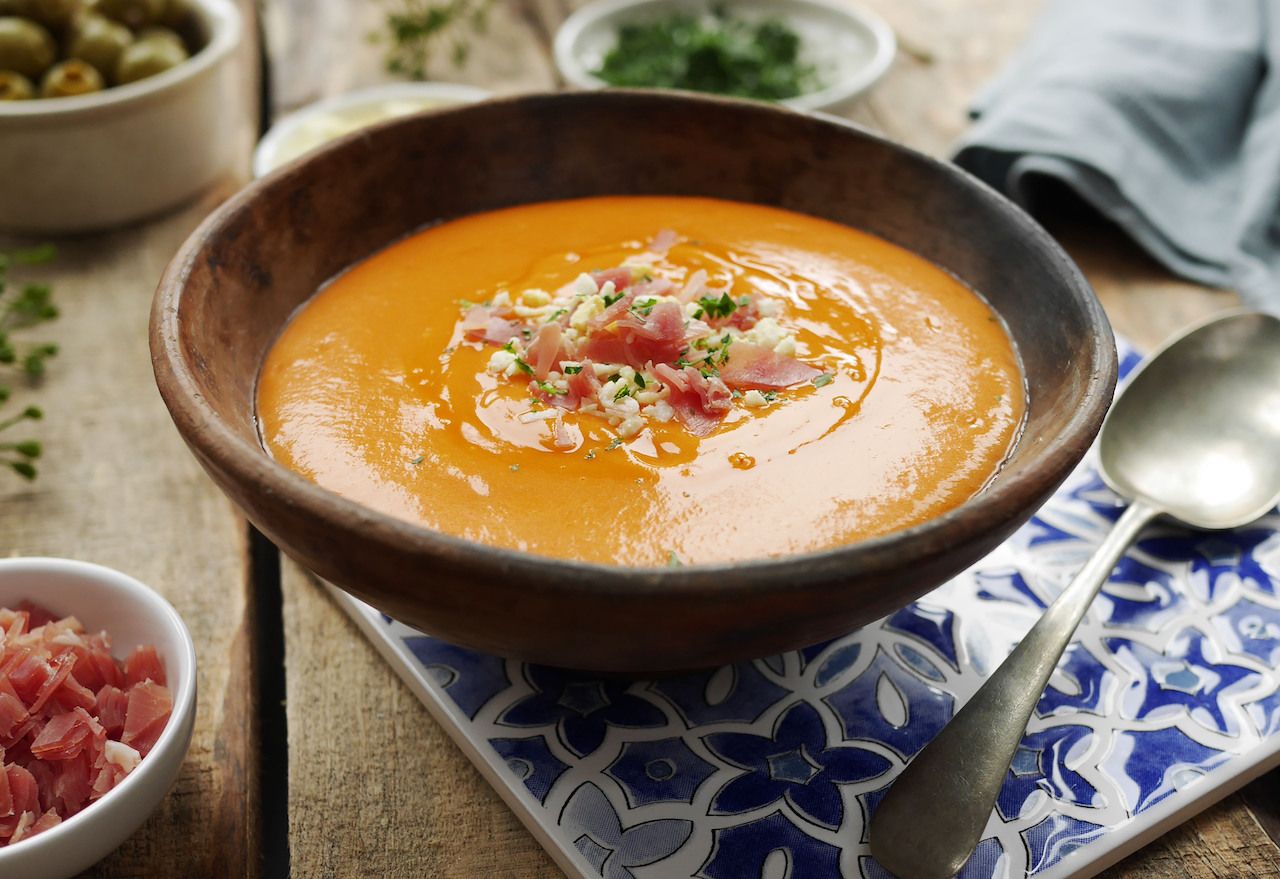 Originating from the southern city of Cordoba, salmorejo is one of Andalusia’s most popular dishes. It’s a cold, velvety tomato soup made with breadcrumbs and olive oil that’s often served with diced jamón Ibérico (Iberian ham) and sliced boiled eggs. Salmorejo is not to be confused with the similar gazpacho. In Spain, salmorejo is typically served in a bowl while gazpacho is meant to be drunk from a glass. It’s a typical starter for every meal, and is a commonly enjoyed in the hot summer months. 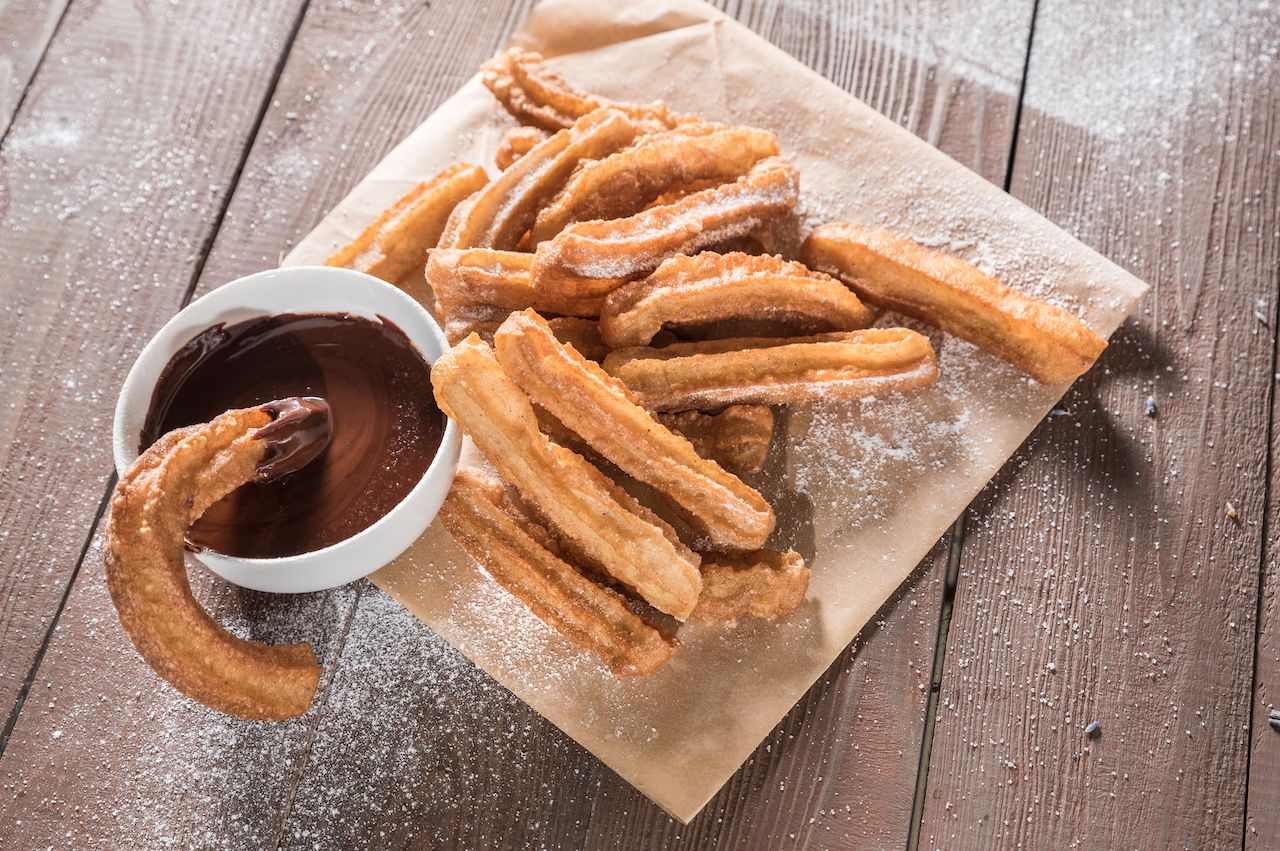 Andalusia’s most famous comfort food is hidden in plain sight. Just walk around any Andalusian town and keep an eye out for the tiny shops and food stalls called churrerías. You’ll see locals enjoying a cup of coffee along with some churros con chocolate for breakfast. Churros are long sticks of thick, deep-fried dough that are served with a bowl of hot liquid chocolate as a dip. A box of fresh churros is the perfect way to start off the day or boost your energy levels after a long night out. 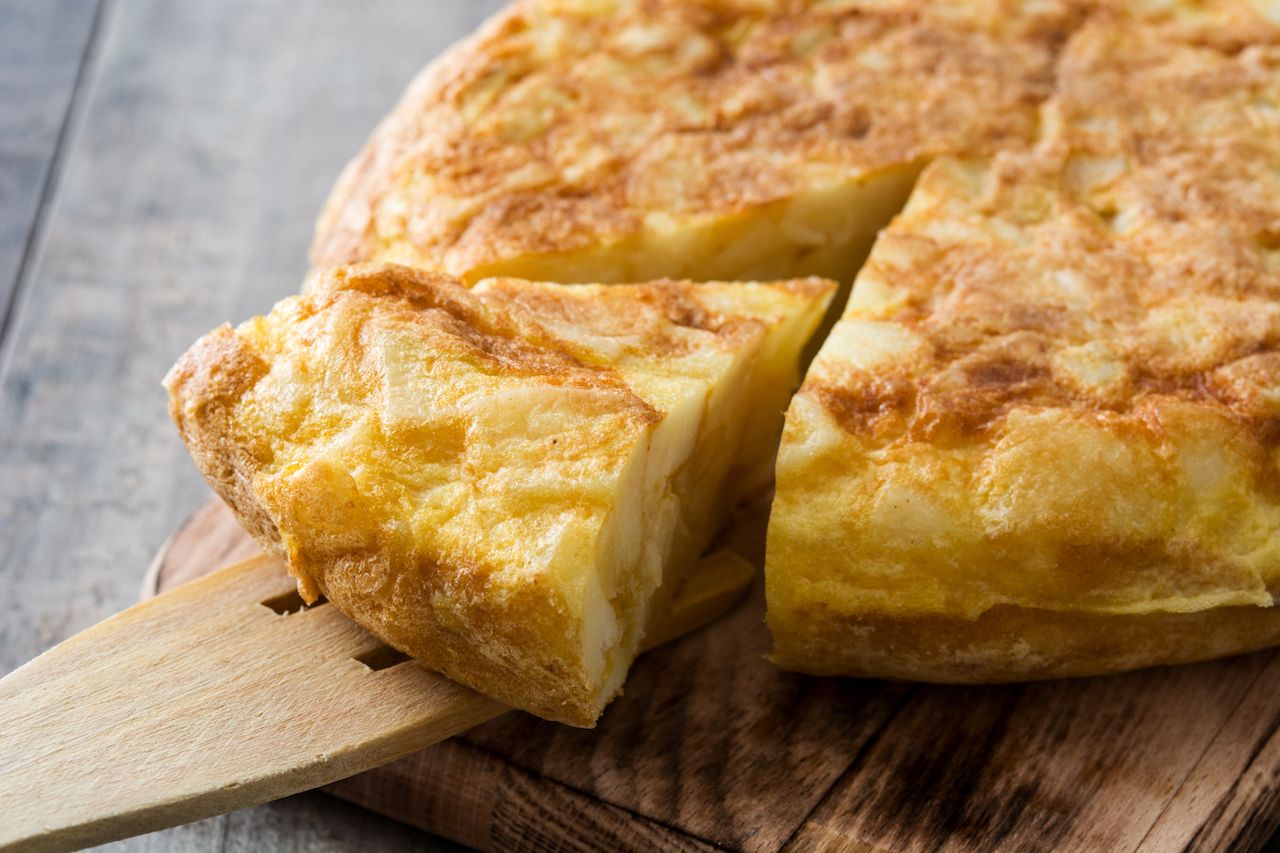 Tortilla de patatas, also called tortilla Española, is nothing like the Mexican tortilla. It’s basically a quiche with soft potatoes as the base that’s enriched with ingredients like goat cheese, vegetables, chorizo, or ham. It’s served in triangular pieces like a pie. A piece of tortilla de patatas is the ideal choice if you’re looking for a light lunch on the go while roaming Andalusia. 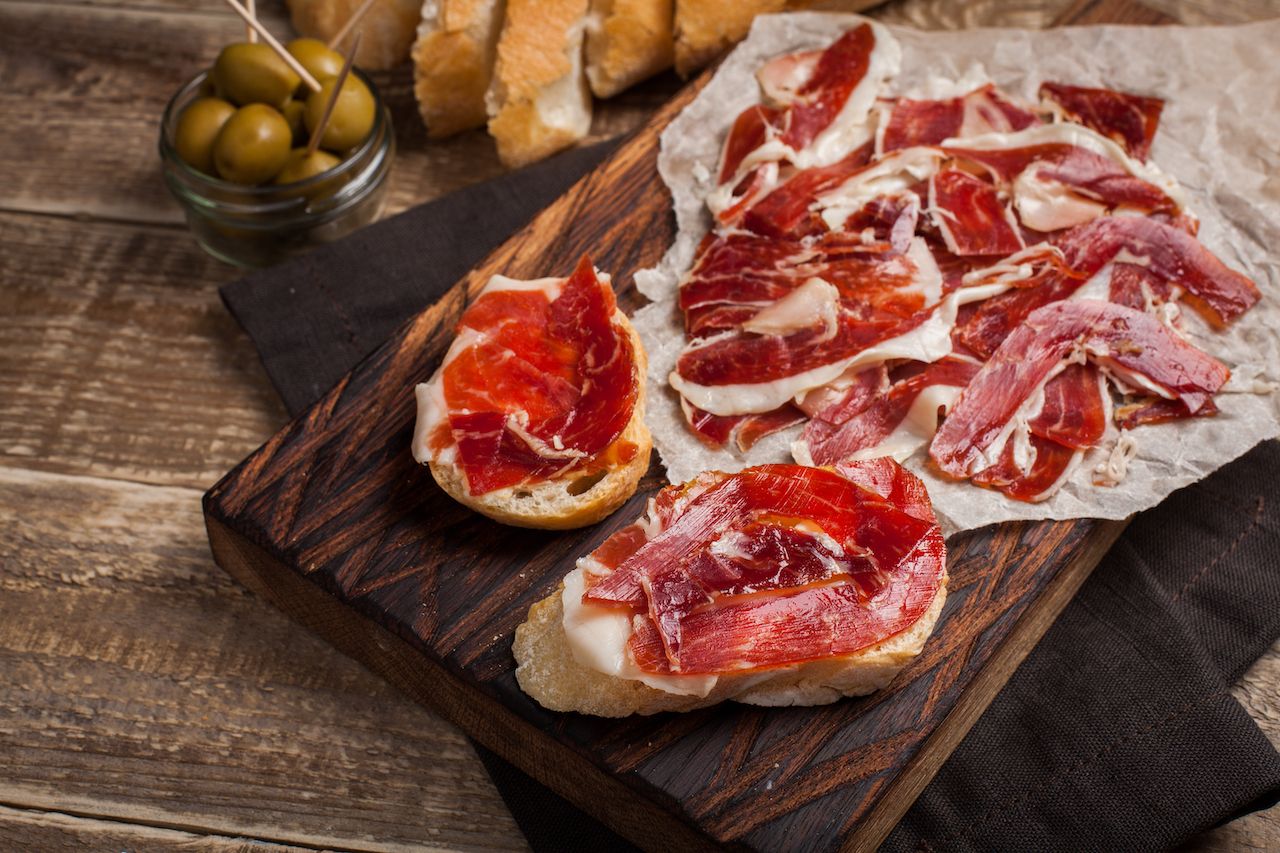 Iberian pigs are found only in Spain and live a free-range lifestyle. It’s an exclusive delicacy, and this exquisite treat is usually reserved for the most special occasions in Andalusia. Jamón Ibérico platter consists of thin slices of cured ham served with sprinkles of virgin olive oil and breadsticks on the side. Different labels and names indicate the quality of the meat, depending on the animals’ origin and their diet. The highest quality jamón Ibérico is pata negra (black hoof), made from black Iberian pigs that feed solely on wild acorns for the last few months leading up to their “sacrifice,” as locals call it. 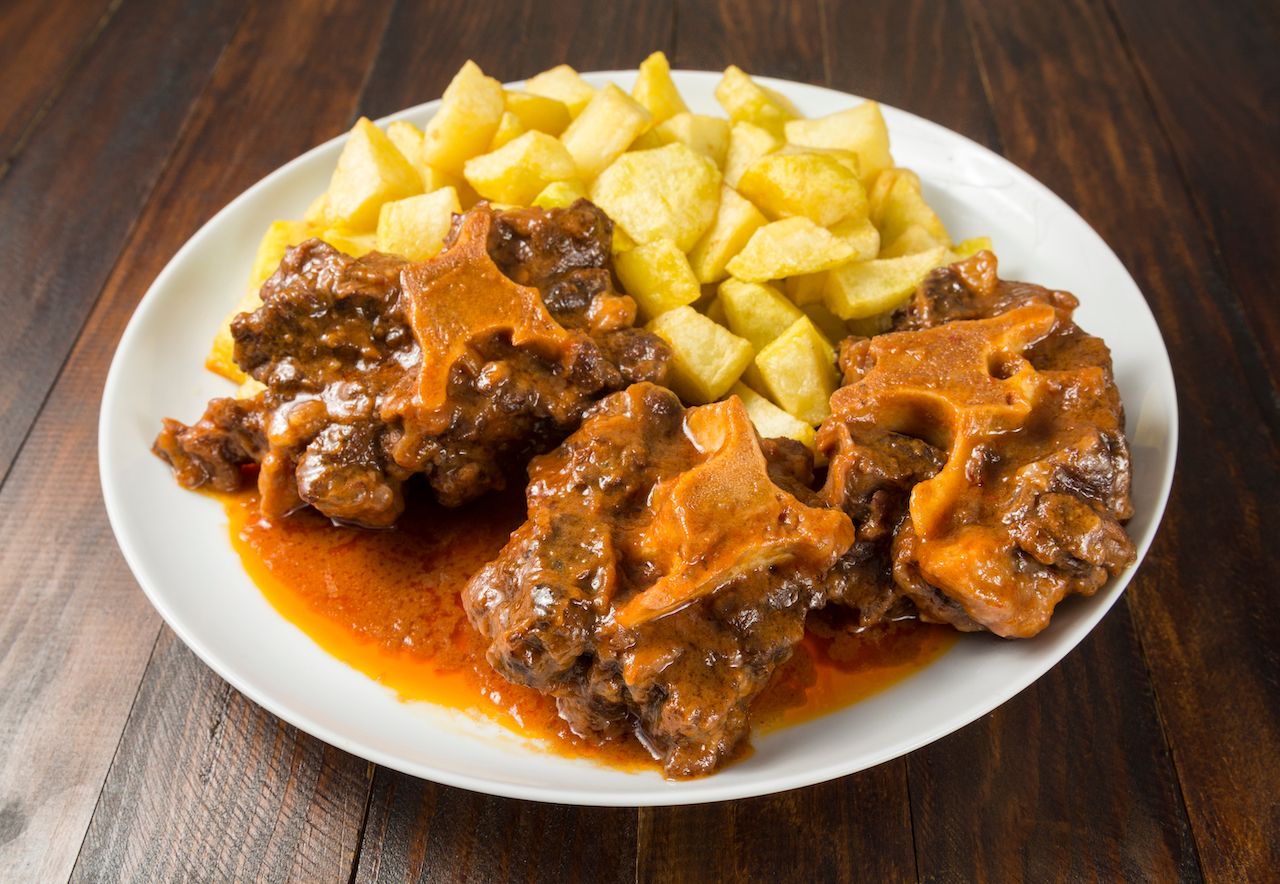 Found primarily in the tapas bars and restaurants of Seville, cola de toro is one of the most extraordinary traditional Andalusian dishes. The recipe is quite simple: chunks of bull tail is slow cooked for several hours in a stew of red wine, vegetables, olive oil, and spices. The meat is served in a delicious thick sauce with a side of potato wedges, and the whole thing is so tender that it melts on the fork. 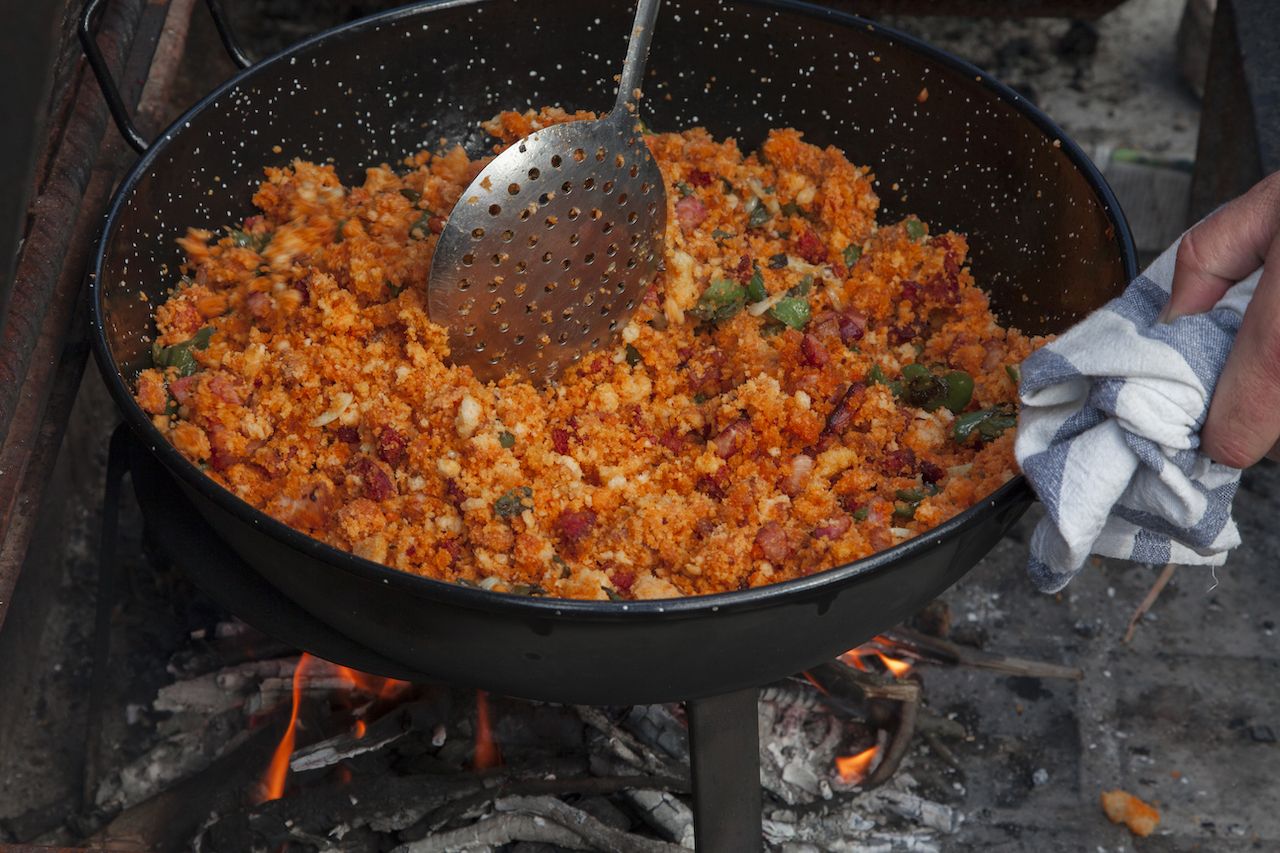 Don’t let the simplicity of this colorful tapa fool you. Translating to “crumbs,” migas shows the North African influence on Andalusian cuisine. Migas is made with a base of flour or breadcrumbs that’s fried and scrambled with vegetables and meat. There are many different variations of the dish to be found across the region, including migas with jamón, chorizo, sausage, peppers, onion, and seafood. If you’re a vegetarian traveling to Andalusia, keep in mind that hams are not exactly considered to be meat here, so be very explicit about your order. 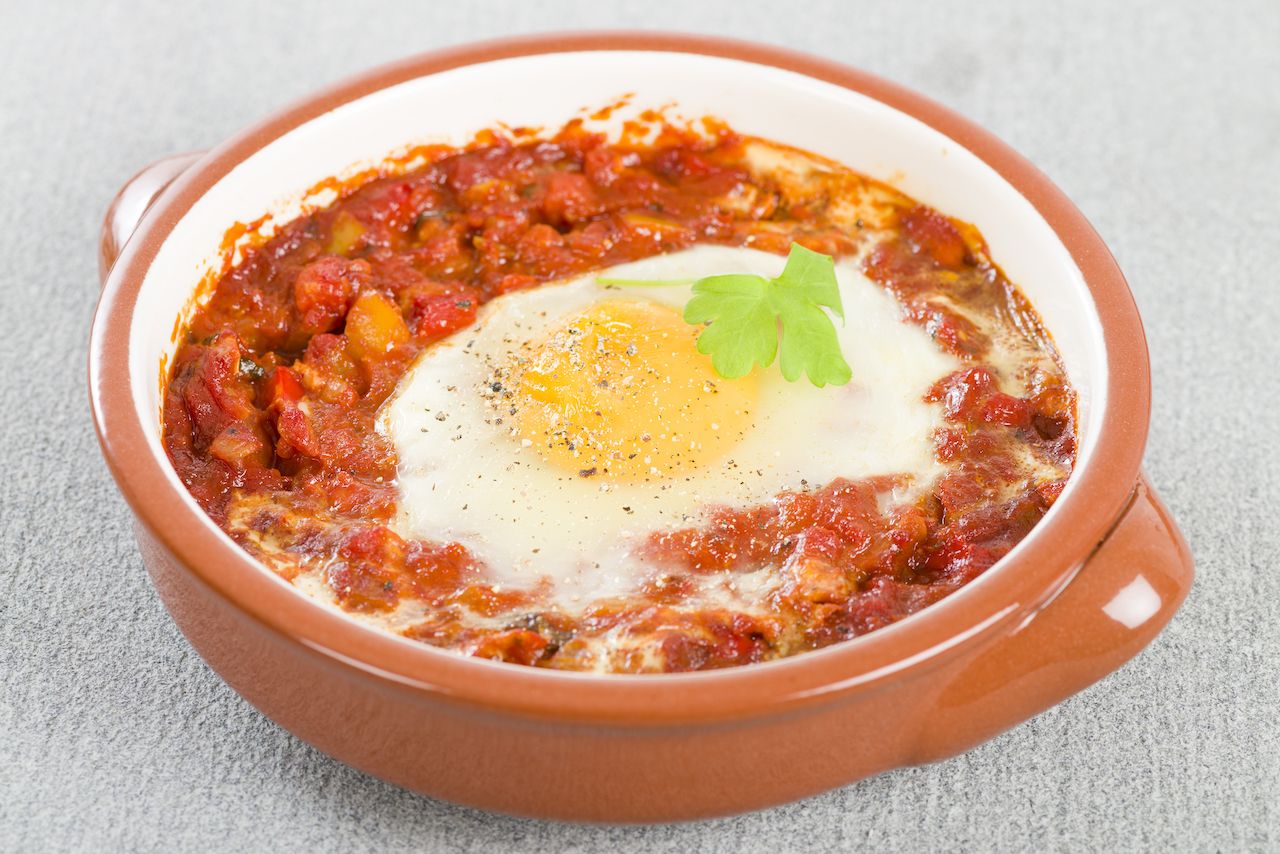 This is essentially Andalusia on a plate. Huevos a la flamenca is an egg cassoulet made with tomato sauce, spicy red peppers, onions, garlic, and smoked paprika topped with diced jamón serrano and chorizo sausage. The dish is typically served hot out of the oven in a clay pot and makes for an exceptional brunch or light-lunch meal. 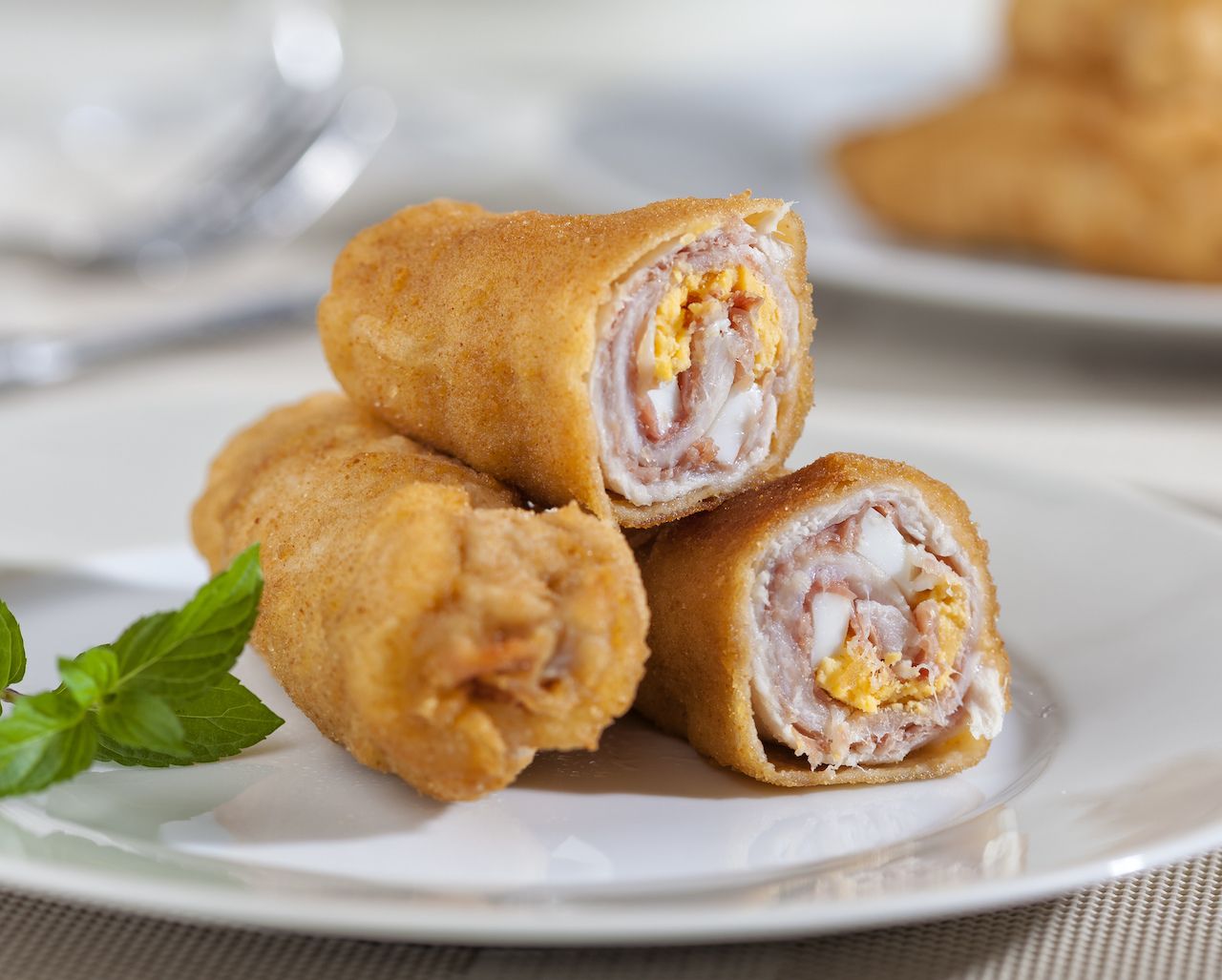 Even though flamenquines look like the croquetas found in almost every tapas bar in Andalusia, the recipe and taste are altogether different. Flamenquines are roulades made with pork loin, jamón, and sometimes goat cheese and vegetables. The slices of ham and the chunks of cheese are rolled in thinly sliced fillets of pork before being covered in breadcrumbs and deep-fried until golden brown. Served with french fries and mayonnaise or garlic sauce, this dish is the perfect accompaniment to a cold afternoon beer. 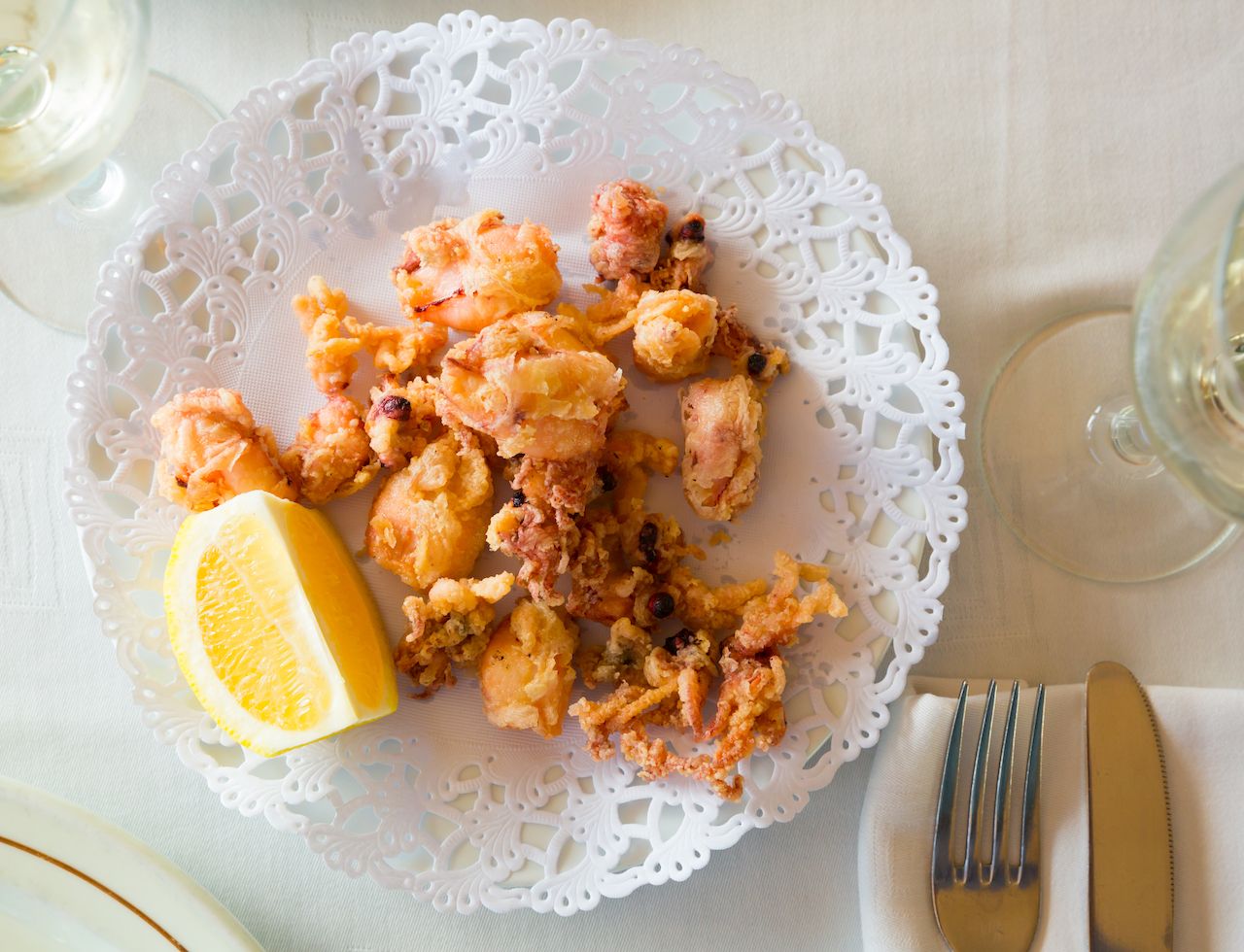 No list of traditional Andalusian dishes is complete without at least one mention of the region’s splendid seafood. In every Andalusian town you’ll find freidurías, which are tiny shops that fry fresh fish and critters on the spot. This is the original Spanish fast food. The portions are served in little boxes or paper rolls with french fries or breadsticks as on-the-go snacks. Make sure to try the gambas fritas (fried shrimp), calamares (squid), chocos (cuttlefish), and puntillitas (baby squid).

Languages15 Andalucían Expressions To Know Before You Go To Spain
Tagged
Food + Drink Andalusia, Spain
What did you think of this story?
Meh
Good
Awesome

Discover the Best of Granada With These Airbnb Experiences

Why Granada Is Our Favorite City in Spain

15 Andalucían Expressions To Know Before You Go To Spain

10 Must See Spots in Granada, Spain

Is Anyone Here Jewish?

Notes on an Old Woman Hiding in Plain Sight

How To Watch a Bullfight