If you find yourself in downtown Quito, Ecuador, there’s a good chance you’ll see a very large mural proudly illuminating the side of a tall, multi-floor apartment building — standing out in bright contrast to the muted colors of the city.

It’s an arresting image of a plant soaring towards a massive moon. An Indigenous girl reaches out as the seeds of precious corn plants fall beyond her reach, while a leaf pours the countryside’s water down to a thirsty city. At the base of the mural are distinctive Indigenous women standing among the plants and their mighty roots.

The mural is the work of Ecuadorian artist Raúl Ayala and Mona Caron — a Swiss-American artist whose work champions the people and plants that society passes by.

The resilience of weeds 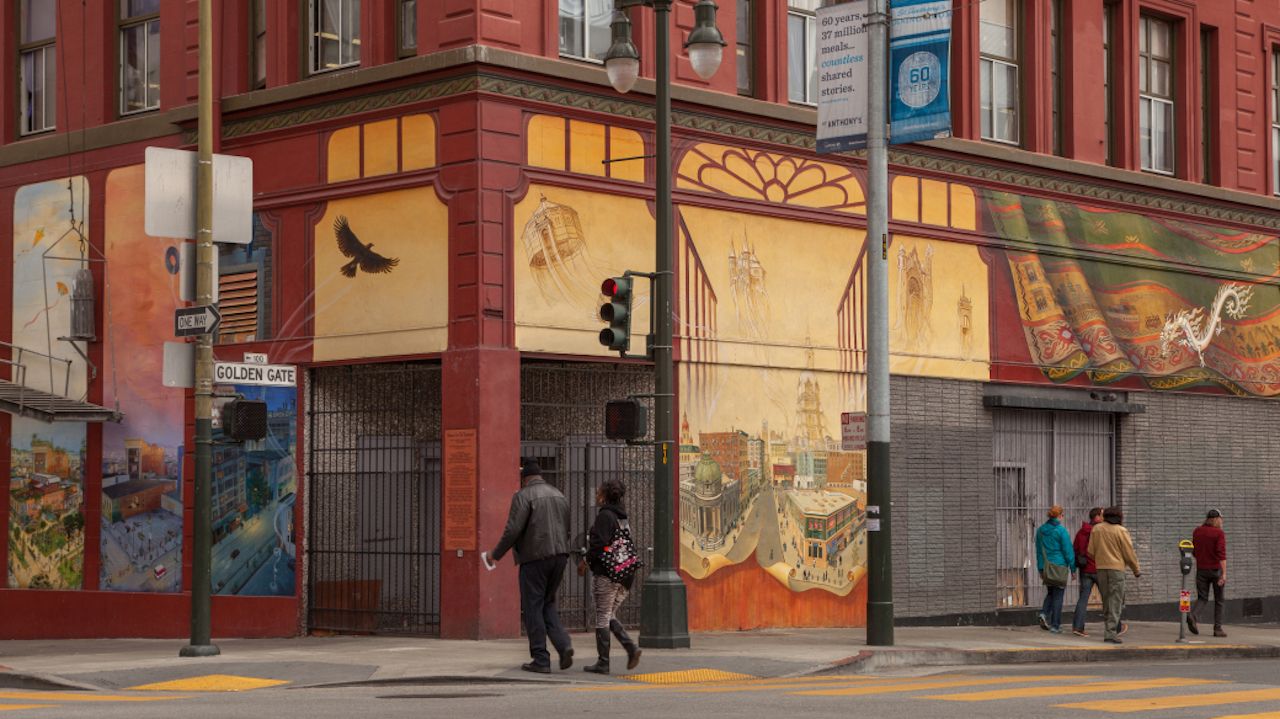 For years, Caron focused on the super-micro details of her adopted home in San Francisco, which is where I first met her — a short while after she’d first returned from Quito. By that point Caron had painted on several continents.

Caron’s earliest works in San Francisco focused on detailing life in a particular neighborhood, paying attention to the details — and, critically, people — that others overlooked. It was during the months-long creation of a mural in SF’s Tenderloin district that the seeds of Caron’s international work were sown.

“It was probably the longest project I’ve ever done, over a year. I portrayed like 300 real people in the neighborhood,” says Caron. “And while I was doing that, I was noticing these dandelions and plants growing at the base of the wall. And I kept noticing that people will periodically come around and just destroy them in this act of ‘cleaning up.’”

That absurdity struck Caron, who says that she worked surrounded by dirt during that time. “You’re in a place where there’s tons of dirt of all kinds,” she says. “But for some reasons, it struck me how people will go out of their way to identify that as dirt.”

What was more impressive, though, was that the removed weeds would always grow back. To Caron, those cracks emerging through the sidewalk symbolized the perseverance of the people she was profiling in her work.

“The way they keep coming back is actually the same thing I’m trying to illustrate in my murals there, which are about the resilience of people that are living in less than privileged conditions,” says Caron. “It occurred to me that these urban plants were a total metaphor for that.” 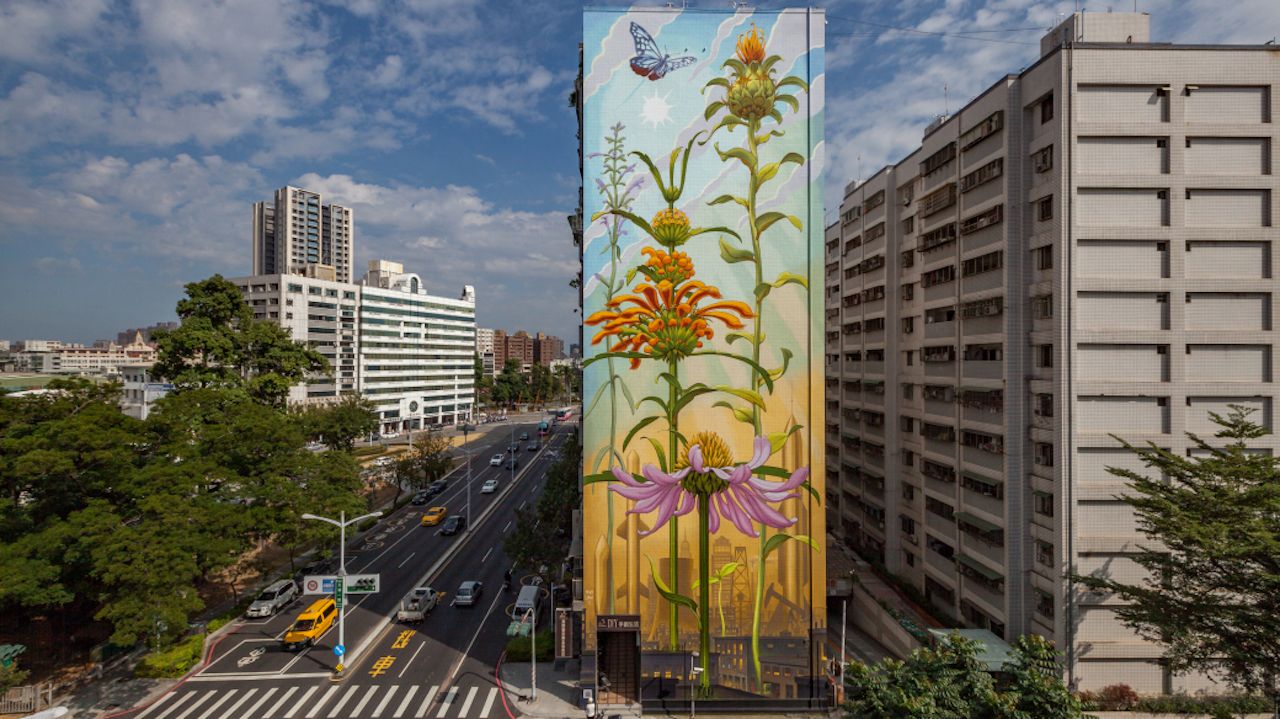 Inspired by the ability of the plants to keep coming back, despite efforts to remove them, Caron decided to create a frame-by-frame animation of a dandelion getting cut down and rising again. As Caron makes clear, the animations were her way of showing the act of reemergence, rather than, say, a commentary about invasive plants.

She posted her video on YouTube, where at the time she says she had just 17 followers. She was surprised then to find that it received 10,000 views, then double that number, then soon over 100,000 views.

Caron was startled at the reaction. “I started getting emails from all over the world saying, ‘We get your message. We are weeds too.’ And like, ‘This resonates with me.’”

One email from Baghdad showed pictures of plants growing there. Other messages came from Thailand, Russia, and elsewhere. Caron says she realized that these plants were a universal theme that transcended national languages.

Invitations to paint weeds decorating buildings or walls soon followed, the first one from a group in Brazil who told her they were seeking to thrive in the way that Caron’s weed had.

“We keep getting stepped on. But we’ll never give up. Come here and paint a huge weed in the Minhocão in São Paulo,” says Caron. “And so, I did a 13-story tall weed there.”

And the requests kept coming. “And all of a sudden I went from the hyperlocal, 10 years of being super, super local — with murals about not San Francisco, but a specific city block — to being global,” says Caron.

The Indigenous women of Quito 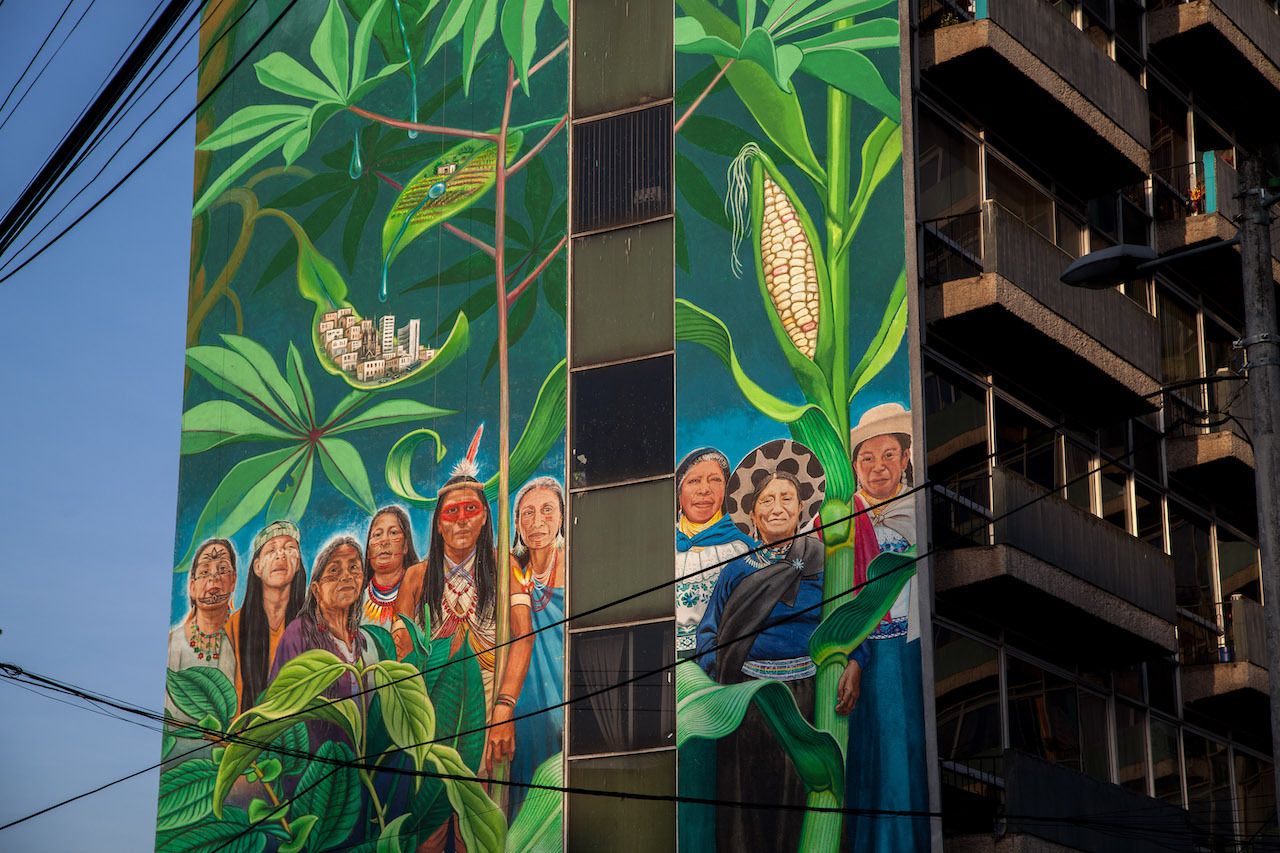 One of the most impactful of those global works was the mural in Quito — worth highlighting today, World Indigenous People’s Day — which occurs annually on August 9.

Caron got to know Raúl Ayala through activist work like the 2014 NYC Climate Conference, for which they painted banners in a Brooklyn warehouse. Later, Ayala was distressed by the “hypocrisy” of his home government leasing off Indigenous land to foreing mining and petroleum interests — and then offering to host a UN Conference on sustainable development.

Ayala hoped to organize a protest at the conference, but was informed that the conference would occur in a “green zone” that barred activists. After negotiating with conference organizers, Ayal was granted a wall to paint a mural within the green zone instead. And what a wall it was.

When Ayala sent Caron a photo of the proposed location for the artwork, she says she was shocked at its size. But Ayala was insistent.

“‘Can you believe they gave permission? We’ve got to take it, we’ve got to do it,’” Caron recalls Ayala telling her. The wall was in between the hotels and the conference center — making it perhaps the most visible wall in the green zone. Caron agreed.

To better understand their grievances and to tell their story, Caron interviewed specific Indigenous groups — six in the Amazon and three in the Andes — who were fighting to protect their lands and biodiversity. While the Amazonian women were fighting off mining and oil interests, the Andean women were trying to protect their dozens of native corn species from the monolithic, sterile seeds of the Monsanto Corporation.

Caron asked them about images that could serve as metaphors of their struggles, perhaps in the same way that a re-emerging weed illustrates the resilience of the oppressed. But those she interviewed had other ideas, insisting she portrays the very Indigenous women who had been waging these battles, sometimes for decades.

This created a dilemma for Caron. “They insisted on having these specific persons in it. I said, ‘I cannot possibly, as a White woman, paint portraits of you,’” Caron recalls.

She came up with a solution, asking the women to travel to Quito to paint their own traditional face markings. It was a pretty brilliant idea — given that the women came and participated in the project while the conference was taking place.

Voices that need to be heard 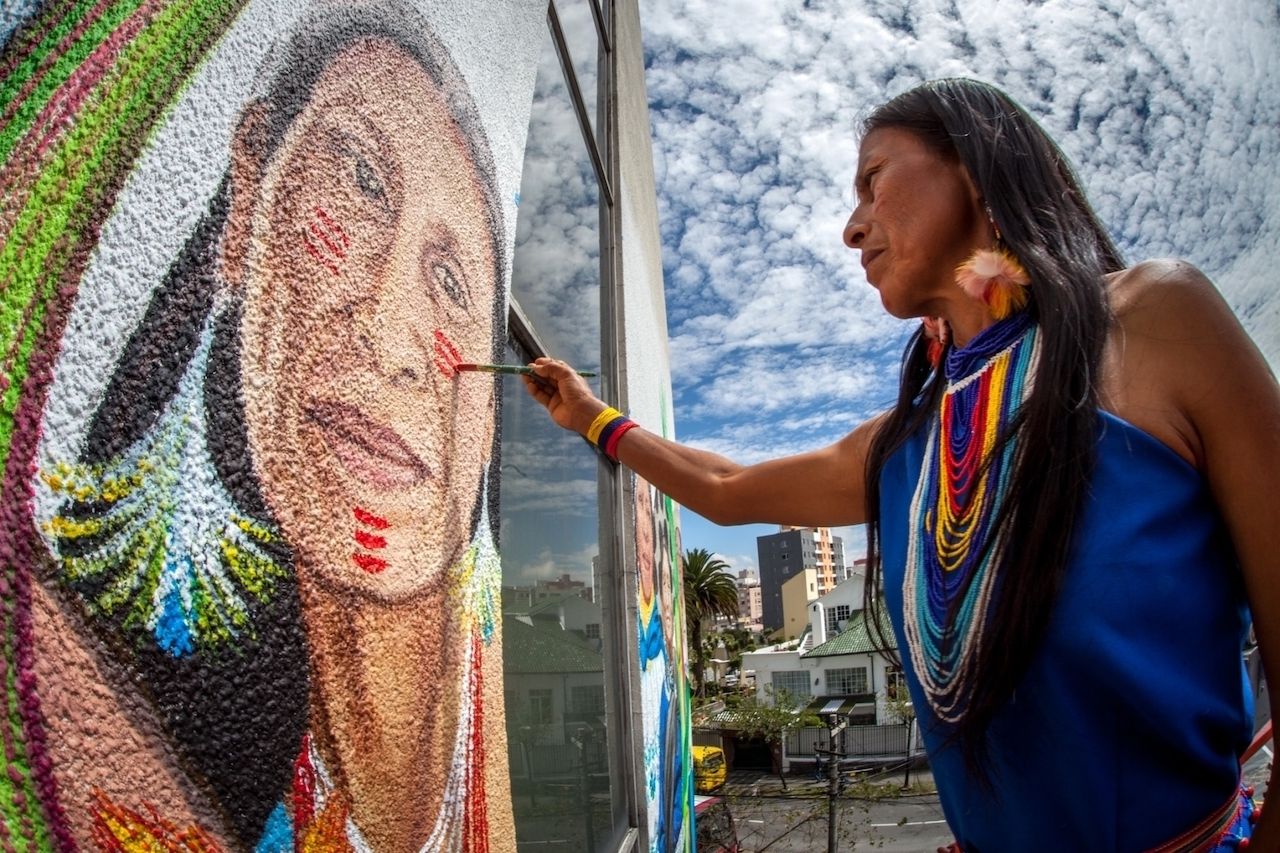 Journalists passing by the mural on the way to the conference noticed the women at work, painting. They’d stop to inquire what was going on, hoping to speak to Ayala or Caron.

Although the struggle in Ecuador, as in other Indigenous lands, is ongoing, there’s no doubt about the visibility granted by the Mujeres (women) mural. We’d like to think it had a role to play in a July 2020 ruling by Ecuador’s high court stating that Indigenous peoples should have sovereignty over their ancestral lands and should be consulted on decisions that could affect them and their lands.

Caron has continued to elevate the voices that need to be heard. She completed another project in São Paulo last spring, in an area called the “Marginal,” which she says is very much on the margins of society — a location most people from the center of the city have never visited. Painted along with artist Mauro Neri, the mural depicts a strong young woman holding a sailboat, and symbolizes how the community there has taken control of the lake by their homes and made it theirs.

And just last week, Caron put the finishing touches on a mural of a native wild plant called the Joe Pye weed in Jersey City, New Jersey. It’ll be visible across the Hudson from New York City, but it’s worth getting up close to check it out. As Caron wrote in her Instagram post about it, the mural represents, “A dream of Nature winning, of plant life being the one towering over us for a change, putting us back in our place.”

Lessons from the jungle: a week with an Amazonian tribe

The 12 most incredible underwater environments on earth

5 stunning Quito viewpoints not to be missed